Yeah, I know it’s a catalog.

One of the byproducts of the timing of DC’s recent Rebirth announcements (click here and here) was that the publisher wasn’t included in the latest Diamond Previews catalog. Instead, there’s a special DC Comics Previews this week that also works as a de facto handbook on what’s to come when the publisher hits the refresh button in June.

There will be some teases and revelations, and it’s extremely useful to have something tangible you can peruse while thinking about the books you will — or won’t — be picking up.

Naturally, since our favorite shadowy vigilante is the company’s top draw, DC Comics Previews will focus a lot on what’s happening in Gotham, with plenty of descriptions and art.

I know many people are cynical about reboots and restarts and rebirths and rewhatevers but I find the whole thing pretty exciting overall. I don’t know if that makes me an optimist or a sucker. (Don’t answer that.) 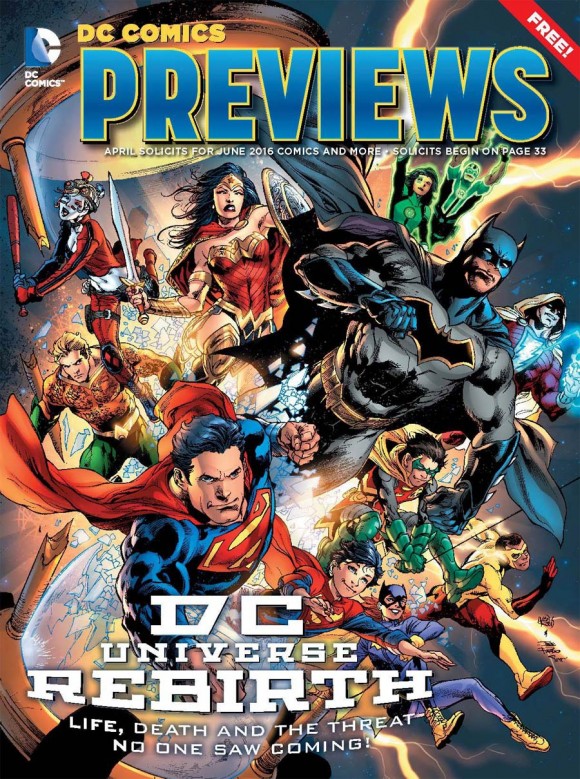 — Catwoman-as-crime-boss was a misstep, so I’m glad Selina’s running around capering again. Catwoman #51 is out this week, as we draw closer to the end of her New 52-era run.

— There’s also Harley Quinn and Her Gang of Harleys. I’m never sure whether to lump Harley in with the Batbooks or not, but there you have it.

— Probably the best actual Batman read this week is Batman: Europa, the hardcover collecting the recently completed mini that sent the Dark Knight all over the continent with the Joker in tow. A very cool, very pretty complete-in-a-bubble Bat-tale.