This could be the tipping-point issue.

OK, it’s been a couple months since Dark Knight III #2 came out and this is likely where we’ll get a sense of whether this is a series deserving of long-term accolades.

(By the way, be sure to check out G.D. Kennedy’s new interview with Brian Azzarello and Andy Kubert, here)

The scorecard so far: I thought the first issue was mediocre but I liked the second one.

I’m not sure what to take away from the delay leading into the third — if anything — but this is easily the book I’m most curious about this week. 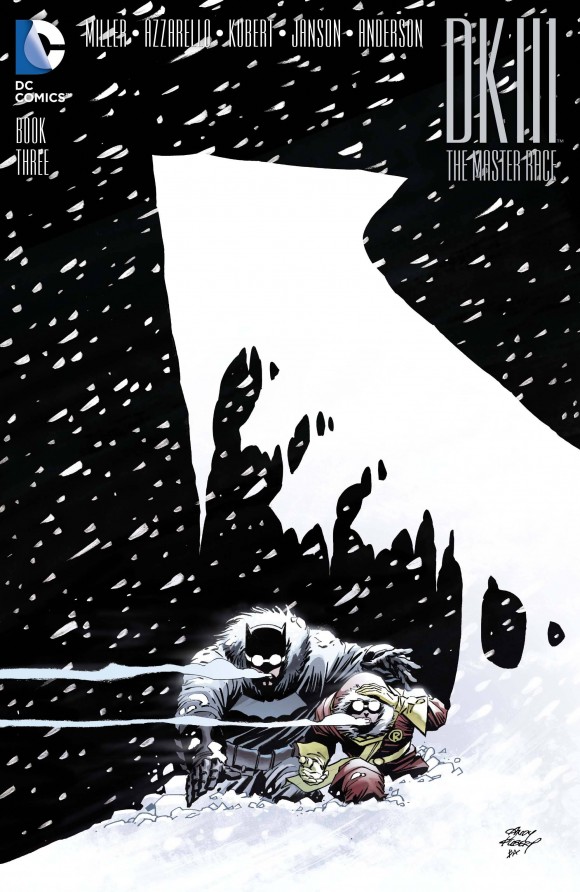 In a way, though, this book is now more intriguing than any other Batbook on the market overall, with the exception of the main Batman title itself. With the formal announcement of Rebirth last week (click here for more on that), we’ve now basically been told that all these other stories and situations we’ve been following for the last 8-9 months or more, are pretty much on the fast track to the finish line. I don’t think it’s unreasonable to surmise that most of those stories will end up being a lot of sound and fury, signifying nothing, or at least very little.

This was kind of how I felt the summer before the New 52 in 2011: We’re now entering that biding-time phase. Though, as I always like to say, a good story is a good story, and that can – and should — diminish the impact of external forces.

Nevertheless, that’s why an extracanon book like Dark Knight — which was already a magnet — is now even more interesting. It exists in its own world and will unfold in its own way, for better or for worse.

ALSO ON THE BATSHELVES THIS WEEK: Speaking of those Dead Titles Walking, we’ve got Batman and Robin Eternal #21 (which was going to end at #26, anyway); Grayson #17; and, Justice League #48. I think this is where I jump off We Are Robin. Neat idea, but I never warmed to it and it’s not among the announced Rebirth titles. I’m sure if something significant in the Batverse happens in the book in the next few months, I’ll be able to catch up.