DARK KNIGHT III: Behind the Scenes With Azzarello and Kubert

Home » BATMAN'S HOT-LINE » DARK KNIGHT III: Behind the Scenes With Azzarello and Kubert

With Dark Knight III #3 coming 2/24 the “new kids” reflect on working in the light of giants.

It doesn’t seem like it’d be a Dark Knight project without delays. Even back in 1986, Frank Miller’s magnum opus suffered from late shipping.

Not that it matters. A project like this doesn’t need to adhere to a 30-days-or-bust schedule. I mention this only because I’ve been holding back on this interview for a little while, waiting to pounce when the next issue comes out, which is this week.

My comrade in comics G.D. Kennedy and I interviewed the creative team behind DKIII recently. I spoke with Frank Miller and Klaus Janson while he spoke to Brian Azzarello and Andy Kubert. The Miller/Janson aspects you’ll see in due time.

But with DKIII #3 finally upon us, Azzarello and Kubert reflect on their roles in one of comics’ biggest projects. 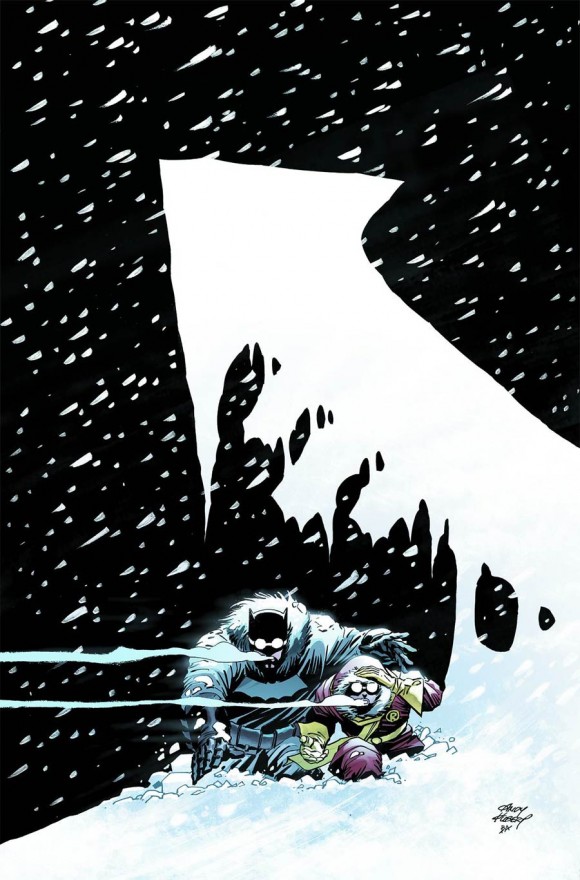 G.D. Kennedy: We’ve talked to a number of other creators about the moment when they first read The Dark Knight Returns and what pulled them into it and made them kind of fall in love with it. (Click here.) Was there a moment when you first read the stories years ago that really grabbed you and brought you into this world that Frank and Klaus had created?

Andy Kubert: Well, I think we both read them when they were originally coming out, right?

Kennedy: Was there an element of the story that really grabbed you at that time?

Kubert: Not just unique in that Batman’s an old man but unique in how it’s presented. The storytelling and narration and all that stuff.

Azzarello: Yeah, I mean, the format.

Kubert: That was the first time that DC used that prestige format. … It was a totally new concept. It’s kind of neat that now this one has the mini-comic and that was his idea. Frank’s idea. 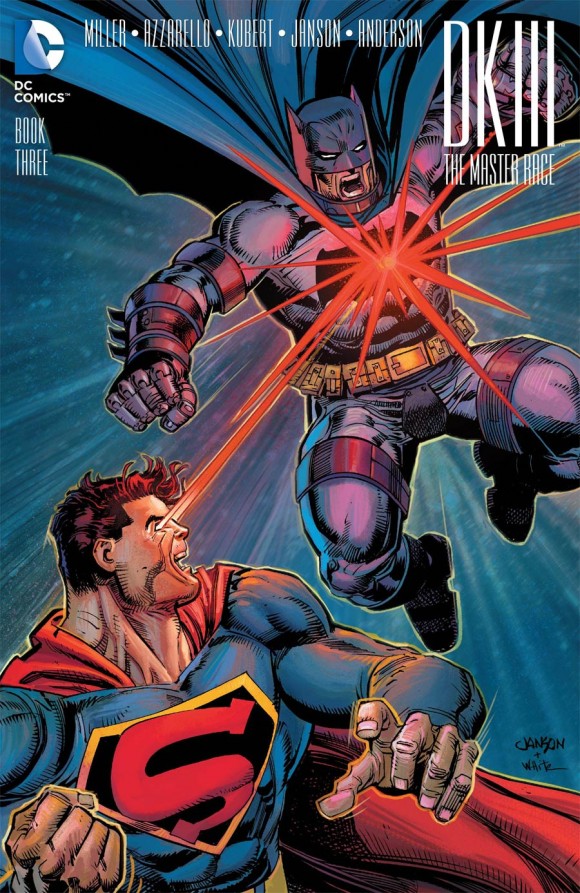 Kennedy: So obviously there’s a large number of creators involved in the process in the new one and everybody’s very established in their own right. What’s the process been for integrating with Klaus and Frank, and what are the different roles that everybody has taken on to accomplish this?

Azzarello: (Laughs) We’re along for the ride, man.

Kubert: I keep goin’ like THIS. (Makes a sound and gestures as if is his head’s exploding.)

Kubert: We’re still . . . can we pinch each other? I can’t believe we’re doing this! It’s amazing!

Kennedy: It’s interesting you say that. I recently was reading an interview with Frank and one of the things he said was he said that you (Azzarello) are making this your story vs. his dictating this to you —

Azzarello: He’s dictating. (All laugh.) Maybe more then he believes. More than he’s letting on. I mean, we came up with stories for that about a year ago. I was going over to the studio, could be every day for a while. He’s throwing out all these, like, moments and stuff. It was like puzzle pieces.

Kennedy: So he kind of put the puzzle pieces out there and you arranged them?

Azzarello: He’s like, “I want to do Dark Knight III. It’s called “The Master Race.” Oooo-kay. (All laugh.)

Kennedy: What was your reaction to that title? 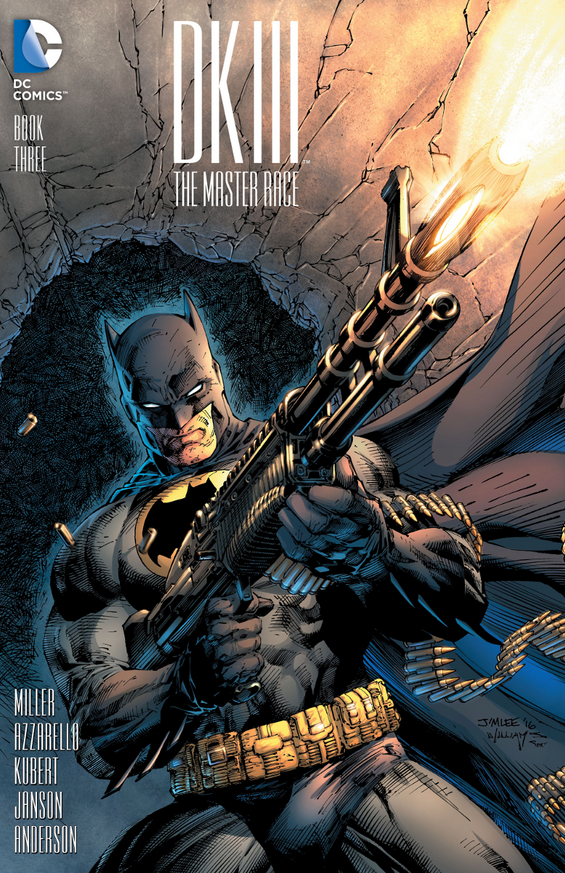 Kennedy: How would you view this book as separate, apart from the prior versions of the Dark Knight? How are you giving it your own kind of stamp as opposed to simply progressing from the other ones?

Azzarello: I don’t think we cannot, because we’re doing it.

Kubert: I just think what we’re doing is – well, for me, and I think I can speak for Brian, too – we’re both influenced by what was done before, but we still interject a lot of our own stuff into it. It’s kind of an interesting mix, you know? I think it’s working out a lot better than I could have even imagined, honestly. I didn’t think it would work out this way. I think it’s seamless. I think it’s working out really, really well.

Kennedy: What are some of the elements that you think have worked out better than expected?

Kubert: Just the basics. The storytelling, the story itself, how it’s being told, how it’s being perceived. Everything. It just came together. This is just me speaking on my own, but I kind of want to lock it into a bottle, you know, and keep it, because it’s actually working out so well. I don’t want to talk about it too much because I don’t want to jinx it! (All laugh) Seriously, it’s great. It really is great.

If you’d told me 30 years ago I’d be working with these two gentlemen over there (indicates Miller and Janson) I’d tell you, “You were out of your mind.” (All laugh.) 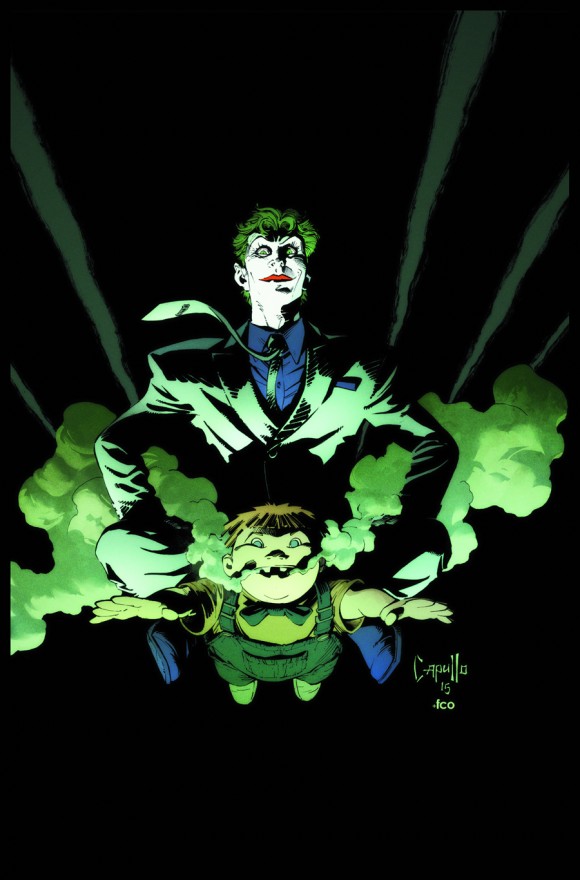 Kennedy: So this is kind of a career pinnacle?

Azzarello: All those years ago when I finished reading the first Dark Knight, if somebody had said, “You know, you’re gonna be working on the third one 30 years from now,” I wouldn’t have believed it. There’s no way.

Azzarello: I wouldn’t say that they’re passing anything. She’s just taking it. (Laughs)

Kennedy: So, why do you say she’s taking it vs. it being passed to her? What was the impetus for that?

Kennedy: And so are you using them kind of as a mirror to each other?

Azzarello: I don’t know a mirror. One’s rebellious and the other one wants to please her father. And it’s not the one you think would be rebellious who is the rebel. 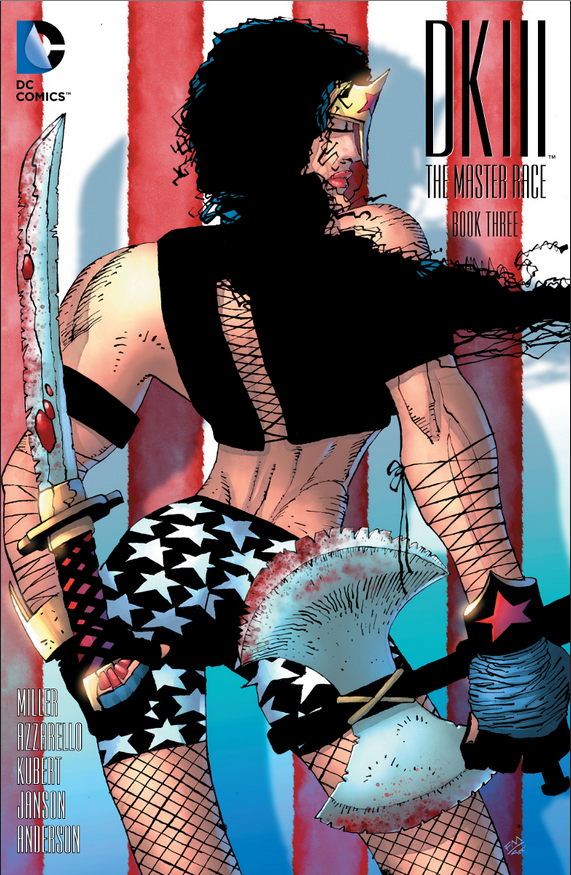 Kennedy: One of the things I found interesting, in the very last scene of the second issue, Kandor shows up. You have a group of immigrants with a very strong religious background projecting a threat of violence. I think one can suggest a very real parallel to what’s presently going on in the world. Is this something that you intended and is this something that, given developments since this was first announced, changed your view on the issue?

Azzarello: No, it’s been in it from the beginning that there was a cult in Kandor. So that’s nothing new that we’ve interjected. But, again, the real world is a character in the Dark Knight universe, so what’s going on around us is reflected in the story. It was that way in the first two and it’s that way in this one.

Kennedy: Looking at the world around you, do you feel differently about how the story is progressing now or is it something that you feel has a different impact?

Azzarello: Uh…. No. Kind of… It gave me pause for a second but then I would just say, “We have to keep going full ahead with this.”

Kennedy: Is there anything that about the book that you guys haven’t talked about today?

Kubert: I did have a thought in my head but it went out. (Laughs) I really did! I mean, we’ve been talking about working together for years.

Azzarello: And now we’re on this.

Kubert: And now we’re on this. How’d that happen? (All laugh) Also, the way Brian works … When I read his scripts, I can tell he agonizes over the things. He’s like, “Make sure everything –” That’s the way I work.

Every little thing, every little panel design, I make sure it’s all as good as I can get it, and I can tell he’s the same way. When I’m working with somebody like that, it’s bliss! When we bounce ideas back and forth and he makes comments on my stuff, like, “Yeah, that’s great!” Like in that spot in the second issue, with the hand getting in Carrie’s face. We were sitting … and I just drew it out. I was thinking of this for a layout and [Brian] goes, “Why not just that?” And I go, “It’s genius! How about I just do that? It’s perfect!” (All laugh) It’s working out really well. 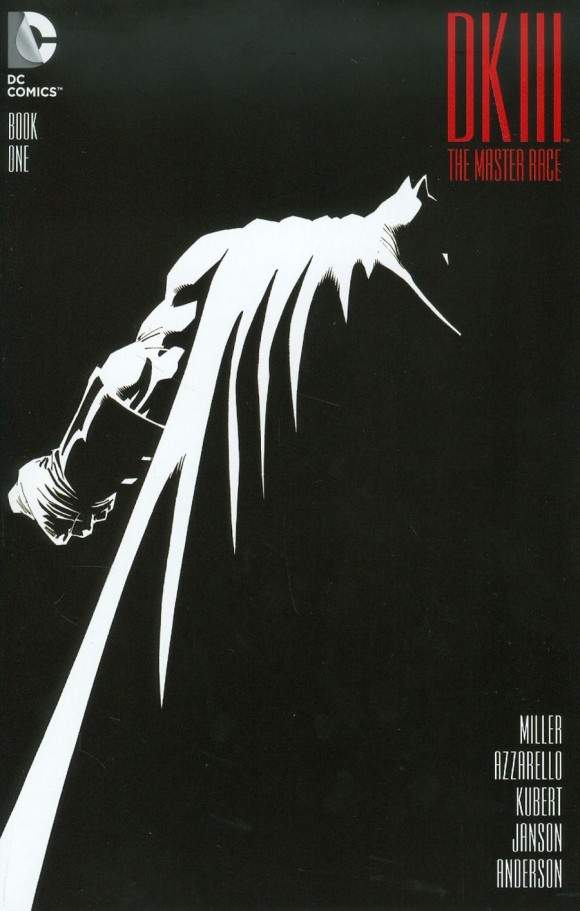 Kennedy: Are you a fan of a very detailed script?

Kubert: Honestly, I am so happy. The way Brian’s writing this is perfect for me. There’s just enough there. Sometimes he won’t even put in a panel description and I’ll go off the dialogue. And that is perfect. I’m not hindered that way. I can interject a lot of myself. So the way he’s going about, it is just absolutely perfect.

Azzarello: I don’t want to overwrite any of his stuff.

Kubert: And I love interjecting myself into it. Otherwise I feel like my hands are tied.

Kennedy: Frank had a very unique style in the first two Dark Knight books. Have you tried to emulate it at all?

Kubert: Honestly, as I said before (laughs) I really don’t know what I’m doing. I’m doing it the way I see it and the way I think it should be done. In the beginning, the feedback that I got from these guys really set me in the right way. It got my head on the right path, because I was all over the place and they narrowed it down to what it should be and from there I just saw it. When I read a page of script from Brian, I can see it immediately and that’s great, you know? In the start, when I was first starting, I saw it this way, I saw it that way. It was all over the place. But now it’s zeroed in. 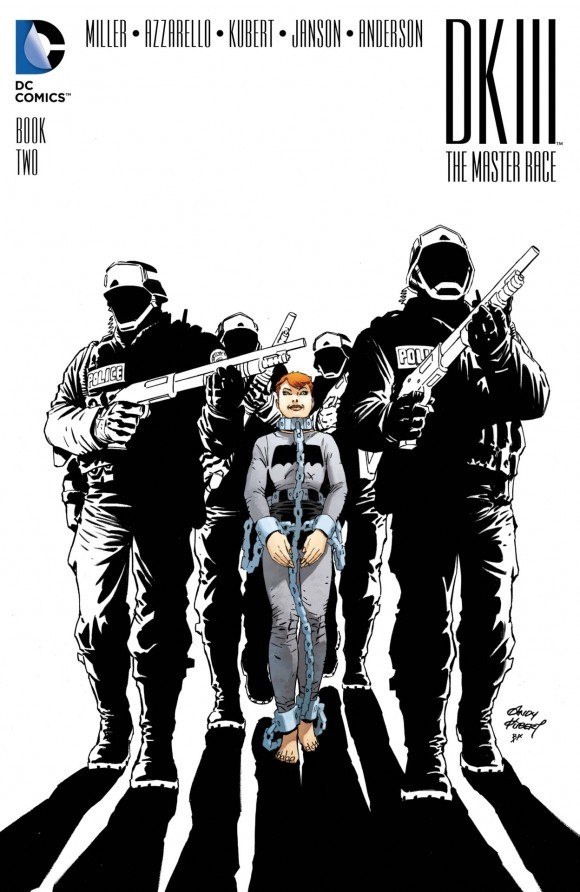 Kennedy: It’s coming together and it sounds like everybody’s really happy about the way the thing’s kind of congealed at this point and really brought itself to a head.

Azzarello: It’s exciting to be going through this!

Kennedy: I’ve read an interview where Frank has concepts for a fourth book in the future. Is this something you have talked to him about?

Azzarello: We’ve talked. (Laughter) I mean, it’s… Yeah, we’ve talked about it. I was just over there this morning. As we are talking through different things that are happening in the current series, it’s like, “This would be good to comment on at another time.” But that’s as far as… It’s up in the ether but it’s there.

Kennedy: Would this be something that you would expect the current team to be involved with or is that far too out…?

Azzarello: No idea. No idea, man. You’re getting way ahead, yeah.

Kubert: I’m just happy I’m on the third one. (Laughs)