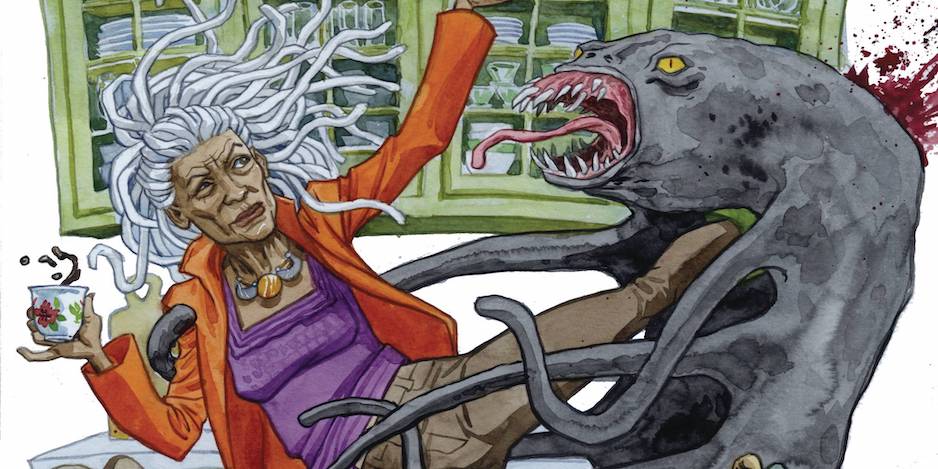 Y’know, not all wizards are boarding-school kids. And not all superheroes are forever 29, with perfectly toned bodies without an ounce of fat.

Sometimes heroes can be two proverbial “little old ladies” who are tasked with, well, saving the world.

AHOY Comics’ Ash & Thorn — by Mariah McCourt, Soo Lee and Pippa Bowland, with covers by Jill Thompson — runs with that concept much like other titles from the boutique publisher do: with intelligence, wit and irreverence.

The first issue is out now, Issue #2 is due in shops July 8 — and comics editor Shelly Bond is here with series writer McCourt to take you inside the out-there world of Ash & Thorn, along with some preview pages: 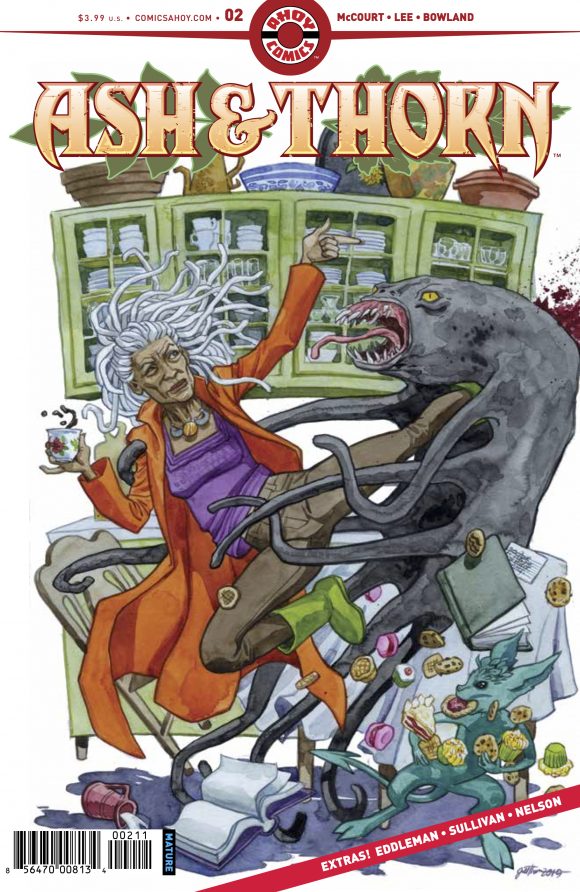 Shelly Bond: I have the pleasure of knowing you’re an ardent fan of high fantasy. How much did Tolkein and Ursula K. Le Guin play into building the foundation of this story?

Mariah McCourt: Definitely a bit of Tolkien and Le Guin in terms of some common fantasy tropes. And I then veer way off into cosmic horror and other strangeness. I mixed up a lot of genres and influences for this, some more obvious than others. And some I’m probably not even aware of, too!

Shelly: Not unlike Rick & Morty, the characters Ash and Thorn aren’t quite the usual age, race or anything of traditional comic book protagonists. How did you decide on their specific ages and ethnicities?

Mariah: Well, I love older protagonists and I’ve always wanted to tell a story about them saving the world. I’ve been lucky enough to work on a lot of books with a variety of protagonists. But I do think we need more older characters in comics, especially as main characters, and as a writer it’s refreshing and challenging to have to come at them from less typical character development places.

There’s also some subtext going on about things I’m specifically frustrated by that come out in Lottie and Peruvia’s characters and relationship. Mostly in what we expect “heroes” to do, how little we appreciate every day heroism, and the dynamics of power.

Shelly: Is Lottie short for Charlotte?

Mariah: It normally would be but in this case, it’s just Lottie! 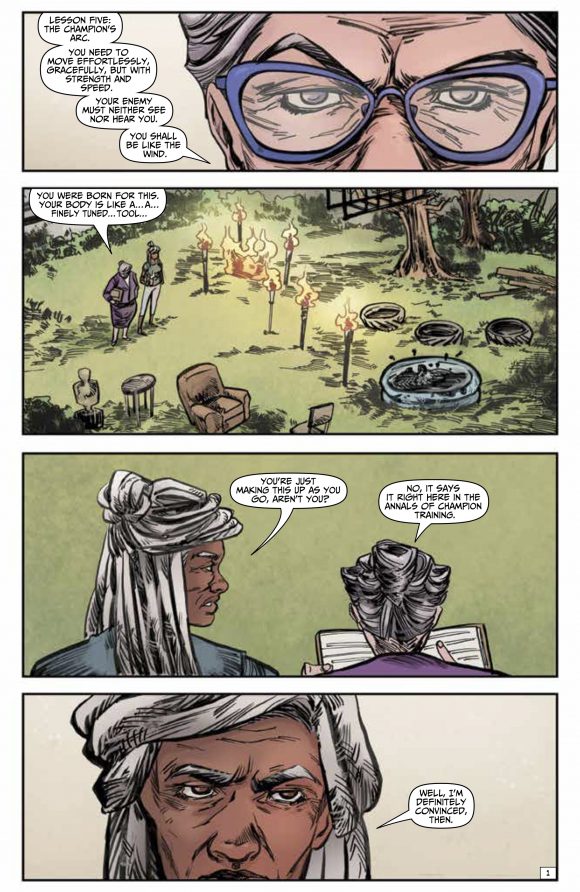 Shelly: Who is her favorite novelist?

Shelly: Peruvia. Is that her first name or last name? Is this the titular Ash?

Mariah: Her full name is Lady Peruvia Ashlington-Voss, which is where the “Ash” comes in. I wanted her name to be somewhat absurd the way a lot of old British names can be.

Shelly: Who is her favorite musician?

Mariah: In several of my story worlds “Thin Time” is a recurring concept. It’s literal and figurative, when time is “thinner” between realms and realities. “Thin Time” allows for all kinds of things to happen depending on where it’s taking place. A lot of my stories have breaks in reality and perception and this is a kind of unifying way of discussing it. 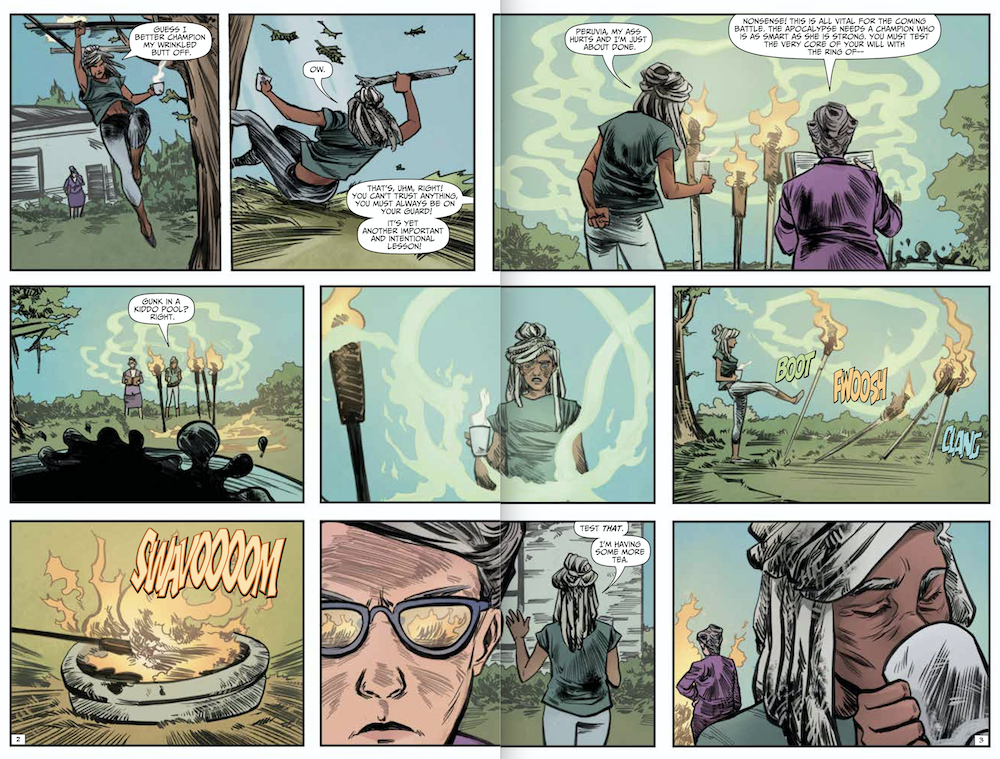 Shelly: What was the student Sarah coming to Lottie’s house to learn? Is Lottie a teacher? A pastry chef?

Mariah: Lottie was a high school art teacher and private art tutor. Now that she’s “retired” she still teaches a few select students, like Sarah, who also views her as a friend and family. She’s been teaching Sarah oil painting and a bit of scone baking, too.

Shelly: When you pitched the series to AHOY, what was the 10-second log line that made them sit up and take notice?

Mariah: Little old ladies save the world! That pretty much did it.

Shelly: From a glance, it looks like you and artist Soo Lee have been working together for years. There’s an ease and a chemistry that leaps from the page. It’s your first issue! Usually when a team clicks, the synergy emerges in Issue #3. Explain!

Mariah: I think that’s all Soo, really. Somehow she takes my scripts and makes them 1000% better and is able to move effortlessly between horror and humor, intense emotions and sarcasm, not easy things to capture in a comic. She just “got” this series from the get-go and I’m so lucky to have her on it. 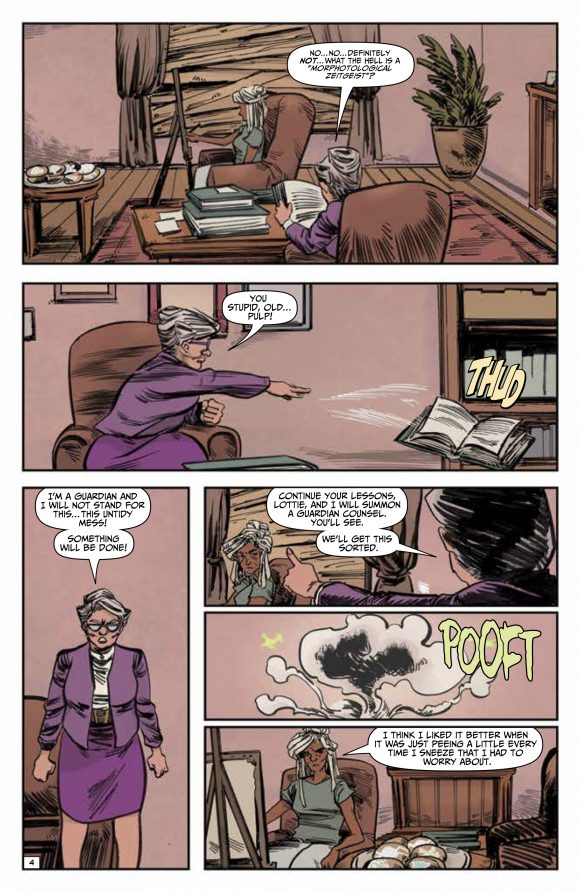 Shelly: What surprised you most about working with Soo Lee?

Mariah: Mostly how easy she made it all look! Getting pages was a delight and her energy and pacing is always spot on. It gives the book both a grounded and adventurous feel, with lots of movement and nuance.

Shelly: Multiple Eisner Award-winner Jill Thompson painted a gorgeous cover for your first issue, subverting all expectations about what it means to have a nice cup of tea. Will she be doing more covers and how did you convince her to join this solid all-female creative team?

Mariah: We got so lucky because Jill has done all five covers and every one of them is perfect. My personal favorite is #3 for a bunch of reasons but they’re all incredible.

Shelly: The best reaction from a reader is either 1) Can I have the next issue right now?! or 2) What else can you tell me about the main players?

Answer one of the above.

Mariah: Lottie and Peruvia have an “odd couple” kind of vibe and it’s going to get more and more complicated as the series progresses. They reflect a lot of things I personally struggle with and I hope that people are able to get something out of that relationship. Something about who we listen to and why, and what real heroism actually looks like. 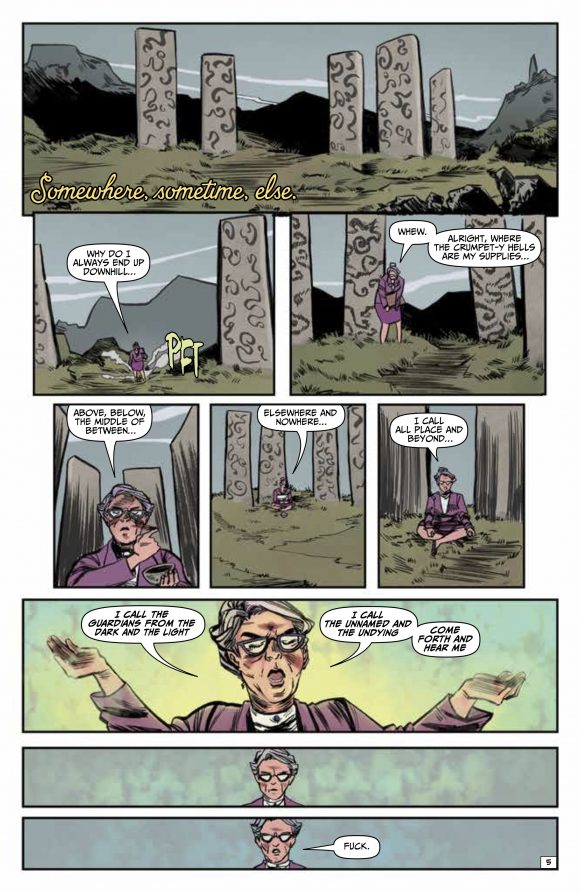 Mariah: Peppermint Life Savers, embroidered handkerchief, a pinch of lavender to keep moths away, and a pencil.

Shelly: Where is the setting? Small town USA?

Shelly: What does Lottie have to lose or gain if she upholds the family tradition and becomes the eternal champion?

Mariah: At first, it’s just about the immediate threat of the end of the world. But as we go, the legacy of the champions, the full consequences of who they are and what their purpose is, are catalysts for Lottie and what kind of champion she’ll be. Because unlike those before her she’s not young and impressionable and easily molded into what someone else thinks she should be. For Lottie it’s less about “if” she’ll do what needs to be done but how and what the consequences will be. 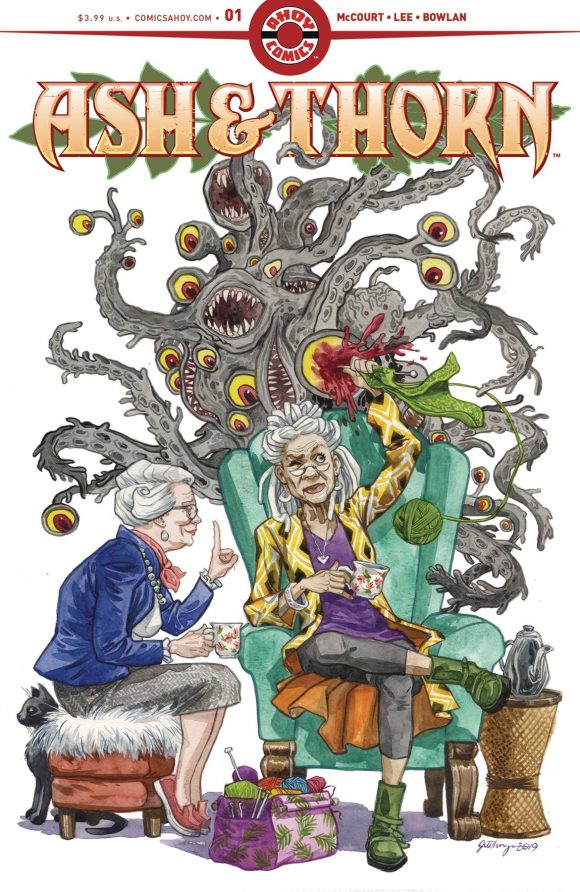 Shelly: How many pages are in Peruvia’s book and what’s on the penultimate page?

Mariah: Since it’s a mystical compendium it doesn’t quite exist in one reality or another so the page count is, in some ways, infinite. But on the penultimate page there’s a very detailed and sweet illustration of a hedgehog followed by a much less pleasant prophecy about what that particular hedgehog portends.

Shelly: What’s your favorite action to art direct in an issue that follows this impressive debut?

Mariah: In the next issue, Peruvia decides she needs to have a discussion with the other Guardians and discovers that things are even worse than she thought. The way it’s executed is, I hope, unique and unexpected. It was especially fun to introduce a new character in the scene, Pickle. 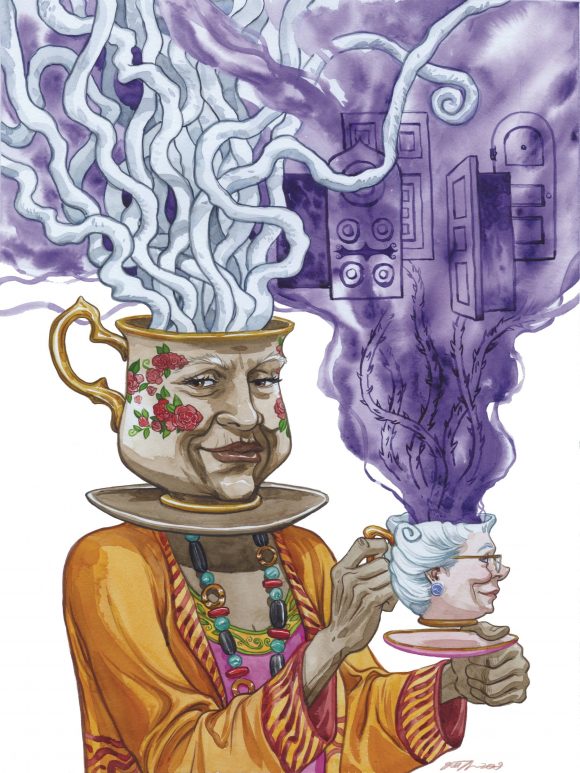 Shelly: What’s the special ingredient that went into that pie and what’s the expression on Lottie’s face that we don’t see because we’re looking over her shoulder?

Mariah: Lottie always adds fresh orange zest to her berry pies to liven them up a little, especially if she’s using out-of-season fruits. She also adds a pinch of cardamom and ginger. The secret, secret, ingredient here is that one of Lottie’s champion abilities is channeling prophetic dreams and visions and that ends up coming out in her baking, too.

Shelly: My favorite line references “intestines on a hat.” Is this a clue to something sinister? I saw neither intestine nor hat. Then again, I’m as old as these characters so maybe I need glasses!

Mariah: Haha, so, you caught a line that we did fix for print because I realized we didn’t have hat/intestines showing. The revised line is about her shoes and for some reason it’s funnier when you can’t see it!