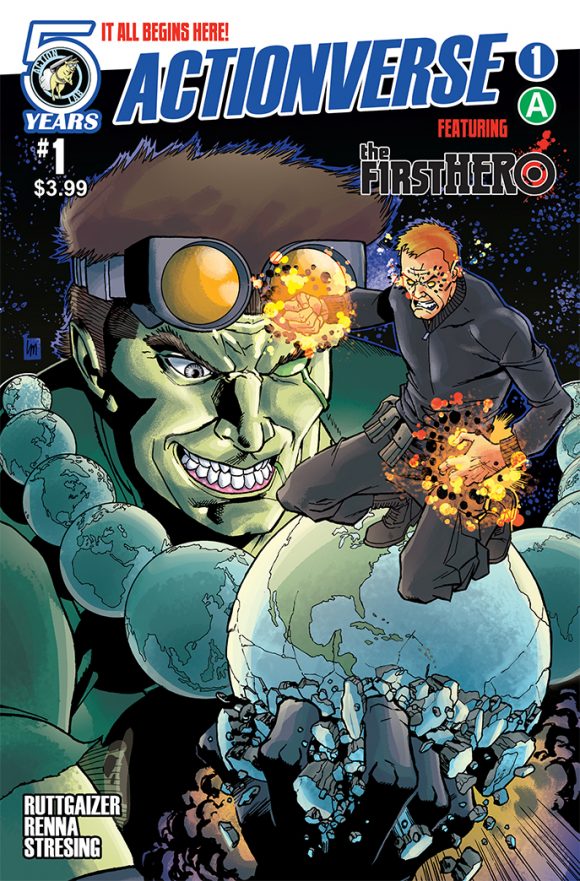 Action Lab is celebrating its first five years as a creator-owned label with a wide-ranging adventure that brings together its mainstay characters, such as Jamal Igle’s Molly Danger; Vito Delsante and Sean Izaakse’s Stray; and Anthony Ruttgaizer’s F1rst Hero. 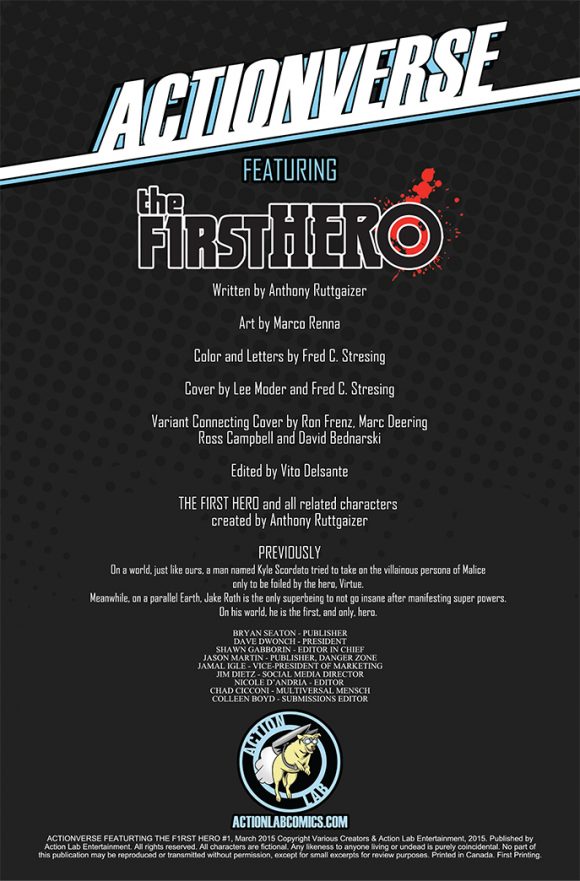 Possibly the most obscure, but longest running, title in Action Lab’s Actionverse line is The F1rst Hero by Anthony Ruttgaizer. With two completed volumes and a third to begin shortly after Actionverse ends, we sat down with the Toronto-based writer to talk about where his lead hero, Jake Roth, has come from and where he’s going.

Vito Delsante: OK, Anthony, you’re the guy starting this whole shebang. You are the creator of The F1rst Hero, and you have the first issue, so let’s start off simple. Who is Jake Roth?

Anthony Ruttgaizer: Jake Roth is a man trying to make a positive impact on the world around him. He’s a wealthy kid who grew tired of the rich-kid lifestyle and joined the Marine Corps to turn his own life around. He’s also the first person to ever get superpowers and not be driven insane by them. Now, back home on American soil, he wants to use those powers to stem the growing tide of war and bridge the gap between humans and so-called “extrahumans.” 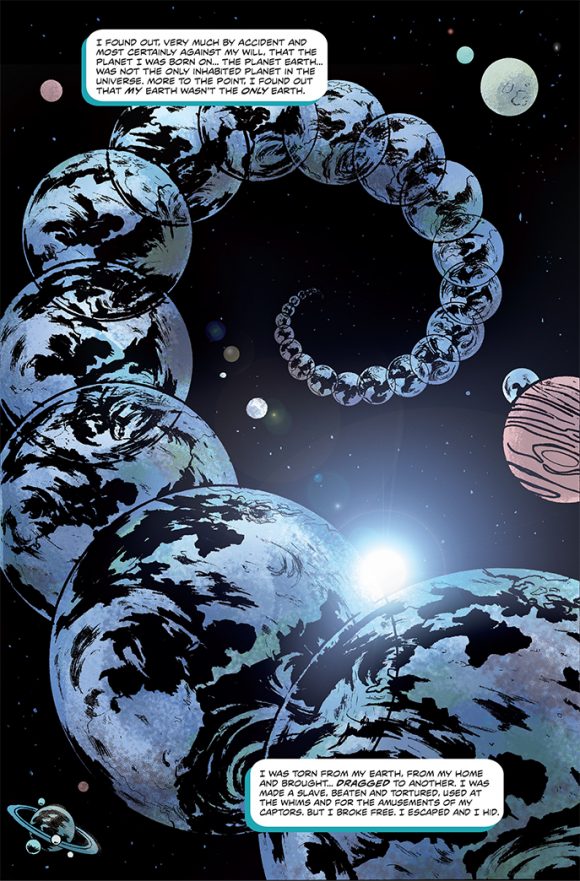 Vito: In a nutshell, and without spoilers of course, what can you tell readers about the events of Volume 2 (titled, Fight For Your Life)?

Anthony: At the start of Fight For Your Life, Jake is still reeling from the events of Volume 1 (The Monster). Some of his former rich-kid party friends re-enter his life and immediately get Jake embroiled in an “in-way-over-their-heads” situation involving the local mob and a three-armed extrahuman psychopath named Odinson.

Vito: You start the relay race that is Actionverse. As a former pro wrestler, you’re used to challenges, I’m sure. How challenging was this? Especially in light of the fact that you pretty much do F1rst Hero on your own.. .was it difficult to work this closely with your fellow Action Lab “scientists?”

Anthony: It’s like being in a massive tag-team match. The creative teams of five different comic books, all working together, tagging in and out, to weave the plot of this huge story. The collaboration was actually very easy. There was a basic idea for Actionverse when I came onboard but the very nature of The F1rst Hero meant that aspects of that idea needed to change. The group was very welcoming to me and open-minded about some wholesale changes my inclusion in the project would necessitate. My only complaint might be the literally thousands of “Reply All” e-mails that would eventually clog my inbox. HA! 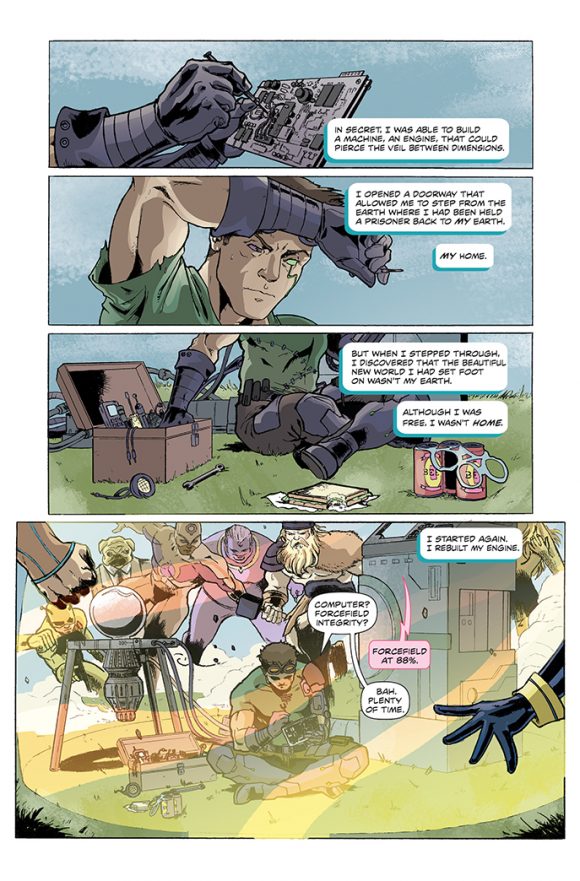 Vito: Getting into the specifics of the issue…one of the other things that must have been challenging is you dealt with a character, Kyle (from Fracture), that is not only not your creation, but you had to add a bit of backstory (and, especially, motivation) to him. How did you approach this?

Anthony: I was very pleased with the opportunity to take a character with an established canon and add to his story. The original Actionverse story was mystical and very grandiose. Not that that was a bad thing but if I did anything to Actionverse, it was to narrow the focus of our villain and simplify his motivation to something more relatable to the readers. Kyle wants to go home. He wants to go home and he doesn’t care what he has to do to get there. Writing Kyle was a fantastic amount of fun and I really have to thank Shawn Gabborin and Chad Cicconi for creating such a terrific character and allowing us all to tinker with him. 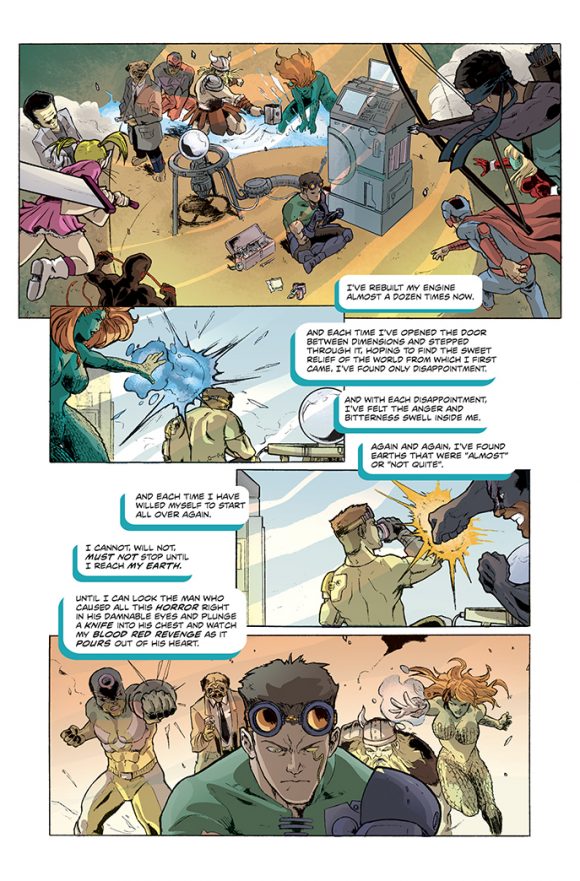 Vito: Kyle seems to wipe out a world full of…well, familiar analogs. You came up with names and looks for all of them, didn’t you?

Anthony: Yes, I did. Amongst them are a scientist with an enlarged skull named Dr. Brains; a hammer-wielding Norse warrior named Viking God; and a sightless archer named Blind Luck. I will very likely do a Blind Luck one-shot at some point. Maybe something with him and Princess Kitty Cat with her gigantic, anime-inspired energy sword.

Vito: Joining you on art duties for this issue are Fred C. Stresing, your frequent collaborator on colors and letters, and a new artist, Marco Renna. How’d you come to find Marco and choose him for the project?

Anthony Ruttgaizer: I found Marco the same way I found my Volume 1 artist, Phillip Sevy: an exhaustive search of DeviantArt.com. There are great artists out there waiting to be discovered. Phil is now doing great stuff for Top Cow and I’m certain that, after Actionverse and The F1rst Hero: Wednesday’s Child hit stands, Marco will find himself in demand from the greater comic-book world as well. And Fred. Fred is just incredible. So versatile. I’m hanging onto that kid for as long as I can. He’s an amazing talent. 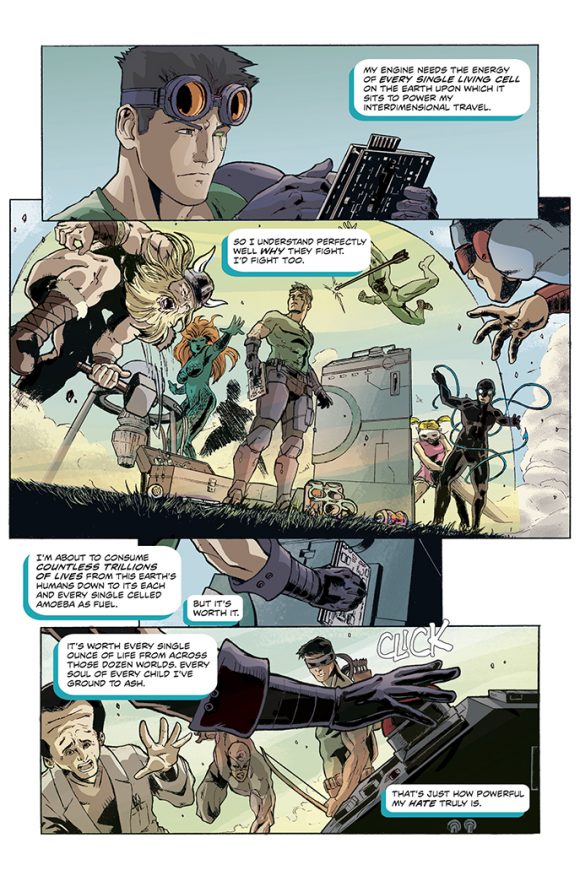 Vito: When we end Volume 2, Jake is seen riding off…well, not quite the sunset, but into the dark. When we see him next, in Actionverse, he is fighting a gentleman who can make duplicates of himself. Is it safe to assume that this isn’t the only “extrahuman” Jake has encountered between the two books?

Anthony: That is indeed safe to assume. As more and more extrahumans make their way to Philadelphia, both Jake and the authorities are facing more super-powered opponents more frequently.

Vito: You’re in a rare position, in that you did the first issue, and you can sit back and relax and watch everyone “play” with your creation. What kind of “parent” are you? Trusting to a fault, or very hands on? Or somewhere in the middle?

Anthony: Early on I was very much on guard to make sure that MY Jake was the Jake we’d see in the other five issues of the series. But I learned pretty quickly that the other creative teams I was working with were more than trustworthy. I got more hands-off as the process continued and I was not disappointed. 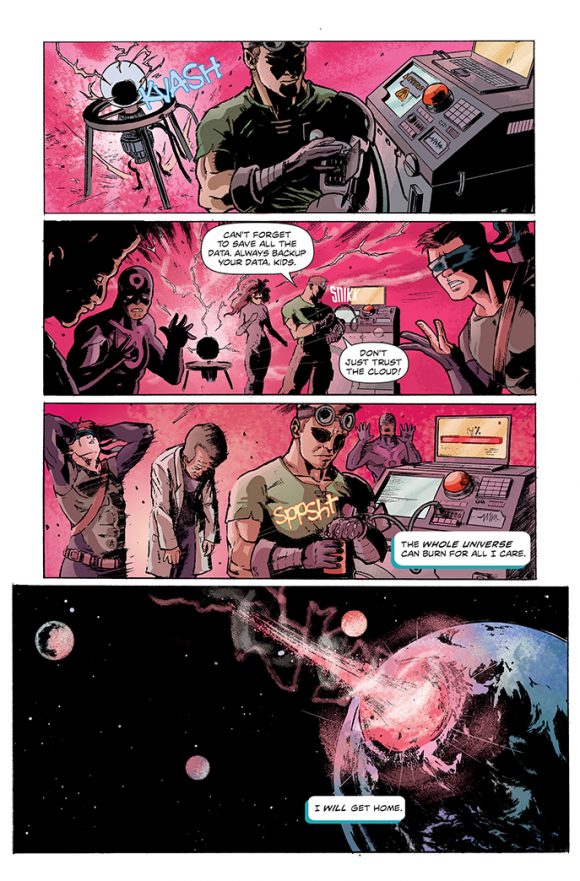 Anthony: I don’t want to give anything away about the story but I planted the seeds for a little joke in Chapter 1 that will pay off later in the series. Karma’s a bitch.

Vito: Finally, let’s sell everyone on Volume 3 of F1rst Hero. Without giving away spoilers to Actionverse, what can we expect in Jake’s next adventure?

Anthony: The action in the series is definitely getting wilder. In Volume 3, Jake has returned home after the Actionverse adventure with new abilities and a new understanding of his mission as a hero. But he still has Paul Kirkson and the Extrahuman Task Force to deal with and a new extrahuman threat in the form of a 9-year-old girl with mind-control powers. And if you think that’s scary…wait ’til you meet HER MOTHER. 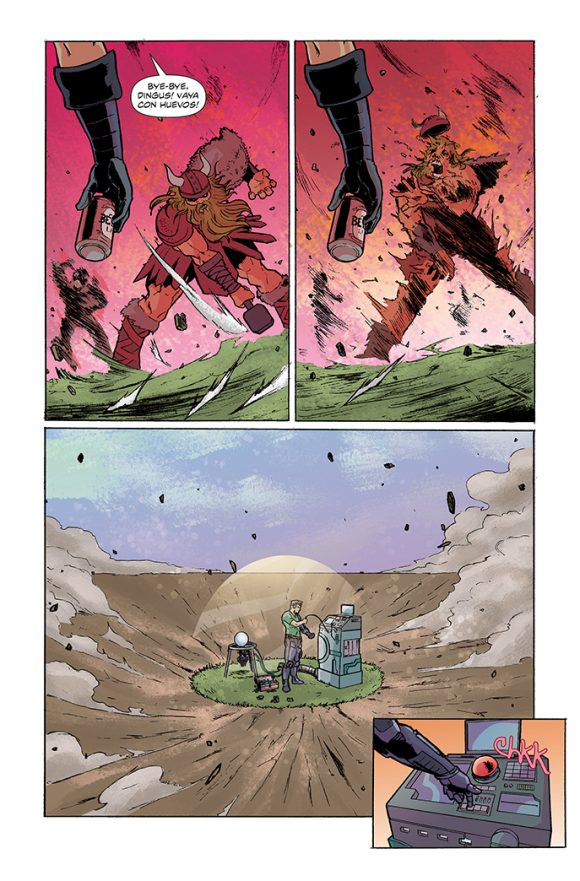