Action Lab is celebrating its first five years as a creator-owned label with a wide-ranging adventure that brings together its mainstay titles, such as Jamal Igle’s Molly Danger and Vito Delsante and Sean Izaakse’s Stray.

Every Thursday through the Actionverse event, Vito is talking with his fellow creators about the issue that just wrapped — with an eye toward what’s to come — in ACTIONVERSE AFTERMATH.

And every Monday, you can look forward to a dandy EXCLUSIVE preview of that week’s issue. 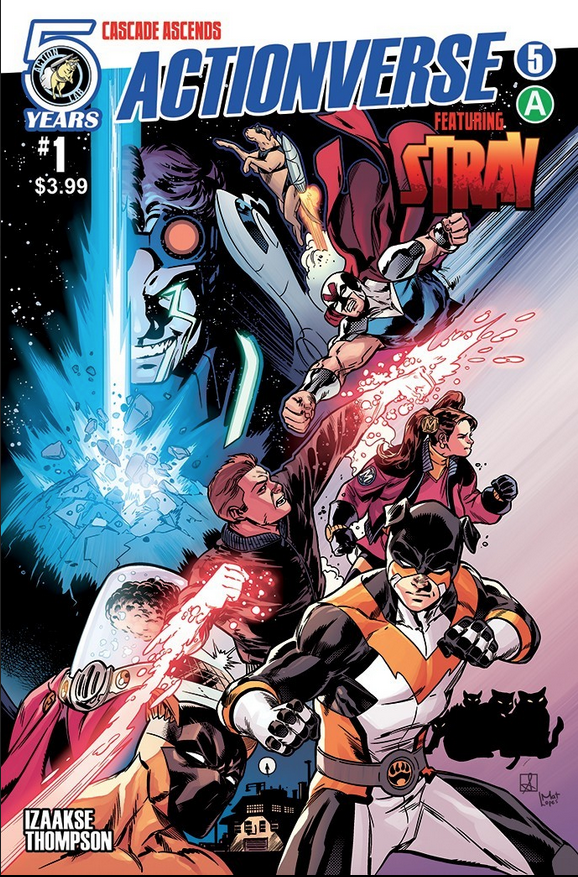 This week, it’s Delsante and Izaakse talking about Actionverse’s Stray issue. I want to point out that when 13th Dimension was barely a month old, Vito and Sean did a two-part interview about creating Stray — with each other. (Links below.) It was great creator-to-creator stuff, so it’s fun to see these guys here again. — Dan 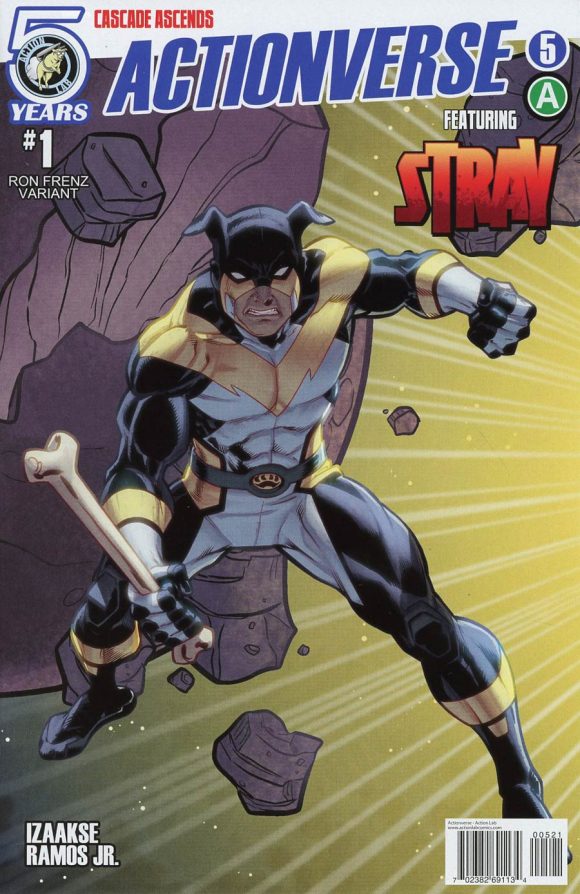 The smartest thing I ever did was admit to a love of Aquaman. Because that fandom led me to Sean Izaakse, one of the most talented artists I’ve ever met. I have the distinct honor of not only working with him, but collaborating with Sean on our co-owned book, Stray.

Vito Delsante: OK, Sean…every time we meet on 13th Dimension, I end up interviewing you about Stray and…well, here we are again. What can you tell readers about where Stray was after Issue 0?

Sean Izaakse: Between the end of Issue #4 of the Stray mini-series and at the start of Actionverse Issue #0, Stray/Rodney is still reeling from the events that happened (in Volume 1). He’s still a little raw and anxious and still getting into the swing of being back in the costume and taking on the bad guys. He’s also a little lost and feels alone, not quite sure what his next move should be. It’s one thing to say you’re going to get back into crime fighting again, but to do it on your own is another thing entirely. In the old days, he had the Doberman and the TeenAgents to turn to for help. Since his father’s death and cutting ties with the TeenAgents, he’s starting from scratch and finding out how lonely it can be when you stray from the pack (sorry I couldn’t help myself with that one).

Vito: I do that same pun every now and again, so you’re in the clear. This is your first professional writing credit, and a lot of people were a little confused that I didn’t write this issue (let me even go so far as saying, I didn’t even PLOT this issue). I, personally, know you can write, but this was your first real opportunity… and it happens smack dab in the middle of a weekly event. Were you intimidated at all?

Sean: Hell yes! Writing can be a bit daunting as it is and on top of it, I had one of the issues that had to connect threads from the issues before it that other great writers have worked on and then move the main story forward for the next guy (NOTE: That next guy was me. -Vito). If I was just writing a one-off issue it would have been easier because I wouldn’t have to worry as much. So yeah, it was a bit of a challenge. The thing I really wanted to do was make sure that every person’s character still sounded and acted like they do in their own books. I think that was the really stressful part of writing the whole issue. I didn’t want to let anyone down or make their characters sound out of character, if you know what I mean. 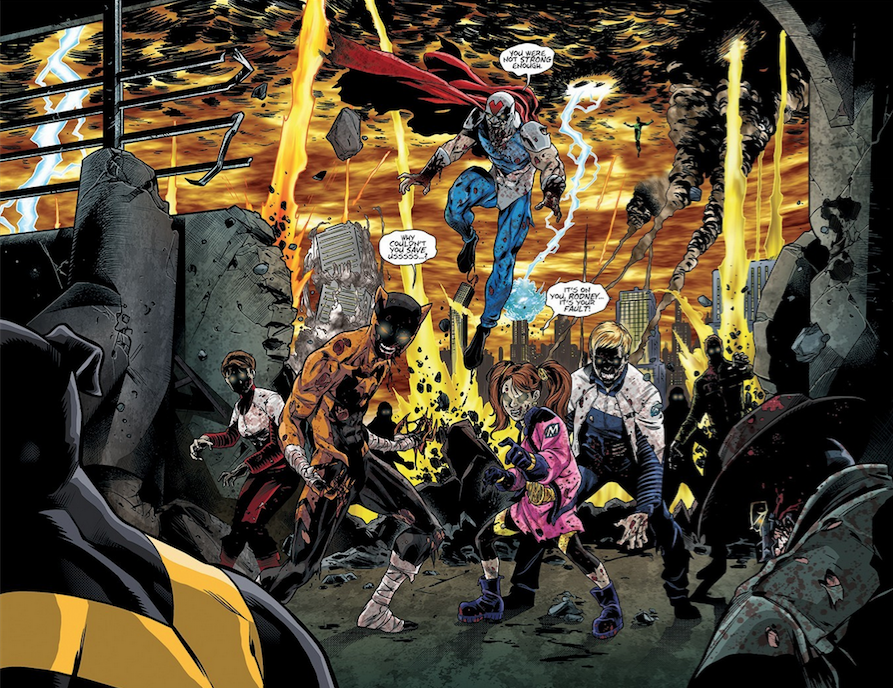 Vito: The two-page splash on Pages 2 and 3 were…whoa. Just…WHOA! And not to diminish any of the other pieces in the book, but that seemed so…fully realized. How early in the writing or plotting process did you come up with that visual?

Sean: I don’t want to give away any spoilers, but it’s probably the first thing I came up with that I wanted to draw for my issue. I had the idea for it way before there were even thoughts of an Actionverse crossover. I went to a local con and I got asked to draw something (in the interest of avoiding spoilers I won’t say what it is) and it sorta popped into my head and never left. Then when time came for me to write my issue and reading what happened to Stray in the issue before it, well it sort of felt like a great excuse to draw that and also hopefully give everyone reading the issue a bit of a “WHOA!” moment.

Vito: One of the things that I enjoy about being your collaborator is watching you design a character, and you not only came up with the design of Cascade, but also the four villains he goes up against. Now, I feel like I know the answer to this question, but are you comfortable designing characters?

Sean: I love designing characters…actually to be more specific, I love redesigning existing characters. Designing characters from scratch is stressful and makes me want to pull my hair out and pretty much makes me hate myself. You know this from the work we’ve done this far that sometimes I can get a design done in one or two passes and be pretty OK with it. But a month down the line, I will probably hate it and start making changes, which I’ll also hate. Then there’s time where I will have like 15 passes on a character design before I’m OK with it. And very rarely do I just come up with a design that I love, [but] Stray is one of those rare cases. And it usually happens when I’m half asleep and just about to call it a night. Seems like that’s when I access that little creative box in the corner of my head. Go figure. 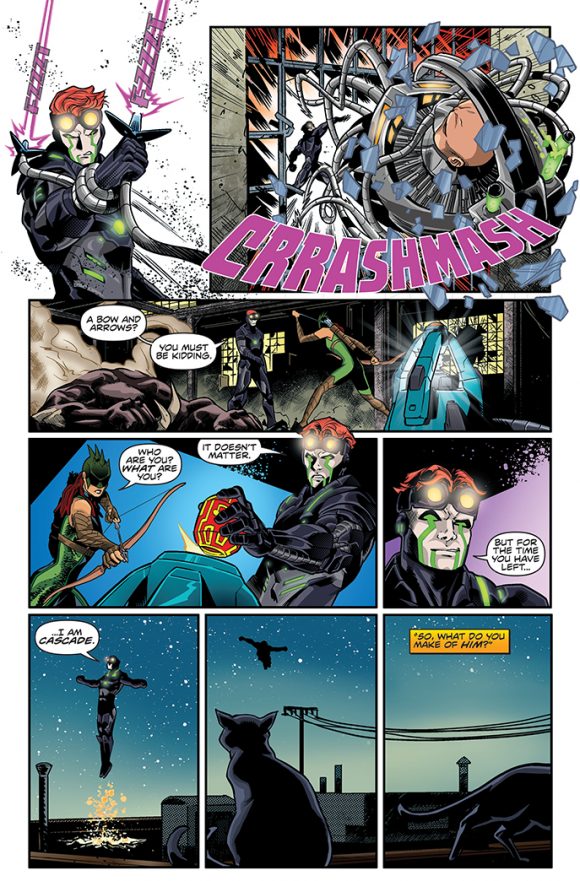 Vito: You have the penultimate issue, the one that, more or less has to “sell” the final issue. And I say this because you did a great job, as both a writer and artist, of keeping tension high and the action moving in the issue. And I’m looking over the issues beforehand… you’re only the second artist to draw ALL of the major characters in the series (and Cascade only appears on the last page of Issue #4). That’s a heckuva feat, so I have to ask you… how’d you balance the face time?

Sean: I honestly have no idea. I sorta just thought of each character individually and thought of things I’d like to see them do or say, and react to each other. Then it was just finding a way to get each of those scenes in there.

Vito: Ray-Anthony Height and I noticed in his issue (last week) that Midnight Tiger takes a bit of a back seat, and Stray does the same this week. Now, I know that in the grand scheme of things, this isn’t as important as telling the story, but if given the chance to go back, would you change anything to make Stray more prominent?

Sean: I probably would. I started out with him in the lead in the beginning of the story and I originally wanted to have everything happen from his point of view but the story I had in my head didn’t quite lend itself to it. 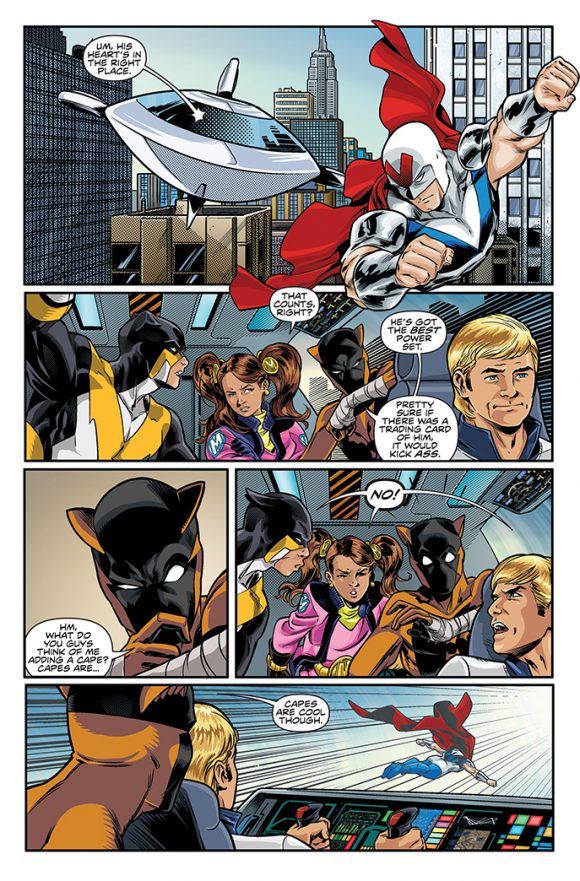 Vito: Something readers probably don’t know about you (but should suspect with all your work on Pathfinder) is that you’re an avid tabletop RPG gamer. How does playing RPGs affect your approach to designing and drawing comics, if at all?

Sean: I don’t know if it really affects how I draw comics; it’s more like I approach drawing fantasy comics differently to how I would draw, say, superhero comics. When it comes to superhero comics, I grew up loving artists that had a very clean art style and they are a heavy influence on how I draw superheroes. Fantasy, on the other hand, I love the grit and the detail of fantasy artists, so when I draw fantasy, I sort of get lost in the details of everything. From the textures on the skin of the monsters and leather to designs on armor and runes on magic swords, I love that stuff. But the flip side to that is it takes me twice as long to draw than it does my superhero work.

Vito: You and I both know how Actionverse ends, and where we’re going to see Rodney (aka Stray) next. You’re actually doing more writing and plotting with me. Did your work on AV #5 get you more comfortable with that?

Sean Izaakse: It did. I mean I’ve written short stories before, some of which I still have to finish, and I’m working on a graphic novel of my own I want to finish in the next couple years in between work. But yeah, it has helped me think that I can do this. I want to be known as a creator and not just an artist. And hopefully with more writing work, I’ll figure out what methods work for me when it comes to writing. I have a couple one-shots and short arc ideas for Stray and the characters that inhabit his part of the Actionverse just waiting in my head to be let out. And I’m super excited for the arc you and I have ironed out. That’s gonna be a hell of a ride. 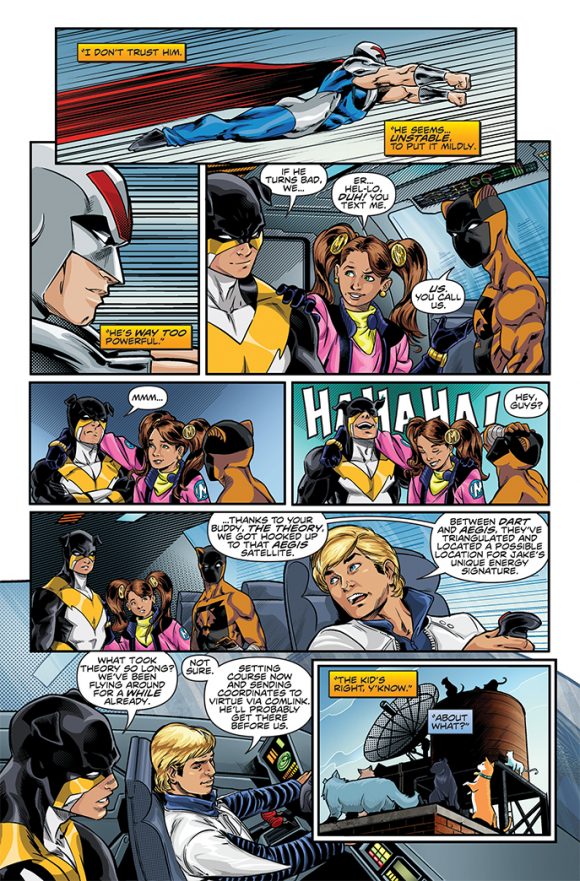 Vito: So, after this is all over, you’re going to take a short break from Stray, but you won’t be going too far away (you’re taking over cover-art duties and you’ll be doing some interior pages). How hard is it to hand over the keys to your character to another artist? Especially one that you created?

Sean: It’s a weird feeling. And even though I want to branch out and do other things and work with many talented creators, I want to make sure that my presence is always felt in anything I had a hand in creating, which is why I’ll still do covers and work on issues and arcs where I can. I always want to make sure what I’ve got a hand in will be the best product we can have out there. And of course give readers the best and most entertaining stories we can tell.

Vito: I feel like asking you this is a bit of a cheat, but what do you want to do next in comics?

Sean: Hmm, well I have a couple pitches I’m working on at the moment with some great writers. If I have any say, I’d like to get both of those up and running and fingers crossed I’d still obviously like to do some work for the Big Two. This year has been a bit of a roller coaster, so anything could happen. I’m just letting the universe lead me where I’m meant to go.

NEXT WEEK: The finale.