The writer salutes one of the Golden Age’s greatest artists… 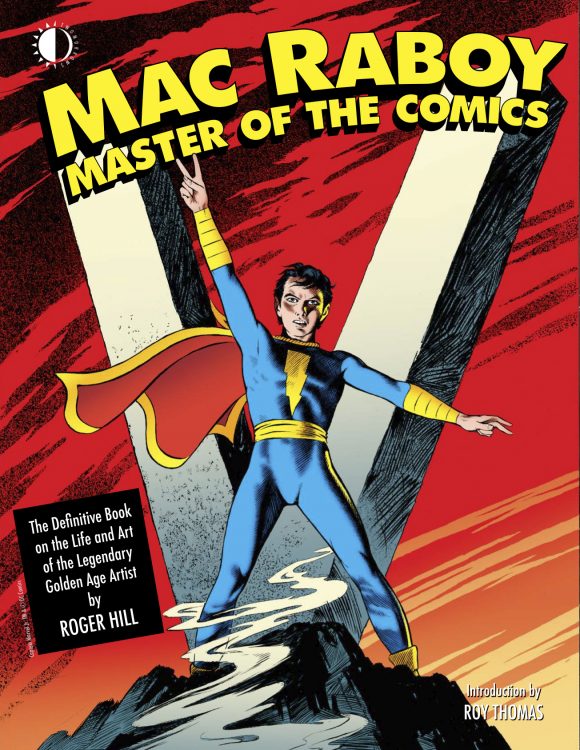 Mac Raboy was one of comics’ greatest artists, with a lush style that stood out among his Golden Age peers. He and writer Ed Herron co-created Captain Marvel Jr., easily Raboy’s greatest claim to fame — a character with a look so distinctive Elvis Presley is said to have modeled his hairstyle after him.

But Raboy contributed much more to the comics field and is the subject of TwoMorrows’ latest illustrated biography — Mac Raboy: Master of the Comics, by Roger Hill.

The book is due out Nov. 6 — and we’ve got an EXCLUSIVE EXCERPT for you: Roy Thomas’ introduction to the 160-page hardcover.

No, not True Grit like in a well-known novel and a couple of film adaptations — but Grit, the “Family Newspaper” of an earlier day. It was a big fat tabloid-style publication, must’ve been 60 pages or more, that was sold door-to-door back in the 1940s and ’50s… maybe for some time after that.

There were lots of ads in comic books advertising for boys to sell it. The idea was that each week the company delivered the papers, and the salesboy (I don’t think girls were allowed to apply, at least not back in my time) was expected to peddle them house to house. For all I know, he had to pay for the issues up front and was on the hook for any unsold copies.

Many’s the Saturday in the late ’40s and early ’50s, I remember, when my mother, if she had to run an errand, would point to a shiny dime sitting atop the family radio console, and say, “That dime’s for if the Grit boy comes by.” He usually did, and for that we got a weekly tabloid full of lots of text and pictures, some of which was aimed at the general public, and some specifically at kids. Something for everyone, that was the idea. 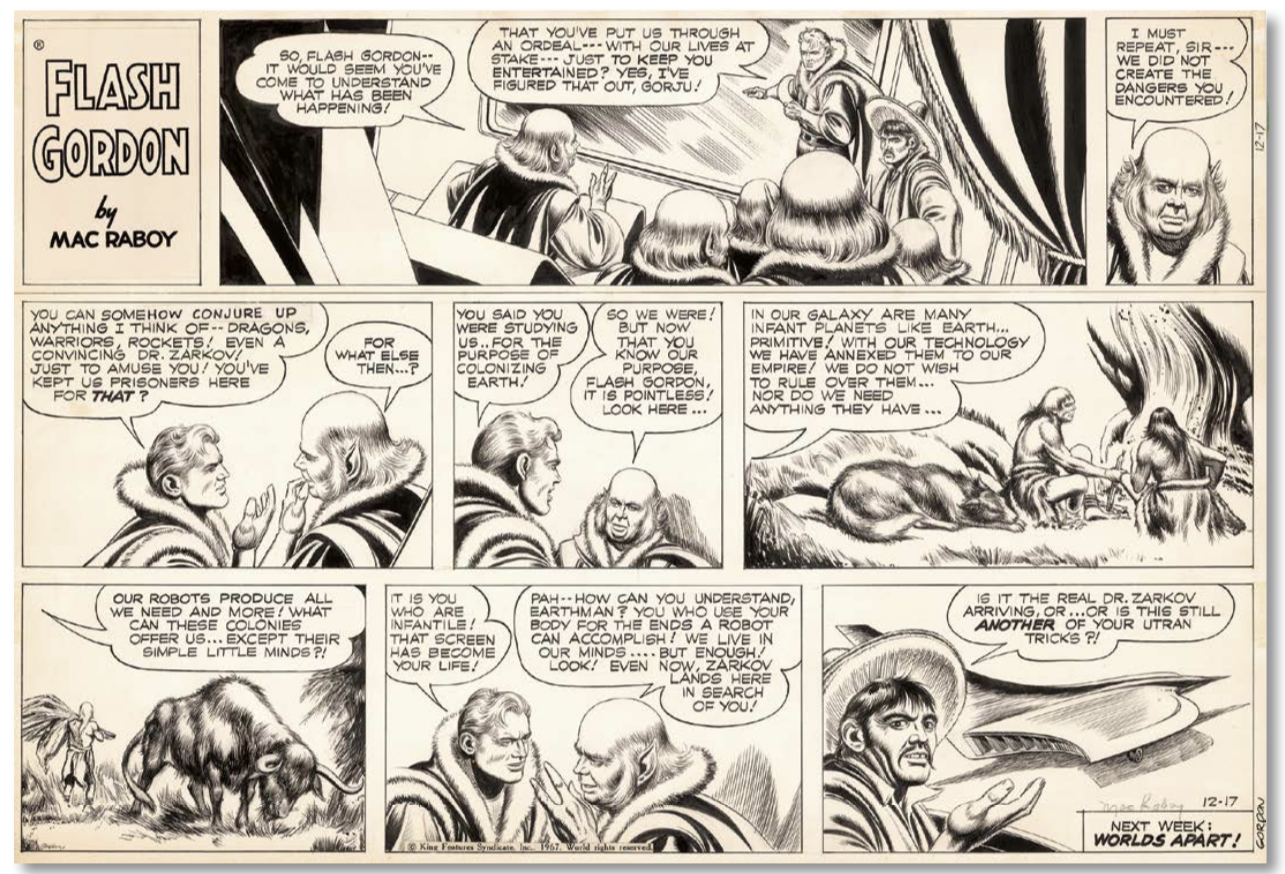 But you know what? The only, sole specific thing I recall about all the Grits I perused, week in and week out, for at least the larger part of a decade—was the weekly, Sunday-style, black-&-white-printed Flash Gordon comic strip drawn by Mac Raboy.

I don’t recall the stories, but they had a distinct science-fiction, space-opera look, with sleek-style space suits and jazzy rockets and beautiful women and strange, alien worlds of ice, fire, or whatever. And that was the province of the artist, whom I was naturally encountering for the first time.

Little did I know that the high heyday of Flash Gordon was already in the past, coming to an end when original artist Alex Raymond went into the Army during World War II — and came back out with no use for rayguns or rockets, proceeding to draw a beautifully dull private detective strip for the rest of his too-brief life. The idea, though, that there had been an even more spectacular artist on Flash Gordon before the guy who signed his name “Mac Raboy” would definitely not have been believable to me at the time.

Nor was I aware, until years later, that Raboy himself had reached perhaps the apex of his style and influence several years before I first encountered him in Grit — when he was drawing “Captain Marvel Jr.” stories in the pages of Fawcett Publications’ Master Comics. 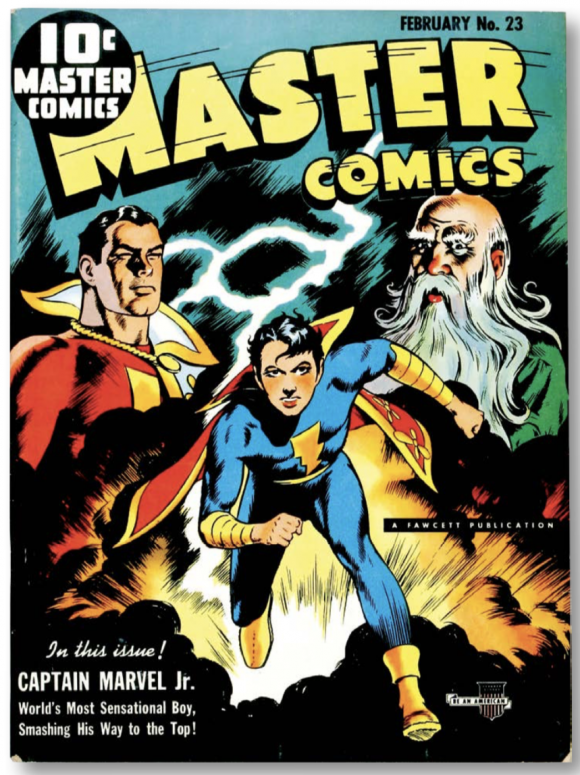 I do recall seeing an old (meaning, early-1940s, maybe four or five years old when I first ran across it) issue of Captain Marvel Jr. at my grandparents’ farmhouse in Old Appleton, Missouri… and those circa-1942 stories looked pretty good to me, and not unlike the romantic realism (not that I’d have used that term then) that Raboy was giving the same feature over in the also-monthly Master. But the CMJr stories, it would turn out, were basically people trying to closely imitate, if not downright trace, the pace-setting work of Raboy over in the anthology title.

It may have been the early 1960s and the beginning of “organized” comics fandom when I first encountered a Raboy-drawn “Captain Marvel Jr.” or “Bulletman” story… no, wait, I take that back! Actually, even before I was poring over Flash Gordon in the pages of Grit, somewhere around 1945 or so, when I was just turning five, I must’ve walked into one of the local drugstores in Jackson, Missouri, and walked out with an exquisitely illustrated issue of The Green Lama, a comic that featured a Raboy cover and lead story about a hooded, caped super-hero. But the art wasn’t signed, so a couple of years later I had no way of knowing that there was any connection between the Green Lama and Flash Gordon artists.

Once I learned about Raboy’s eminent presence in the early Master Comics, though — first on “Bulletman,” then on “Captain Marvel Jr.,” I was eager to see more. I never really collected those mags the way I did, say, All-Star Comics or Flash Comics or even Captain Marvel Adventures (where the stories seemed stronger and more inventive than in the tales of the Junior Marvel)… and besides, the Raboy Masters from the beginning fetched higher prices on the dealers’ market than the average comic, and I was already having trouble coming up with enough money to complete my collection of All-Star… but I did own a few of them. 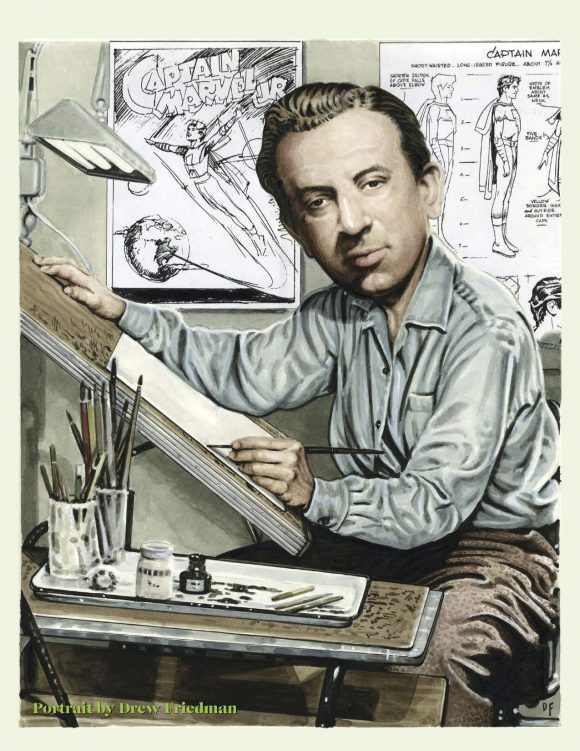 And, after I got to New York in 1965 and soon began playing poker most Friday nights at future comics-convention entrepreneur Phil Seuling’s Coney Island apartment, I rarely missed a chance to look over the early issues of Master that he kept, all in alphabetical order, in the wonderful little room filled with the comics he was buying and selling.

Later, I suppose a bit of luster wore off when I realized how much of that great Raboy work was actually composed of Raboy-directed tracings and photostats (done by his assistants under his direction), rather than original art — but at least that explained why it was that I kept seeing some of the same Captain Marvel Jr. poses over and over again, especially that one of him flying forward, his grasping hands stretched out, ready to grab the unwary reader. But, truth to tell, at least he and his assistants were swiping the best— himself!—and was that really all that much different from “Joe Shuster” or “Bob Kane” drawing very, very similar poses of Superman and Batman from issue to issue?

I tend to muse, from time to time, about the great comic book artists and writers and even editors I never got a chance to meet, even though they were still alive when I entered the field in the mid-1960s. One was Mac Raboy, although he passed away in 1967, less than two years after I hit town—and besides, by then, his comic book days were long behind him. 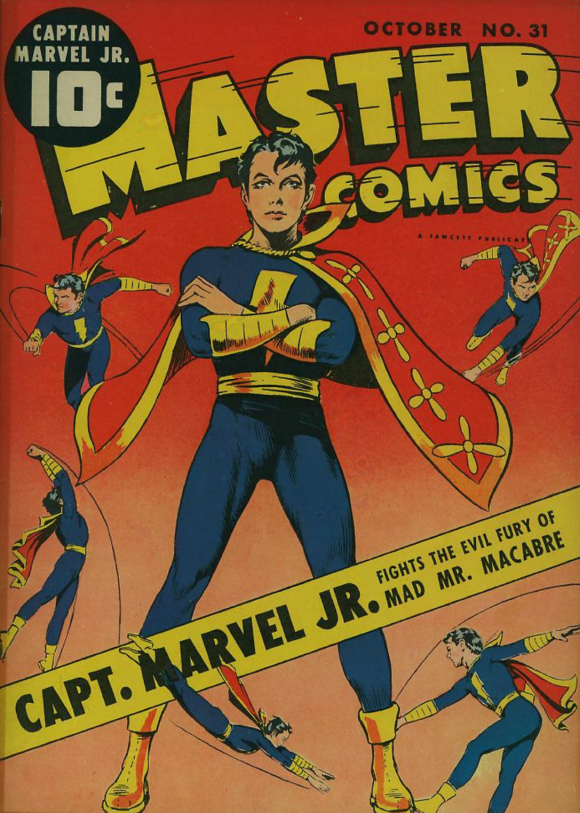 I don’t know all that much about his later years—I would like to imagine that they were primarily happy ones, though I wouldn’t bet on it. His early years were full of such wonder, such promise… his realization of what was surely a goal, to draw an already-fabled newspaper comic strip as the anointed successor to Alex Raymond… that, in advance of reading his life’s story, I have to wonder if his later life lived up, especially in his own eyes, to what he had hoped and envisioned for his future back in the days when he was the future—the artist of Flash Gordon, the greatest science-fiction strip of them all!

There’s probably no one on this beleaguered planet who’s better positioned to tell us Mac Raboy’s story than my comics-history colleague Roger Hill. Way back in the early days of the TwoMorrows incarnation of my magazine Alter Ego, he scribed a masterful (pun intended) short career biography of Raboy, backed by transcribed interviews with his longtime assistant Rubin Zubofsky, and with the son of the legendary artist.

Now, utilizing all that material and so much more that he has amassed in a nigh-lifetime of study of the illustrator, Roger has given us what is, and will probably remain, the definitive portrait of Mac Raboy—one of the true greats of the Golden Age of Comics, both in comic books and comic strips.

Mac Raboy: Master of the Comics, by Roger Hill, lists for $39.95 and is due Nov. 6. It will be available at comics shops, booksellers and directly through TwoMorrows. (Click here.)