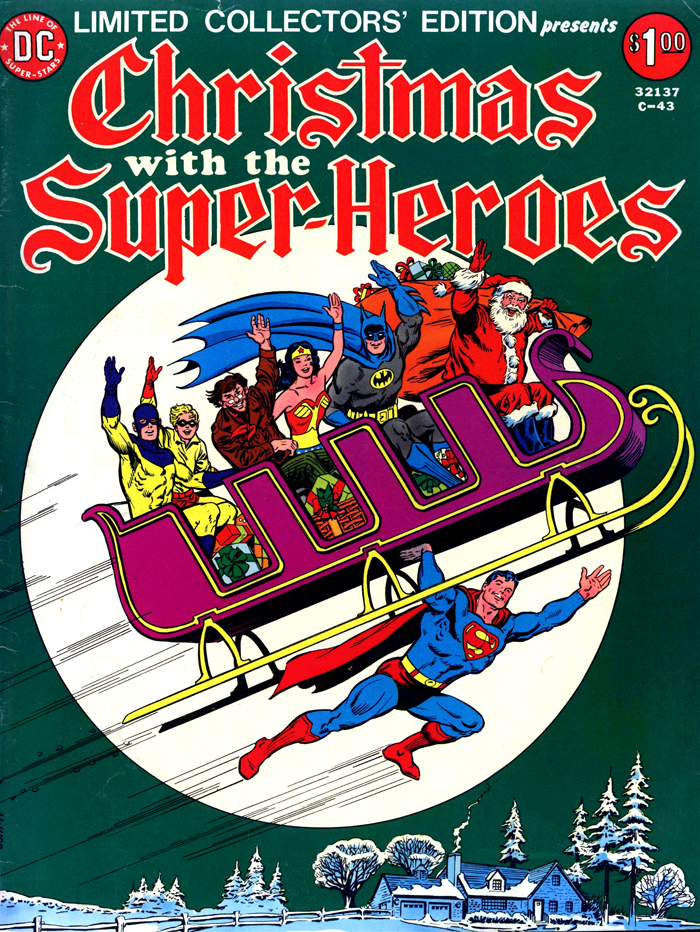 DC Comics has been celebrating Christmas in their comics almost as long as the company has been publishing, so when they started putting out treasury-sized books in 1972, it was only natural that the company would use this exciting new format to celebrate the holiday.

DC’s first holiday-themed treasury was Limited Collectors’ Edition #C-34, which we covered here on 13th Dimension last Christmas. DC did it all over again the very next year in LCE #C-43, which was released Nov. 6, 1975, bearing a cover by Curt Swan and Bob Oksner.

The Man of Steel fills in for Santa’s reindeer by carting the jolly old man and his bag of toys into the sky, along with his fellow DC pals Batman, Wonder Woman, Sandman and Sandy the Golden Boy, and…Cain from the House of Mystery? Uh, sure, why not!

The first story is untitled, but it originally ran in the Superman’s Christmas Adventure one-shot that was published in 1940 as a premium to be given away in department stores (the cover featured a blank space where the retailer in question could place their store logo). 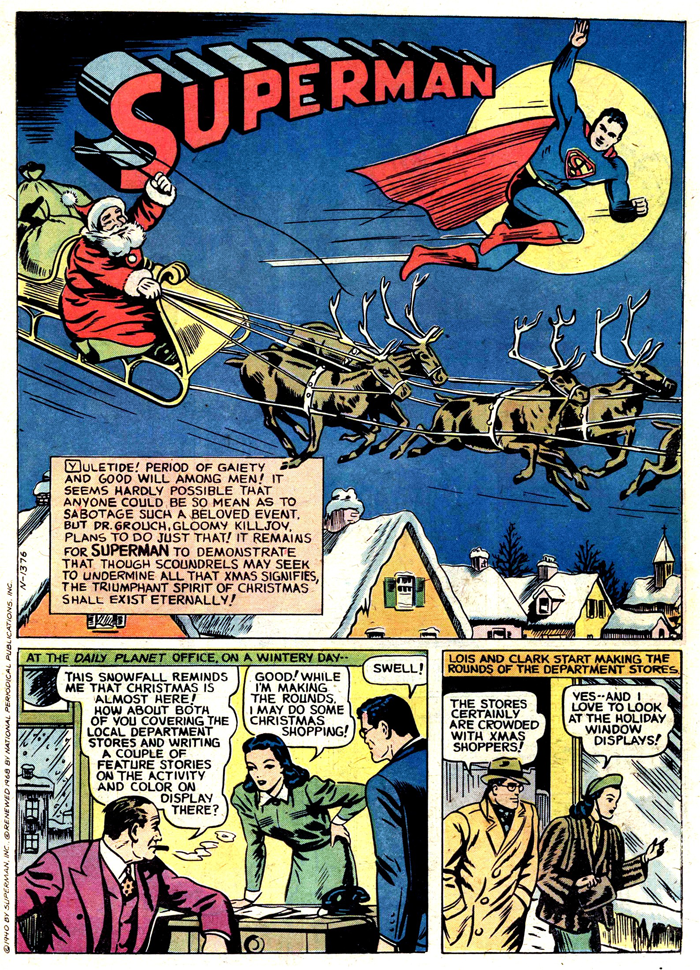 Written by Superman co-creator Jerry Siegel and drawn by Jack Burnley, this cheerfully goofy story features Clark and Lois being assigned to do a Christmas-themed article for The Daily Planet. They discover a young boy who is poor and won’t be getting anything for Christmas; this inspires a toy drive courtesy of the paper.

At the same time, they meet a snotty rich kid who has everything, but appreciates nothing. Meanwhile, two old misers named Grouch and Meaney hate philanthropy so much they try to convince Santa to give up the whole “giving” thing and go into business with them! When Santa (of course) turns them down, they decide to assault St. Nick’s workshop, destroy the toys, and give the reindeer knockout gas.

This leads Superman to fill in and help Santa ensure that the world’s children have a Merry Christmas. Not missing a beat, the Man of Steel then helps the rich boy see the error of his ways — and the kid uses his wealth to spread Christmas cheer, as well.

In The Silent Night of the Batman (a 13th Dimension favorite) by Mike Friedrich and the unbeatable team of Neal Adams and Dick Giordano, Batman is invited by Commissioner Gordon to the police station to sing Christmas carols. The Dark Knight is of course reluctant, since crime never takes a night off. But we see what Batman doesn’t: that his shadow—literally and figuratively—looms so large in Gotham City that he prevents crime and misery without him ever having to lift a finger. Batman emerges the next morning, amazed that, for once, Gotham was so quiet. Third is Night Prowler, a three-pager from the late, great team of Len Wein and Bernie Wrightson. Cain the caretaker of the House of Mystery (accompanied by a buxom “elf”) tells the story of a couple who hears a mysterious, scary noise downstairs in the middle of the night. The husband goes to investigate, only to find the “intruder” is no one to be scared of. 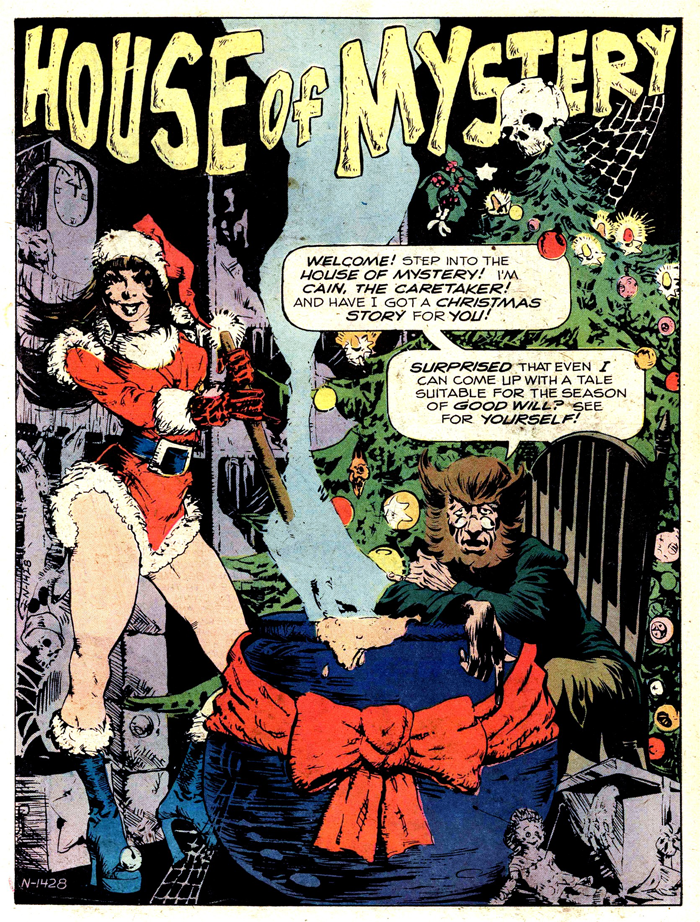 After a centerfold that highlights various Christmas messages from DC superheroes (Batman, Superman, Wonder Woman and the Marvel Family) Wonder Woman stars in The Story of Fir Balsam, by the Amazing Amazon’s original creative team of William Moulton Marston and H.G. Peter. Wonder Woman, while hunting for Nazis, meets a family, the Carters, that has been torn apart by the saboteurs who have infiltrated their small town. This leads to the Amazon Princess being bound up and led to a secret Nazi cave, where she plays possum until she can rescue members of the family. After the cave explodes, she uses a gorgeous balsam tree that was knocked loose in the melee and re-plants it in the Carters’ yard, as a Christmas present. H.G. Peter’s art, always so dense and idiosyncratic, really benefits from the larger panel size. In a bonus feature, longtime DC staffer Bob Rozakis gives us Santa’s Scrambled Super-List, a word-search puzzle where you have to find various DC characters, plus some creators like Carmine Infantino, Gerry Conway and Joe Orlando. Luckily, my copy does not have the markings of any former owner who tried to solve it!

The final story features Sandman in Santa Fronts For The Mob, by Simon and Kirby. Some mobsters hire a wrestler to play Santa in a department store (maybe one of the stores that gave away the Superman comic?) but Sandman is suspicious and decides to keep an eye on “Santa.” This is, of course, all a ruse: The plan is for Santa to deliver packages to rich families’ homes and then rob them.

When Sandman and Sandy the Golden Boy step in and disrupt the plan, the mobsters turn their attention to robbing the department store. Sandman is there, as well, but this time gets an assist from the wrestler, who was being played for a patsy. The comic ends with a shot of “King” Kirby’s drawing board (presumably the one used to draw this very story), showing a picture of Sandman, Sandy and Santa wishing everyone a Merry Christmas. 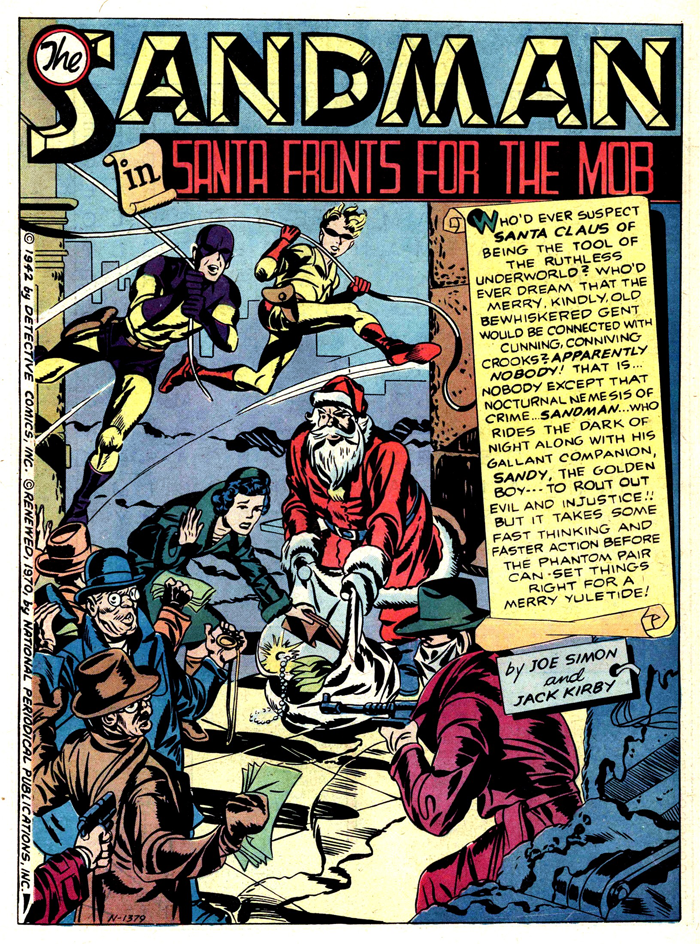 Rounding out the book are two pages of Christmas Super-Hero Sing-A-Longs (Sugar and Spike FTW), and a maze where you have to help Santa find his way to Gotham, Metropolis, Paradise Island and Atlantis so he can deliver presents to Batman, Superman, Wonder Woman and (in a rare treasury appearance) Aquaman, respectively. 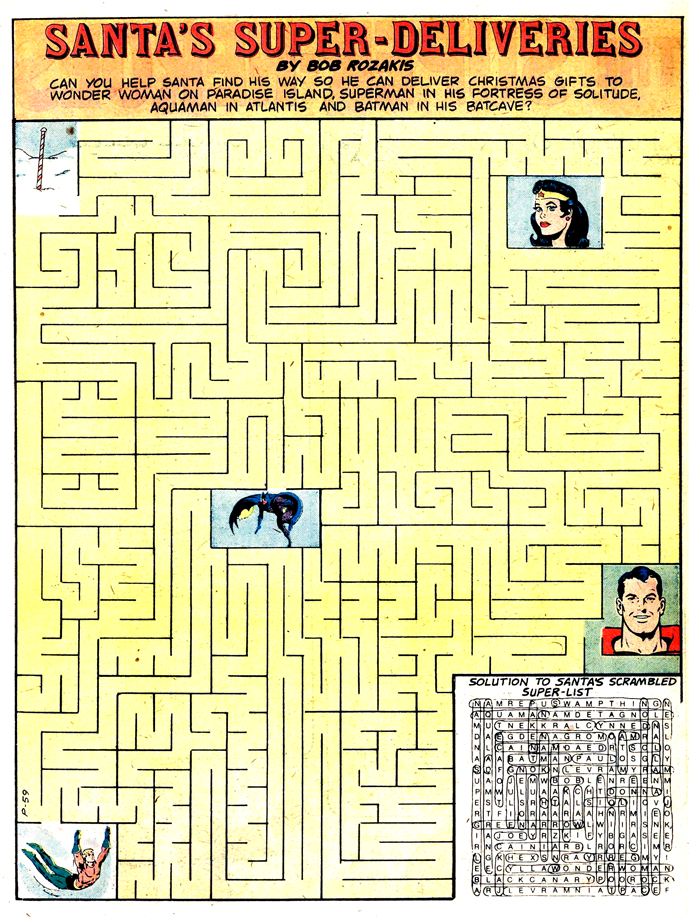 The inside cover treats us to some Season’s Greetings from the DC editors, and the back cover is a variation of the front — this time what it might look like to see Superman carrying Santa’s sleigh from the cozy confines of a home, decorated for the holiday season.

DC ran a full-page ad for this book, alongside one of the many, many Rudolph treasuries they published. If you look closely at the cover, you might notice something different: Perched on the back of the sleigh is Captain Marvel Jr. Holy Moley, where did he go? Is this some nefarious plot by Dr. Sivana? 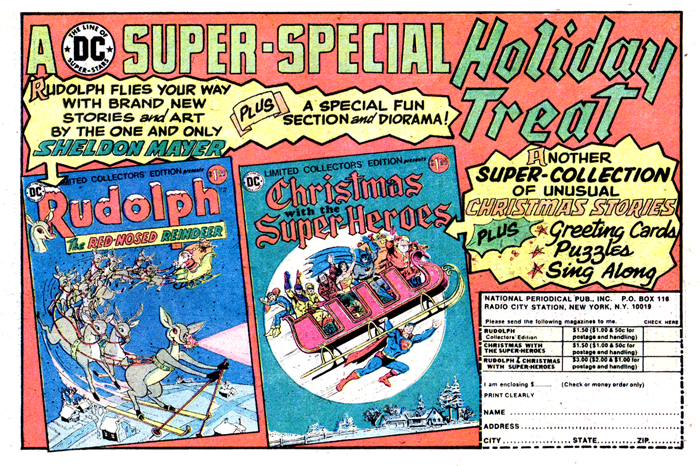 Not quite. DC’s treasuries used to run 84 pages, but right after the last Christmas with the Super-Heroes treasury, the page count was cut to 68, so the Captain Marvel Jr. story was dropped. Since this happened over a year earlier, it’s not clear why he was ever drawn on the cover at all (unless it was produced way, way ahead of time).

Whatever the reason, sometime after the ad ran and the book was put together, DC had to amend the cover and remove Marvel Jr. altogether. (Don’t be too sad for Freddy; the story that was supposed to appear, Freddy Freeman’s Christmas eventually ran in Best of DC Blue Ribbon Digest #22: Christmas with the Super-Heroes).

While this edition of Christmas With the Super-Heroes lacks a bona fide classic such as the Teen Titans’ A Swingin’ Christmas Carol like the previous one did*, Limited Collectors’ Edition #C43 is still a solid collection of holiday stories. Reprinting the Superman adventure from an impossible-to-find one-shot giveaway comic is a real treat, since when else would anyone have a chance to read it? The Batman story sticks out a little, since it is the only superhero story that doesn’t come from the 1940s. But it’s so warm-hearted and unusual for a Batman story that it doesn’t really matter—besides, who doesn’t want to look at Neal Adams/Dick Giordano artwork in as big a format as possible? 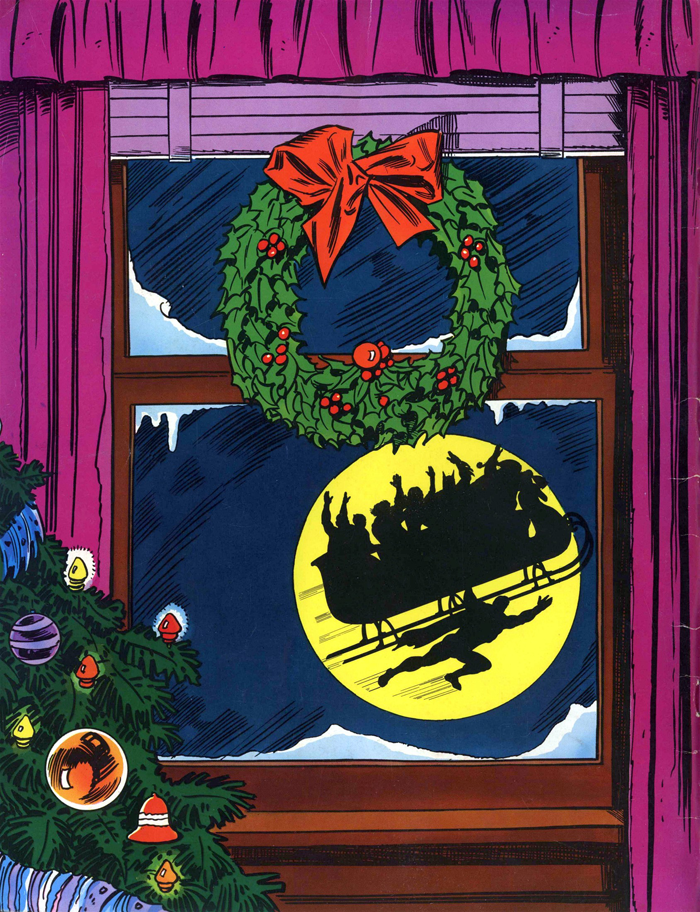 Strangely, this was the last Christmas-centric treasury DC would publish. They would continue with the Rudolphs (DC wasn’t crazy, they were a license to print money!) all the way until 1978, but never again would the company send an intrepid editor into the vaults to find some Christmas stories, sprinkle in some bonus features, and wrap the whole package up between two oversized covers. That effort moved to the digests in the 1980s.

These days, DC does Christmas anthologies as part of their regular-size line of comics but these feature all-new stories. With the internet and so much classic DC material now available in reprint or digital form, there’s just no need for collections like this. But at the time they were Christmas treasures indeed!

If you want to hear more about this book, check out the 12/23 episode of TreasuryCast, part of The Fire and Water Podcast Network!

Rob Kelly is a writer, artist and comics and film historian. He is the co-host of Aquaman and Firestorm: The Fire and Water Podcast, the host of The Film and Water Podcast and the host of TreasuryCast, a show devoted to the greatest comics format of all time, the treasury edition. He also writes the Reel Retro Cinema column for 13th Dimension.