After shepherding the Man of Steel to the silver screen in three big budget feature films (plus one starring the Maid of Might, Supergirl) producer Ilya Salkind tried his hand at another legendary figure, someone even more famous and beloved than Superman: Santa Claus.

Armed with many of the same members of the production team that made 1978’s Superman: The Movie such a massive success, financially and creatively, Salkind and co-producer Pierre Spengler would spend upwards of 40 million dollars bringing the origin of Jolly Ol’ Saint Nick to the screen. Tired of dealing with DC Comics and having to run every creative decision by them, Salkind would be free to tell the story he wanted to tell, exactly the way he wanted to tell it. And of course, Christmas movies, if they become beloved holiday favorites, can go on making money forever.

After first offering the director’s chair to John Carpenter, of all people (the mind reels at the idea of John Carpenter’s Santa Claus), Salkind turned to someone more in-house: director Jeannot Szwarc, who helmed Supergirl. Despite that film’s dismal reception, Salkind had a good working relationship with Szwarc and thought would be right for the assignment. 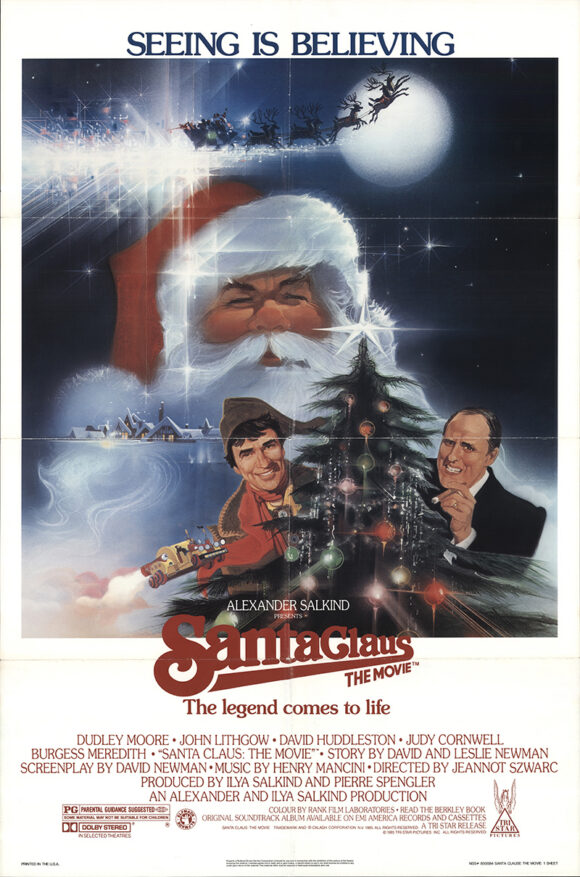 1985’s Santa Claus: The Movie features a screenplay by David and Leslie Newman (who worked on Superman), original songs by Leslie Bricusse (who wrote “Can You Read My Mind?” from the first Superman film), plus visual effects by Derek Meddings, who was so instrumental in making Superman look real. Helping with the flying effects—indispensible for a story like this—was David Lane, who made sure audiences believed Superman could fly.

Unfortunately, even with all these elements in place, Santa Claus: The Movie doesn’t quite work. David Huddleston (The Big Lewbowski, Blazing Saddles) plays the titular role. Despite this movie being his origin story, he really isn’t the main character. That seems to be Patch the Elf, played by the legendary Dudley Moore (who the Salkinds wanted for the role of Mr. Mxyzptlk, back when that character was penciled in to appear in Superman III).

But despite Moore being one of the funniest comic actors to ever live, he isn’t really given anything funny to do. His scenes with the villain of the piece, the unscrupulous toymaker B.Z. (played by John Lithgow, who is swinging for the fences here), don’t have much comic energy. As you might expect from a movie about Santa Claus, there are lots of kids in the movie, like the orphans Cornelia (Carrie Kel Helm) and Joe (Christian Fitzpatrick), but the movie really isn’t about them, either.

The story beats are similar to what we saw in Superman: The Movie, complete with a shimmering ice palace in the frozen north. Santa Claus visits New York and swirls around the Statue of Liberty, like a certain Last Son of Krypton on his first night. And Lithgow’s well-dressed, slimy businessman is the kind of guy that probably would have hung out with Gene Hackman’s Lex Luthor to trade back-handed business deals. But the film has a dismal, grimy feel to it that seems at odds with all the singing and dancing whimsy.

There’s a kidnapping plot involving one of the orphans that feels way too real for a movie like this, and having the kid get rescued by Dudley Moore dressed as an elf feels like two different movies smashing into one another. When we learn why Santa decides to distinguish between the good children and the bad ones when dispensing gifts, it’s because one kid beats up his sister’s cat, in a scene that looked none-too-fun to shoot for the cat. Yikes!

I feel like a real Grinch not liking this movie more, because as I said all the elements are in place, but they just don’t come together to make a charming, satisfying Christmas tale. Despite flying reindeer, elves, and whatnot, Santa Claus: The Movie tries to place itself in a real world. But then it introduces candy canes that can make people fly, ending with a final shot of B.Z. floating helplessly into outer space, which seems kinda terrifying for the younger set this film was aimed at.

Given Ilya Salkind’s track record and the globally recognizable subject matter, everyone seemed sure Santa Claus: The Movie was going to be a hit. Again, just like with Superman, there were numerous product tie-ins (no Marlboro this time, thankfully), and McDonald’s released a series of Happy Meal books telling the film’s story. 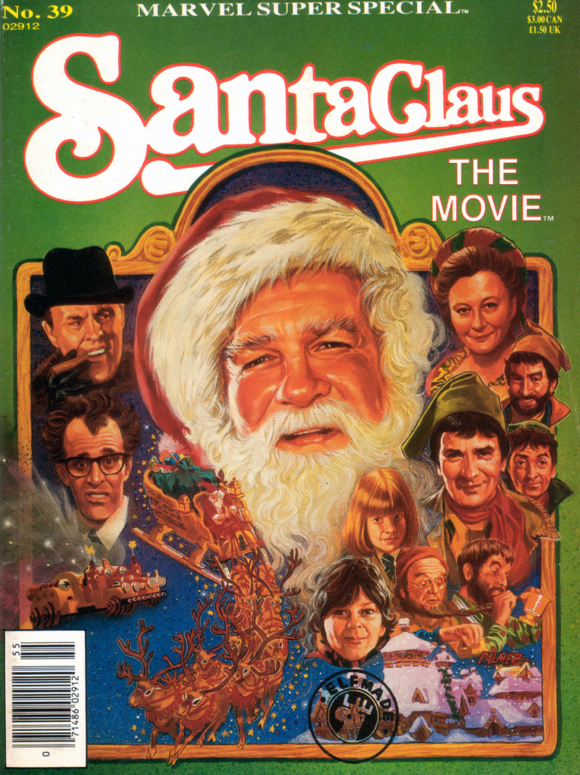 Marvel Comics got in on the action, too, releasing an adaptation of the film as part of its Marvel Super Special magazine. Released just one day before the film, “Santa Claus: The Movie” is written by Sid Jacobsen, drawn by Frank Springer, with a cover by Tom Palmer. It also features beautifully warm color work by Petra Scotese, who somehow gives the whole package a more cohesive feel, making for a quite solid adaptation. Somehow, the strange lurches of tone seen in the movie aren’t as jarring here, making this one of Marvel’s better film adaptations. 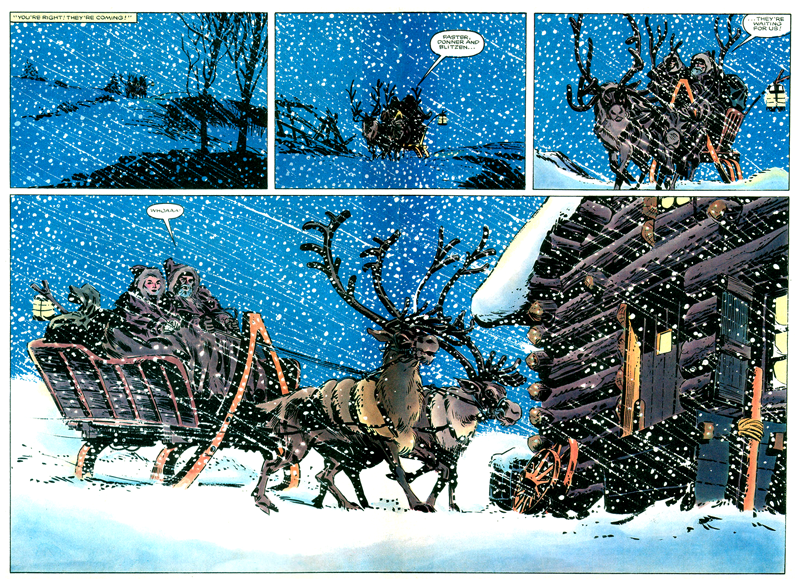 Like a lot of movies people saw as kids, Santa Claus: The Movie has been given a reappraisal over the years. It was a much bigger hit in the UK than in America, so much so that Lithgow once said that over there, Santa Claus represents half of what he’s known for. It was released on Blu-ray for its 25th anniversary, and if you check out its page on Amazon, there’s a long list of 5-star reviews! Not bad for a movie that its own star, Dudley Moore, upon seeing a screening of the film, called “a career ender.”

Ilya Salkind wouldn’t produce another film for seven years, eventually putting together a biopic about another rights-free subject, Christopher Columbus. 1992’s Christopher Columbus: The Discovery would star Marlon Brando in another brief, highly lucrative role; proving old producer habits die hard. Before that, of course, Salkind would go back in time and produce the Superboy TV series, which ran for 100 episodes in syndication, and would feature pieces of the Superman mythos previously unavailable to him in the films.

Santa Claus: The Movie is a noble effort, but overall it just doesn’t hang together to make a satisfying film fantasy adventure. I’m still a little haunted by that image of B.Z., floating through space and toward a grim, lonely death. Although, if you recall the events of Superman IV: The Quest for Peace, maybe you can survive in airless space. Now that would be a Christmas miracle.

Rob Kelly is a podcaster and pop culture historian. He is the host/co-host of several shows on The Fire and Water Podcast Network, including Fade Out, TreasuryCast, For All Mankind, and Pod Dylan.