THE SCARECROW OF ROMNEY MARSH: The Strange Disappearance of DISNEY’s DR. SYN

ROB KELLY is back! It’s been a minute but the erstwhile 13th Dimension REEL RETRO CINEMA columnist — best known for his stellar work at The Fire and Water Podcast Network — is paying us a visit to discuss a favorite with Halloween flavor. Dig it. — Dan

It’s Halloween season again! That means the streets will soon be flooded with little kids in their Dr. Syn costumes (homemade and store-bought), wandering the streets demanding candy. Store shelves will be filled with Romney Marsh merchandise (including the really nifty action figure line—the Curlew is always short-packed), and Disney + will be heavily promoting its exclusive Dr. Syn TV series.

Wait—I’m sorry. That was the opening paragraph from a REEL RETRO CINEMA column to an alternate universe, where Dr. Syn, Alias The Scarecrow is one of Disney’s biggest original creations, a property they have been exploiting for decades since its original 1963 release. Let’s start over. 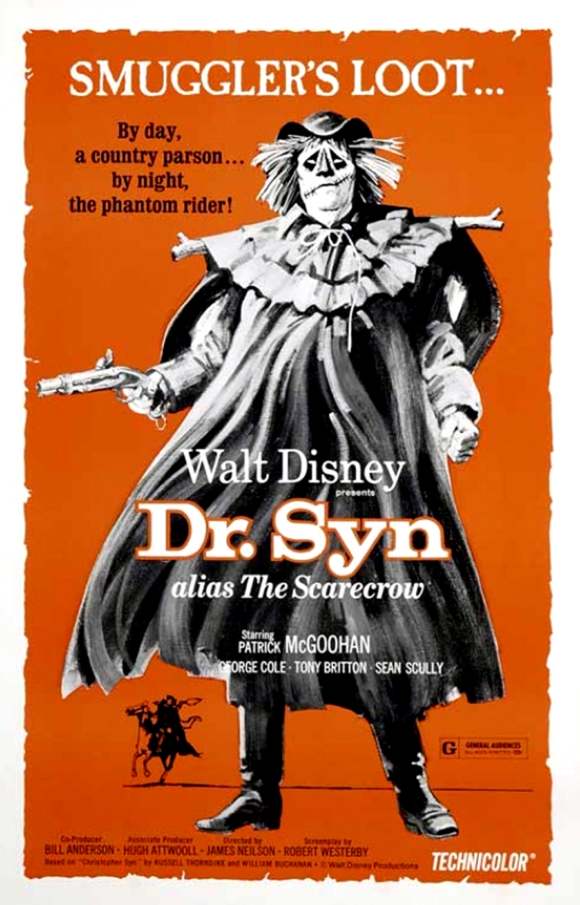 Never having been a huge Disney kid growing up in those Paleozoic, pre-internet days, I was only barely aware of a character called Dr. Syn and/or The Scarecrow of Romney Marsh. I would see a photo in a book or magazine, maybe, and I would wonder who that was—he certainly looked pretty scary, with his janky, dead-eyed mask. Since I was a “monster kid,” the visual certainly appealed to me, but I could never learn anything more. Then, thanks to the internet, I finally did.

The Scarecrow of Romney Marsh, based on books by Russell Thorndike and William Buchanan, was a three-part series that aired on Walt Disney’s Wonderful World of Color in February 1964, with Part One having the unfortunate luck to run directly up against the Beatles’ immortal debut on The Ed Sullivan Show. Confusingly, the three segments were edited down to feature film length and released in England under the way-cooler title Dr. Syn, Alias The Scarecrow, in late 1963.

Dr. Syn stars Patrick McGoohan as the title character, the vicar of Dymchurch parish in 18th century England. But by night he dons a terrifying mask and adopts a nightmarish growl as the Scarecrow, a Robin Hood-type who fights the tyranny of the British monarchy and its Navy. Like Robin Hood, the British government has put a price on the Scarecrow’s burlap-bagged head. But the people of Romney Marsh love the Scarecrow because he is fighting for them, with two of them—Mr. Mipps (George Cole) and John Banks (Sean Scully) – going so far as to donning their own masks and alternate identities as the awesomely named Hellspite and the Curlew, respectively. 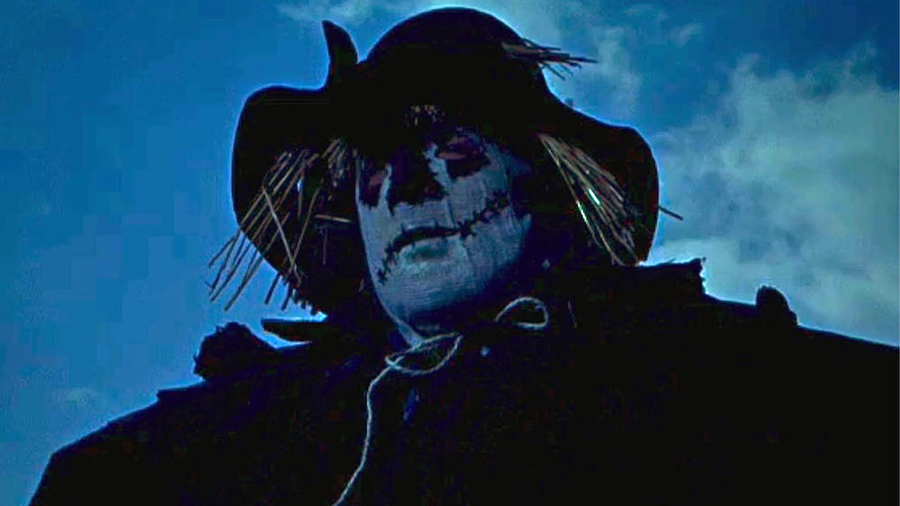 Produced with the full force of Disney behind it, The Scarecrow of Romney Marsh’s costuming, sets, and period details are, of course, all top notch. Unfortunately, with three segments, the show runs more than 2 1/2 hours, which is just too long. All the scenes with McGoohan as the Scarecrow—where he uses an extremely harsh, almost braying voice to disguise his true identity—are wonderfully executed and about as creepy as anything Disney would have produced in the 1960s.

The widescreen(ish) vistas of the countryside, dotted with off-kilter, looming shadows, are moody and effective, the action scenes move at a brisk clip, and the performances are all solid. But in between all that are lots and lots of scenes of the British nobility talking and talking, plus a romantic sub-plot between two ancillary characters that tests one’s patience. C’mon, let’s see the Scarecrow again! 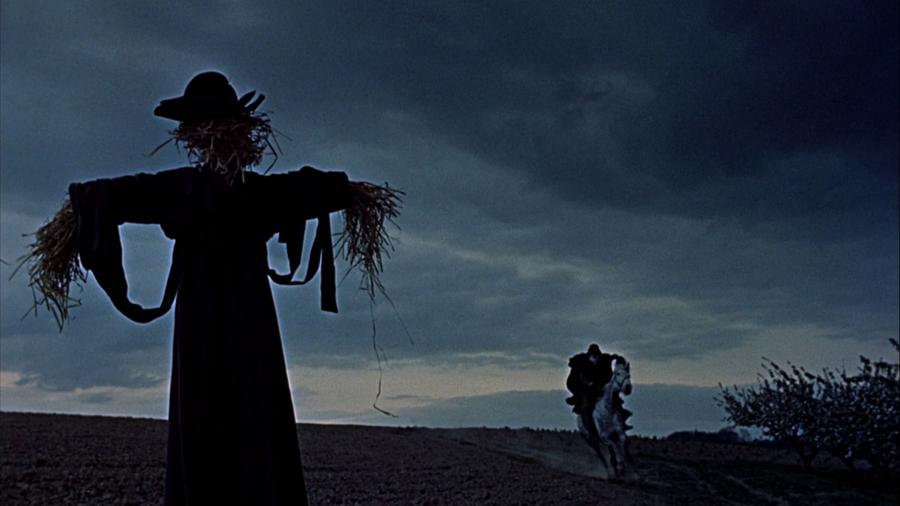 Luckily, the aforementioned British theatrical version, Dr. Syn, is cut down to a little over 90 minutes and eliminates almost all the jibber-jabber (and the romantic subplot), leaving the film to focus where it should—namely, the Scarecrow and his two sidekicks outrunning, outthinking, and outshooting the government. This version, strangely available on DVD but not added to the subsequent Blu-ray release, is a total blast and highly recommended. Which leads me to my next point: Why is Dr. Syn, alias The Scarecrow not on Disney+?

When Disney+ was first announced in 2019, it was sold with ad copy something akin to “Get access to the entire Disney library.” Which to me, meant, you know, the entire Disney library. I figured there’d be a few titles probably left behind. But surely Dr. Syn, one of Disney’s most unique properties and starring the legendary Patrick “The Prisoner” McGoohan, would be there, ready to go. I was so sure of my unassailable logic that I didn’t even look the movie up before signing up for the service and naming my online profile Dr. Syn (hmm, no available avatar of the character—strange!). It was then that I searched the site’s admittedly deep bench of content and saw that Dr. Syn was nowhere to be found. As of this writing, three (Disney) plus years later, it’s still missing. 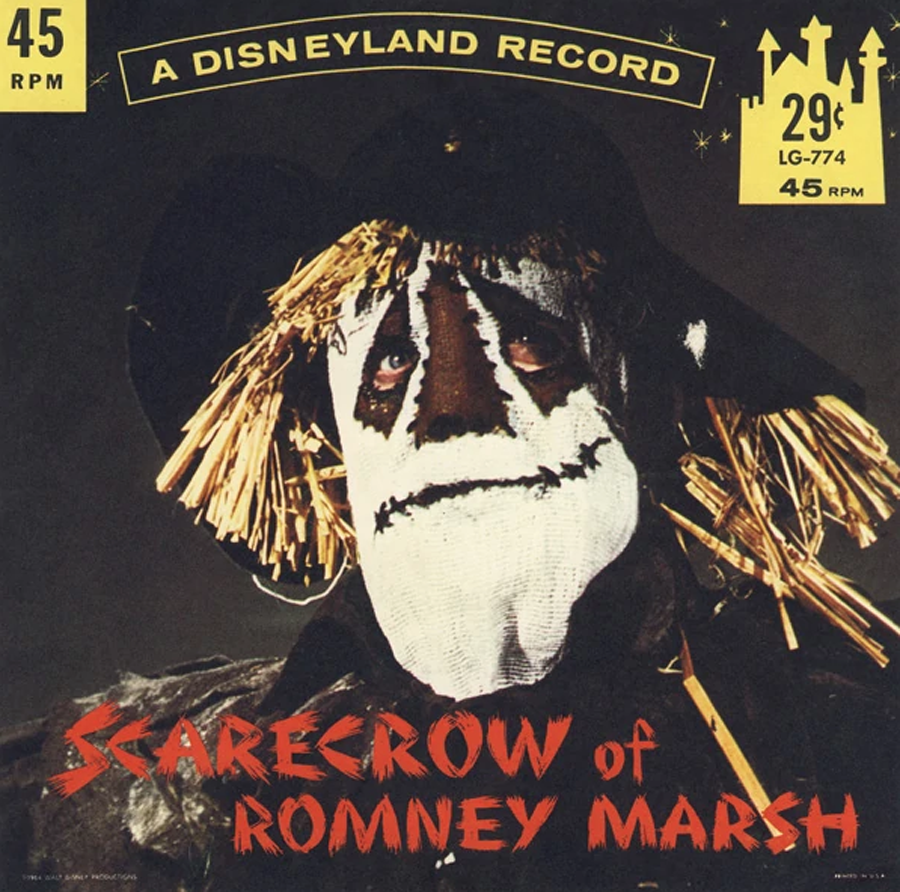 Which is a real shame. Since most kids don’t really engage with physical media anymore (that sound you hear is me, sobbing), relegating Dr. Syn to DVD/Blu-ray only basically ensures that no one below a certain age will ever see this movie. While Dr. Syn, even in its truncated form, is a little stodgy and talky for the average 21st century Disney viewer, the character is still inherently cool. Even with Disney’s stable of MCU characters, the Scarecrow is still probably the closest thing they have to Batman. 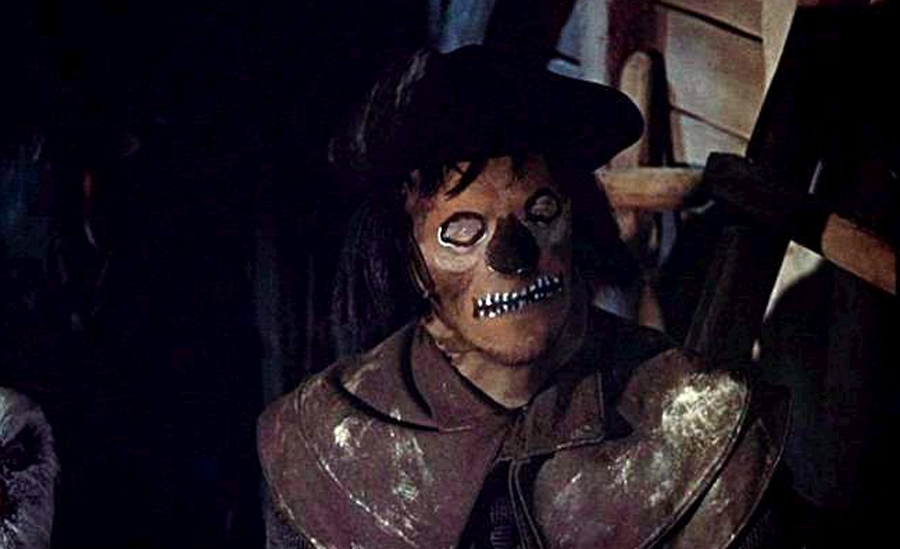 Don’t believe me? Check out all the similarities: Dr. Syn is a wealthy, respected member of the community, whose somewhat foppish demeanor hides his dual identity. Apart from his role as the Scarecrow, during one sequence near the end of the film, he dons another disguise to break into the local jail and free someone. He operates from a loft that works as a sort of CrowCave. As the Scarecrow, he puts one member of the community who seems to have ratted him out to the authorities on trial, recalling the scene from The Dark Knight Rises, where that Scarecrow does the very same thing (if for completely different reasons). One of his sidekicks, the overly-eager-for-adventure teenager John Banks, even dresses like, and is named after, a bird! 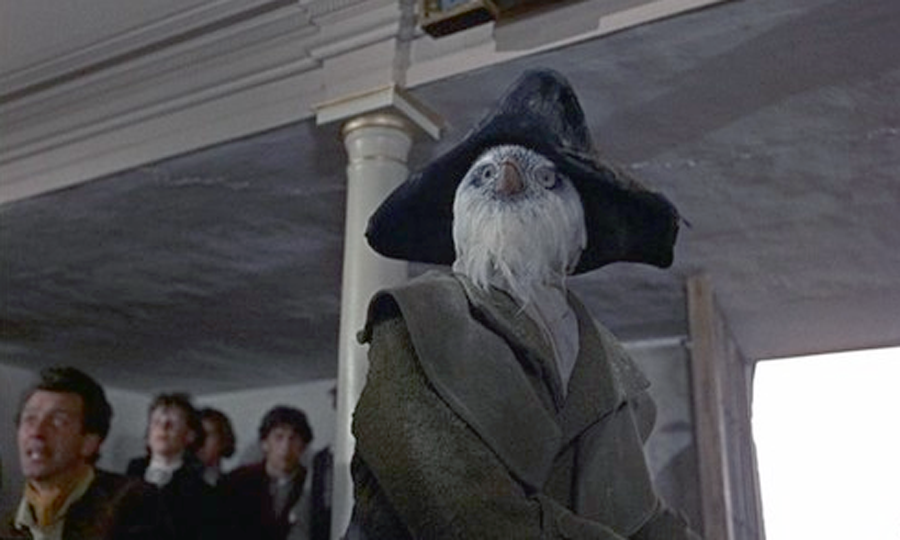 One final connection: Dr. Syn was directed by James Neilson, who helmed numerous other Disney movies like The Moon Spinners, Bon Voyage and Summer Magic. He also directed a lot of TV, including two episodes of Batman. In the alternate universe I mentioned earlier, the Jonathan Crane Scarecrow did make it onto the show, and he looked just like Dr. Syn, making those episodes (“The Bat Flies Out The Window”/”The Professor Eats Crow”) hands down the scariest two-parter the show ever did. Since the appetite for Batman content is seemingly inexhaustible, having a character like this just collecting metaphorical dust in the Disney vault is a baffling commercial decision.

Luckily, Dr. Syn has fared a little better as a comic book character. In 1964 Gold Key published a three-issue adaptation called The Scarecrow of Romney Marsh featuring beautifully lush painted covers by Sam Savitt. The writer is uncredited, but the interior art is by the late, great Dan Spiegle. The comic book, although truncated, decides to follow the beats of the TV version, so it too is too talky and slow, but still fun here and there. It also features some promo material on the movie, which, by the time the third issue came out in 1965, would have been impossible to see. 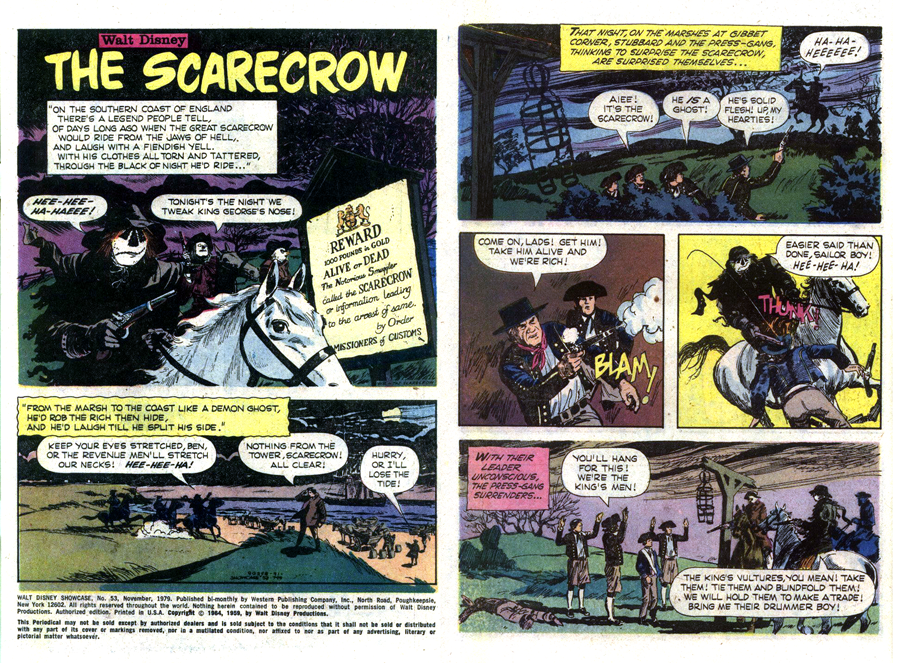 But unlike the movie version, this initial burst wasn’t it for the Scarecrow. He returned more than 40 years later for an all-new four-part adventure in the Disney Adventures digest magazine, as well as cameoing in two issues of The League of Extraordinary Gentlemen! (Supposedly he’s pictured on a wall in the film version, but I’m not sitting through that movie again.) In 1967, Britain’s weekly Solo magazine reprinted the Gold Key comics, complete with crazy quilt covers, somehow making the Scarecrow look even weirder. 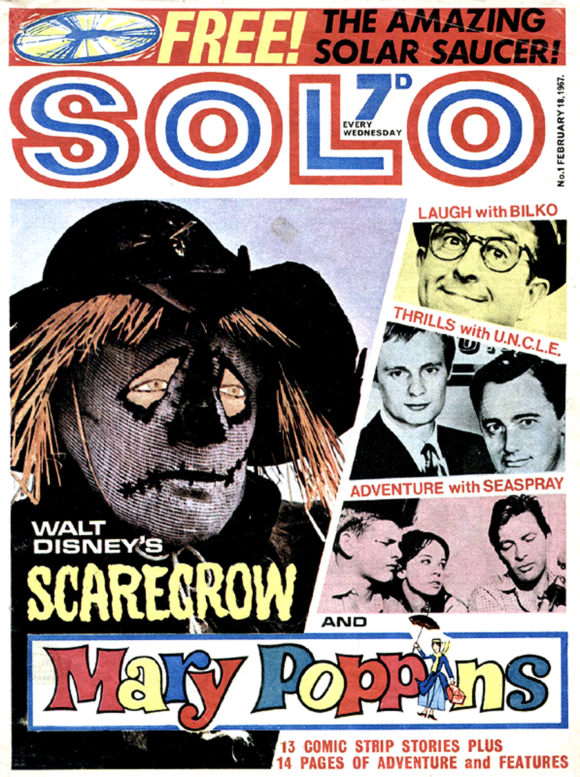 Add in the 1960s record and the 1970s novelization, it’s clear that the Scarecrow has never been completely forgotten by Disney. But, like Condorman (which we discussed a few years ago in this very column), the Scarecrow is a character ripe with potential and overdue for a reboot. Who knows? Maybe if we let Disney hear from us in sufficient numbers, by next Halloween, we’ll hear his terrifying laughter fill the air once again, in pursuit of justice. Or, at the very least, some yummy holiday candy.

ROB KELLY is a podcaster and pop-culture historian. He is the host/co-host of several shows on The Fire and Water Podcast Network, including Fade Out, TreasuryCast, For All Mankind and Pod Dylan.