UPDATED 2/19/22: The original Swamp Thing movie was released 40 years ago today! Dig this slightly rejiggered piece by Rob Kelly from 2017! By the way, Wein and Wrightson’s Swamp Thing is getting an Absolute Edition. Click here for the details. — Dan

In the early 1980s, sandwiched between blockbuster Superman movies, another stalwart of the DC Comics universe lumbered its way to the silver screen… namely, Swamp Thing, Len Wein and Bernie Wrightson’s brilliant creation that headlined his own comic in the early 1970s.

Producers Benjamin Melniker and Michael E. Uslan (who would also help shepherd Batman to the screen seven years later) hired director Wes Craven, who was then at a career low-point, to helm the film. After horrifying/thrilling/offending (take your pick) audiences with his previous movies The Last House on the Left and The Hills Have Eyes, Craven needed a job, so he took on a PG-rated “monster movie” that was aimed primarily at kids. And while Swamp Thing is a flawed film, I believe there is much about it to recommend, and a lot of that is thanks to Craven. 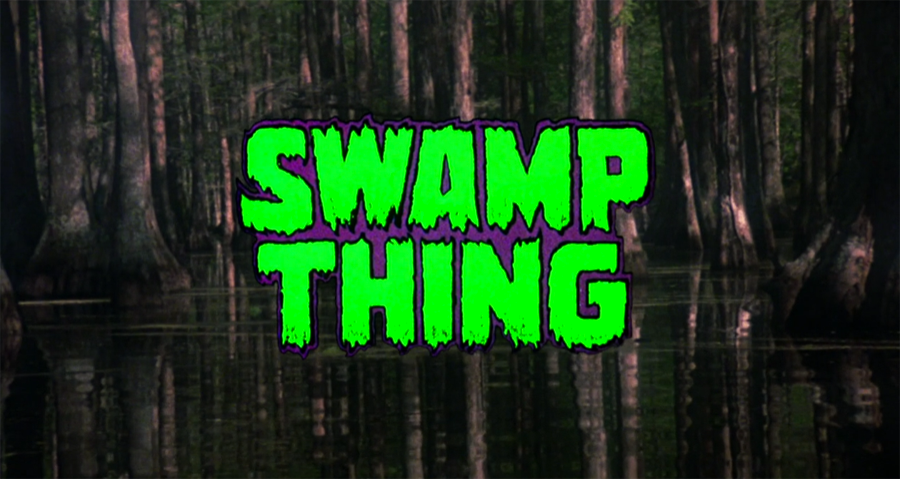 Swamp Thing’s plot is fairly similar to the character’s comic book, er, roots. Dr. Alec Holland (Ray Wise) is working on a super-secret scientific experiment that would create a plant/animal hybrid that could survive in extremely adverse environments. Working alongside him is his sister, Linda, and as the film opens they are visited by newly assigned government agent Alice Cable (the great Adrienne Barbeau). Cable takes a shine to Holland, but before anything can develop, Holland’s top-secret lab is attacked by some armed goons, hired by mad scientist Dr. Anton Arcane (Louis Jourdan). The lab is blown up, killing both of the Hollands… well, almost.

Cable manages to escape and is chased through the swamp by Arcane’s men. Alice befriends a young kid named Jude (Reggie Batts), who runs a nearby service station. There she makes a phone call to her superiors, but the line is tapped by Arcane who intercepts the call. Arcane’s men close in on Alice, leading them to killing Jude and then trying to do the same to Alice. Suddenly Swamp Thing (now played by stuntman Dick Durock) roars out of the water, rescuing Alice and using his restorative powers on Jude.

Alice figures out this creature is, somehow, the reanimated form of Alec Holland, who became the unwitting subject of his own experiments. Despite his grotesque appearance, Alice is able to see the man still inside, and is even a little smitten after Swamp Thing jokes about whether his severed arm hurts: “Only when I laugh.” Anton Arcane is determined to replicate Holland’s formula, and when he learns Swamp Thing’s true identity he uses Alice as bait to capture him. Swamp Thing is brought back to Arcane’s palatial home deep in the swamp and chained up in a dungeon, along with Alice. Arcane holds a dinner party, and the guest of “honor” is his top henchman Bruno (Nicholas Worth).

Arcane uses Bruno to unwittingly test Holland’s mixture, which doesn’t work out well for anyone involved. Swamp Thing informs Arcane that there’s nothing wrong with the formula, it simply amplifies what is already there—garbage in, garbage out, as it were. Arcane’s ego is so massive that later on he willingly takes the formula himself, assuming his off-the-charts genius will be the thing that gets turbo-charged. 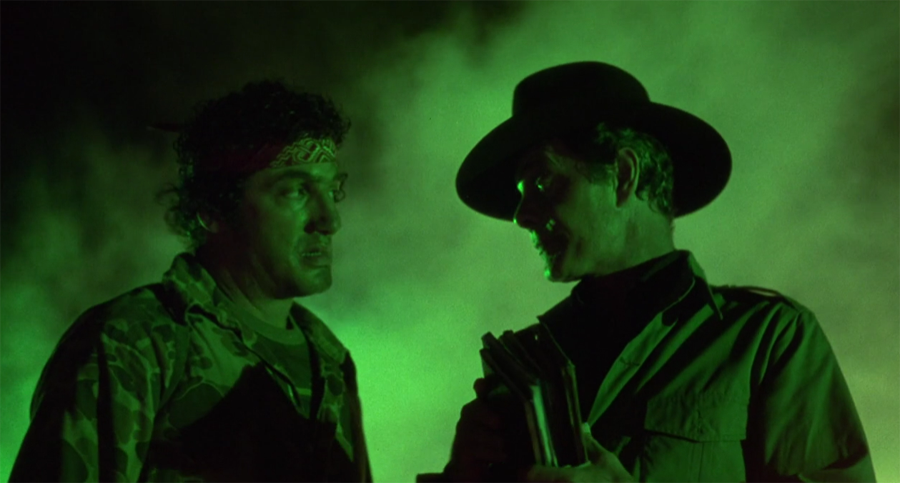 Unfortunately for him (and the film’s budget), all that really means is Arcane is transformed into a sort of wolf-like creature who runs around growling. Arcane and Swamp Thing have a final battle in the swamp, leading to Arcane’s demise. Alice is wounded during the fight, but Swamp Thing heals her. She offers to help Alec continue his work, to try and find a cure for his condition. He turns her down, saying she needs time to heal, but assures her that if she ever needs him, Swamp Thing will be there.

In many ways, Swamp Thing is what a lot of people have written it off as—namely, a cheap monster movie. Craven found the purse strings knitted so tight, he had to make a lot of sacrifices just to get the film made, sometimes losing whole scenes from the screenplay. Shooting almost entirely during the day does the Swamp Thing costume no favors—there are many scenes where it’s painfully apparent our hero is running around in a rubber suit.

The film had originally intended to have Ray Wise in costume, but the physical differences between him and stuntman Durock were so great that the title role ended up going, by default, to Durock. He’s fine in the role, but one wonders what might have been if Wise could have been there to do the heavy lifting. His scenes with Barbeau are too brief to really establish a deep connection between the characters, so when he disappears from the film a third of the way in, it’s a real loss. All that said, Swamp Thing’s dialogue is limited to just a few well-chosen, eloquent turns of phrase, and to me they’re quite effective. (Coincidentally, having Swamp Thing be played by two different people nods to the fundamental changes Alan Moore would make to the Swamp Thing character just a few years later)

As a Red-Blooded American Male, I love Adrienne Barbeau, and Alice Cable has always been one of my favorite roles of hers. A combination of two characters from the comics (Matt Cable and Abby Arcane), Barbeau’s Alice is a tough and sexy dame, always giving her dialogue a flinty spin that has helped sell some of the more ridiculous stuff Barbeau has had to say over the years. When she first meets Alec Holland she gives him a series of side-eye glances, but then softens when she sees how dedicated he is to making the world a better, safer place.

As an adolescent seeing the movie during its original 1982 theatrical run, I also enjoyed her brief nude scene, when Alice takes a moment to bathe in the swamp (ewww). But as an adult (hollow laugh) I have to admit the scene is beyond gratuitous, though I can’t blame Swamp Thing for sneaking a peek. Movie legend Louis Jourdan (Gigi, Octopussy) has fun with the role of Anton Arcane, chewing on his dialogue with relish. Arcane is so in love with his own intellect that even in his scenes with a comely young assistant (Mimi Craven), he seems completely disinterested, almost asexual—all he cares about is the world bowing his genius. When his loyal henchman Bruno is writhing in agony during his chemically induced transformation, Arcane looks like he doesn’t care one bit.

Craven uses some comic book panel-esque wipes as scene transitions, and fills the frame with eye-popping shades of green, making Swamp Thing a very pretty film to look at, despite its low budget. While it doesn’t come close to replicating the stunning, moody visuals Bernie Wrightson brought to the original comic-book series, Craven gives his movie a distinctive look and feel that I think helps envelop the viewer, really giving them a sense of place. We never see any semblance of the world outside these murky swamps, a nice, claustrophobic choice.

Knowing a big-screen movie was coming down the pike, DC Comics gave Swamp Thing his own comic again in 1982, titled Saga of the Swamp Thing. That book followed the original comics continuity, so when it came time to adapt the film, DC chose to do it in an Annual, using the film’s beautiful painted poster as its cover. Written by Bruce Jones and drawn by Mark Texiera and Tony DeZuniga, the comic book of course works best during the Swamp Thing scenes. Not limited by budget, this is the Swampy we all know and love, giving us much more elaborate action sequences. The comic doesn’t have the same color palate of the film, unfortunately giving the whole thing a bit of drab, ordinary look. And, of course, no nude scene (stupid Comics Code!). But as a one-and-done memento of the movie, it works fairly well as an alt-universe version of the character. Swamp Thing was not much of a hit, though it got some positive reviews from some unlikely sources (the legendary film critic Roger Ebert gave it three out of four stars). Despite a generally unfavorable working experience (which he details on an audio commentary track he recorded for the DVD), it kept Wes Craven’s career afloat long enough for him to make Nightmare on Elm Street just a few years later, propelling the horror maestro into another phase of his career.

Despite Swamp Thing’s middling response at the box office, the character just kept shambling along. His book became the bedrock upon which DC would build its Vertigo imprint. There would be a second film (Return of the Swamp Thing, about which less said, the better), a live-action TV series, and a cartoon. Strangely, just as the Swamp Thing title was pushing the envelope for what could be done in a mainstream comic series, the sequel and TV series took a campier approach, seemingly more inspired by the worst excesses of the Batman and Wonder Woman TV shows of the past.

Wes Craven’s Swamp Thing stands alone as a cinematic hybrid worthy of Dr. Alec Holland himself. It uses the essential elements of the comic-book series and adds in other inspirations, filtered through the eye of one of cinema’s most stylish genre directors. The result is a unique version of the character, never to be repeated. It’s a little gem of a movie… if only you look.

Rob Kelly is a writer/artist/comics and film historian. He is the co-host of Aquaman and Firestorm: The Fire and Water Podcast, the host of The Film and Water Podcast, and the host of TreasuryCast, a show devoted to the greatest comics format of all time, the treasury edition. He would one day like to be rescued by Adrienne Barbeau.