UPDATED 6/1/21: Ron Ely’s cult-fave Doc Savage: The Man of Bronze was released in June 1975 (the closest we could find to a release date) and with today the first of the month, it seemed like a good time to re-present this 2017 piece by Rob Kelly. You can also check out Rob’s episode of The Film and Water Podcast about it too. Click here. — Dan

Doc Savage was Superman before Superman. Possessor of a brilliant intellect, enhanced strength and a remote base of operations called the Fortress of Solitude, the man known as Clark(!) Savage Jr. was a creation of three men: Henry W. Ralston, John L. Nanovic and Lester Dent. Dent was the man who wrote most of Doc’s adventures for various pulp magazines of the 1930s and ’40s, and built the world that Savage would inhabit.

Despite the character’s popularity in the pulps, his owners Street & Smith couldn’t drum up much interest in the character when it came to other media, outside of a short-lived radio show. Hollywood didn’t attempt any live-action adaptations for decades. A set of producers, Mark Goodson and Bill Todman, got close in the mid-1960s, trying to capitalize on the re-issued pulp novels (featuring staggeringly beautiful painted covers by artist James Bama) and the growing James Bond craze. But legal issues thwarted them and it would be another decade until the Man of Bronze finally hit the silver screen. 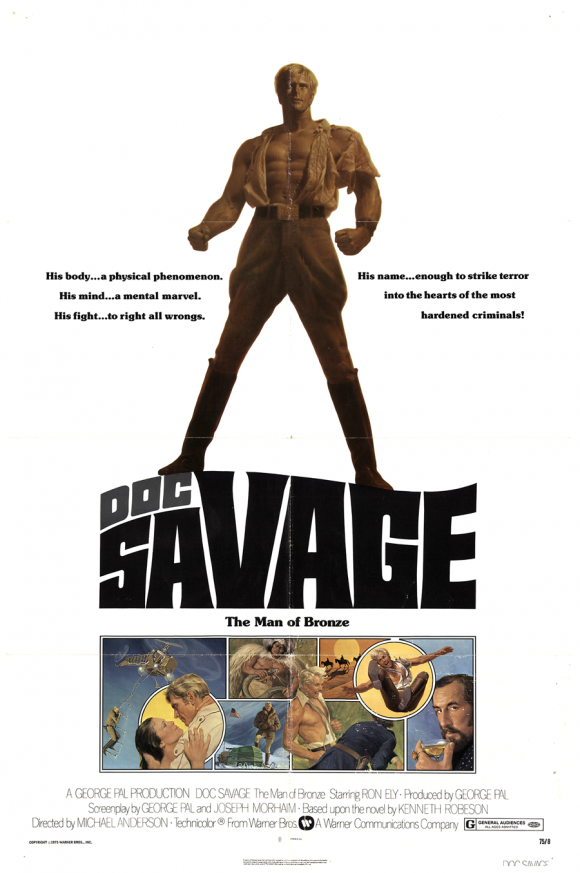 In 1975, legendary producer/director/animator George Pal succeeded where Goodson and Todman did not, and got Doc Savage: The Man of Bronze made, with the help of Warner Bros. Directed by Michael Anderson (Around the World in 80 Days, Logan’s Run), the film starred Ron Ely (TV’s Tarzan) as our hero, with William Lucking, Michael Miller, Eldon Quick, Darrell Zwerling and Paul “You mess with the bull, you get the horns” Gleason as Doc’s team of highly-skilled, brave compatriots, The Fabulous Five: Renny, Monk, Johnny, Ham and Long Tom.

Nostalgia for 1920s and ’30s culture was sweeping the nation in the 1970s, and that feeling is present in Doc Savage: The Man of Bronze from the first frame. Set to a score by John Philip Sousa (patriotically spelled SoUSA in the credits), the film opens with newsreel-style narration over shots of the Arctic Circle. Doc is making his way to his Fortress, but he has time to stop and look into the camera, where an animated “twinkle” in his eye appears, complete with a “ding!” on the soundtrack. Uh-oh. 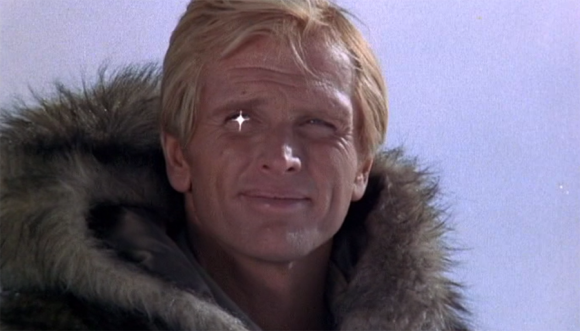 After being introduced to the Fabulous Five, the plot gets under way: In 1930s New York, a man wearing a loincloth and carrying a rifle is seen scaling the skyscraper that is Doc’s official headquarters. He fires off a shot, which misses thanks to specially designed refracted glass that distorts the view from outside. Doc confronts the would-be assassin, but before he can get any info, the man slips and falls to his death. He has fingertips that look dipped in blood, and is bearing a strange snake tattoo on his chest.

When they return, Doc and the team see that their office has been ransacked, and the research papers of his father, Clark Savage Sr., have been destroyed. 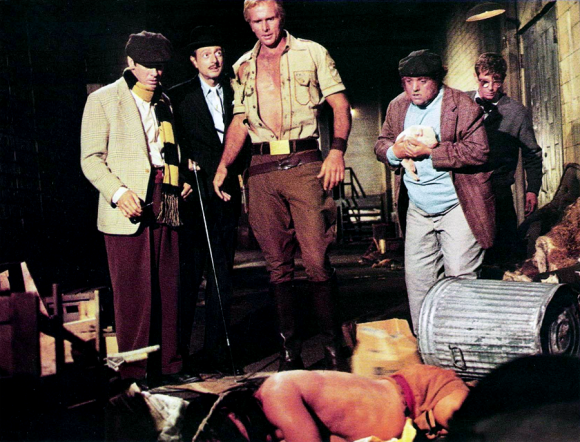 The trail leads to the unexplored region of Hidalgo, where Doc’s now-deceased father was given a large land grant. The international criminal and smuggler known as Captain Seas (Paul Wexler) subjects Doc and his team to repeated murder attempts, but of course our heroes survive them all thanks to their courage, bravery and wits. Also involved is a corrupt government official named Don Rubio Gorro (Bob Corso) and Gorro’s comely assistant Mona Flores (Pamela Hensley), who of course takes a shine to the Man of Bronze (sorry, couldn’t help myself).

Throughout its 100-minute running time, Doc Savage: The Man of Bronze toggles uneasily between straightforward, pretty decently staged adventure sequences and embarrassingly unfunny subpar camp gags reminiscent of the Batman TV series. That series’ quirky tone was deceptively hard to pull off (sometimes even the show itself couldn’t do it). There really hadn’t been any superheroes done in live action between Batman going off the air in 1968 and Doc Savage, so it’s almost as if George Pal and his screenwriters simply didn’t know there was any other way to approach this material. 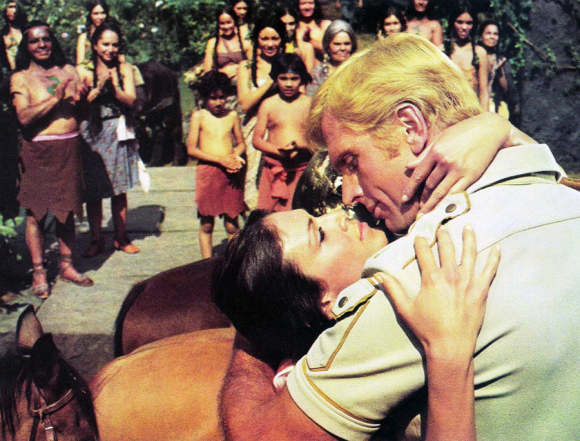 In particular, the Gorro character is played entirely for comic relief (in theory), sleeping in a giant baby crib, mugging furiously and scurrying about to the tune of La Cucaracha. During a scene between Doc and Mona where she expresses her feelings for him, Doc tells her “Mona, you’re a brick.” (I still don’t even know what that means.)

The campiness reaches unbearable levels during the final fight scene between Doc and Captain Seas, where they engage in an assortment of fighting styles, each one helpfully listed on screen, complete with sound cues. During what should be the film’s climactic battle, I longed for the relative dignity of Surf’s Up, Joker’s Under. And don’t even get me started on Doc Savage performing brain surgery on Captain Seas so he’s not evil anymore. Ick. 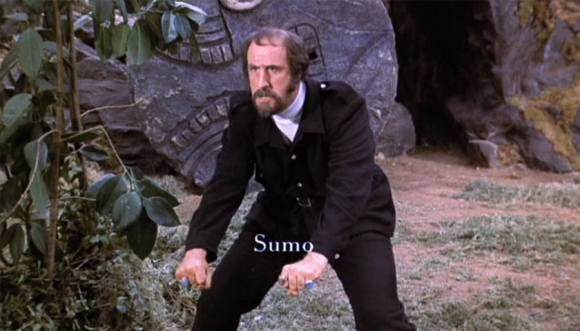 That said, I find it difficult to completely dislike Doc Savage: The Man of Bronze. It moves along at enough of a clip that you don’t get too bored, the James Bond-esque gadgets are fun, the opening scene at Doc’s NYC HQ is superb (with the help of a great matte painting), and any movie that casts cult actor Michael Berryman in a non-psycho role can’t be all bad.

Despite all the superhero films that have come down the pike since, Doc Savage has built up a bit of cult following, earning itself a Blu-ray release from the fine folks at Warner Archive just last month. It’s got a certain something that keeps it from being entirely dismissed and thrown onto the superhero-movie junk pile along with Howard the Duck, Man-Thing and Batman and Robin.

Marvel must have thought the film was going to be a huge hit, for they obtained rights to the character and that same year released Doc Savage as part of their black-and-white magazine line, complete with a cover taken from the movie’s poster.

Strangely, the magazine never adapted the film during its eight-issue run, instead offering brand-new adventures written by the always-inventive Doug Moench and John Buscema. Unfortunately for everyone involved, Doc Savage: The Man of Bronze bombed at the box office, crushed by the unexpected juggernaut that was Jaws, released the same month. It would be the final film of George Pal’s career, even though he felt confident enough about its chances to promise a sequel (Doc Savage: The Arch Enemy of Evil) at the final scene. But it was not to be. 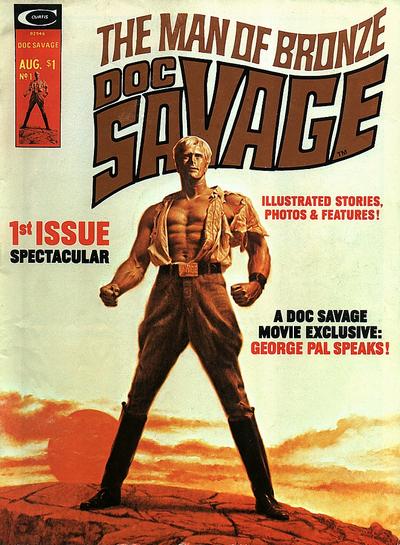 Could a live-action Doc Savage have worked with a different approach? It would have been interesting to see what the 1960s version might have looked like, and we can get something of an idea thanks to the one-shot “adaptation” Gold Key Comics published in 1966. The story, The Thousand-Head Man, was to be plot of the film, based on one of the original pulp novels.

Sporting a typically beautiful cover by James Bama, the story centers around three keys that lead to the titular many-noggined man. A mysterious figure tosses one of the keys to Doc Savage as he arrives at a London airport, leading to numerous attempts on Doc’s life to get it back. 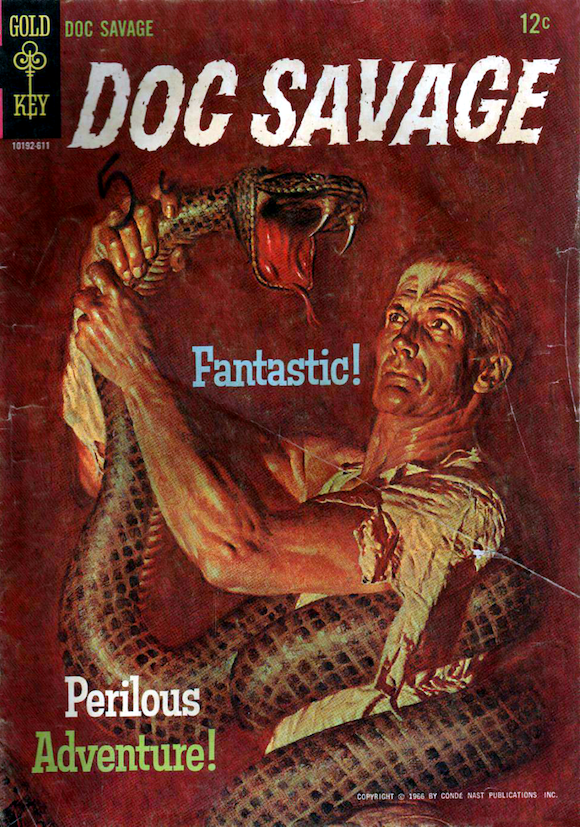 Aside from some unfortunate racial stereotypes, The Thousand-Headed Man isn’t a bad adventure at all, and since it came before the Batman TV show, there’s no attempts at camp humor. Curiously, artist Jack Sparling draws Doc as looking pretty wrinkly and weathered, not exactly the glowing pillar of manliness we’ve come to expect. Lantern-jawed actor Chuck Connors was penciled in to play Doc in the aborted film, and you can see a bit of his likeness in Bama’s cover. 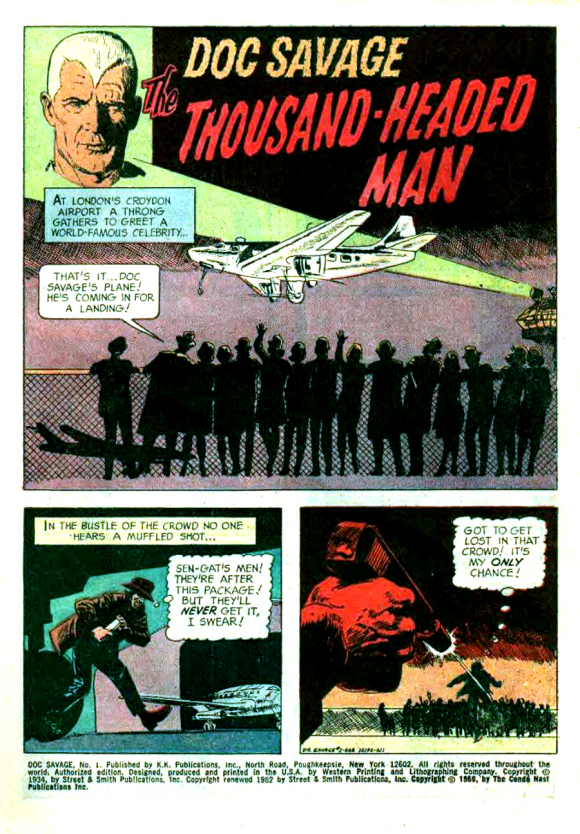 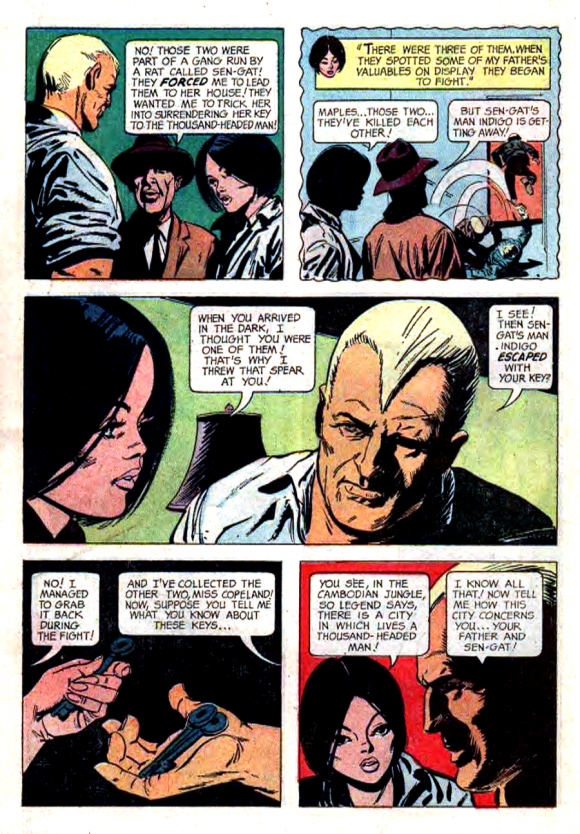 Doc Savage will get another shot at movie stardom, when movie mega-star Dwayne “The Rock” Johnson takes over the role in a film directed by Shane Black (Kiss Kiss Bang Bang, The Nice Guys), two men who have shown they can handle action and comedy with a light touch. Will this film effort turn the Man of Bronze into a household name like Superman, Spider-Man, Batman and Groot? Hard to say, but casting the effortlessly charming Johnson seems like a step in the right direction.

Somewhere, I bet Lester Dent got a twinkle in his eye when he heard the news. 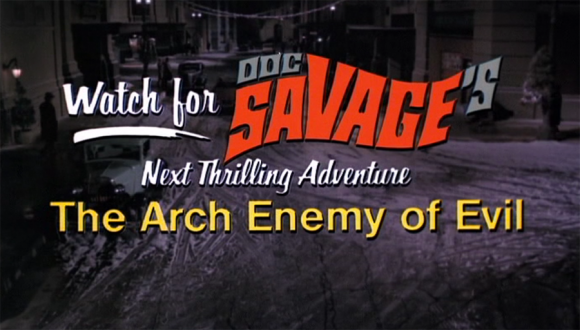 Rob Kelly is a writer/artist/comics and film historian. He is the co-host of Aquaman and Firestorm: The Fire and Water Podcast, the host of The Film and Water Podcast, and the host of TreasuryCast, a show devoted to the greatest comics format of all time, the treasury edition. His dream Doc Savage casting would have been Charlton Heston circa 1955.