A birthday tribute to one of comics’ greatest writers… 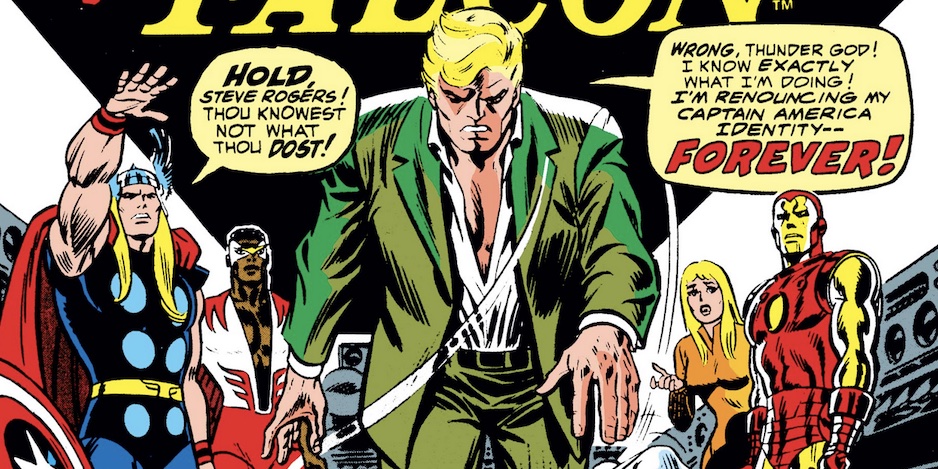 As a young comic book reader, I was fortunate to have some really great stories right off the bat, stories that have stuck with me all these years. One of those tales is the Secret Empire saga by writer Steve Englehart.

How cool is it that my very first issue of Captain America plunged me into a story that not only cemented my perception of Cap as a character for all time, but also introduced me to what would become two of my most favorite Marvel heroes, the Falcon and the Black Panther? 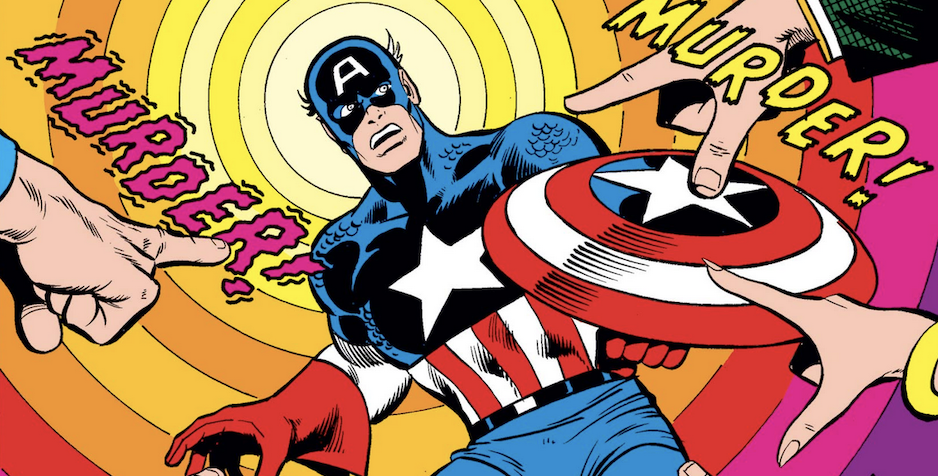 It’s Steve Englehart’s birthday (he was born 75 years ago on April 22, 1947) and I can think of no greater tribute to him today than a personal look at this saga—and a saga it is, one that stretches across the Marvel Universe, is pencilled by the great Sal Buscema, and made an 8-year-old kid believe a man could sling a shield in defense of his country and beat the baddies at every turn.

1. Cap. I must’ve known who Captain America was before my dad bought me my first issue, but if I didn’t, I sure did after reading the Secret Empire story. Two things really stick out in my mind: Steve Rogers’ internal struggle over fighting police officers when he’s accused of murder, and his concern over deceiving people when he later goes undercover to investigate the plot against him. Those illustrated his character to me more than anything else. 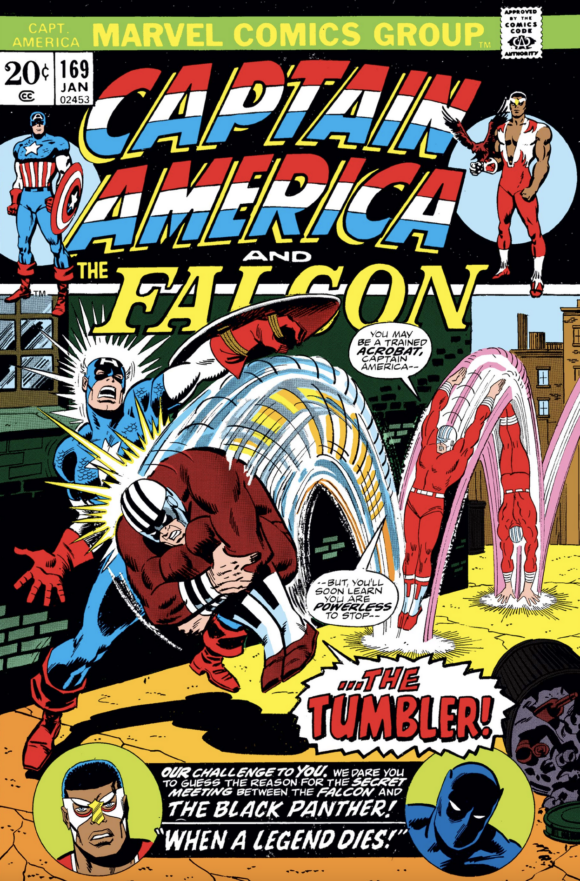 2. Falcon. I know I didn’t know who Sam Wilson was before this story, but I fell for him hard in short order. He was as cool as Cap, but in a different way, and I love that these are the issues where he got his wings and truly began to fly as his own person. 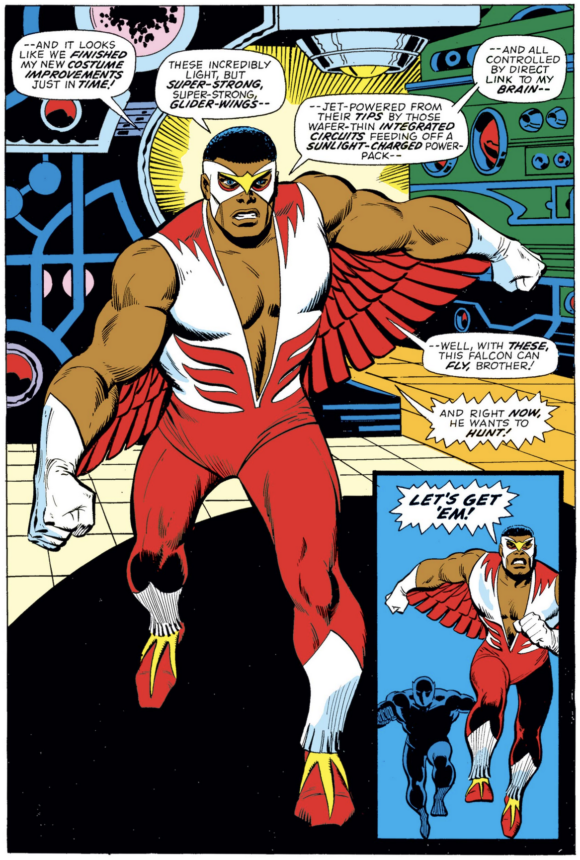 3. Black Panther. This is also my introduction to T’Challa and the wondrous land of Wakanda. He’s not a major player in the story, but his presence along with Falcon opened my eyes to the idea of black characters in comics and how they can be as cool — if not cooler — as the heroes who looked more like me. 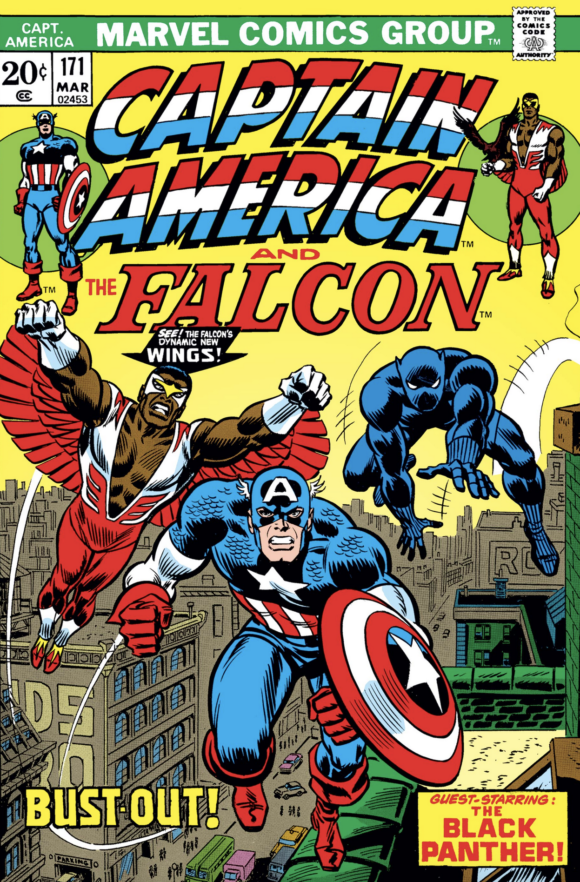 Romita, with an inks assist by Tony Mortellaro

4. That First Issue. Full disclosure: I came in on Captain America #170. I know that the Secret Empire saga technically begins with #169, but the beauty of Englehart’s (and here, Mike Friedrich’s) writing and plotting is that I got everything I needed to know from the first few pages… and then Cap’s on the run! Moonstone! Falcon and Black Panther! In Wakanda! And a jailbreak! All in my first issue! Whew! 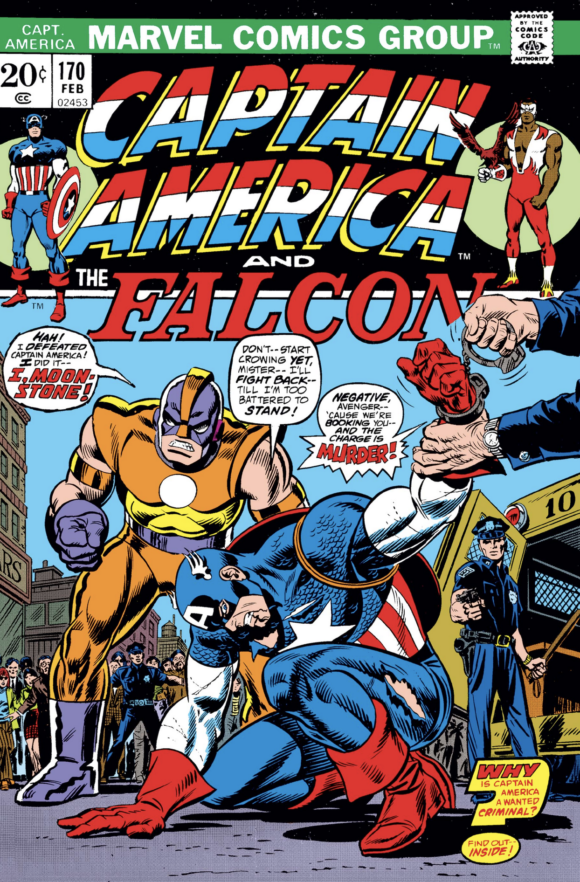 5. Iron Man. OK, yeah, ol’ Shellhead only appears briefly in Captain America #171, but if I’m not wrong, it was the first meeting between him and Falcon. For a kid like me, it was damn cool to have yet another Marvel hero show up in the story and make the Avengers’ presence known. 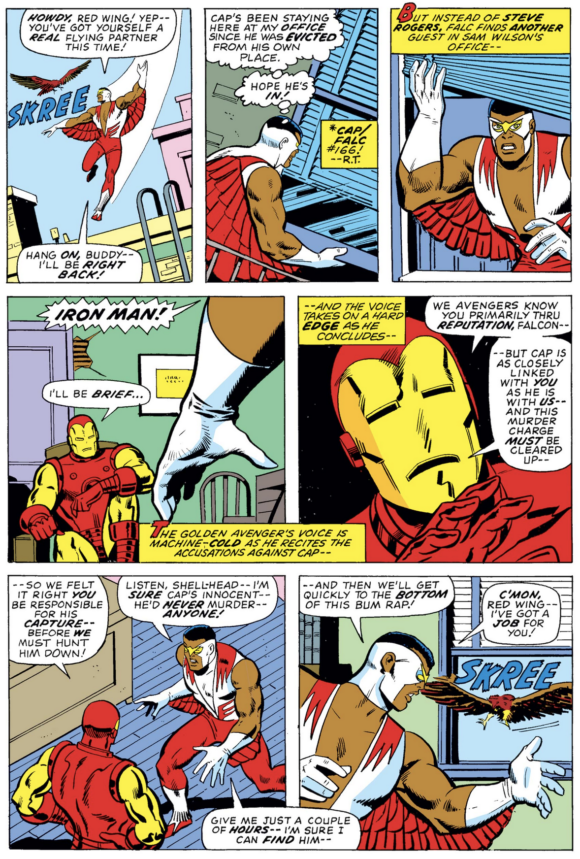 6. The X-Men. Believe it or not, I think Captain America #173 was my intro to Marvel’s Merry Mutants. I mean, how mind-blowing it was to not only have all these heroes like Cap and Falc and Panther and Iron Man, but then that issue hits and suddenly I have these X-Men guys (and gal) and things got even weirder and woolier and more wonderful. 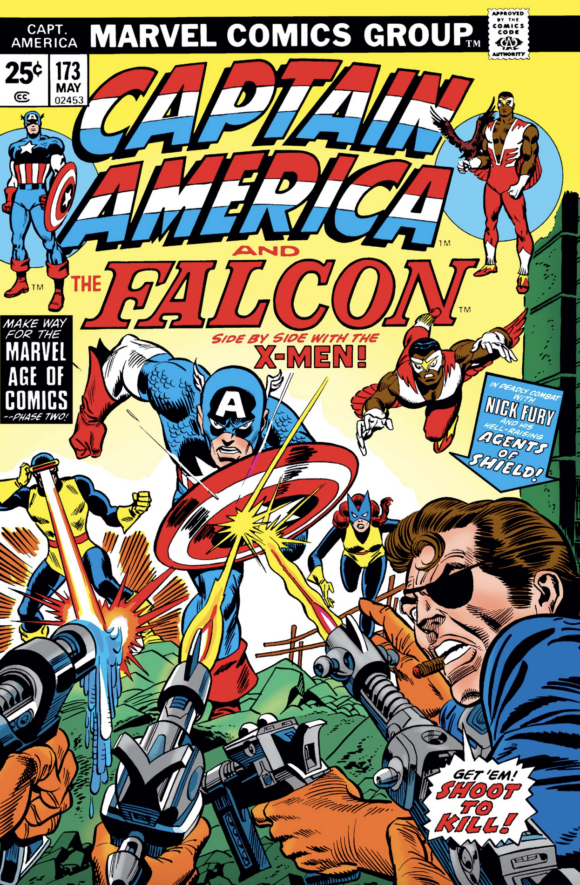 7. Undercover. I mentioned it previously, but Steve and Sam go undercover not once, but twice in the course of the story, the first with just overcoats to cover their costumes while they hitchhike (!) to Nashville, and the second time a fuller disguise job (such as it was). Both moments have both funny and poignant beats, making them two of my favorite scenes from these issues. 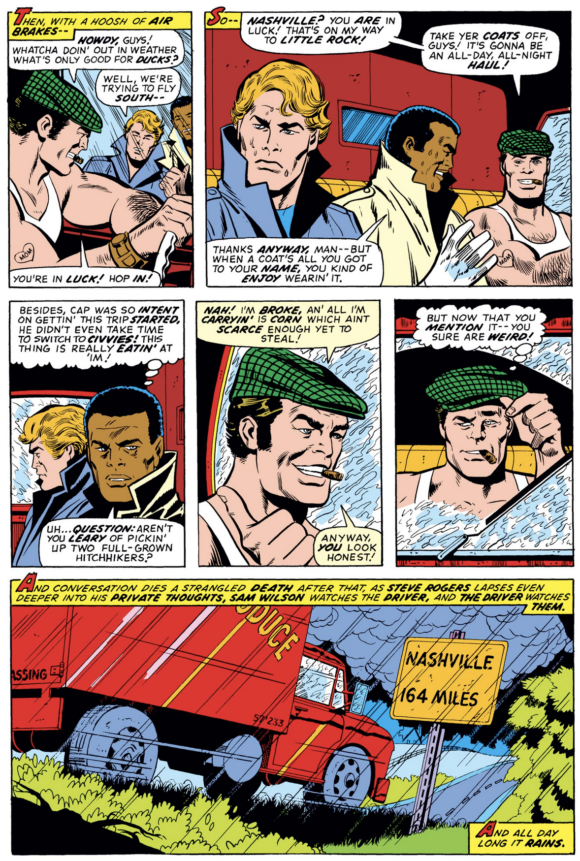 8. The Secret Empire. The baddies in the saga are not only bad, they’re also scary. I remember as a kid thinking how spooky they were in their all-encompassing hoods and numbers-instead-of-names — not to mention the incredible, in-depth organization they had right under everyone’s noses. They remain one of the best stealthy antagonists of all the comics I’ve read. 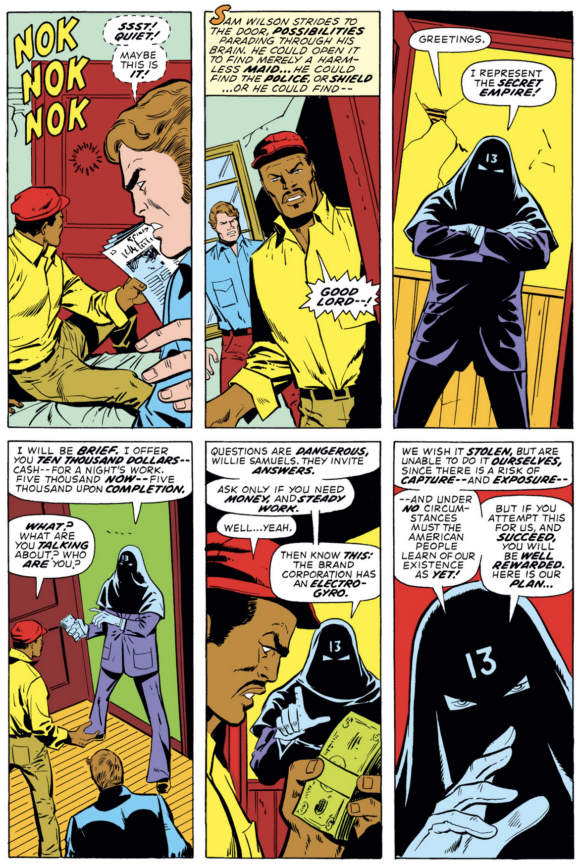 9. The Robot. What’s a defeat-the-evil-organization tale without a killer robot? The Secret Empire’s got one; it’s right there on the cover of Captain America #174 and on the inside, too. It didn’t last long against Cap and Falc, but I always loved the moment it appeared, screeching “You shall go no FARTHER, intruders!” and looking pretty badass. 10. Moonstone. True story: I didn’t like Moonstone as one of the main adversaries in the story as a kid, but I’ve grown to appreciate him as time went on. It’s a clever set-up, him posing as Cap’s replacement while secretly on the bad guys’ payroll. I also really dig that he’s the foundation stone — pun intended — in a Moonstone legacy that’s been around a while now in the Marvel Universe. Plus, Cap’s takedown of the joker is classic. 11. Mutants. Did any kid back then turn to that two-page spread in the aforementioned Captain America #174 and not drop their jaw in awe? I sure the heck did — who were all these guys? I knew Beast and Iceman and Angel, but Lorna Dane? Unus? Mastermind? Mesmero? (I still don’t know who that is.) What an uncanny thing to stick into the middle of a Captain America story! I loved it. 12. Flashbacks. Like so many comics of its time, the saga is filled with flashbacks, but as bewildering as they were to me as a young reader, I just grooved on them the most. Check out Page 6 of Captain America #173 — it’s a cornucopia of flashbacks! Stuff I didn’t know, but Englehart felt I needed to know! And then even more in Captain America #175! Who said it wasn’t the Marvel Age of Furious Flashbacks? 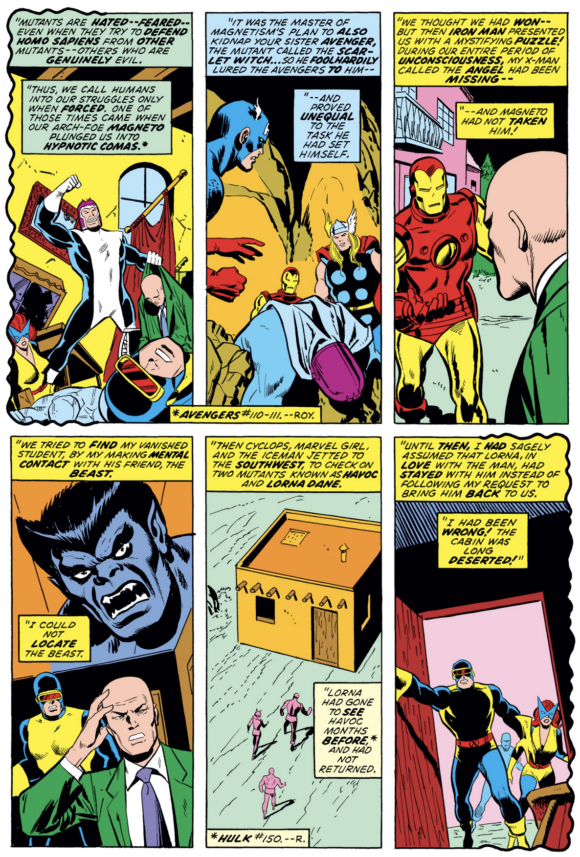 13. The Ending and the Aftermath. Much has been said (ad nauseum) about the ending of this story, so I won’t belabor it, save to give Englehart credit for even attempting it, but I do want to give a significant shout-out to the fallout from the saga, especially the amazing overview of Cap’s career in Captain America #176, and the Nomad offshoot that begins in Captain America #180. What a time to be a comic book fan… Romita. (Note from Dan: This was MY first issue of Cap!)

CAPTAIN AMERICA and the Legacy of SECRET EMPIRE, by STEVE ENGLEHART. Click here. 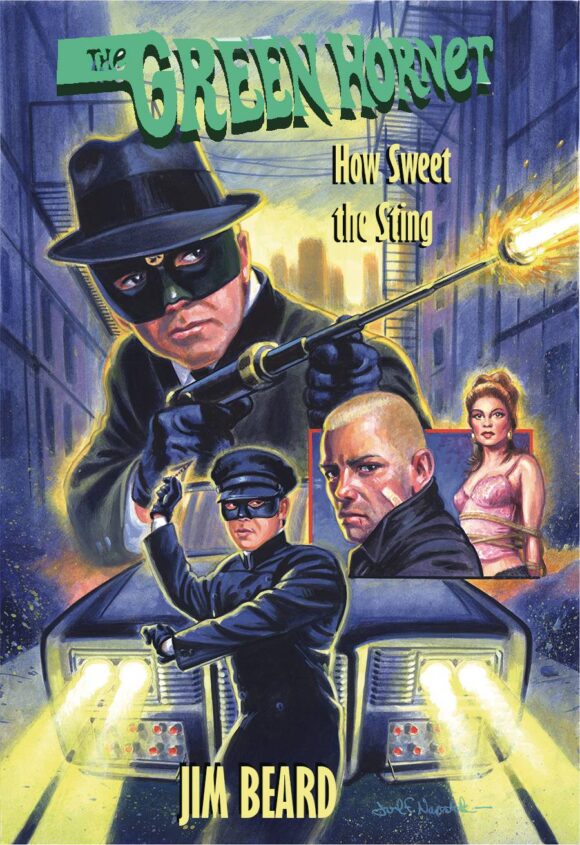