A GREEN LANTERN WEEK edition of THE FILMATION FILES…

Green Lantern was another DC hero who made his screen debut in Filmation’s 1960s “super superhero” shorts — along with the Justice League (click here), the Flash (click here), the Atom, Hawkman and the Teen Titans. 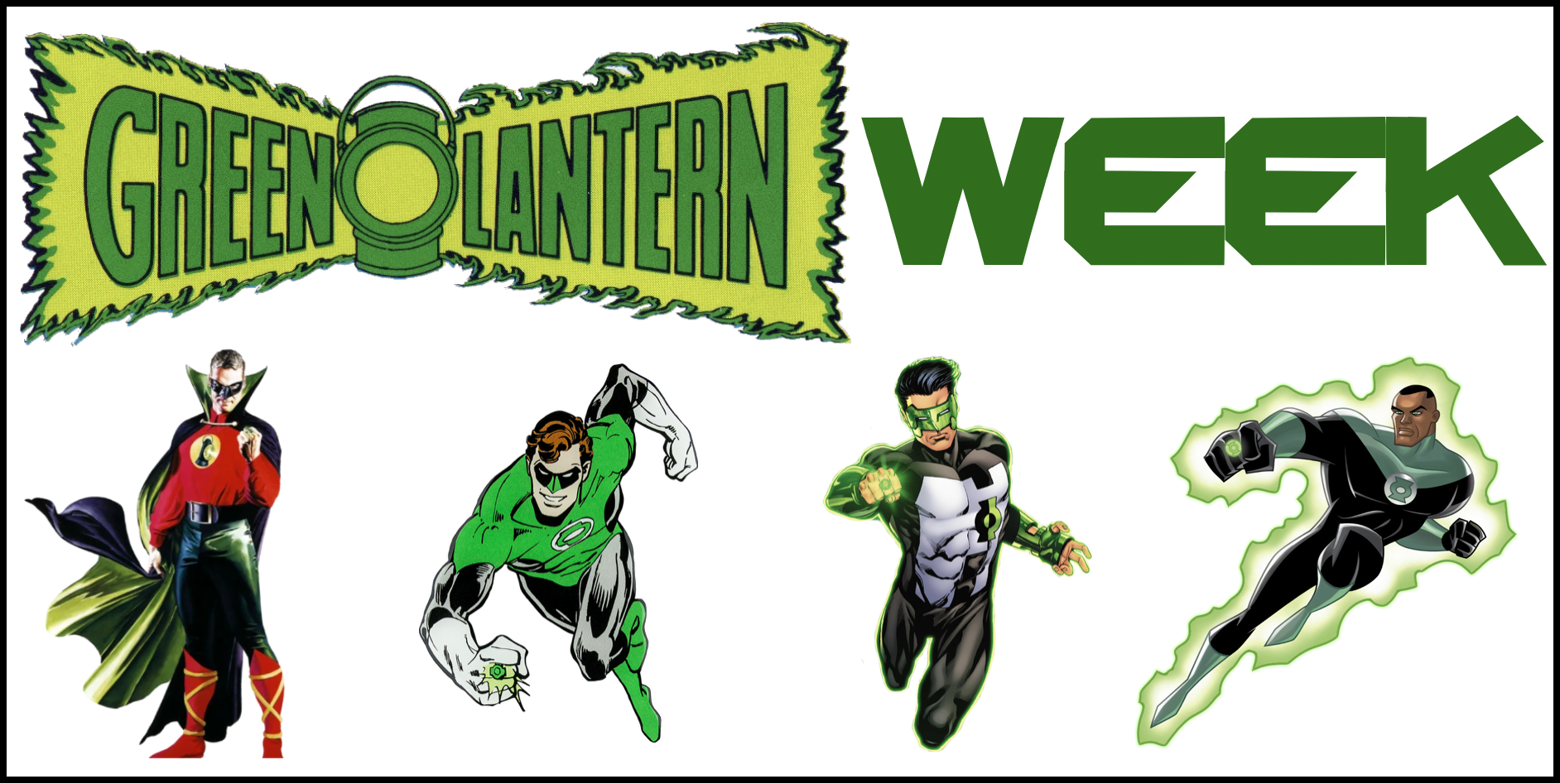 1. Like most of these segments, the Green Lantern episodes have a great opening sequence, with John Gart’s peppy theme accompanied by Ted Knight’s stentorian narration and dynamite visuals, complete with Filmation’s signature strobe effect. Dig this:

2. I love the way Oa looks from deep space, with it’s triple rings and flaming heart. Now correct me if I’m wrong but I think that’s a total Filmation invention. I don’t believe the planet looked like that in Gil Kane’s Silver Age issues but it’s been awhile since I’ve read them. Either way, man is that cool. 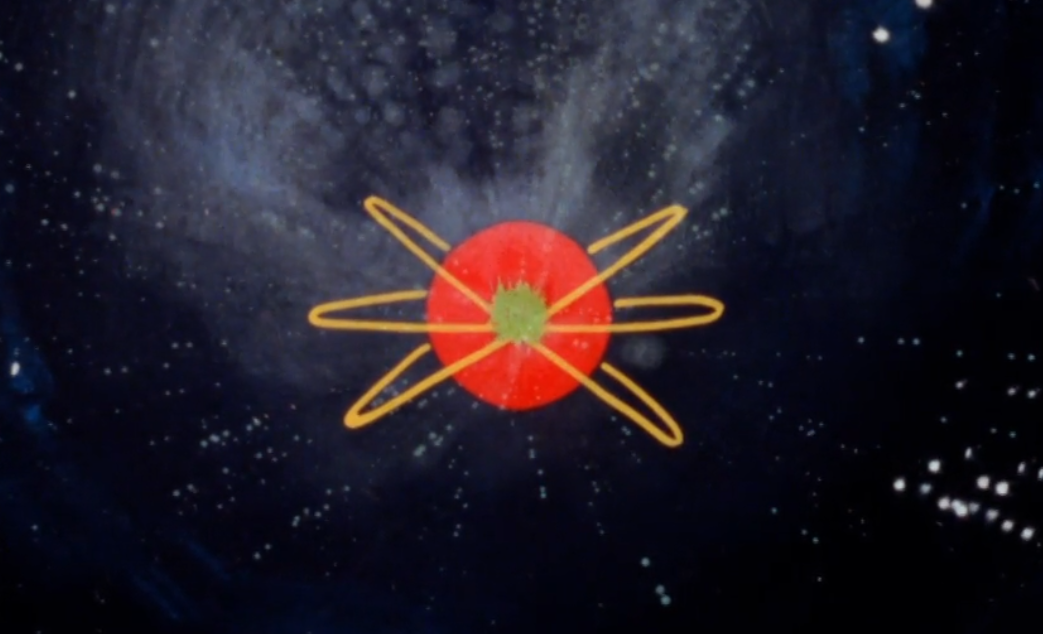 3. Of all the Filmation “super superheroes,” Green Lantern (voiced by Gerald Mohr) is the closest to on-model. His outfit is exactly the same as Kane’s wonderful design, though his all-black mask is more of a domino than GL’s classic face covering. 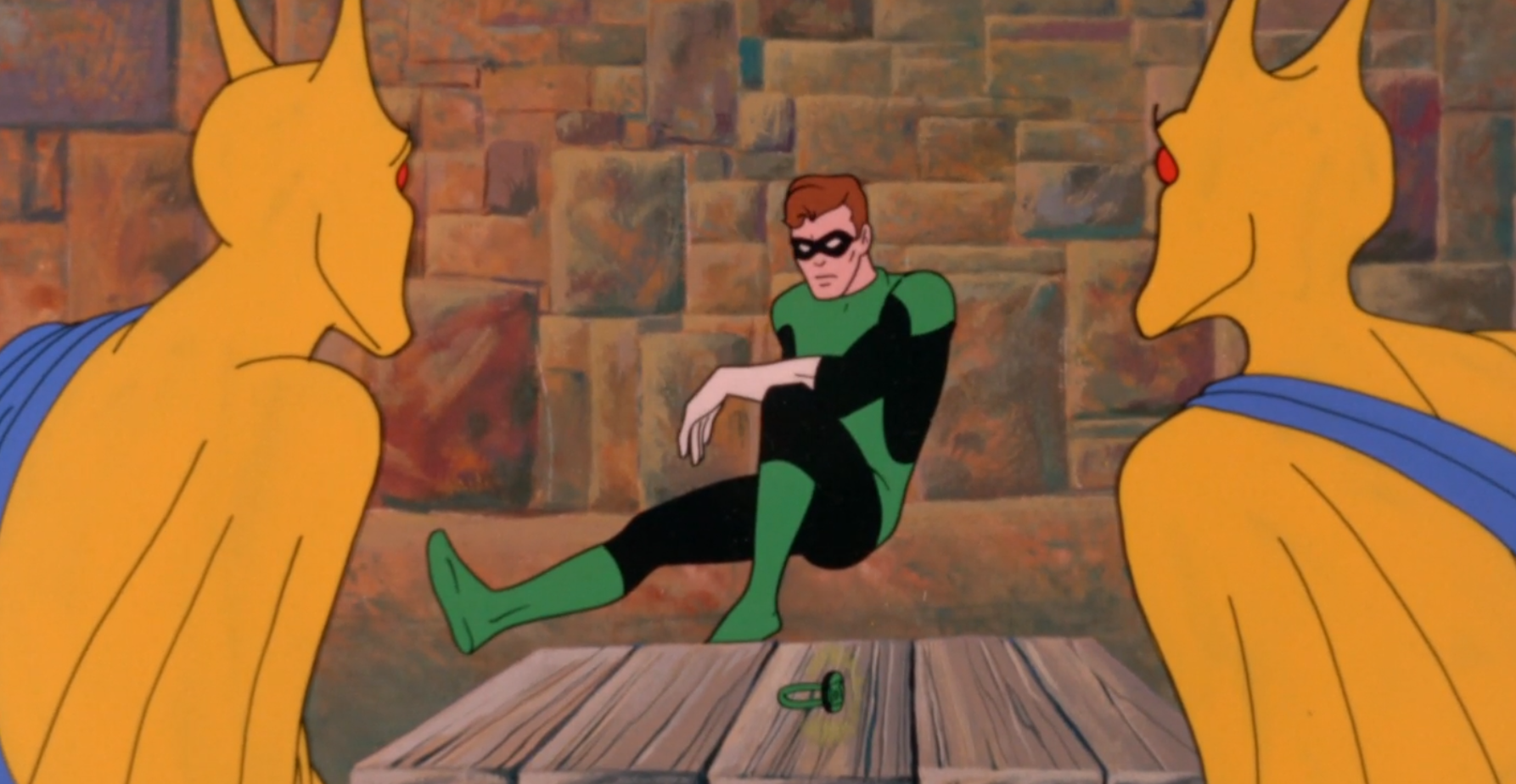 GL doing his best Steve McQueen in The Great Escape.

4. Speaking of Kane, once again the Filmation animators did an uncanny job of emulating a comics artist’s style. Aquaman looks like Nick Cardy’s Aquaman. Superman looks like Curt Swan’s Superman. Batman looks like Carmine Infantino’s Batman. This doesn’t extend to every character but it certainly does to Hal Jordan — especially when they show the close-ups of his pupils. 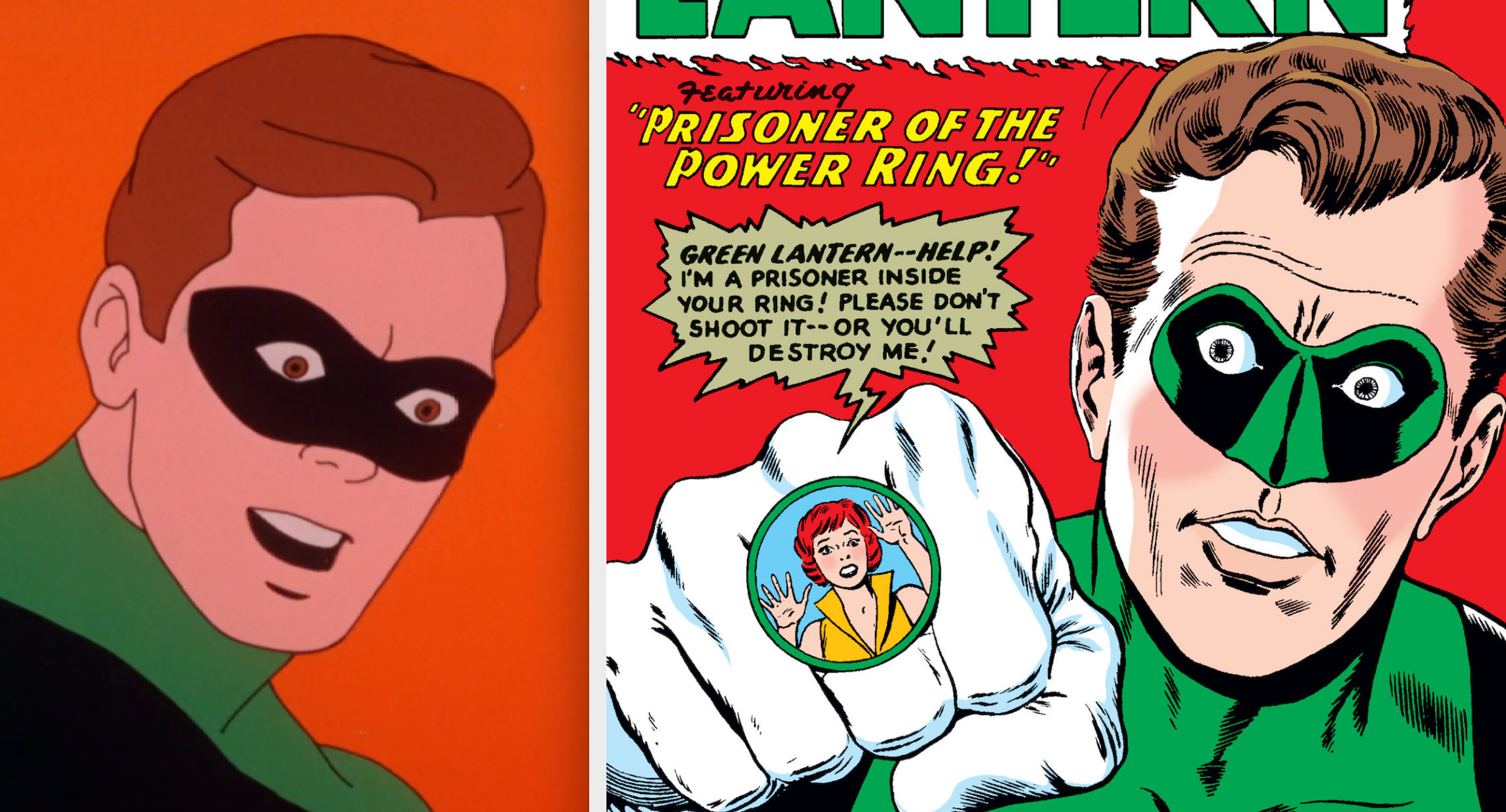 5. Now, as far as being wayyyyyy off-model, why in the universe are the Guardians Caucasian? My simple theory is that it’s because Filmation changed Hal Jordan’s Inuk comics sidekick Tom Kalmaku — who carried the racially insensitive nickname “Pieface” — into a blue Venusian named Kairo. So to avoid confusion, I’m guessing they decided not to make the Guardians blue. But couldn’t Kairo have been a different color? Strange. 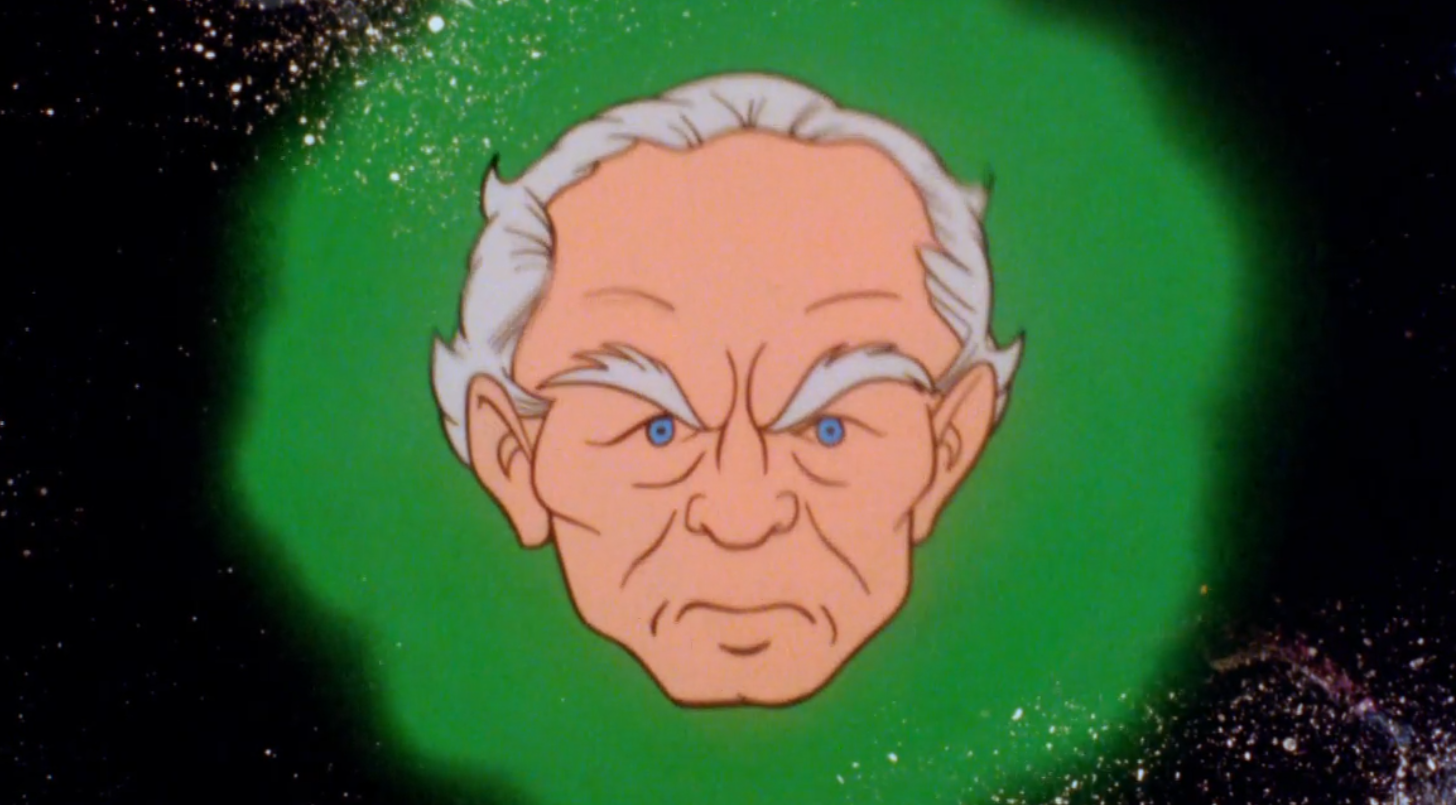 6. By the way, it’s also weird that Tom shows up as a Caucasian junior test pilot, giving Hal two proteges to look after.

7. Sirena, Empress of Evil is the best of the three segments, hands down, because it’s loaded with kitsch — from the goofy-looking yellow bat-creatures to Sirena’s over-the-top histrionics to the oddball introduction of Beepee (which I swear sounds like “Peepee” when Kairo says it) to the eyebrow-cocking way Kairo rides Green Lantern’s back. 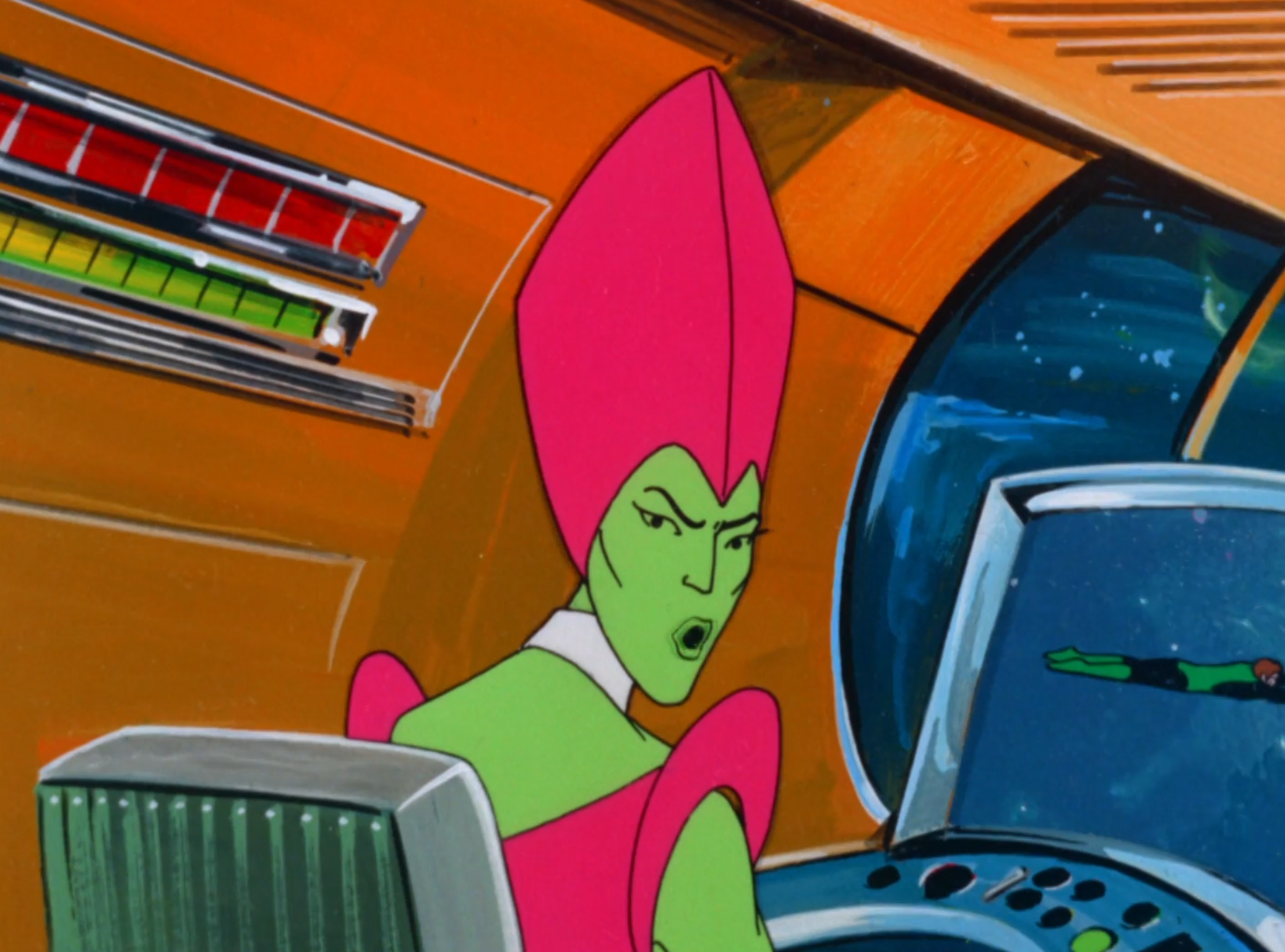 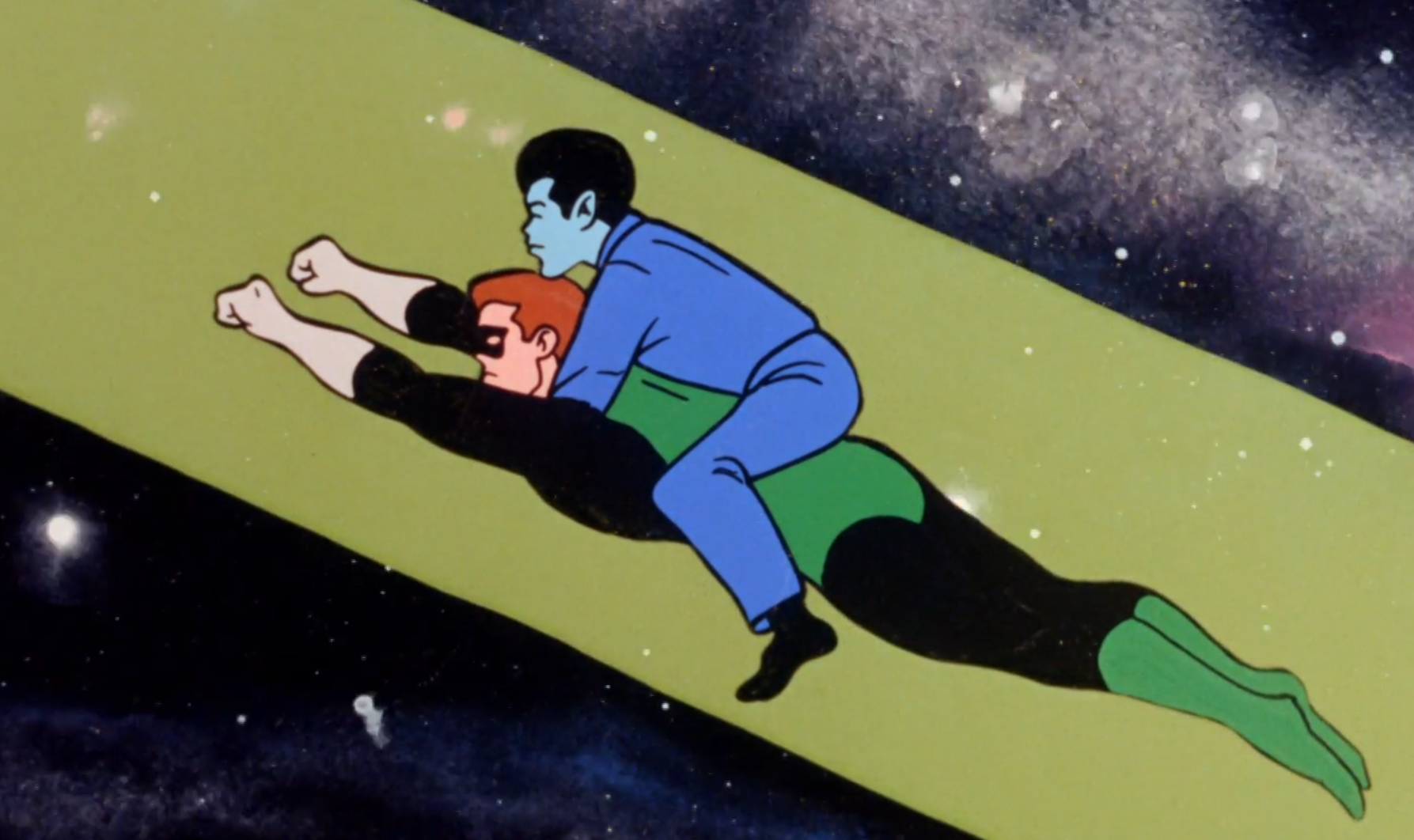 9. But hey, why does GL’s ring work against the yellow bat-creatures? Come to think of it, I don’t believe the yellow weakness comes up at all in any of these. 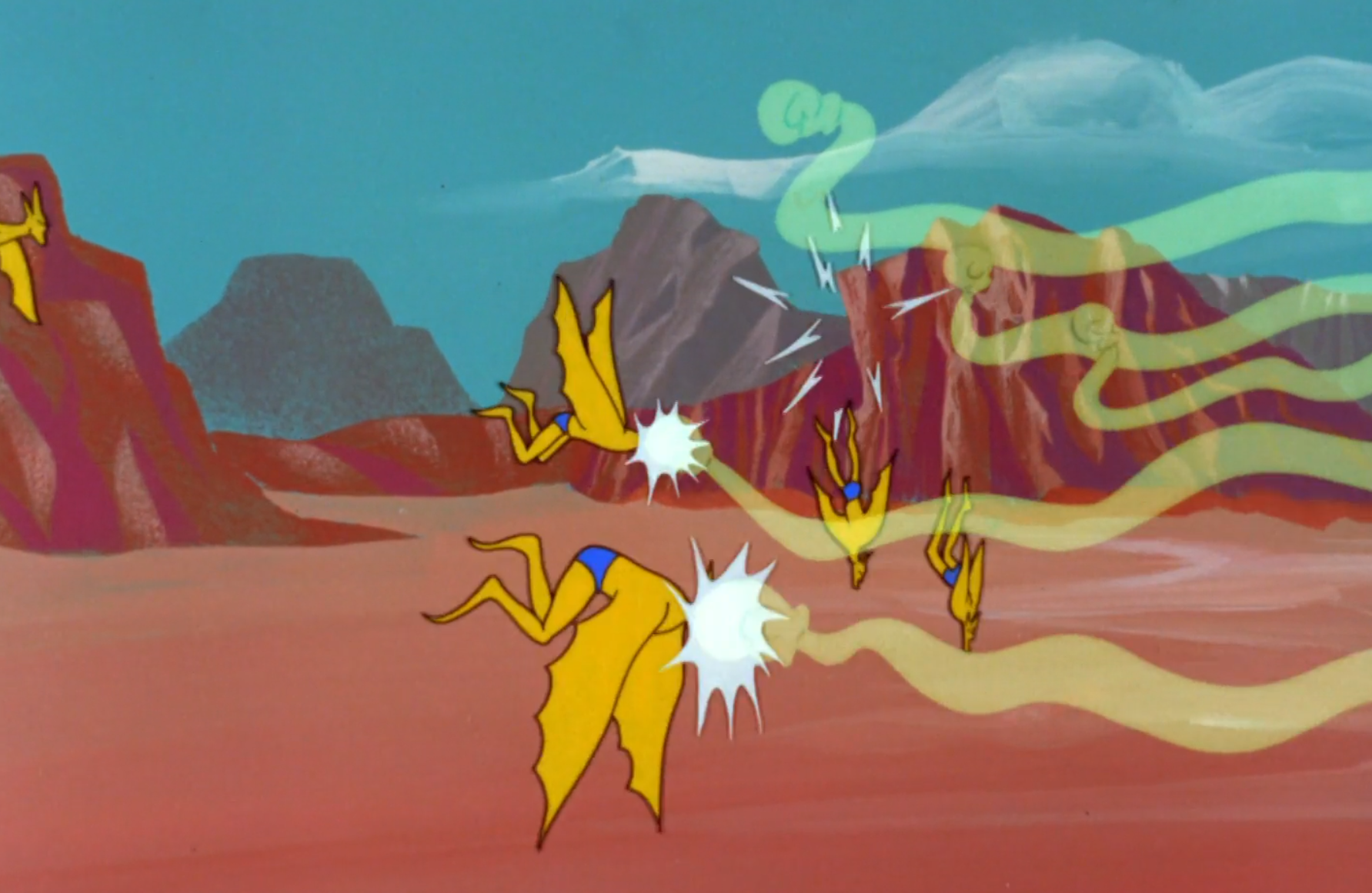 10. The second-best episode is Evil Is as Evil Does, featuring Evil Star in what my World’s Greatest Super Friends Podcast co-host John S. Drew pointed out was a stripped down adaptation of Green Lantern #44. Most of the “super superhero” shorts dealt with oddly designed but generic alien races and monsters, so it’s refreshing to see an actual comics villain make an appearance. (Click here to check out THE FILMATION FILES podcast entry on this episode.) 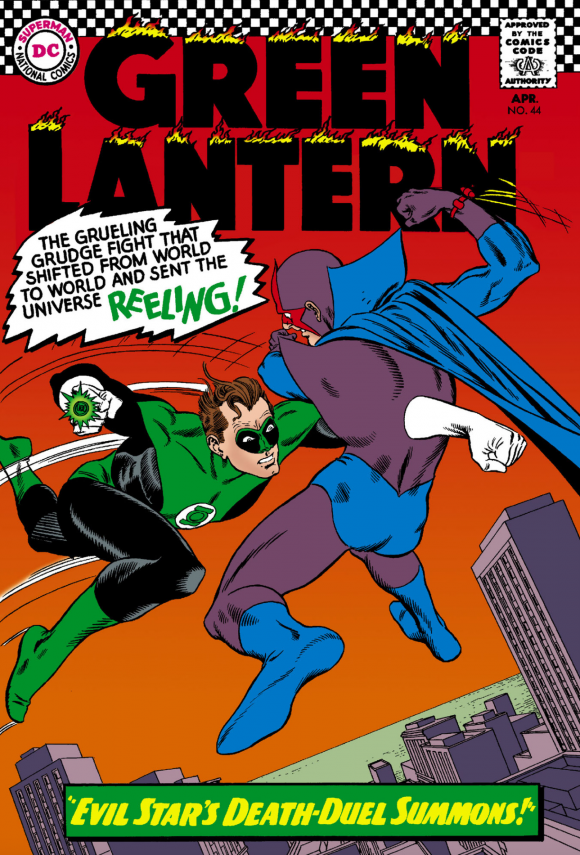 11. Still, wouldn’t Sinestro have been a better choice? Yes, he would have, similar to how the Reverse-Flash would have been better than the Filmation invention Blue Bolt. (Even if I like Evil Star and Blue Bolt just fine.) It’s so difficult to know why certain choices were made back then since most of the people involved are long gone and there’s relatively little documentation of the studio’s decision-making. Producer Lou Scheimer’s autobiography from TwoMorrows is a great resource but it doesn’t always get granular because the book covers such a wide range of programming. 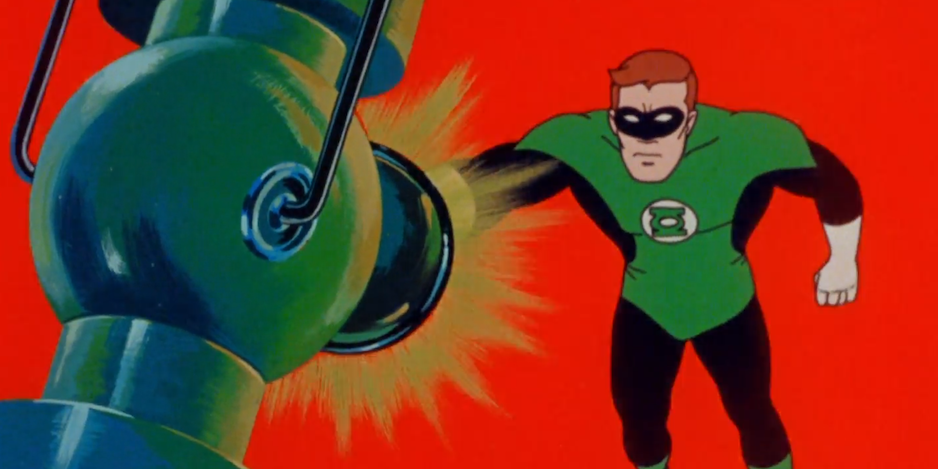 12. The Vanishing World is the least memorable of the three GL segments. It’s got a stock storyline involving space thugs kidnapping Kairo and less of the unintentional campiness that makes the Filmation cartoons so great. 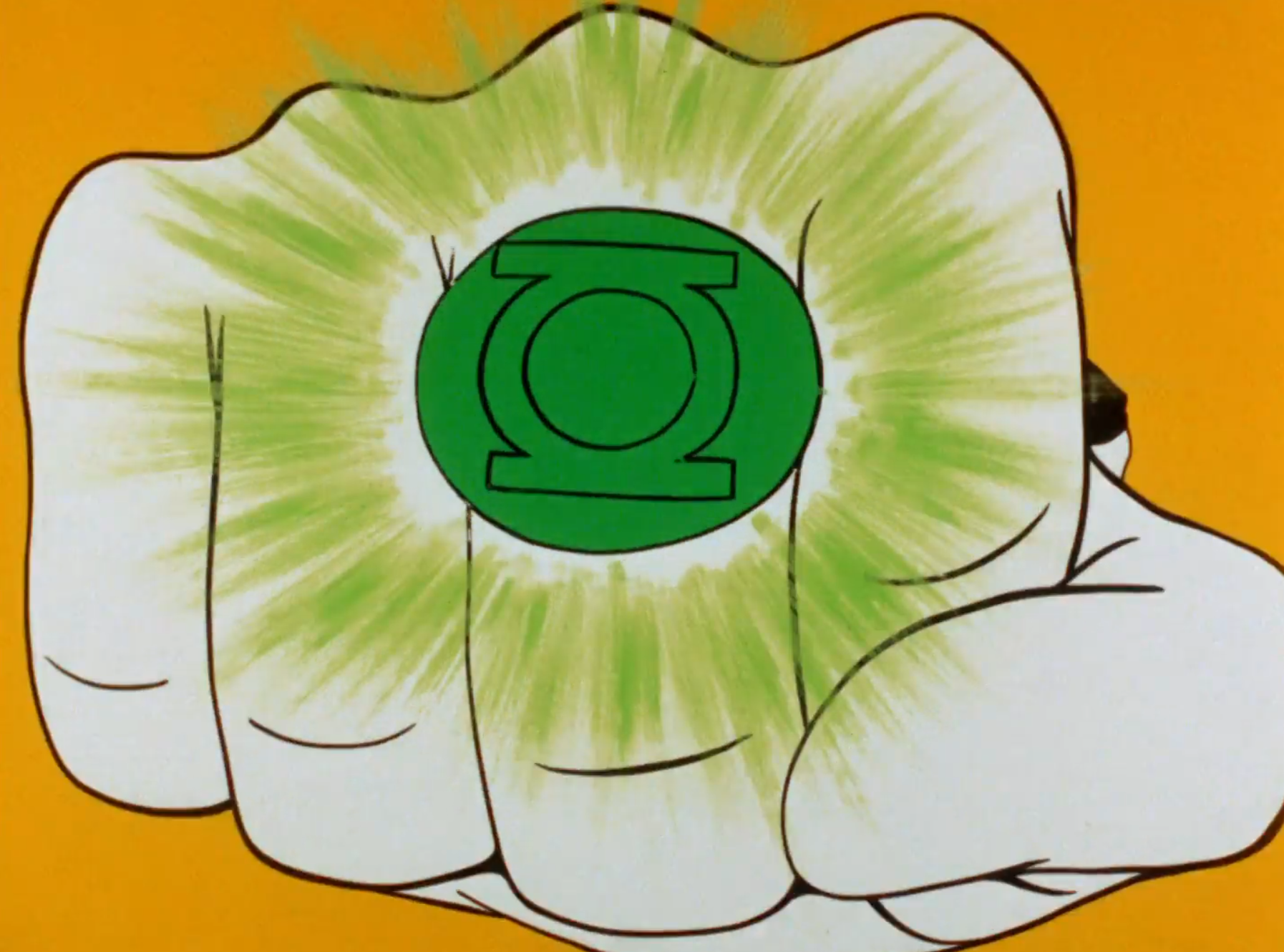 13. Ever notice how the Green Lantern of the future in Batman Beyond is named Kai-Ro? 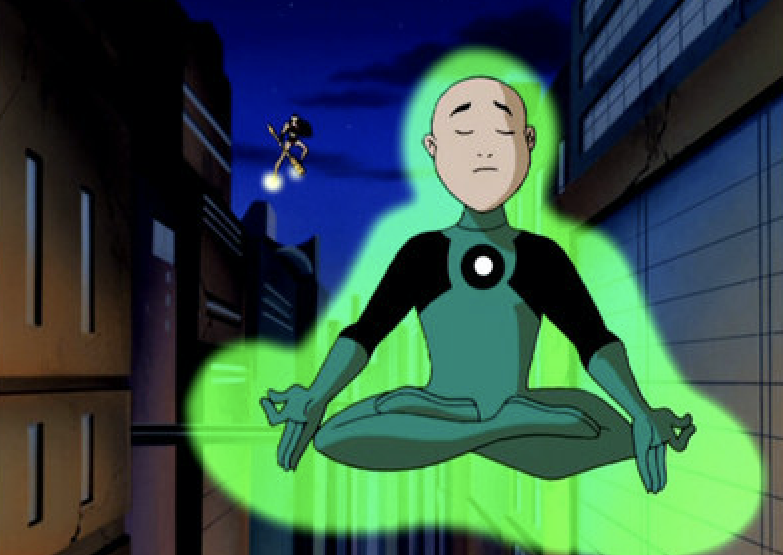