PLUS! Co-creator J.J. Sedelmaier underscores once and for all whether Ace and Gary are friends … or more than friends!

The Ambiguously Gay Duo cartoons that used to run on Saturday Night Live were laugh-out-loud funny when they first ran and they are just as funny now.

But now you can get yourself a little piece of Ace and Gary — who, by the way, were voiced by Stephen Colbert and Steve Carell, respectively — as a set of action figures or, even better a computer-monitor bobble:

I asked animator J.J. Sedelmaier, a friend of friends and regular around the ol’ 13th D, all about it in this MIGHTY Q&A: 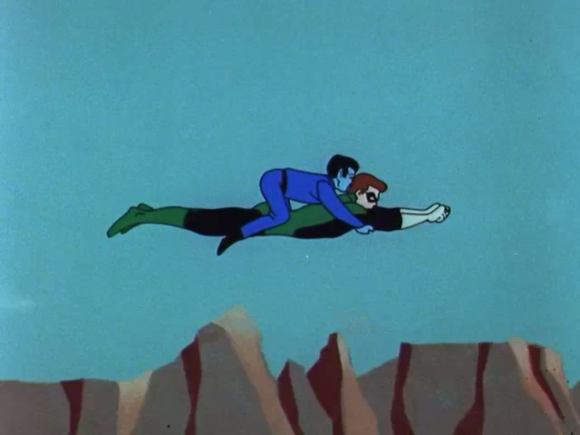 Kairo hitches a ride on GL. 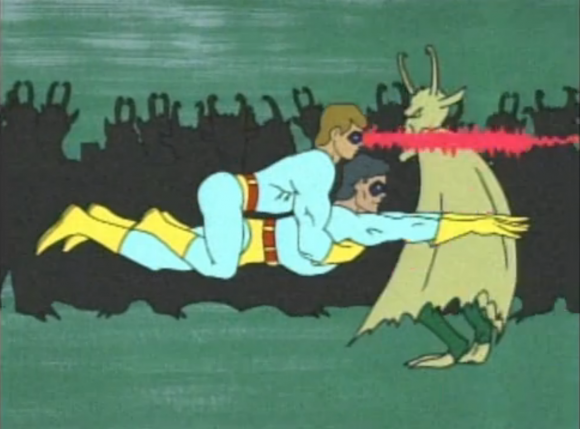 Gary hitches a ride on Ace. H/T The Absorbascon

Dan Greenfield: Some time ago, I asked you to write a tribute to Lou Scheimer’s Filmation because it so clearly influenced satire like “The Ambiguously Gay Duo.” So before we even get into the merch, tell me how the Ambiguously Gay Duo came together. In a manner of speaking.

J.J. Sedelmaier: I had an ongoing working relationship with Robert Smigel that had begun in 1992 with an SNL commercial parody Cluckin’ Chicken. Soon after we did the opening for the then-new, Late Night With Conan O’Brien — Robert was executive producer/head writer.

Later he hopped to the short-lived Dana Carvey Show and that’s when he had the initial idea for the Ace & Gary cartoon. He called (back when people used telephones) and said he had an idea for a kid’s Saturday morning-type cartoon and could/would I take a look at the script.

He sent it over and I never laughed out loud at any script I’d ever read before. Comic-book superheroes have always been a part of my DNA, and this (it was 1996) was a chance to parody them like never before! 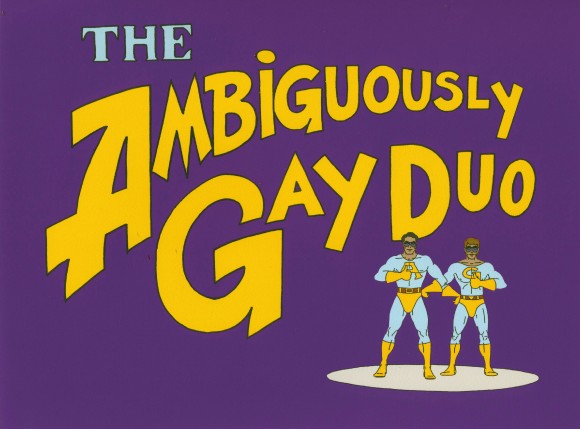 We’d also recently done a retro-technique Speed Racer commercial for VW and were in full retro mode! I designed Ace & Gary but throughout the series, everyone at the studio got a chance to do everything from additional character design and conventionally painted backgrounds.

We did the first episode (It Takes Two to Tango) using cel animation — acetate cels, paint, film — the whole megillah! All the subsequent episodes (there have been 11) were produced using digital ink and paint. 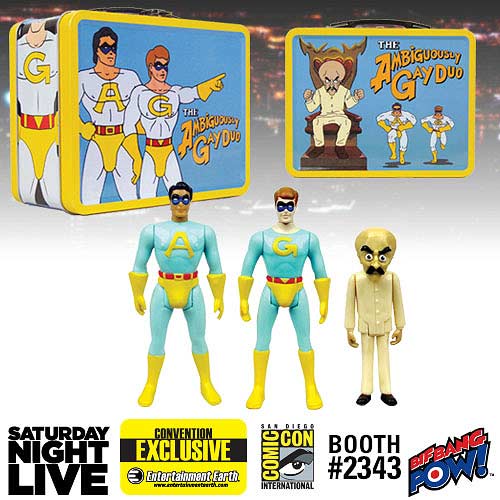 Stock art. You can order thru Entertainment Earth.

OK, so years later, there’s Ambiguously Gay Duo swag. How did this happen?

I think the folks at Entertainment Earth/Bif Bang Pow! approached Broadway Video (Lorne Michaels’ company who owns the rights to most all Saturday Night Live properties) with the idea of action figures and a monitor bobble using the likenesses of Ace & Gary.

Robert Smigel has been terrific in folding me into projects that involve the AGD to keep design and characterization consistent. I worked closely with both firms and we had a lot of back and forth to make sure everything was true and “on model.”

Then, EE/BBP wanted to arrange a signing at this year’s San Diego Comic-Con and was nice enough to bring Robert and me together for the epic event! He brought Triumph, the Insult Comic Dog along and it was truly a unique romp of an experience. 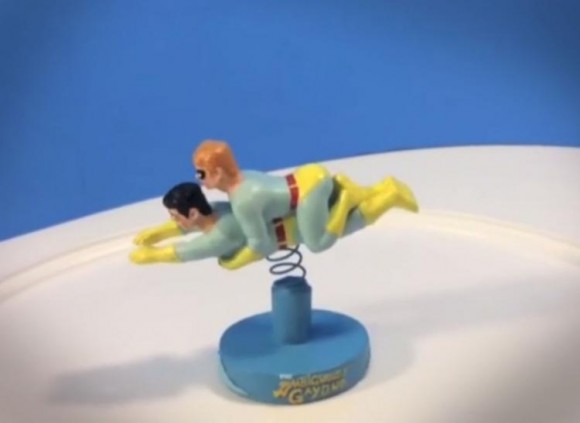 You can order thru Entertainment Earth.

Tell me about your involvement and how you helped Bif Bang Pow! get it just right.

It was simply a matter of noodling the details until they were spot-on. I’m so close to the characters that I’m in a much better position to catch the minutiae that ultimately determines the difference between getting it right and producing a “wannabe” item.

Everything from costume colors to crotch and trunk exaggeration was adjusted to perfection. They were very collaborative and I’m quite happy with the result — both with the toys AND the packaging (so to speak …). 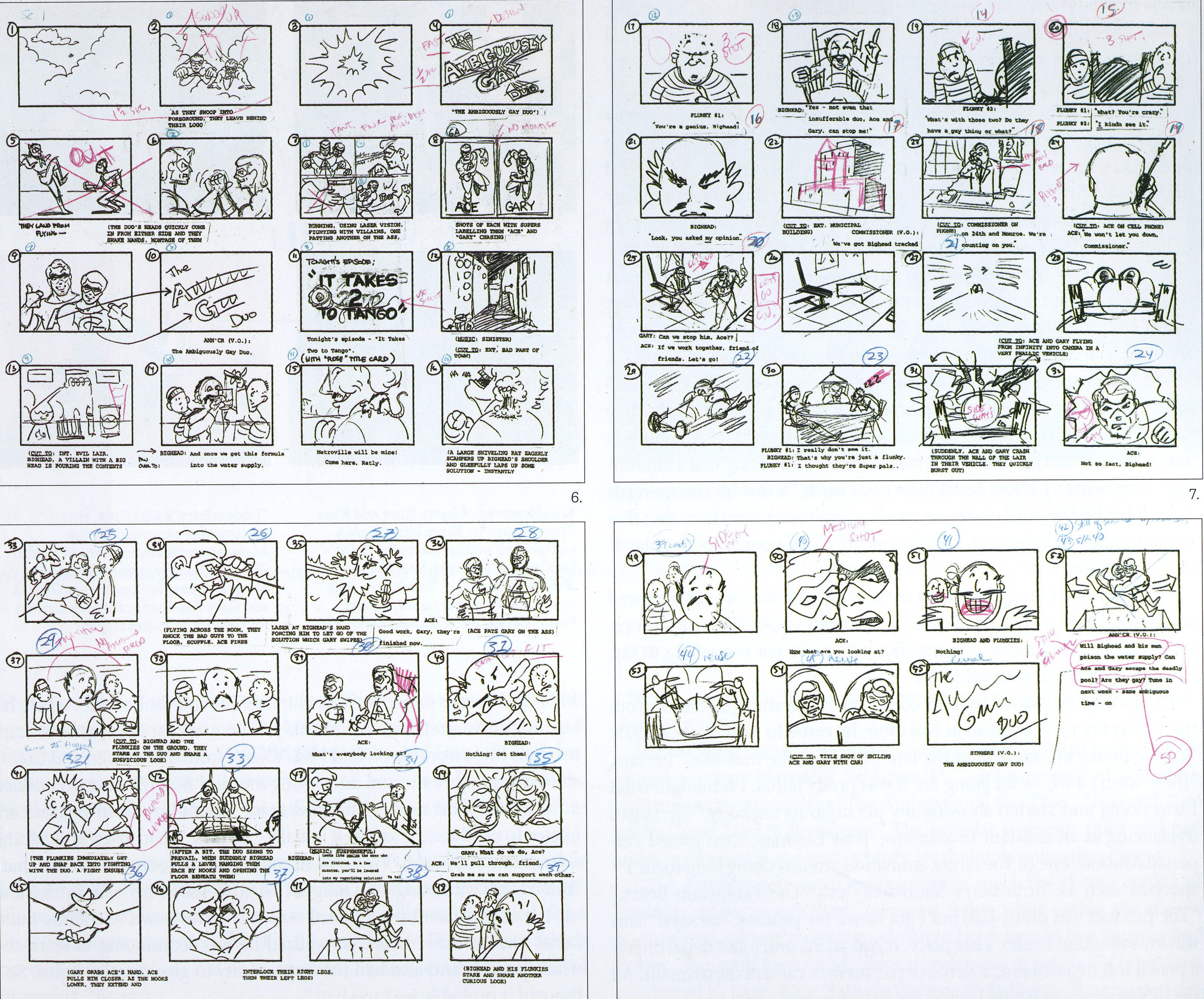 The rough storyboard Sedelmaier did for the first AGD cartoon, “It Takes Two To Tango”

Did you ever imagine this would ever happen?

I’m actually surprised it’s taken so long! I’ve championed the series’ existence since we started because we’ve never been involved with anything (except perhaps MTV’s Beavis and Butt-Head) that’s locked into the public’s enthusiasm like AGD! 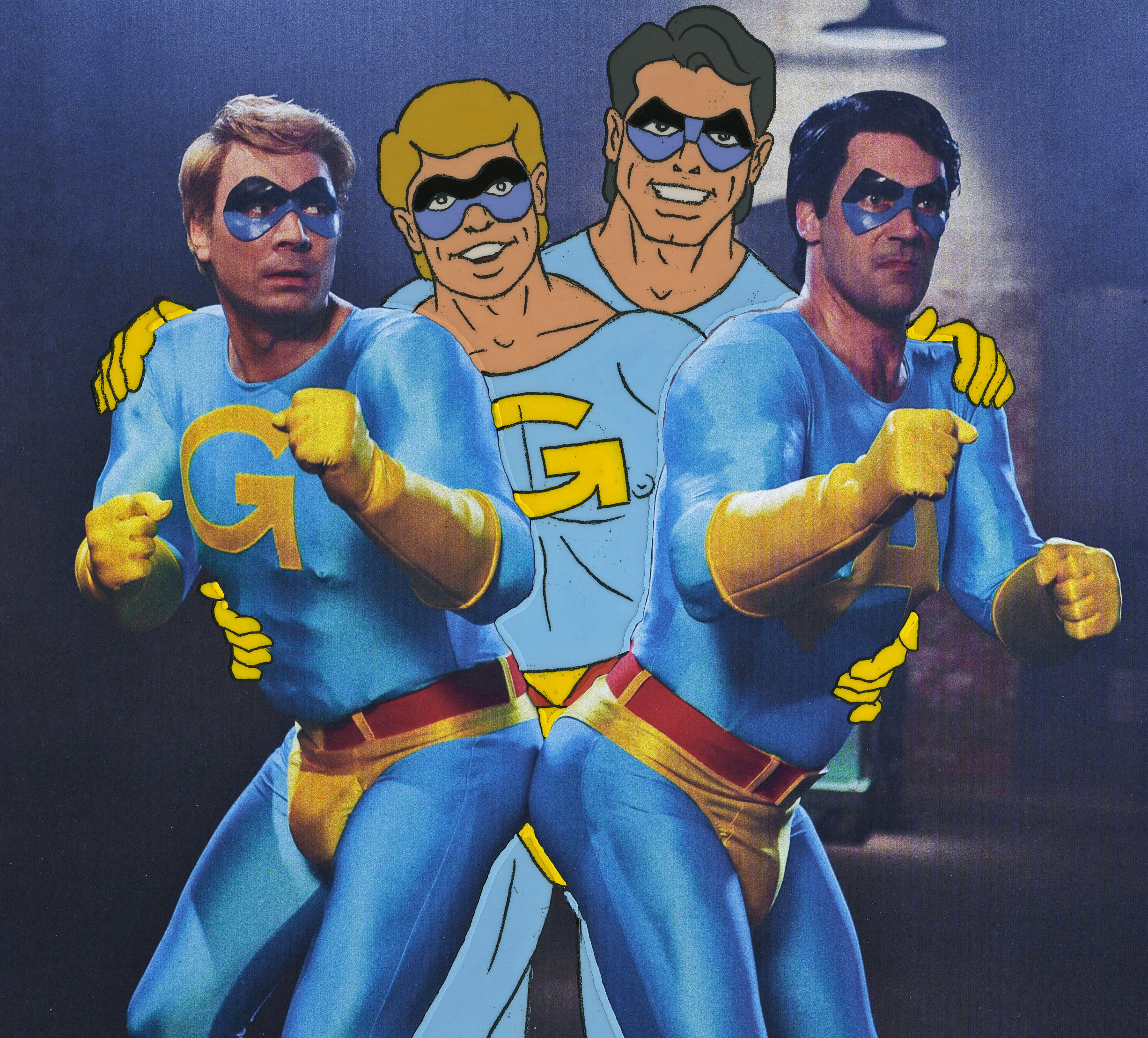 Whose idea was the monitor bobble? Because that’s genius.

Thank EE/BBP! for that concept. They specialize in all sorts of merchandise based on pop culture icons, etc., and appear to have endless applications for each licensed property. 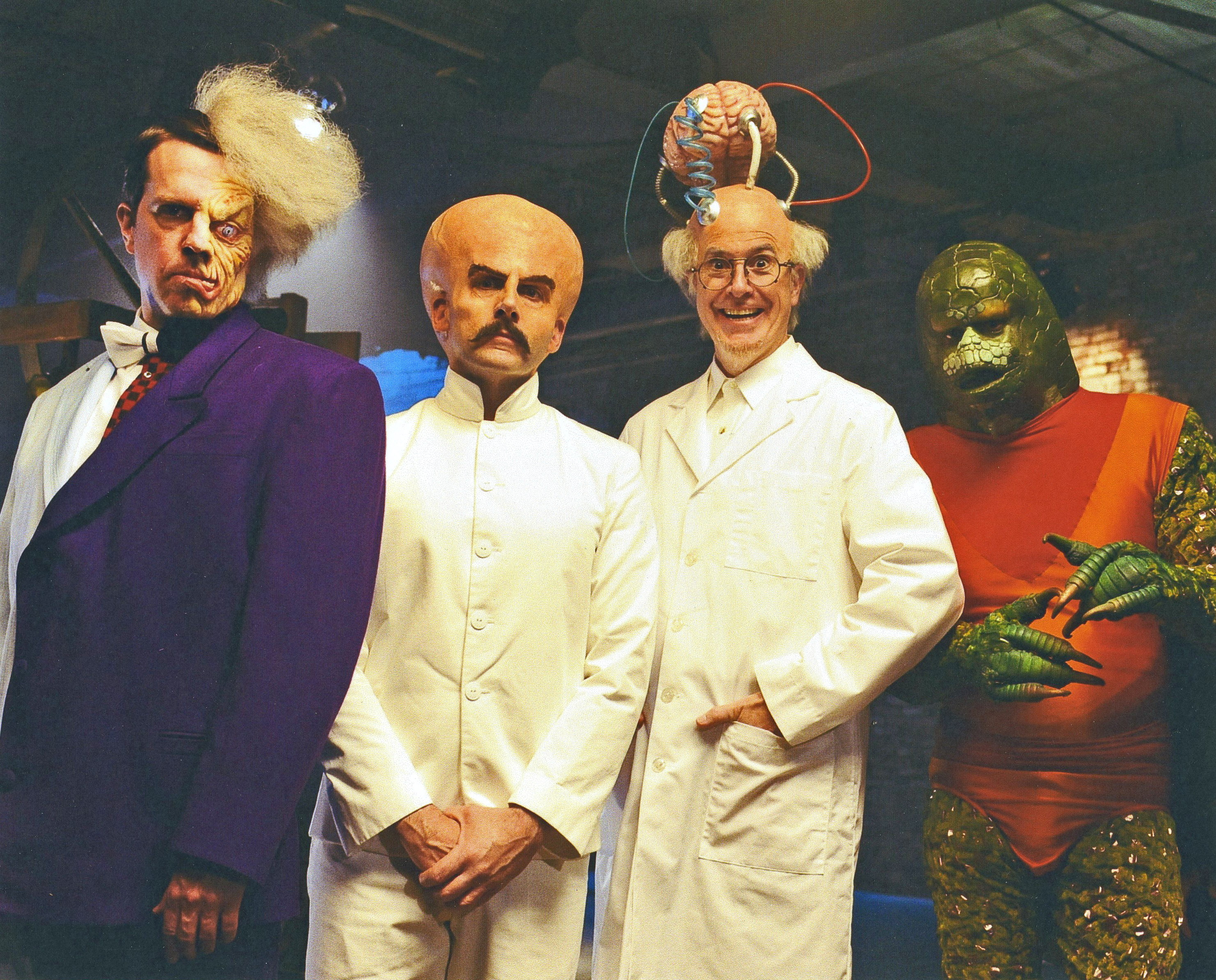 Y’know, it’s the 21st century. Isn’t it time to clear up once and for all whether Ace and Gary are gay? Don’t you want them to get married? Don’t these guys deserve a happy ending? In a manner of speaking.

Duh — that’s easy… And Robert and I have both been vocal from the beginning about this: They’re so NOT gay. From the get-go it’s always been about the phobia others have… That’s the crux of the humor! 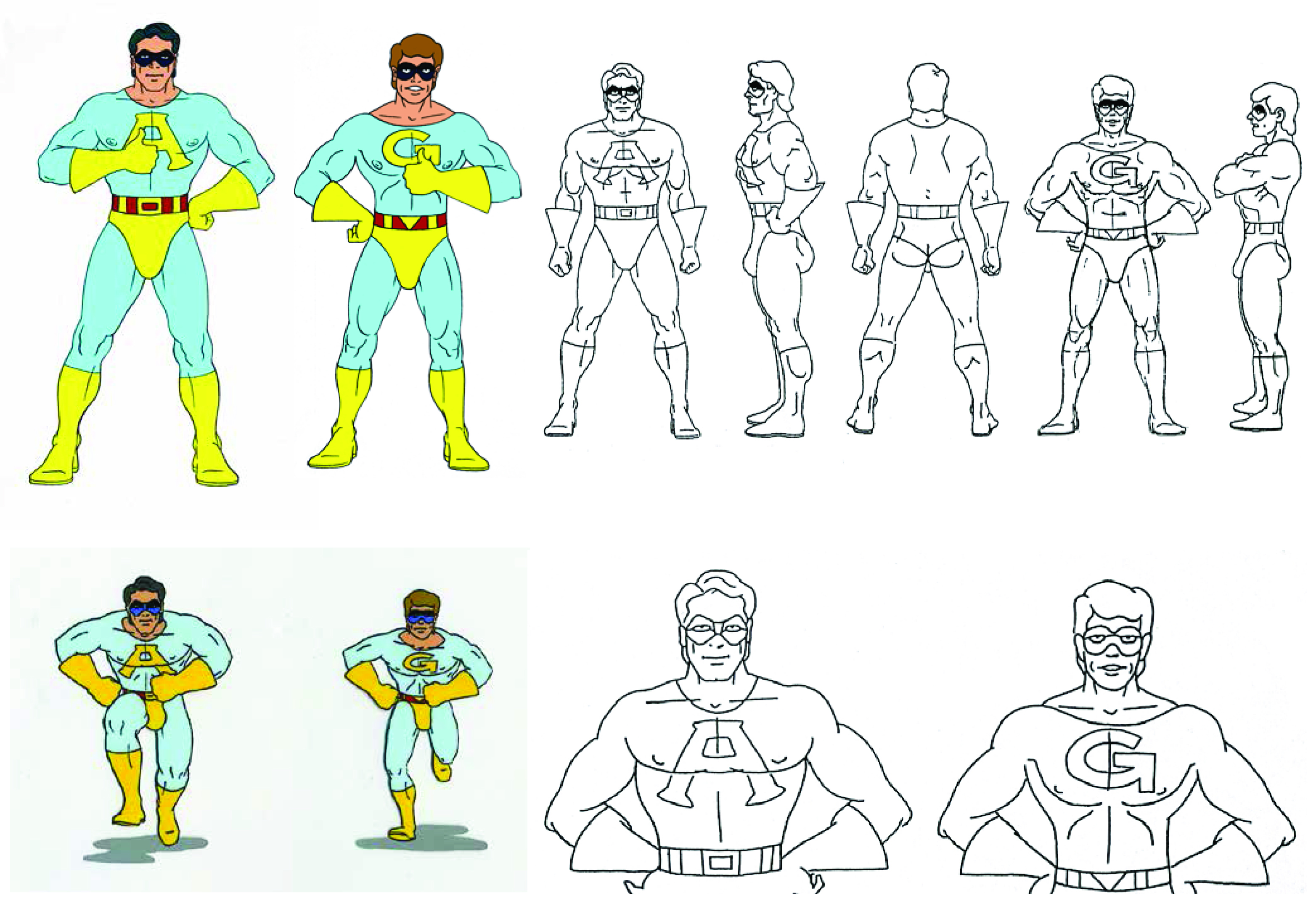 Full set of Sedelmaier’s AGD models used for production of the cartoons and reference for BBP/Entertainment Earth for help in creating the toys. 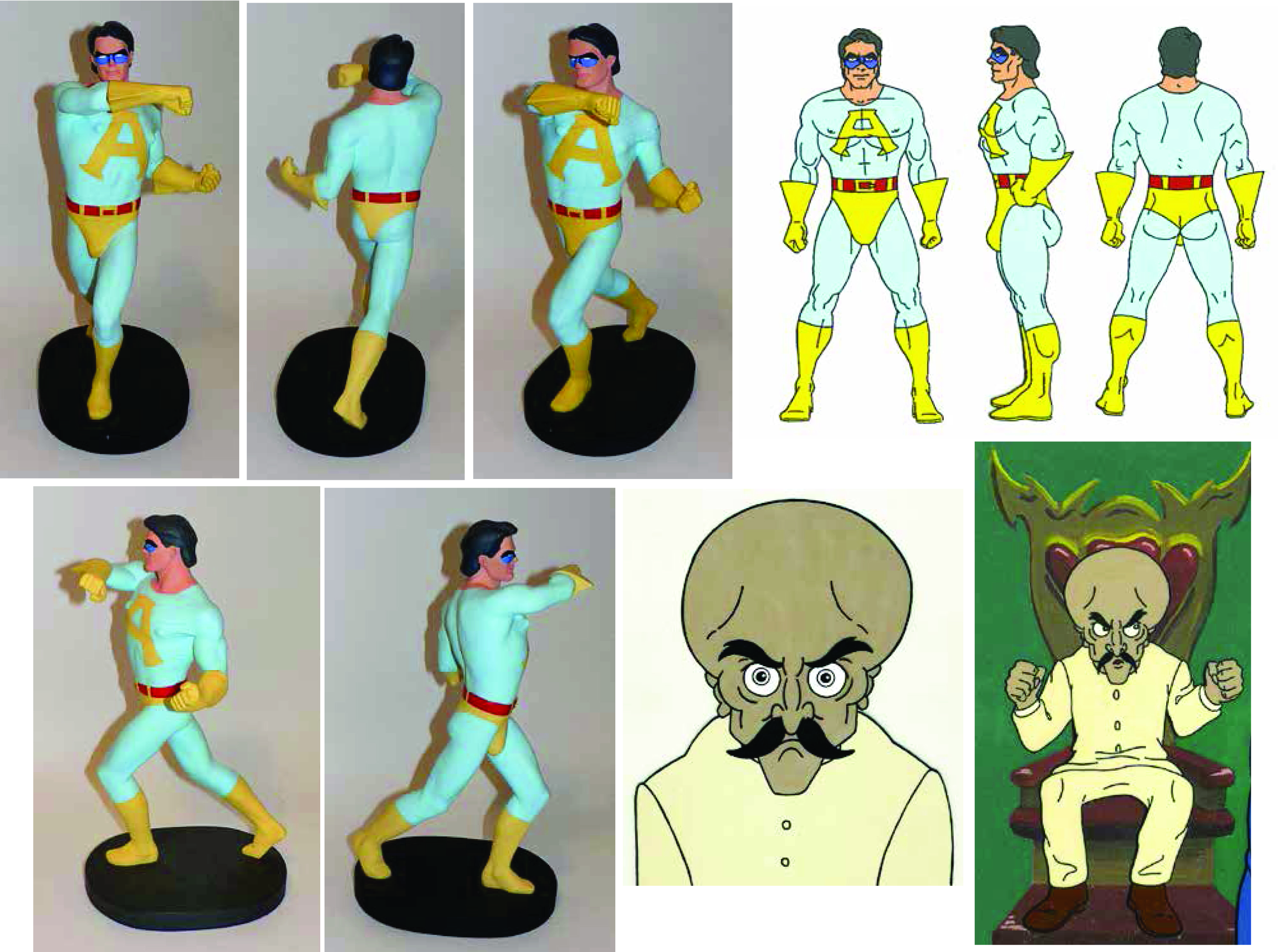 Actual 3D maquette Sedelmaier built of Ace as well as color reference for Bighead and Ace. 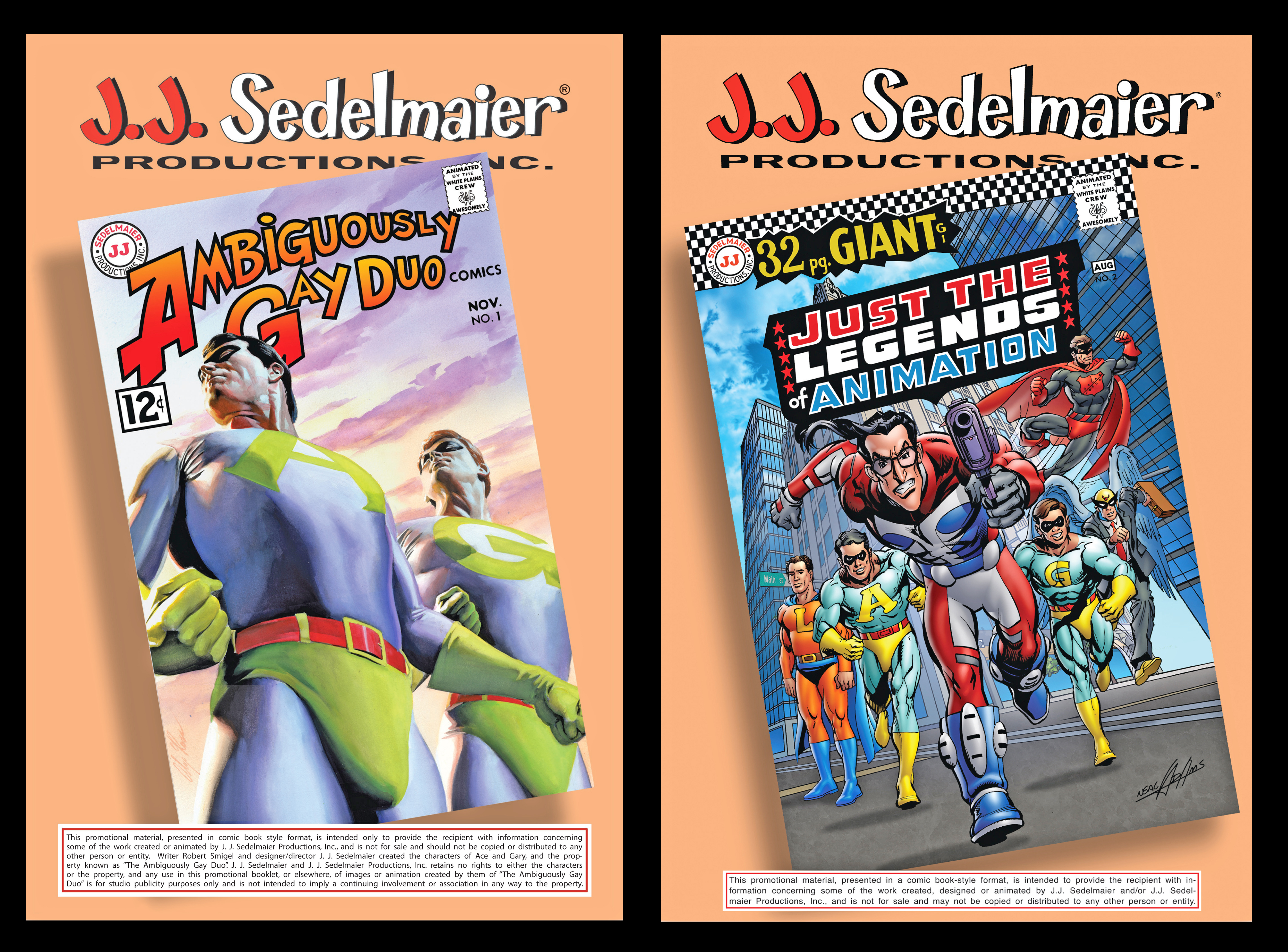 Issues #1 and #2 JJSP comics. Cover on left by Alex Ross, right by Neal Adams. Sedelmaier commissioned them both to illustrate Ace & Gary as well as his studio’s full array of comicbook-type superheroes!