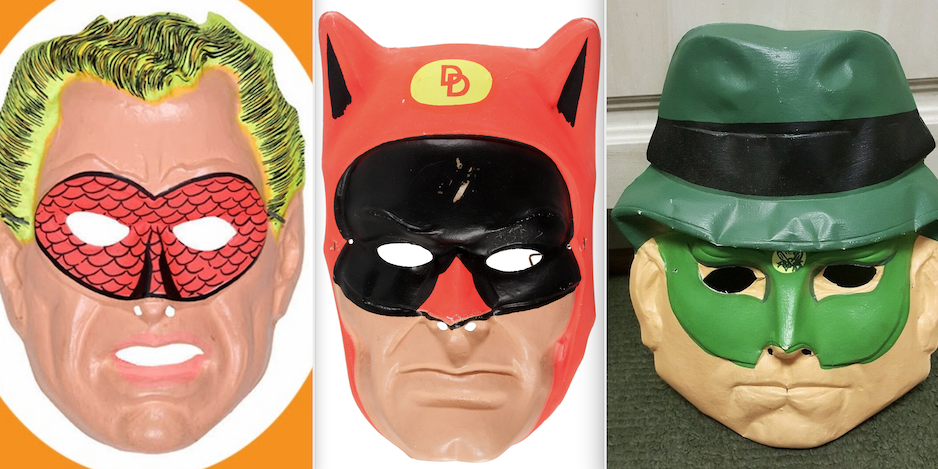 UPDATED 10/25/21: Halloween’s this weekend! Perfect time to re-present this piece from 2020! And if you want to see the TOP 13 Frank Romano BEN COOPER COSTUME DESIGNS — RANKED, click here. Groovy. — Dan

OK, OK. You might say I have something of a Ben Cooper obsession during Halloween season. I cop to it, no question. It’s just that the schlocky symbol of midcentury trick-or-treating loomed large during my childhood so it’s stayed with me ever since.

I mean, just the other day, I ran an ode to Ben Cooper’s Spider-Man costume (click here) while in the past I’ve written about the company’s Batman outfit (click here). And just last year, I posted an extremely popular story: 13 GROOVY BEN COOPER DESIGNS THAT WOULD MAKE GREAT T-SHIRTS (click here). Not only that, Karl Heitmueller Jr.’s WHAT IF 13 SUPERHEROES WORE BEN COOPER COSTUMES INSTEAD? is becoming an annual favorite. (Click here.) 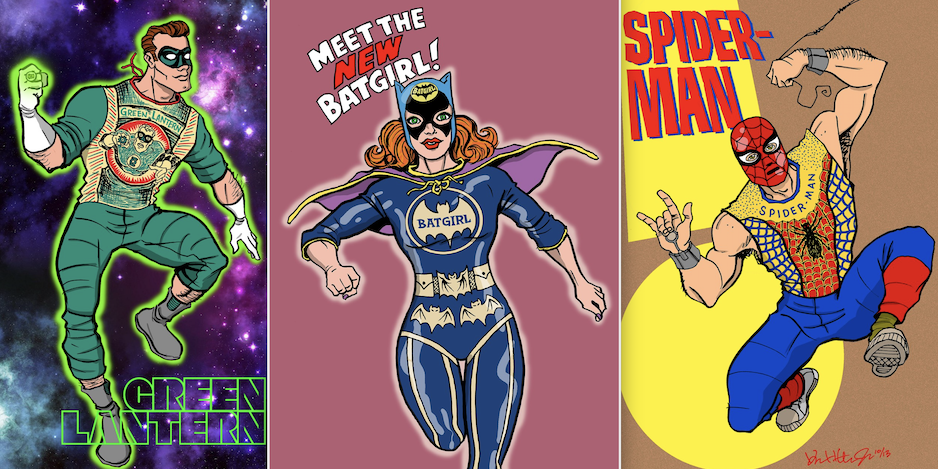 Anyway, Halloween is just days away, so this year we’ve got another new one for you — 13 GROOVY BEN COOPER MASKS — RANKED.

Now are these the 13 best ever? No. In fact, I’ve intentionally left out some great ones in favor of some more obscure ones. (Actually, what the world needs is a comprehensive Ben Cooper online database of costumes and images. Get on that, somebody!)

Also, I use “Ben Cooper” as a term of art. Some of these might be competitor Collegeville, but you get the gist, right? Right.

So let’s have at it. Here are 13 GROOVY BEN COOPER MASKS — RANKED:

13. Snakeface. That’s actually not its real name. I’m not sure what is. Hell, I’m not even sure WHAT it is. I just know that I cannot look away. 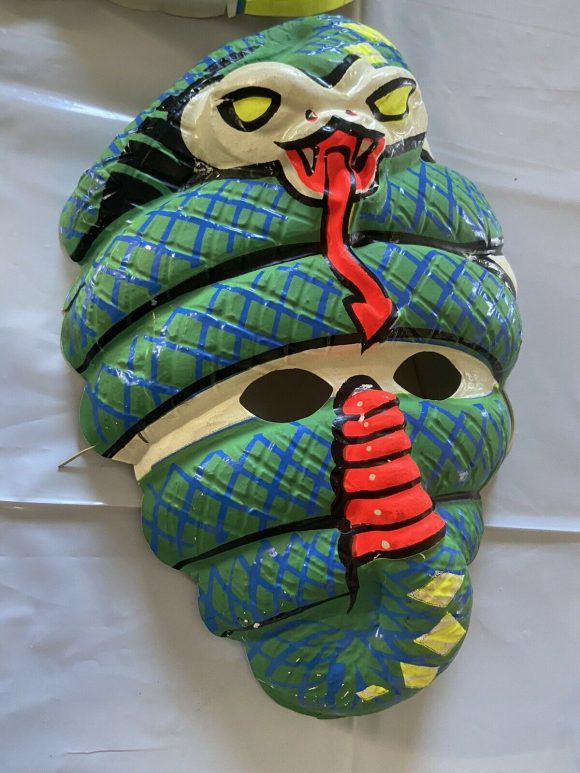 12. The Flying Nun. Besides the fact that Sally Field is a brunette, I really can’t imagine too many kids really wanted to be Sister Bertrille for Halloween. 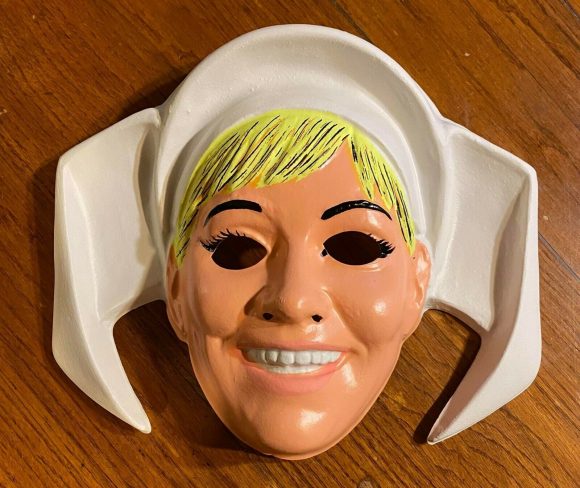 11. Terrified NASA Astronaut. There were a number of different NASA astronaut costumes, usually depicted as bold adventurers. In the ’60s and early ’70s, astronauts were seen as the bravest people (off) Earth. I just love that somebody had the notion that, really, space travel is terrifying — and tried to sell the idea to kids. 10. Lisa (Conquest of the Planet of the Apes). I still can’t get over that of all the characters in the POTA franchise, they made a Lisa costume. Sure, she gets Conquest’s money quote but still. I do like that they glammed her up with bright grandma lipstick, though. 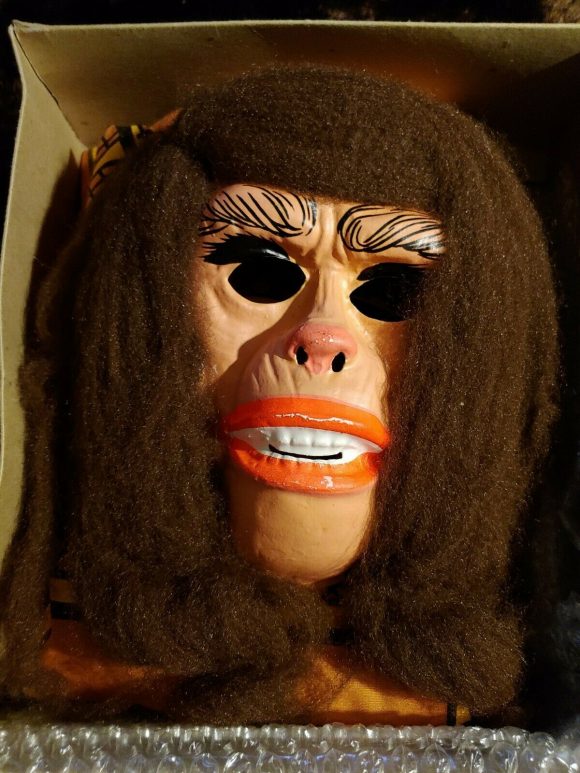 9. The Metaluna Mutant. There’s actually one out there with a pink color scheme, which seems somehow more fitting. Still, this one’s pretty rad. 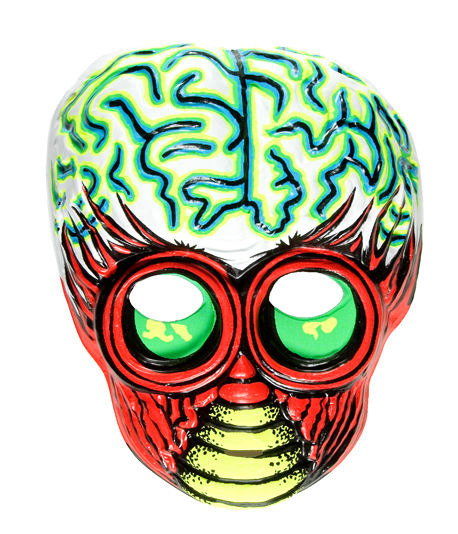 8. Birdman. This is a decent likeness of the Hanna-Barbera superhero, except for the name emblazoned on the top. And those bird wings around the eyes weren’t bird wings at all — just a black design element. But I dig it nonetheless. (Sorry, it’s so smushed. It was the best pic I could find.) 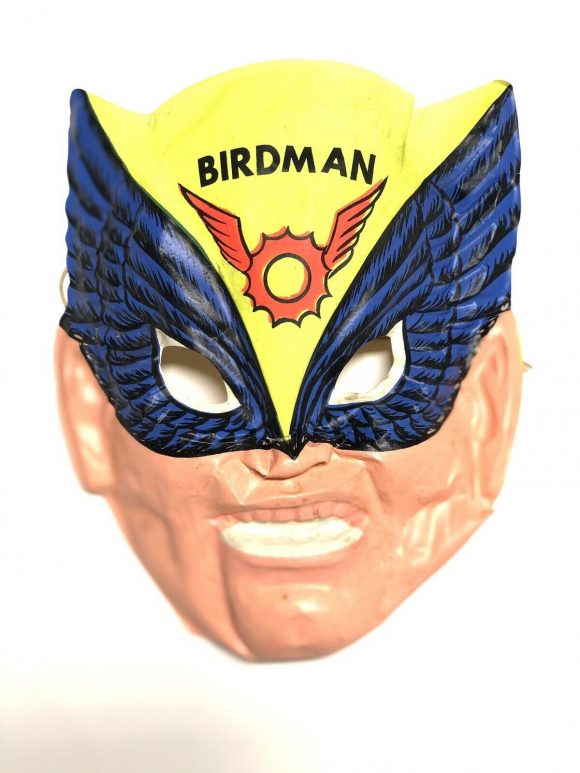 7. Iron Man. So close and yet so far. Forget the nose. It’s the blue rivets and “IRON MAN” up top that make it. 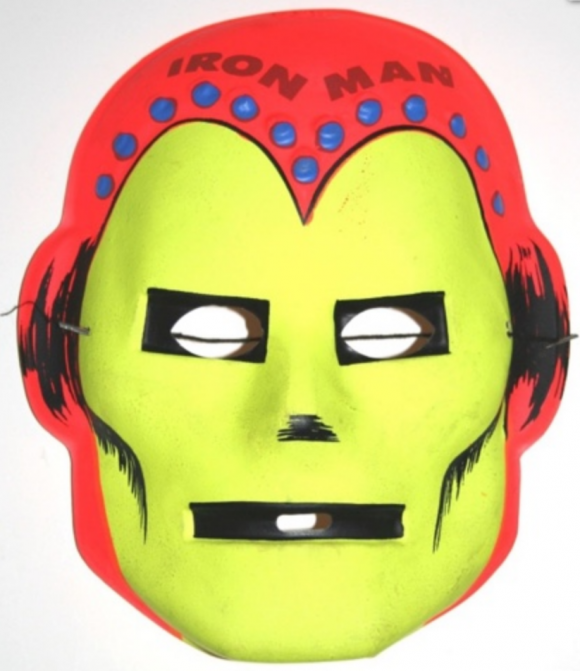 6. Jaws. It’s the mid-’70s and you’re desperate to cash in on the tidal wave of Jaws hype. How do you create a cheap mask that looks like a shark? Simple: Use the iconic movie poster image, punch a couple of eyeholes in it, attach an elastic band and call it a day. Then watch the cash pour in like the bloody Amity surf. 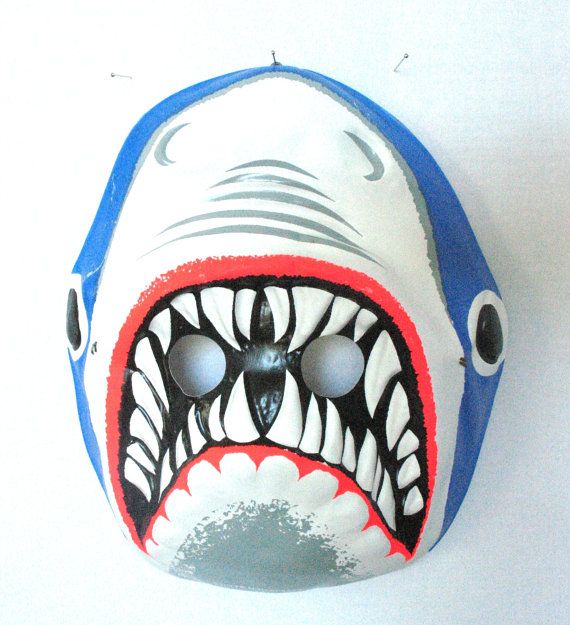 5. Green Hornet. This is one of the best Ben Cooper masks ever. It’s actually just a straight-up replica of Van Williams’ TV crimebuster. No added words, no weird decorations. Big props to Ben Cooper for its restraint. So why isn’t this No. 1? Well, who said we wanted restraint? (Again, sorry the mask is all damaged.) 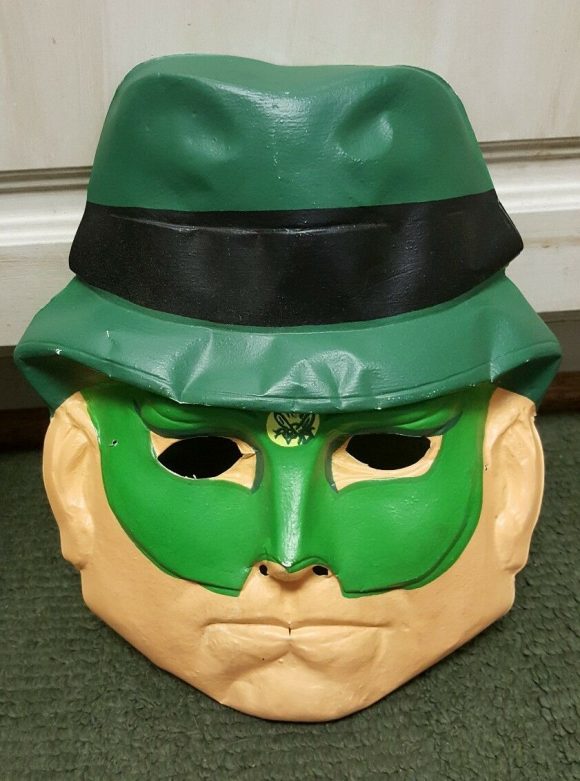 4. Aquaman. I always thought it strange that Ben Cooper’s Superman costume came with either a domino mask or a plastic face covering, complete with spit curl. Superman has no mask, obviously, and as a kid, I was perfectly happy not wearing one. Aquaman, on the other hand, got the double treatment — a face covering with an orange, scaled domino mask. (It appears to be a repaint of the Green Lantern mask.) Ben Cooper’s slogan should have been “Proudly Off-Model Since 1937.” 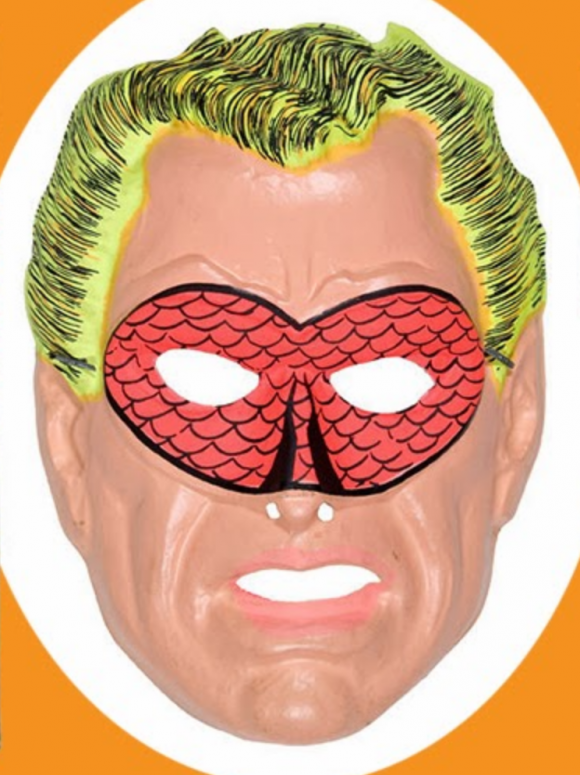 3. Alien. Like Jaws, the Xenomorph had to be tough to re-create Ben Cooper-style. All those teeth! All that head! ALL THAT SLIME! But this is about as good an attempt as you were likely to get — and unlike Jaws, this mask is damn creepy and scary. Success! 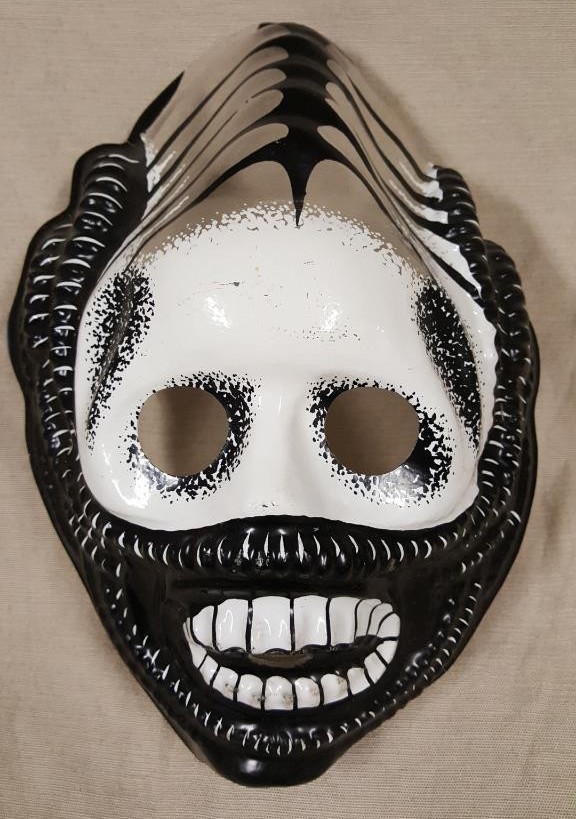 2. Daredevil. The ultimate repaint: It’s Red Batman! Complete with yellow oval on the forehead! (DD standing in for a black bat, natch.) No wonder it took Frank Miller for people to start really taking Hornhead seriously. 1. Village People. The disco novelty act was so popular that there were different characters produced. But the fact that Glenn Hughes’ Leatherman was one of them makes this perhaps the most wonderfully subversive mask in cheap Halloween costume history. You’ve gotta be a macho man? Let it fly, kid! 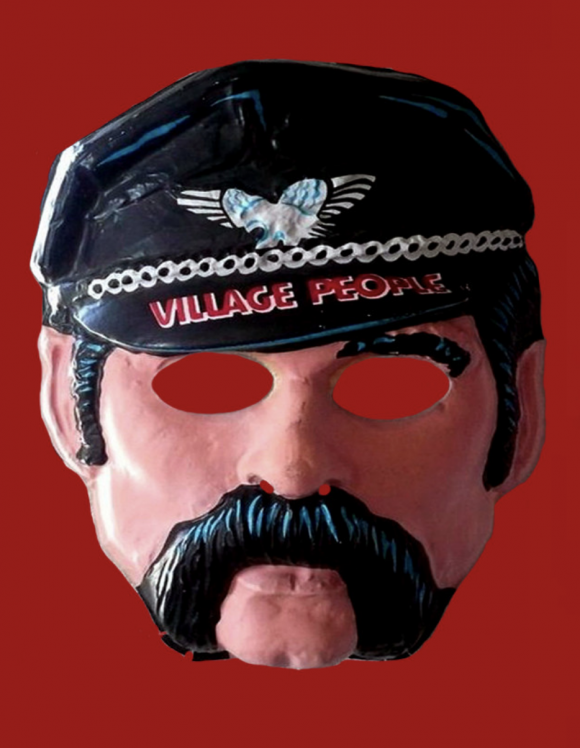