A BIRTHDAY SALUTE: Our resident Marvel expert, Jim Beard, pays homage to the late creator, who was born 78 years ago… 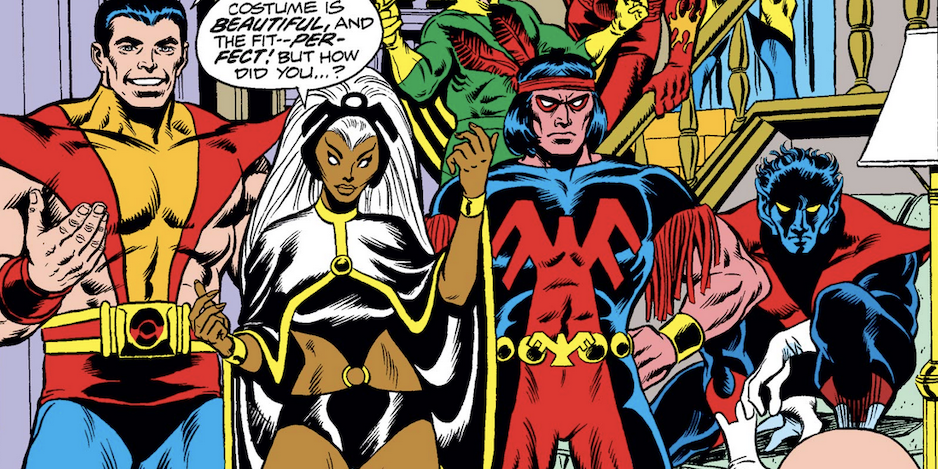 The late, great Dave Cockrum was an all-around comics creator, being both an artist and writer, but when I think back on his legacy in the industry, my mind’s eye goes zooming to his character designs. To that end, I’ve cobbled together 13 FABULOUS DAVE COCKRUM MARVEL CHARACTER DESIGNS to celebrate the man’s birthday. (He was born Nov. 11, 1943.)

NOTE: You may be saying, “Oh, same-old, same-old, we all know Dave was a fantastic designer,” but just to shake things up a bit, I’ve seeded this list with some off-the-beaten-path favorites of mine… and you won’t know what they are unless you take a leap of faith with me, True Believer!

In no specific order…

Phoenix. Let’s start with greatness, shall we? Dave’s costume for the transformed Jean Grey in X-Men #101 is a stunner, plain and simple. It has his requisite sash, sure, but I love that black wedge-shape with the abstract avian symbol, and the colors combined with Jean’s red hair make for a splash in X-Men history that will never be forgotten. 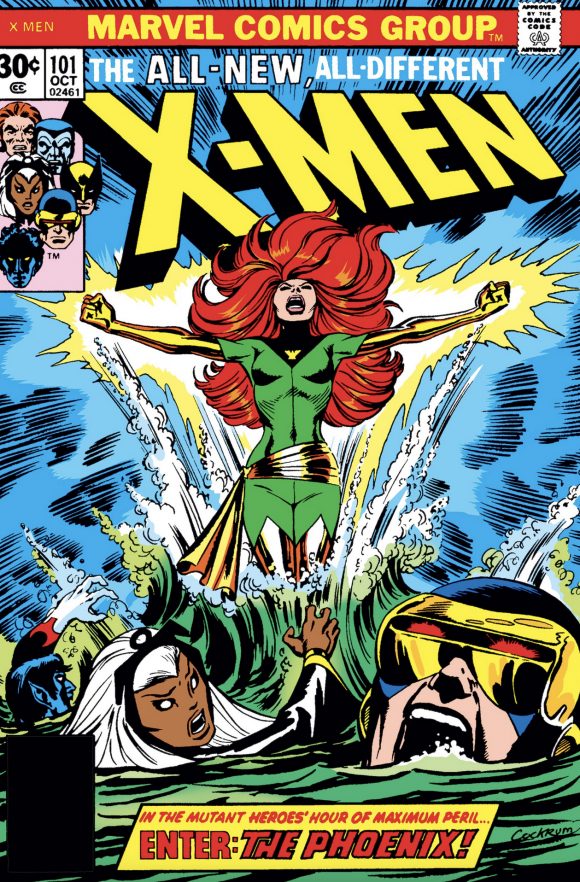 Smasher. Ah-ha! Yes, I’m going places no Cockrum Costumes list has never gone! First appearing in X-Men #107, the dashing dude designated as Smasher made a smashing impact on my eyeballs with that get-up. I really dig the simplicity of the suit, as well as, again, the color combination. Extra points for a cool chest symbol that may or may not have anything to do with “smashing.” 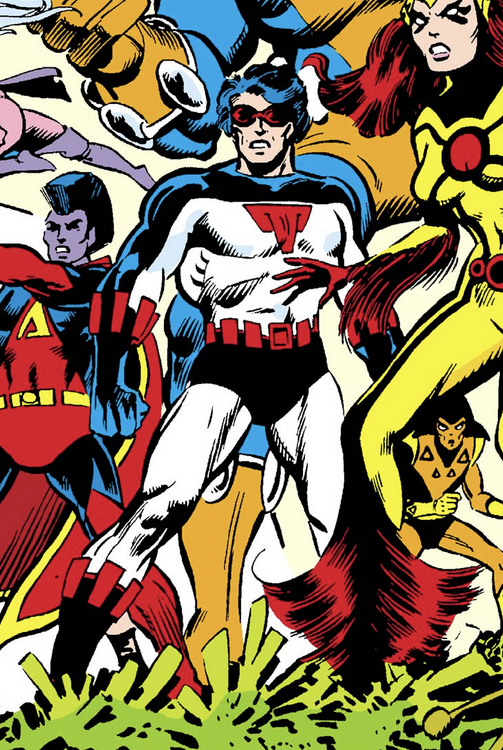 Nightcrawler. Legend has it that Nightcrawler was brought over from DC to Marvel when Dave jumped ships, and in doing so made mutant memories at the House of Ideas. This is one of those times when it’s not just a costume design, but an overall character visual for the win. Kurt Wagner’s Giant-Size X-Men #1 look just screams “swashbuckler” while his physical form screams “demon from Hell.” This has to be one of Cockrum’s best. 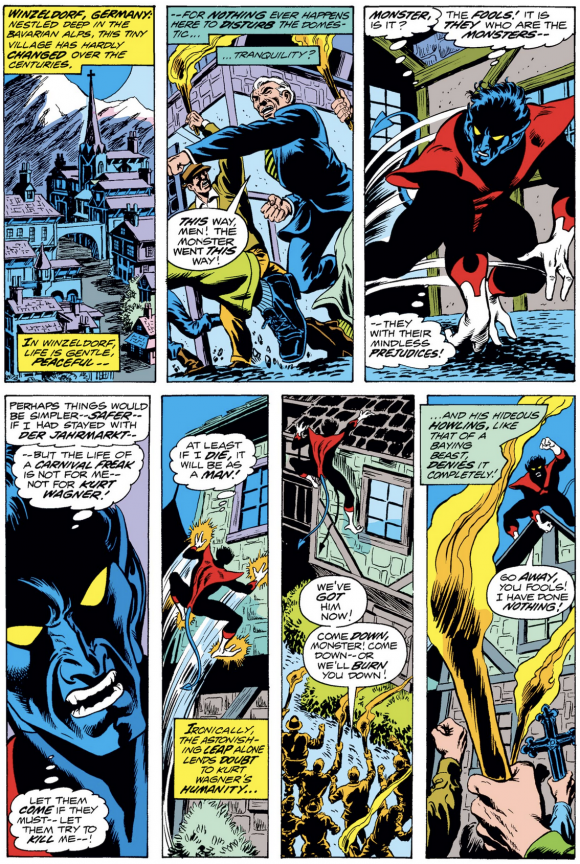 Ch’od. Who doesn’t love the Starjammers, right? X-Men #104 introduced Dave’s space-faring squadron to an unsuspecting readership, and towering above them was this gorgeous guy. A little bit Creature from the Black Lagoon, a little bit Incredible Hulk, and all stuffed into the Thing’s trademarked trunks. Ch’od reminds me a bit of Marvel’s Manphibian—no surprise since they were both designed by Dave. 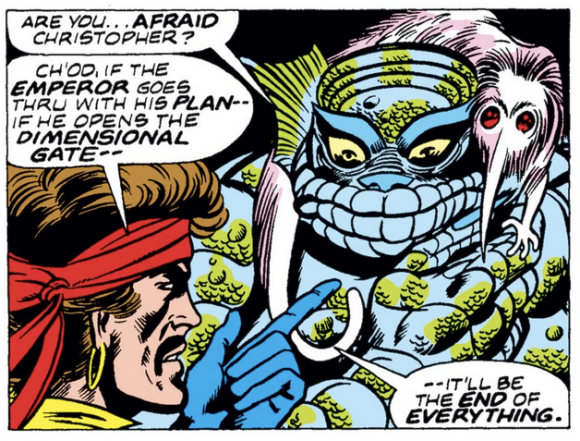 Ms. Marvel. Let’s take a break from the X-Universe and return to the lovely ladies. Where better to go than Dave’s delicious design for Carol Danvers’ second sartorial stunner, as seen in Ms. Marvel #20. It’s got all the Cockrum clichés, sure—sash, high-top boots, etc.—but with color and a whole lotta pizzazz, he brought it together and absolutely boggled the mind of my 13-year-old self when I first saw it on the stands. 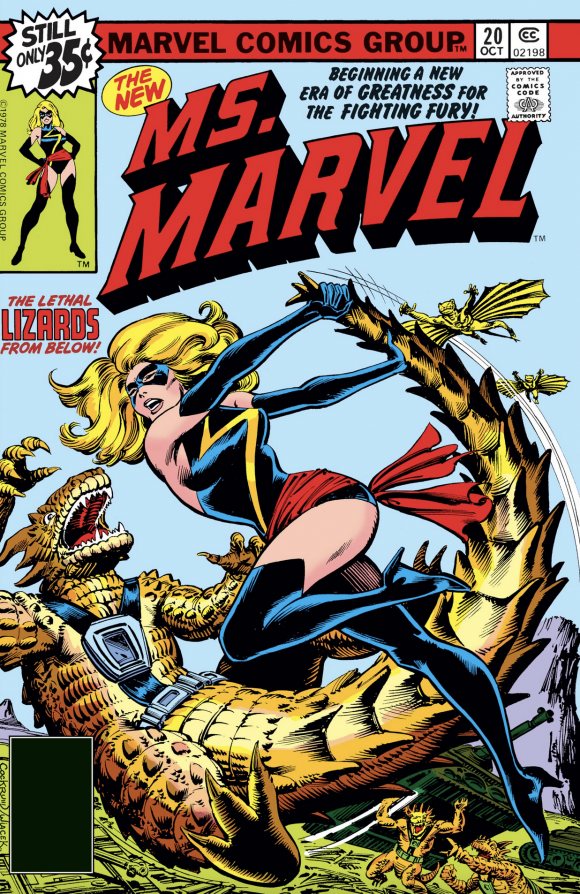 Colossus. This is another example of Dave’s overall character design of combining physical attributes with a uniform. Piotr made his debut in Giant-Size X-Men #1 and what I love about this is not only the banded look of the man-mountain’s armored skin and the “empty” eyes, but the bold Russian red and the detail work on his boot tops and the belt. 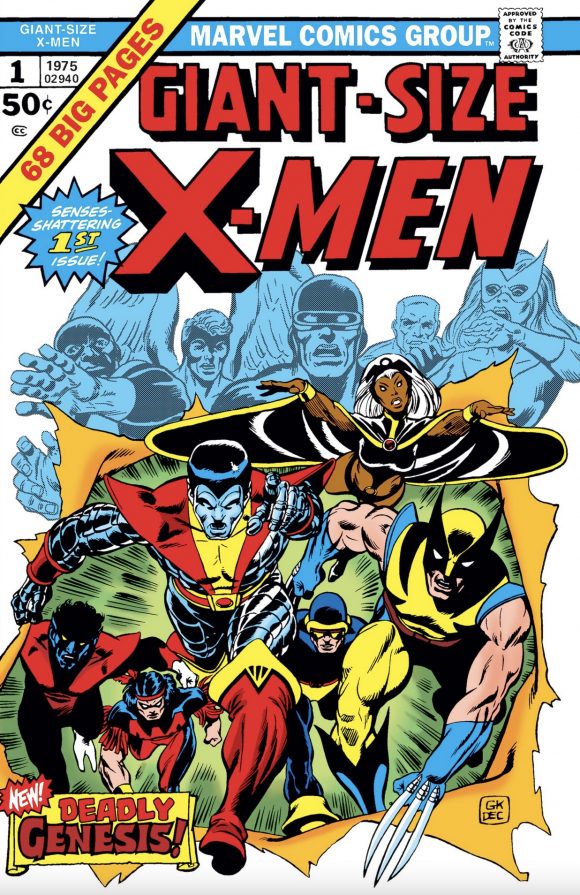 Gladiator. Look past the mighty mohawk you first saw in X-Men #107 and feast your eyes on the glory that is Dave’s design for the leader of the Shi’ar Imperial Guard. The colors! The cape! And another weird chest emblem that only made sense to Dave! The whole ensemble just seethes with power—which is a pretty good thing for a Marvel analogue to DC’s Superboy/Superman. 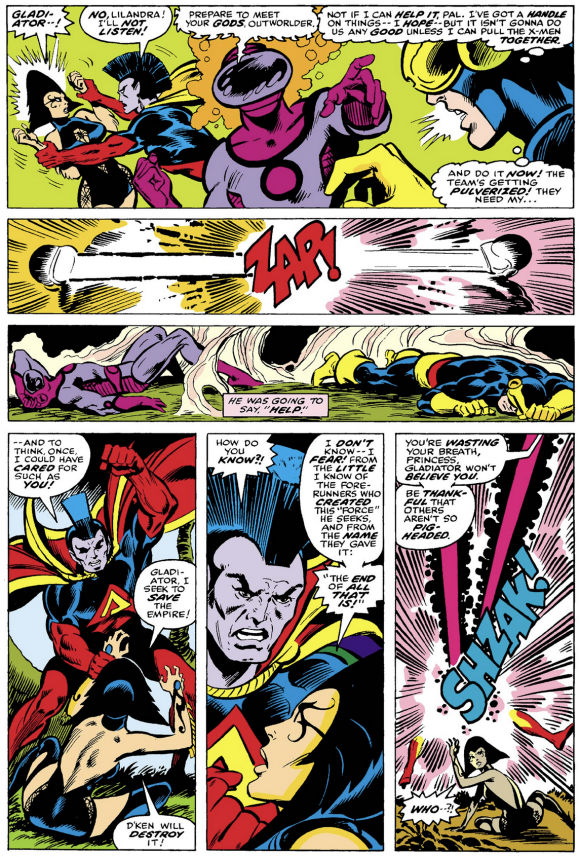 Starbolt. Let’s stay with the Imperial Guard for a moment, shall we? When I pursue the length and breadth of these characters in Cockrum’s illustrations for the Official Handbook of the Marvel Universe, my peepers pop at the cosmic crackle of Starbolt. Look at those wisps of energy coming off his “boots” and “gloves” and “tunic”… and just look at that menacing deep-space face. Just love this guy. 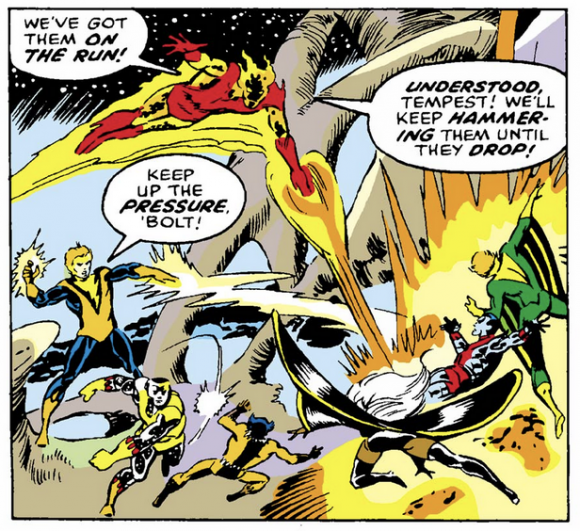 Storm. Would this list really be anything without Ororo? There’s just so much of Dave’s favorite motifs in her design, but I give extra credit for the way her cape flows, being almost a part of her tunic, and that incredible headdress. Let’s not forget Dave’s boot-top touches with those oval cut-outs, and the white hair and white eyes… kind of chilling in a way, eh? 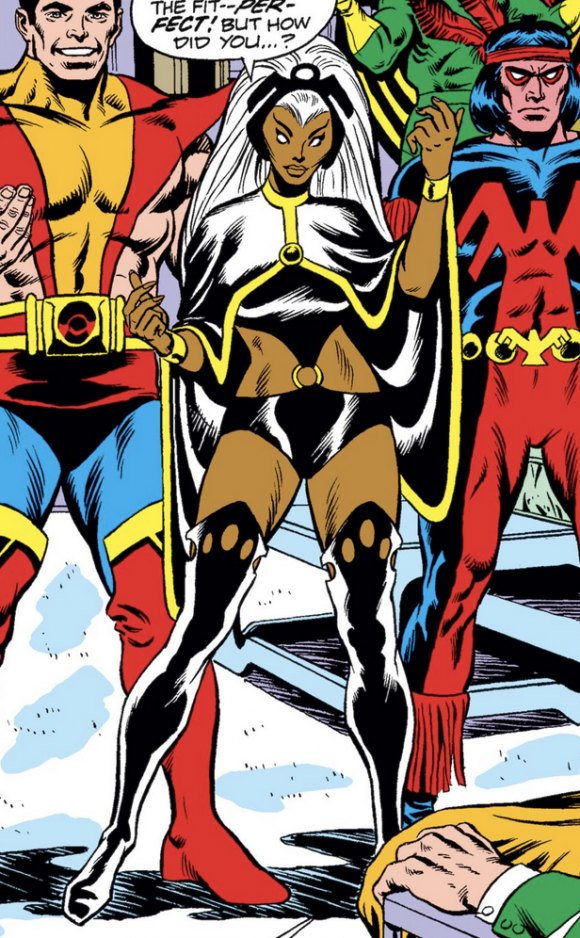 The Brood. I always saw these guys as a Marvel version of the “xenomorphs” from Alien, etc., so when compiling this list I looked it up and found they first appeared in X-Men #155 in 1982, so I’m figuring I’m not too far off the mark. (The movie came out in ’79.) Still, Dave endowed these buggers with a lot of buggy baggage, making them some of the creepiest creatures to ever haunt the nightmares of the Marvel Universe’s denizens. Pure evil. 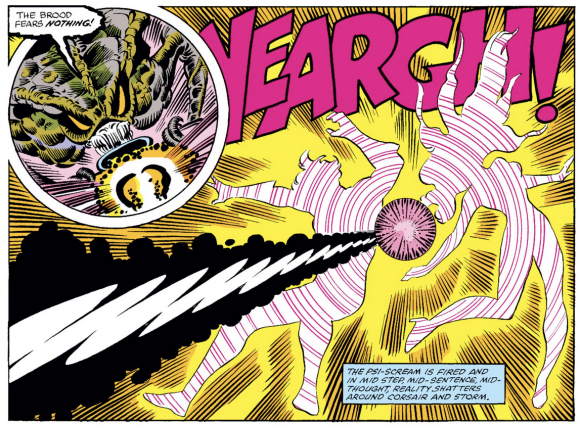 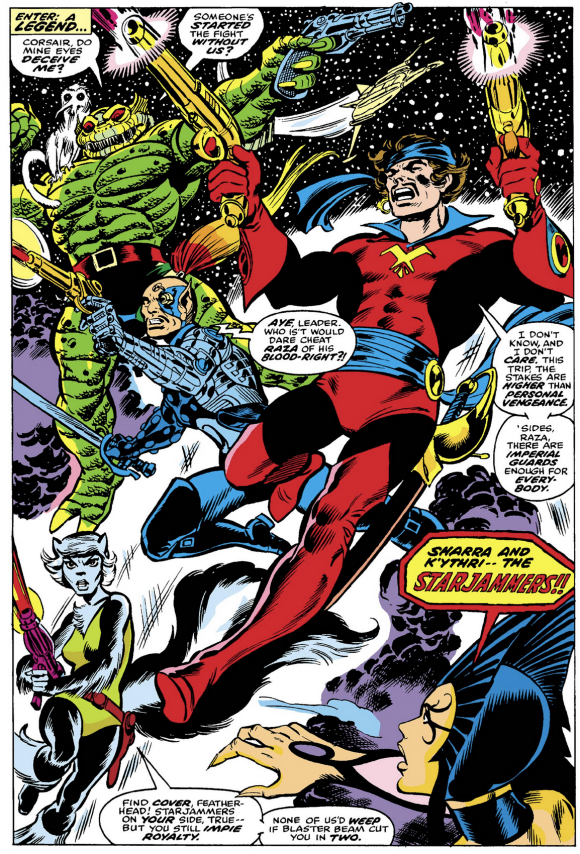 Black Cat. Didja know Dave designed Marvel’s Black Cat? According to Felicia Hardy’s co-creator Marv Wolfman, the original visuals for the feline thief were crafted by Cockrum, but were drawn by artist Keith Pollard for the Cat’s first turn in Amazing Spider-Man #194. I’ve always liked the look; sleek and simple. 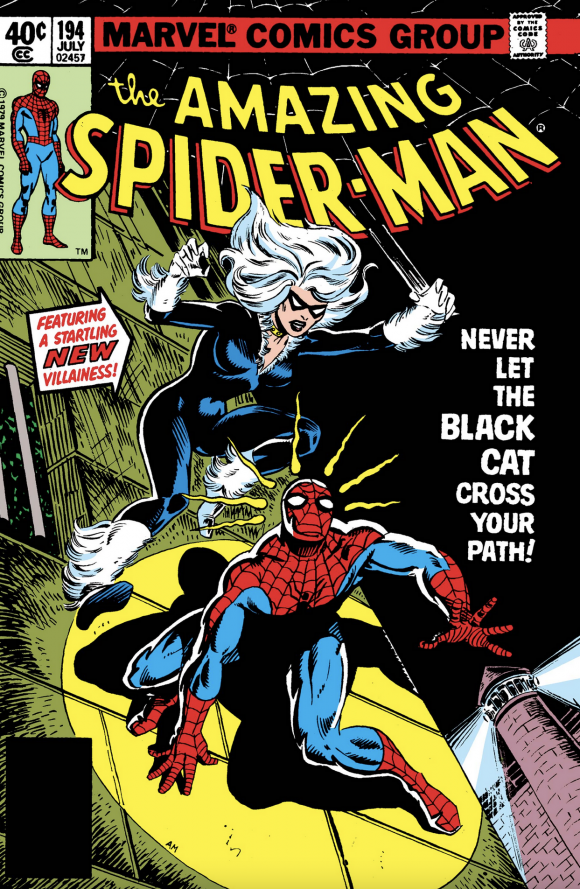 Webwing. I’ve saved the very best, my most favorite, for last. Ladies and gentlemen, I give you the gruesome glory of… Webwing! Introduced in Uncanny X-Men #157 as neither a Starjammer nor a member of the Imperial Guard — Ha! Gotcha! — this dastardly dude’s debut still turns my stomach, a testament to Dave’s genius with way-out weirdies. And you don’t get more way-out than this one. 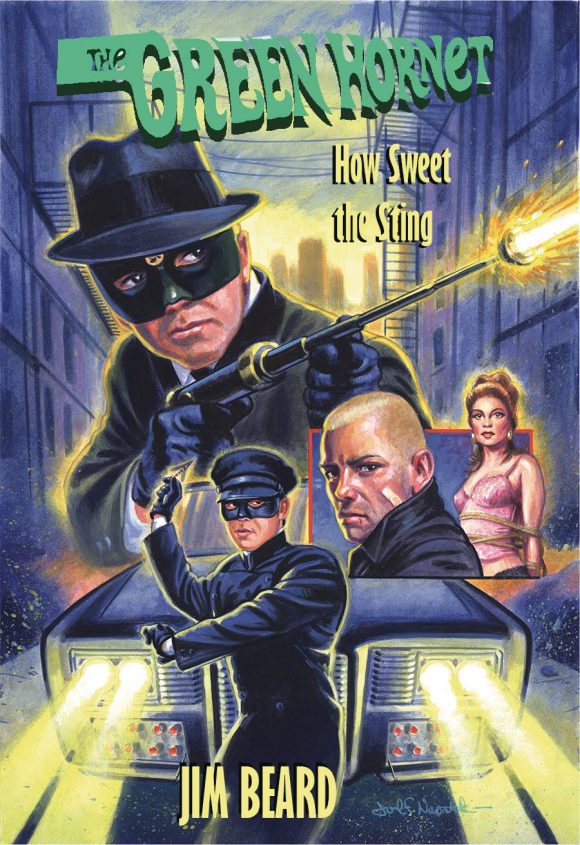