13 CLASSIC CEREALS That We Miss — RANKED

Bring these back now! 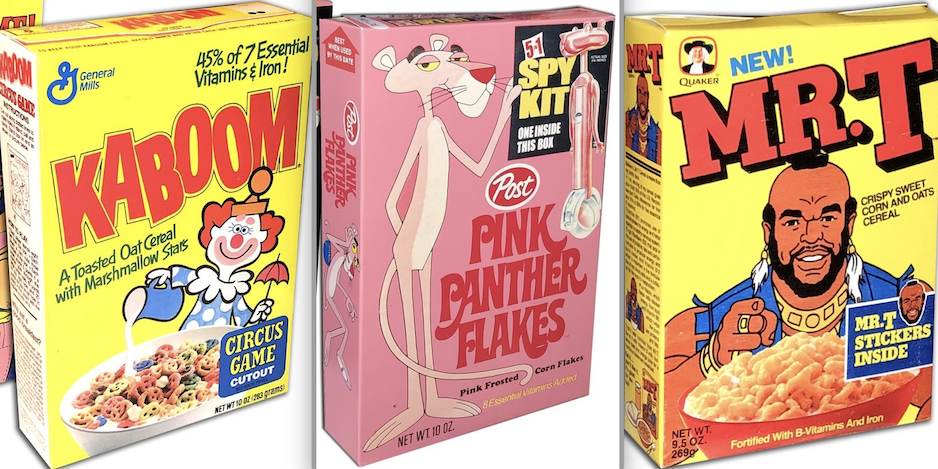 Our pal Anthony Durso — the owner of The Toyroom custom and repro packaging company — is an expert on classic cereals that went perfectly with Saturday morning cartoons but sadly no longer exist.

While you can’t have the cereal, however, you can get the boxes — Anthony makes tasty reproductions. (Ordering info is below.) Just as importantly, Anthony has put together this essential column to whet your appetite: 13 CLASSIC CEREALS THAT WE MISS — RANKED.

I’ve been a cereal connoisseur for as long as I can remember. In fact, some of my earliest memories are Kellogg’s tie-ins with the Banana Splits, Josie and the Pussycats and Dastardly and Muttley. And I still have my Apple Jacks Bowl and Mug Set that (I’m assuming) my mother mailed in 50 cents for back in 1967. Cereal boxes have had some of the greatest product designs over the years and their mascots are legendary. Everybody knows Tony the Tiger, Toucan Sam and Cap’n Crunch. Iconic brands that are still around today. But what about those cereals from long ago that have been lost and forgotten? Never to be seen on store shelves again? Well, pour yourself a big bowl of your favorite sugar-coated concoction and let’s did right in…

13. OJ’s. OJ’s was a short lived (1985-86) cereal from Kellogg’s that, according to the box, had “10% real orange juice and natural flavors.” Orange juice in a cereal? They even broke it down further: “All the vitamin C of a 4 oz. glass of orange juice.” So it had to be part of any nutritious breakfast, right? Alas, it wasn’t long before the spokesman, O.J. Joe, an orange rustler, went riding off into the sunset on… an orange. Unfortunately we’ll probably never see this again, thanks to problematic name association with another O.J. Yikes! 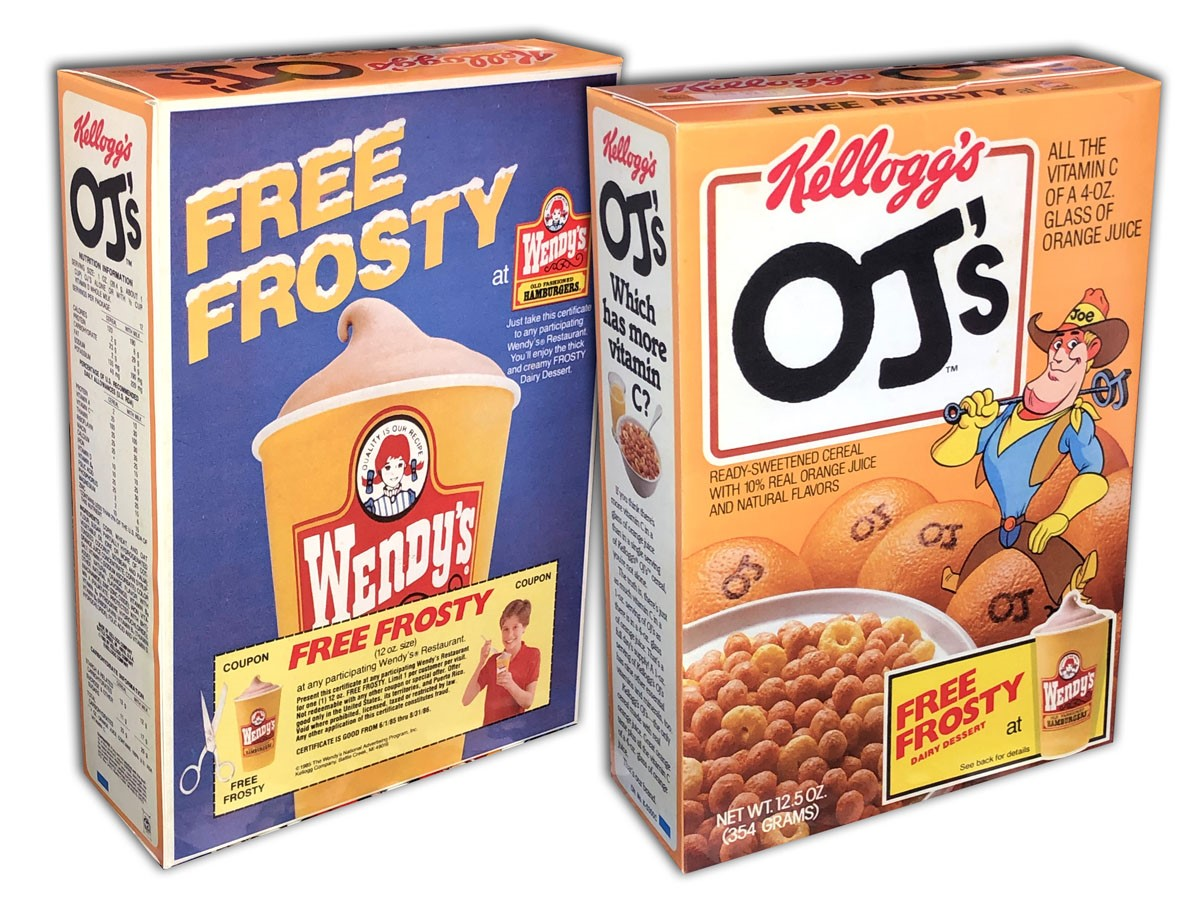 12. Quake. Quaker Oats introduced Quisp and Quake cereals in 1965. Quisp was repped by, um, Quisp, an alien crown prince from the Planet Q. His arch-nemesis was Quake, a super-hero type miner. They battled each other back and forth in TV commercials (by Jay Ward, of Rocky and Bullwinkle and Dudley Do-Right fame) and on store shelves until 1972 when Quake crumbled. A few years prior, Quake had been given a makeover (he became an Outback cowboy) in an attempt to boost sales. It didn’t work. Quaker held a contest to determine which cereal was preferred and Quake lost. Quisp, though, continued along until 1979 when it was also discontinued. But Quisp bounced back in 1985, and then again in the ’90s, and again in 2001 (as the first “internet cereal”). It’s still available today in certain grocery chains and online, but you have to know where to look. Meanwhile, Quake sits at home, both uniforms in his closet, waiting for his call. 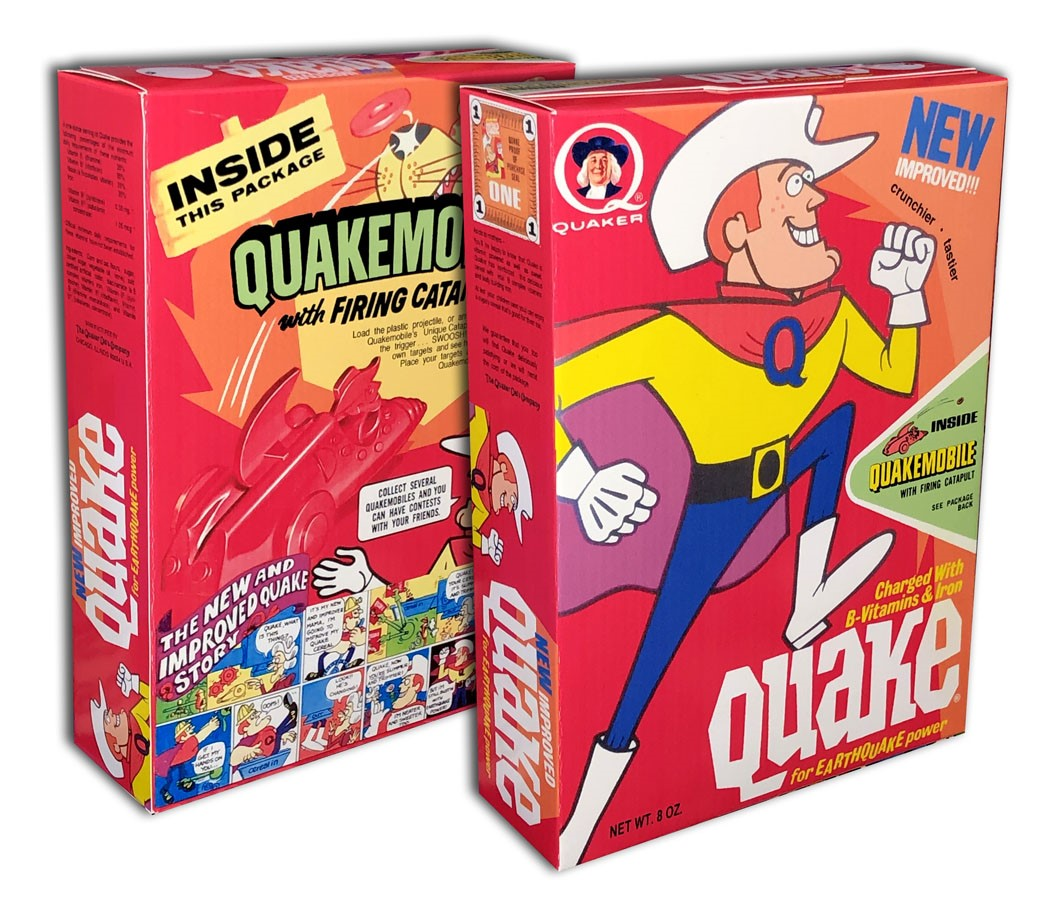 11. Quangaroos. As Quake ended his solo career, he became the sidekick to Simon the Quangaroo in 1972 as co-spokesmen (?) of the new Quake’s Orange Quangaroos, an orange-flavored puff cereal. Eventually, Quake was booted from this job as well. Simon was left to carry on for the renamed Orange Quangaroos until 1976, when he too lost a consumer vote contest to the almighty Quisp. It’d be great to see this trio of beloved cereals back on the store shelves to battle it out once again. And if they separated Quake into his two different identities, it’d be a quazy quartet. 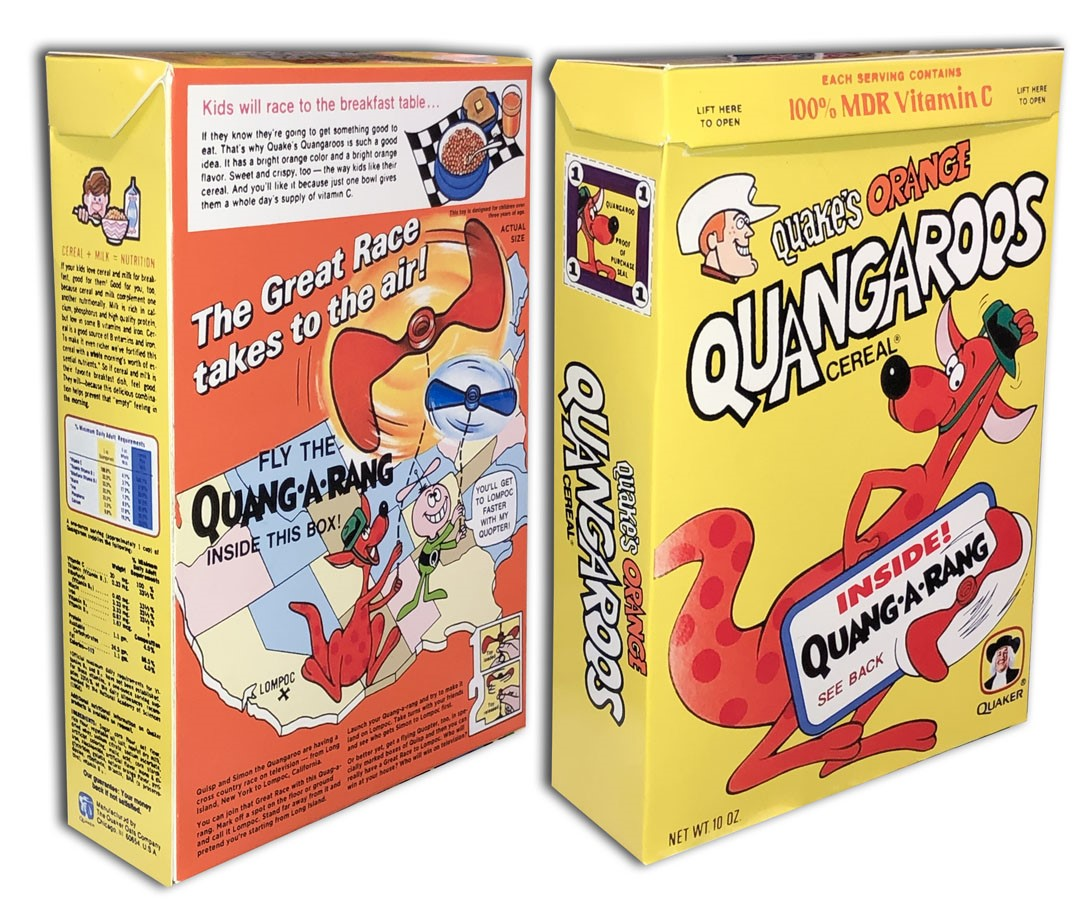 10. Smurf-Berry Crunch. I wasn’t usually one for the tie-in cereals (thus explaining my disinterest in most cereals from Ralston), but Post’s Smurf-Berry Crunch was a favorite. First introduced in 1983 (at the height of Smurf fever), it lasted until 1987, when it was replaced by the inferior Smurf Magic Berries (which now had marshmallows). Even though I consider the Smurfs’ rise to prominence as the beginning of the downfall of Saturday morning cartoons, the Smurfs is one of those iconic ’80s brands and there’s probably still some Smurf-life left in a Smurf cereal. 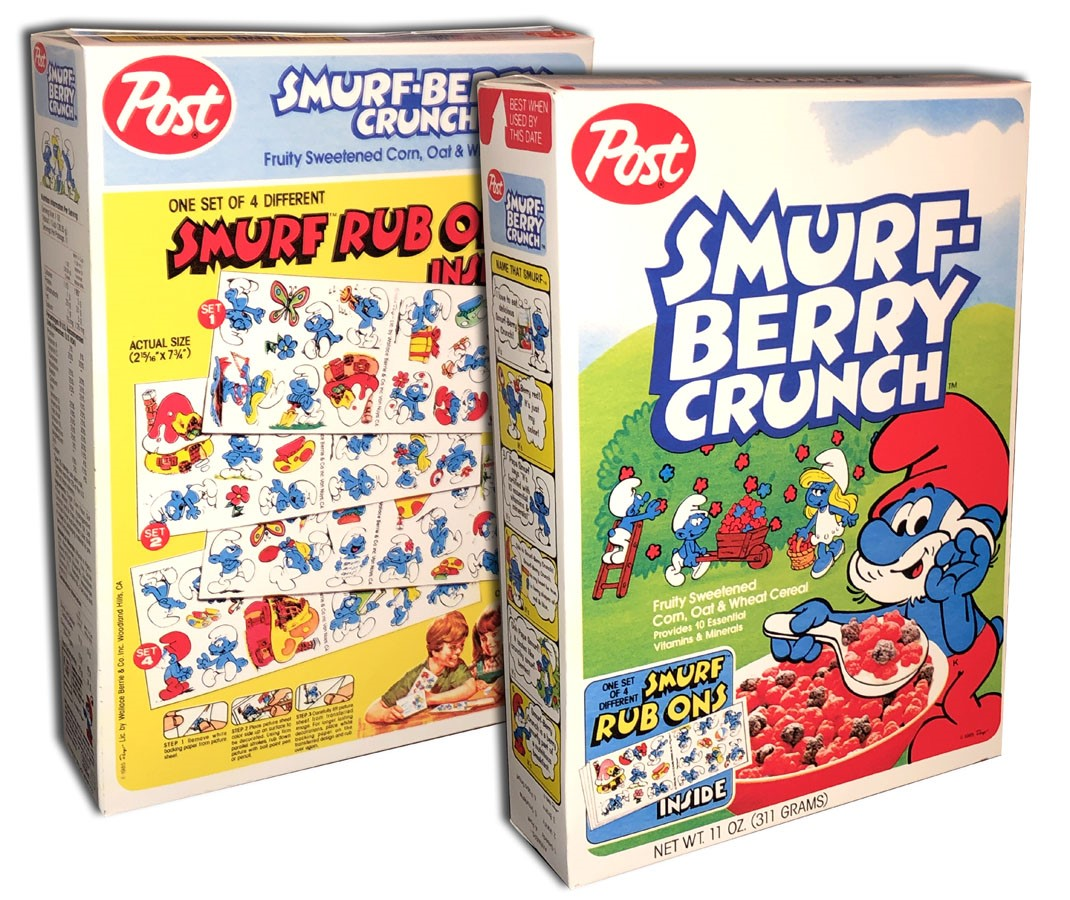 9. Super Orange Crisp. Post introduced it’s first sugar-coated cereal targeted specifically to children, Sugar Crisp, way back in 1949. The puffed wheat cereal had a few spokesmen like the Three Bears (Handy, Dandy and Candy) and Mighty Mouse before finally settling on Sugar Bear in 1964. A year later the cereal was renamed as Super Sugar Crisp. The “vitamin powered” cereal allowed Sugar Bear to transform into Super Bear and wallop his foes with a “vitamin-packed punch.” Along the way, Super Sugar Crisp acquired a spin-off cereal in 1972 called Super Orange Crisp, which was basically the same formula but with added orange-flavored rings. It actually went one better than Kellogg’s OJ’s as it claimed that “one ounce contains MORE vitamin C than a glass (4 oz.) of orange juice.” It ran out of juice, however, and only lasted a couple of years. Sugar Bear and Super Sugar Crisp carried on, although it eventually became Super Crisp, Honey Crisp, and currently Golden Crisp (in successive efforts to eliminate the word “sugar” from the name). Still, there has to be some appeal to Super Orange Crisp and if we all concentrate hard enough, maybe Post will squeeze some out. 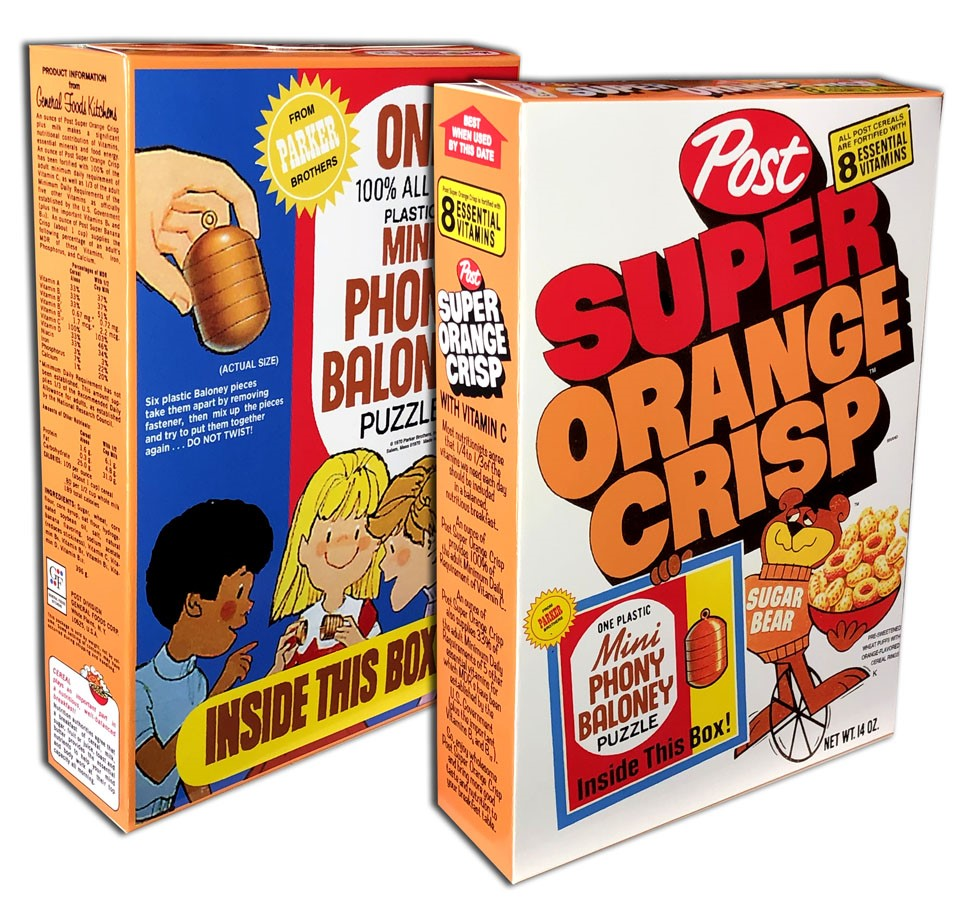 8. Alpha-Bits. Post introduced Alpha-Bits (sugar-frosted oat cereal in alphabet shapes) in 1957. It had a long shelf-life and went through many spokesmen over the years, including postman Lovable Truly and various kids named Alphie. It might be best known for the some of the groovy tie-ins and promos it had with the Archies, the Jackson 5, and the Groovie Goolies in the ’70s. By 2006, though, Post removed it from the market. It returned in 2008 — with “0% Sugar!” — until consumer protest forced the return of the original formula later in the year. It was reformulated again in 2017. And wouldn’t you know it… Post discontinued it AGAIN in May 2021. Do I have to spell it out for you, Post? B-R-I-N-G. I-T. B-A-C-K. 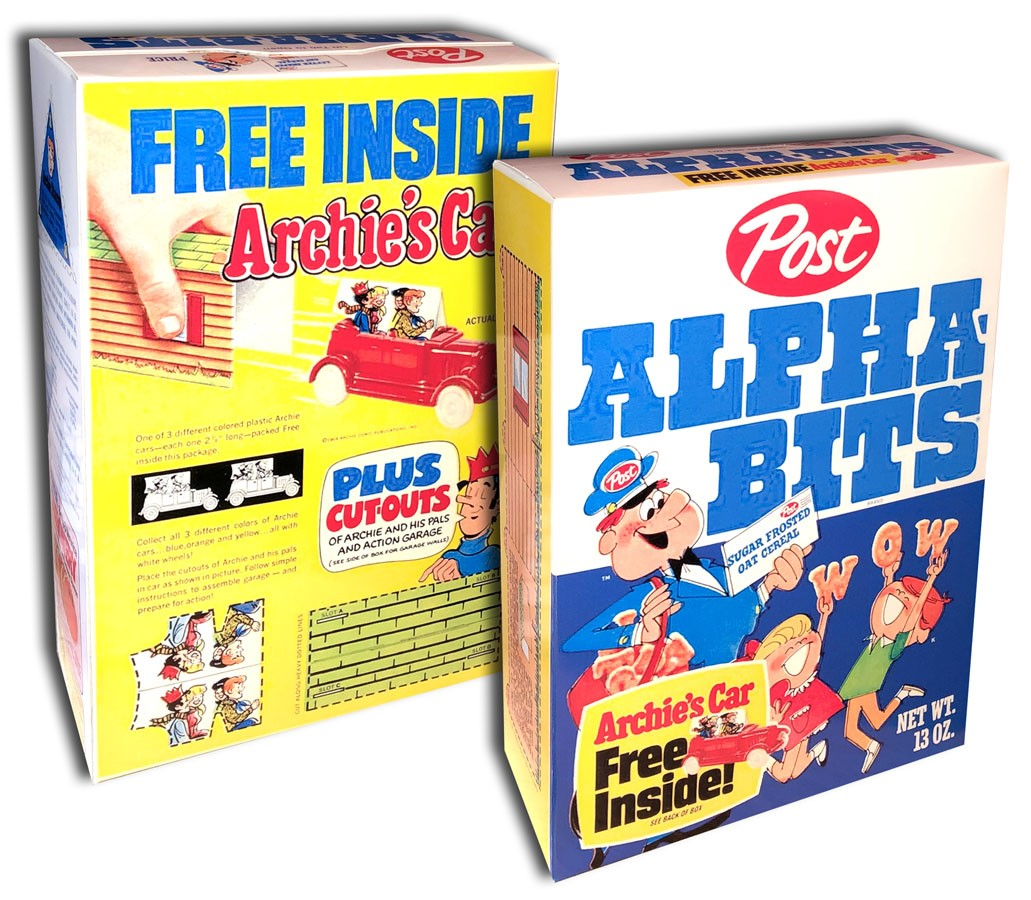 7. Punch Crunch. Today it seems as though there’s a new short-lived Cap’n Crunch cereal every time you turn around. But back in the ’70s they were a little more selective and developed a family line. The Cap’n Crunch line consisted of its namesake (1963), as well as Crunch Berries (with the Crunch Berry Beast, 1967), Peanut Butter Crunch (with Smedley the Elephant, 1969), Vanilly Crunch (first with Sea Dog and later Wilma the Winsome White Whale, 1972) and even Cinnamon Crunch (fronted by Cap’n Crunch’s arch-enemy Jean LaFoote, 1970). And then there was Punch Crunch (with Harry S. Hippo). Punch Crunch was introduced in 1975 and only lasted two years before it was shipped off. The fruit punch flavored cereal was something different from anything else on the market at the time. It’d be a unique, welcome flavor if Quaker Oats ever decides to re-launch it. 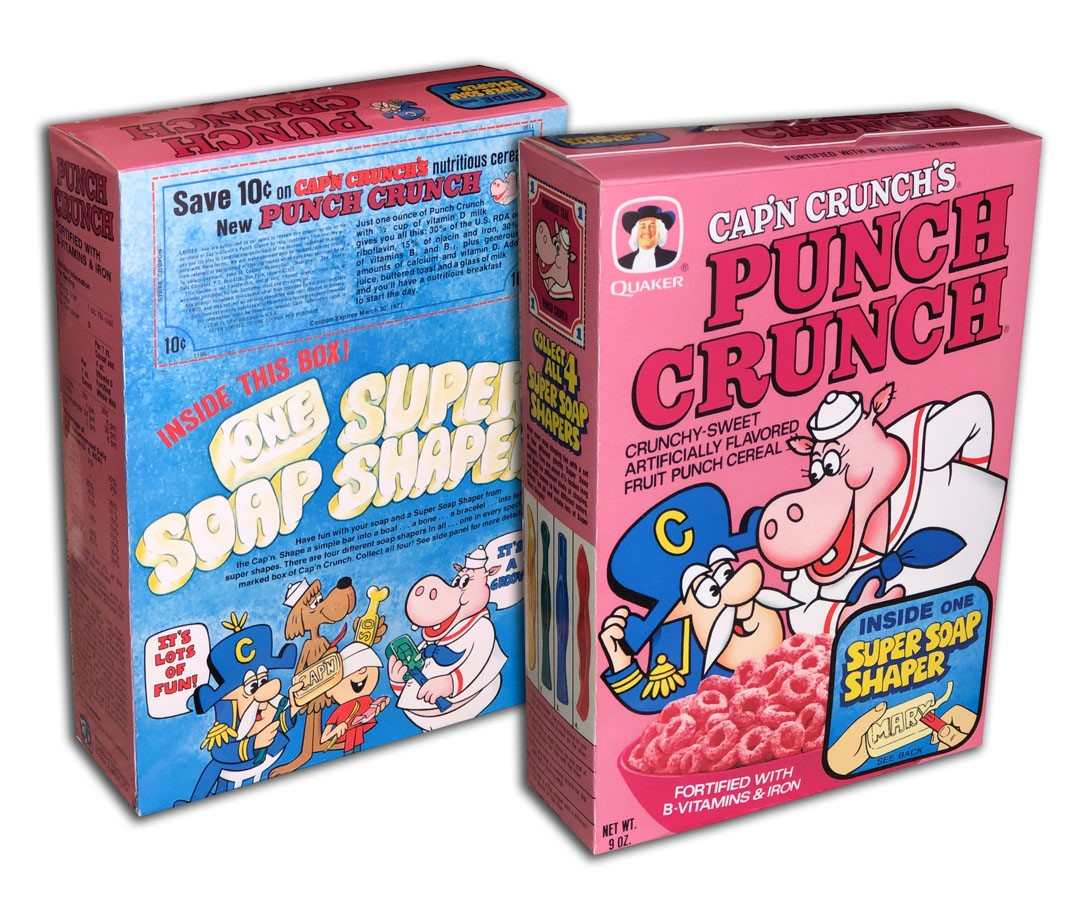 6. Crazy Cow. Chocolate or strawberry? What’s your preference? General Mills introduced these cereals in 1972 but didn’t launch nationally until 1977. The gimmick here was the corn cereal bits were coated with drink mix, which would dissolve in the milk, turning the milk into chocolate or strawberry milk. It had a decent run, lasting until 1983, when GM decided they couldn’t milk it anymore. It’s udderly ridiculous to think they’ll ever bring it back but I’d be over the moon if they did. 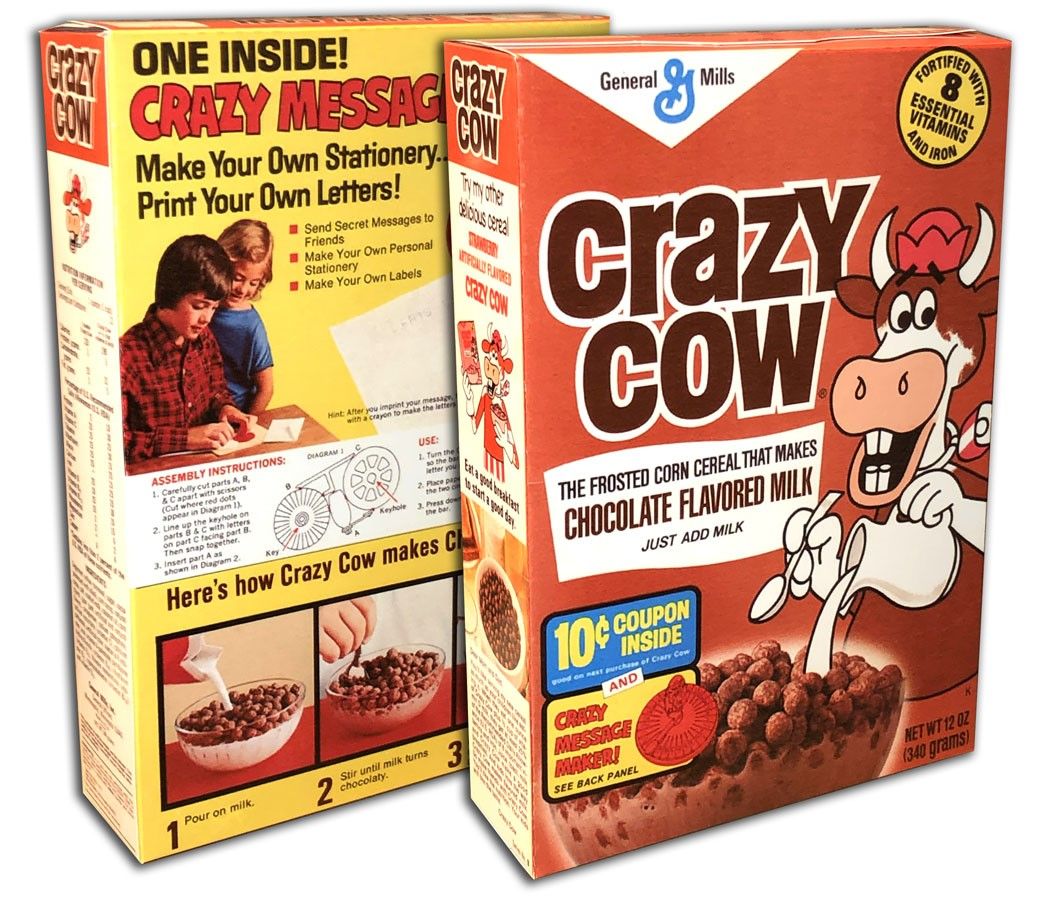 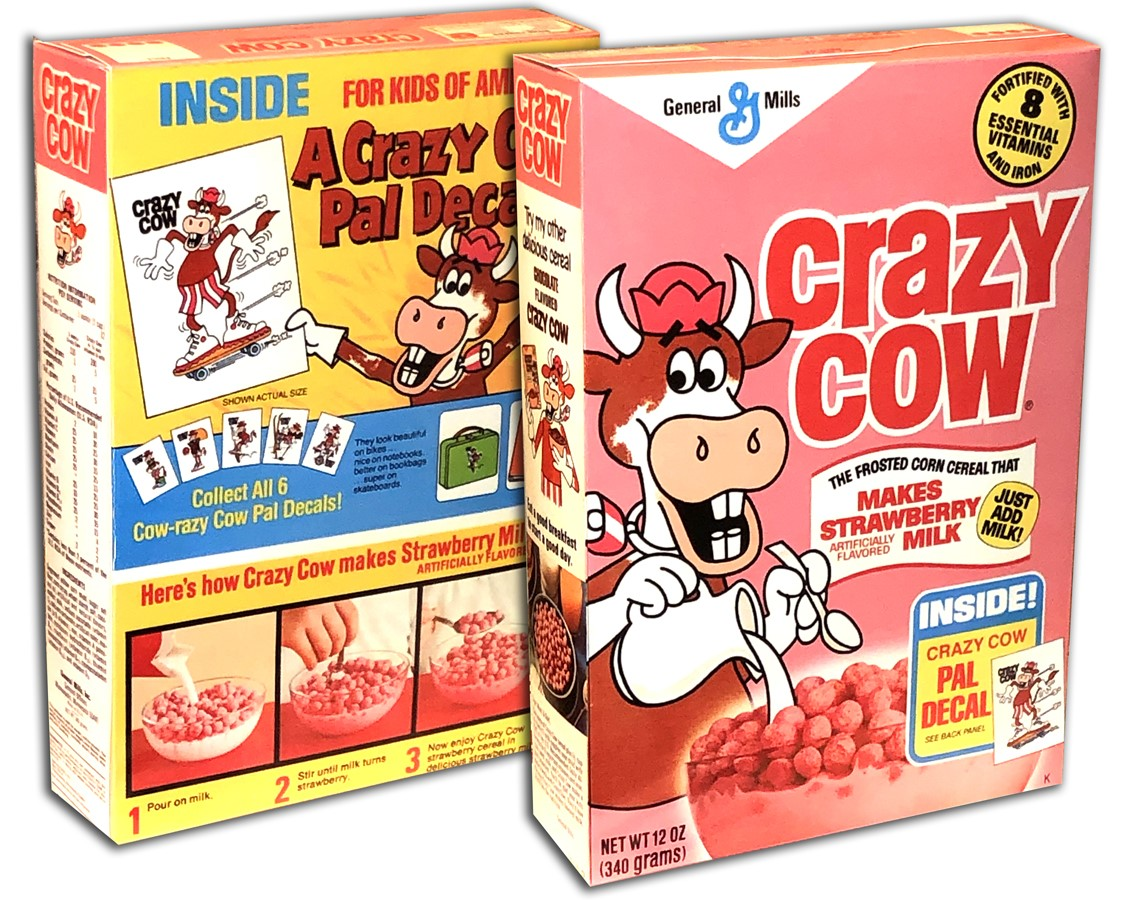 5. Pink Panther Flakes. The Pink Panther was a Saturday morning cartoon staple in the ’70s (debuting in 1969), a spin-off of the character used in the opening credits of the Peter Sellers (Inspector Clouseau) Pink Panther movie series (which began in 1963). The cartoon series was produced by De-Patie-Freleng Enterprises and had a long shelf life, running from 1969-1980, in various incarnations. The tie-in cereal from Post, however, didn’t last as long. It was only available from 1972-74. The pink frosted corn flakes cereal is fondly remembered for the various in-box prizes such as the 5-in-1 Spy Kit and the Pad of Disappearing Paper. While his footprint on pop culture isn’t as large as it once was, as the theme song said “Everybody loves a panther that’s pink”, so “Think Pink!” 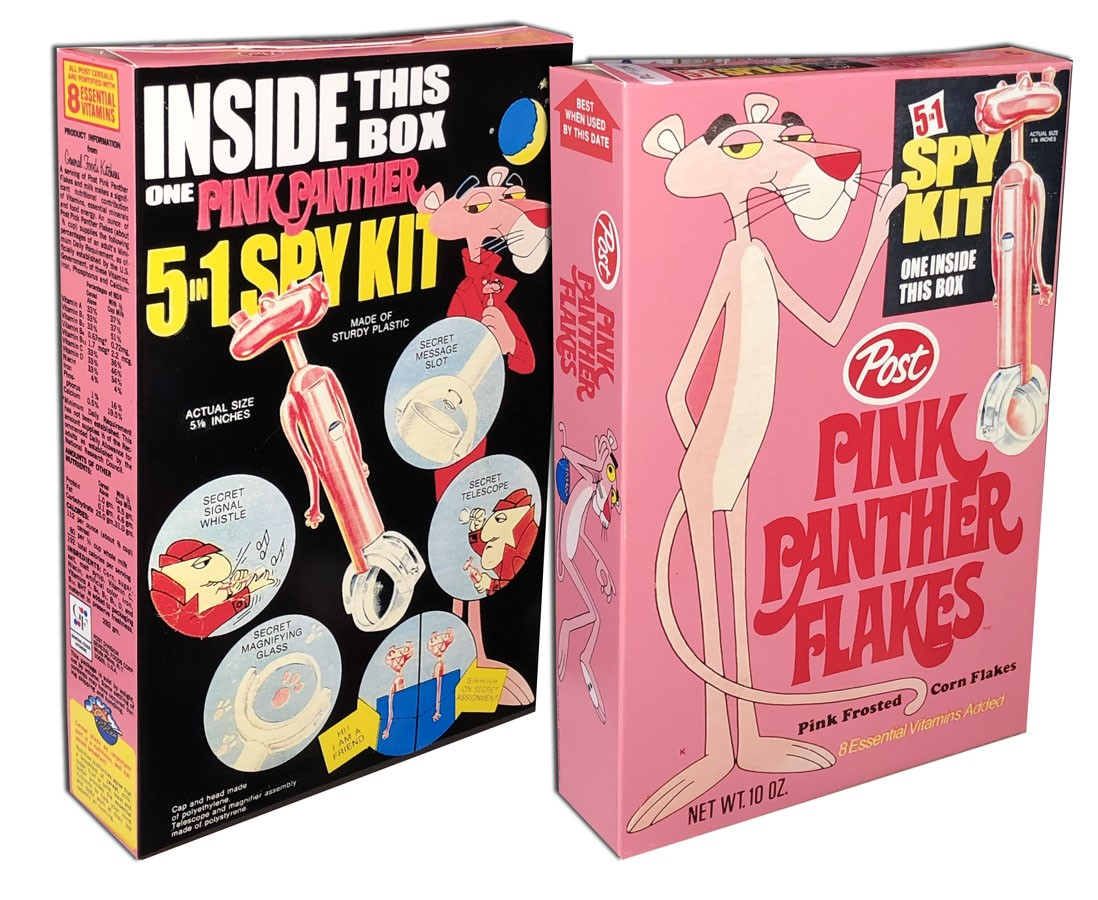 4. Mr. T. Most of the tie-in, licensed cereals in the ’80s came from Ralston. Ralston (at the time, part of Ralston-Purina… yes the pet food company) was known for such terrible tasting cereals as Urkelos, G.I. Joe Action Stars, Gremlins, and Donkey Kong. But they also had some success with their own concepts like Freakies and Cookie Crisp (now owned by General Mills). But the majority of their output was short-lived cereals cashing in on what was popular at the movies, on TV, or in the toy aisles. In fact, Mr. T would fit right in as a Ralston cereal. But it wasn’t. It was made by Quaker Oats (its first licensed cereal). Similar in flavor to its Cap’n Crunch, Mr. T was based on the cartoon version (1983-85) of the famous tough guy and was released in 1984. It outlasted the cartoon it was based on, leaving store shelves in 1993. But it’s been a cultural touchstone ever since, appearing in movies like Pee Wee’s Big Adventure, Boomerang, and Bumblebee, as well as the TV show Stranger Things. I pity the fool that doesn’t think this would sell like gangbusters if it popped up in stores again. 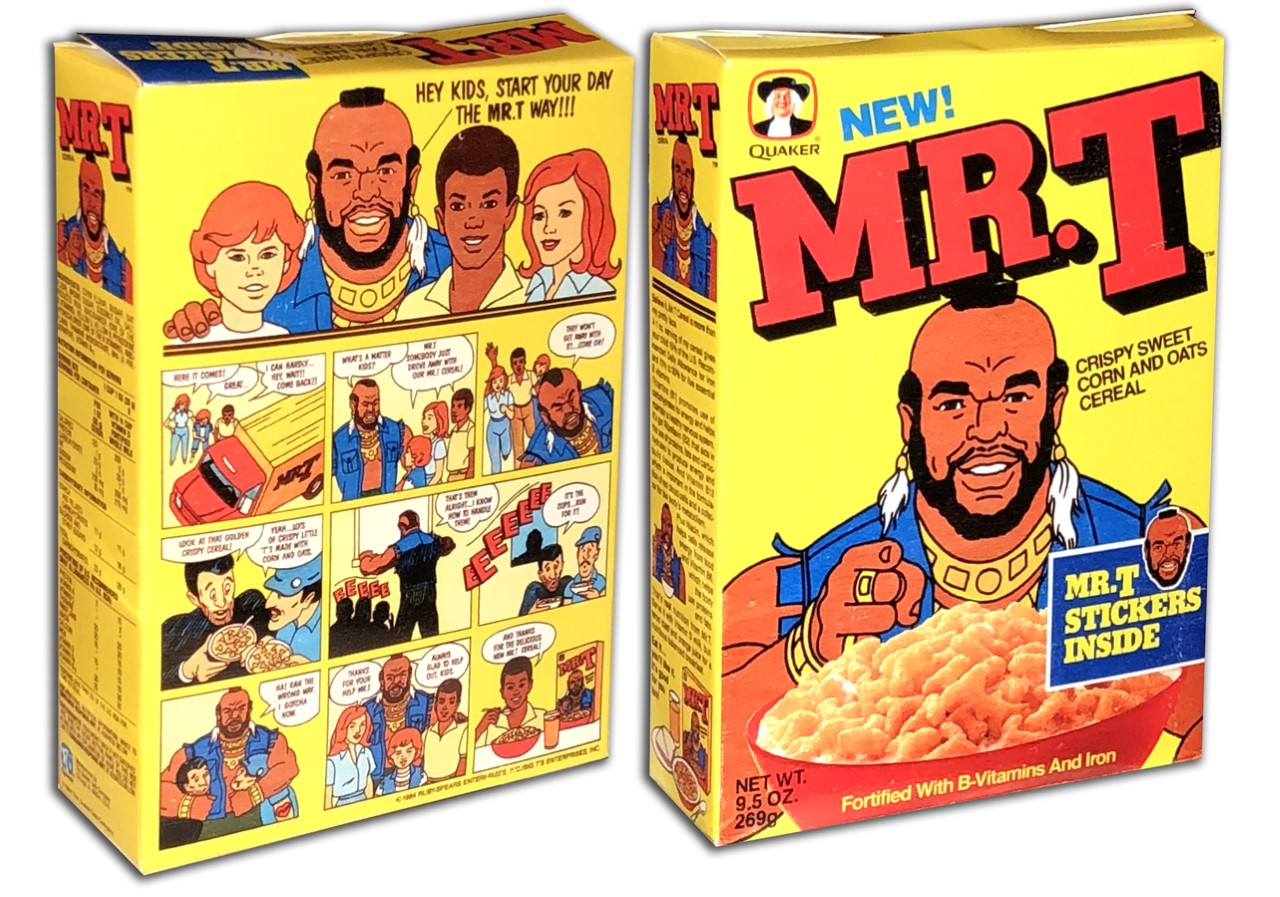 3. Sir Grapefellow and Baron Von Redberry. You can’t have one without the other. These World War I-themed archrivals were first introduced by General Mills in 1972. They were very similar to the battling duo of Frankenberry and Count Chocula, with Sir Grapefellow (the good guy) representing his grape-flavored with sweet grape starbits (marshmallows) cereal and Baron Von Redberry (the bad guy) fronting for his berry-flavored with sweet berry starbits cereal. Although they have a cult following today, their sales weren’t good enough to keep them around, crash landing in 1975. While the Monster Cereals get more press, Sir Grapefellow (“the grapest!”) and Baron Von Redberry (“der berry goodest!”) were just as good and deserve a return to the skies and store shelves. 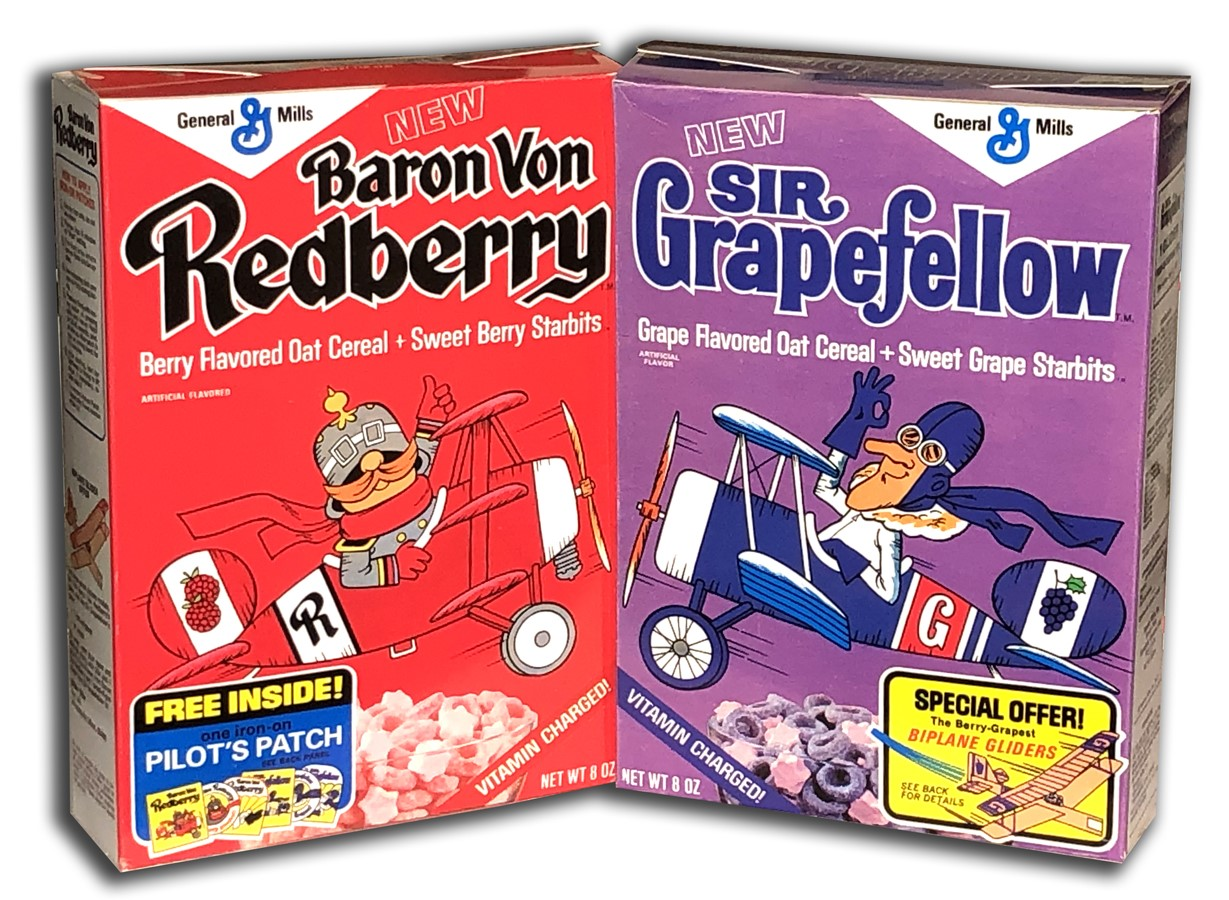 2. Fruit Brute. Fruit Brute, the fourth of the legendary Monster Cereals from General Mills, was first introduced in 1974. This fruit-flavored cereal (with LIME flavored marshmallows) quickly became a favorite, thanks in part to the werewolf Fruit Brute who extolled the virtues of the “howling good taste of fruuuuuuuit.” Eight years later, Fruit Brute was pulled from shelves and discontinued. His place in the line-up would be taken over in 1988 by the similarly flavored Fruity Yummy Mummy (which had vanilla marshmallows). Yummy Mummy too would eventually bite the dust in 1992. Both cereals were revived for the seasonal (Halloween) relaunch of the Monster Cereals in 2013. Fruit Brute officially made his return in 2022 but inexplicably it’s now a cherry-flavored cereal. Bring back the ORIGINAL fruit/lime combination, General Mills! Not this subpar knock-off! And he needs to be brought back whenever the Monster Cereals are inevitably resurrected each year, not once in a blue moon. 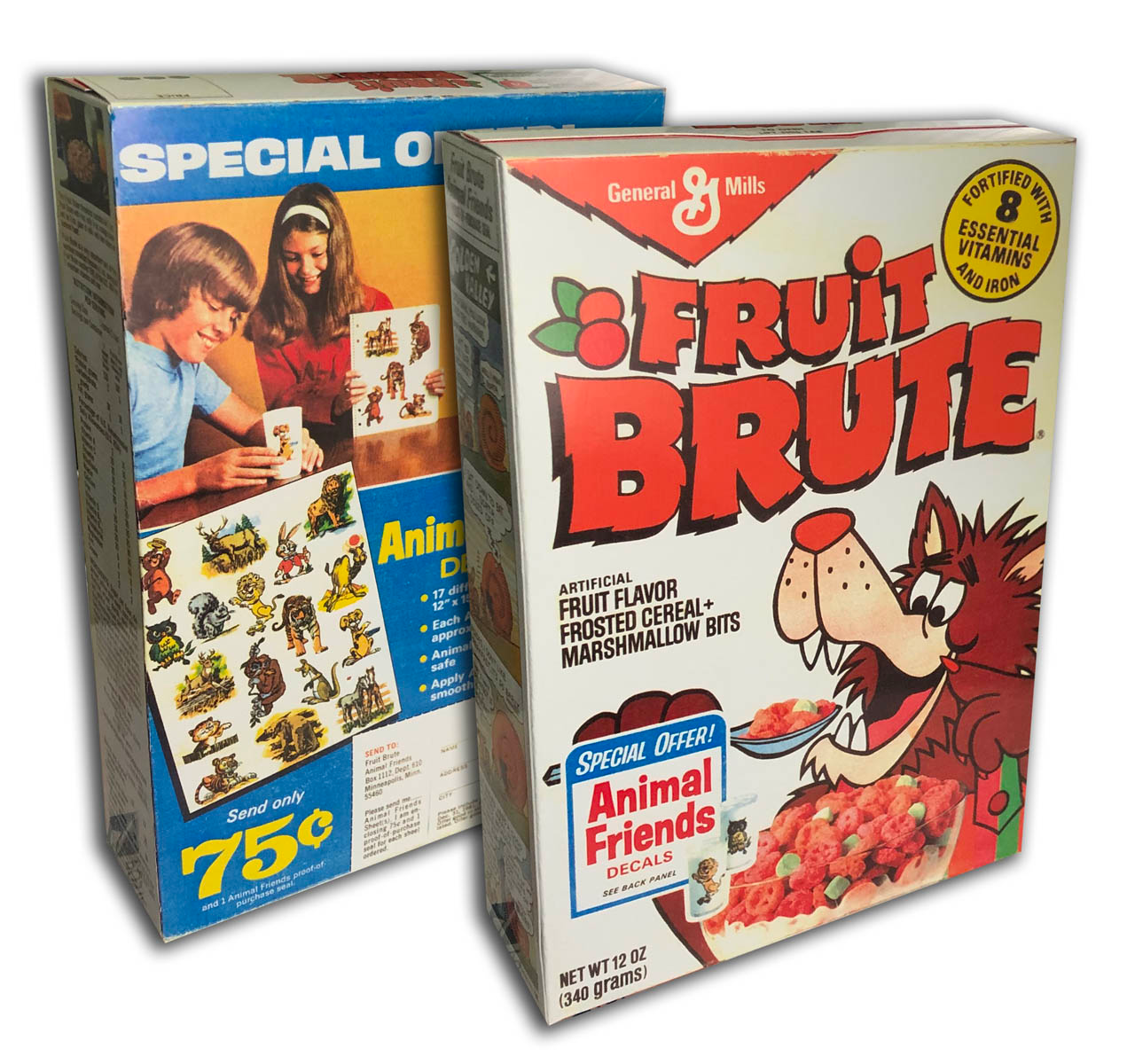 1. Kaboom. Yet another General Mills cereal with marshmallows. In fact, they invented and cornered the market. First created for Lucky Charms in 1964, General Mills produced 22 years’ worth of “marbits” before any other cereal company gave it a go. Kaboom was released in 1969 and the star-shaped marshmallows and colorful smiley face oat cereal were a big hit. The circus themed box was a staple of store shelves for decades, until it was retired in 2010. It made its pop culture impact when it was used in a scene in 2003’s KIll Bill: Volume 1. A similar circus themed cereal, Circus Fun, had a short run (1986-89) while Kaboom was still available. But it’s Kaboom that was tops. Out of all the cereals on this list, its the one I think that would be head and shoulders above the crowd if it returned to stores. After all, you can’t keep a good clown down. If you’re interested in purchasing any of these repro boxes, check out The Toyroom’s website here. Each box is about $18 but prices vary.