13th Dimension readers are surely familiar with regular contributor Anthony Durso — owner of toy-package customizer The Toyroom and Retropolis Tees. Over the years, we’ve largely focused on his Mego 8-inch-scale playsets and boxes but obviously there was so much more to the 1970s.

So here are 13 GROOVY TOY BOXES FROM THE 1970s — in no particular order. (And, yes, Anthony makes all of these boxes — and many, many, many more. See info below.) 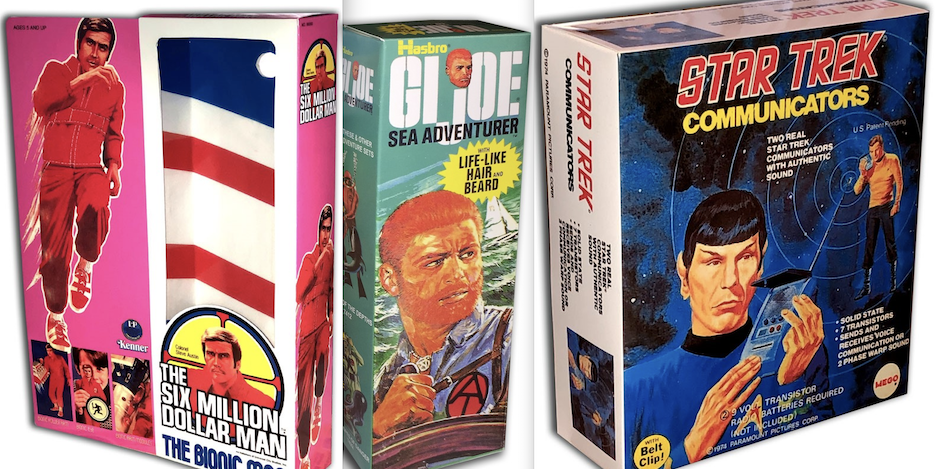 Six Million Dollar Man (Kenner, 1975). One of the biggest toy lines of the ’70s (pre-Star Wars, that is) has to be Kenner’s Six Million Dollar Man line, based on the 1973-78 TV series starring Lee Majors. The Bionic Man was on toy store shelves everywhere with several 13-inch action figure variations as well as playsets, accessories and even some fashions. 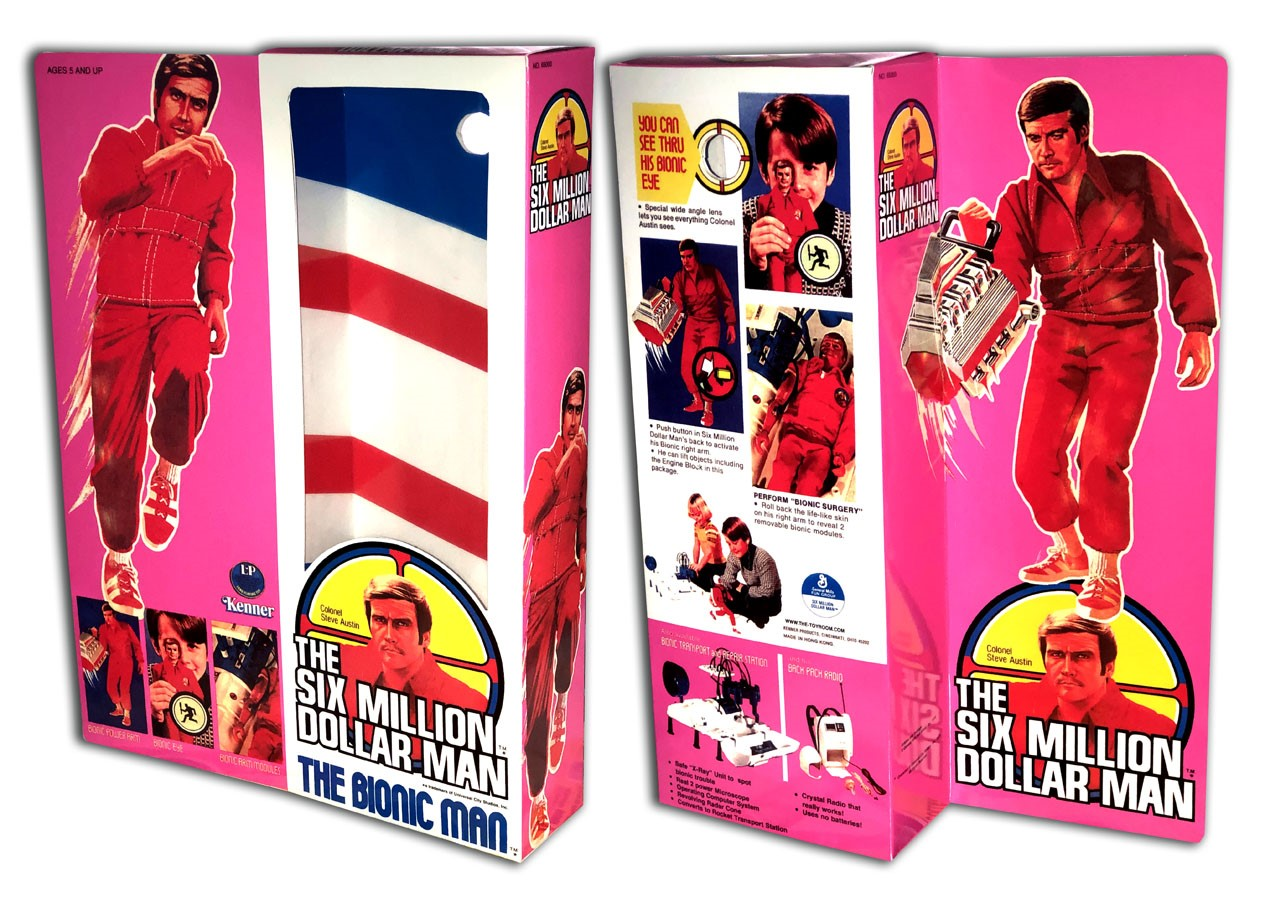 The most famous of the Steve Austin figures was the first-issue version, complete with Engine Block (lifted by his bionic arm). Other versions were the Bionic Grip (with plastic girder) and Biosonic (with, um, ID bracelet). Eventually, Colonel Austin was joined by his boss Oscar Goldman (with EXPLODING Briefcase!), arch-villains Maskatron and Bionic Bigfoot, as well as a complete line dedicated to his off-and-on Bionic Woman girlfriend, Jaime Sommers.

The Game of Jaws (Ideal, 1975). The first movie to be known as a “summer blockbuster” kind of just… quietly snuck up on everybody. As the idea of summer tentpole movies with a robust tie-in action figure toy line didn’t quite exist yet, kids had to settle for a game based on the movie that was eating up the box office. But what an awesome game it was! 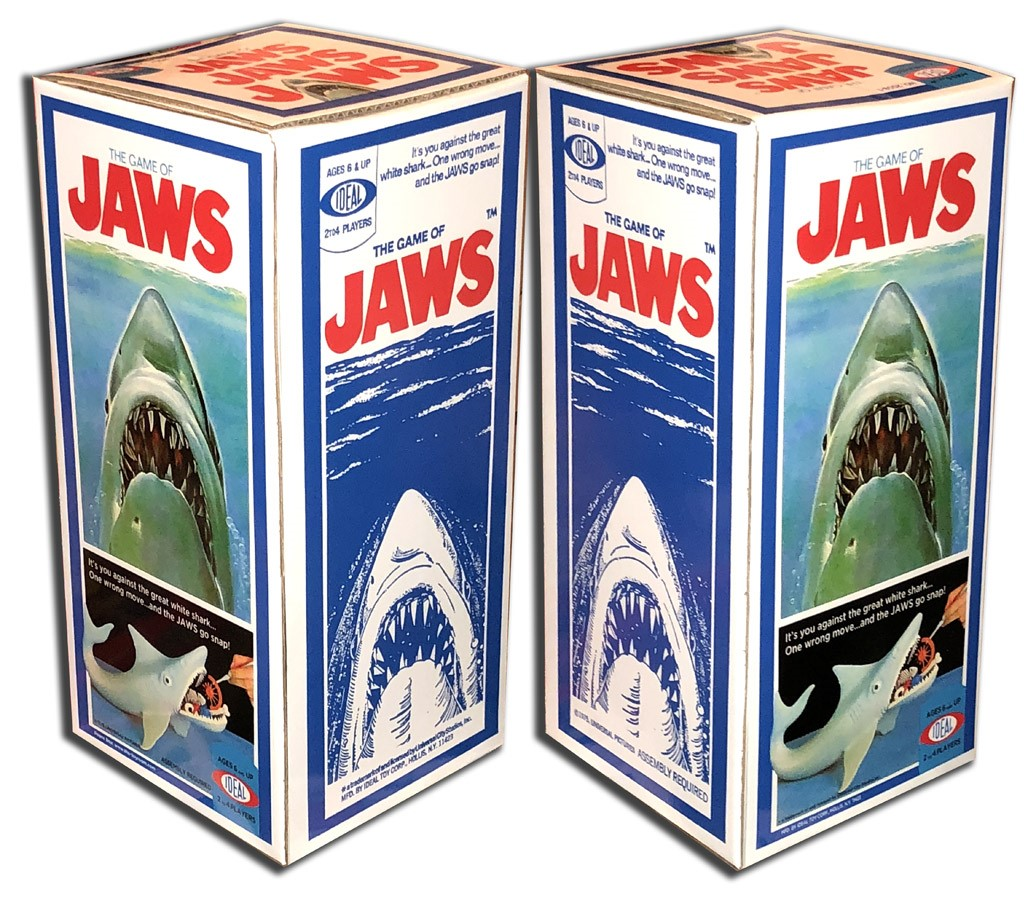 Two to four players were tasked with removing 13 pieces of junk, such as tires and bones, from the, um, jaws of “Jaws” (aka Bruce) with a gaff hook that kind of looked like it could’ve been part of a play dentist’s kit. The pieces weighed down the lower jaw (which was attached with rubber bands) and (in a combination of Operation and Jenga) if you removed the wrong piece, the jaw would snap shut and you’d be out of the game. The first player to successfully remove four pieces won. Jaws was in production for several years and eventually it was rebranded under the name “Sharky’s Diner.” You can’t keep a Great White Shark down for long.

G.I. Joe Adventure Team (Hasbro, 1970) By 1969, the G.I. Joe action figure line (originally introduced in 1964) had grown a bit stale and problematic, due to the Vietnam War. And so, the military aspect was put on hold and the Adventure Team was born. With “Life Like Hair and Beard,” the new G.I. Joes were action adventurers who found themselves searching for mummies, abominable snowmen and stolen idols (courtesy of various playsets). 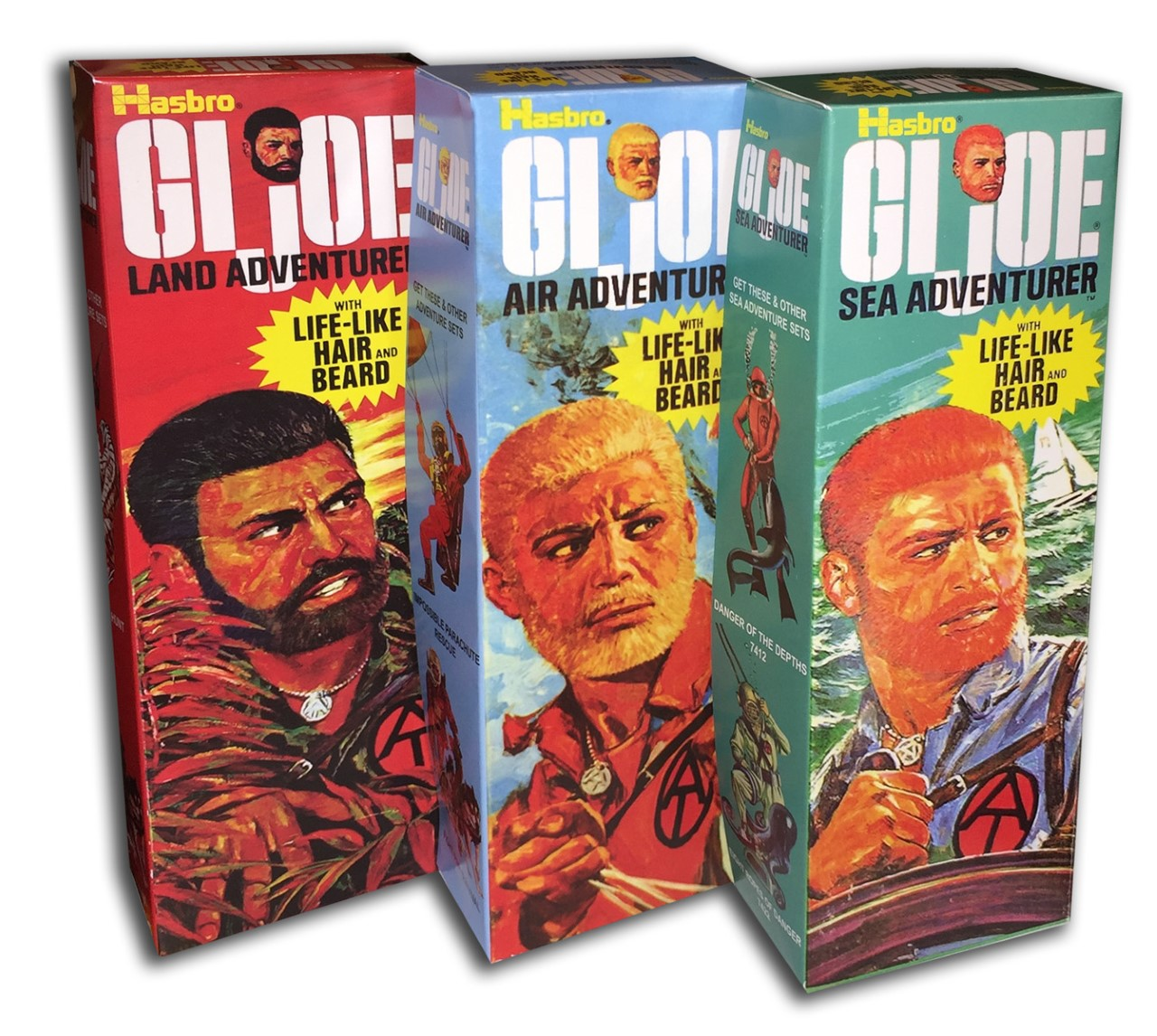 The Adventure Team consisted of the Land, Sea and Air Adventurers (distinguished by the color of their hair and beards) as well as the Man of Action (no beard) and the non-designated Adventurer (African-American) as well as a Talking Commander. In 1974, the patented “Kung-Fu Grip” was added to the figures.

Toward the end of the run, in an attempt to rejuvenate the line and compete with other toy lines, the Adventure Team added Mike Power (the Atomic Man) and Bulletman, the Human Bullet. An arch-enemy known as the Intruder was also added but by then the line was on its last legs and was finally put to rest in 1976. A smaller revival attempt branded as Super Joe wasn’t too successful. But by 1982, G.I. Joe was back on top with the Real American Hero line of 3 3/4-inch figures (the original Joes clocked in at 12 inches), which has pretty much been the standard ever since.

Big Jim’s P.A.C.K.: Dr. Steel (Mattel, 1975) Mattel’s 10-inch Big Jim line was originally introduced in 1972. Consisting of Big Jim and his buddies (Big Jeff, Big Jack and Big Josh), the line was a more sporty and athletic version of the G.I. Joe Adventure Team. Instead of mummies and deadly cobras, the Big Jim gang were more content to hang out in their Sports Camper and go hunting and fishing for the weekend. But by 1975, Big Jim was enlisted as the Commander of P.A.C.K. (Professional Agents/Crime Killers). Joining him on adventures of espionage and intrigue was a team of specialists who would’ve put Rollin Hand and Barney Phillips to shame. The P.A.C.K. members Warpath, the Whip and Torpedo Fist were all unique in their own right but it was Dr. Steel who stole the show. With his steel right hand and his mysterious dragon tattoo on his chest, this sinister Mr. Clean lookalike was known as “the Enforcer of the P.A.C.K.” 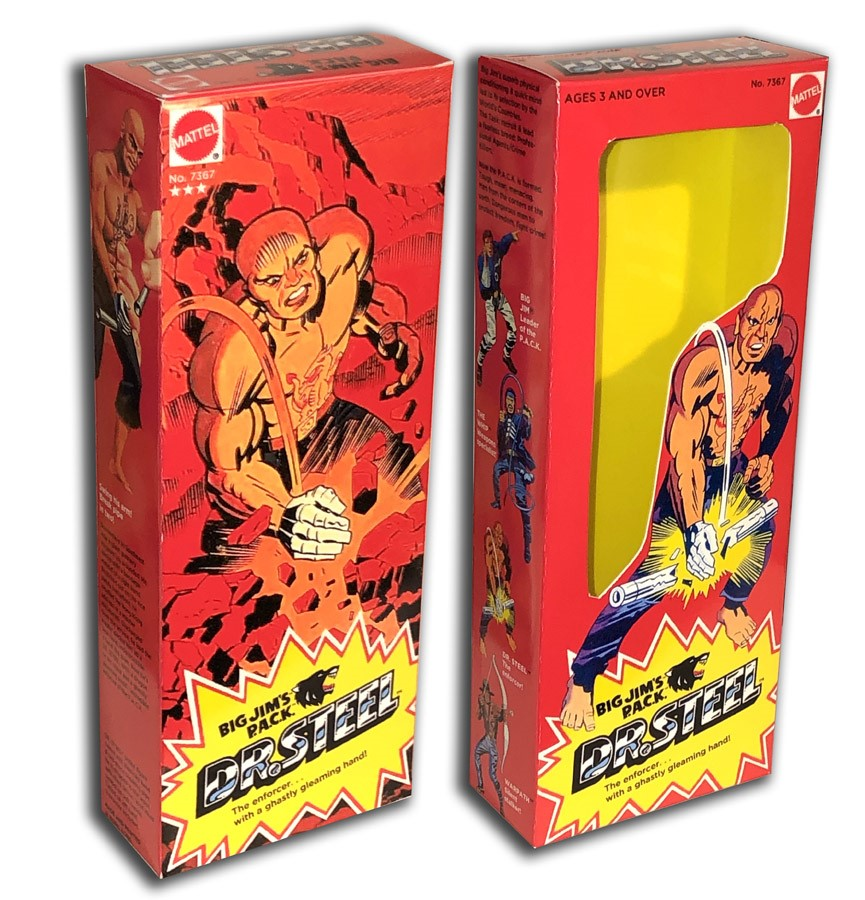 Best of the West Sam Cobra (Marx, 1972) Western toys were still a viable market in the ’70s. Originally introduced in 1965, the Johnny West line of 12-inch action figures consisted of typical cowboys and Indians such as Jane West, Chief Cherokee and General Custer. These figures didn’t have much articulation but they more than made up with it in the accessories department (usually marketed as “Over 20 Pieces!”). But, although successful, the line was kind of bland. What was needed was a villain. And in 1972 that villain was Sam Cobra, the Renegade Bad Man. 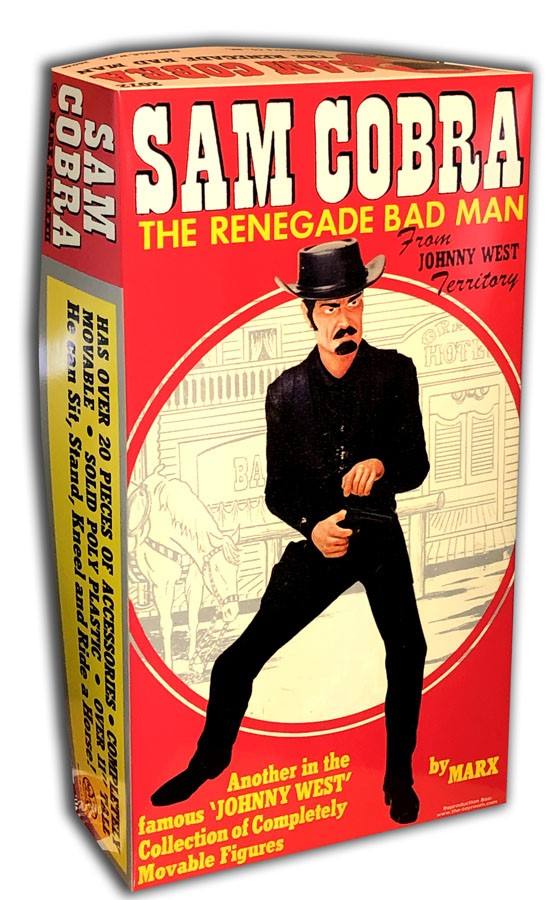 Dressed all in black and wearing a goatee, Sam Cobra was a towering figure reminiscent of the Lone Ranger’s enemy Butch Cavendish. And Sam came with a bunch of cool accessories too, including a safe, dynamite, a breakapart pool cue and a hidden derringer in his belt buckle. In fact, Sam’s body and his accessories were originally rumored to have been earmarked for a James West (Wild Wild West) figure that never came to market! By 1975, the “Best of the West” line (as it was now known) had one last hurrah before it rode off into the sunset.

The Lone Ranger (Gabriel/Hubley/Marx, 1973). Originally released by Gabriel, the Lone Ranger was an exhaustive toy line of 9-inchish action figures inspired by the Clayton Moore/Jay Silverheels TV series (1949-57) that was still popular in reruns into the 70s. Besides the obvious Lone Ranger and Tonto (and their horses Silver and Scout), there were also other action figures (including Butch Cavendish and Dan Reid) as well as disguise sets and adventure playsets. The line continued until 1977 when the Masked Man hung up his spurs. A brief 3 3/4-inch revival in 1980 was about as successful as the movie (The Legend of the Lone Ranger) that it was based on. 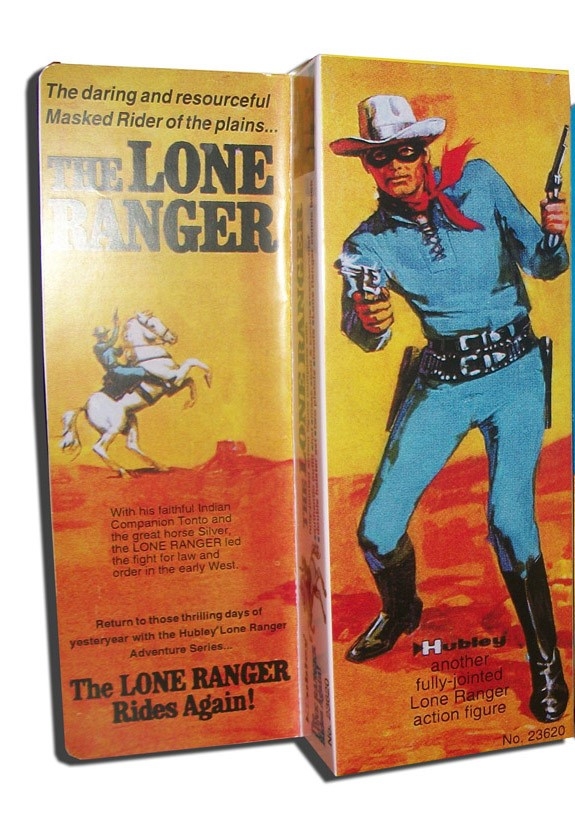 Pulsar, the Ultimate Man of Adventure (Mattel, 1976) Pulsar was Mattel’s gorier answer to the Six Million Dollar Man. Instead of bionics, Pulsar’s big draw was his pumping, pulsating organs. His heart “beats”! His lungs “breathe”! His blood “flows”! PLUS… mission disks that insert into his brain? Sign me up! Unlike the SMDM toy line though, Pulsar didn’t have a very deep bench. A Life Systems Center was a playset and Hypnos (the Ultimate Enemy) was his alien-like arch-foe. Unfortunately there wasn’t much life for Pulsar after that. 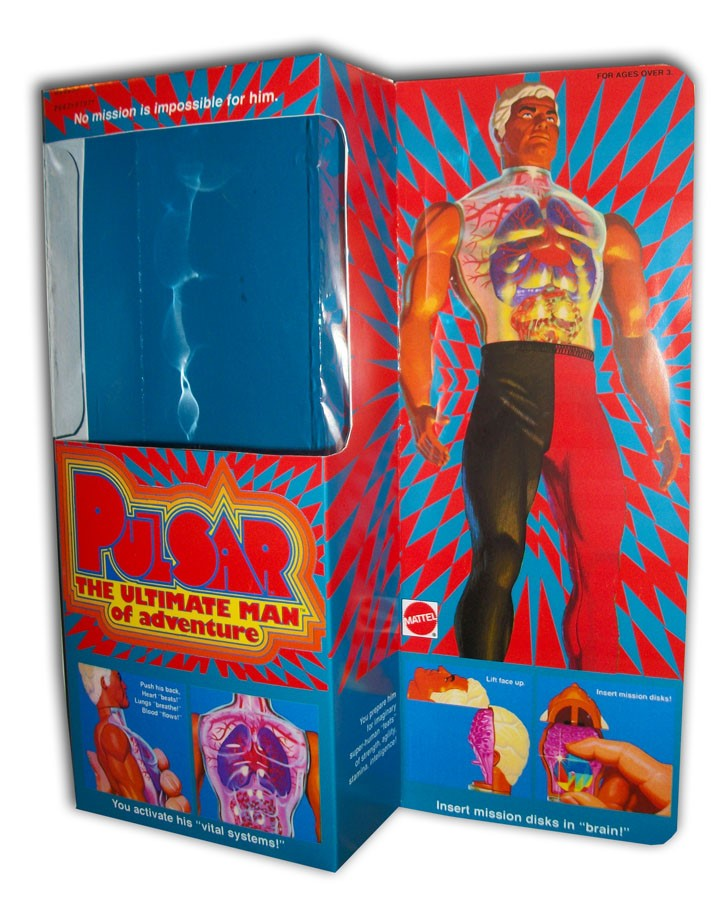 Gre-Gory (Mattel, 1979) In a similar vein to Pulsar was Gre-Gory, the Big Bad Vampire Bat. Big Rubber Bat is more like it. But Gre-Gory was much more than a typical dime-store jiggler. With a 15-inch wingspan, Gre-Gory also had the added attraction (ala Pulsar) of blood pumping belly action. And his fangs held quite a grip on unsuspected fingers. But although he had a prominent comic book ad in 1980, Gre-Gory was eventually laid to rest.

Fonzie (Mego, 1977) Aaayyy! Happy Days was a huge hit in the ’70s and was the No. 1 show the year Mego introduced a series of 8-inch action figures. Richie, Potsie and Ralph were there but the main focus was on The Fonz. With the ingenious “thumbs up” action when you pushed down on the lever on his back, Fonzie was wildly popular. So much so that Mego added a Fonzie’s Garage playset, Fonzie’s Motorcycle and Fonzie’s Jalopy (which was really Ralph Malph’s car but are you really going to say no to The Fonz?) 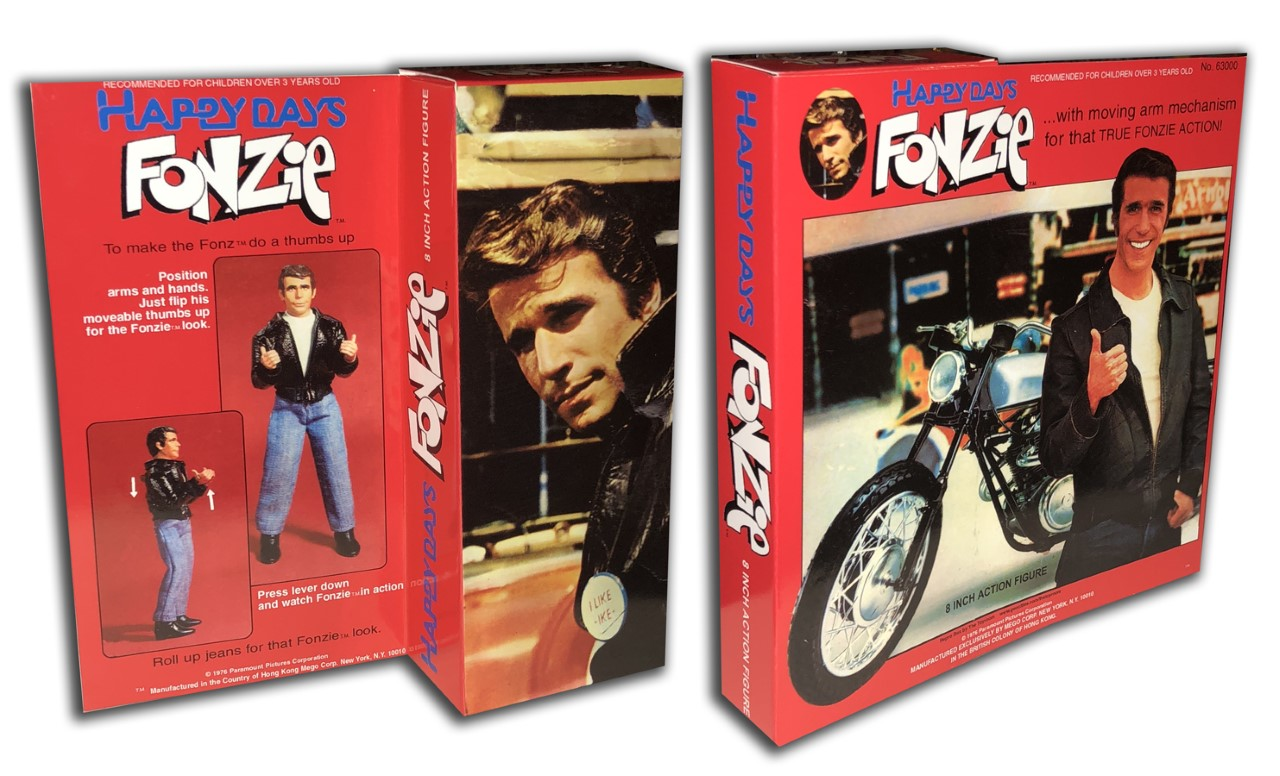 While the other figures were all carded, Fonzie was the only one that also got a boxed version. However by 1978, the show had dropped to No. 4 and Mego dropped the line. Aaawww!

Evel Knievel Funny Car (Ideal, 1976) Before he jumped the shark, Fonzie jumped (or attempted to jump) 14 garbage cans before crashing unceremoniously into Arnold’s Chicken Stand. Only his pride and knee were hurt. Imagine if he had 433 bone fractures (by 1975) like Evel Knievel!

The original daredevil, Evel Knievel was a master showman. From Pepsi trucks to school buses to Snake River Canyon, there didn’t seem to be anything Evel wouldn’t try to jump. Clad in his red, white and blue, star-spangled Elvis style jumpsuits, Evel was a marketing dream come true. Ideal Toys certainly thought so. 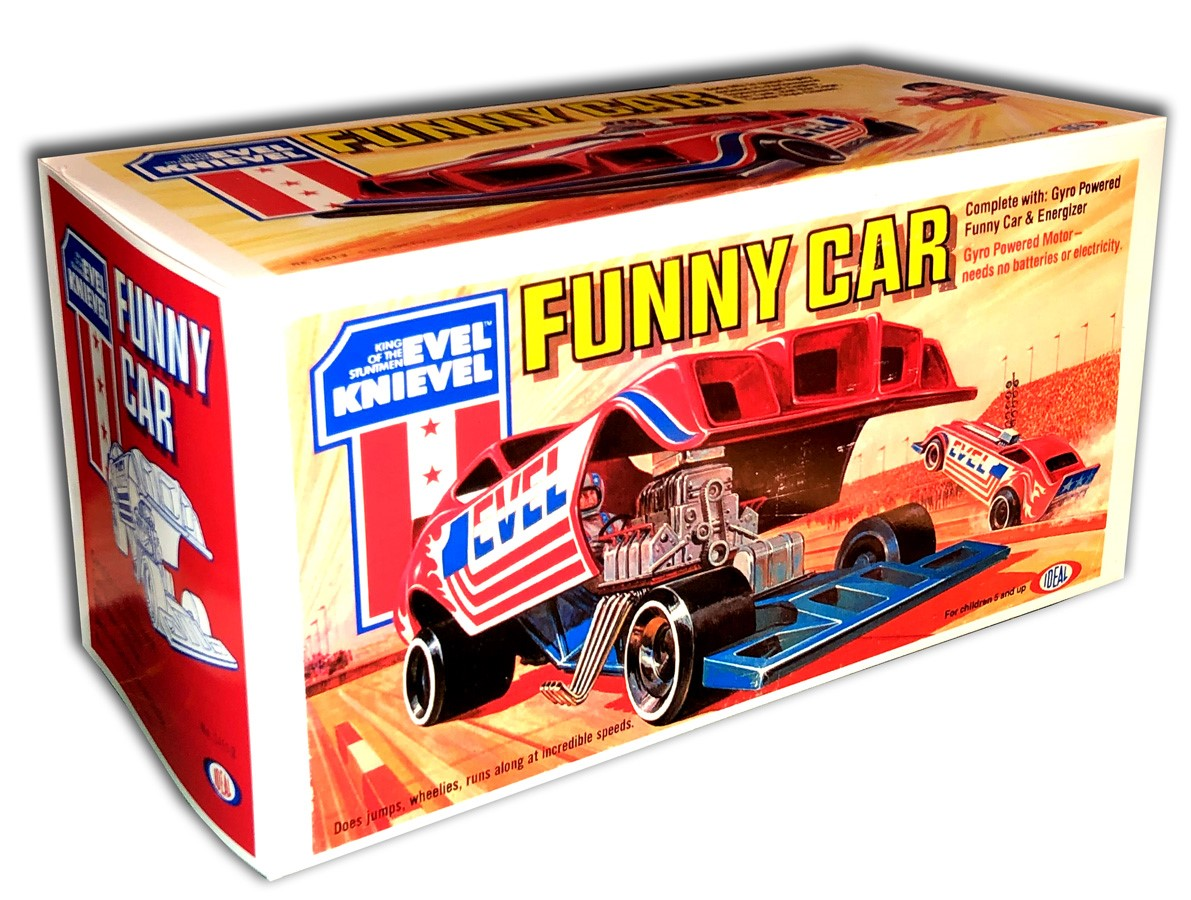 From 1972 to 1977, they released a slew of Evel action figures (bend-em style with a wire skeleton for poseability) and a fleet of vehicles. With the Energizer, you could launch Evel into action in or on his Stunt Cycle, Scramble Van, Dragster, Chopper or Funny Car. Although he was never the biggest action figure in the toy box, no one could ever call him “chicken.”

Kiss (Mego, 1978) You wanted the best…you know the rest. Kiss was the HOTTEST band in 1978 and Mego, ever on the pop-culture bandwagon, jumped on this license. This line of 12-inch action figures featured the original lineup (Gene, Paul, Peter and Ace) in their Love Gun-era costumes. The figures were very detailed in their individual outfits, including their platform boots. No expense was spared by Mego. Except when it came to instruments, which are just printed on the back of the box. Or with the headsculpts. For although Gene and Ace are new heads, Peter (Superman the Movie’s Lex Luthor) and Paul (Captain of “and Tennille” fame) are recycled. Nevertheless, that hasn’t stopped these figures from being enormously popular with Mego and Kiss fans alike. 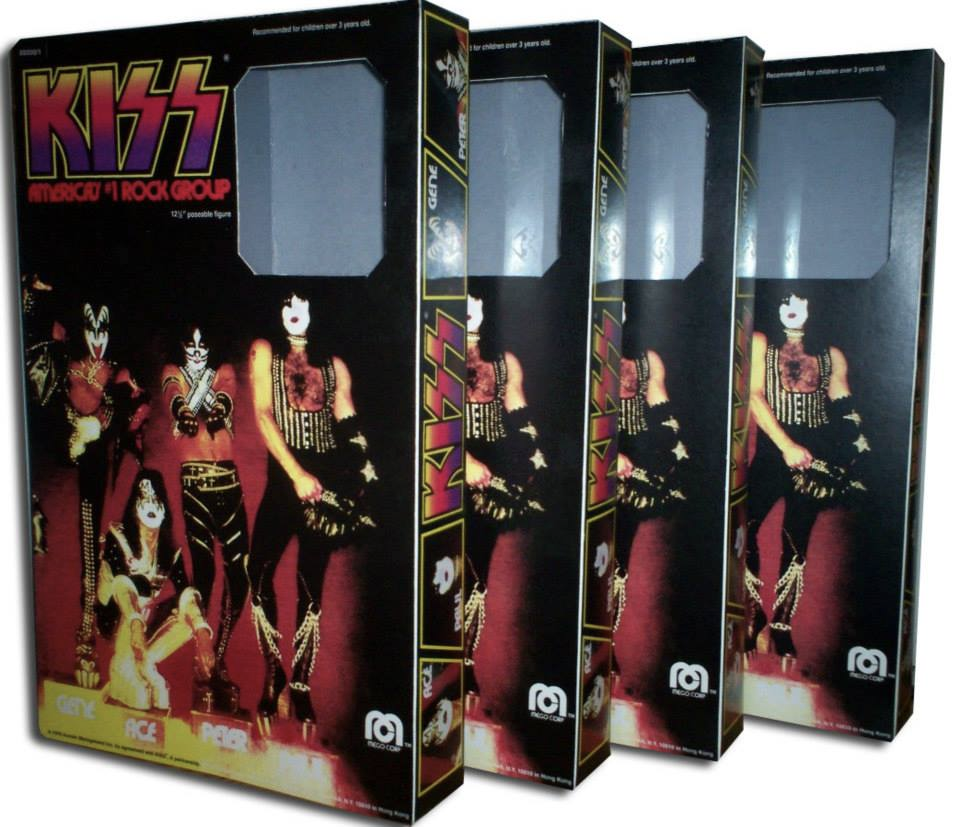 Alien (Kenner, 1979) In space, no one can hear you scream. But in toy stores, this extra-large action figure (measuring a whopping 18 inches) sent kids flying up the aisles in fear. Based on the movie of the same name, Alien had a face only a mother xenomorph could love. The mechanically operated jaws, spring-loaded arms and swinging tail were just bonus features on an already awesome and fearsome figure. 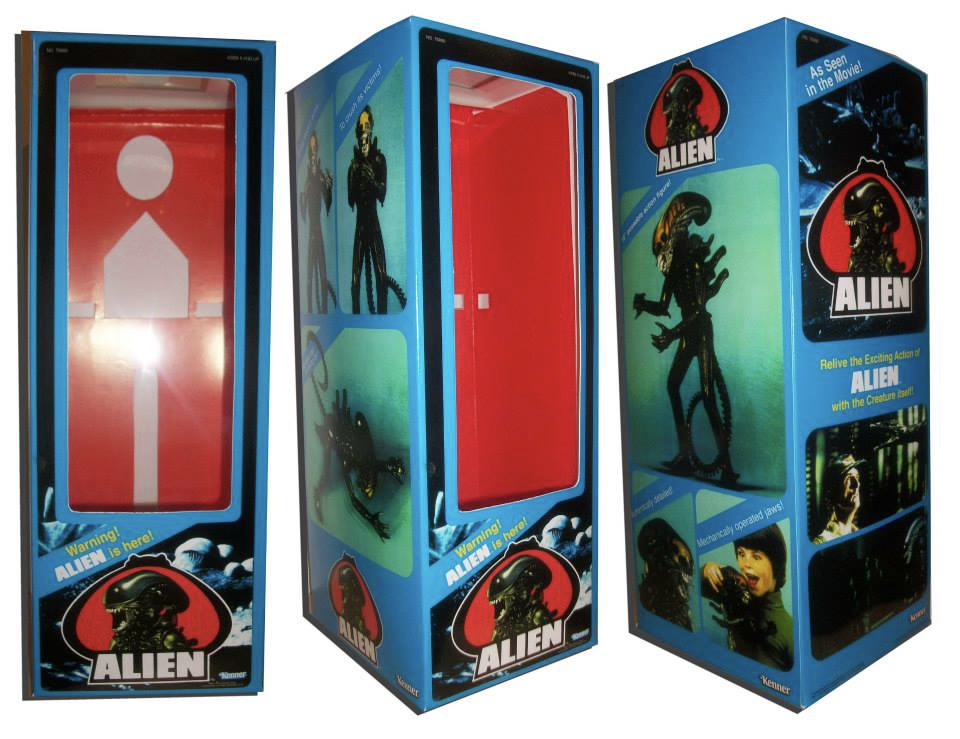 Star Trek Communicators (Mego, 1974) When you say “’70s Space Toys” most people gravitate toward Star Wars. But in the early ’70s, Star Trek was still the granddaddy of them all. The Star Trek license was spread across a variety of companies, such as Remco, AHI and Mego. 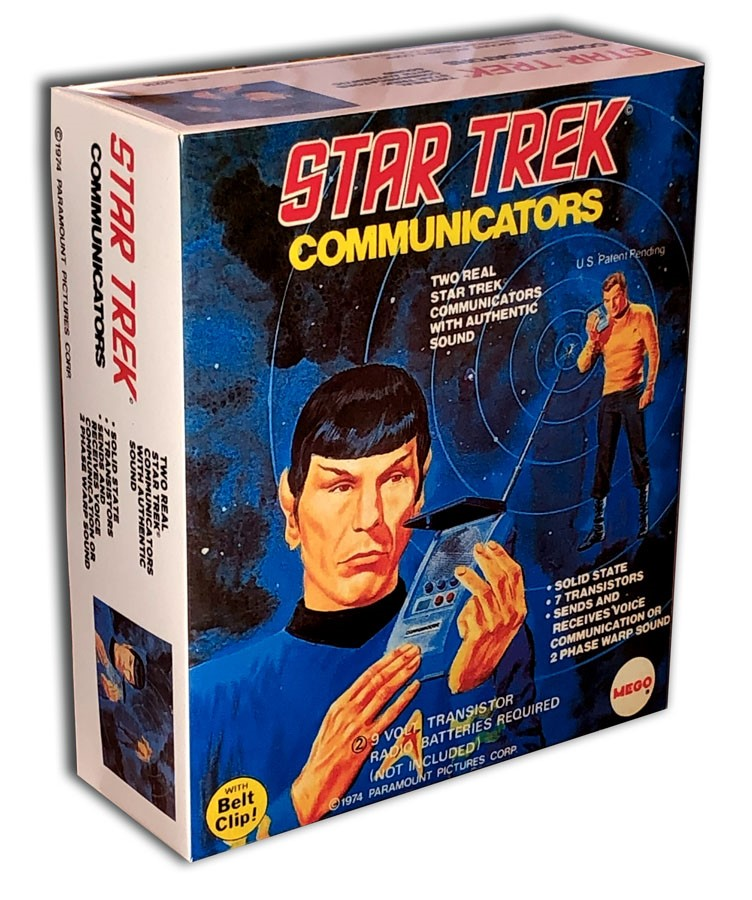 It was Mego that launched a successful line of 8-inch action figures of the crew and aliens in 1974. But they also had lesser success with other items as well. There was the Tricorder (a tape recorder), the Trekulator (a calculator) and the Communicators (walkie-talkies). These were all standard items, but by slapping a Star Trek logo on them and packaging them with such gorgeous box art, it was a license to print money. At least until May 25, 1977.