YOU SHOULD BE READING THIS: Dean Trippe’s ‘Something Terrible’

Home » RANDOM STUFF » YOU SHOULD BE READING THIS: Dean Trippe’s ‘Something Terrible’

Menachem Luchins‘ latest entry in his biweekly column. Read on, because even if you’ve read about Something Terrible, you’ve not read this perspective:

If you’re unfamiliar with Dean Trippe’s modest internet hit Something Terrible, you probably don’t visit many comic book news sites regularly. A shockingly concise and intense autobiographical comic about childhood abuse and its effect on the victim later in life, the comic Trippe has crafted has been covered by pretty much every “major” comic site since it went live about a month ago. A tweet recommending it by Kate Beaton helped the book gain early traction, but I’ve been connected with this particular story and Dean Trippe for quite a while longer.

Back in June, while I was trying to expand our stock while still acclimating to the choppy waters of comic retailing, a picture Dean Trippe drew started making the rounds among my friends on Facebook (Dean has known my brother for years and we share many mutual friends). Soon, some website used it as their page header for a transcript of Wil Wheaton’s “Being a Nerd Is Awesome” speech and the picture spread even more from there. When I approached Dean about it, I found out it was connected to a larger, more formal piece that he was preparing to web publish. 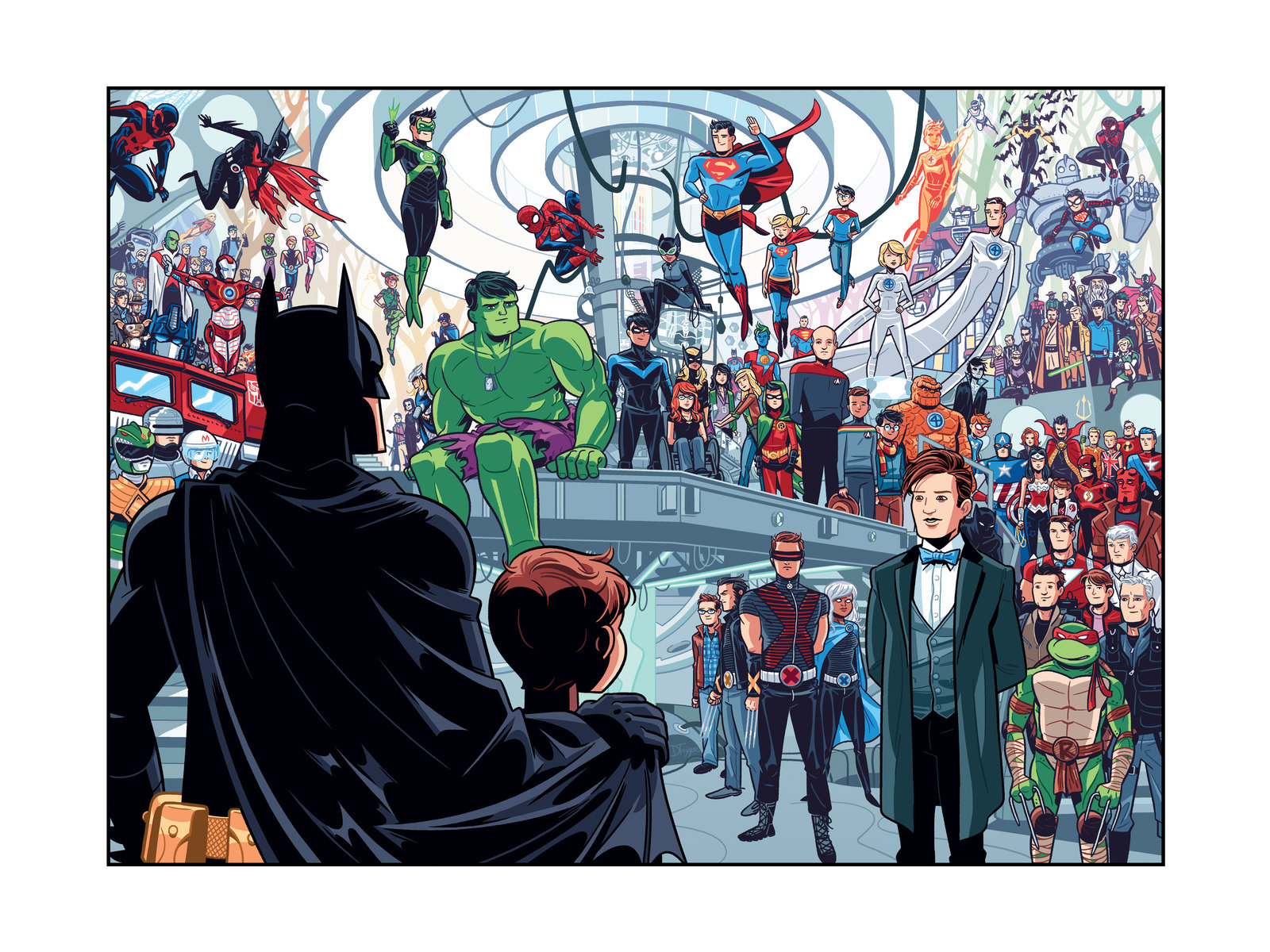 I’ll be honest, I pressured Dean quite mercilessly to let us sell a poster version of the picture. I even went so far as to find cheap printing options for him and vetting some of the companies with Internet searches. He finally relented, though his original plan was to only sell fine art (canvas/archival paper) versions of the piece.

For more than 4 months now, this piece of art has hung in my store and in a second place of honor right by the large front window, framed and spot-lit. Many a 12-year-old, college student, and proud nerd papa have purchased it and countless people of all races, colors and sexes have studied it in detail whispering names to others or themselves.

So imagine my surprise when I reached the end of Something Terrible, a story that is unflinching, raw, powerful and, at it’s core, about the redemptive and therapeutic power of comic book superheroes, and there’s the picture — THAT PICTURE. And suddenly it clicked; this isn’t just a sweet picture of pop culture, it’s not a game: These demi-gods, Rangers, wizard, aliens, detectives, geniuses, demons, mutants and Jedi are more than childhood memories or signs of arrested development. For Dean Trippe, and many others who have suffered silently, they are saviors.

The power of escapist literature has been expounded upon by many and comics and superheroes are no exception — from Jonathan Lethem to the underground comixers of yore, there are numerous examples of people looking at how comics have helped society or eased an individual’s pain. What Trippe has accomplished with Something Terrible, though, is a tale that is at once intensely personal yet surprisingly universal. Clocking in at only 18 pages (minus the afterword) the comic can be read in a handful of minutes but will stay with you for weeks, if not forever.

Who would like this book: Readers of Chris Ware and Dan Clowes. Watchers of finely crafted documentaries about struggling with trauma and, well … frankly, everyone. I have yet to come across a reader who hasn’t appreciated this gem.

Something Terrible is published daily a few panels at a time or can be purchased in its entirety (highly recommended) for 99 cents.