The co-writer of IDW‘s adaptation of Harlan Ellison’s The City on the Edge of Forever: The Original Teleplay — Issue #4 is out 9/24 — beams in with some insight on working on the story — and gives us a list of the Original Series’ strangest eps! 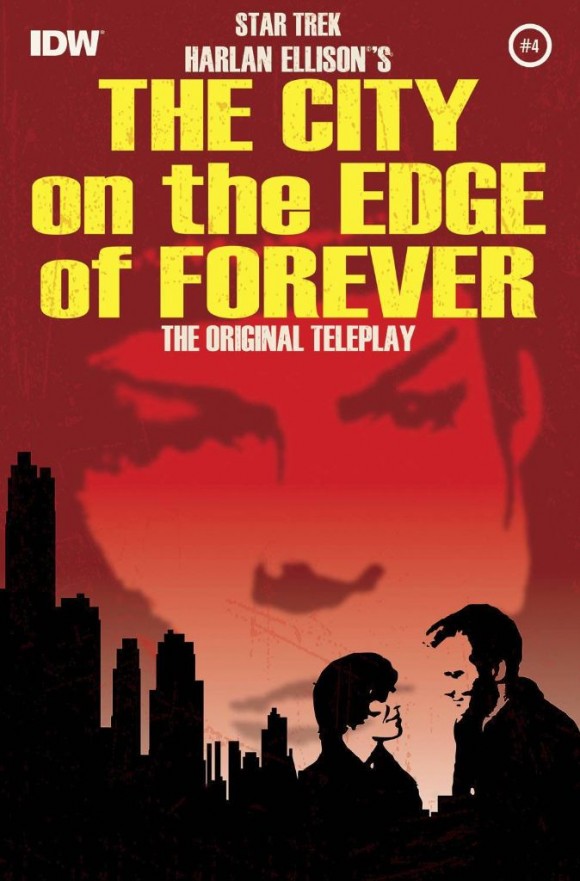 I have been enjoying greatly what IDW‘s been doing with Ellison’s original version of the beloved episode. It’s been executed terrifically by writers Scott and David Tipton and artist J.K. Woodward, with marvelous covers by 13th Dimension fave Juan Ortiz and glorious variant covers by Paul Shipper.

The penultimate issue is out this week and Scott, who, as owner of Blastoff Comics in North Hollywood, Calif., is also a member of our illustrious HOT PICKS crew, tells us his thoughts on working on the project.

BUT THAT’S NOT ALL!

I also convinced him, given how sublime City on the Edge of Forever is, to go in the other direction and give us a list of the weirdest Star Trek episodes ever. 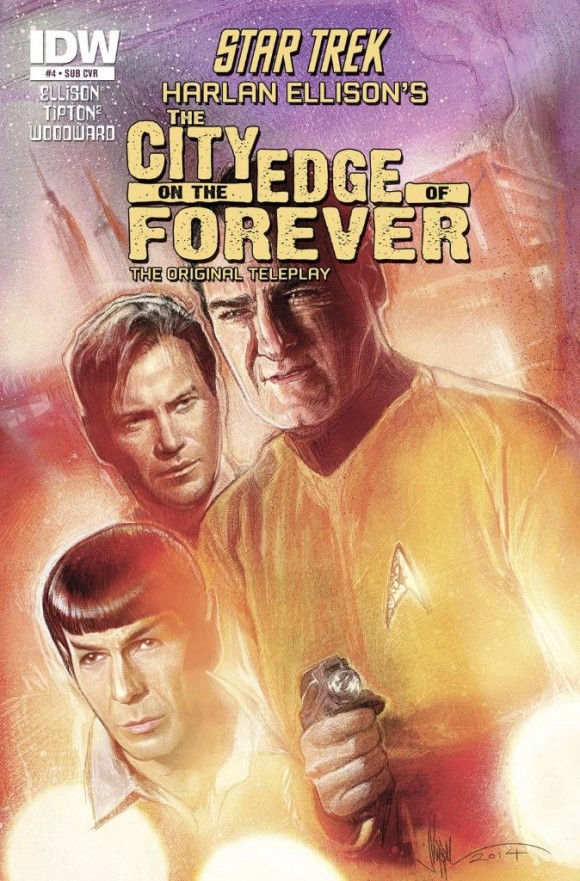 Dan Greenfield: So now Jim and Edith have met and we’re really deep into the story. Tell us how strange it was re-doing (but not, at the same time) a story that is such a famous part of Star Trek lore.

Scott Tipton: You’d think it would be intimidating, and under normal circumstances it would be, but in this case, it really wasn’t. From Day One of this project, our goal was always very simple: We are just the vessel for Harlan’s vision. There’s no ego here, no personal investment, except for this: to create the best possible version of this story as originally conceived by Harlan Ellison. With that in mind, every decision we make is a simple one: Does it serve Harlan’s story? To be completely honest, unlike every other project, I’m really writing this for an audience of one: Harlan. And if he’s happy, I’m happy.

Million-dollar question: Which version do you prefer?

Yeah, I can’t answer that. Even before I got this job, I couldn’t have answered that. The broadcast episode is the one I watched over and over as a kid. It’s the one I fell in love with, the one that made Kirk (and even Spock) seem more real, more human, than any other episode. The humor, the portal version of the Guardian, I love everything about it. But from the first time I read Harlan’s teleplay years ago, it really struck me, not only the addition of characters like the mercenary Beckwith and the noble WWI vet Trooper, but also the difference in James Kirk and what he was willing to do for love – just the ineffable Harlan-ness of it. I can’t say one is better than the other. Each is by itself a precious a little jewel, and I’m trying to do them both justice if I can.

And now, we reverse course on the bridge of the U.S.S. 13th Dimension, with:

Says Scott: “Bear in mind, though I poke some fun here, Classic Star Trek is like pizza: even bad pizza is still pizza. There’s stuff worth watching in every episode.”

Catspaw. This Halloween episode from Star Trek’s second season has its charms, especially Antoinette Bower as the “witch” Sylvia and the scene of Enterprise voodoo, but it just gets goofier as the story goes on, culminating in the reveal of some aliens that were so clearly operated by marionette you could even see the strings if you were watching on a Zenith TV back in 1975, much less on hi-def Blu-ray today. 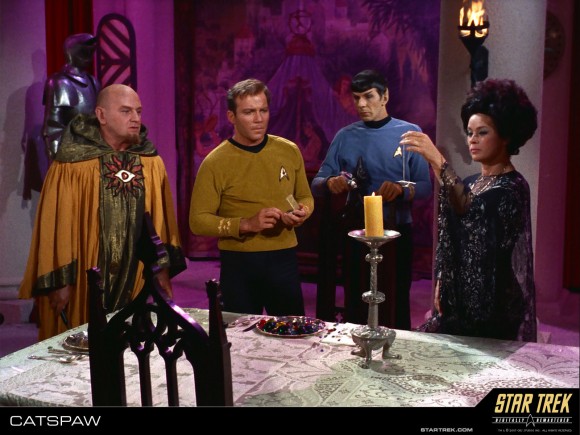 Spock’s Brain. Aliens steal Spock’s brain to use as the central computer for their dying world, and McCoy hooks up a Game Boy to operate his brainless body wirelessly while they go looking for his brain. That has to be against the Hippocratic Oath, right? 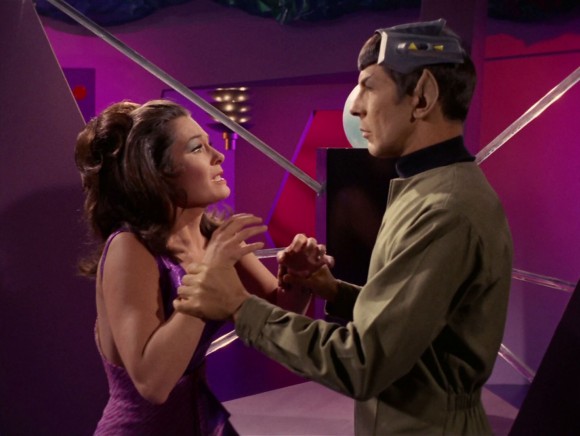 Spectre of the Gun. Kirk, Spock, Scotty, McCoy and Chekov are sentenced to die in a trippy recreation of the famous shootout at the O.K. Corral. Why the O.K. Corral? I’ve seen this episode dozens of times, and I’m still not sure. 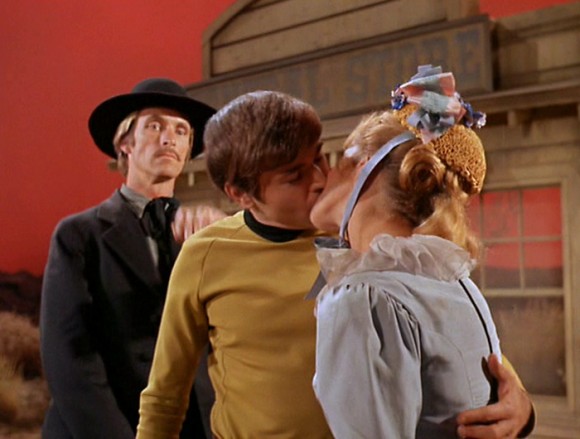 The Way to Eden. Space hippies invade the Enterprise. Yes, you read that right. Space hippies. And there’s a lot of singing. Only the presence of character actor extraordinaire Charles Napier makes this worth watching. 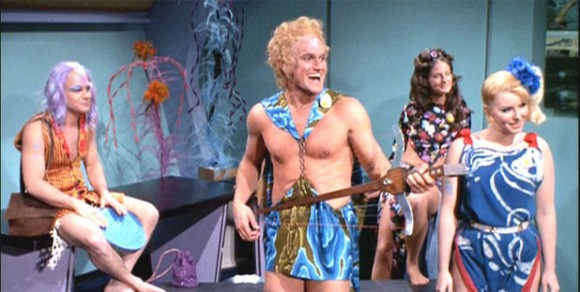 The Savage Curtain. Kirk and Spock fight alongside Abraham Lincoln against some of history’s greatest villains, including Genghis Khan. Why? Because a dude made of rocks said so. Surreal, total insanity, up to and including the scene when President Lincoln takes a spear in the back. 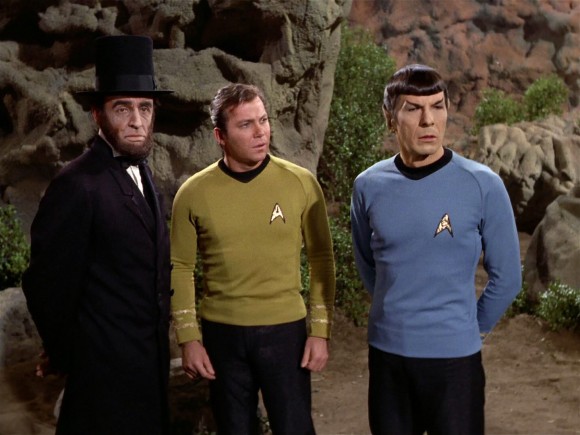 Dammit, Jim! I’m a dead president, not a doctor!