Metal #5 is out this week: Here’s a look at the relationship between the series’ central heroes.

Batman has been center stage in DC’s Metal event by Scott Snyder and Greg Capullo. But a hero who’s been around almost as long — but with considerably less fanfare — is also a prime focal point of the story: Hawkman.

Batman’s partnership with heroes like Superman and Wonder Woman are obviously well-documented. But the Dark Knight and the Winged Wonder have had plenty of moments of their own, too.

So, here’s Hawkmaven Tim Board — he of the wonderful Hawkworld Facebook group and the new Hawkworld blog — with a look back at 13 GREAT BATMAN AND HAWKMAN MOMENTS. — Dan 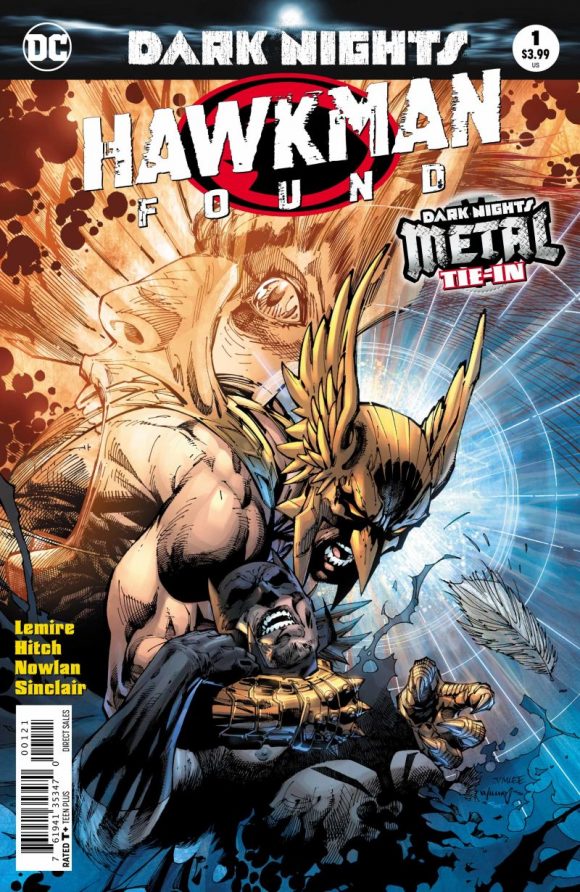 Metal has been a huge event since last summer and only the last two issues remain. (Issue #5 is out 1/31.) The central figure of the event has of course been Batman, but another has been Hawkman. Snyder has brought these two heroes together and given them a connection that we’d never seen before.

Batman and Hawkman appeared right around the same time (Batman in early 1939, Hawkman later that year), and throughout the last eight decades, the two have fought side by side — and even gone up against each other — on many occasions. And they have more in common than you might initially think: Both are head-strong and two of the best fighters in the DC Universe. Now, thanks to their new history, courtesy of Snyder and Capullo, they have a mutual connection that we are just starting to learn about.

There’s likely to be a big showdown of some sort between the two in the last two issues of Metal, but let’s look back at 13 occasions (and then some) when Batman and Hawkman appeared together in the comics, TV or film:

All-Star Comics #7 (Oct./Nov. 1941)/All-Star Comics #36 (Aug./Sept. 1947)
Batman and Hawkman were in an issue together for the first time in All-Star Comics #7. This is the issue where Batman and Superman were made honorary members of the Justice Society. The two heroes are in the last panel, but it is only Batman’s profile. The first time they are seen in action together is in All-Star-Comics #36. There is a scene where Bruce Wayne shows up and tells a doubting Justice Society that he will go get someone to take the place of the Atom, and quickly ducks into an alley and is seen changing into Batman while hoping everyone will accept him. It’s Golden Age gold.

Sheldon Moldoff’s Art. Sheldon Moldoff was THE Hawkman artist of the early ’40s, handling most of his art in Flash Comics until Joe Kubert took up the mantle in 1945. Moldoff would go on to do Batman for many years — and he also did some fantastic art of the two heroes together. 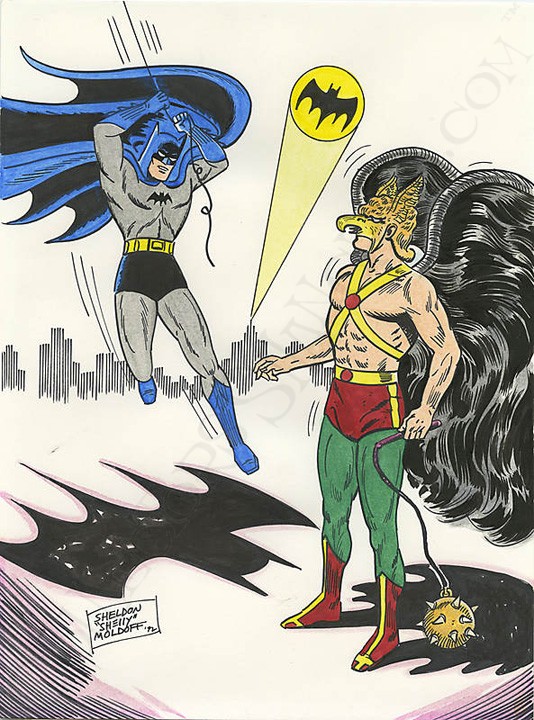 Hawkman’s JLA Debut. Hawkman finally made his debut in Justice League of America #31 (Nov. 1964). During the issue, Green Lantern gave the other heroes hawk wings to fly during a mission — including Batman.

The Brave and the Bold: Issues #70 (Feb./March 1967); #139 (Jan./Feb. 1978); #186 (May 1982). Batman and Hawkman were teamed up several times in The Brave and the Bold series. Perhaps the most famous cover of the issues was Issue #70 by Carmine Infantino and Joe Giella. The two heroes are trying to tear each other’s masks off — but with the way Hawkman has his arm around Batman’s waist, it seems that the Winged Wonder is trying to give Batman a big smooch. (More B&B below.) 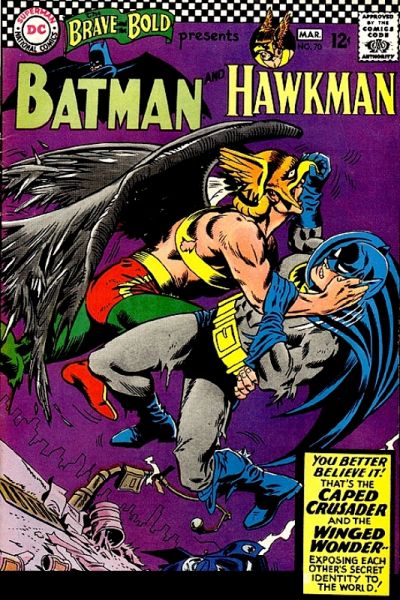 Talking Over Drinks: Detective Comics #467 (Jan./Feb. 1977) During the 1970s, Hawkman had a few backup features in Detective Comics. In one scene, we see the two with their cowl and helmet off, sitting down at a table and discussing a case. Although Batman seems to be drinking coffee, Hawkman gazes at his orange juice, amazed at the “delectable” drink that Thanagar apparently does not have. It’s fun to think of what these two would talk about over drinks. 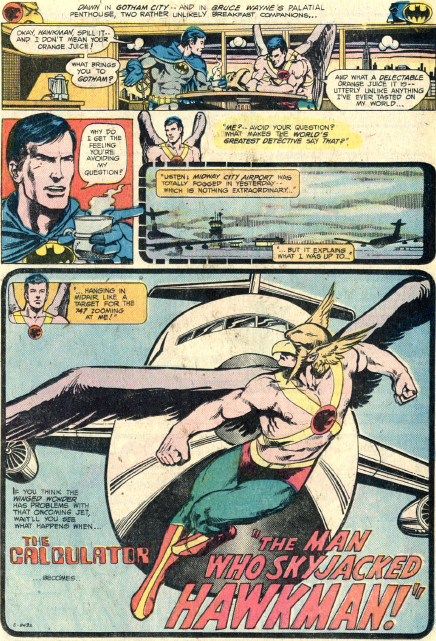 Pencils by the great Marshall Rogers

Batman Battles Hawkman: The Brave and the Bold #164 (July 1980). Batman gets real Hawk wings in this issue but there is a brief tussle between the two heroes. Besides this one scene, the two are very chummy and work well together. 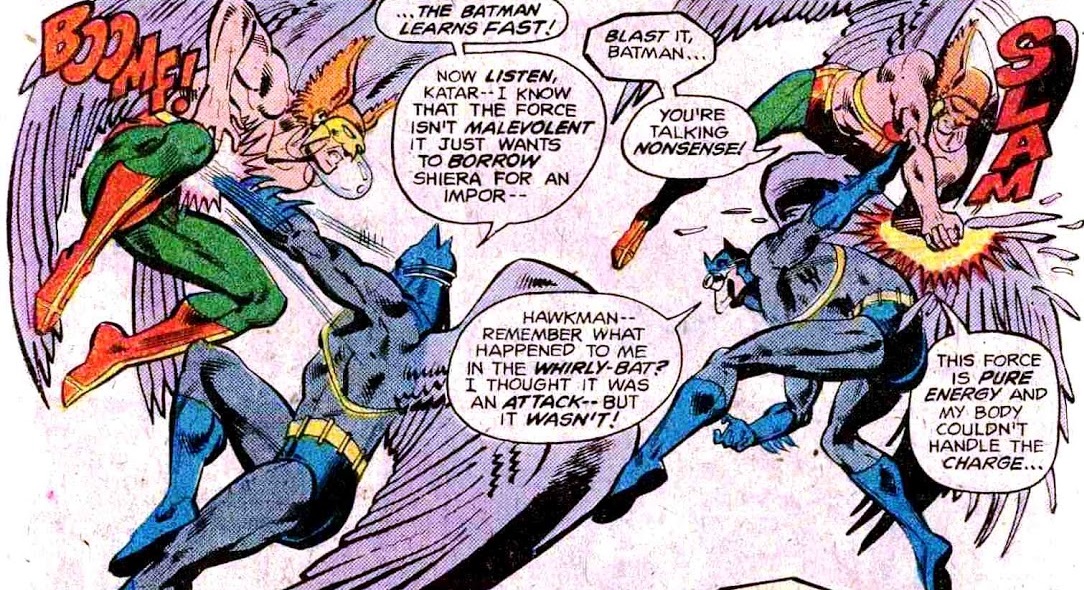 Identity Crisis Aftermath: JLA #116 (Sept. 2005). This confrontation is probably the lowest point of the two heroes’ relationship. Several heroes, including Hawkman, made the decision in Identity Crisis to erase 10 minutes of Batman’s memory. Batman, of course, found out and the whole affair was followed by Infinite Crisis. Fans still debate the right and wrong of it. At any rate, we have two unyielding heroes who strongly hold fast to what they believe and value. An unstoppable force meets an immovable object.

Kubert Art. This is an amazing piece of Batman vs. Hawkman by Andy Kubert (pencils) and Joe Kubert (inks). I’m not sure of the exact date (I’m thinking mid-’00s) but with that mace heading straight for Batman’s head, you wish you could see what happens next. 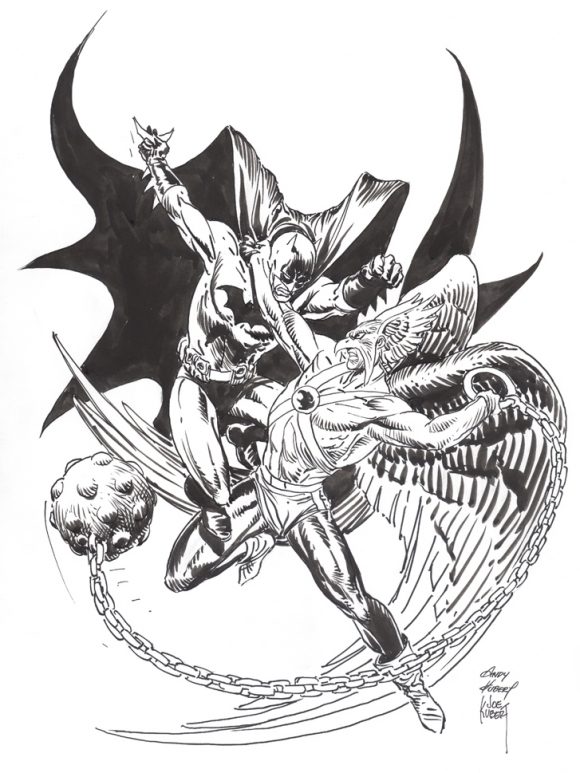 Hawkman Catches the Batmobile: The Batman, Season 5, Ep. 12 (Feb. 16, 2008).
In this episode of the animated The Batman, Batman and Robin plunge off of a cliff in the Batmobile. Hawkman comes to the rescue, easily catching the car and carrying it back up to the road. A great team-up featuring the Shadow Thief, Black Mask and lots of Nth Metal. 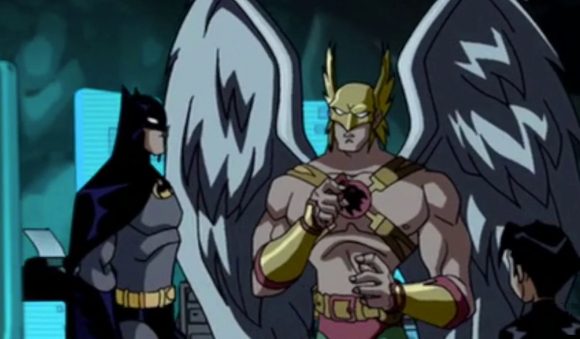 Trinity #7 (July 2008). The Justice League is caught up in a mystery when Hawkman shows up. He uses his knowledge of historical artifacts to help out when Batman suddenly takes over and starts giving orders. That pisses Hawkman off and he tells Batman he’s not his sidekick to be ordered about. Great moment. 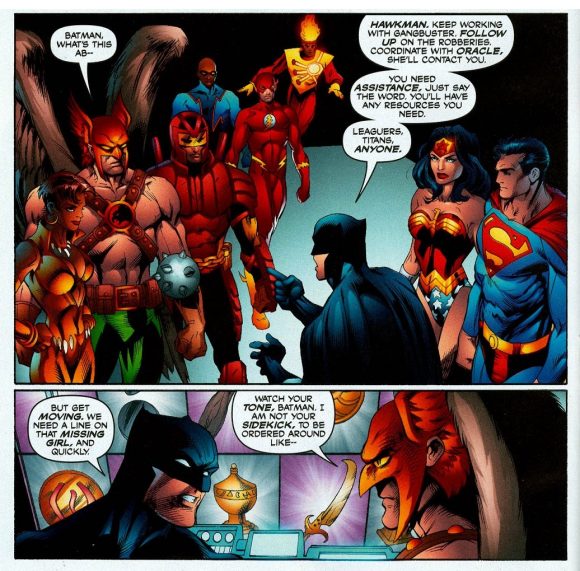 Bromance Glance: DC Super Friends — Joker’s Playhouse (2010). This is from an animated video released in 2010 to promote toys and other merchandise. The Joker takes over the Hall of Justice and when the heroes try to take it back, Hawkman tells everyone they need to work as a team. Hawkman and Batman immediately team up. The look they give each other as they team up… there’s definitely something between these two. 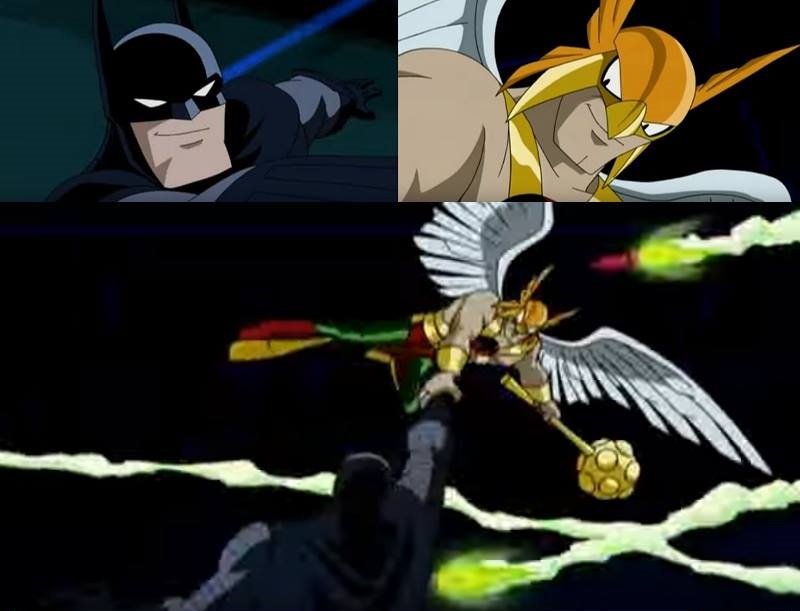 Robin Wants to Fly: Comic strip by Scoot McMahon (scootah91 on DeviantArt, 2014). There have been a few comic strips about Robin getting into trouble when trying to fly like Hawkman. This is one of my favorites. 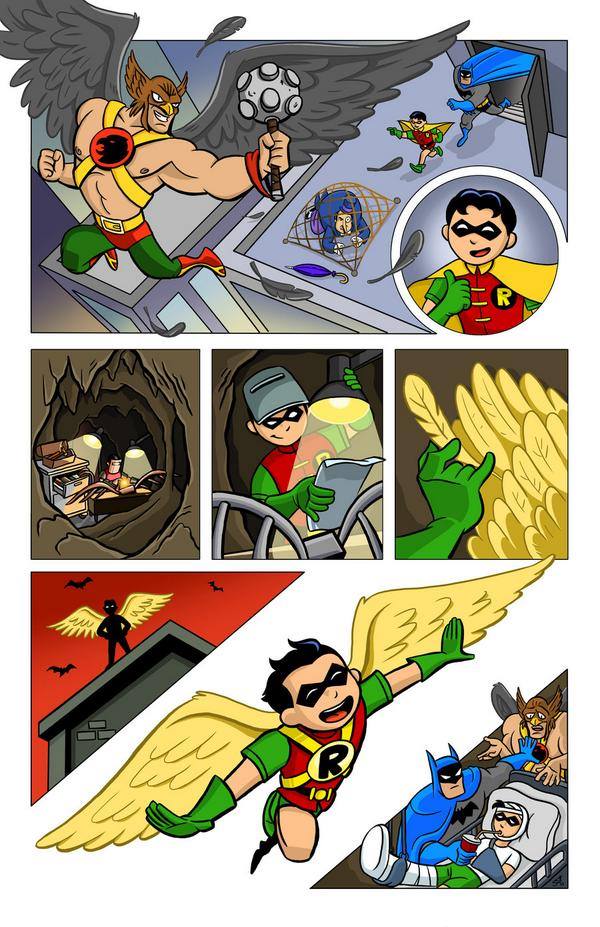 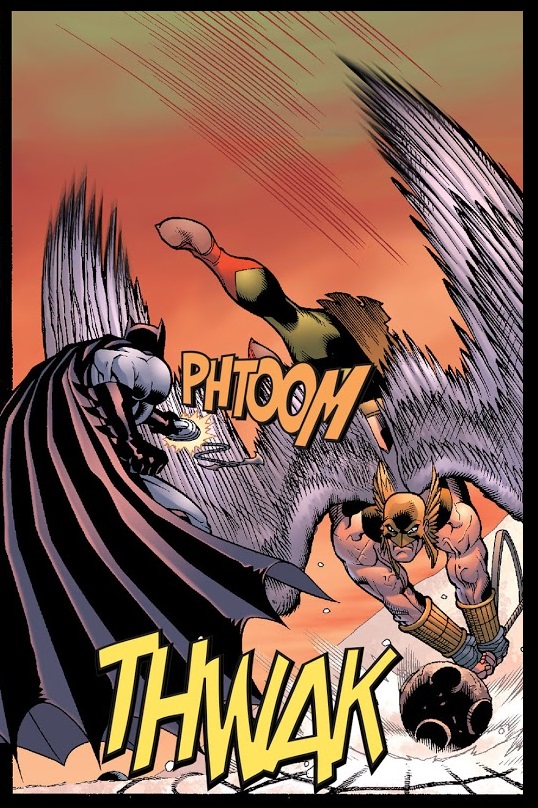 Batman and Hawkman are two of the most iconic characters in comic-book history. With the Metal series reaching its climax, we might get the biggest scene between these two heroes yet!

MORE by TIM BOARD