Why KOR is the Greatest STAR TREK Character Ever

Trek artist J.K. Woodward boldly goes out on a limb — as only a Klingon would…

Every day between now and 9/8 — the 50th anniversary of Star Trek’s debut — we’re counting down our TOP 13 EPISODES. But we’re also bringing you special features like this piece by illustrator J.K. Woodward, an IDW stalwart and one of the top Star Trek artists in the biz.

Just check out this poster, which you can buy here. 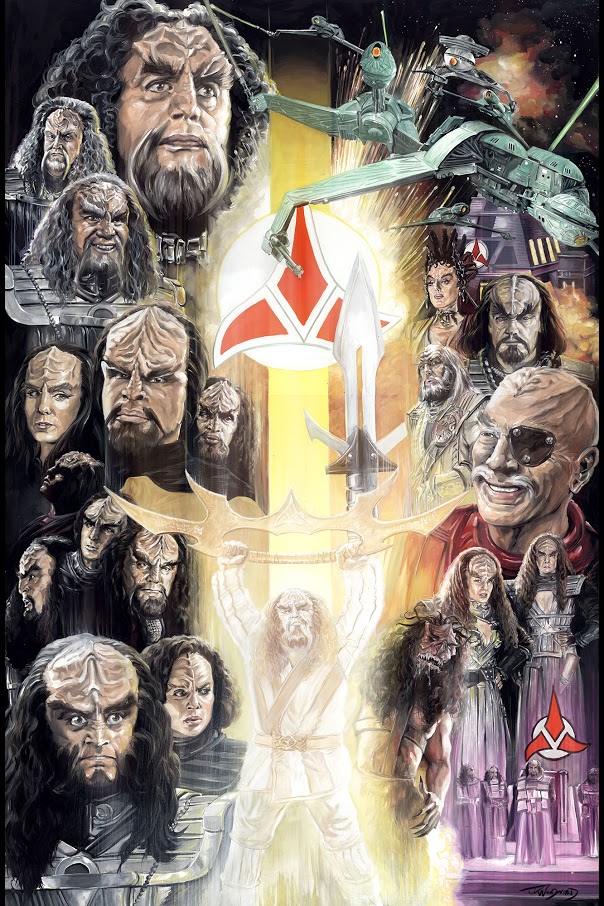 Now, bring on those comments — either here or in whichever social-media thread you found this. We want to hear your thoughts! 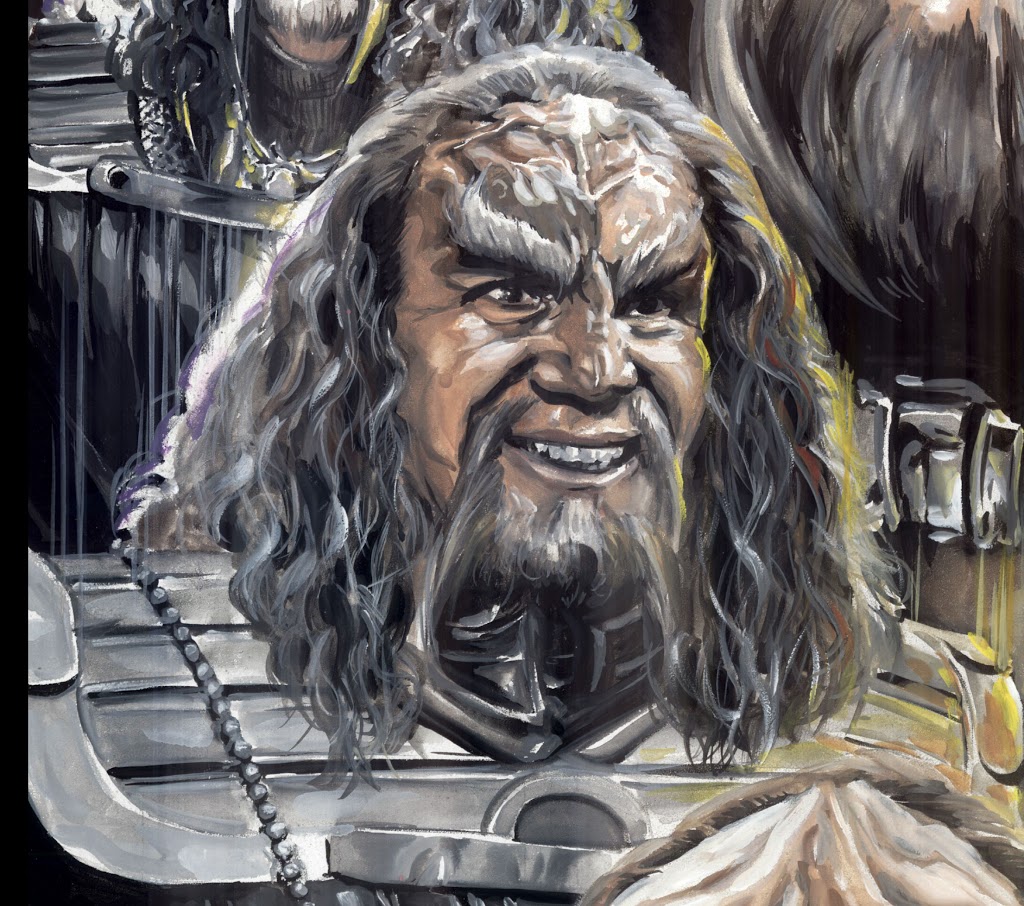 Kor, Son of Rynar, Dahar Master, Descendant of the Klingon Imperial Family and a lesson in contradiction: Self­grandizing until he disarms you with his humility, warm and charming, though we hear tales of his cold and whimsical elitism. More than this, he is the quintessential Klingon during a time when Klingons were nothing more than a pale Cold War analogy.

We would not see anything like him again until Commander Kruge appeared in 1984. Kor is a romantic, fearless in his pursuits and vice, and through it all likes to laugh.

In his debut episode (“Errand of Mercy”) we meet a Klingon who respects his enemy. Kor meets Kirk with admiration instead of hatred, malevolence or anger. He sees this Starfleet captain as a kindred spirit and greets him with, “Well, have we a ram among the sheep?” 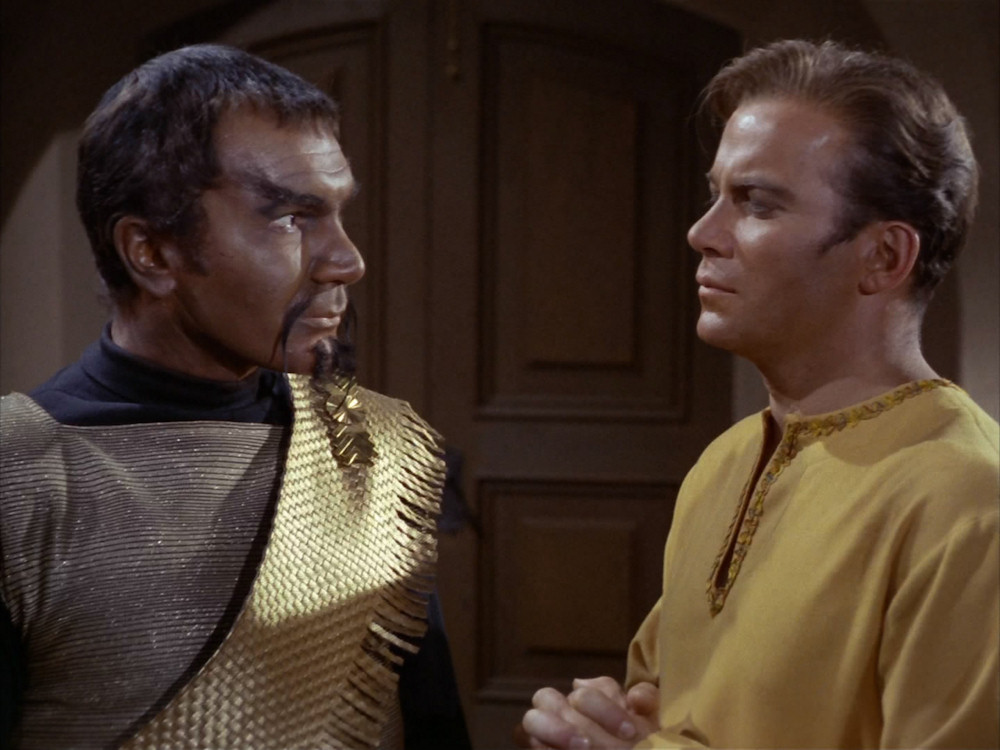 When he’s forced to execute him, he even shows regret by saying, “Always it’s the brave ones who die.” He’s a lustful antagonist who craves battle over killing. The greater his enemy, the more glorious the victory and deaths are just an inevitable result.

We see this continue in his appearances on Deep Space Nine, specifically in Season 4’s, “Sword of Kahless” episode. In the opening scene, Kor tells a story to a roomful of enthralled listeners. He is clearly exaggerating, but it’s a great example of what Kor finds important.

The story is poetic and his aggrandizement is less about ego and more about sharing the passion he feels with the room. He even concedes at one point, “Who gets the credit is not important, what matters is in the end, the mountainside was covered with dead.” Kor romanticizes battle with a contagious fervor and in the end, having almost outlived his usefulness, he dies like he always wanted — as a warrior (DS9: “Once More Unto the Breach.”) 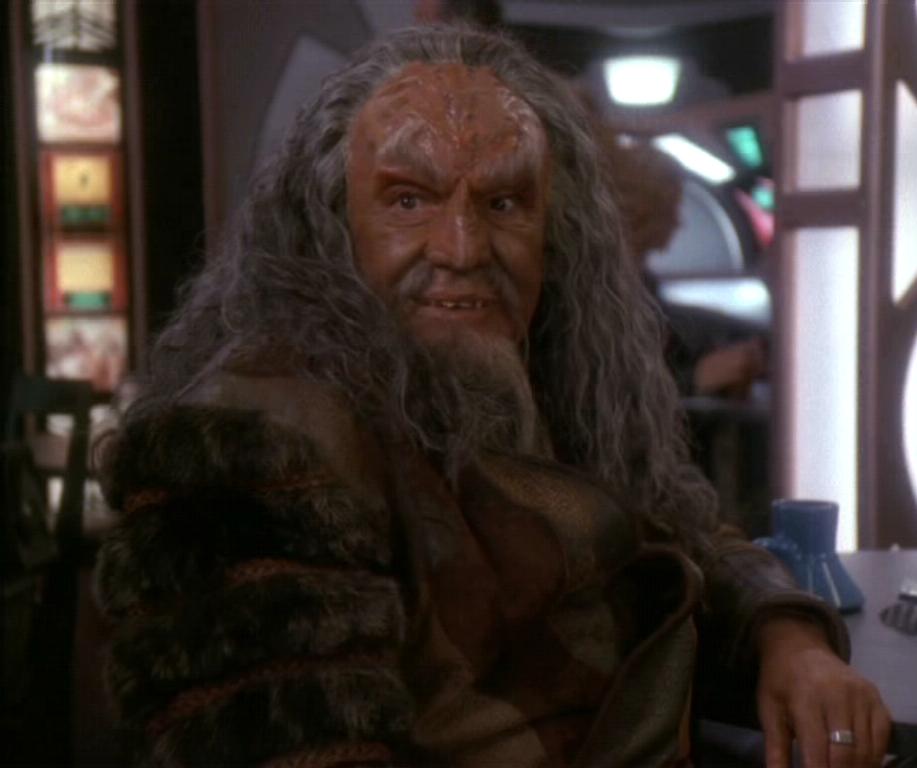 Kor is a proper Klingon and Klingons hold very little back. There are too many examples of Kor’s bold appetites to list them all. In fact, it seems that if Kor doesn’t have a weapon in his hand, he has a drink in it. We hardly get halfway through his first episode before we see him drinking with his enemy. We see it again near the end of the episode when he offers Kirk a drink for a second time: “We can toast the victory of the Klingon fleet.”

His desires aren’t just limited to the bloodwine either. In Deep Space Nine’s “Blood Oath,” we see him with two women on his lap, struggling to reach his drink with both hands occupied. He delivers what I consider my favorite Kor quote: “I need another arm! Or am I doomed to choose between perfection and the palate?” 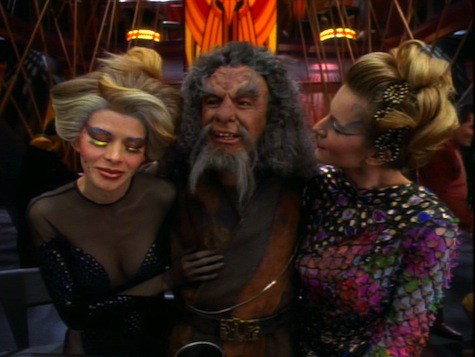 Kor can disarm you with his humor even faster than with a bat’leth. It reflects a thoughtful perception of self as well as a kindess and humility that seems in direct conflict with his natural braggadocio.

A great example of this is in his response to Lt. Commander Dax in Deep Space Nine’s “Blood Oath”: “The only weight I carry now is my own bulbous body.”

There can also be a warmth and affection in his humor as evidenced in his first words with Lt. Commander Worf in Deep Space Nine’s “Sword of Kahless”: “Worf, the traitor, the pariah, the lowest of the low… a pleasure to meet you.” 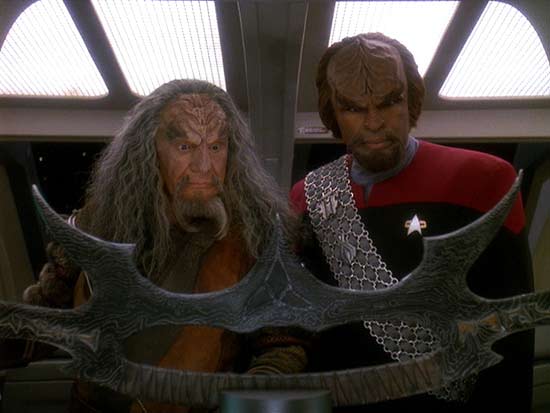 Many credit Christopher Lloyd’s Commander Kruge with defining the Klingon culture, but in my opinion, John Colicos beat him to it with Kor by almost 20 years.

Kor is a romantic soldier, boldly indulgent, an ardent chortler and he died in battle facing an impossible number with unwavering courage and enthusiasm. He admires his enemies and fights with vigor rather than malice.

He is Klingon and I lift my Hlvje’ to him!