It’s the SUPER-STAR HOLIDAY SPECIAL: a series of holiday remembrances by some of the best in the biz — like Kelley Jones, Bill Walko and Corinna Bechko! Click here to check ’em out!

J.K. Woodward is one of the top Star Trek artists working today, and his work is especially familiar to IDW readers. His style recalls the cool-as-hell paperback covers I read years ago. I mean, check out this 50th anniversary tribute: 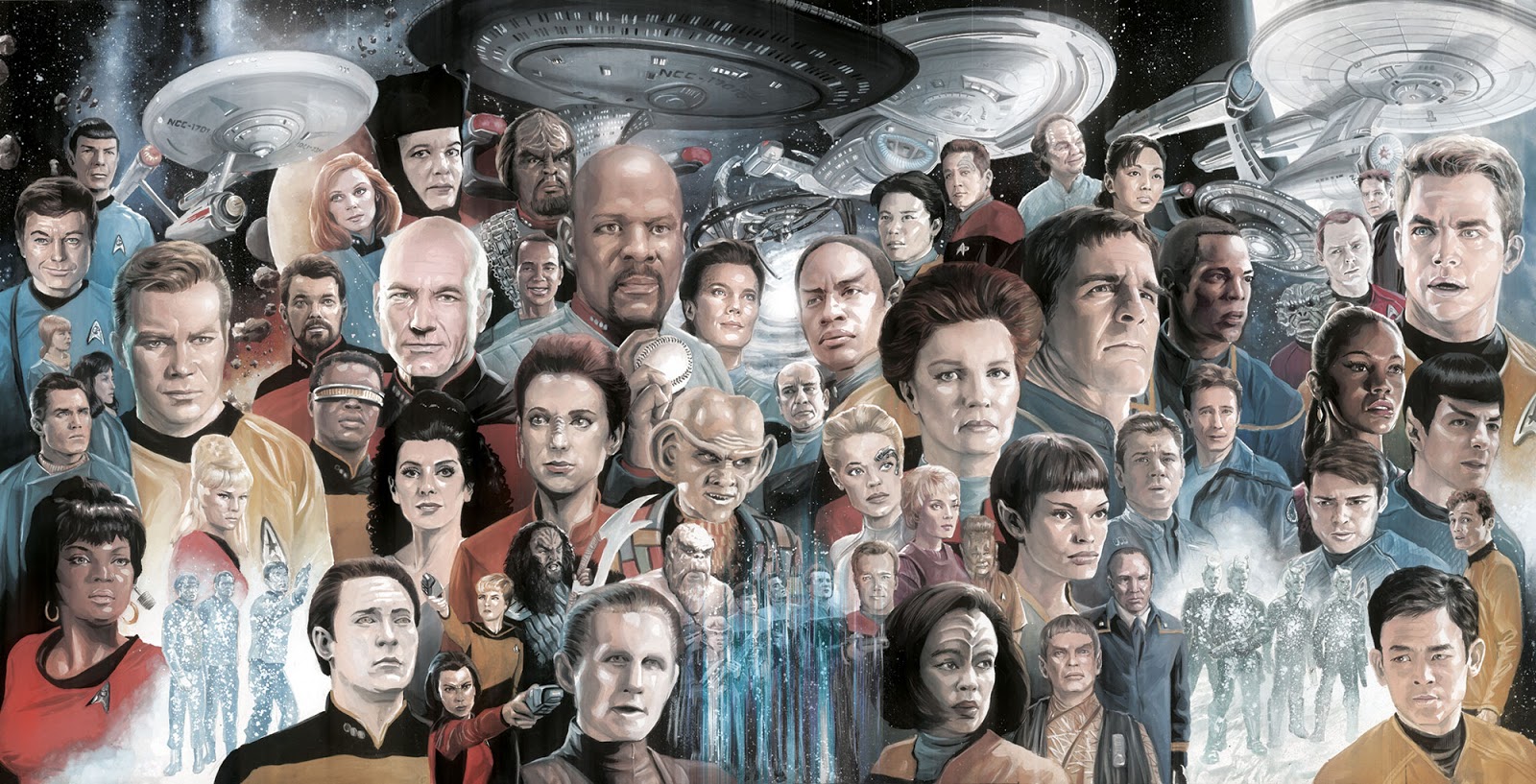 Anyway, dig his SUPER-STAR HOLIDAY SPECIAL entry, which is one of my favorites ever…

1990: I was barely 20 and had moved to Los Angeles from New England and had been there for only four months. In that time I ‘d become neck-deep in debt, alienated all friends, had three women wanting me dead and two who just wanted me to suffer indefinitely from their constant presence.

I was not a nice guy.

I had two jobs and worked up to 16 hours a day and lived with two roommates in a smelly old hotel converted to apartments a block from Hollywood and LaBrea, on a small side street called Sycamore.

The Julie Lee was the name of the building and out of curiosity I looked it up on apartmentratings.com, mostly to see if it was still there. It is and it’s apparently every bit as horrible now as it was then — with a recommendation rating of 33 percent. (The first resident comment states: “Dirty. Cockroach + other bugs infested. Smells awful. Carpets are disgusting. Mold. Totally overpriced. Management enters apartments illegally. Run by uneducated, dishonest, greedy people with a total disrespect for the law. Scroungers.”) 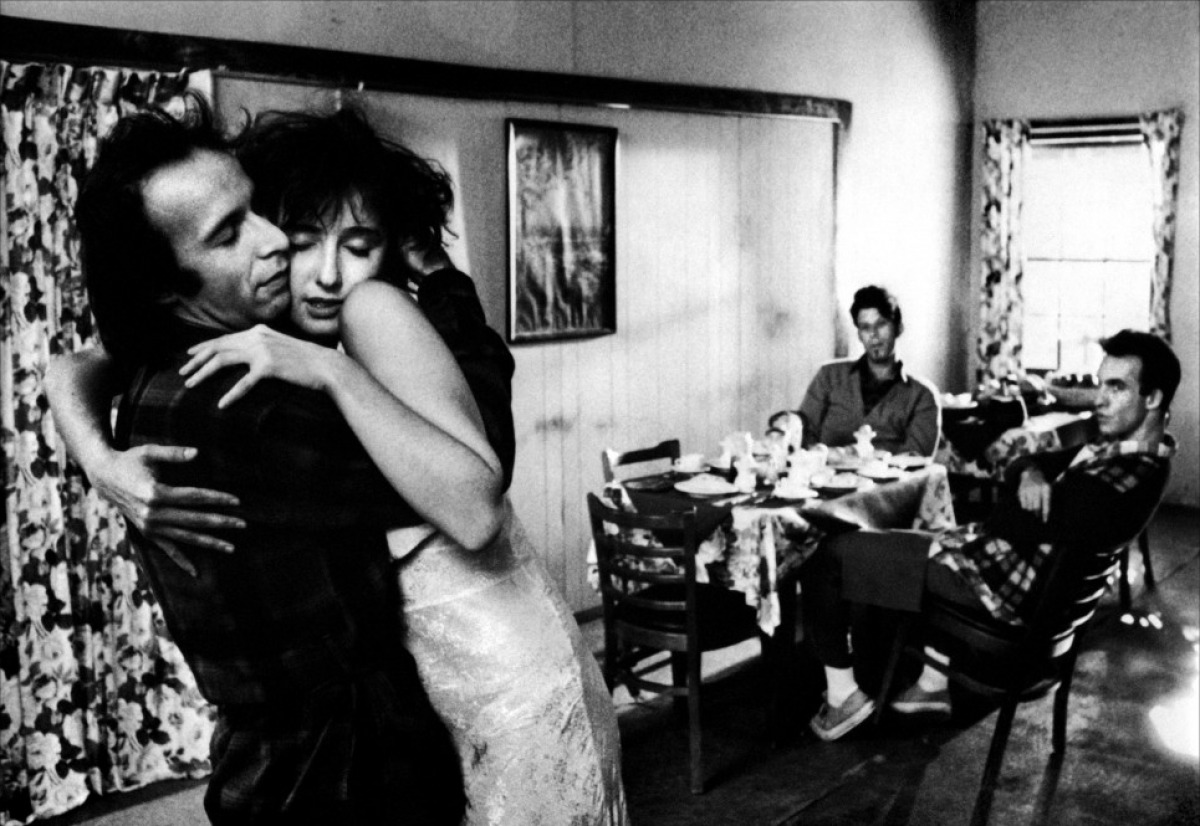 This is pretty much how I picture it. — Dan

At the time, it seemed like the Island of Misfit Toys. It was the place all the people too weird for even Hollywood ended up. I won’t list everyone, but let me introduce you to the cast of characters in this story:

— My roommates Jim and Ben. Jim was a guitarist who’d moved from Oregon and Ben was a native Angeleno, I think, and worked as a grip but I don’t remember for what studio.

— Up on the fourth floor we had Chief. Chief liked motorcycles and alcohol and had absolutely no fear of anything, ever! He seemed to have an almost romantic relationship with the concept of his own demise. Everyone loved him, and the parties were always at his place. He wasn’t secretive exactly, but he just never really informed anybody of anything. Almost like he assumed you knew things without actually telling you anything. He was a bit of a mystery.

— On the bottom floor was Dan. When I first got there, I heard a lot about Dan. He was this nutbag that was getting SSI benefits because … well, no one knew but everyone speculated: There were rumors that he flipped out and killed a guy. He talked to himself. He had several distinct personalities. He suffered from depression, he was epileptic, he was bipolar., etc., etc. I never really found out what the deal was, but I did learn one thing about him: HE HAD AN ENCYCLOPEDIC KNOWLEDGE OF ALL THINGS STAR TREK! 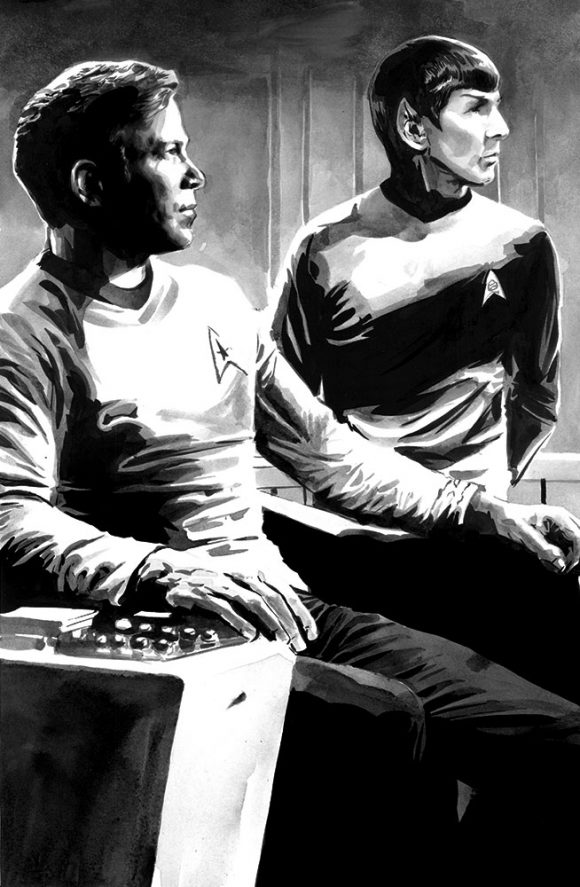 It goes without saying that we would be the best of friends.

These were not good times for me at all. I was broke, in debt, stressed out, my only “friends” were at the Julie Lee because I managed to irritate everyone else. … Well, I pretty much covered that in the first paragraph, but what I haven’t mentioned was that when I wasn’t working, I was drunk or high all the time and the closest thing to connecting with another human being was casual, and sometimes anonymous, sexual encounters. They were usually girls who made the assumption by my appearance that I was in a band. Now bear in mind, even though it’s risky behavior, I was at the right age for this. In and of itself, this “sex, drugs and rock n’ roll” period isn’t really a tragedy. In fact I value this youthful and dangerous time in my life. What was concerning was that I was using this as a method of cutting myself off from everyone and anyone. I’d been doing it for a while and it hadn’t really dawned on me until Christmas made its slow, predatory approach.

Everyone in Hollywood tends to be from somewhere else and they were all going home to be with their families. The Julie Lee was emptying out!! My roommates and Dan were the only others that were in this same predicament. Chief was, as usual, an enigma. We had no idea what his plans were. We never really knew what he was up to.

One of the jobs I was working at the time was in retail sales at Hollywood Toy and Costume. Around Halloween and Christmas, I would get crazy overtime, and on Christmas Eve we stayed open till midnight. It was around 11:55 p.m. when it happened: “I’m doing Christmas!!!” 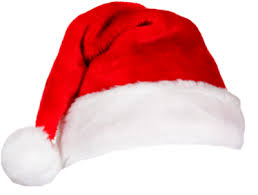 I walked by the action figures and spotted the Teenage Mutant Ninja Turtles figures of the time. These things were the greatest. Remember them?

I flashed back to a weird conversation I’d had about the Turtles with my roommates. It was weird because back then, I wore the “crazy rock n’ roller suit” all the time, not the “Star Trek-watching, comic-reading nerd” suit. I rarely had any of those nerd-culture conversations with anyone but Downstairs Dan. It was also weird because I felt like a human being. I was actually talking and laughing with my roommates instead of keeping my usual creepy distance. I think it was Ben who had brought up the Rat King and Sewer Surfing Mikey during the conversation. 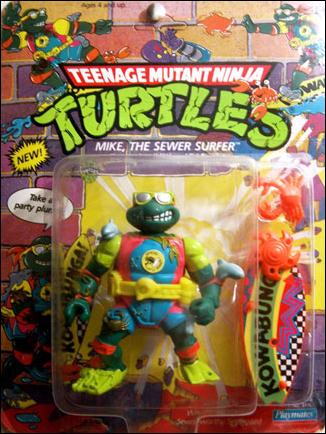 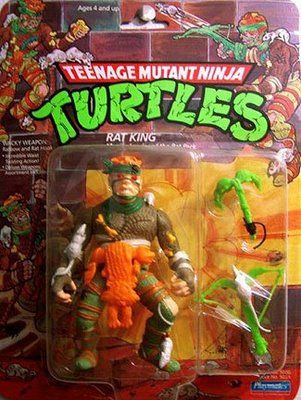 Well, guess what we had in stock at the toy store? I’ll say it again: “I’m doing Christmas!!!”

I got the two action figures for Ben and added a regular Michelangelo and a Donatello action figure with a zillion different plastic weapons for Jim.

I didn’t stop there. I bought Santa hats and Groucho Marx glasses as stocking stuffers. All this was at an employee discount and the owners were nice enough to extend store credit. Being that the cost of this was coming off the next paycheck, I still had some cash in my pocket, and since there is no shortage of liquor stores off Hollywood Boulevard, I stopped in for some malt liquor. Five 40 oz. bottles of St. Ides at a whopping $1.49 each. 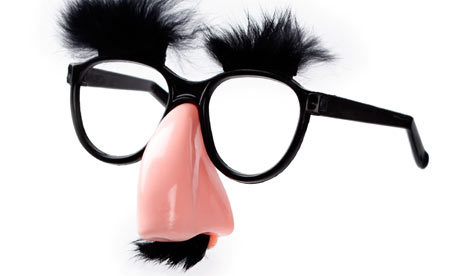 I almost had enough to cover it. I was a nickel short, but the man behind the counter “let it slide till next time.”

I got back to the apartment around 12:30 a.m. I couldn’t wait to watch them try to drink from a 40 oz. bottle with a giant plastic nose in the way.

No one was home!

Only half an hour into Christmas morning and it already let me down.

They were probably out having the time of their lives on Sunset Strip, I figured. It was still early by Hollywood standards. I could be waiting for over 4 hours and the Julie Lee was a ghost town. How pathetic. Why did I let myself get so wrapped up in this? Why didn’t I …

That’s when they walked in, interrupting my private little pity party. They had just run to the corner to grab some smokes. I literally had to wait 3 minutes. A Christmas miracle!! They spotted the malt liquor bottles with the pretty Christmas bows on them first, but I made them start with the stocking stuffers. They weren’t going to drink the Forties without a Santa hat and Groucho glasses.

So there we were, three adults in goofy glasses and Santa hats drinking the cheapest beer loose change could buy like it was champagne from heaven. That’s when I brought out the gifts and it got nuts. We were 12 again, if only for a little while. We drank our horrible beer, smoked some pot and played with Ninja Turtles action figures until the sun came up! 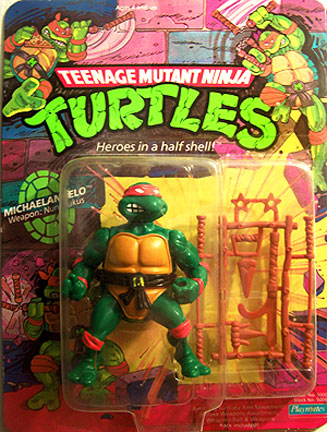 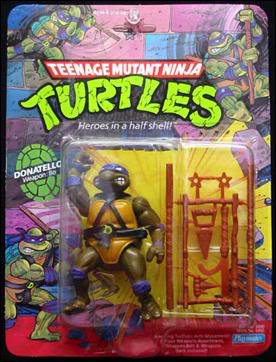 I still had two bottles of malt liquor with the gaudy bows on them, so around 9 a.m., I made my rounds. First, I stopped by Chief’s. Not there. I later found out he had gone back home to New Jersey for the holidays. Told no one. So I left the bottle with the bow in the hallway by his door. (Chief never got that bottle. It was likely gone before I rounded the corner on my way to Downstairs Dan’s. This was the Julie Lee after all.)

I got down to Dan’s and gave him his Forty. He wasn’t much of a drinker — how did I not know that? — and insisted I enjoy it instead. He was at the beginning of a Star Trek movie marathon and invited me to join him. I couldn’t think of a better way to spend a Christmas Day.

He was about half way through The Motion Picture and offered to rewind it, but I was more excited about the upcoming Wrath of Khan. DVDs weren’t a thing back in the early ’90s and we were watching on VHS and I didn’t want to wait to rewind it, to say nothing of actually sitting through it. I’ve since learned to appreciate Star Trek: The Motion Picture much more as I’ve grown older and wiser. 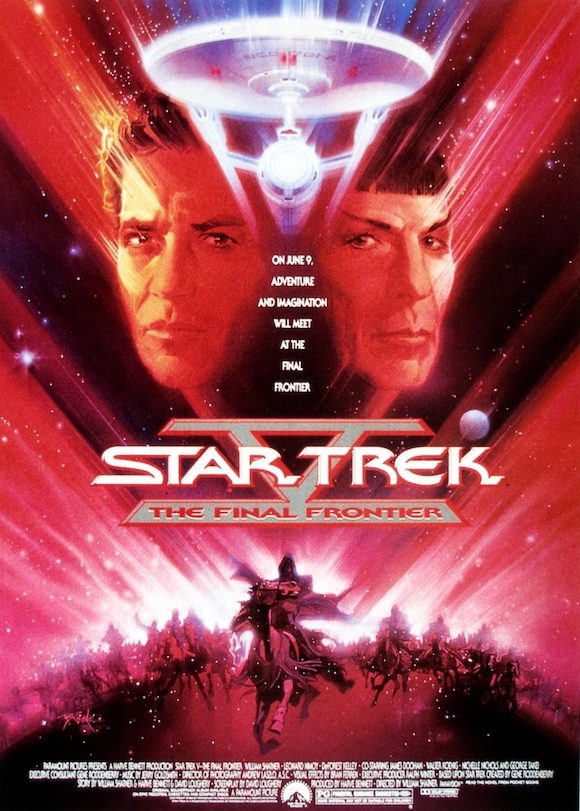 I remember when we got to Star Trek V: The Final Frontier, and we were at the scene with Kirk’s brilliant “I need my pain” monologue. Dan made the astute observation that Kirk had learned that lesson years ago in the Original Series episode, The Enemy Within. He believed it was the writer’s intention to make Kirk more aware than the others because of this experience. Man, this guy was great to watch Trek with!

We ended on that movie, since at the time it was the last Trek film. Star Trek V: The Final Frontier has always been among my favorites. I have taken endless abuse about that since it’s not really a fan favorite. But I got something about that movie on that Christmas Day. It was about family, connecting. Kirk, and to a lesser extent, Spock and McCoy, realized something by the end of the movie and it changed who they were. They learned that they were only as alienated as they chose to be. At the beginning, they took shore leave together and spoke of how they had no family, over shots of bourbon. 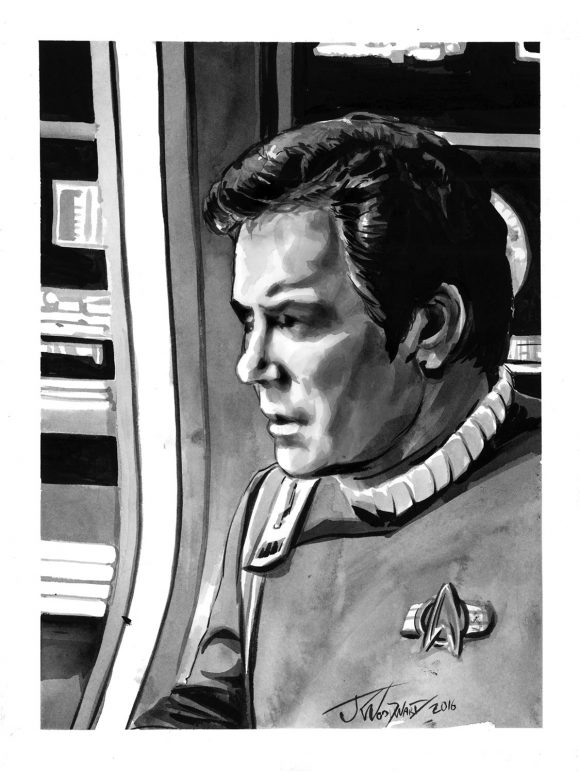 Kirk, even in this setting, put distance between himself and his friends throughout the movie. In the end, he realized he had family all along and embraced this connection he had with his crewmates.

I’d love to be able to say that I changed from that Christmas, that I looked at life differently and approached my relationships differently, that I grew up, but everything went back to “normal” the very next day and I would be on this lost weekend for at least five more years.

But even today, when I notice that distance between family, friends and me, I think of Ninja Turtle action figures and make the phone call. I think of Kirk’s journey in Final Frontier and I make the time for people where I can.

Though that Christmas turned out to be only a respite and not the big change at the time, it had its permanent impact. 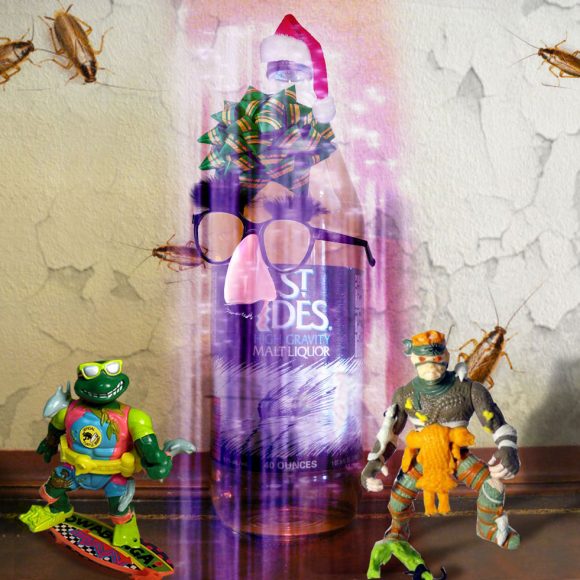 MORE: Check out J.K. Woodward’s Why Kor is the Greatest Star Trek Character Ever, here.