When THE FALCON First Took Up CAPTAIN AMERICA’s Shield

An INSIDE LOOK at a compelling 1970 entry in Marvel lore… 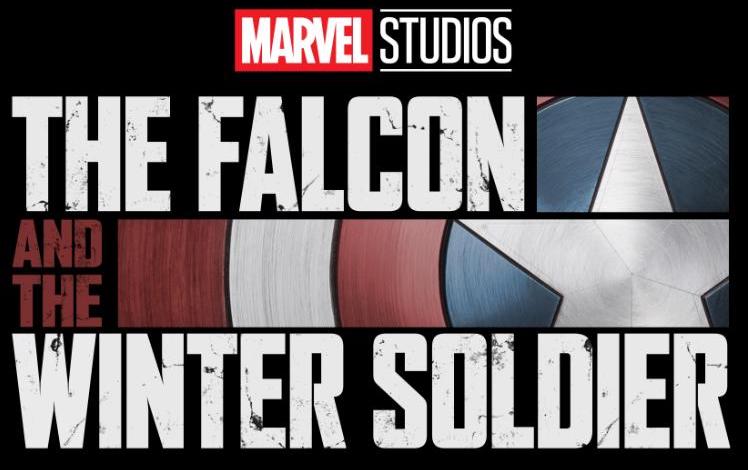 The Falcon and the Winter Soldier debuts Friday on Disney+, a series long on subtext and — as per typical Marvel — short on advance details. What we know is obvious: Captain America’s two former partners — Sam Wilson (Anthony Mackie) and Bucky Barnes (Sebastian Stan) — have to team up against Baron Zemo (Daniel Bruhl) with the shadow of the retired Star-Spangled Avenger looming over everything.

Of all the MCU Disney+ shows, this is the one I’ve been looking forward to the most, given that it appears to take many of its cues from Captain America: The Winter Soldier, the best solo film of the entire enterprise.

One of the big questions is whether the Falcon will ultimately take up Cap’s mantle since Steve Rogers gave him his shield at the finish of Avengers: Endgame.

In the comics, of course, Wilson has been Cap already. And so has Bucky/Winter Soldier, for that matter. (And John Walker’s Captain, played by Wyatt Russell, will be a part of the show as well.)

But to find the first time the Falcon donned the red, white and blue, you have to go allllllll the way back to 1970 and Captain America #126, when Sam Wilson briefly wore Steve Rogers’ outfit as an escape ruse. 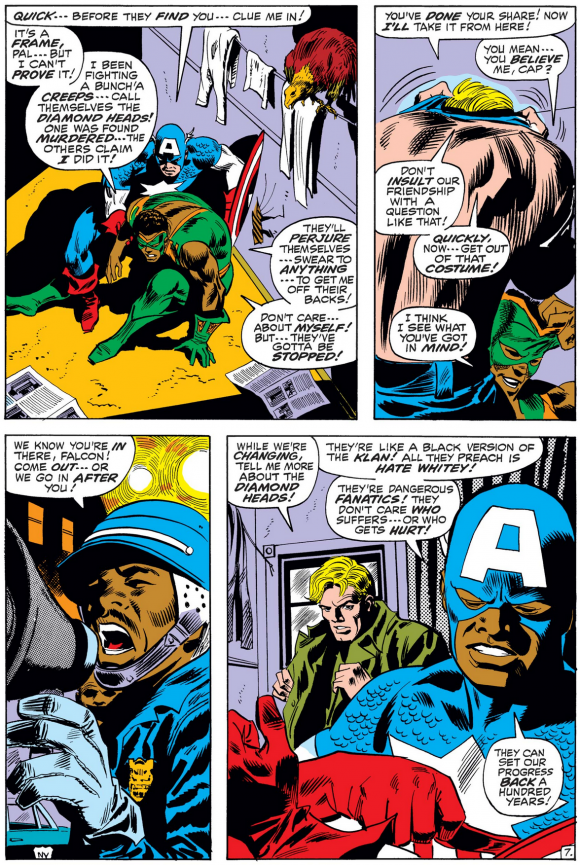 The issue itself is featured in the expanded edition of TwoMorrows’ Marvel Comics in the ’70s, by Pierre Comtois, a “field guide” that highlights some of the most important Marvel comics of the decade. The volume is due to be released March 24 — and you can click here for more info. (Such timing!) 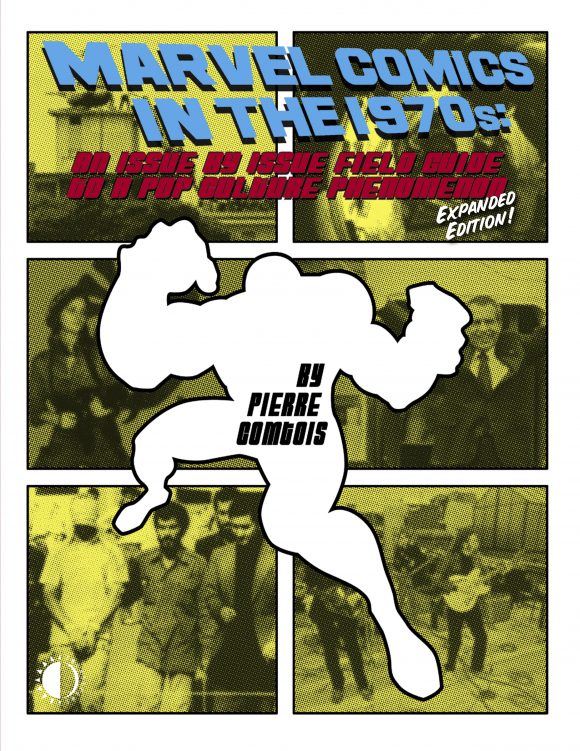 Meanwhile, check out this EXCLUSIVE EXCERPT:

Kirby’s back! No, wait… Readers who first laid eyes on the cover of Captain America #126 (June 1970) couldn’t be blamed if for a fleeting moment they thought that the King had returned to his signature creation. Unfortunately, he came back just to do the cover, which was done in prime late Jack Kirby kinetics. Inked by Golden Age contemporary Bill Everett, the heavy brushwork was reminiscent of Chic Stone’s work over Kirby during the years of consolidation. 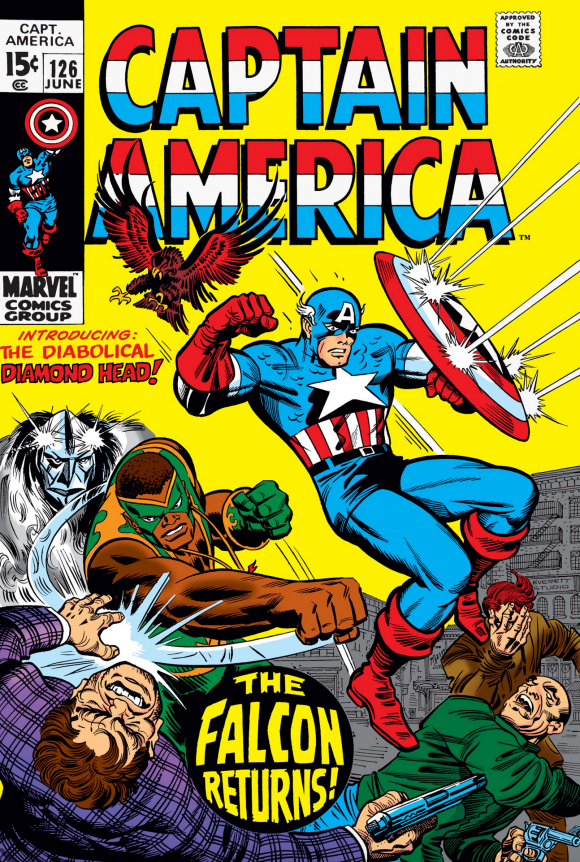 Little did most readers realize, however, this issue’s cover would mark Kirby’s swan song on Captain America, as in a scant few months, he would depart the hallowed halls of Marvel to seek his fortune at rival DC. Sure, he’d be back in another five years or so, but by then, the magic had mostly dissipated.

Never again would he match the great work he’d done on the character throughout his Marvel career. Anyway, the unfortunate part was only relative as the insides were still being drawn by Gene Colan in his own prime. And if there’s any doubt about that, check out page 10 for a full-page portrait of Diamond Head in all his villainous glory! 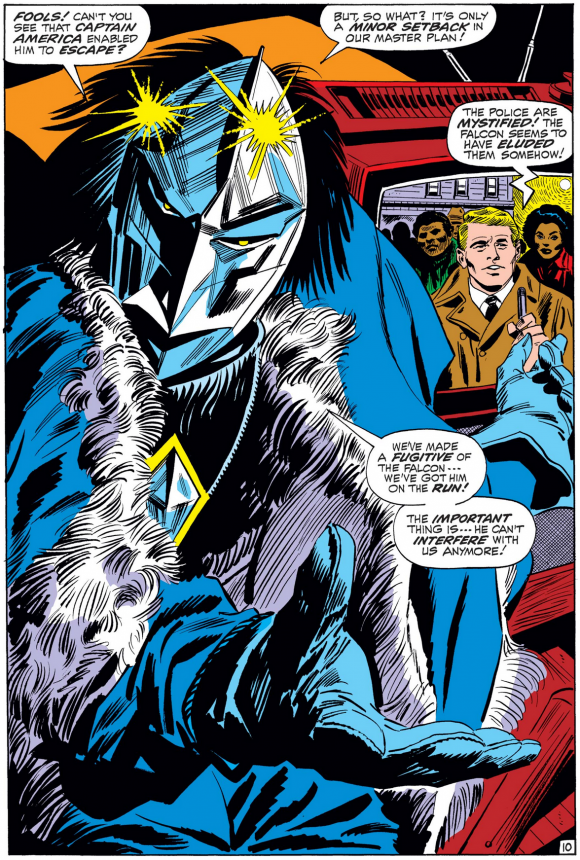 As good as Colan was on most anything he chose to draw, he was always best at street-level stories of the kind Daredevil, and later, the Black Widow, were usually involved in. Thus, this issue’s story by scripter Stan Lee was right up his alley as Cap goes to Harlem to check in on how the Falcon was doing since their defeat of the Red Skull a few issues back.

Turns out the Falcon (aka Sam Wilson) wasn’t doing so hot. Holed up in a building by the police, it seems he’d been framed by local gang lord and race hustler Diamond Head, who’s been trying to force out all non-black businesses so he can control all of the neighborhood’s crime income. Offering to help his friend prove his innocence, Cap helps him escape capture by the police, and eventually the two track down Diamond Head to a local warehouse. There, the villain is defeated and when revealed, turns out to be a white man in the employ of the Maggia, an international crime cartel who used racial tensions to get a foothold in Harlem. 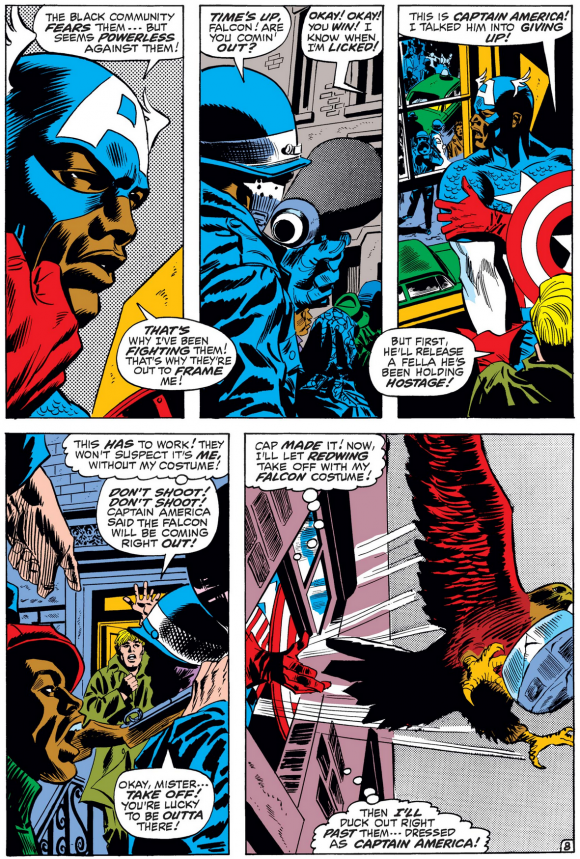 This was another in a string of single-issue stories by Stan Lee following a deliberate policy of ending the use of continued stories in response to reader complaints. The policy didn’t last too long, but did manage to show how sometimes, stories could be short- changed with only 20 pages to play with.

An interesting note here is that this issue also places the Falcon in an environment that would become familiar in later issues, after he was promoted to co-star in the Captain America feature, even sharing its logo. As a social worker, Wilson would spend his time in the inner city, getting caught up in its human dramas, a set-up for Cap that would prove to be one of Lee’s greatest story inspirations… and sadly, one that he’d fail to exploit completely.

Fun Fact: This issue’s plot would be used again in Issue #143. There, the masked rabble rouser would turn out to be none other than the Red Skull. That one was scripted by Gary Friedrich, but might editor Stan Lee have had input on the big reveal?

Marvel Comics in the 1970s is a 240-page, black-and-white paperback. It lists for $29.95 and you can get it through your comics shop, various booksellers or directly from TwoMorrows. (Click here.)