INSIDE LOOK: Marvel launched its oversized editions in amazing fashion… 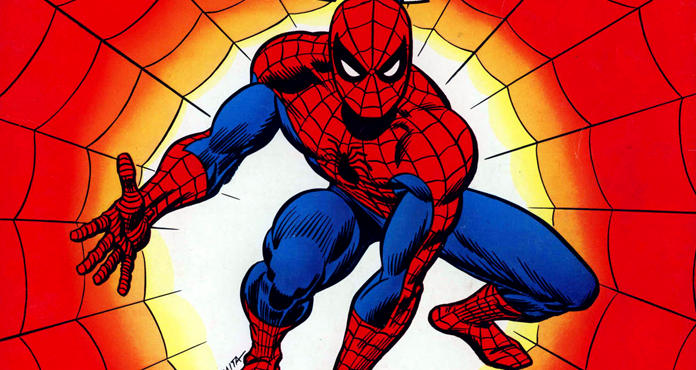 UPDATED 3/25/20: We’ve got treasury editions on the brain this week. Why? Because DC plans to release the classic Superman vs. Wonder Woman treasury as a hardcover Facsimile Edition. (Click here for the details.) And that bit of news led me to ask treasury maven Rob Kelly to put together THE TOP 13 TREASURY EDITIONS THAT NEED TO BE RE-RELEASED — RANKED. (You can click here for that grooviness.) That, of course, got me thinking of some of my all-time fave treasuries. This is one of them. So dig this piece from July 2017’s SPIDER-MAN WEEK, by Rob himself. — Dan

Marvel Treasury Edition #1: The Spectacular Spider-Man is the greatest Spidey collection ever. I don’t even think it’s close. But rather than write it up myself for SPIDER-MAN WEEK, I invited 13th Dimension contributor Rob Kelly to tale a crack at it. That’s because Rob hosts my favorite podcast right now: TreasuryCast, which chronicles and critiques treasury editions from all publishers, past and present. Rob even recently dedicated an ep to this issue. Click here to listen. You’ll dig it. — Dan 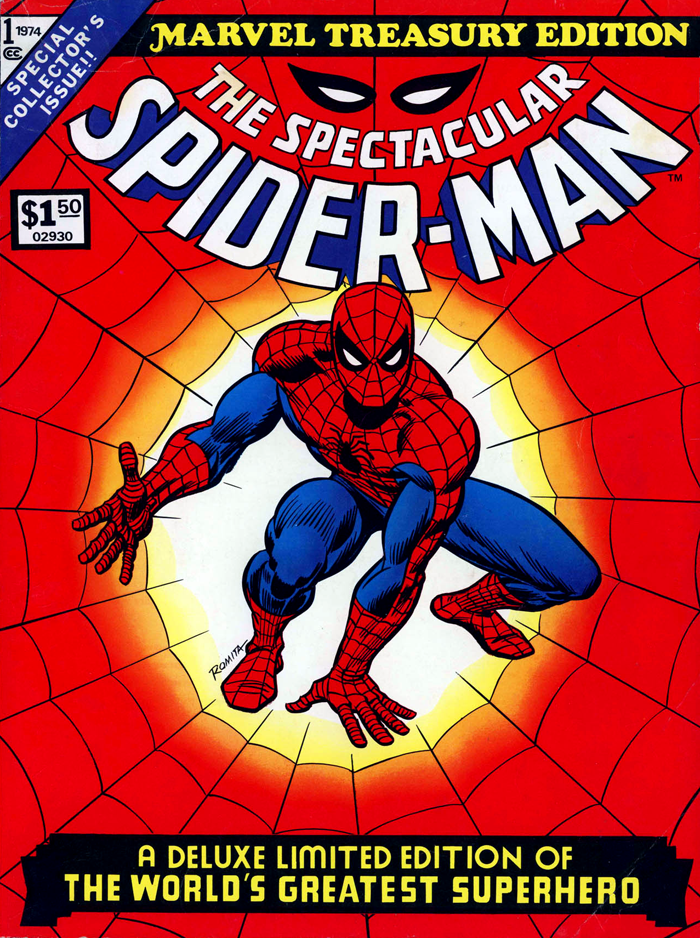 After years of ebbing sales, the major comics publishers of the 1970s were trying everything they could to shake things up: extended page counts, more sophisticated printing techniques, black-and-white magazines and, of course, treasury editions.

DC got into the treasury game first in 1973 with a one-off Rudolph the Red Nosed Reindeer collection, quickly followed by the first official issue of Limited Collectors’ Edition (confusingly numbered C-21), which featured Shazam!/Captain Marvel. Subsequent releases starred Tarzan, the House of Mystery, and Rudolph again. For its part, Marvel waited until 1974 before publishing treasury editions, but when they did, they hit the ground running (or, more accurately, swinging). 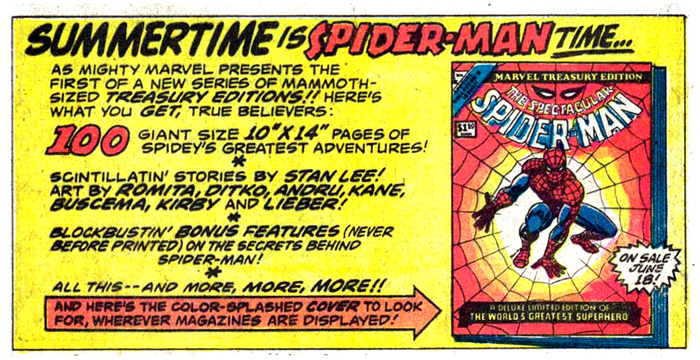 Marvel Treasury Edition #1: The Sensational Spider-Man appeared June 18, 1974, right at the start of summer. Kids were out of school, and awaiting them on local newsstands was a gorgeous John Romita cover of Spidey in an iconic pose, surrounded by the brightest red imaginable. Sure, at $1.50, it was about six times what an average comic book cost, but how could any kid turn this down?

After an intro by Stan Lee and a beautiful table of contents featuring a collage of all the significant people from Spidey’s life, we’re greeted by a two-page Daily Bugle spread, humorously detailing all that we’re about to see in the book. 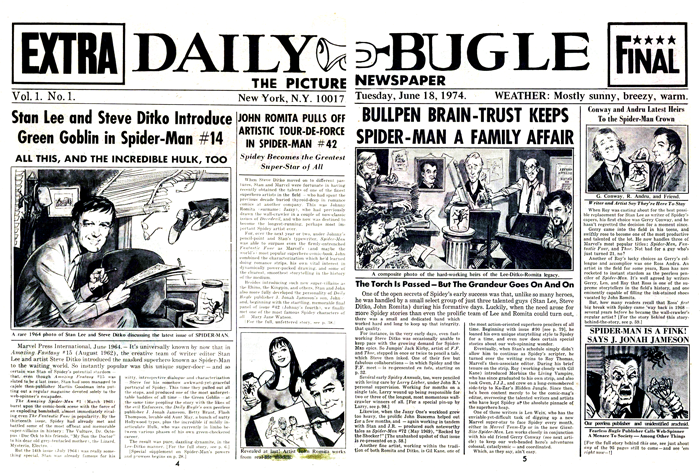 First up is The Grotesque Adventure of the Green Goblin, by Lee and Steve Ditko, from Amazing Spider-Man #14. In this story, the Goblin tries to lure Spider-Man into a trap by offering him a role in a movie! Peter, thinking of how the money could make Aunt May’s life so much easier, agrees to appear, but soon learns it’s all a nefarious plot (of course). The Goblin enlists the evil trio of gangsters known as the Enforcers to help, and they even manage to work the Incredible Hulk into the mix, whose hiding place is accidentally disturbed. Ditko is on all thrusters here, and the story is enormous fun. 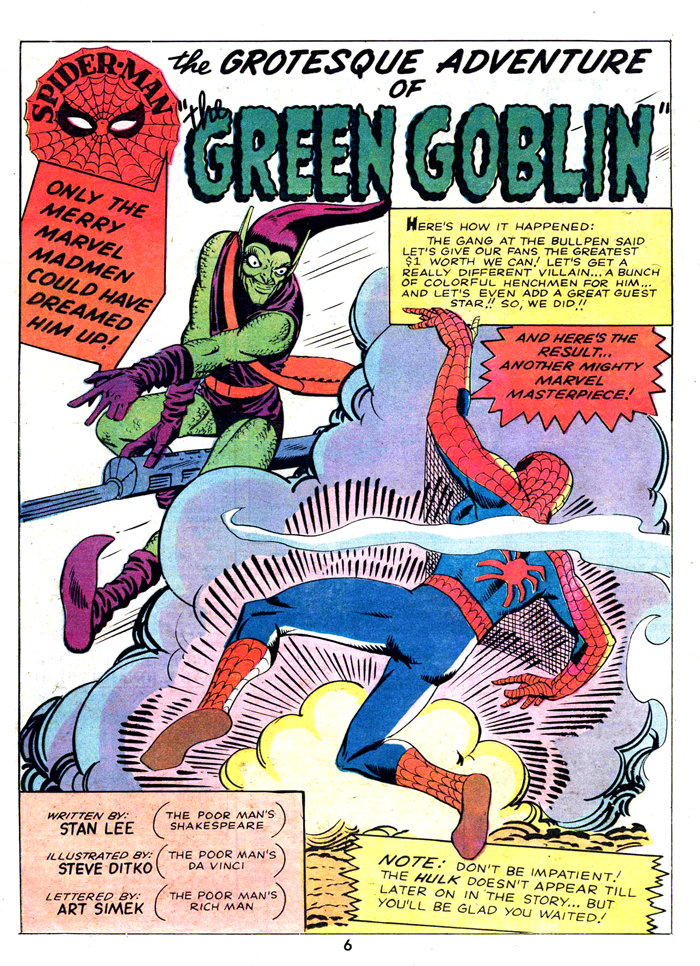 Next is a bonus feature, The Secrets of Spider-Man, which details all of the wall crawler’s powers, how his costume works, etc. That’s followed by Spider-Man Tackles the Torch! (from Amazing Spider-Man #8, by Lee and Jack Kirby). In this, Spidey crashes a party thrown by Johnny Storm in the hopes of stealing his girlfriend Doris away from him. While finding a story with the necessary page count was probably always a consideration when putting these books together, I love the fact that Marvel was willing to reprint a story that made Spider-Man—their #1 flagship character—look like a petty jerk.

We move into the Romita era with The Birth of a Super-Hero, from Amazing Spider-Man #42. While Spider-Man’s fights with the Rhino and a newly super-powered John Jameson are a lot of fun, this story is most remembered for its final page, where Peter Parker shows up for his blind date with Mary Jane Watson, who delivers one of the greatest final lines in all of comics. 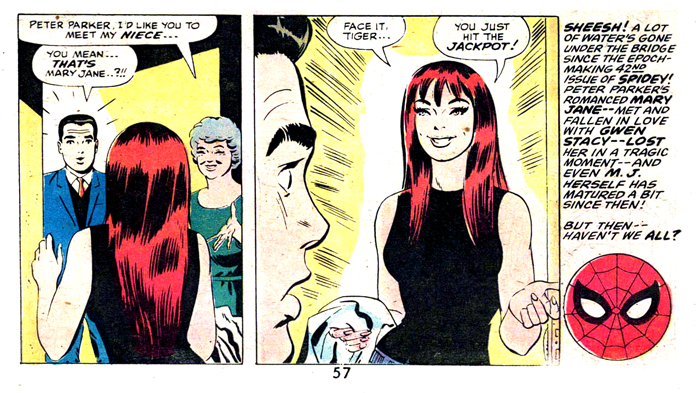 Sandwiched between this and the next tale is just one page from a Spider-Man story where he takes on the Shocker. In a fitting to tribute to one of Spidey’s more Mort-ish villains, the Shocker shows up here just long enough to be defeated by Spidey in three panels. 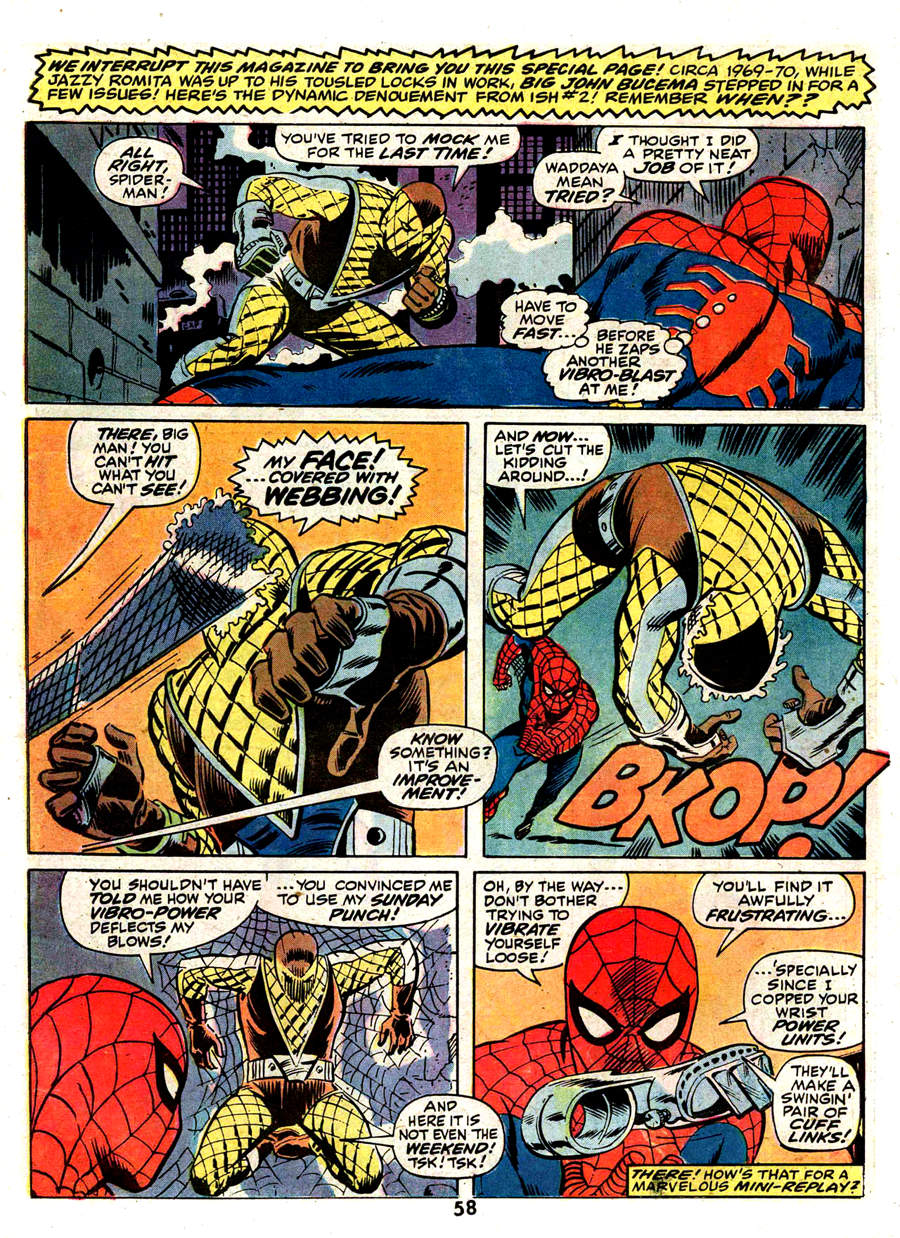 The next story is The Reprehensible Riddle of the Sorcerer, by Lee, Ross Andru and Bill Everett, from Marvel Super Heroes #14. An unusual choice for a “greatest hits” collection, since it features an obscure villain (as opposed to, say, the Vulture, Kraven, Mysterio, etc.) and is culled from an anthology title. At the time, Andru was the penciller on the Amazing Spider-Man title, so perhaps Marvel simply wanted him represented. In any case, it’s an offbeat story, with Spidey helplessly watching the bad guy he’s been fighting give up and walk off (literally) into the sunset.

The final tale, And Death Shall Come, is by Lee, Gil Kane and Romita (from Amazing Spider-Man #90), and features Spidey taking on one of his most iconic villains—Doctor Octopus. This story features a similarly legendary moment in the Spider-Man mythos, when Gwen Stacy’s dad, Captain George Stacy, dies in Spider-Man’s arms after being injured helping an innocent child escape the destruction that followed in Octopus’ wake. 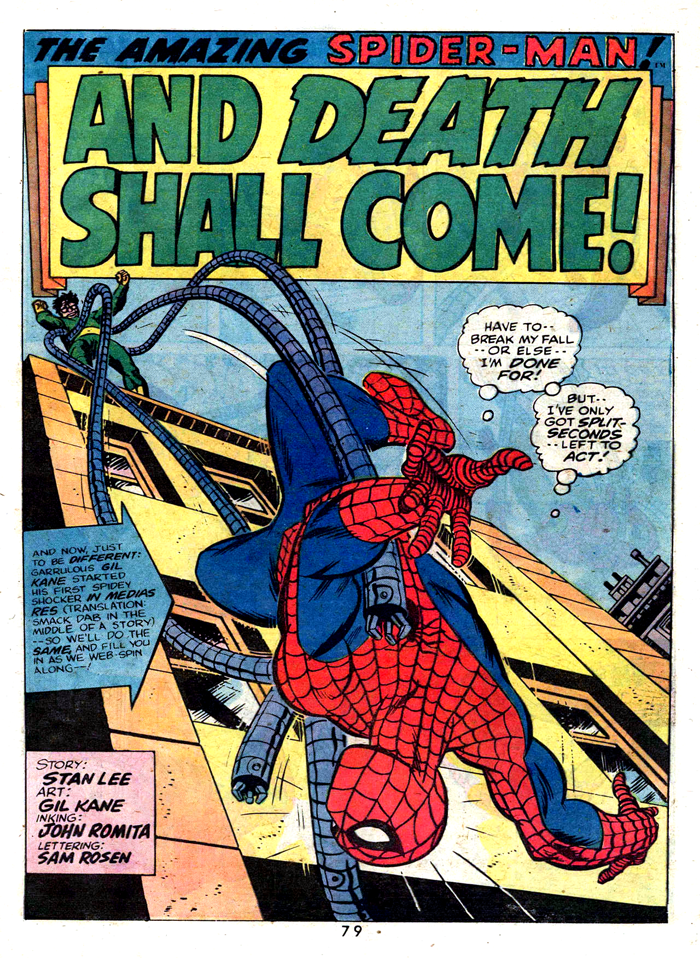 The book finishes up with a fun pin-up by Larry Lieber, detailing who in the Marvel Universe might be stronger than our hero, a cover gallery, and a handsome back cover (again by Romita) bearing a slightly altered version of Spidey’s now-legendary mission statement: “With great power, there must also come great responsibility.” 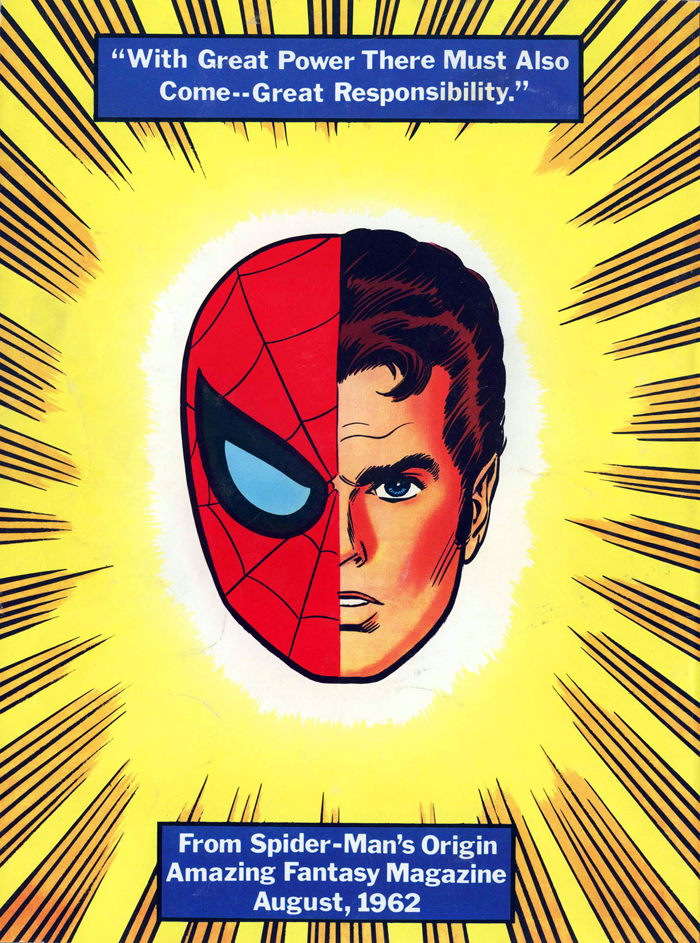 While Marvel would go on to publish a few dozen treasury editions, many of them excellent, in a lot of ways they never did a better one than this. Marvel seemed to know, instinctively, how to present their material in the most exciting manner possible to their audience. While DC went with the descriptive but anodyne title Limited Collectors’ Edition for their treasuries, the House of Ideas emblazoned Marvel Treasury Edition across the top of their oversized books, reminding everyone who was behind these giant-size treasures. And while it took DC several months to get their top-selling characters Batman and Superman into the treasury format, Marvel started the whole shebang off with a greatest hits collection of their most popular character, with an eye-catching cover drawn by the artist who did most of their merchandising work. Marvel was looking to hit it out of the park their first time at bat, and they did.

Spider-Man would go on to rack up many more appearances as a top-line treasury edition star, including the classic Superman vs. Spider-Man book. When Marvel started doing treasuries again in 2016, after a 30-year drought, who was the first character they picked to get one? Spider-Man, of course.

Not bad for a skinny nerd from Queens!

For more on Marvel Treasury Edition #1, check out TreasuryCast on The Fire and Water Podcast Network!

— THE TOP 13 TREASURY EDITIONS THAT NEED TO BE RE-RELEASED — RANKED. Click here.