Kicking off an EXCLUSIVE weekly, behind-the-scenes look at the artist’s covers for Legacy of Spock.

Man, I love Star Trek. Especially anything to do with the Original Series, or as I like to call it, “Star Trek.”

So I’m pretty excited to be able to present a new feature here at 13th Dimension: Trek Tuesdays with Tony Shasteen.

Tony is the artist on IDW’s Star Trek ongoing series and the next arc written by Mike Johnson — which launches this week with Issue #55 (3/9) — focuses on Mr. Spock.

The Star Trek ongoing takes place in the new-timeline movie universe but as you may remember (spoiler alert), there are two Spocks in this reality: The Zachary Quinto version and the original, as portrayed by the late, great, one-and-only Leonard Nimoy. 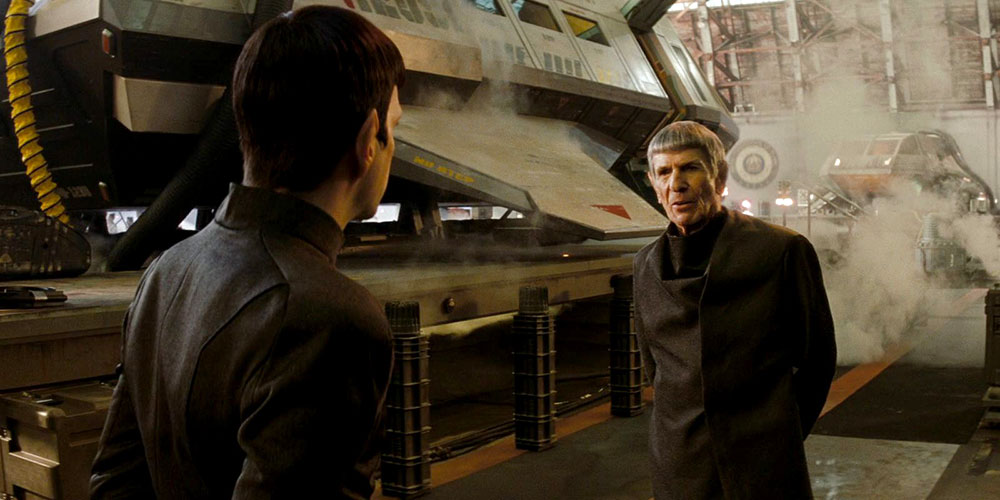 Tony is also producing covers and we’ve invited him to do a weekly commentary on each for the next four weeks. (J.K. Woodward is also doing covers.)

If you’ve seen any of Tony’s covers for these monthly issues, you know how great they are. Now you get to find out what went into them.

And, hey, you never know, we might just keep Trek Tuesdays going all the way until the show’s 50th anniversary this fall. — Dan 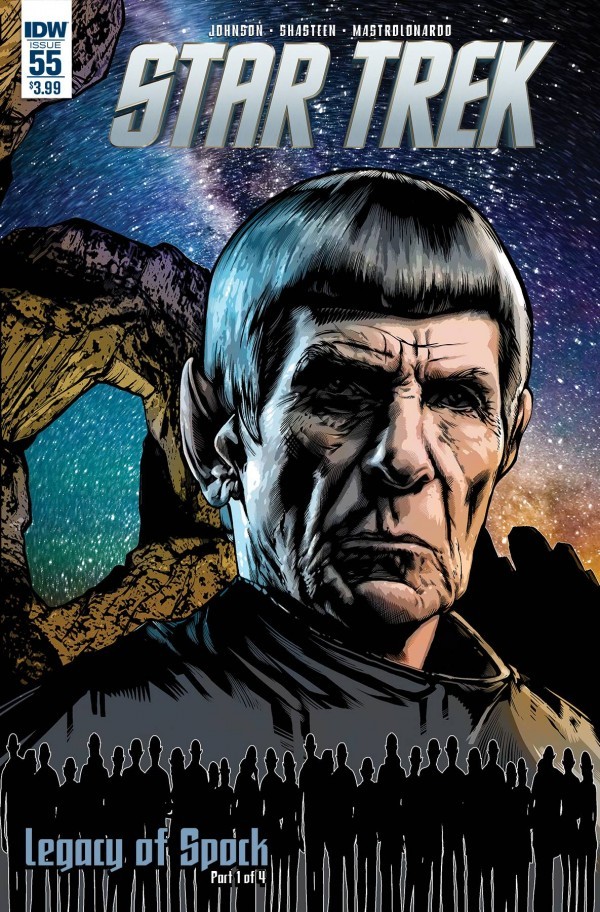 Star Trek: Legacy of Spock was announced at New York Comic Con and to be ready for it, I needed to get the covers done in advance. The scripts were still in the works at the time and that’s usually a little tricky because you only know the broad strokes of the story. This is common in comics. Usually covers need to be available for Previews months before the script has been written.

Over the four issues our amazing writer Mike Johnson wanted to focus on Spock, the new Vulcan colony, and reflections back on Spock’s life and career. This was exciting news for me because I knew I’d be able to go back and work with the original crew! I have a warm place in my heart for that cast of characters. I’m a child of the ’80s so I grew up with the movies and the Original Series in reruns.

Working on an arc that focused on Nimoy Spock was a dream. The very first panel of the first page of Trek I worked on was Nimoy and I had been itching to draw him again ever since. Well, I got my wish.

The focus of the cover is on Spock, but more of a semitransparent father figure that the Vulcan people are looking up to, to build a new home. The remaining Vulcan people were represented by the shadowy figures under Spock. I didn’t know which Vulcans we were going to visit throughout the storyline or what their intentions would be, so I kept them in shadow. It made it look a bit creepy, but I thought that would help with the tone of the arc. 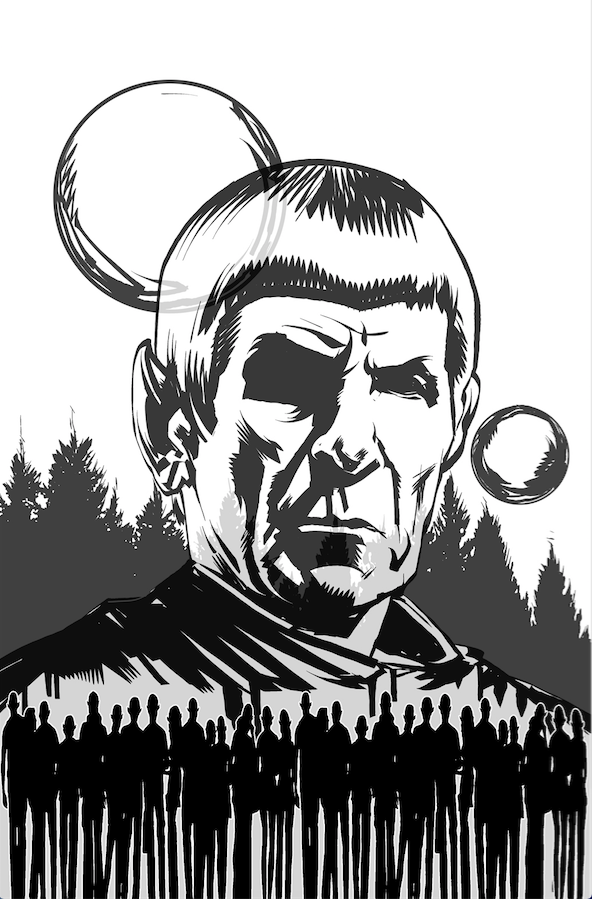 The environment in the background was supposed to imply a new home that was different from Vulcan, and the two moons in the background are basically there to show they’re not on Earth. I wanted something to look a little more alien.

Notes came back letting me know the new home would probably be dry/desert like Vulcan, and to go more towards alien, mesa-type rock formations. 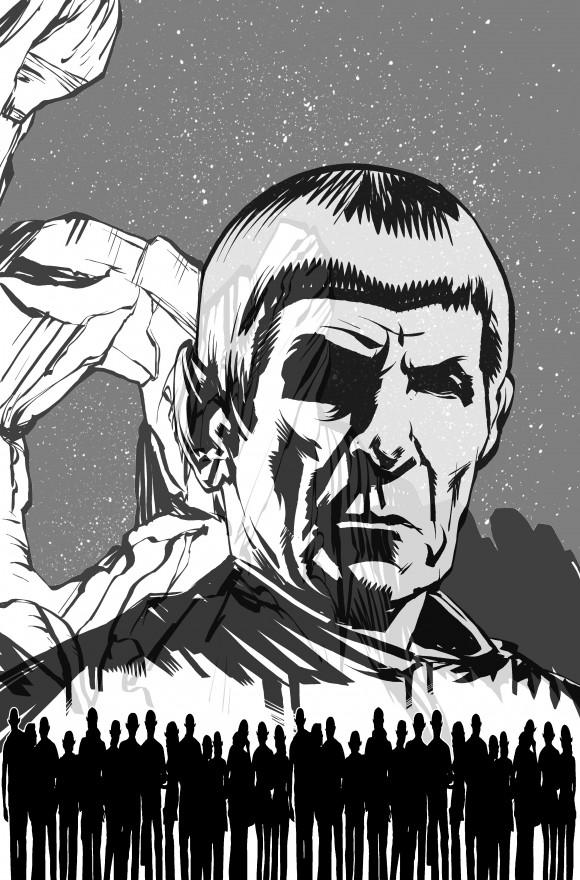 The concept was approved and I was off to finish the cover.

My first attempt at the cover gave Spock a semitransparent look. I wanted it to look like more than a portrait. You could see through him and he was part of the Vulcan people’s new home. Starlight would be the highlights in his eyes, and the rocky formations would be part of his chiseled face. 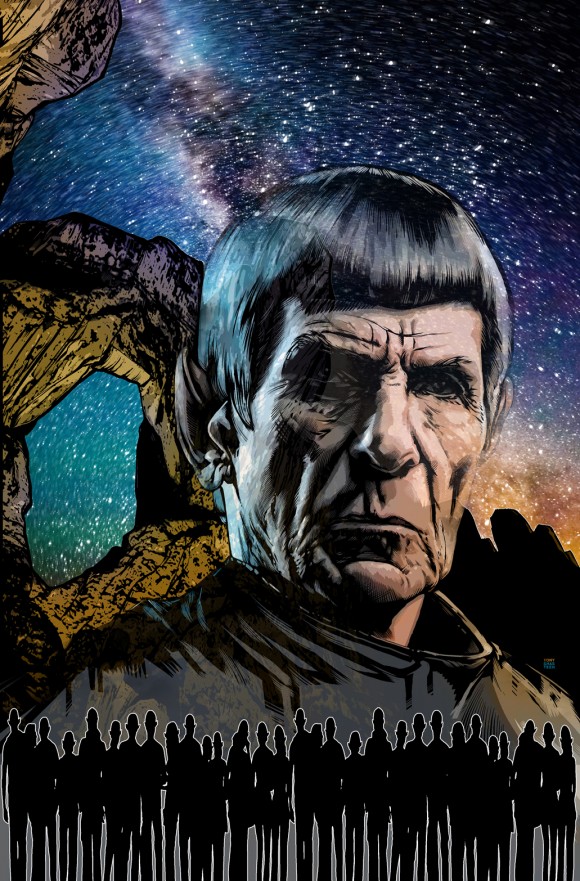 The transparency was a little confusing and some thought it might look accidental, so edits were made and the cover was wrapped up. Comics are a collaborative process, and that’s even more of the case with a licensed book. Sometimes it’s a simple process and sometimes there’s a bit more back and forth. 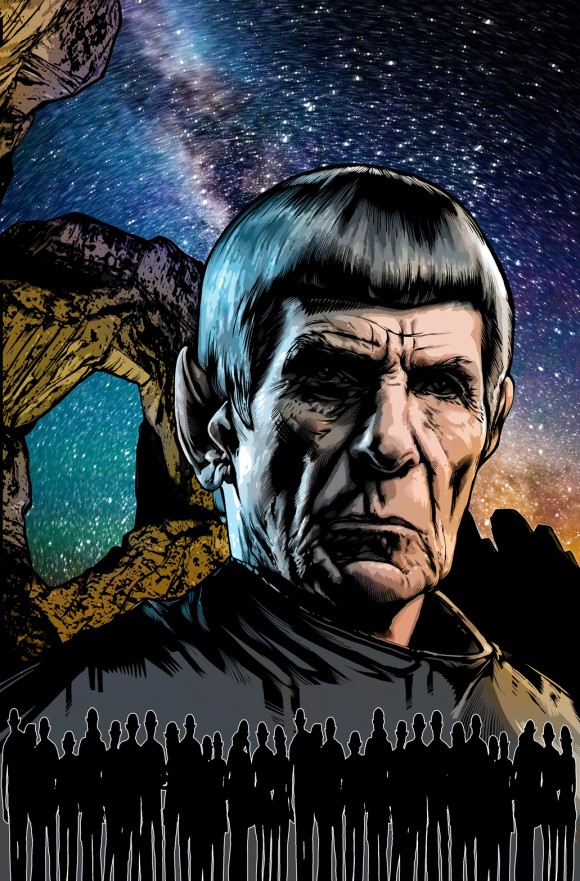