Touring America, One Comic Book Shop at a Time

Anthony Desiato is the host of the podcast My Comic Shop History and its spinoff Flat Squirrel Tales. Anthony’s been spending the summer traveling the country visiting comics shops (lucky guy) to see what sets them apart, as well as what they all have in common. He’s chronicling everything for a documentary called My Comic Shop Country, as well as featuring each stop on his podcasts.

In the latest episode, he focuses on Midtown Comics in Manhattan. (I’m even a guest, speaking from the perpective of a regular customer.) You should check it out here on iTunes. (Better yet, subscribe!)

In the meantime, he’s put together a list of 13 highlights from his tour so far. If you’re at all into comics — and why are you here if you’re not? — you’ll dig this. (All pix by Anthony’s wife Stephanie Desiato.) — Dan 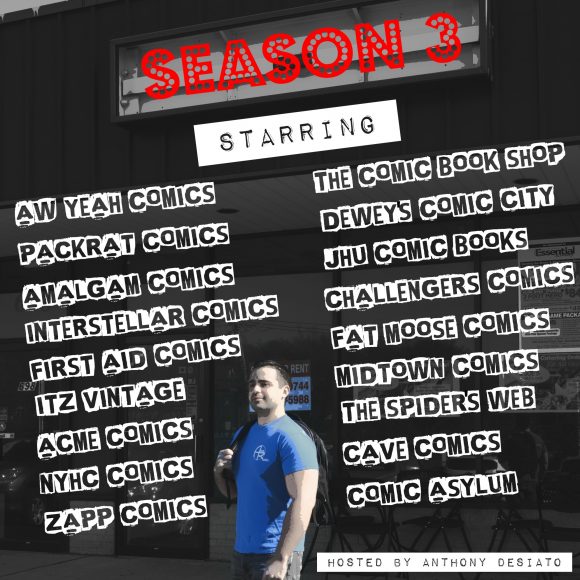 In 2015, my local comic book store celebrated its 23rd anniversary by closing up shop. After bidding Alternate Realities in Scarsdale, NY, a bittersweet farewell, I set out to explore other comic shops and speak to the folks behind the counter (the “boots on the ground” in the comics retail industry).

For the past few months, I have been traveling to comic book stores around the country for one of the podcasts I host, My Comic Shop History.

Here are 13 highlights from my odyssey thus far:

1. It comes as little surprise that the challenge of delinquent customers (reservists/pull list subscribers who do not pick up their books) affects almost every store in one form or another. Each shop has its own reserve policy and enforcement method. This is how Comic Asylum (Palm Desert, Calif.) tries to recoup some of those lost sales: 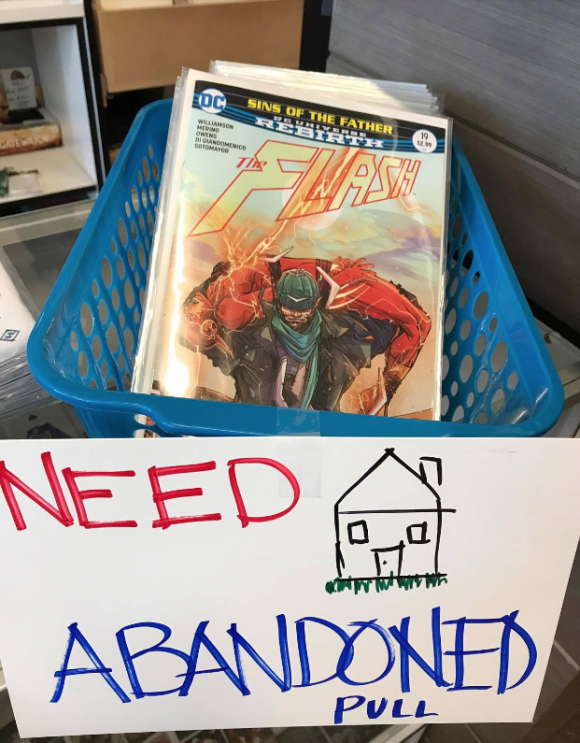 2. From new stores to industry veterans, shops are staying relevant through proactive community-building (The Comic Book Shop in Wilmington, Del., hosts regular kids, teens, ladies and LGBT events); technology (Packrat Comics in Hilliard, Ohio, utilizes a digital pull list system through Comixology); and customer service (a few of the retailers I spoke to read just about every book that comes in so that they are able to make personalized recommendations to patrons). 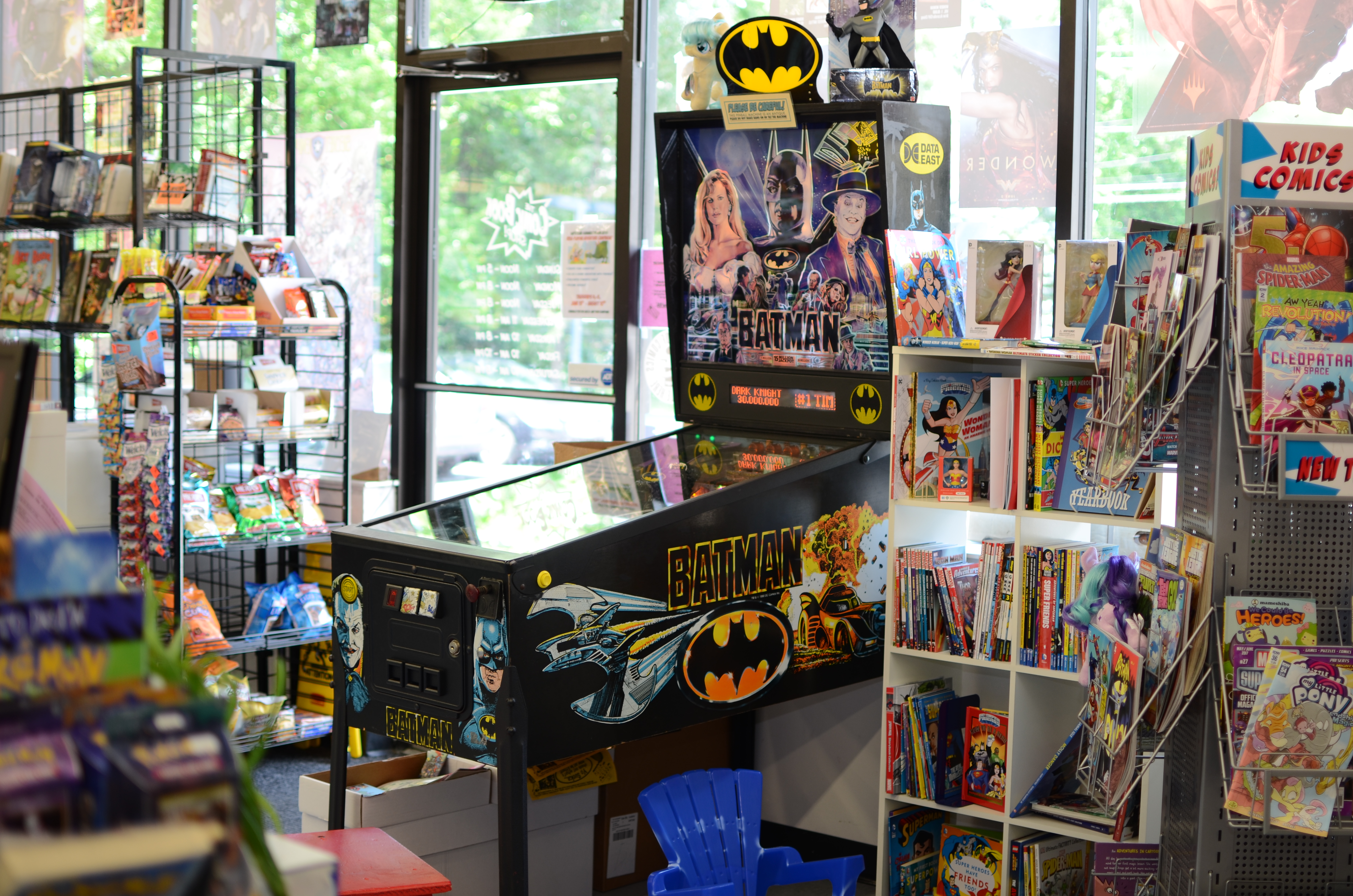 3. Fat Moose Comics (Whippany, NJ) employee Shawn Hendricks regaled me with tales of “Diamond secret shoppers,” agents of the comics distributor who periodically visit stores posing as regular customers. The purpose of this subterfuge is to ensure that shops are not selling new comics before Wednesday (stores receive their shipments on Tuesdays). How do you know if a secret shopper is in your midst? They tend to be first-time visitors asking for random titles that are not due to hit shelves until the next day. 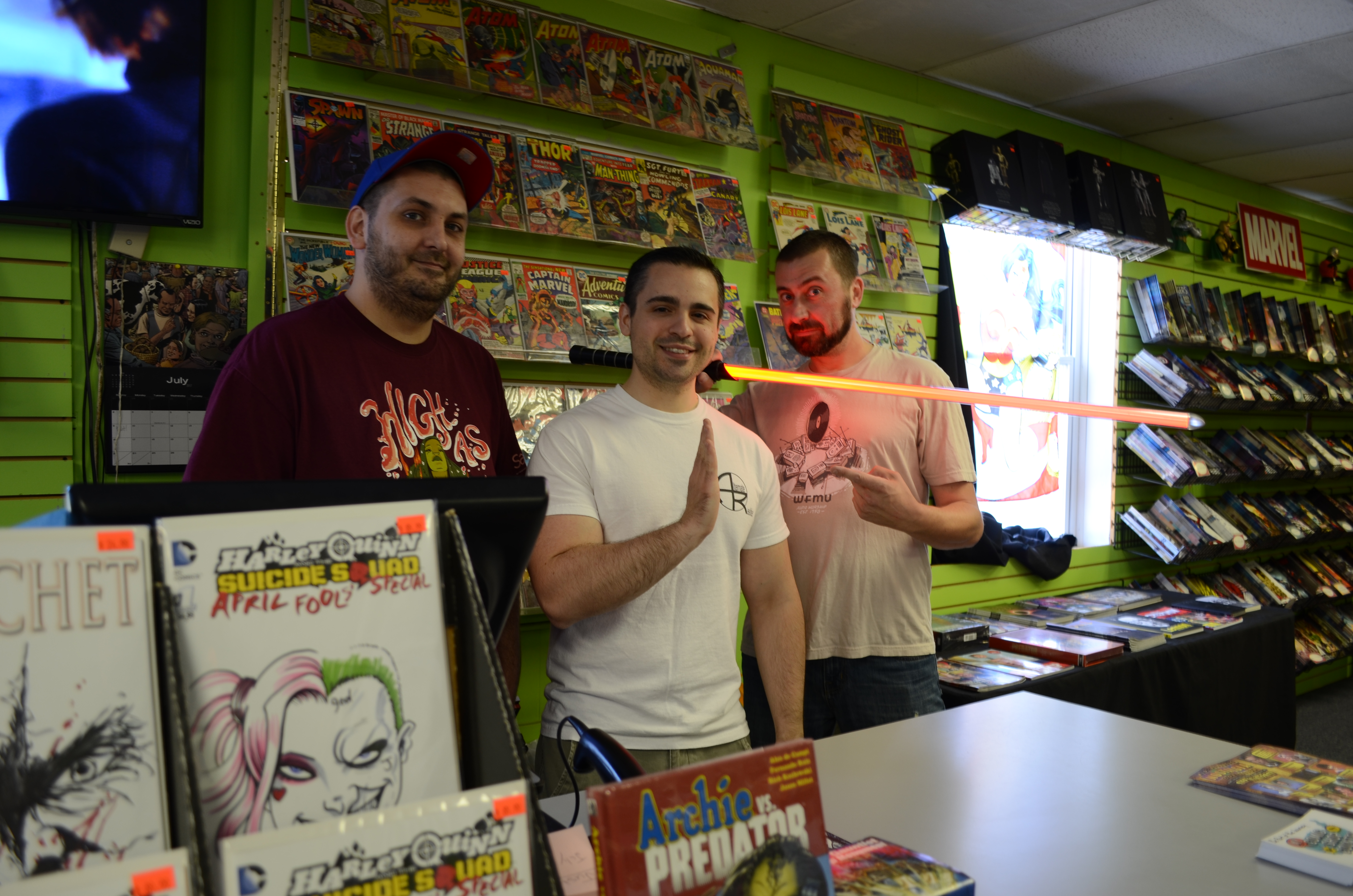 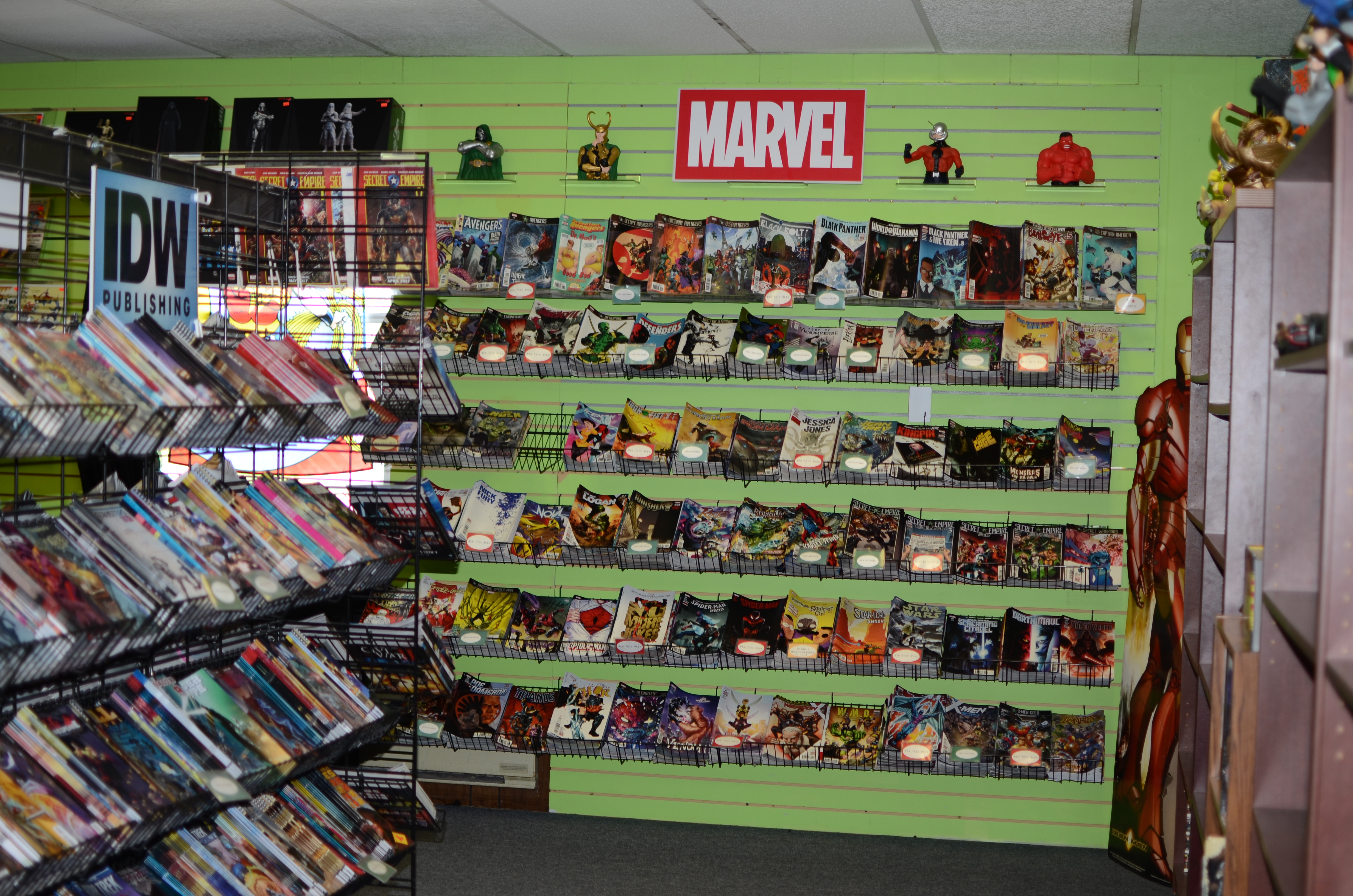 4. By the time AR closed, its owner was paying close to $7,000 a month in rent for approximately 1,500 square feet. As I visit other parts of the country, I am struck by the real estate value enjoyed by some shops. For example, in addition to their large, main storefronts, both Packrat Comics and The Comic Book Shop also rent the spaces next door and use them solely for gaming and storage.

5. To quote George Clooney’s character in Up In the Air, “Everybody needs a copilot.” I have encountered no less than three stores run by husband-and-wife teams: Packrat Comics (Jamie & Teresa Colegrove), The Comic Book Shop (Patrick and Sarah Titus), and Palm Desert, California’s Comic Asylum (Javel & “Chicks” Halay-Ay). The couple that retails together… 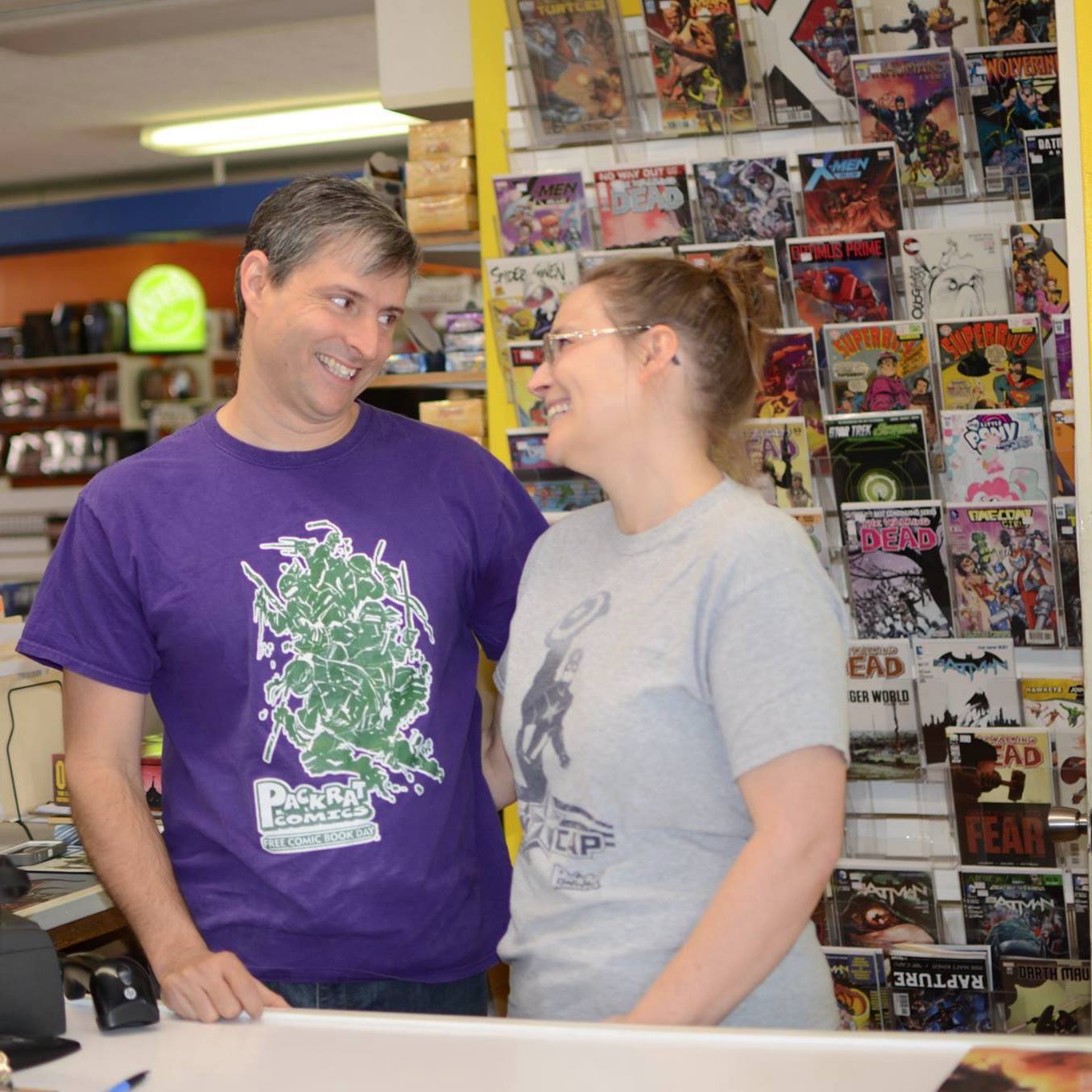 6. There is a restaurant called Burgerittoville right next to Cave Comics (Newtown, Conn.). I did not partake during my visit to Cave Comics, but it sounds glorious.

7. Funko POPs abound, but statues may just be on the endangered species list. A number of the shops I visited still carry them, of course, but I have seen less than I expected. It makes sense, though: Statues are expensive for both retailers and customers, and that is a lot of capital to be tied up in product that may not move.

8. Jermaine Exum of Acme Comics (Greensboro, NC) wins the award for most podcast mentions by other retailers this season.

9. “Friendship and fun” was AR’s motto, borne in large part out of our tradition of weekly dinners attended by the owners, staff and customers alike. However, Cave Comics owner Pat Calanan explained to me that he purposely does not socialize with his employees or customers outside of the store so as not to blur the retail relationship. 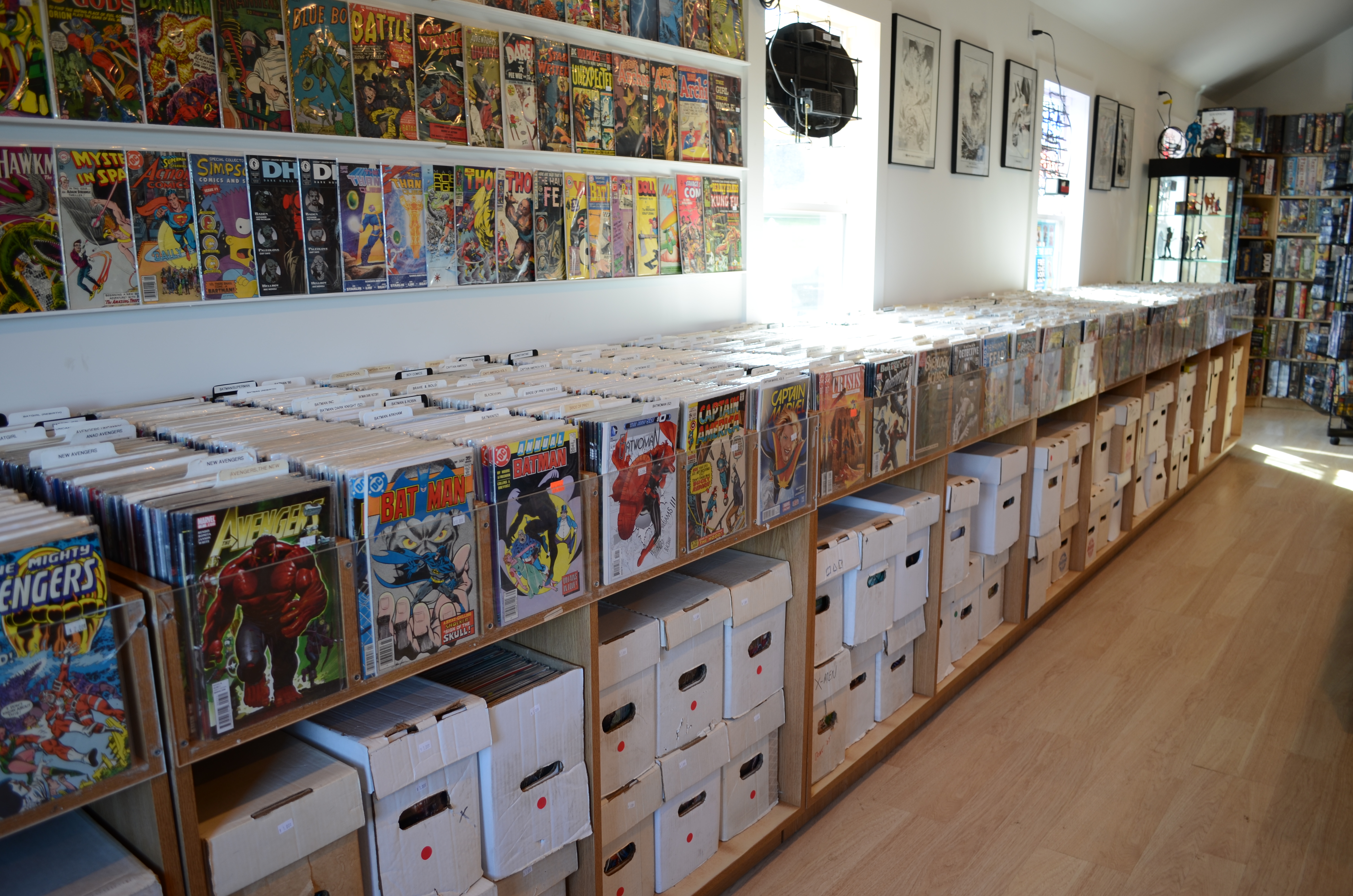 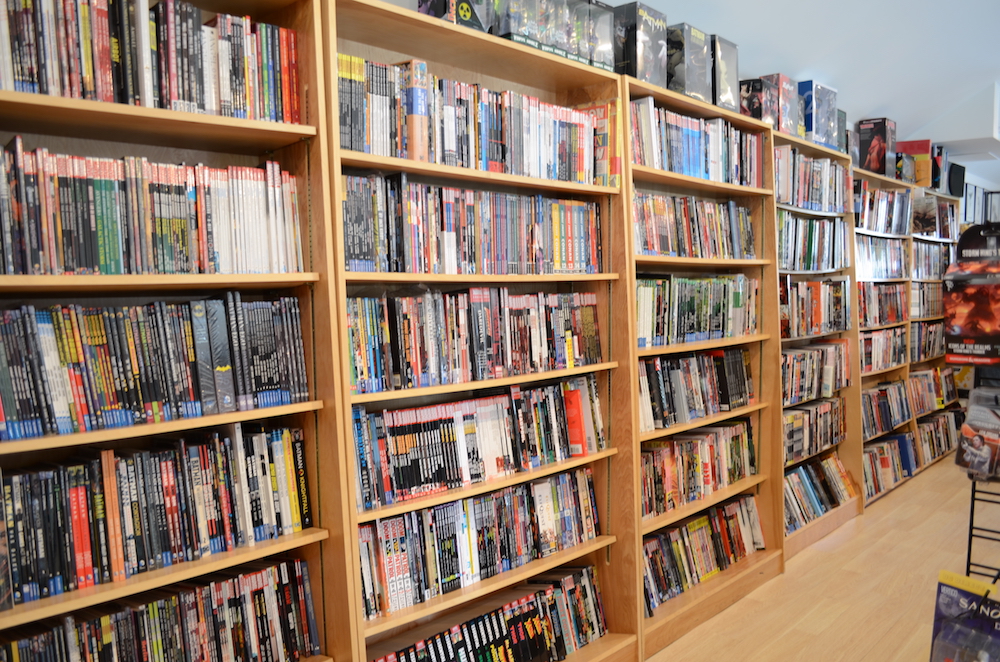 10. Amalgam Comics and Coffeehouse (in the Kensington neighborhood of Philadelphia) is just that: two businesses in one. I question whether other stores will adopt similar models and incorporate a secondary venture — coffeehouse or otherwise — to supplement their comics sales. I am curious to find other examples out there. 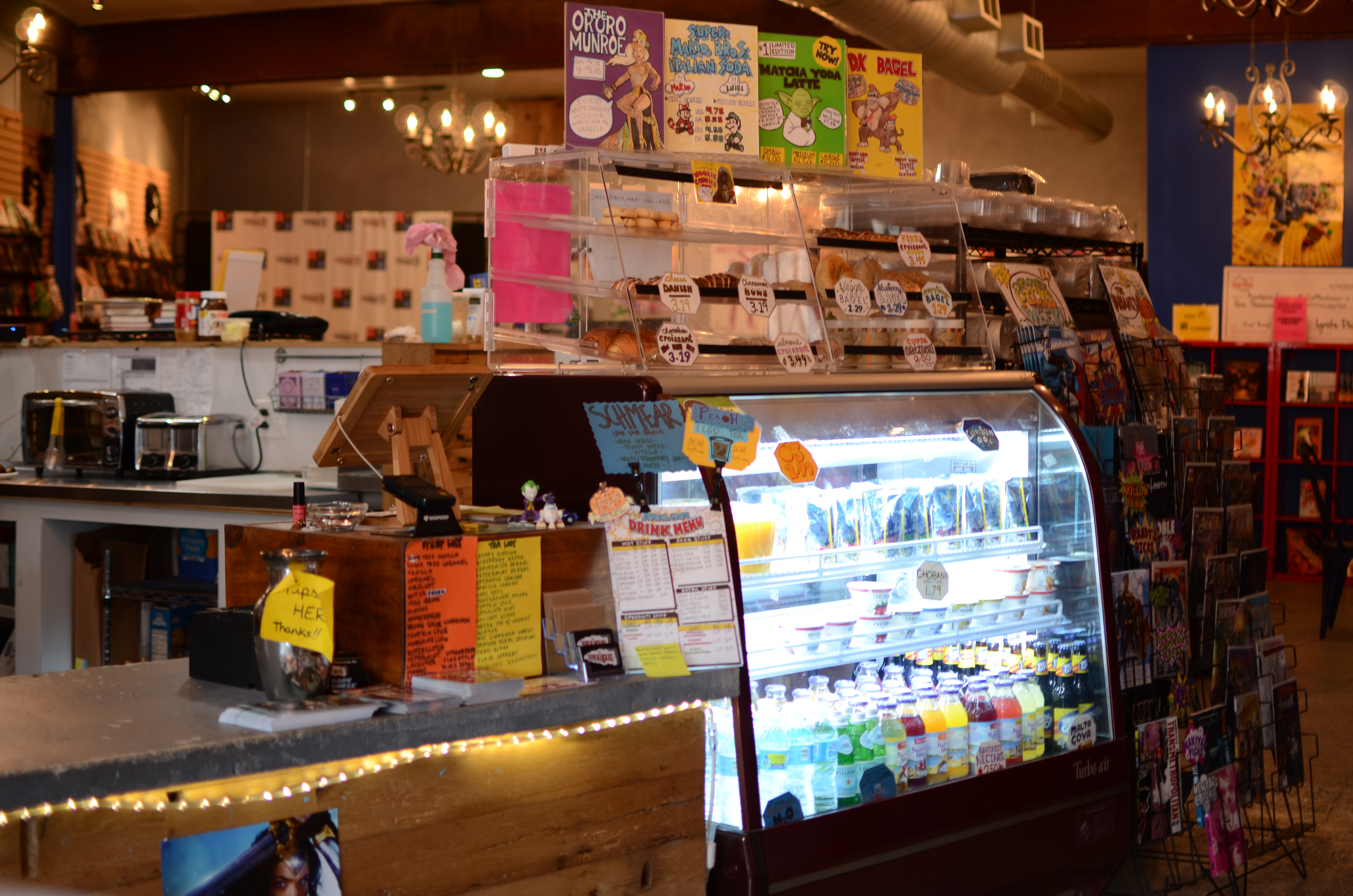 11. Book organization varies: Some separate by publisher, while others are strictly alphabetical. One practice that is consistent? Stores do not bag their trades! AR did, and I always assumed that was the norm, but I now realize that AR was an outlier.

12. AR was overflowing with merchandise prior to its closing, with boxes piled in the aisles (and pretty much anywhere else there was room). It takes a long time for a store to get to that point, though. For example, California newbies Comic Asylum and Interstellar Comics (Palm Springs) are still working to build up their inventory. Closer to home, Aw Yeah Comics (Harrison, NY) is now ramping up its collection –buying to expand the store’s back-issue and toy selections. They are in good company when it comes to humble beginnings: Fat Moose Comics (est. 1982) opened with $1,000 and no cash register, and Packrat Comics (est. 1993) had six long boxes from the owner’s collection to fill the shelves. 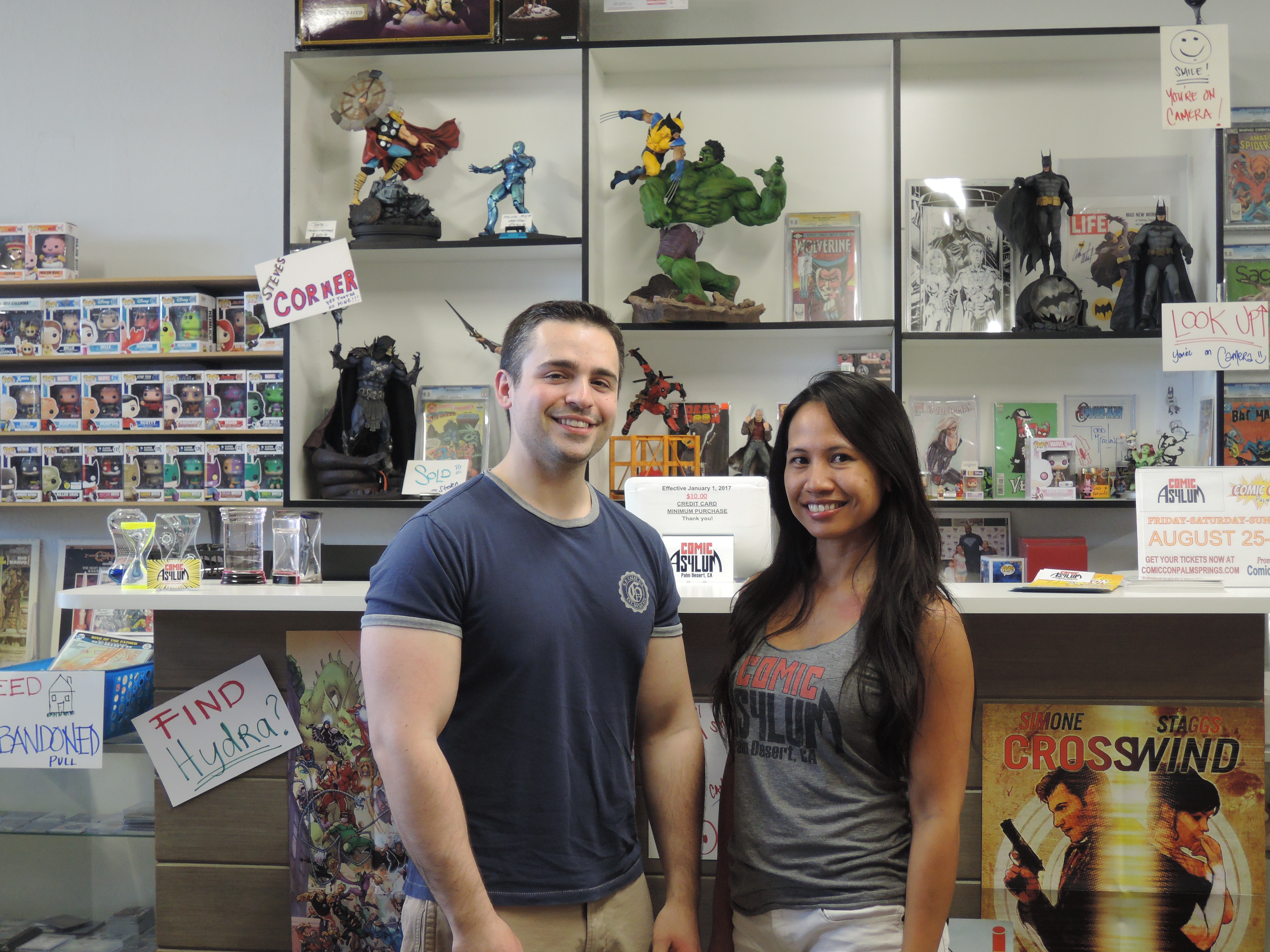 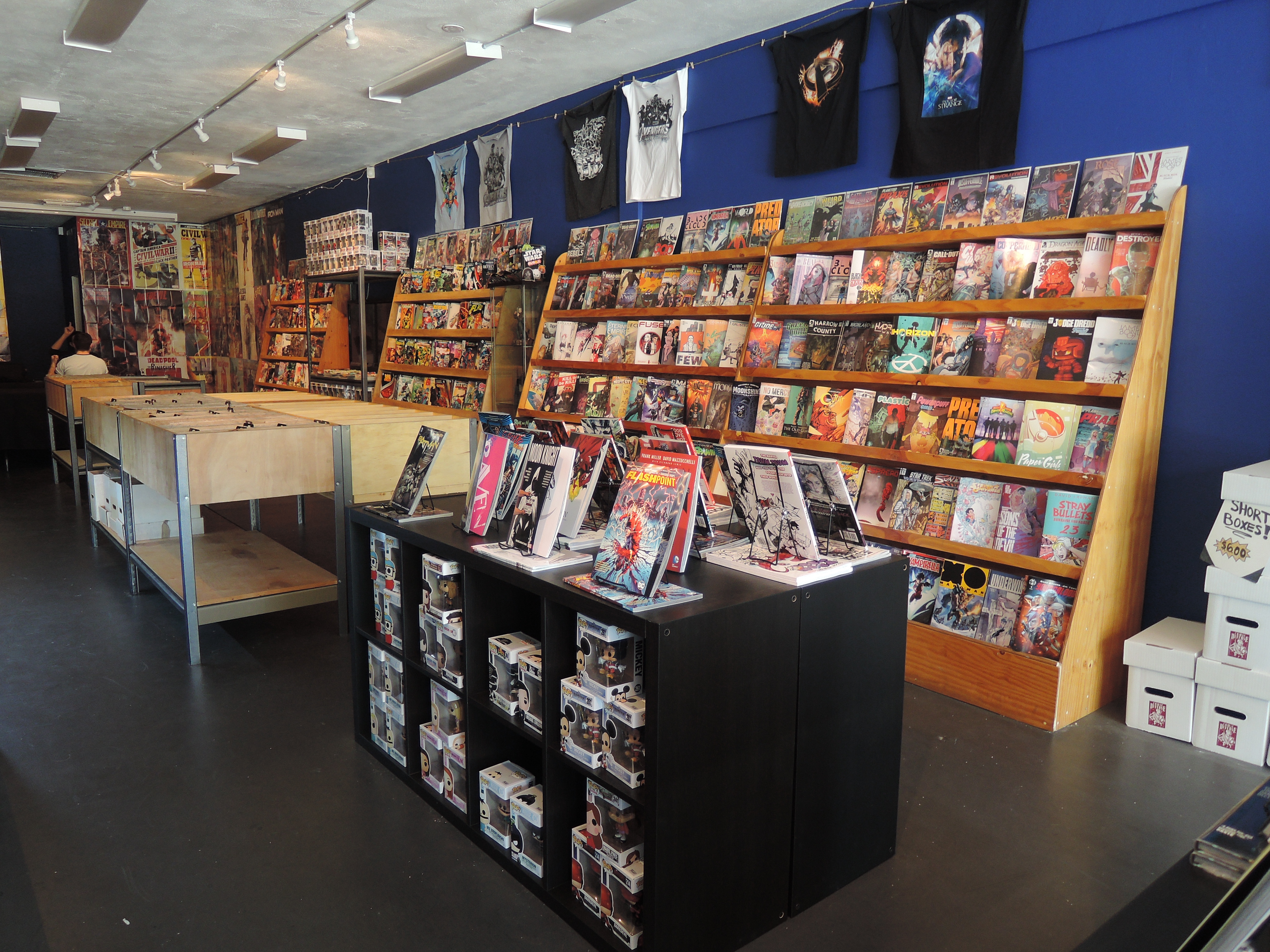 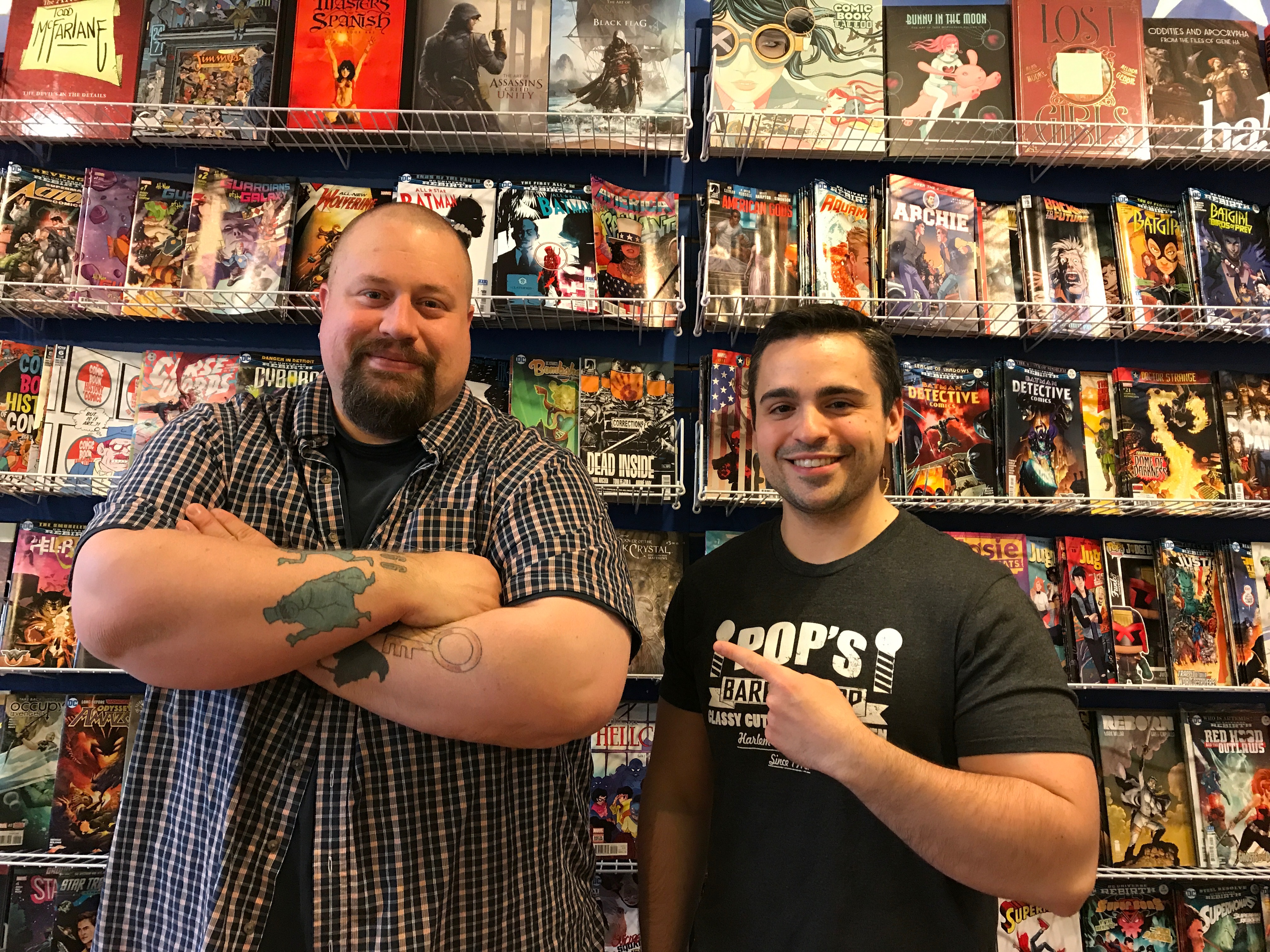 13. This last one may sound corny, but it’s true: Across the board, the stores I have reached out to — all the way up to a certain metropolitan juggernaut celebrating its 20th anniversary (congratulations, Midtown Comics!) — have been responsive, generous, and welcoming, demonstrating that sense of community and camaraderie that drew me to this project in the first place. I am grateful to be able to tell their comic shop histories. 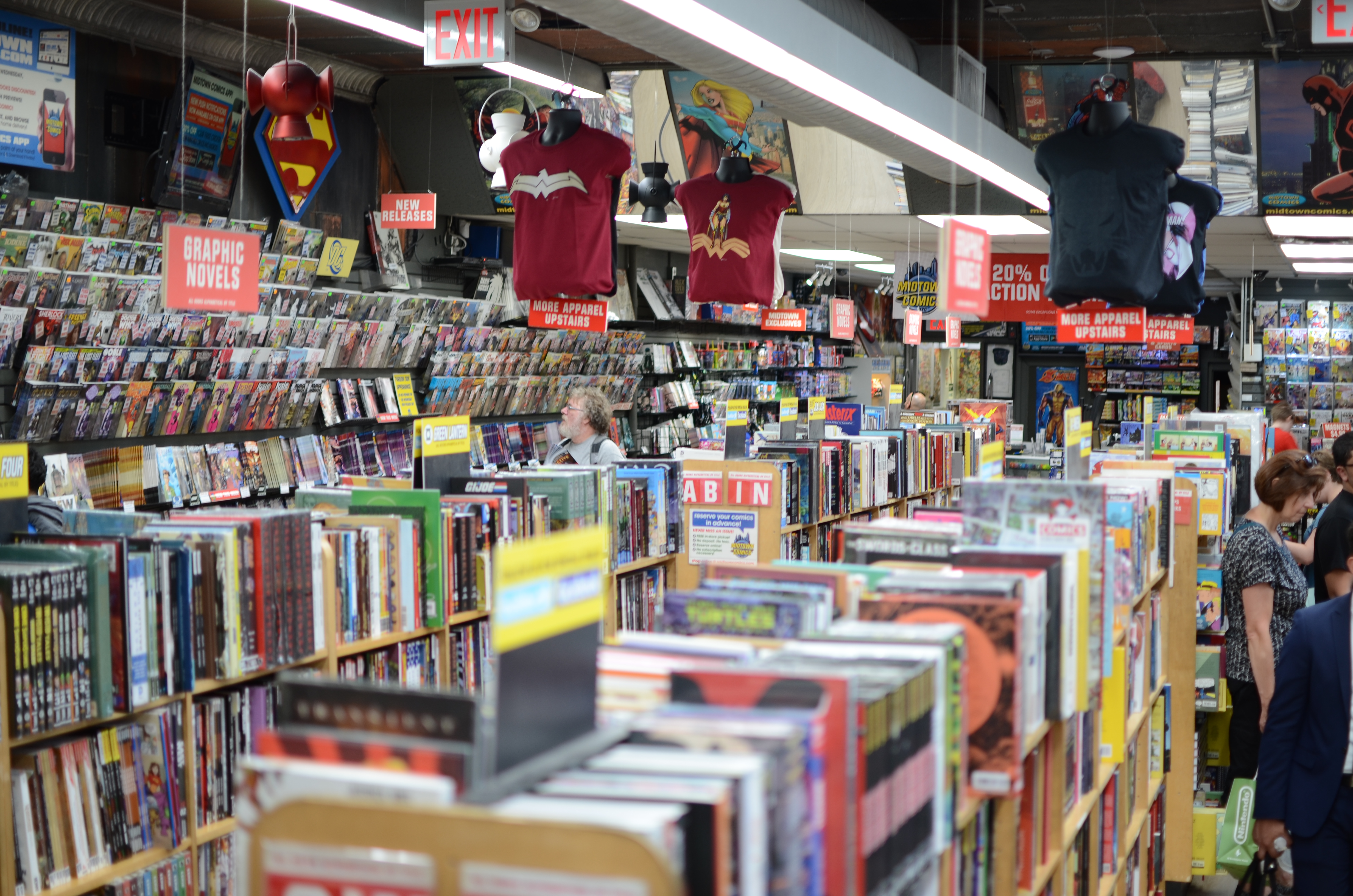