TREK TUESDAYS: We turn our attention to Star Trek merch!

For the first six weeks of TREK TUESDAYS, I focused largely on publishing, specifically some of IDW’s excellent output. Now we’re going to start checking out some of the cool Trek swag on the market. 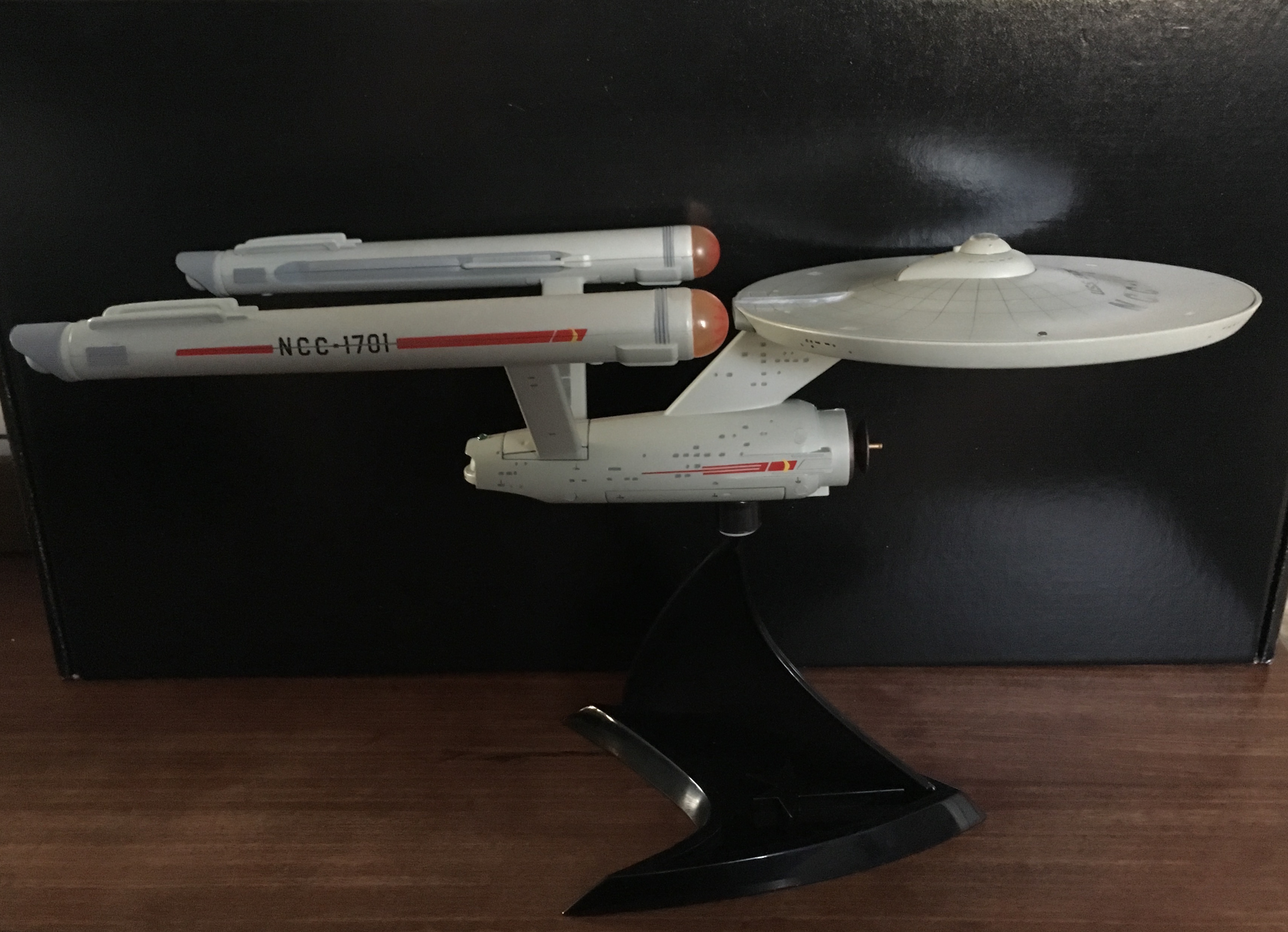 It’s been out for a bit, but if your warp engines are starting to get heated as we get closer to the show’s 50th anniversary, you gotta check out Diamond Select Toys’ Original Enterprise NCC-1701.

This Enterprise is a slick item that (in a literal sense) presses just about all the right buttons. 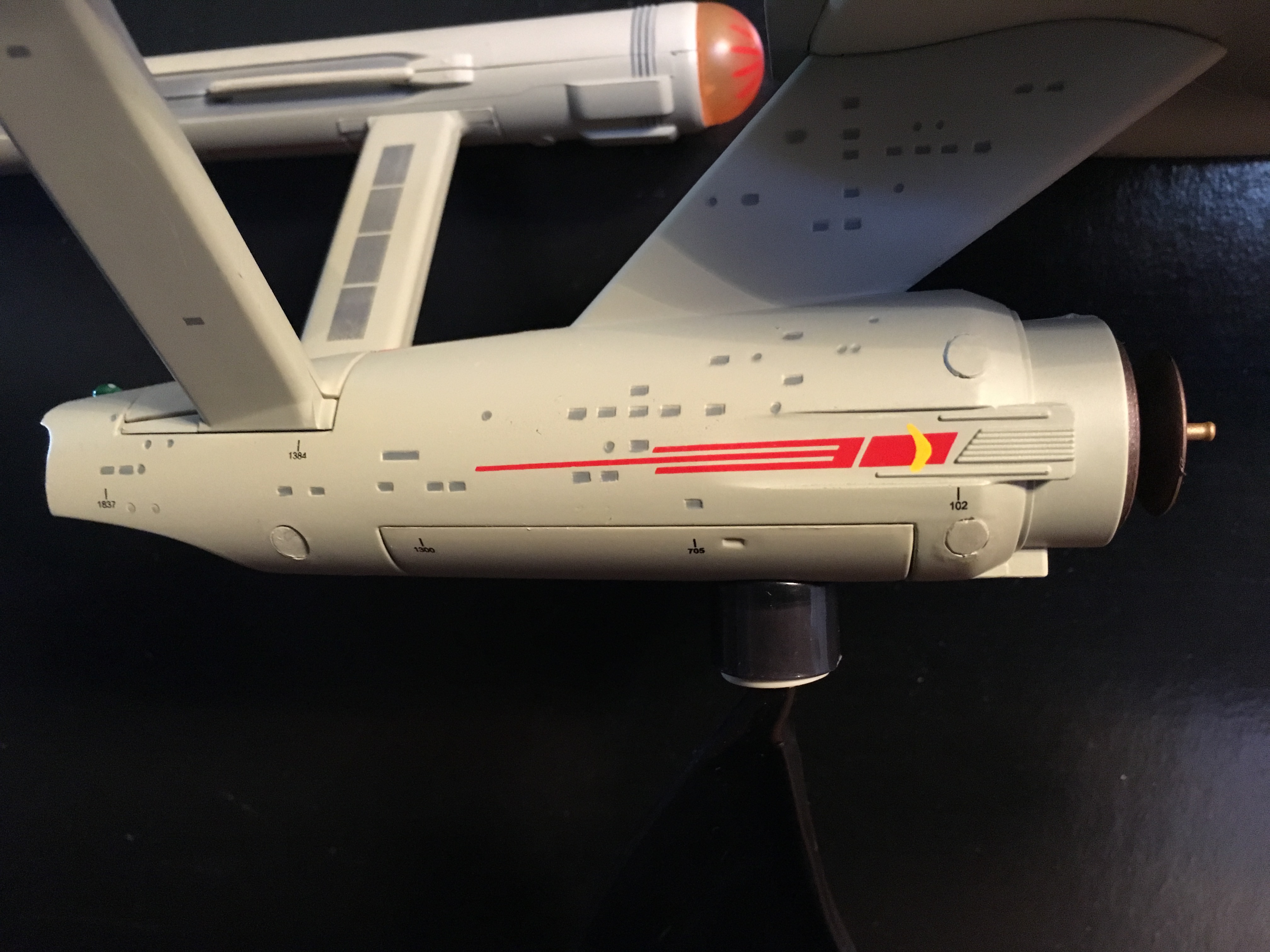 It’s a coolly accurate scale model of the original ’60s ship and if you push down on the bridge at the top, you get one of 15 phrases or sound effects directly from the show.

For example, William Shatner’s Kirk intones, “Engines ahead … Warp One.” Press again and you get the sound of the engines revving up. Press again and you might get Kirk’s famed “Space, the Final Frontier …” voiceover — and it’s all taken directly from the show’s original audio. 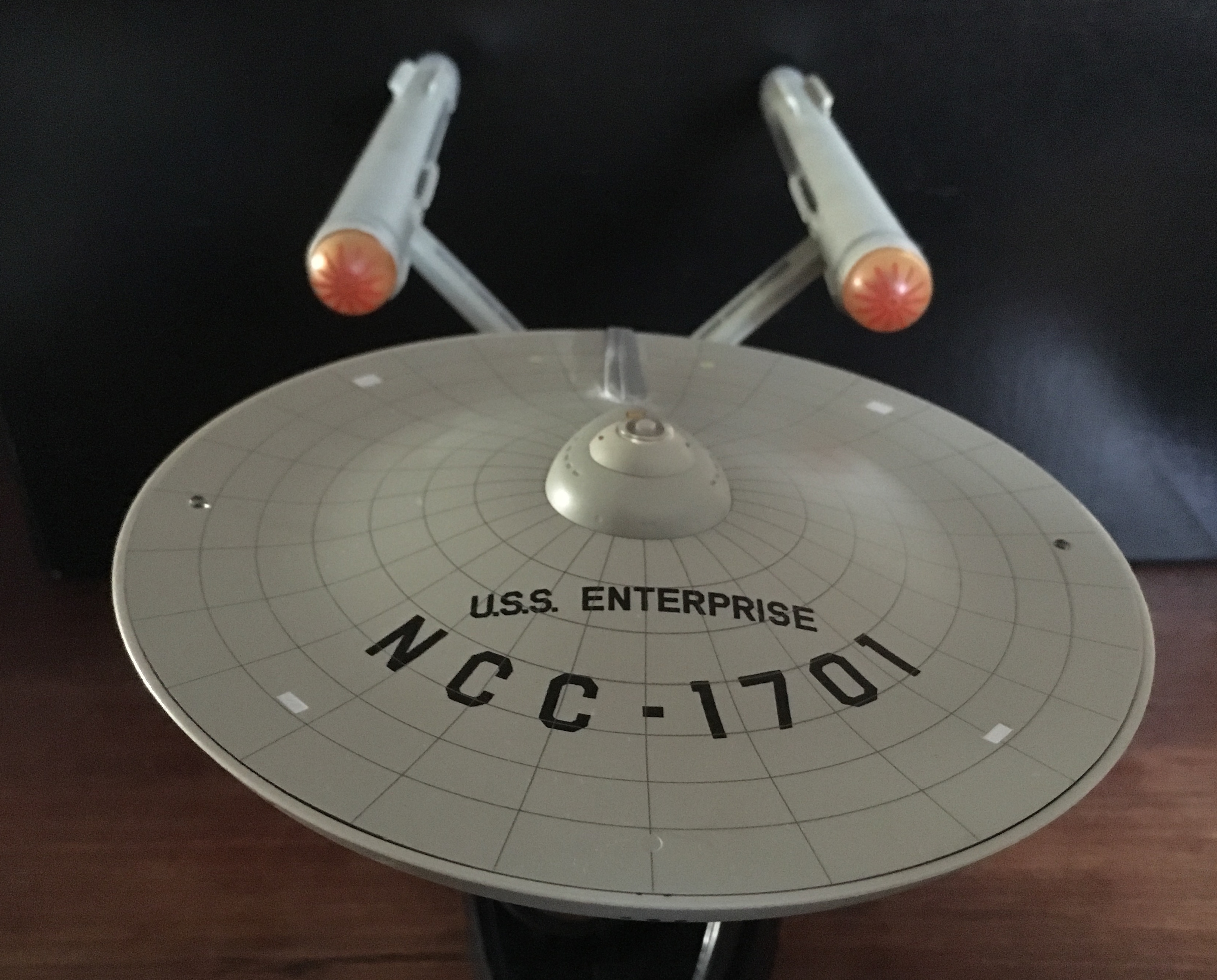 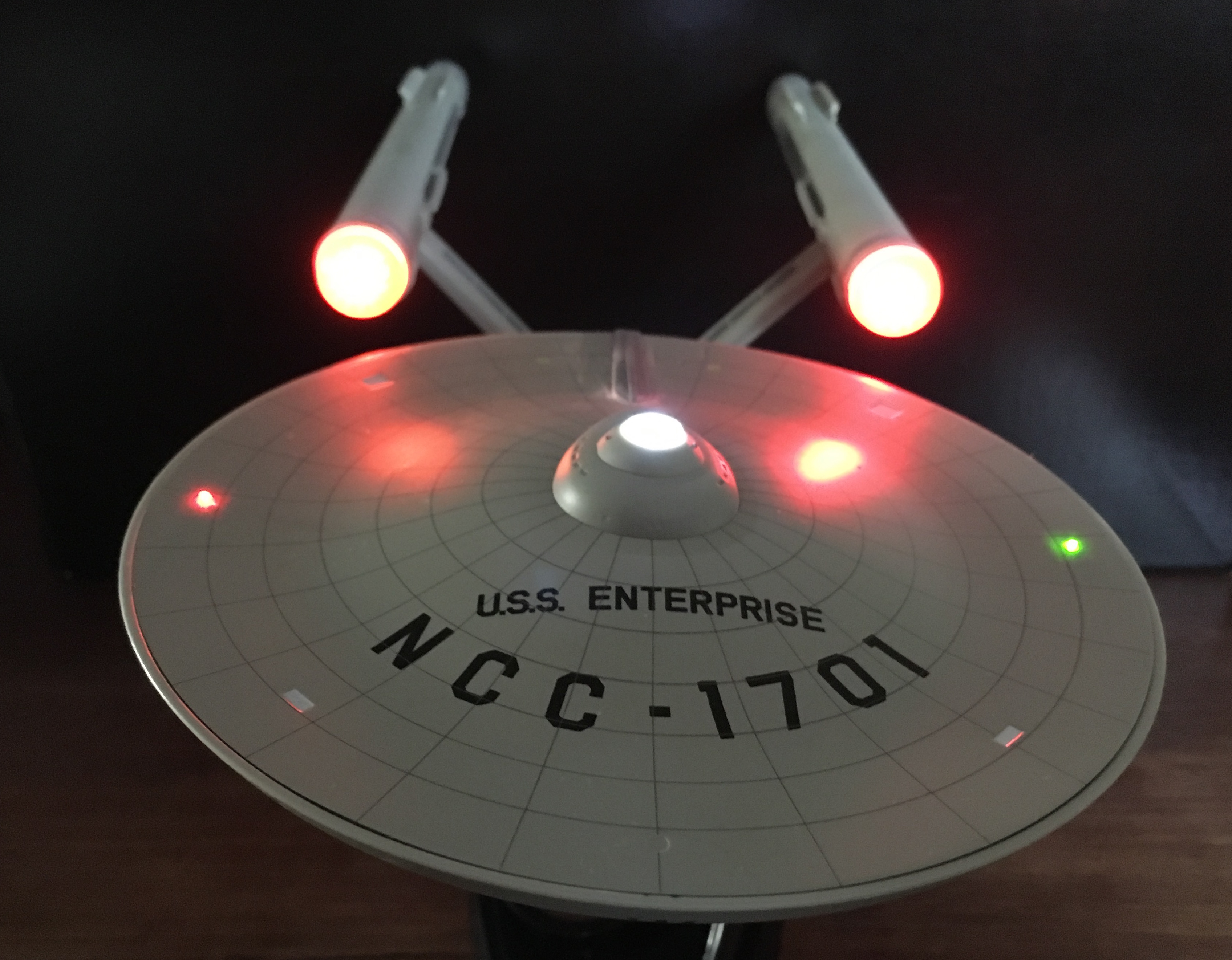 In addition, the sounds are accompanied by lights that are strategically placed on the hull to give you the illusion of a working starship.

The model is an upgraded version of one put out by Diamond some years ago. It looks more like the one seen on the shows that feature digitally remastered special effects, but I can barely tell and it makes no difference to me. 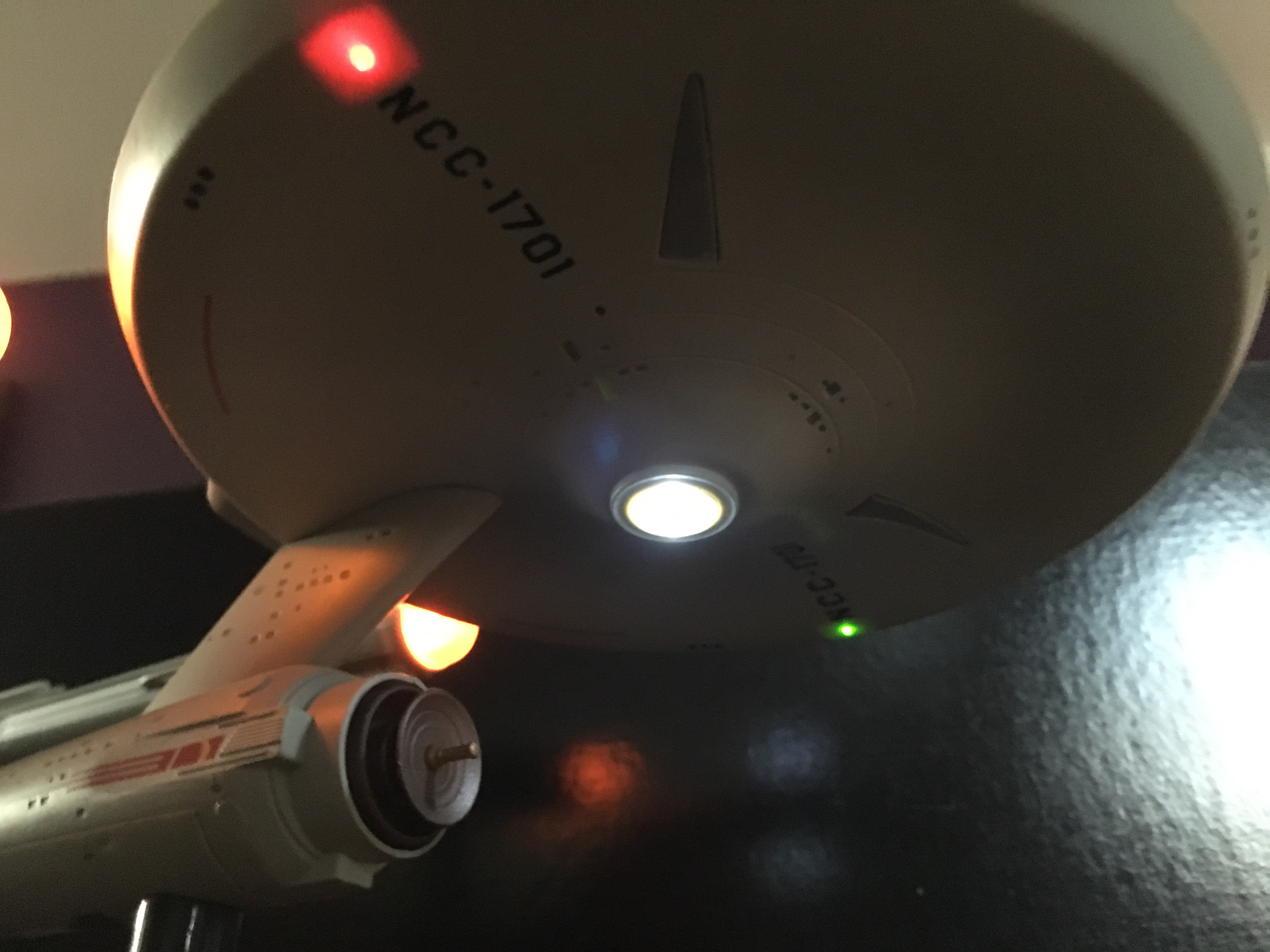 The battery-operated ship — one of a whole fleet produced by Diamond that crosses eras and also covers enemy warships — is about 16 inches long and perches on a stand that’s included. The stand is a little balky, so be careful. It’s not difficult to tip the ship over. .

(UPDATED: I’m happily informed that if you hold down the bridge button for several seconds, the lights go on, with noises. Push it again and the noises turn off, leaving just the lights. Push it again to them turn off. It’s evidently in the instructions but I let a crewman put mine together instead of Scotty, so there you have it.)

But that’s the only thing that keeps this $65 item (list price) from hitting full warp speed across the galaxy. 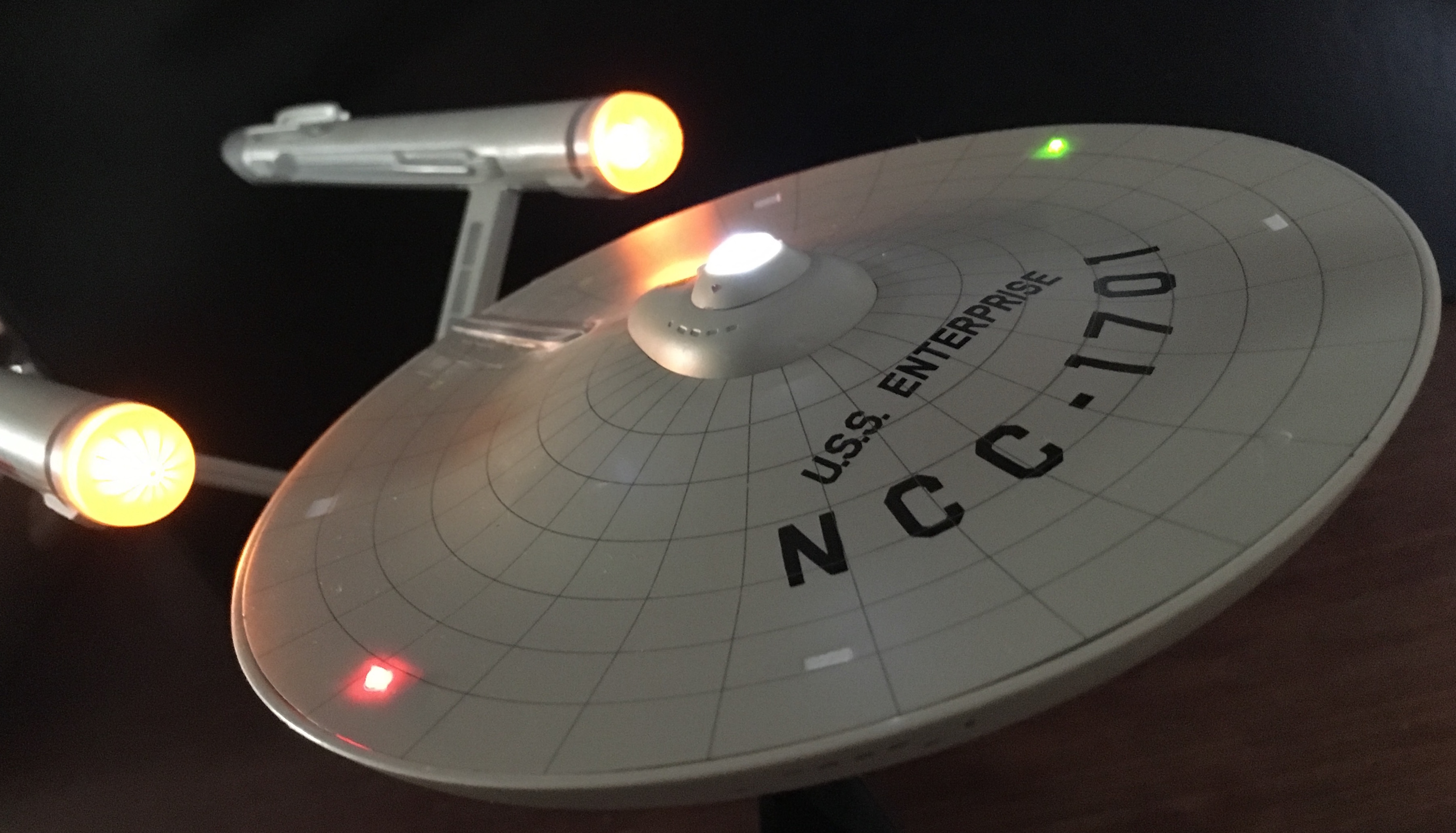 TREK TUESDAYS CAPTAIN’S LOG, SUPPLEMENTAL: A couple of weeks ago, I interviewed Lt. Uhura herself, Nichelle Nichols, over the phone. (Click here). Well, my family and I met her over the weekend at Cliff Galbraith’s East Coast Comicon and she was as lovely and gracious in person as she was over subspace frequencies. 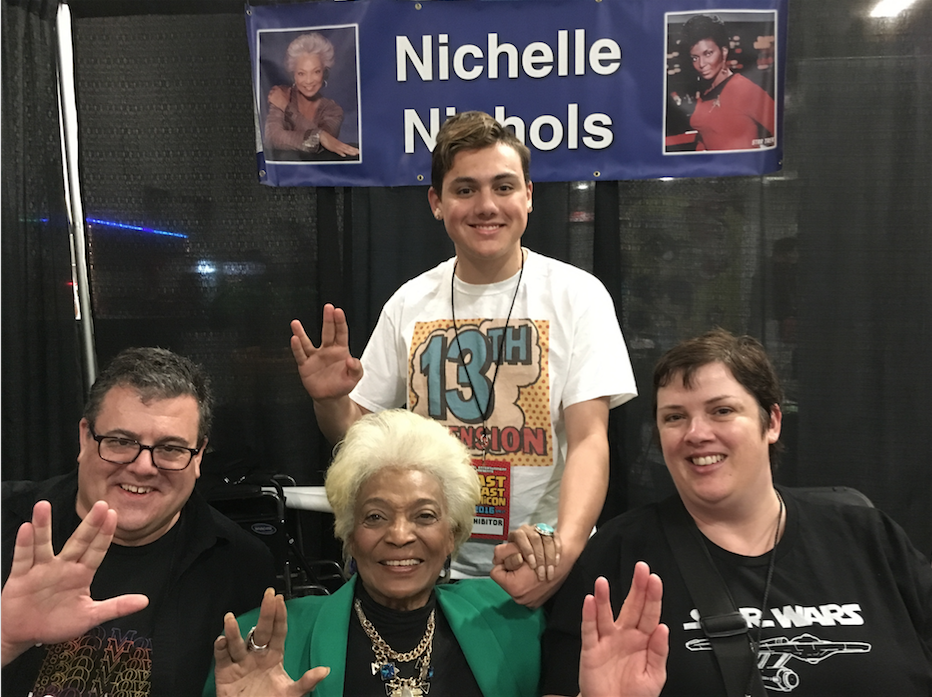 The good lieutenant with me, my son, Sam, and my wife, Wendy.