This Mini BATMAN ’66 TV Offers a Batcave Full of Fun

REVIEW: Tiny TV Classics takes you back to 1966…

Over the last seven or eight years since the Batman ’66 license was made available to manufacturers, we’ve seen a metric ton of Blu-ray sets, action figures, statues, apparel, comics, books, props, costumes, you name it. Basically, if licensees could find a way to create groovy Batman goods, they have.

Now, it’s all come full circle: Basic Fun! this summer began releasing what it calls Tiny TV Classics — miniature television sets that play clips from some of the most popular shows in history, such as Friends, South Park and, yes, Batman ’66, with many more to come.

So, for example, even if you own Batman on home video, you can now get a miniature ’60s-style television that plays brief, pre-selected segments:

Like the other models, the Batman ’66 TV stands only a couple inches high, comes with a remote controller, a stand-up background — in this case the Dynamic Duo (Adam West and Burt Ward, natch) in the Batcave — and plays roughly 10 clips.

The Batman TV itself looks like it was yanked straight from a mid-’60s living room. Only the avocado carpeting and folding TV dinner trays are missing. 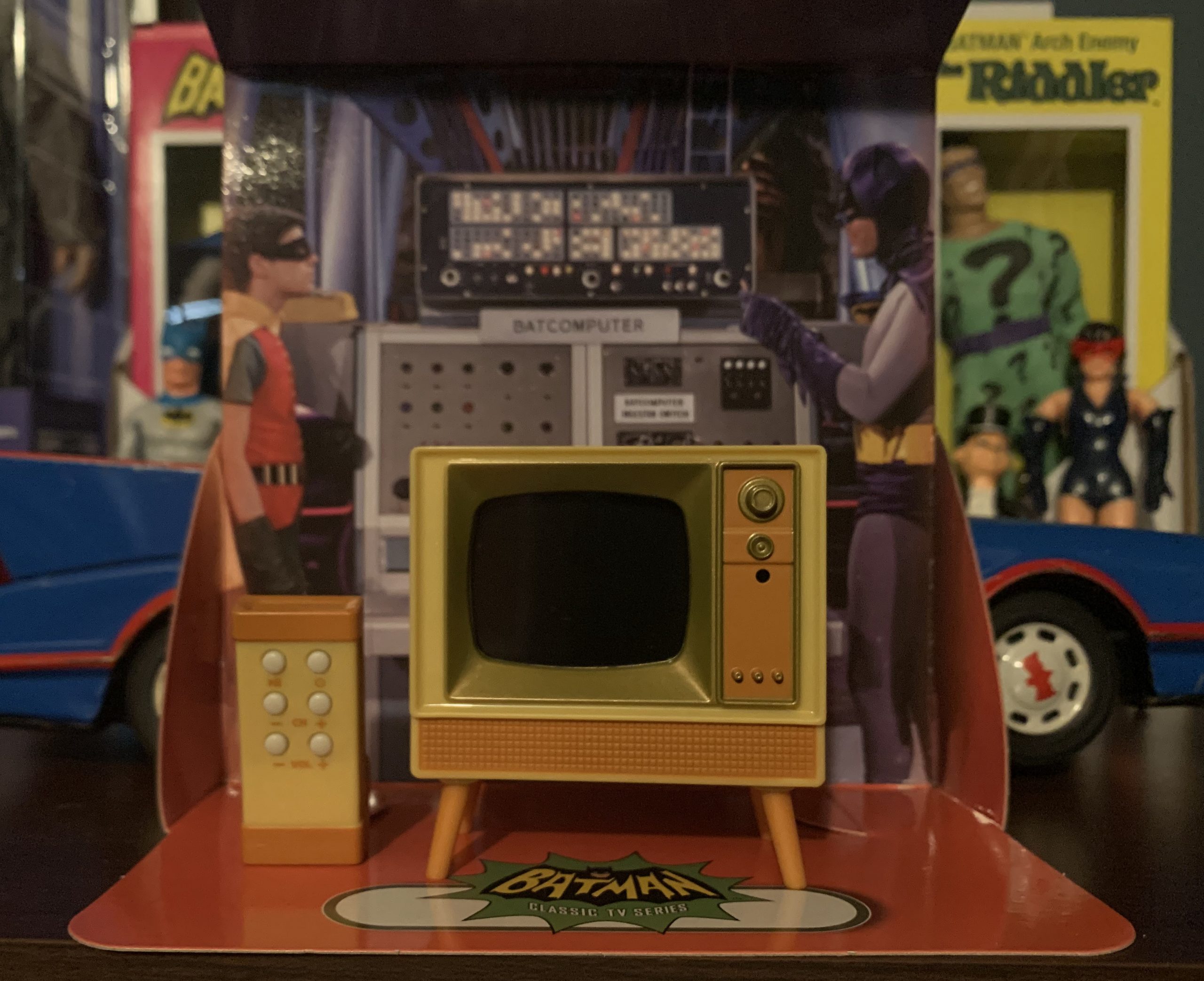 The style of TV set and other minor features match each show’s era. For the Batman edition, there are lovely little details like an old-fashioned test pattern — and the TV turns off with a white little dot in the center of the screen, just as in the olden days. 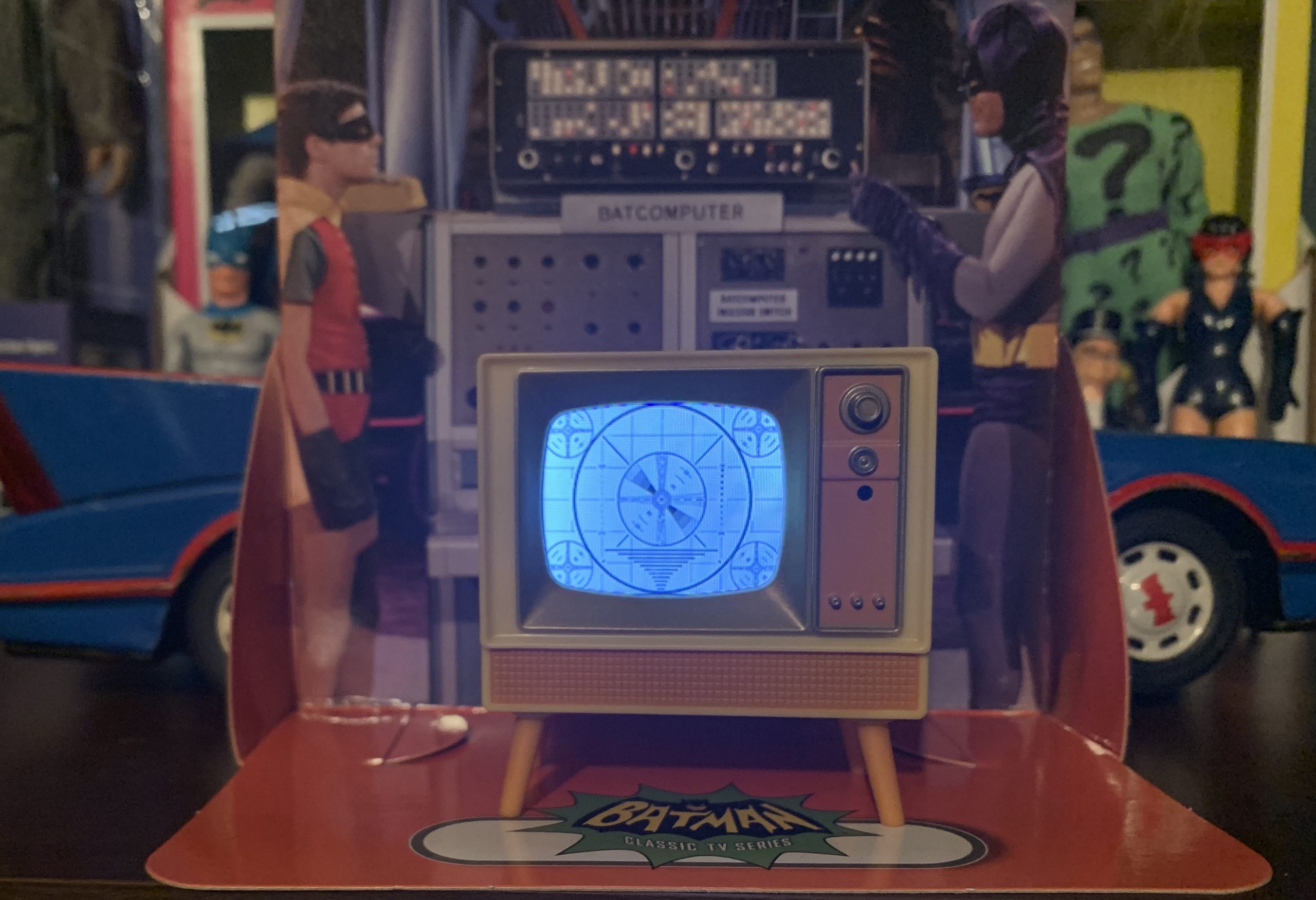 You can either let the clips play in order or you can use the remote to “change channels” and move to the next segment. (Each segment is maybe 10-15 seconds.) The clips themselves are fairly random and run out of context — which makes them even funnier.

Here are just a few examples: 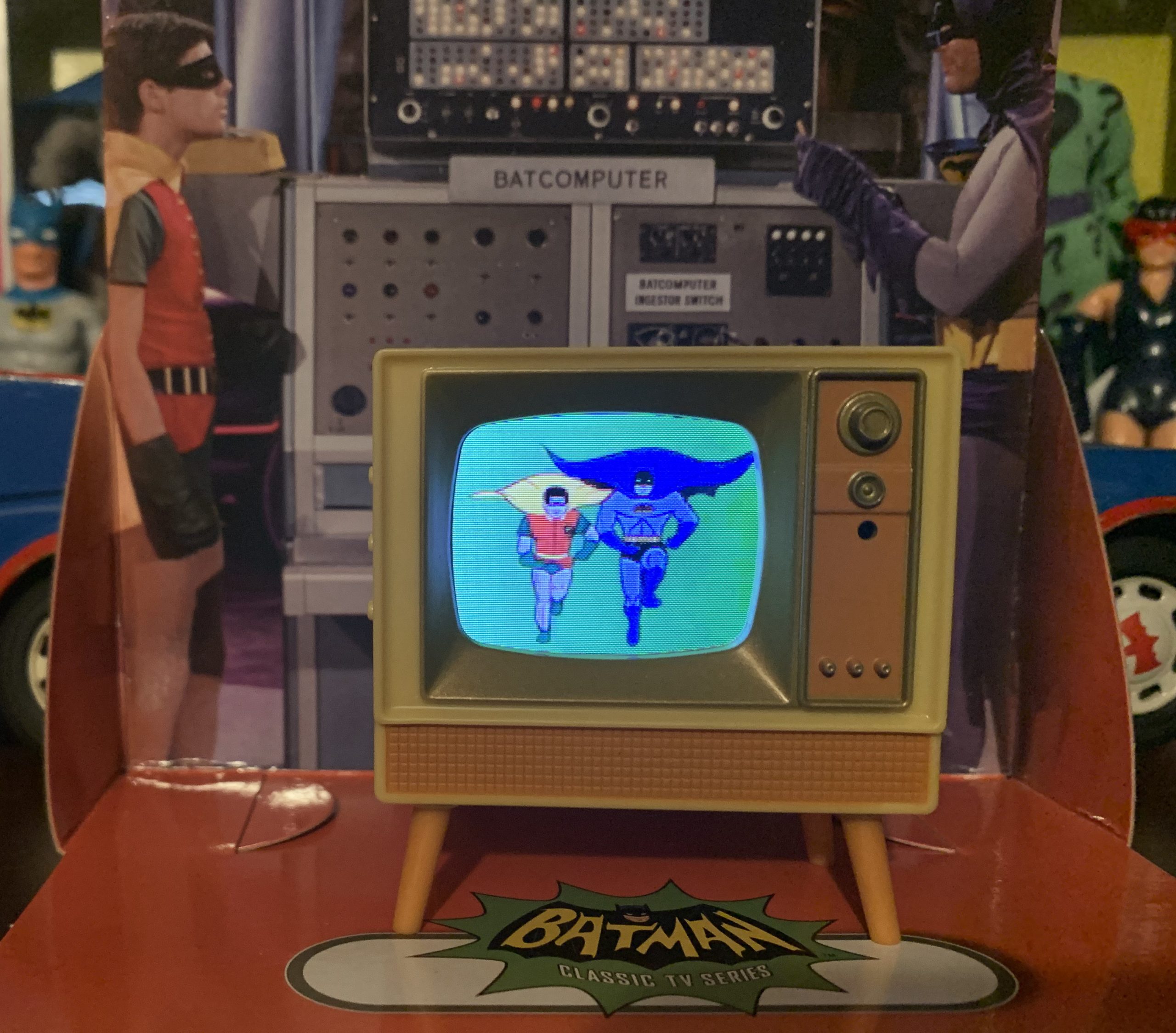 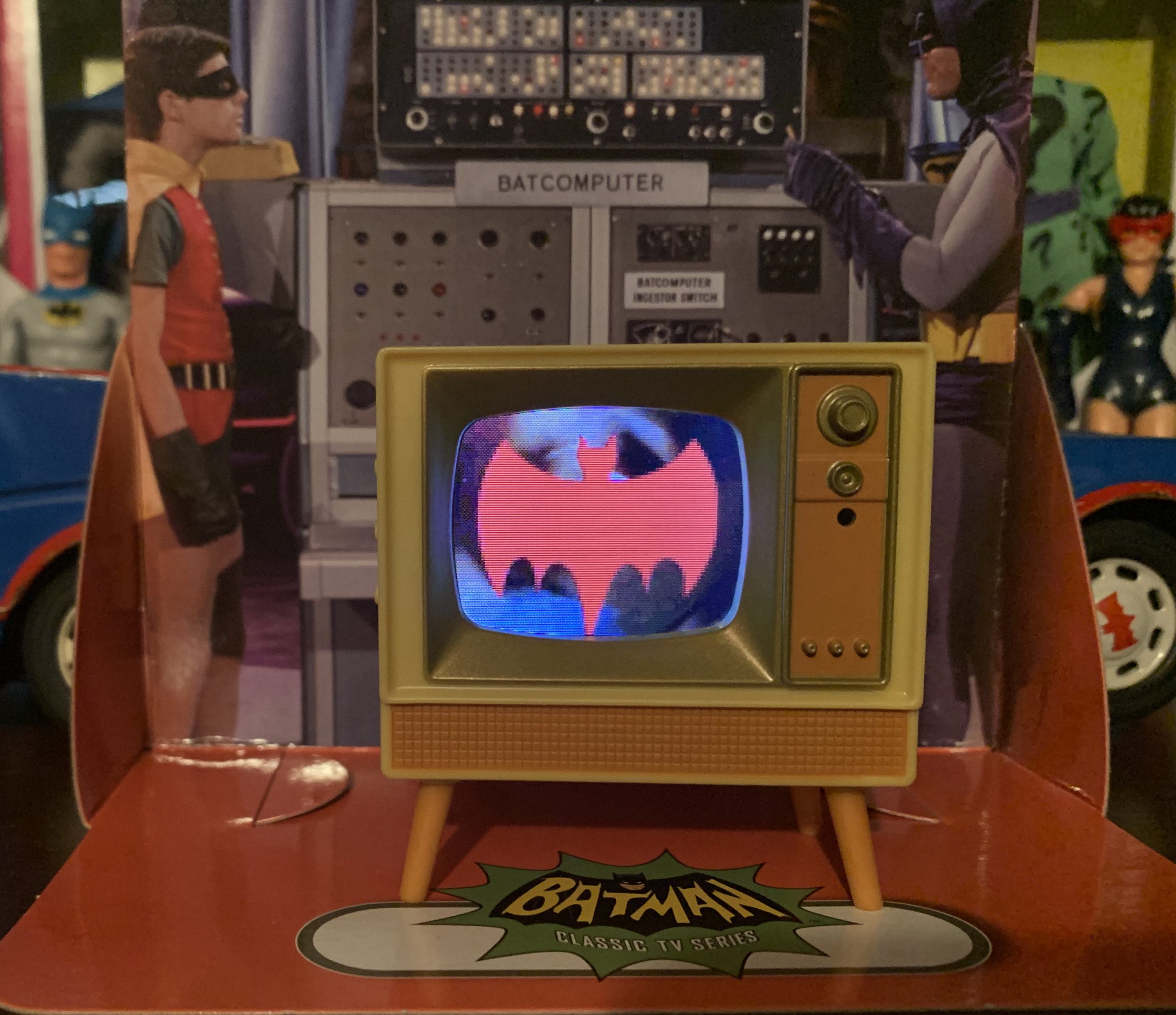 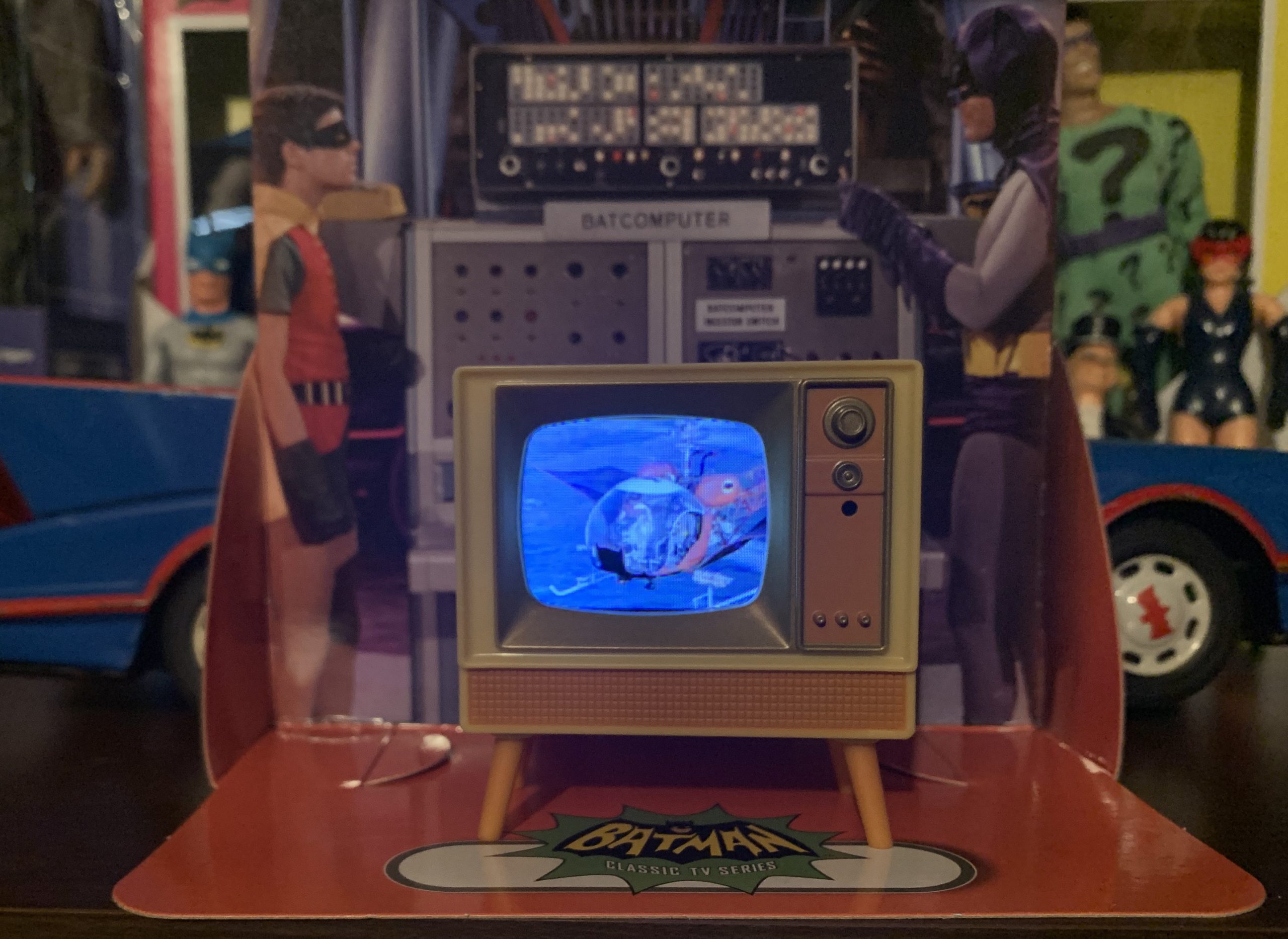 Another wave is coming in October, including Family Guy, The Big Bang Theory, Bob’s Burgers — and one I’m especially looking forward to: the original Star Trek. (Both Trek and Batman are celebrating their 55th anniversaries this year, as it happens.)

Each set comes in colorful packaging and lists for about $25. They’re available at Walmart — but that’s the rub: They’re already sold out at the box store’s website and if you don’t shop at their brick-and-mortar locations, you’re beholden to the secondary market; right now, the Batman sets are going for about $50-$100 on eBay. That’s not cheap. 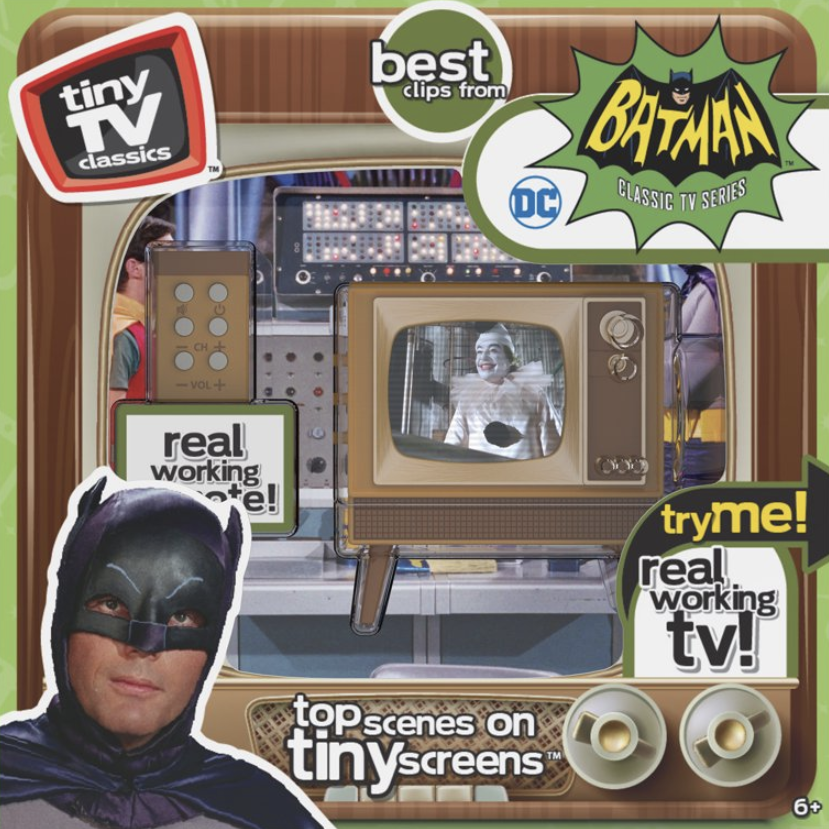 So that begs the question: Is this worth it? And the only person who can really answer that is you, based on your own finances and desires.

For me, the price is steep but worth it in the $50 arena only because it’s such a goofy, kitschy item and dammit if it doesn’t make you smile and giggle to yourself when you play with it.

And with the way things are these days, that in itself makes it worth every penny.