The Weirdest BATMAN Cartoon of the ’60s

Home » BATMAN'S HOT-LINE » The Weirdest BATMAN Cartoon of the ’60s

John S. Drew and I have been reviewing all of the groovy ’60s Batman cartoons from Filmation — and even the not-so-groovy ones — over at his Batcave Podcast.

In our most recent installment — which you can listen to here or check out on iTunes — we happened upon The Great Scarecrow Scare.

Now, what’s notable about this single-segment episode — which first aired Nov. 9, 1968 — is that it’s the first time the Scarecrow was presented before a screen audience. The villain, after all, had been only recently revived in DC Comics after decades of dormancy and was never featured on the 1966 live-action show. 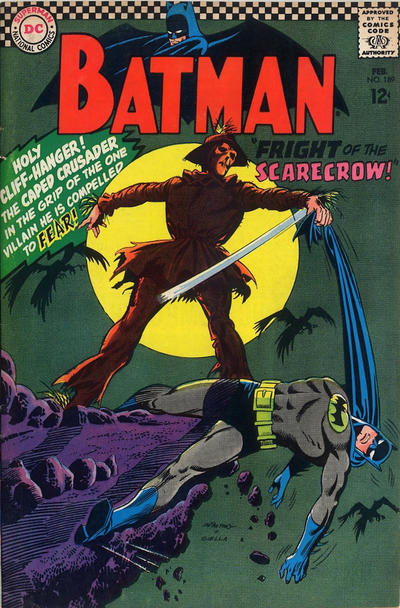 Cover-dated Feb. 1967 — the month I was born! Art by Carmine Infantino and Joe Giella.

But a funny thing happened on the way to Saturday morning: Filmation completely remade the character, eschewing his fascination with fear and replacing it with a fixation on … farming.

As in, Old McDonald. With a cluck-cluck here and all that.

It is, when you step back, a really strange episode. 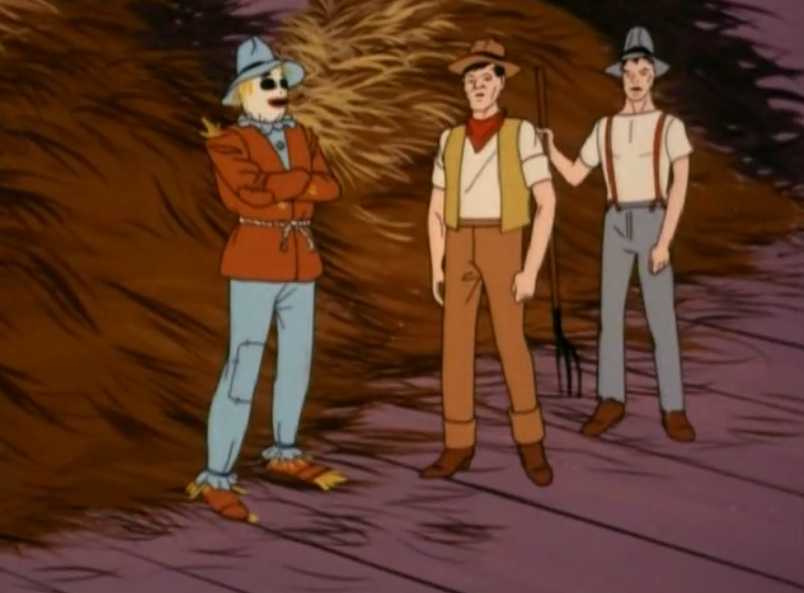 Scarecrow and his farmer henchmen.

Seriously, the Scarecrow’s big scheme — utilizing various agricultural gimmicks and equipment — is to rip off Gotham’s wholesale produce market. And bump off Batman, Robin and Batgirl in the process. (Scarecrow even makes an off-putting reference to spanking Robin.) Without giving too much away — though you can’t really spoil a 49-year-old cartoon — the climactic Batfight takes place at the Scarecrow’s hideout on a farm in Gotham’s ag district. 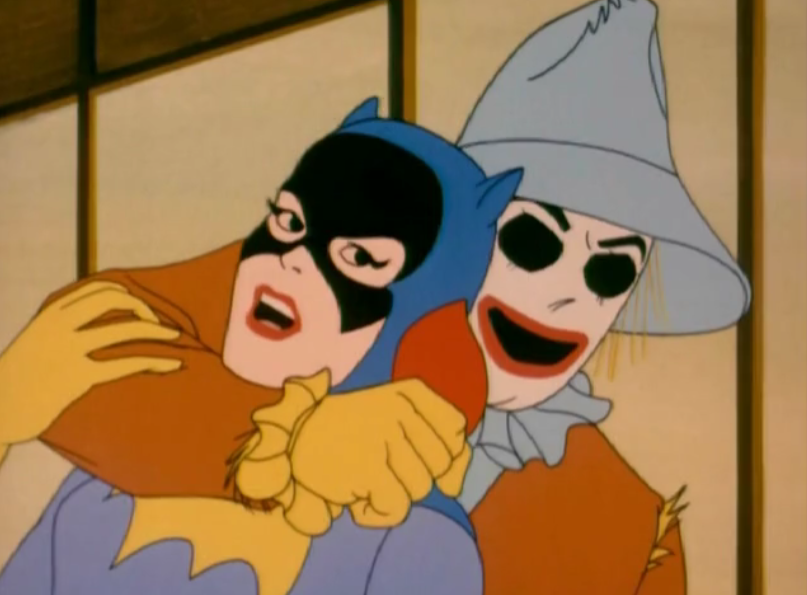 I suppose the Scarecrow looks enough like the classic version, save for a more colorful costume, but that’s not difficult. Jonathan Crane does typically dress up like a quintessential scarecrow.

Then again, his mask is really creepy — for all the wrong reasons: 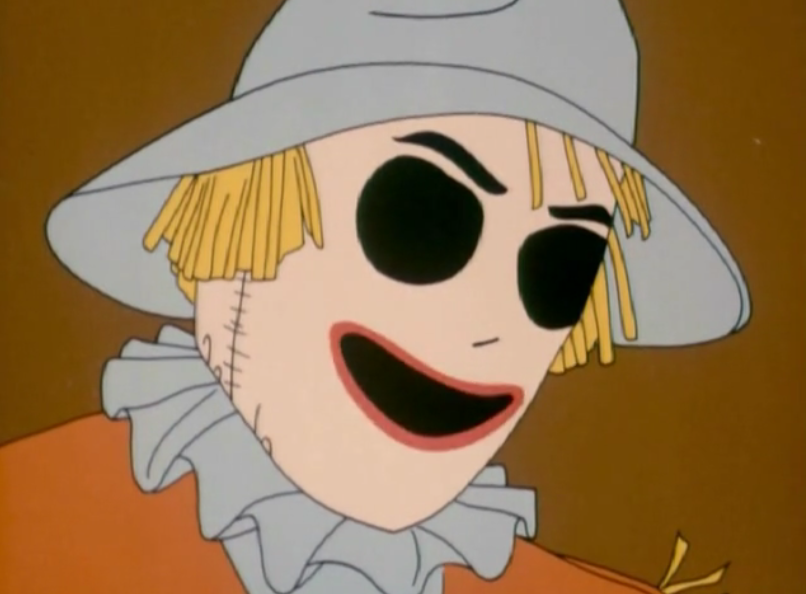 His voice, provided by Ted Knight, is not the haunting vocal you’d ordinarily expect. Rather it’s a high-pitched, shriekier version of Knight’s Penguin and it’s out of place regardless of whether the Scarecrow wants to make you scream with despair or, I don’t know, raid your refrigerator.

The episode’s writer was Bill Butler and I have no idea if he was completely mistaken about what made the Scarecrow tick or whether producer Lou Scheimer and his crew were leery about having a villain who lived to terrorize Gotham in general and the Dynamic Duo in particular. 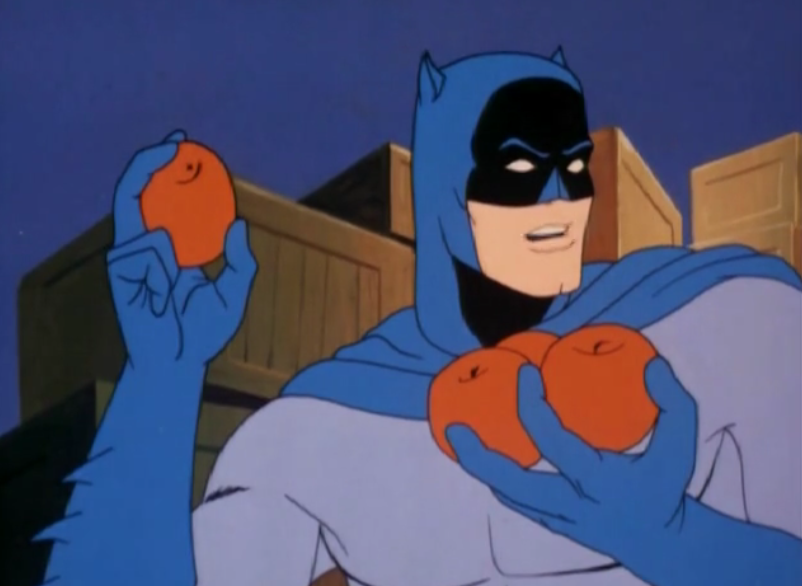 Both are plausible explanations, I suppose, though I can’t see where having a bad guy who liked to frighten people was any more edgy than what Batman’s other baddies were up to in Filmationland. They definitely could have gotten away with it. After all, Scooby-Doo — co-starring Voice of Robin Casey Kasem — was just a year away from Hanna-Barbera. 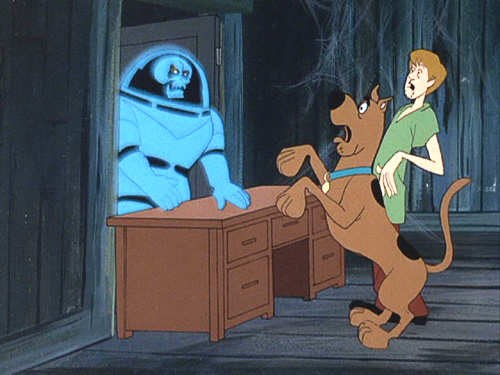 That’s not to say The Great Scarecrow Scare is a bad episode. It’s not. It’s appropriately kitschy in that charming Filmation way, with a cool fight scene, a number of nifty moments given its 6:45 run time, and the requisite lapses in logic.

It just stands out for being an especially weird episode in a series that featured many weird moments. 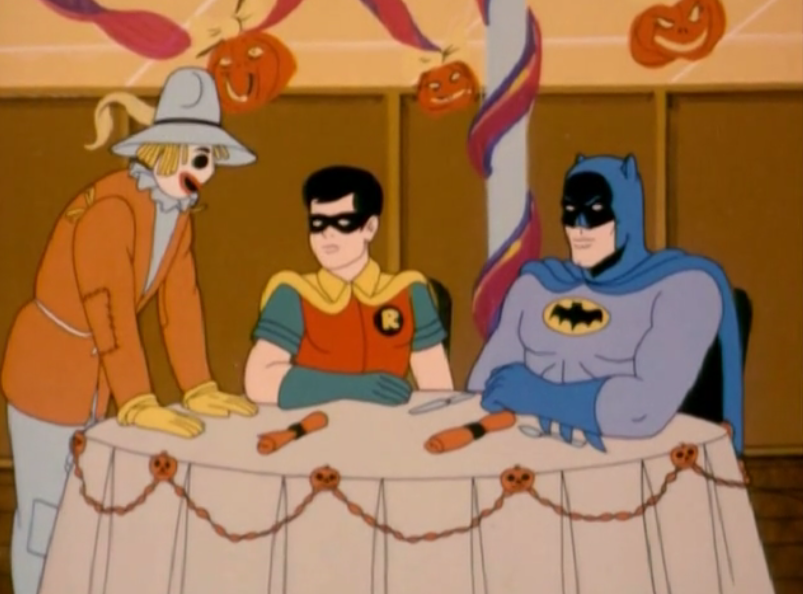 The Adventures of Batman is available on DVD and digital download.

MORE: For the FILMATION BATMAN Index of features, click here.