Whether you’re talking Silver, Bronze or even Modern Age, the Titans have always looked cool, sporting some of the niftiest threads in all of comics. 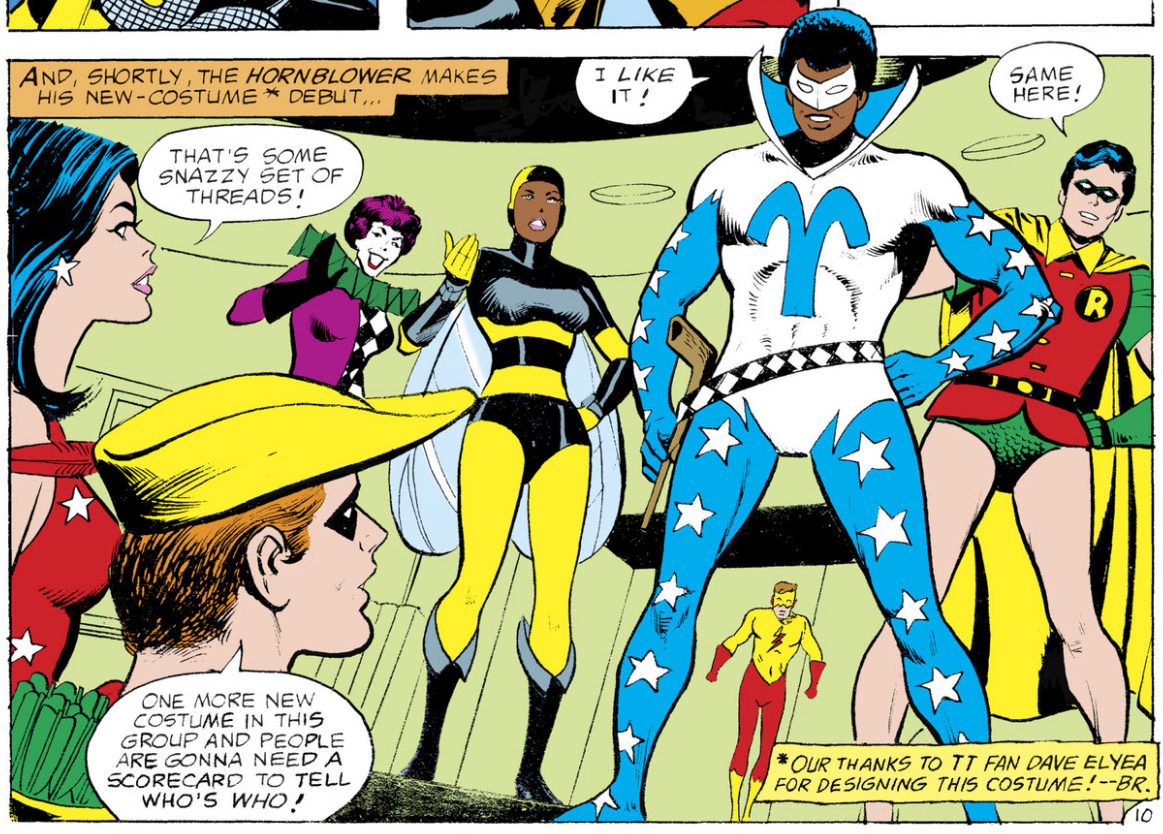 13. The Mad Mod. You can’t talk about Teen Titan designs without mentioning one of their earliest foes, the Mad Mod. First appearing in Teen Titans #7 (during the swinging’ 60s, 1967 to be specific… which is also coincidentally my birth year), the Carnaby Street fashion designer formerly known as Neil Richards, was a creation of (Zany) Bob Haney and Nick Cardy. Clad in real gear garb, the Mad Mod was nothing more than a thief but he really epitomized the look of that era. He later reformed during the 1990s Dan Jurgens run and was the designer behind the costumes of that group of Teen Titans (more on that next). He even popped up in the Teen Titans cartoon, voiced by Malcom McDowell. Groovy. 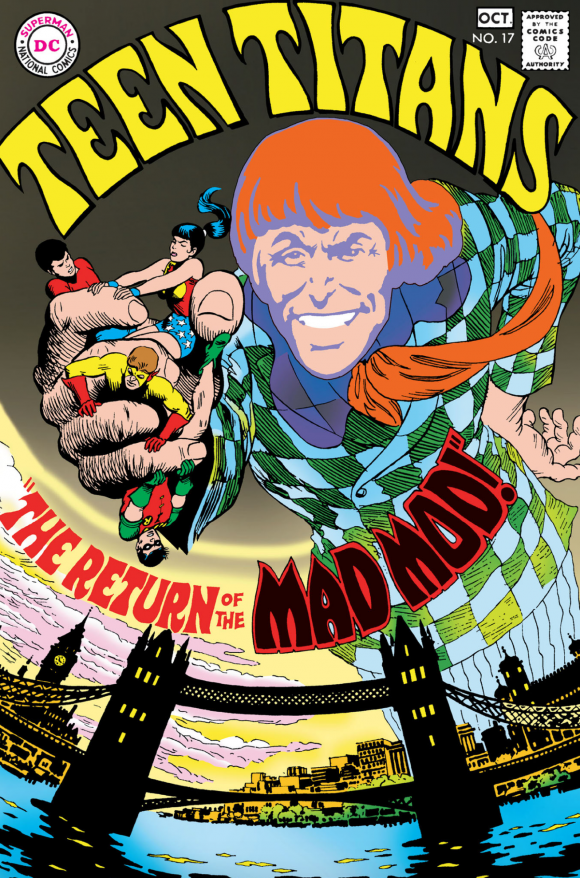 12. Argent. When the Teen Titans idea was dusted off in 1996 by Dan Jurgens, he went with an all-new team (led by a Zero Hour de-aged Atom). Toni Monetti was a half-alien teen living in New Jersey when she discovered she had the ability to shoot plasma based energy beams. With her new silver skin and low-cut black costume, accented with primary-color “wing” extensions, Argent was the most interesting of the new heroes and the one with the most longevity. She too popped up in the Teen Titans cartoon, albeit with a more goth-inspired look. 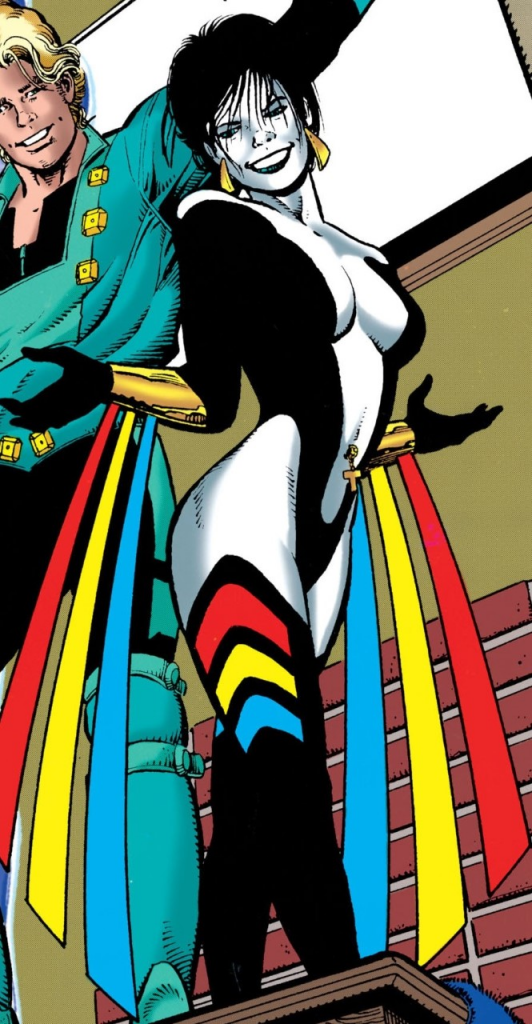 11. Raven. Speaking of goth… Created by Marv Wolfman and George Perez, Raven, the daughter of Trigon, was the catalyst for the formation of the New Teen Titans back in 1980 (DC Comics Presents #26). And while her demon daddy looked a tad ridiculous with his four eyes and antlers, Raven made up for it with a dark blue hooded cape ensemble that resembled a raven’s silhouette, even when she wasn’t using her “soul-self”, which took the shape of giant raven shadow. And though she wasn’t portrayed as overtly sexy as her teammate Starfire, there was something striking about Raven. Just ask Wally West, who fell for her at first sight. Even though there was definitely some hocus-pocus going on in that department. 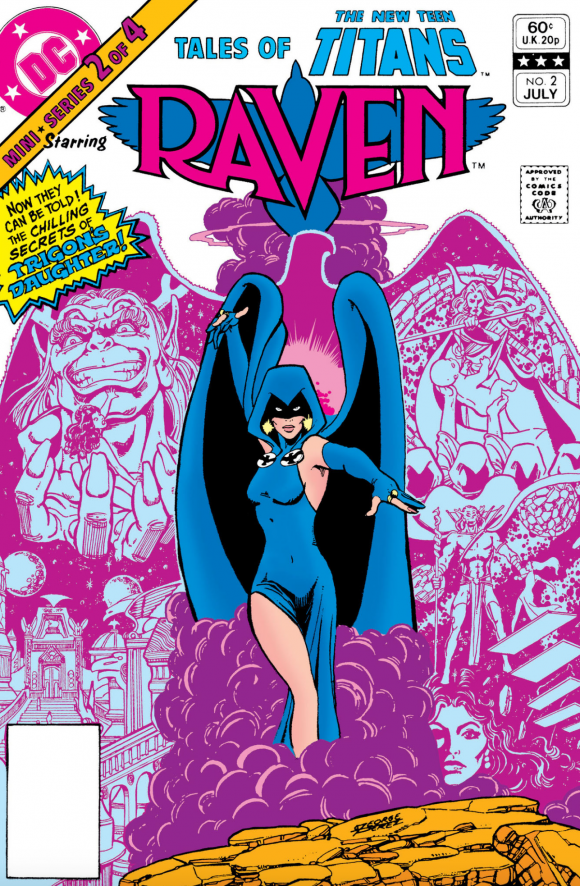 10. Starfire I. Before Princess Koriand’r took the name Starfire, there was another teen associated with the Titans who used it. Leonid Konstantinovich Kovar was a Russian superhero (created by Wolfman, Len Wein and Bill Draut) who encountered the team in 1968 (Teen Titans #18) during the Cold War. Starfire’s costume was typical in that fact that it was skintight with boots and gloves. But it broke the mold with short sleeves, a clasped collar (sans cape), and a nifty pair of green goggles. In fact, the whole uniform was shades of olive drab, with the only break in that color scheme being the red and white star insignia emblazoned on his chest. Kovid would later return as Starfire in 1982 when he appeared, poetically, in The New Teen Titans #18 — after which, he would assume the name Red Star, along with a series of terrible costume changes. 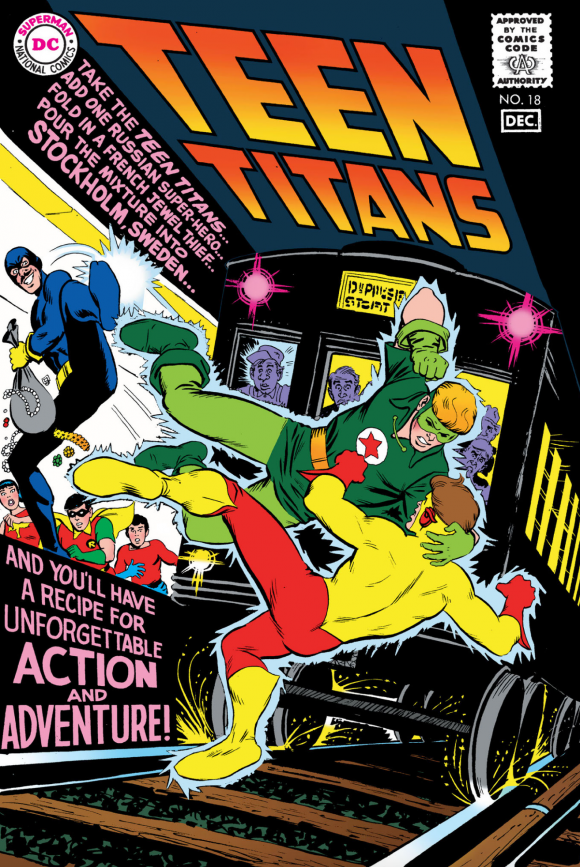 9. Brother Blood. Created by Wolfman and Perez in 1982 (New Teen Titans #21), Brother Blood was a seemingly ancient cult leader. In actuality, each Brother Blood lived for 100 years before being killed by his son, who inherited the mantle. Kind of like the Phantom, only not evil, and without the patricide. The modern day Brother Blood was the leader of Zandia and looked more like a super-villain than an ancient priest. A red and blue-black costume covers his entire body, while a face mask covers everything but his lower jaw. Atop his head is the remnants of an animal skull and his high collar also serves as a clasp for the prayer shawl of Christ (the secret of his immortality and invulnerability) that is part of his white cape. And as outlandish as that all sounds, this was the best look for the character as subsequent versions were not as dynamic and sinister. 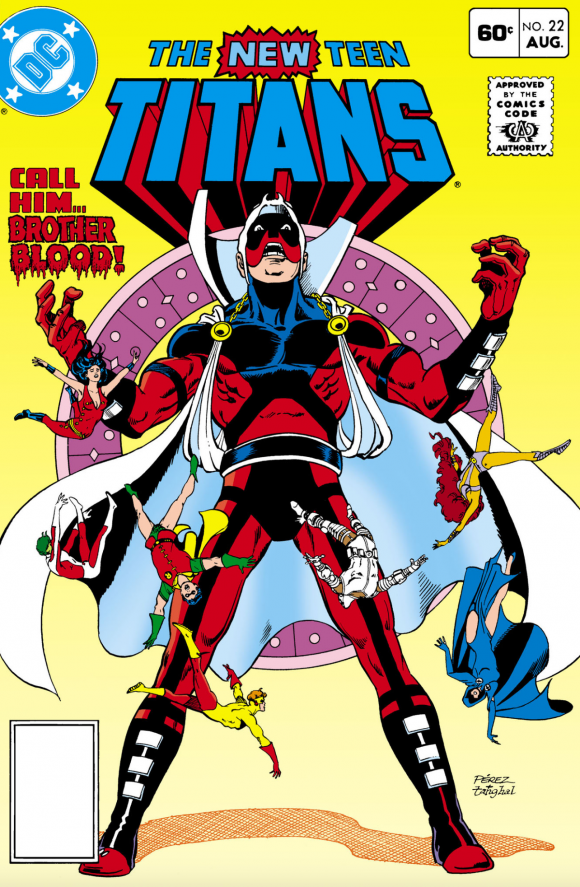 8. Flamebird II. The aftermath of the Crisis on Infinite Earths posed a little bit of a problem for some of the former Teen Titans. With the merging of all remaining earths and respective histories into one, many heroes and villains were rebooted rather than just denied their former existence. Such was the case with the original Bat-Girl (notice the hyphen?), Betty Kane. Under the pen and pencil of George Perez (in Secret Origins Annual #3, 1989), the new Bette Kane was a super-hero known as Flamebird and had a crush on Nightwing (Dick Grayson, formerly Robin), as a nod to the pre-Crisis Nightwing and Flamebird team of Superman lore. While maintaining the basic colors of the pre-Crisis B-G costume, the new Flamebird is all fire and no bat. In typical Perez fashion, it’s a busy costume that other artists probably cursed him for. But it’s a hot design nonetheless.

7. The Hawk and the Dove. The yin and yang of the Teen Titans. Created by Steve Skeates and Steve Ditko, brothers Hank and Don Hall were the epitome of pro-war and pacifist politics during the Vietnam era. First appearing in Showcase #75 (1968), Hawk and Dove eventually joined the Teen Titans briefly in 1970, later serving with Teen Titans West in 1977. The Ditko-designed costumes are, um, well, pure Ditko. Much like the Creeper, Spider-Man and Blue Beetle, you know just by looking at them that they were created by Sturdy Steve. They’ve stood the test of time — so much so that later incarnations of Hawk and Dove (who was bumped off and replaced by a woman) still stick to the same basic look. 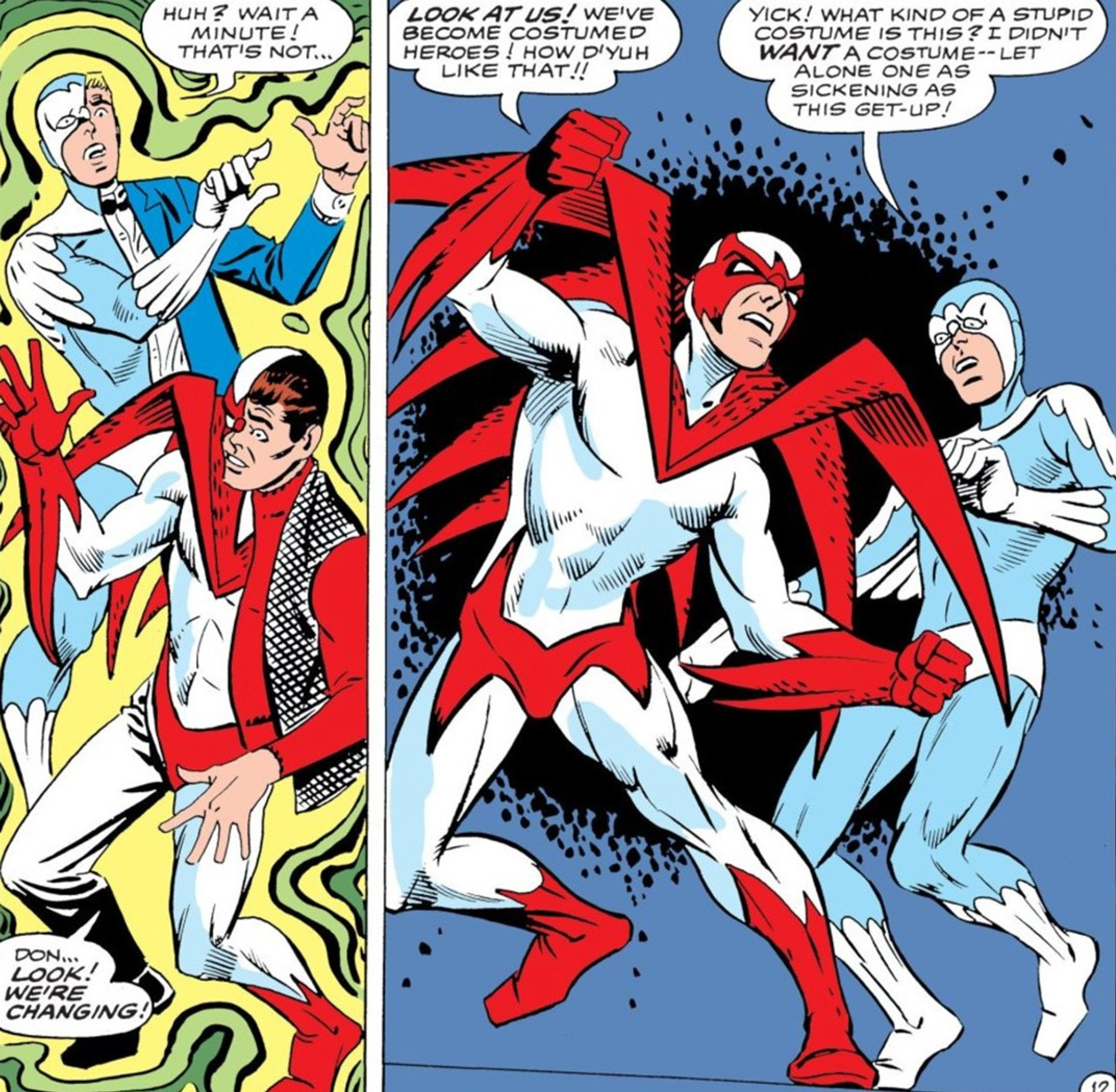 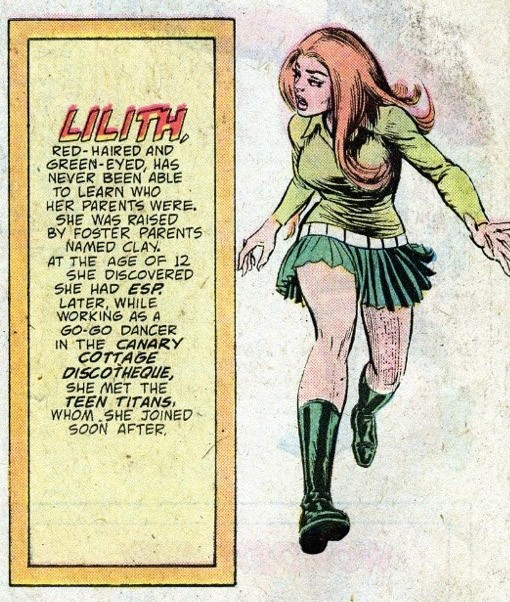 5. Starfire III*. According to co-creator Perez, he was thinking “Red Sonja in outer space.” And that works. First introduced by Perez and Wolfman in 1980 (DC Comics Presents #26), Starfire was one of three new characters created for the (New) Teen Titans revival. With her metallic purple bikini and (flaming?) auburn hair, Princess Koriand’r looks like she’d be more at home as a member of the Bronze Age Legion of Super-Heroes. But it’s that very fish out of water aspect that makes her such an important part of the New Teen Titans foundation, cheesecake or not. In fact, she’s still around in various versions (who can keep track?) of the Teen Titans/New Teen Titans/The Titans, even if they’ve toned down her original costume to make it less revealing. 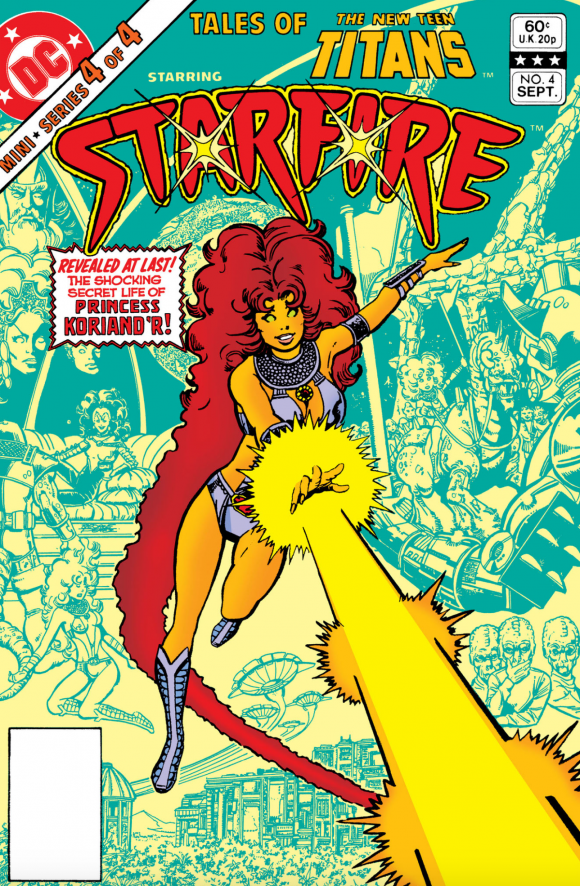 (* Yes, III, You didn’t forget the non-Titan sword-and-sorcery space warrior created by David Michelinie and Mike Vosburg, did you?)

4. Deathstroke the Terminator. First appearing in New Teen Titans #2 (1980), Deathstroke the Terminator (yes, he predates the Schwarzenegger character by four years), bears a striking resemblance to a similar assassin over at Marvel Comics, the Taskmaster. That’s because both were designed by George Perez. However, Perez just designed the characters; their identical color schemes are the unintentional result of the colorists. Nevertheless, Perez kicked it up a notch and although he doesn’t have a skull mask like his predecessor, Deathstroke’s mask is just as intimidating because he only has ONE EYE. An assassin with acute reflexes and marksmanship with only ONE EYE. That’s badass. The rest of the costume, with the chain mail, buccaneer boots, and assorted weapons (grenades, sword, power staff, guns) isn’t too shabby either. 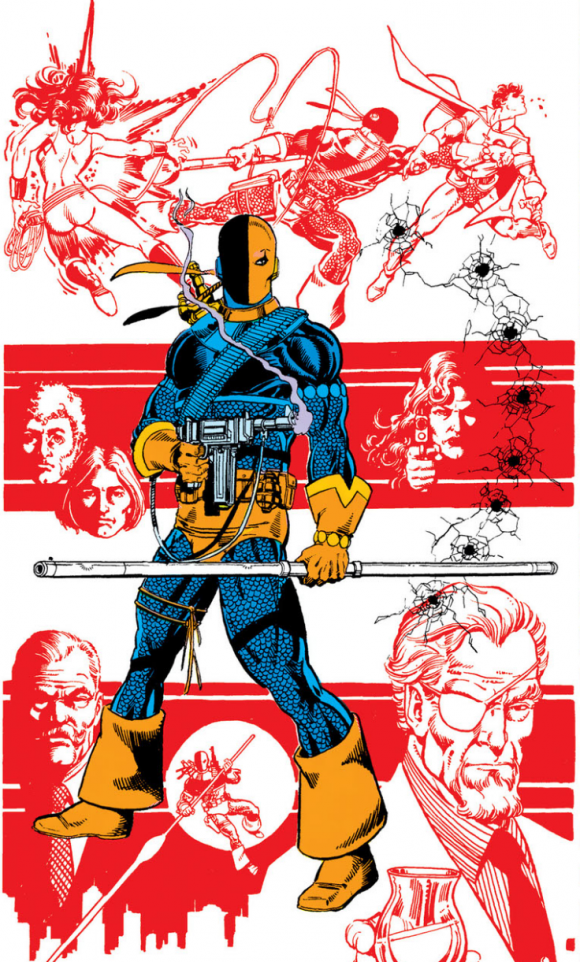 3. Nightwing. The original Dick Grayson costume (you know, he used to be Robin the Boy Wonder) is one you either love or you hate. I’m in the former camp. Dubbed Disco Nightwing long after disco was dead, the suit was originally (pre-Crisis) an homage to the Nightwing of Kandor (Superman’s alter ego whenever he’d visit the bottle city with Jimmy Olsen, aka Flamebird). Unlike later, simplified costumes, this Nightwing suit really enforces the circus acrobat background of Master Grayson. In addition, it’s a better color scheme to be running across rooftops with Batman and, above all, it doesn’t have elf booties. 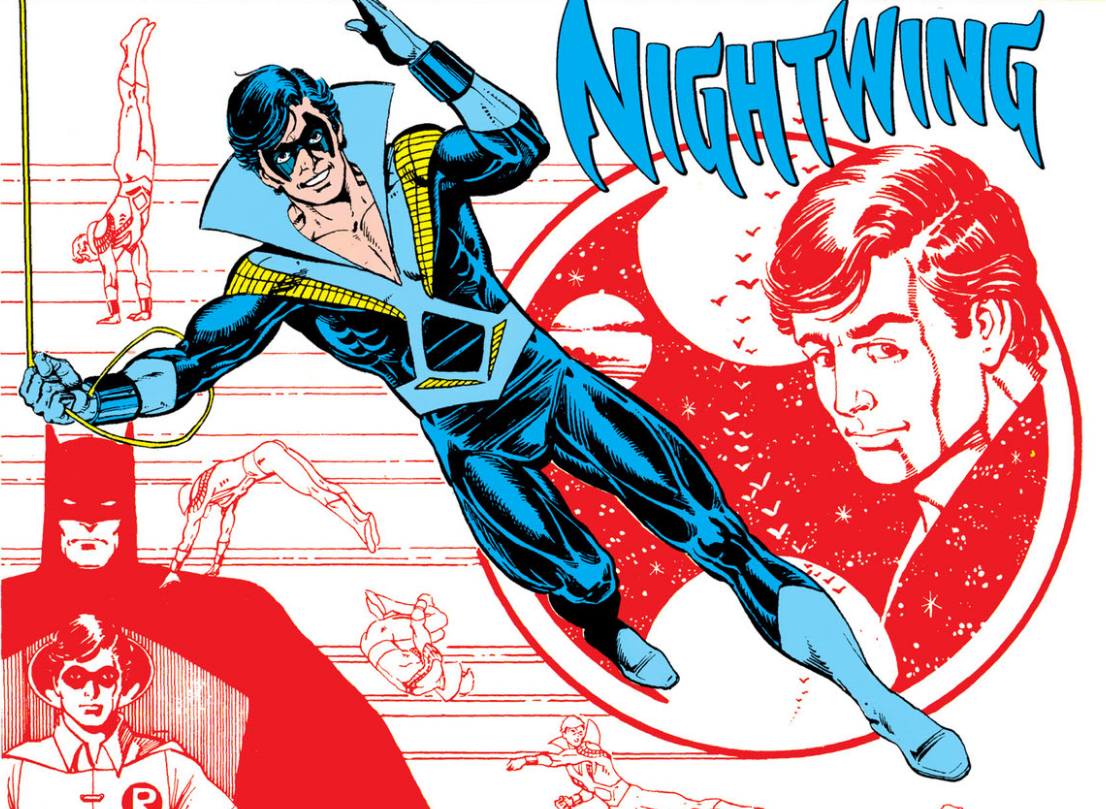 2. Wonder Girl. Back off tigers, you just hit the jackpot! Wonder Girl (Donna Troy) was all grown-up when she ditched the junior Wonder Woman outfit at the end of Teen Titans #22 (1969) in favor of a star-spangled Gil Kane/Nick Cardy creation. Putting the voom in the va-va, this Wonder Girl was stepped out of the shadow of her mentor, whereas her male counterparts were still wearing their replica suits and short pants for another 10-15 years or so. Well, all except for… 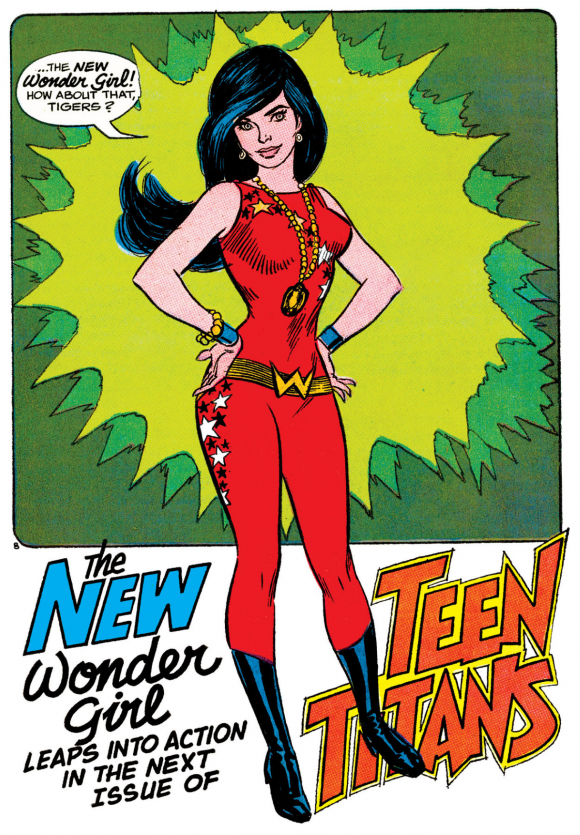 1. Kid Flash. One of the greatest costume re-designs of all-time (by Carmine Infantino, first appearing in 1963’s The Flash #135), Wally West’s second super-suit takes his mentor’s original outfit (no slouch itself) and improves upon it. Alternating between red and yellow, Kid Flash’s costume set him apart from the Flash when they were running side by side, making for a great visual of interchanging, lightning-like streaks. It’s this very costume that made me hunt down appearances of Kid Flash in the ’70s, whether it be solo backups in The Flash, Teen Titans spots in Brave and the Bold, or guest starring in Secret Society of Super-Villains. It was that mesmerizing. In fact, the few times I was late for school and had to run all the way, I wasn’t Barry Allen… I was Wally West and I could feel the breeze through the top of my cut-off cowl. 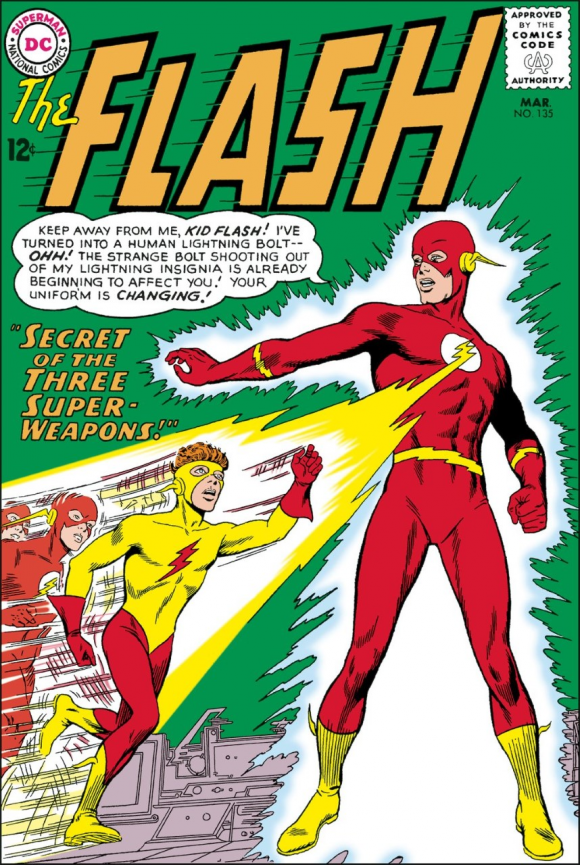