There was no way I wasn’t going to launch this year’s TOYHEM with a column on Mego’s World’s Greatest Super-Heroes line, which is celebrating its 50th anniversary this season. My devotion to the 8-inch figures is well-documented and I can promise we will have other coverage as TOYHEM continues.

But to start I just simply wanted to bask in the Mego aesthetic. In 2017, I ranked the TOP 13 figures — you can click here to check that out — so this time I decided to get granular with THE TOP 13 ORIGINAL MEGO WGSH HEAD SCULPTS — RANKED. Because an action figure’s head can make or break its overall appeal.

Oh, and a very special thank-you to Benjamin J. Holcomb, writer of the book on Mego’s WGSH line — Mego 8″ Super-Heroes: World’s Greatest Toys! (TwoMorrows) and the publisher of World’s Greatest Toys! Digest (the latter of which you can order by emailing Benjamin at benjamin@worldsgreatesttoys.com). He provided most of the photos you’ll see below. 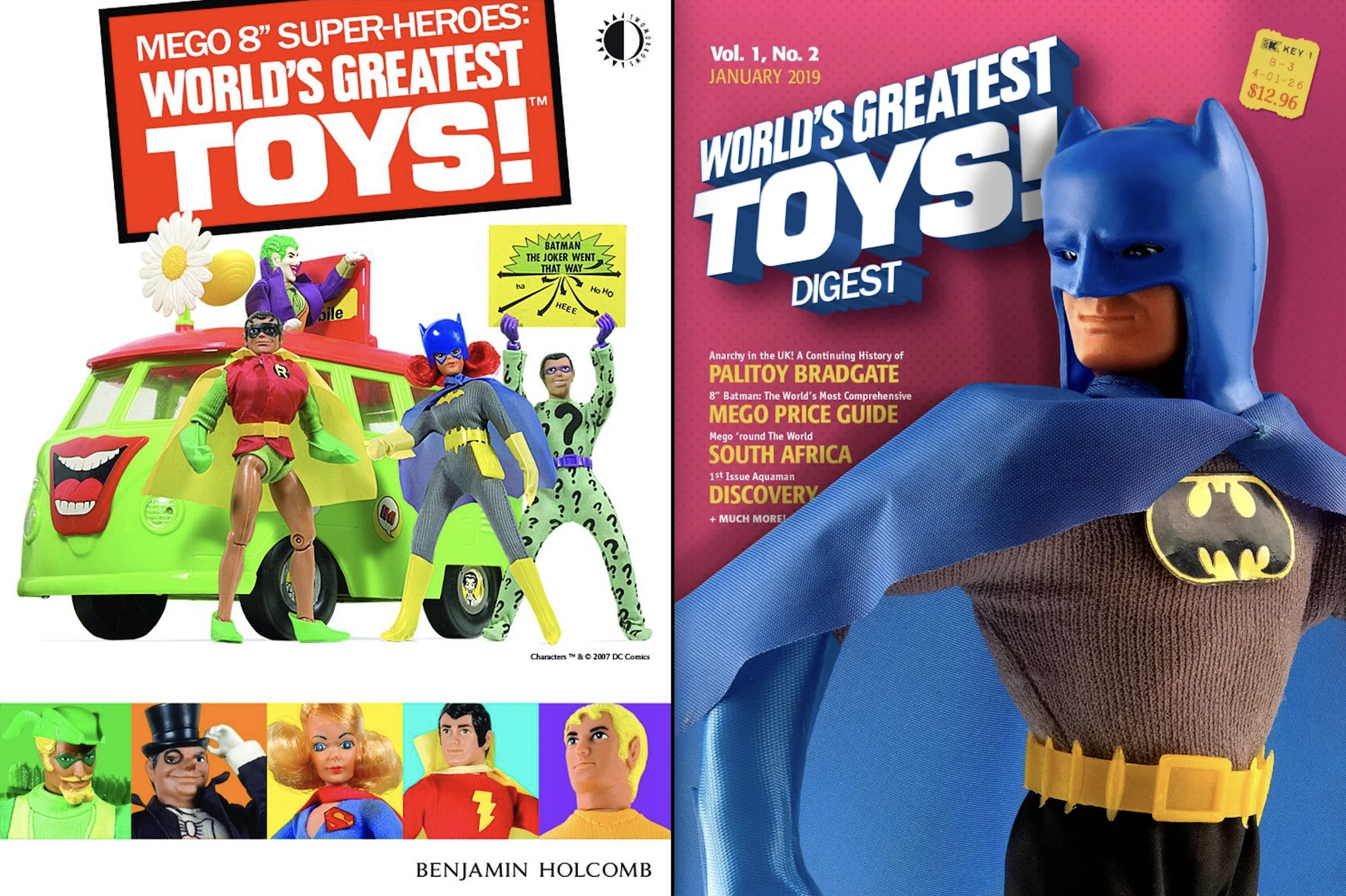 So let’s have at it — and feel free to list your personal faves in the comments!

13. Mr. Fantastic. This one’s for the people: Fans love this head sculpt and I get it — he really looks like Reed Richards in 3D, which is the ultimate goal. At the same time, though, he’s just a handsome silver fox. It definitely works but it’s also a bit mundane when compared to many other designs. 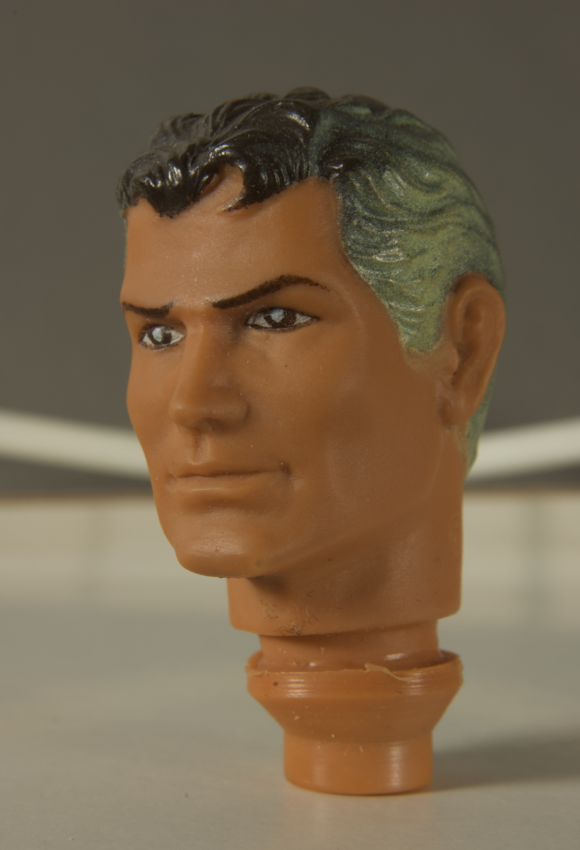 12. Batgirl. Women’s head sculpts were not Mego’s forte. Catwoman was a misfire, Invisible Girl was fine, Wonder Woman and Supergirl had virtually the same face. Batgirl, though, was a little different — cute and goofy (in a good way). To the jaundiced eye, her helmet makes her look like the Great Gazoo and I’m still tickled by the blue mask that remains plastered to her face when you lift off the headpiece. As a kid, I just pretended that they were Barbara Gordon’s glasses. Worked for me then. Works for me now. 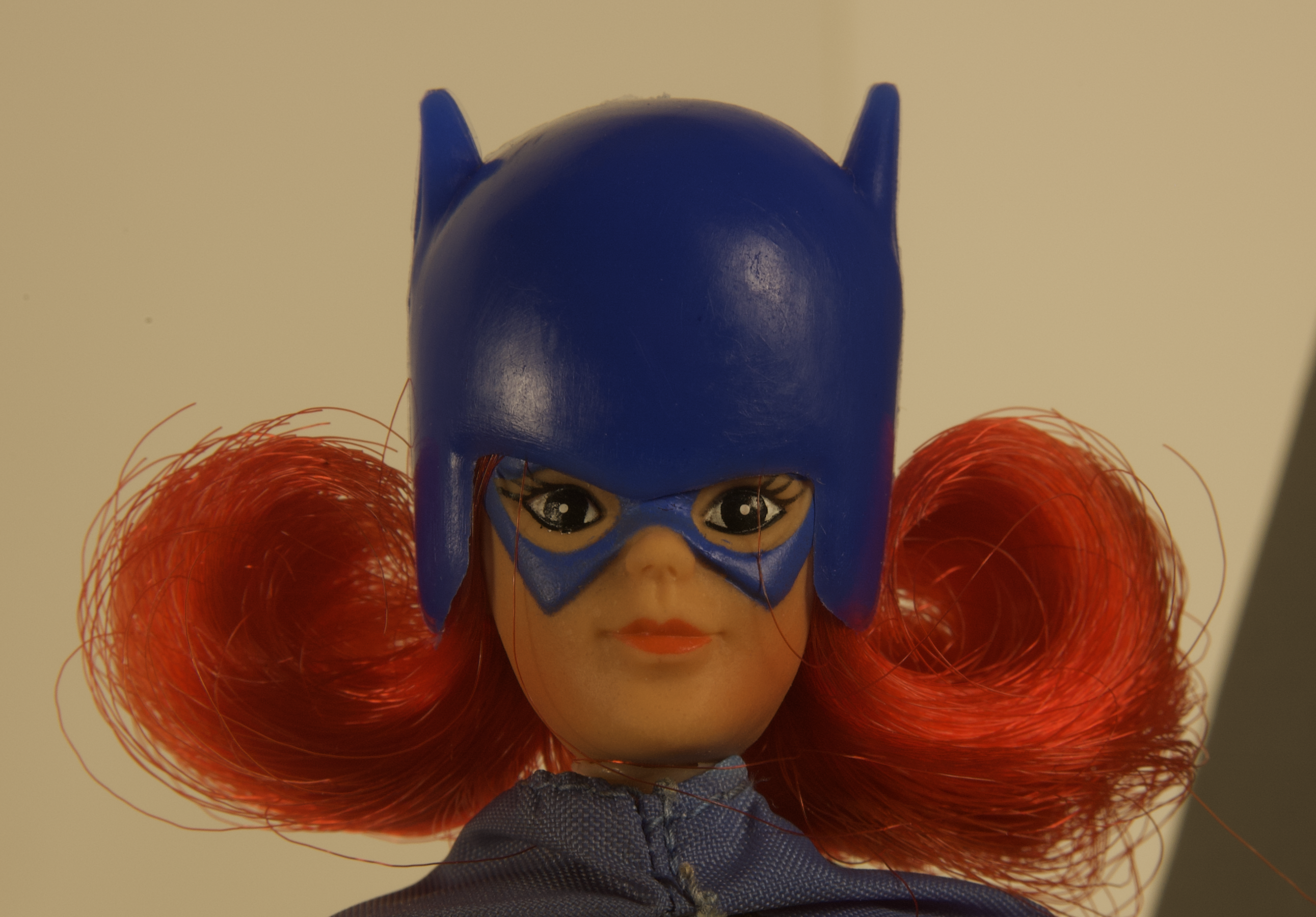 11. Robin (removable mask and painted-on mask). Robin gets a bad rap. For whatever reason, Mego opted to use a look that was about eight years out of date, so 1972’s Boy Wonder seems slightly out of step with his plastic colleagues. (Hence the outpouring of love for modern Mego’s brilliant Teen Wonder version.) But the sculpt is dead-on when taken on its own terms: 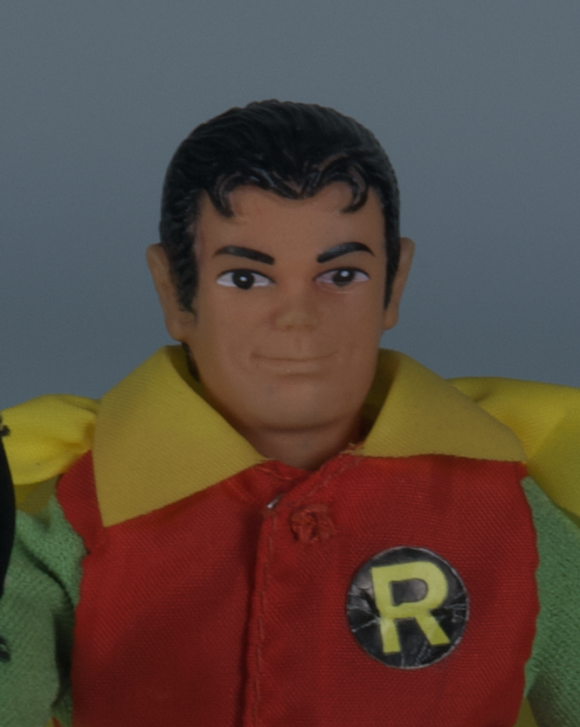 The pleather mask is bulky and generally a bad fit, but Dick Grayson underneath looks like he was drawn by Dick Sprang or Shelly Moldoff. And even though it’s more fun to have a removable mask, the painted version is an elegantly simple upgrade. 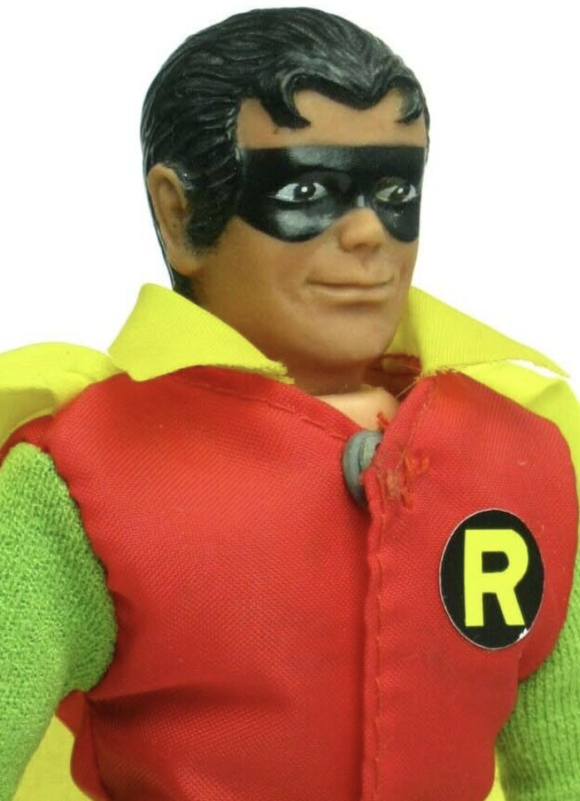 10. Superman. A terrific likeness of the Man of Steel, though, like Mr. Fantastic, he’s not as colorful as others on this list. 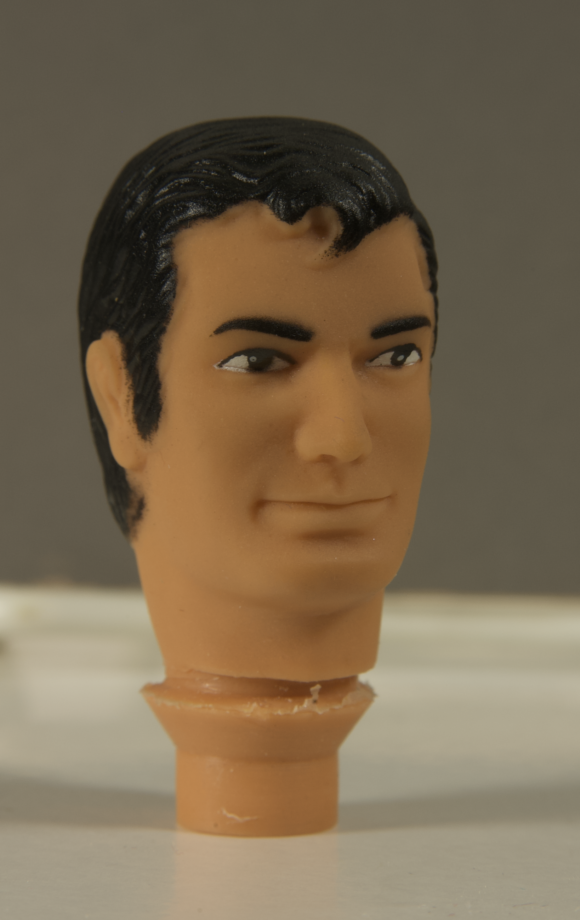 9. The Falcon. A fabulous head sculpt that looks like it was drawn by John Romita — and the color palette works as well here as it does on the page. Unfortunately, the paint on the nose rubs off relatively easily but the design itself is nearly flawless. 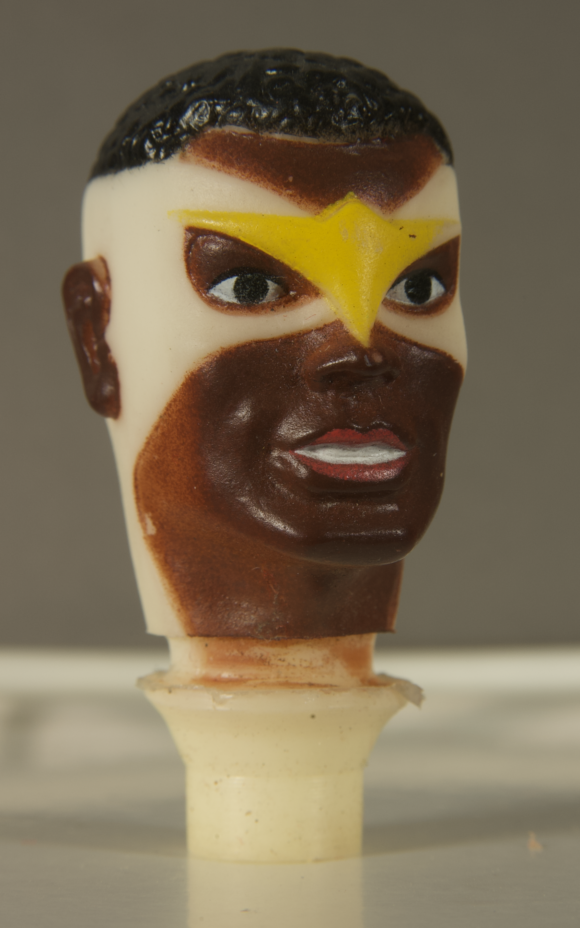 8. The Hulk. This is the shaggy-haired ’70s Hulk, all right. Herb Trimpe or Sal Buscema would have been pleased, I imagine. 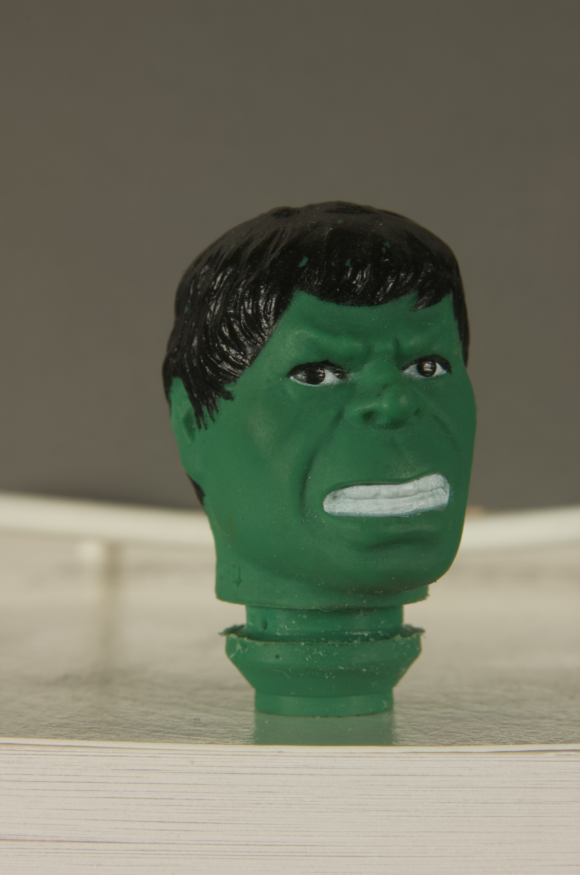 7. The Lizard. Oh, how I wanted the Lizard when I was a kid. Even more than the Green Goblin, maybe. He has off-model teeth — a big so-what, if you ask me — but this scaly monstrosity gleefully channels Curt Conners’ alter ego. It’s different from the other Mego heads in that it’s not at all human, so it gets extra points for bold creativity. 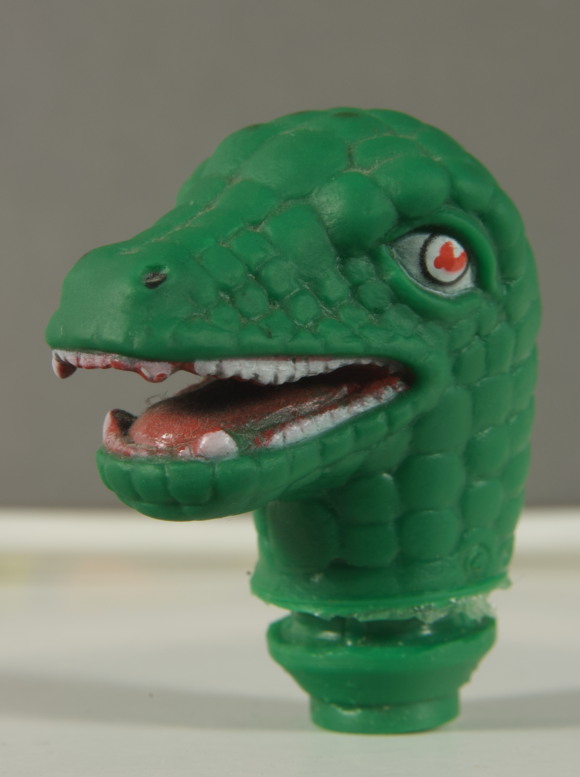 6. Batman (Removable cowl). This is actually a tough one. The molded mask version of Batman is my personal favorite from a sentimental standpoint, though looking at it dispassionately it comes up a little short. On the other hand, the removable cowl version is a standout. Even though it’s not technically part of the head sculpt, the cowl works magic and those that are in good shape still fit properly over the Bruce Wayne head. 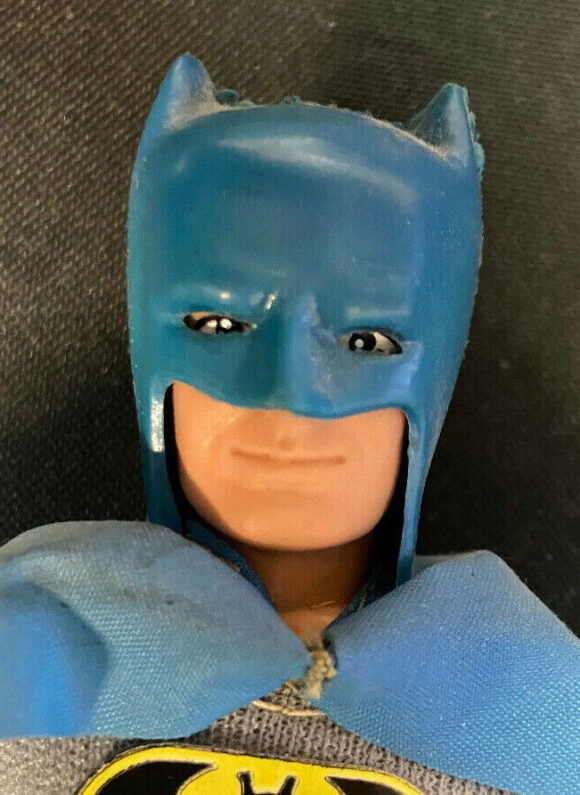 Yes, the RC Batman head is a little bulbous but it doesn’t matter because it’s a great package. And the Bruce Wayne sculpt itself just screams Man About Town. Love it. 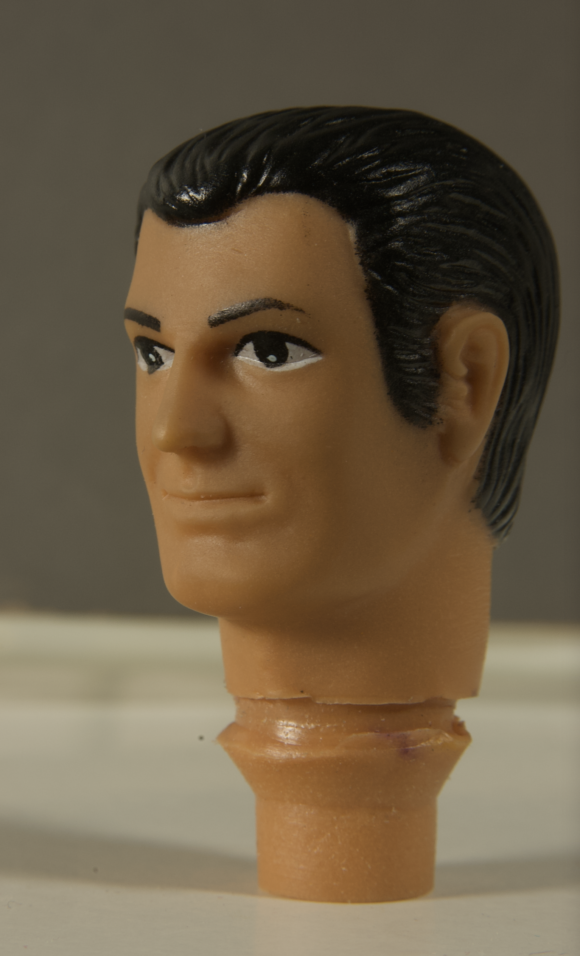 5. Spider-Man. In a way, this is the greatest head sculpt of them all. Mego nailed the Romita eyes in a way few other action figures ever have, so I look at it as the ultimate example of Bronze Age Spidey merch. So, why not higher on the list? Because even though I really like the way the head looks with the carved webs, it isn’t really accurate, so points off. Still looks magnificent, though. 4. Green Goblin. One of the most creative head sculpts in any Mego line, it captures the Goblin’s madness with another face ripped straight from the comics pages. It would be higher on the list if it weren’t somewhat derivative of another top sculpt of a laughing lunatic. (See below.) 3. The Thing. They captured him yelling “It’s Clobberin’ time!” At least that’s how it looks — which is exactly the point. And he’s got ever-lovin’ blue eyes. An outstanding sculpt that stands the test of time against more modern, higher-tech versions. 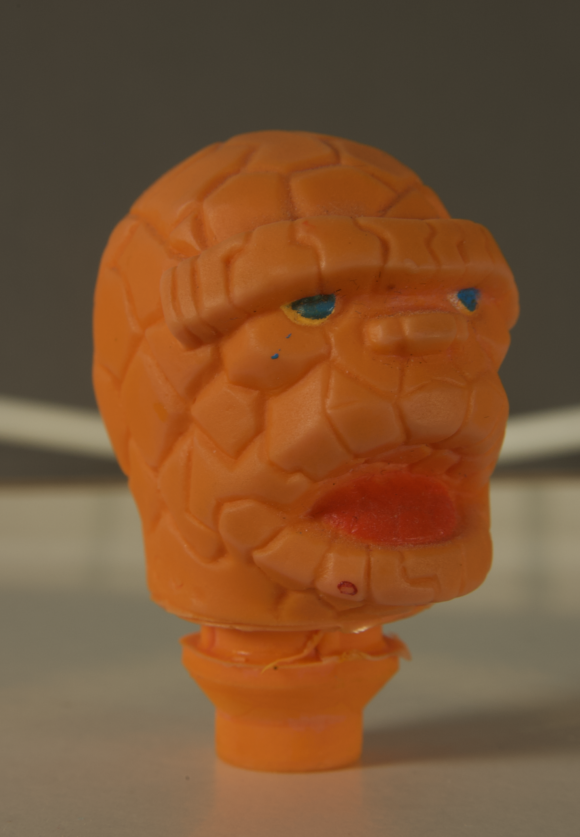 2. The Joker. Every time I look at a Mego or Mego-like figure with a new Joker head sculpt, I mutter to myself, “Pointless. It was perfect as it was.” The bright green hair, the sharp ruby lips, the chalk white pallor are all Joker staples and Mego tied it together with the Ace of Knaves’ signature cackle. Best thing is that this visage works as a stand-in for both the lighter Silver Age Clown Prince of Crime and the darker Bronze Age Harlequin of Hate. 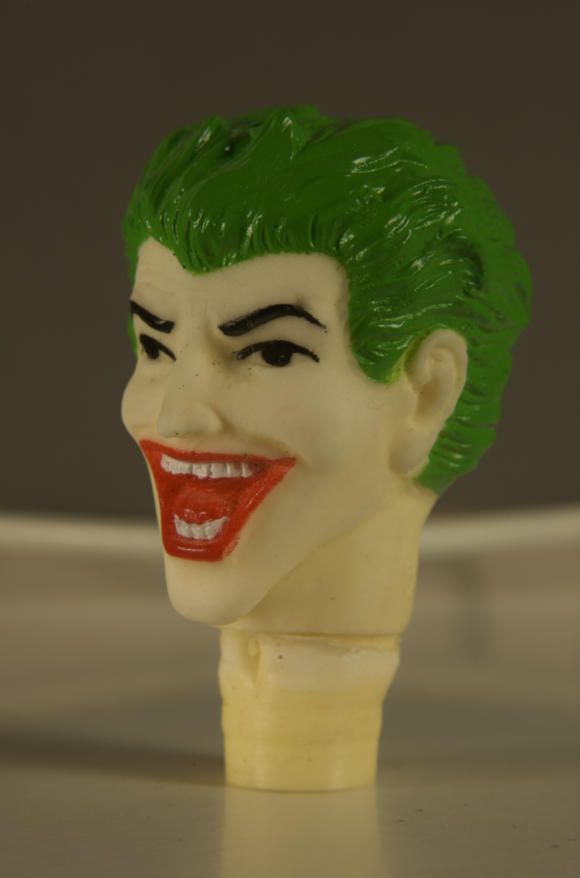 1. Green Arrow. Imaginary conversation at Mego in the ’70s: “Who should we do next: The Flash? Green Lantern? Those are the big names left.” “No, check out Neal Adams’ Green Arrow — what a great design. Let’s do that. It would be fantastic if we could pull off the goatee, the pointed mask and make it so a hat will fit on his head. He may not be the biggest superhero out there but he looks damn cool.” And the rest is Mego history. 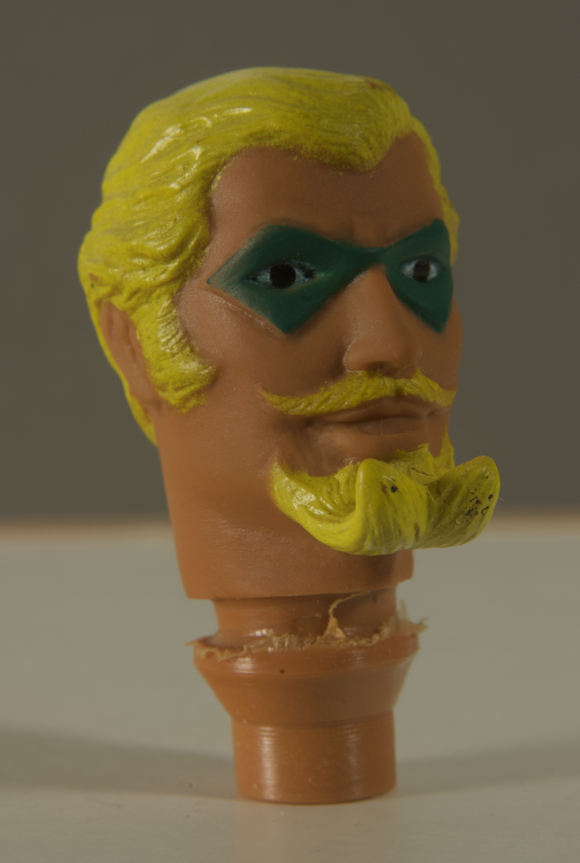