How ADAM WEST, NEAL ADAMS and MEGO Made Me a Lifelong BATMAN Fan

Home » BATMAN'S HOT-LINE » How ADAM WEST, NEAL ADAMS and MEGO Made Me a Lifelong BATMAN Fan

Scenes From a Bat-Life — on the Caped Crusader’s anniversary…

UPDATED 4/29/22: Neal Adams, comics’ greatest artist, has died at the age of 80. Here, we re-present this piece from 2017. For a series of interviews and tributes to the groundbreaking creator, click here. — Dan

Over the years, I’ve written about Adam West, Neal Adams and Mego many times over in many different ways, but not quite like this.

Why now? Why not!

See, it’s all connected: Unlike a lot of the people, I don’t really have a singular “secret origin” as a fan. There was no single day where it began. I actually remember a series of vignettes that have fused in my mind, a loose series of Scenes From a Bat-Life.

But those memories are as stark and precise as if they came from yesterday.

And it all began with Adam West… 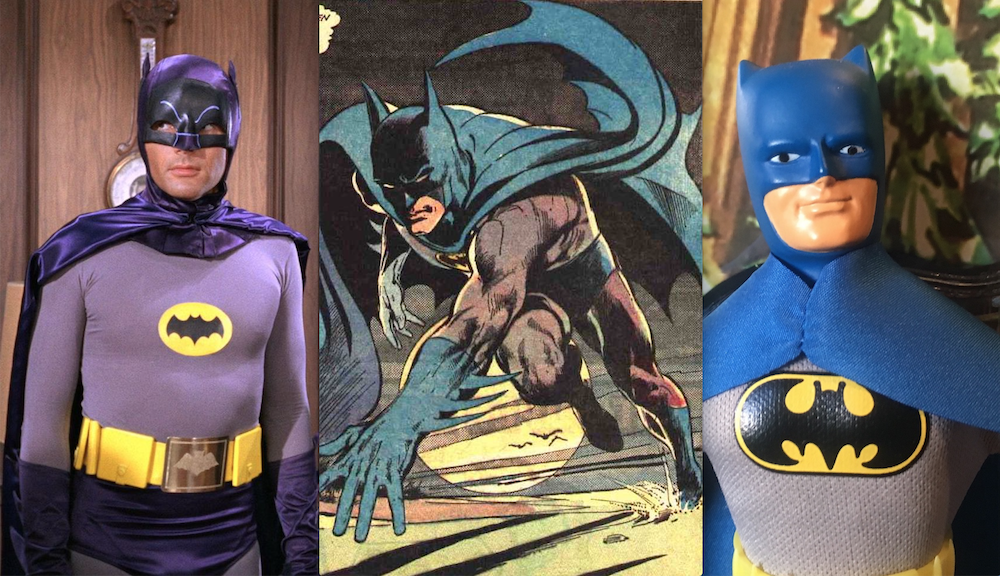 Adam West was always there.

I don’t remember the first time I saw the 1966 Batman TV show. It debuted a little more than a year before I was born and by the time I was of TV-watching age, it was in syndication on Channel 11 in New York. So I just don’t remember a time without it. 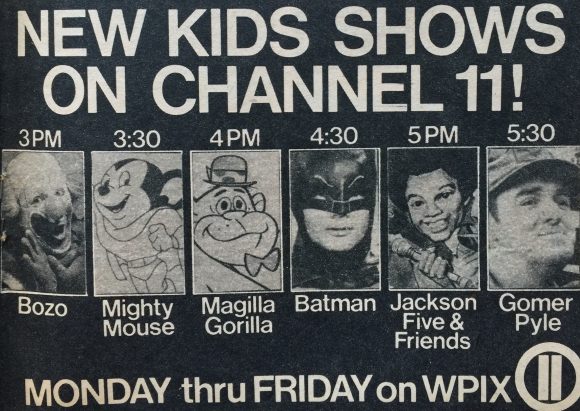 I also don’t remember a time from childhood when it wasn’t my favorite show. I was as obsessed as any 5-year-old could be, acting out scenes in my bedroom and wearing my cloth Ben Cooper costume everywhere my Mom would let me.

At the supermarket, the clerks would ask, “Hey, Batman, where’s Robin?” And I’d answer with all the authority I could muster, “He’s doing his homework.” 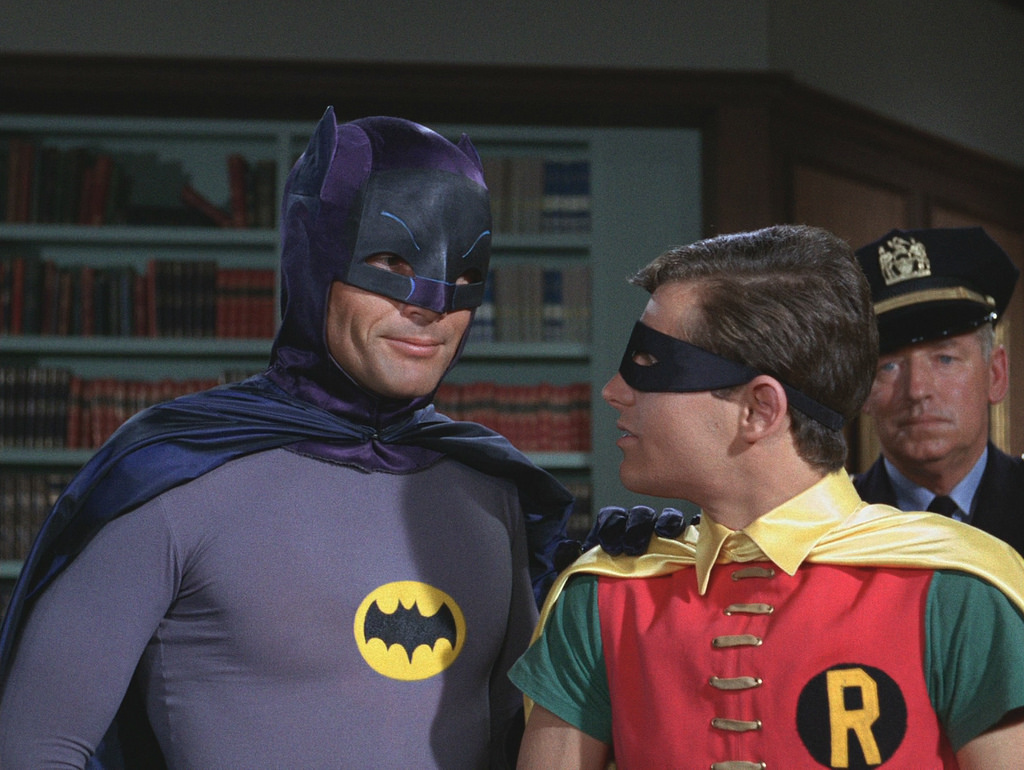 And then some guy would ask me to fly, and I’d be quick to correct them, sternly:

All through the ’70s — except for those frustrating times when the show was off the schedule — Batman on Channel 11 was appointment television. The only time I would change the channel was when The 4:30 Movie was on Channel 7 — and they’d be showing the 1966 movie. 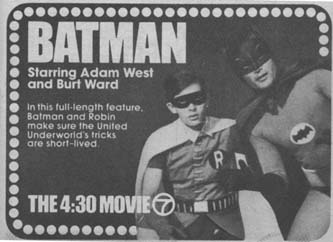 Then I’d click back and forth and try to give myself commercial-free Batman.

So Adam West opened the door.

Now, I was an A.M. kindergarten kid at Wayside School in Ocean Township, N.J. My mother worked, so I went to a babysitter’s for the afternoon. Marilyn Tagliaferri had kids of her own, older than me. But her son Phillip was pretty close in age and we used to play Batman in the fields across the street from their house.

One morning, Phillip had school but I didn’t for whatever reason and I walked into his room as he was getting ready to leave. I looked to the right and on his dresser were two figures: Batman and Robin, in all their plastic glory.

They were called Megos, I soon after learned. But in that very moment, it was as if the heavens opened and — ZAP! — I was hit by some divine light. Everything changed in that instant: These were glorious and I had to have them!

As soon as my mother picked me up I pleaded and badgered and begged her. Whether I got Batman that night or the next or the next, I’m not sure. But it was fast. Eventually, I, as they say, “collected them all.” 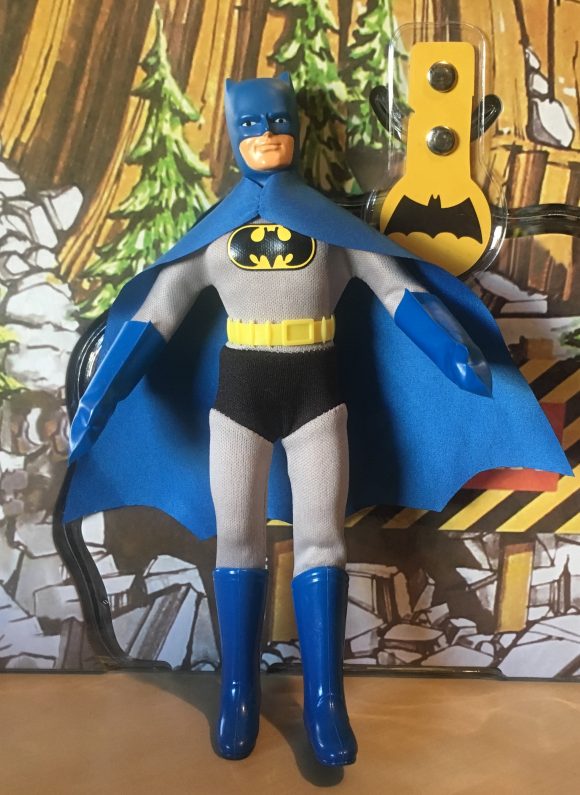 Somewhere around this time, I’d begun accumulating comic books. I can’t say collect because mostly I either ended up with them or asked for them whenever I saw them. This being the days before the proliferation of comics shops, I’d get comics at the convenience store, the drug store, a flea market called the Collingwood Auction.

One time, my parents’ friends, the Sperlings, gave me a stack of Batmans and Detectives from the ’60s. Their sons, they said, had outgrown them. (I wonder if their sons felt that way, actually.) I remember Detective Comics #360 and Batman #192, with their Carmine Infantino covers, among them. 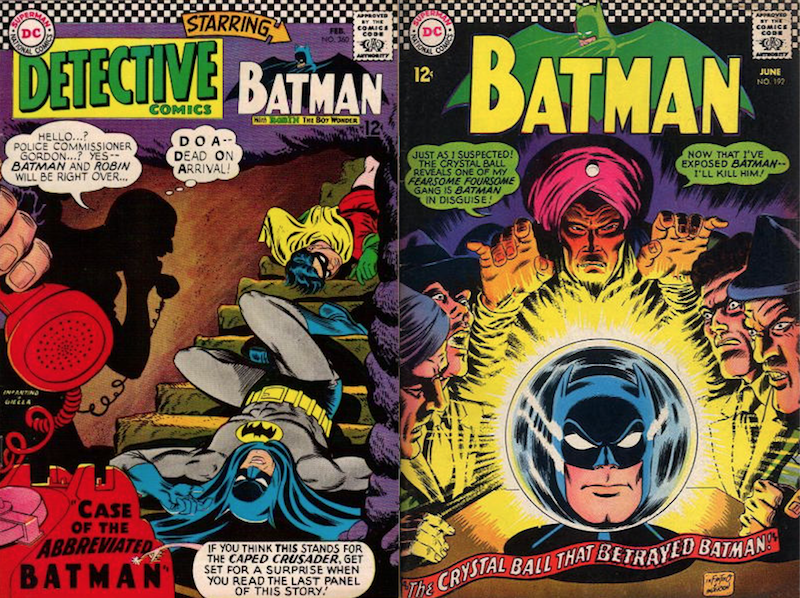 This was fantastic stuff.

But then there was the time when we were at Krauszer’s, a regional chain like 7-Eleven. Over on the spinner rack, I saw this Batman comic that was deeply unsettling.

In the center was a terrifying image of the Grim Reaper, swinging his scythe. Robin’s on the ground feebly defending himself while Batman is swooping in to help — but he might not make it. The background was bright red, like a siren warning danger. 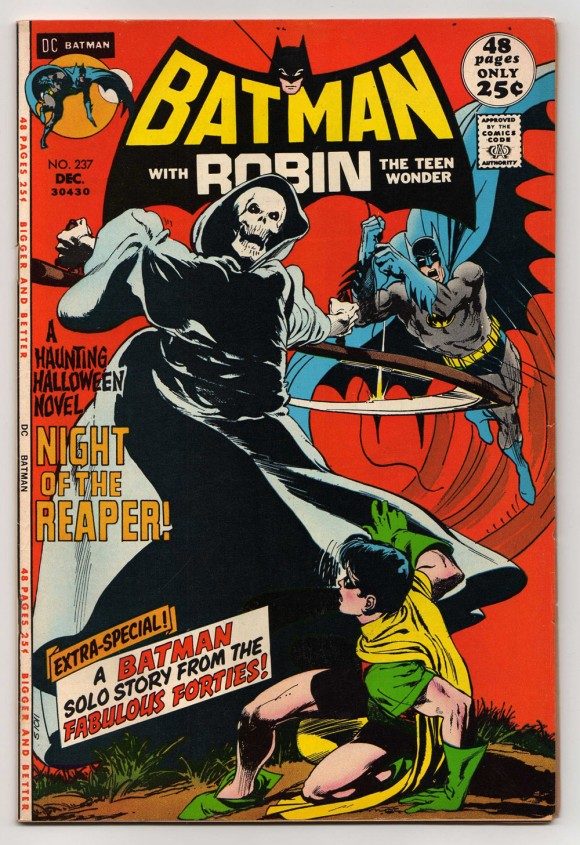 I was taken aback. Even as a young kid — and I was maybe 4 or 5 at the time — I knew that the Batman on TV was always going to get out of the jam. That was as much fun as him getting into the jam. When we played Batman as kids, that was part of the deal: The Caped Crusader always escaped certain doom.

I had to have it.

I didn’t know it immediately, but that cover — and the interior art — was the work of Neal Adams.

If Adam West made me a Batman fan, and if Megos made me a lover of swag, then Neal Adams made me a comics fan.

As I got older, collecting Adams issues was a mission within my larger mission of obtaining every Batman comic I could get my hands on. These were horcruxes, mystical pieces that made my collection something special. Getting an Adams back issue was something to celebrate, something that would make you walk a little taller. 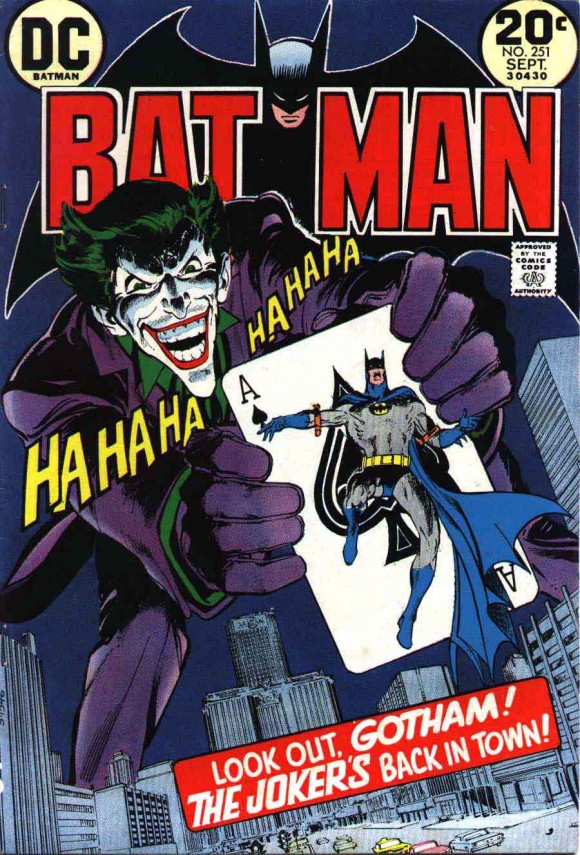 About 25 years ago or so, I quit comics. I was burned out. Eventually, I sold everything off. This was a roughly 10-year period I call the Great Hiatus. Because eventually, I came back. Obviously. Hell, now I even have my own website where I can write about this stuff to my heart’s content.

I never tried to rebuild that original collection as it was. I never wanted to.

But I couldn’t live without those parts that gave me the most joy. The parts that spoke to me on a visceral level. I reconstructed — and in many ways improved upon — that original collection. It’s a collection that revolves around Adam West, Neal Adams and Mego. 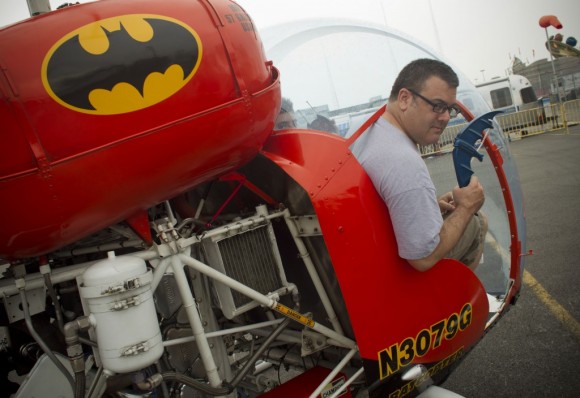 As my wife likes to say, I’m living a charmed Bat-Life: I’ve interviewed Adam West, Burt Ward, Julie Newmar and Lee Meriwether. I’ve flown in the actual 1966 Batcopter and ridden in a replica Batmobile. I can put the show on TV any time I like and I have more Batman ’66 collectibles than I ever expected. I have more Megos than I did as a kid. (Or at least dead-on remakes.)

And Neal Adams? I’ve spent hours at his studio, asking question after question about his work, his creative process, his memories. I was even able to get him to do this commission: 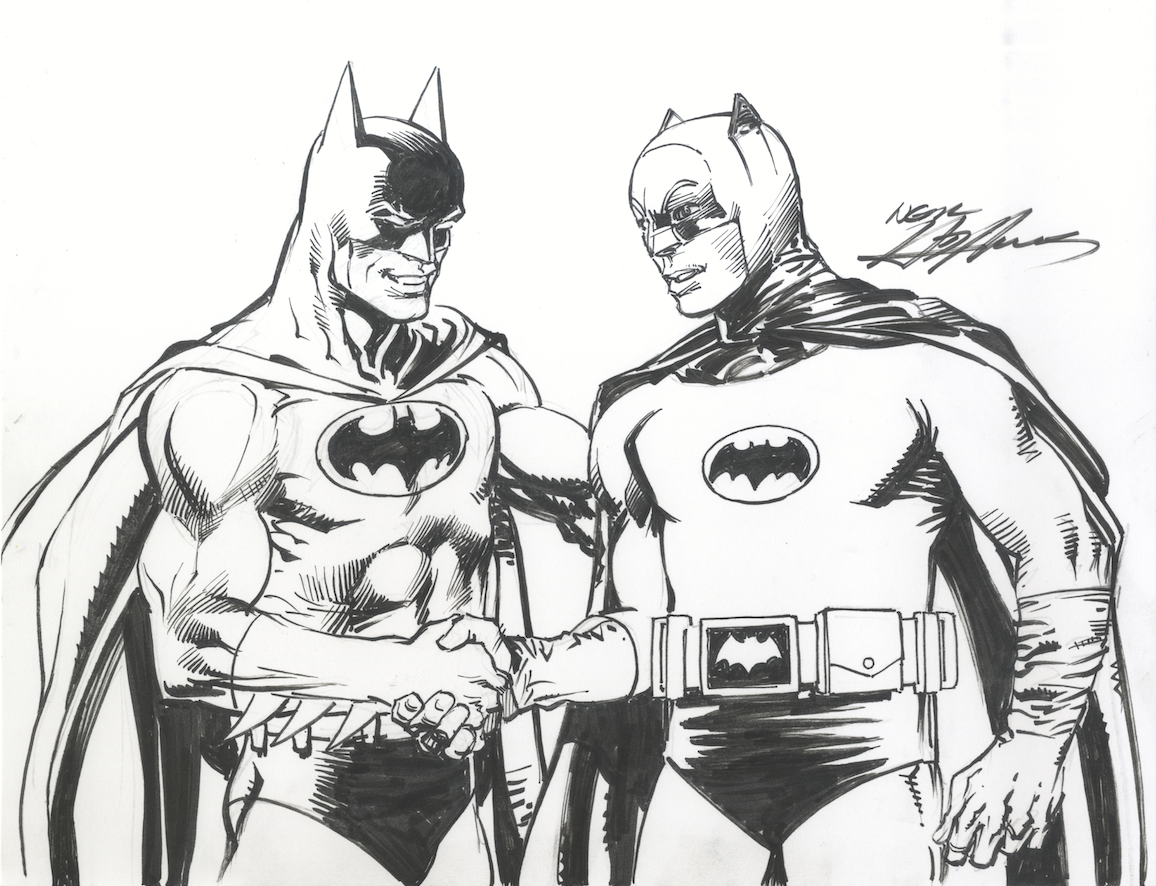 I’m 50 now. But every time I watch that show, or pick up an Adams comic, or look at my Megos, I’m a kid. A happy, contented kid.

And that’s what being a fan is all about. 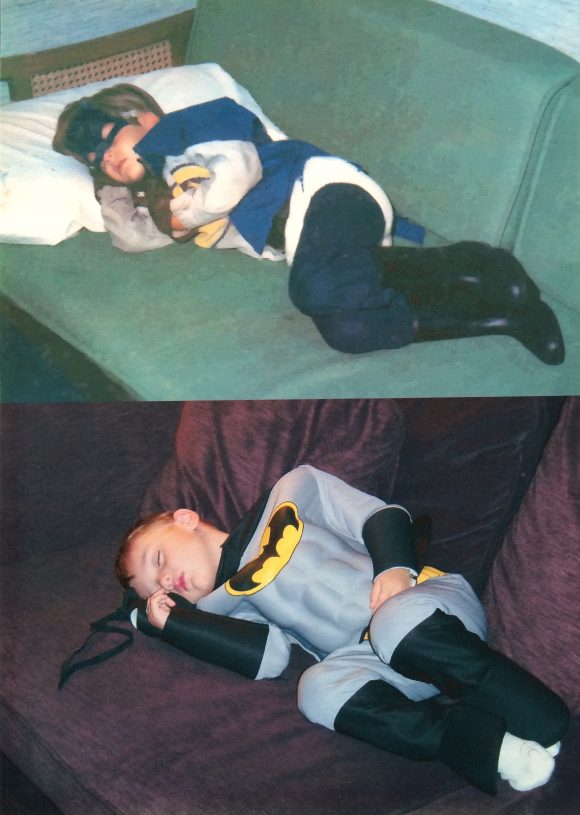 — ADAM WEST: A Celebration — A Series of Interviews and Tributes. Click here.

— The NEAL ADAMS INTERVIEWS: Discussions With the Master. Click here.