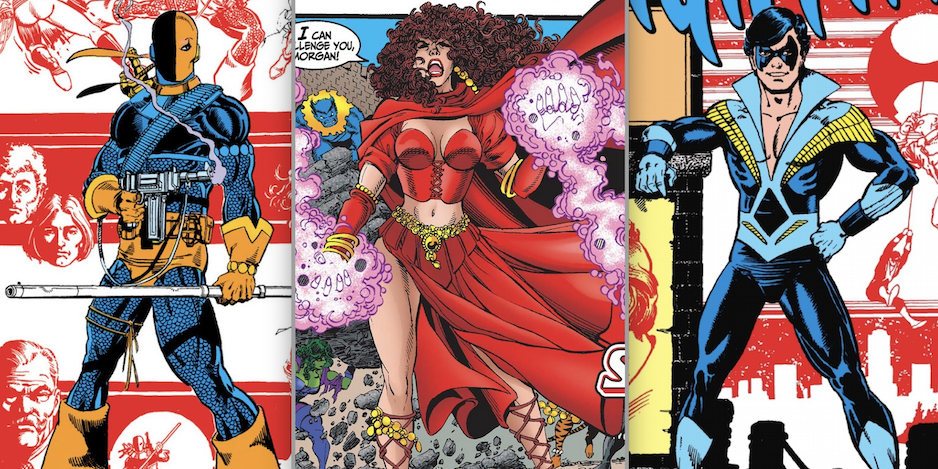 UPDATED 5/9/22: The great George Perez has died at the age of 67. This ran in April in celebration of Perez’s life. We re-present it here. Click here for our complete index of Perez features. — Dan

In some form or another, George Perez has worked on just about every DC and Marvel character there is. He’s a genius at interpreting the heroes and villains designed by others but he also has a pronounced gift for creating his own.

(And click here for the TOP 13 CHARACTERS DRAWN BY GEORGE PEREZ.)

13. The White Tiger. One of George Perez’s earliest character designs, Hector Ayala aka the White Tiger, is also one of his simplest. Clad in all white with just a glowing green necklace to set it off, it’s a very effective look. And there’s a valid reason for that: Featured in the black-and-white pages of Deadly Hands of Kung Fu, the White Tiger needed something without much detail, and Perez delivered. He was also responsible for a significant portion of Ayala’s Puerto Rican background in New York City as Marvel’s first Latinx superhero. 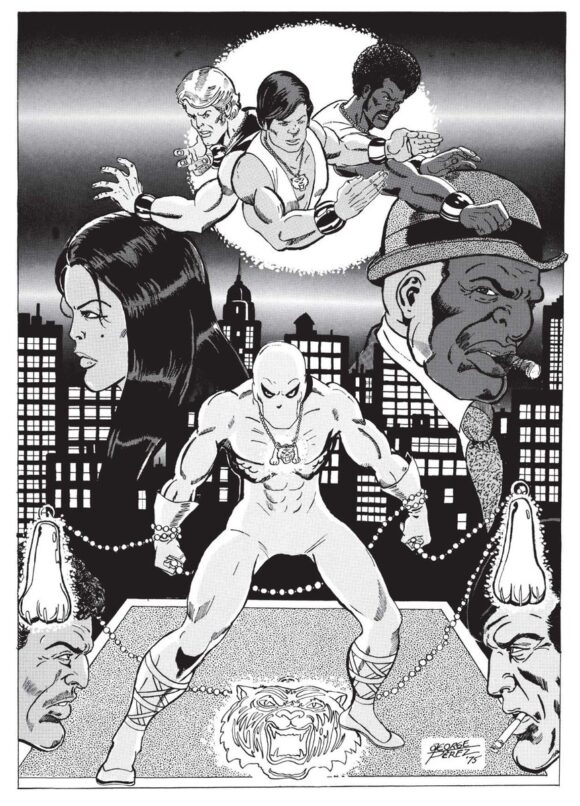 12. Brother Blood. Hands down the most funked up cult leader costume ever! Part super-villain, all creep, Brother Blood’s outfit is a red and black ensemble jazzed up as only George Perez can do. But then it’s topped off with the supposed prayer shawl of Jesus Christ (which gives BB his immortality) as part of his cape and a demonic creature’s skull resting atop the bad Brother’s own dome! Insane! Eventually Brother Blood is knocked off by his own son (the caveat of his immortality clause). But alas the successive and rebooted Brother Bloods don’t even come close to the original design by Perez. A true fashion icon for the Church of Blood. 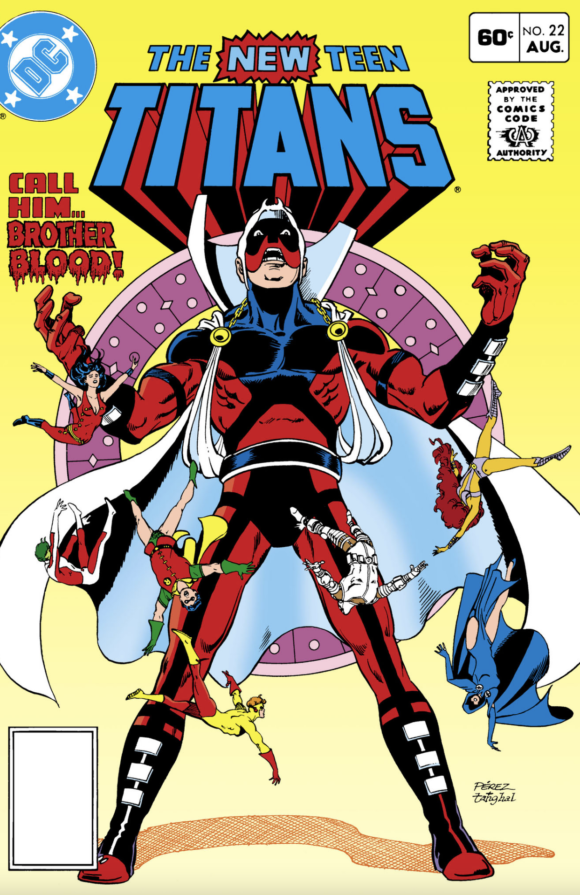 11. Cheshire. First appearing in New Teen Titans Annual #2, Cheshire was one of six assassins hired by the Monitor. While the others seemed like ripoffs from the pages of G.I. Joe, A Real American Hero, Cheshire (being the only female of the group, the only one with a hint of a back story, as well as the only survivor) was the standout. And a knockout! Clad all in green, Jade Nguyen is a master martial artist, weapons expert and toxicologist that has vexed the Teen Titans and the greater superhero community on many occasions. “The Most Dangerous Woman Alive” has proven to be quite the adversary in the streets or in the sheets (as Roy Harper found out). 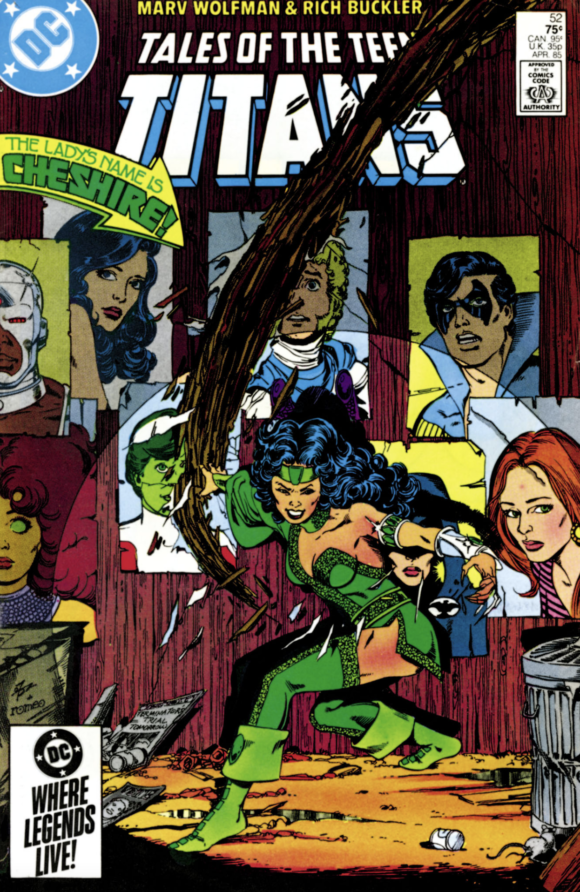 10. Lady Quark. The sole survivor of Earth-6, Lady Quark is the best of the new character designs that George Perez contributed to Crisis on Infinite Earths. While the designs for the other newbies (the Monitors, both original recipe and Anti, Harbinger, Pariah and Alex Luthor) are all serviceable within the story, Lady Quark is the only one who can be extracted from that environment to fit other scenarios. Rocking an angry Annie Lennox vibe, Lady Quark’s body is exploding with Kirby Dots™ and she channels it into bursts of Kirby Krackle™! It’s one of Perez’s simpler designs but it’s very effective.

9. Raven. The mysterious daughter of a human mother (Arella) and the demon Trigon, Raven was introduced as the New Teen Titans’ resident mystic character. Whereas her teammate Starfire was extroverted and was designed to emphasize that trait, Raven was the exact opposite. Clad from head to toe in a dark blue dress adorned with a hooded cape that made her resemble the bird that was her namesake, Raven was an empath who tried to keep her own emotions in check. Eventually that proved more and more difficult as Trigon’s evil influence over Raven grew. Or at least that was the in-story reason for the gradual change in Raven’s facial appearance. In reality, George Perez’s evolving art style was the true reason, as he began to give the Titans more unique individual facial features. Raven’s face became more gaunt in appearance and when this was pointed out to Perez and co-plotter Marv Wolfman, they decided to use this as an actual plot point to turn Raven evil. Necessity is the mother of invention! 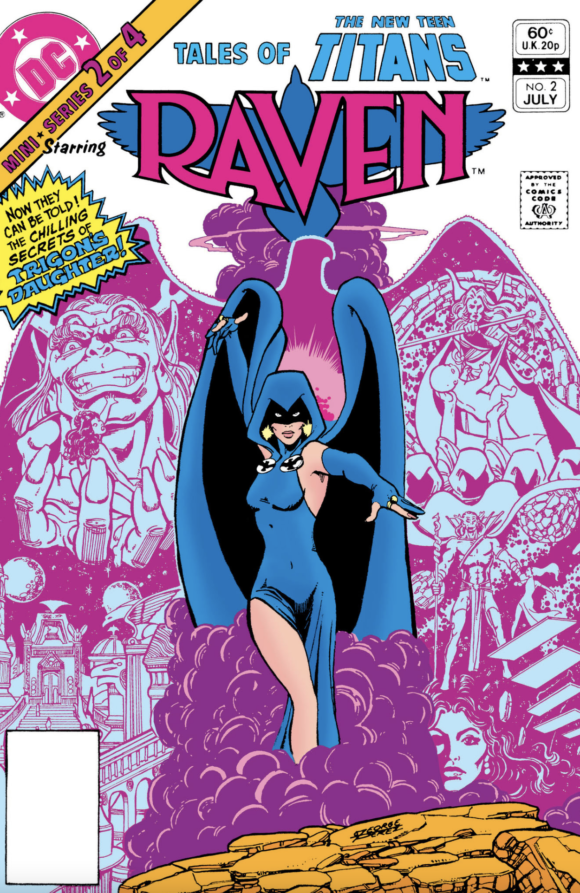 8. Wonder Man. This short-lived Wonder Man costume was created by Perez in Avengers #161 (although in story it’s created by the Beast). It didn’t last long and it was eventually replaced by the safari jacket outfit. But it’s a nice upgrade from his original red and green costume, with the added yellow forming a WM on the chest. An early example of Perez thinking outside the box and jazzing it up. 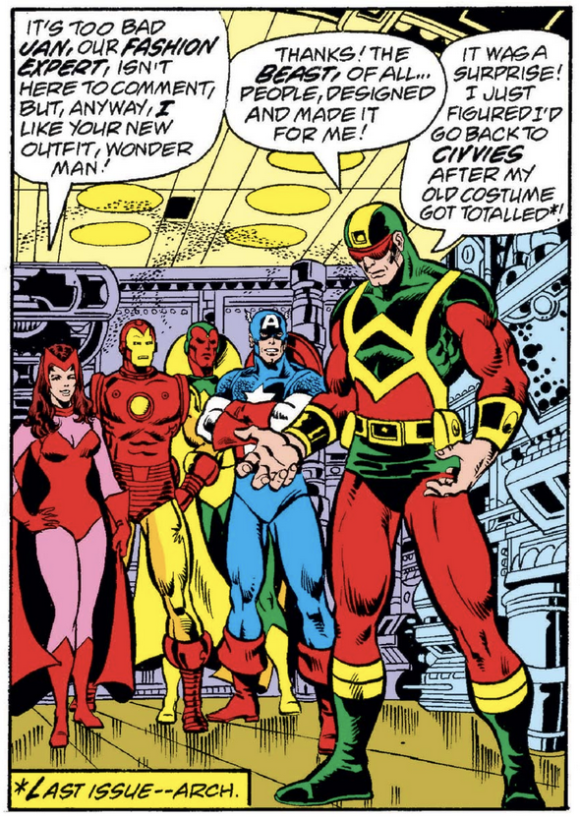 7. Flamebird. The original Bat-Girl (Betty Kane) was reimagined and redesigned as Bette Kane by George Perez in Secret Origins Annual #3. This version of Bette outgrew her costume and identity as Bat-Girl and revamped herself into Flamebird to pair up with Dick Grayson’s new identity of Nightwing (in a nod to the pre-Crisis Kandorian heroes Nightwing and Flamebird). Flamebird still retains the color scheme of her original BG suit but has amped up everything else, as only Perez would be crazy enough to do. I would have loved to have seen stories teaming up the new Nightwing and Flamebird and it’s a shame that it never happened.

6. Zatanna. Perez worked his magic on Zatanna in Justice League of America #187 when he redesigned her costume so that she wasn’t a carbon copy of her father Zatara (her first costume of top hat and fishnets) or her mother Sindella (her second costume of vampire collar and ponytail). If Zee isn’t going to wear her iconic traditional magician’s outfit, then this is the costume I want to see. It’s more mystical (bonus points for the cape) but also still kinda super-heroish. The billowing sleeves are great for waving arms around during incantations and it’s all topped off with some weird demonic hair clip and big dangling earrings. 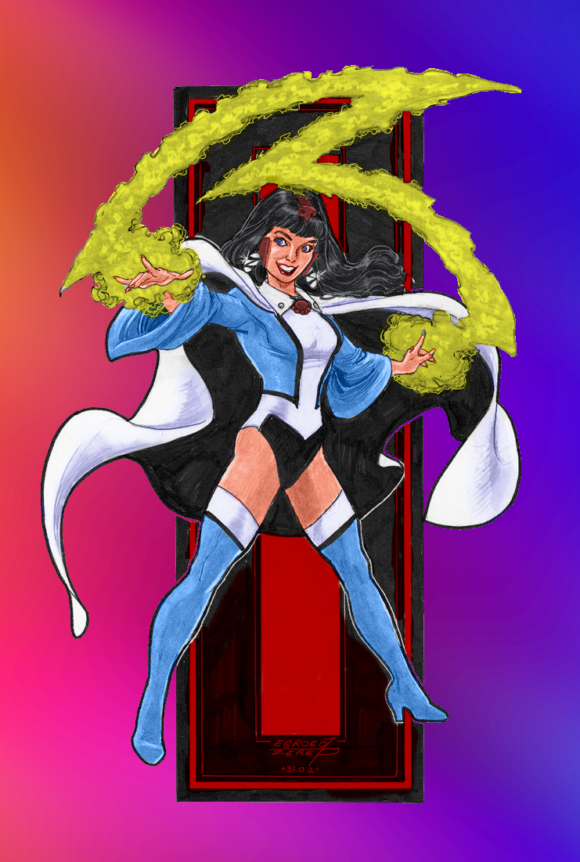 5. Starfire. Red Sonja in outer space. That’s how George Perez described his design for Princess Koriand’r of Tamaran, one of the New Teen Titans. Perez said in Eric Nolen-Weathington’s Modern Masters Vol. 2: George Perez: “I figured based on the description, [she] was Red Sonja in outer space, so she ended up having a visual cue from that. When Joe Orlando passed by and saw the character sketches he suggested that maybe her hair should be longer. That I took to the ninth degree and gave her the Mighty Mouse contrail.” And it works. Starfire’s escape from Citadel captivity and her arrival on Earth served as the catalyst for the formation of the New Teen Titans. She’s instantly a fish out of water and her costume (or lack thereof) pushes that even further than it would have if she arrived in a spacesuit. Since 2003, when the character became part of the Teen Titans cartoon, there have been redesigns of Starfire’s costume so that it’s less revealing and not as exploitative. But it’s the original that still stands out as one of Perez’s classic designs.

4. Scarlet Witch. When George Perez returned to the Avengers (with Vol. 3 #1), it wasn’t long before he had to redesign the ENTIRE team! Writer Kurt Busiek thrust ALL 39 Avengers into the past, to the times of Morgan le Fey, and Perez had to create medieval versions of all their costumes. The one costume that stuck upon their return to the present was for the Scarlet Witch. The one-piece swimsuit style was discarded and in it’s place was a costume more in tune with Wanda Maximofff’s Romani roots. I recall reading that when Perez had briefly worked on a T.H.U.N.D.E.R. Agents revival in the ’80s, he based the belly-dancing assassin Phoenicia on his wife Carol, who was also a belly-dancer. So I like to think that there’s similar inspiration with this Scarlet Witch design. 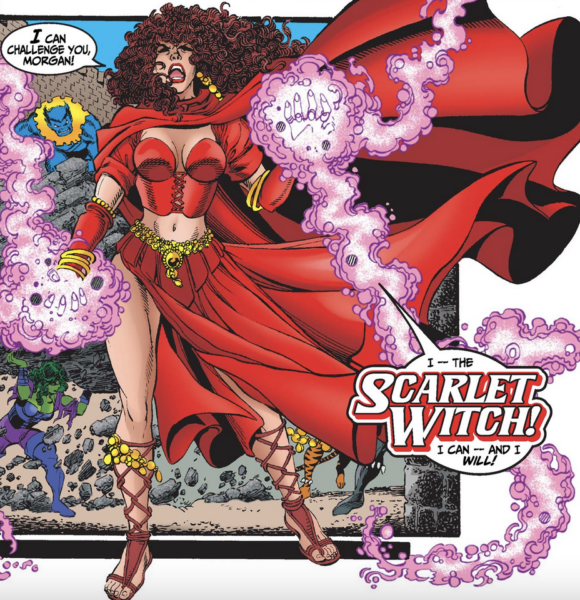 3. Lex Luthor. When Lex Luthor needed to be revamped for the 45th anniversary of Superman in 1983, George Perez got the gig. His new approach to Luthor kept the green and purple color scheme of Lex’s old iconic Challenge of the Super Friends-era battle suit. What emerged was an armored war suit, with substantially increased fire power to put him on a more level playing field with the Man of Steel. And it became just as iconic as its predecessor had. The suit was so popular it was used for the Luthor figure in Kenner’s Super Powers line. By doing so, it secured Perez some royalty money. Which is never a bad thing. 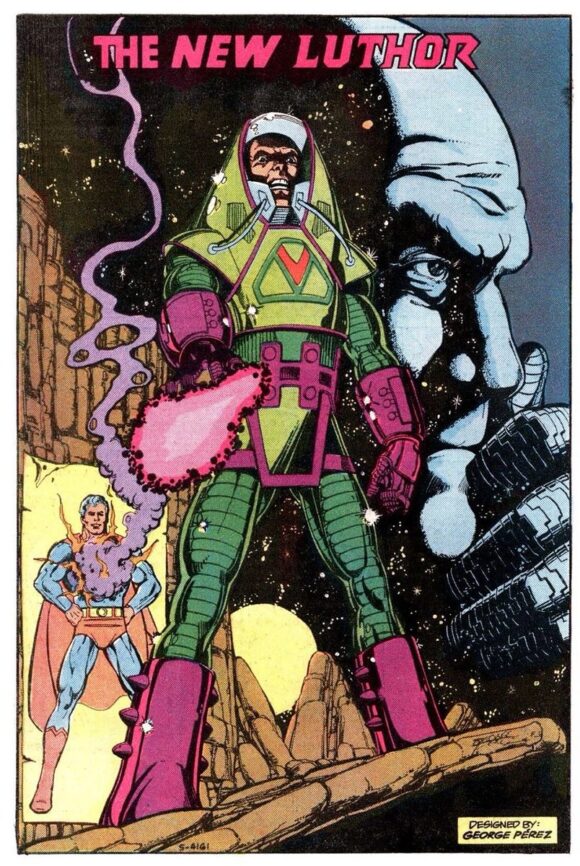 2. Nightwing. The Disco Suit. At least that’s what it’s been unofficially called. Not sure why, because disco had already been dead several years by the time Dick Grayson switched his identity and costume from Robin to Nightwing in the pages of 1984’s Tales of the Teen Titans #44. It’s my favorite of the Nightwing costumes. It has enough of a darker, more mature look to it that emphasizes that the former Boy and Teen Wonder has grown up, but it also is still playful, acrobatic and circus inspired, showing that he’s sticking to his roots. 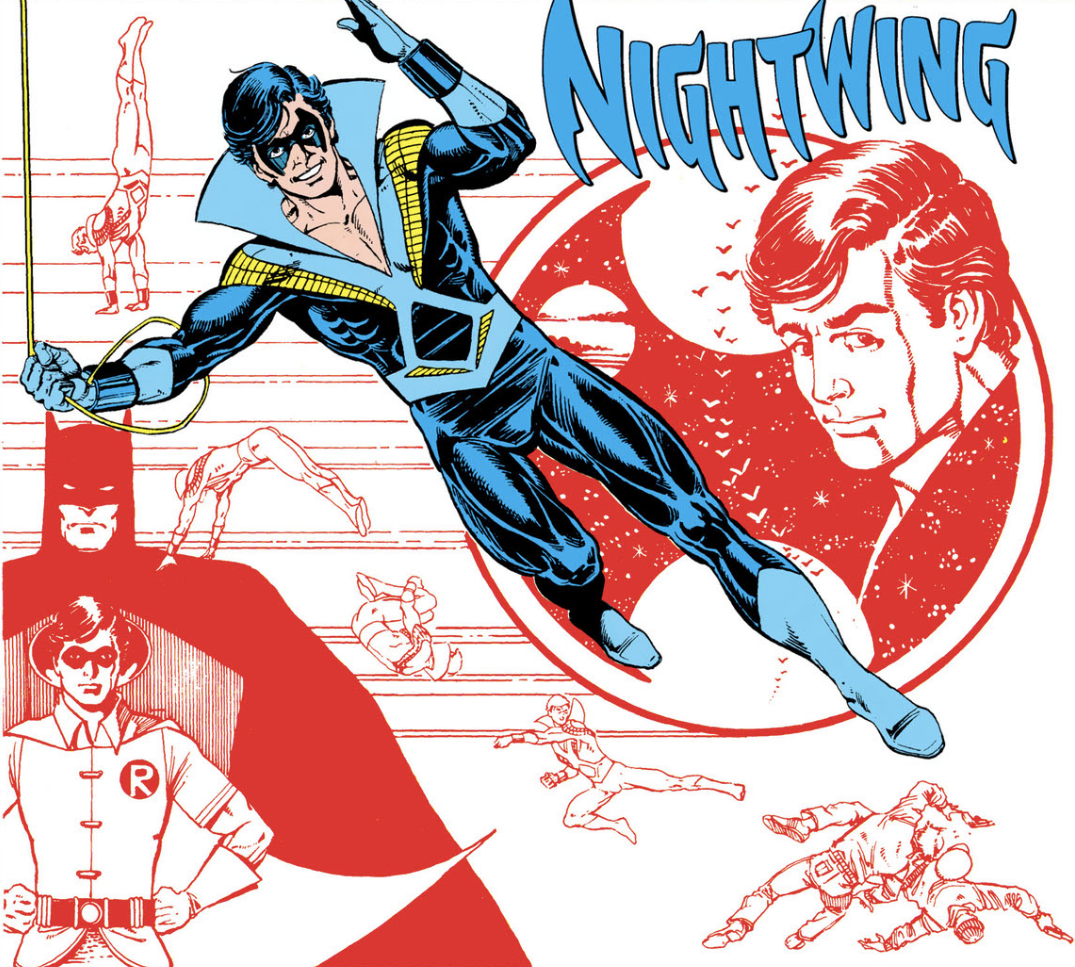 1. The Taskmaster and the Terminator. Before he left Marvel for DC in 1980, George Perez created the design for the Taskmaster in Avengers #196. It was instantly iconic. Sporting an orange, white and blue color scheme, the Taskmaster’s costume has all the bells and whistles: skull mask, hooded cape, buccaneer boots, chain mail, and a lot of weapons (sword, bow & quiver, shield). So it was a little bit of deja vu when seven months later the Terminator showed up at DC in the pages of The New Teen Titans #2 looking very similar. Orange and blue? Check. Buccaneer boots and chain mail? Check. Lots of weapons? Check. Skull mask? Um, no. But Deathstroke’s (he dropped the Terminator as his main name very quickly) mask was just as iconic. Split down the middle, the black side covered his blind eye while the orange showcased his good eye. Now while it seems as though this is a case of an artist swiping himself, it actually wasn’t supposed to be that way. Apparently Deathstroke was colored incorrectly by the colorist and it was just coincidence that the color scheme replicated that of Taskmaster. But no matter how it turned out, these two Perez-costumed mercenaries are intertwined in their swashbuckling designs. 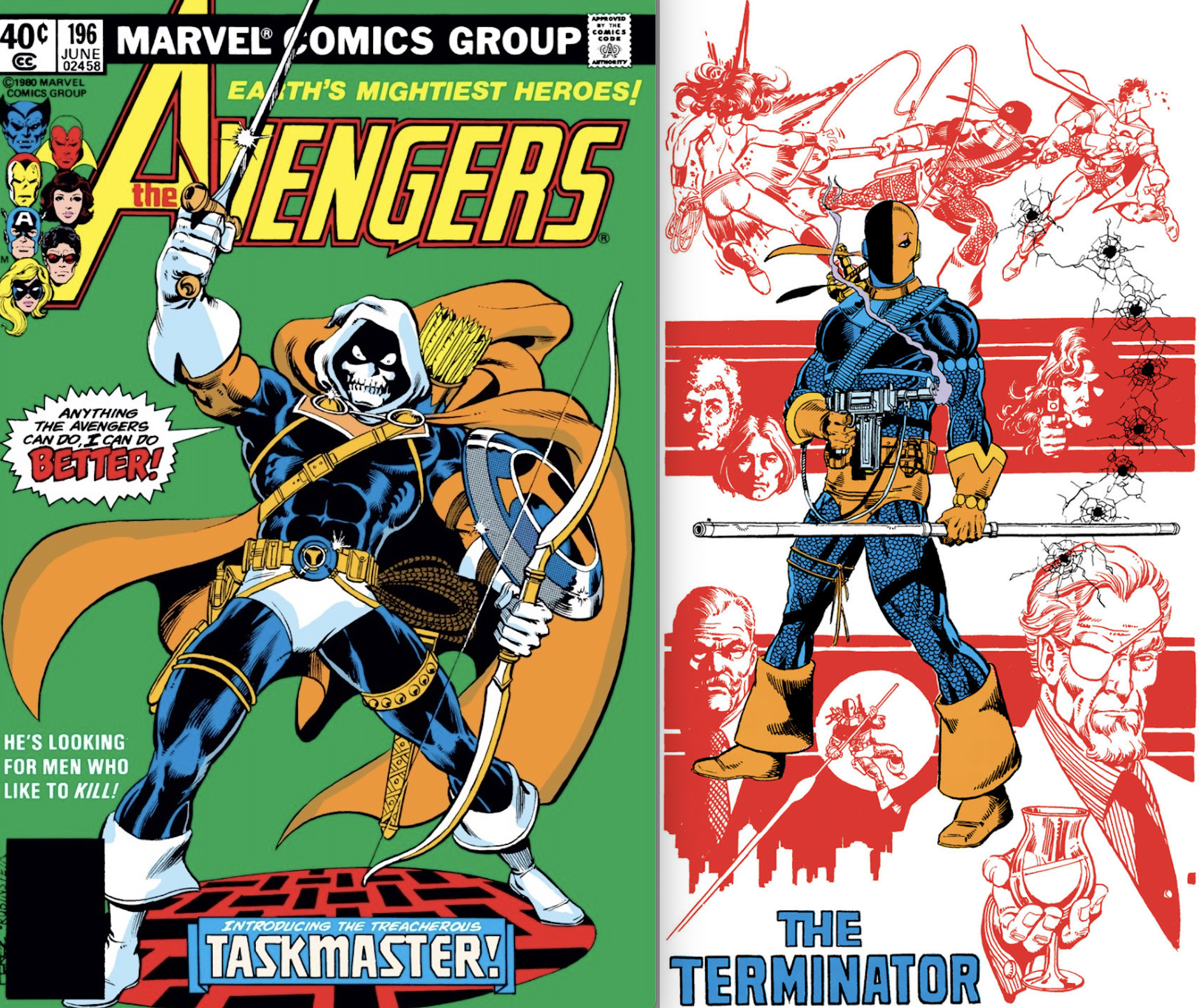 Anthony Durso, a regular 13th Dimension contributor, is the owner of Retropolis Tees and The Toyroom toy package customizing company. When George Perez announced in 2019 that he was retiring from comics, Anthony wrote a 13-part series ranking the artist’s greatest projects. That series, which was highly popular in its own right, provided the framework for the subsequent THE GEORGE PEREZ INTERVIEWS, in which the illustrator discussed each and every one of those very projects. We’re pleased to bring Anthony back for this special retrospective.