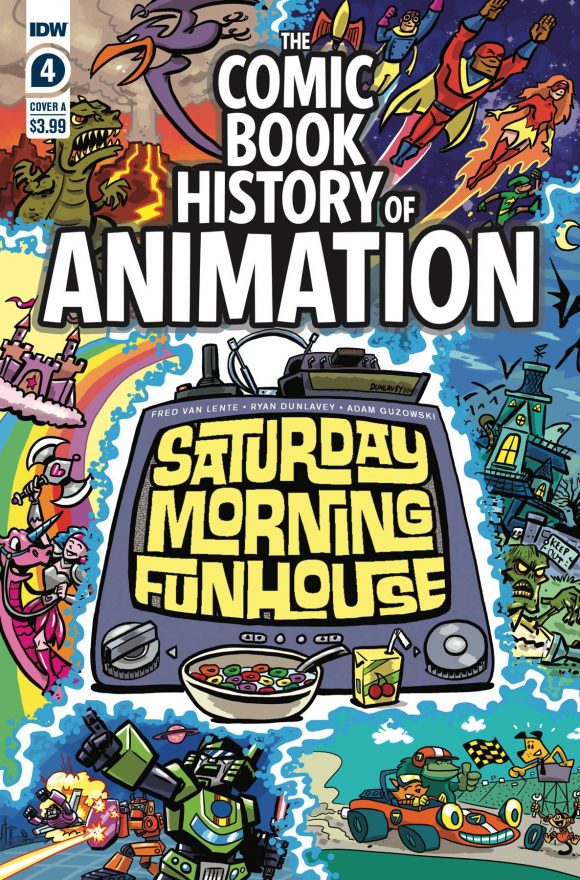 Our buddy, pal and columnist Fred Van Lente and groovy illustrator Ryan Dunlavey have a new issue of The Comic Book History of Animation out March 24 from IDW — and one look at the cover above will tell you what it’s about: SATURDAY MORNING CARTOONS! Yes!

With that in mind, Fred has put together THE TOP 13 SPACE GHOST VILLAINS — RANKED. 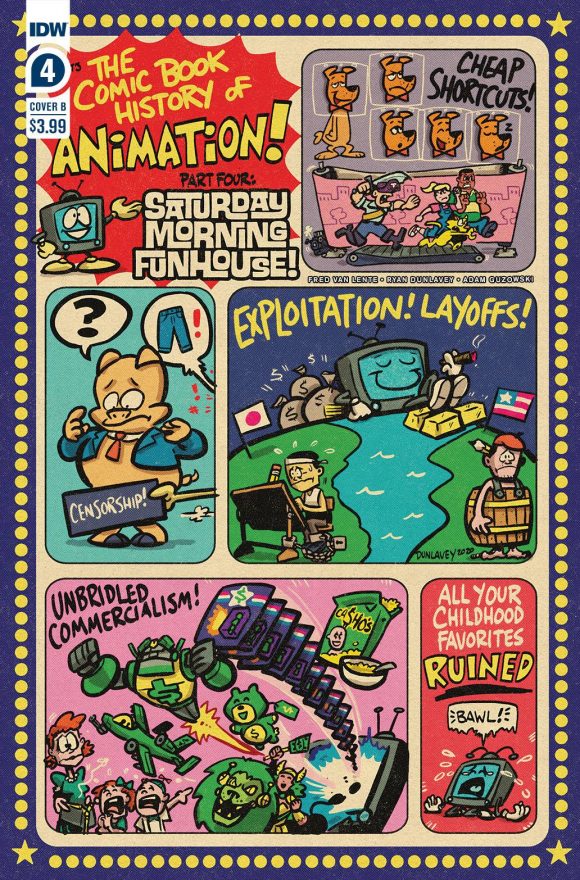 One of the great joys of doing The Comic Book History of Animation with my frequent partner-in-crime, Ryan Dunlavey, has been going back and revisiting old toon favorites of the past, including one I was absolutely obsessed with as a kid — Hanna-Barbera’s Space Ghost, which premiered in the fall of 1966, the year when Adam West’s Batman became a ratings juggernaut for ABC in prime time.

Fred Silverman, head of daytime programming at CBS, wanted as many cape shows on his revamped Saturday morning block as possible. In his autobiography My Life in Toons, Joe Barbera explained that he didn’t trust his own funny-animal artists to create a heroic human, so: 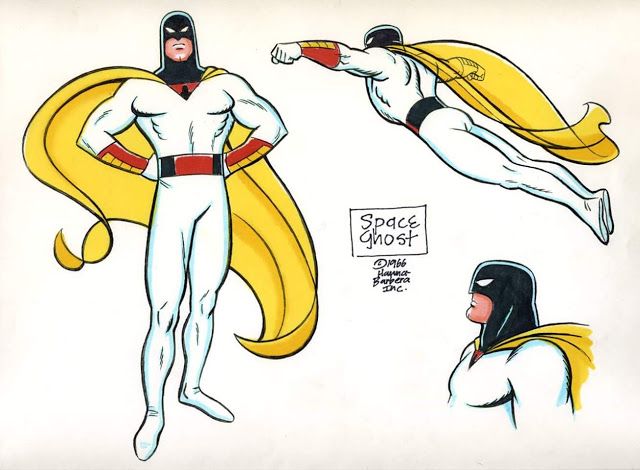 “I hired Alex Toth, a great comic book artist, to produce some designs for an as-yet nameless superhero. He produced about forty variations on a character, and, when Fred was in L.A., he came to the studio to look at them. I spread the drawings—all painted in vivid colors on cels—across the floor. With a cigarette between his lips and a Tanqueray martini in hand, Fred tiptoed among them, agonizing over just the right combination of costume and color.

“With Fred on the verge of buying the show—whatever it would be—we had yet to come up with a name. He had chosen a central superhero clad in white, with black hooded mask, and a flowing yellow cape. Talking to Fred on the phone, the name hit me: Space Ghost.”

Joe Ruby and Ken Spears, who’d go on to be the showrunners for Scooby Doo, Where Are You?, as well as create a legendary animation studio in their own right, were brought in to flesh out the series. Which they did… as little as possible. Space Ghost has the 1960s TV superhero essentials of sidekick(s), lair, themed vehicle, a rogue’s gallery of old enemies who hate him, and the airless void of space where anything else would be.

What does Space Ghost look like under his cowl? Where did he get his power bands and inviso-belt? Is his Space-Ghosting fully licensed and bonded by the state? Who are Jan and Jace, his interns-slash-sidekicks? Were they left on the Ghost Planet as infants? Did Space Ghost find them on LinkedIn? Why do Jan and Jace wear masks when they go by their real names? My wife was convinced they were boning, but the Space Ghost wiki says they are twins. That’s what I thought too, but I don’t know why since this fact is never referenced in the original show.

When I told my wife they were twins, she said she thought they were boning anyway.

Also, in the far future, would it be legal to put a Lone Ranger mask on a rhesus monkey?

The show has zero interest in exploring any of this. I have to admit this utter lack of back story was probably what drew me to it in the first place: I was free to project my own fan theories onto it, and imagine SG was part of some Green Lantern-esque corps of seance-summoned galactic cops. 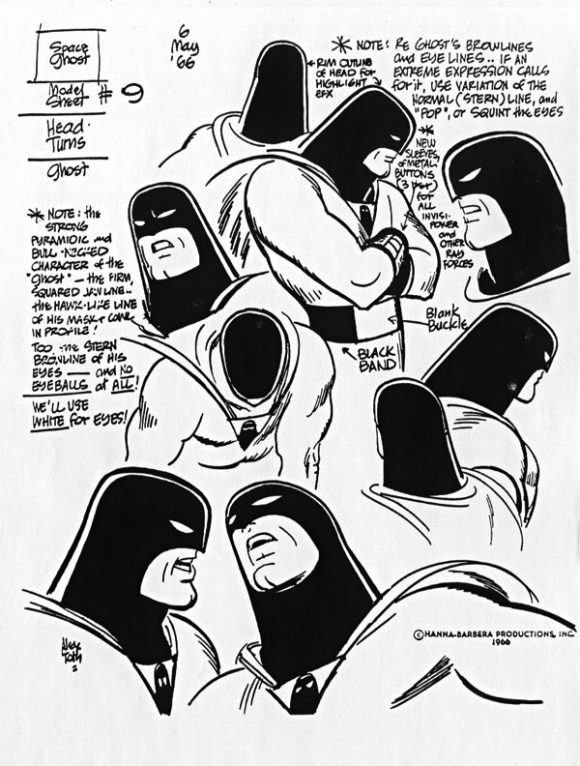 I discovered Space Ghost as part of the 1981 Space Stars revival, but in its original 1960s run, he shared his half-hour with the uniformly terrible Dino Boy in the Lost Valley. Dino Boy is a plane-wrecked urchin who has to be constantly rescued from prehistoric monsters and unnecessarily racist tribespeople by Ugh, a caveman named after my reaction to every one of his adventures. The only thing that made Dino Boy bearable was my fantasy that the only reason Ugh always saved this kid’s dumb ass all the time was that he was planning on eventually eating him.

Also, if you can see images like this without your inner 13-year-old erupting in peals of laughter, you are made of stronger stuff than me (it’s even more explicit animated): 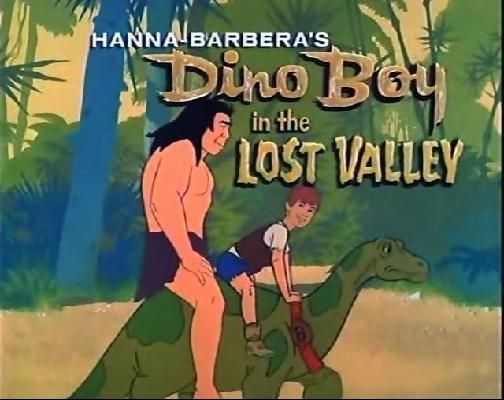 For the final two episodes, Hanna-Barbera wisely dumped Dino Boy for an epic battle pitting Space Ghost against his own Sinister Six, the Council of Doom. This saga also served as a back-door pilot for a bunch of other Toth-designed adventure shows that are very much what a clueless Hollywood executive would think kids would like: Moby Dick the Super-Whale, The Mighty Mightor, which answers the burning question “What if Thor was a caveman?”, and Shazzan, a super-genie living in a pseudo-Arabian Nights world that Twitter would have drummed off the air in five seconds, had Twitter been around then.

The standout of this bunch was The Herculoids, about a space Tarzan, his family and their monster-pet sidekicks, which, ironically, actually beat Space Ghost in the ratings, to the order of an astounding 60 Nielsen share. (To show you how much the television landscape has changed, Sunday Night Football is today’s highest rated show, with a 20.1 share.) So Fred Silverman decided to not order any new Space Ghosts and transferred its budget to more Herculoids instead.

Isn’t that always the way? The veteran trains his successor, then gets fired as his reward. 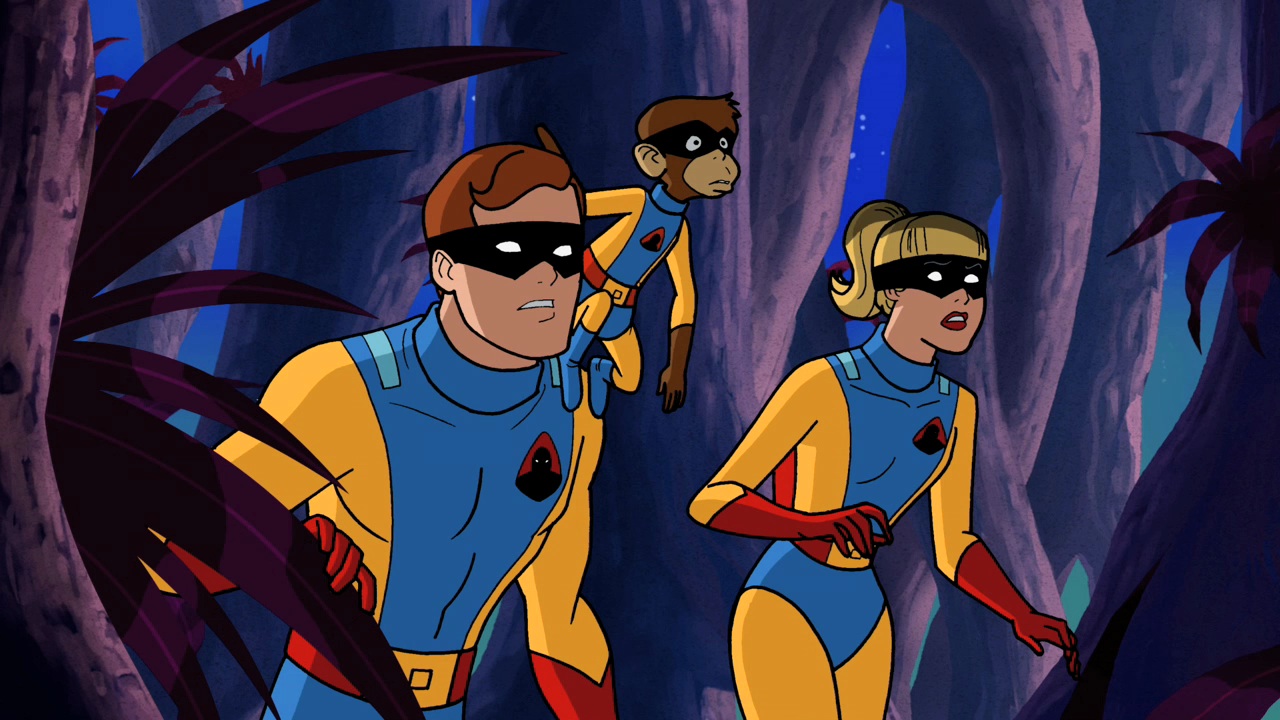 Decades later, Space Ghost and his crew teamed up with the Caped Crusader on Batman: The Brave and the Bold.

One thing doing The Comic Book History of Animation has impressed upon me is how vastly superior today’s kids shows are to what I had when I was eating cereal on the carpet before the Boob Tube on Saturday mornings. As with any Hanna-Barbera cartoon, you should approach Space Ghost like the menu at McDonald’s: If you are looking for anything new, surprising, or challenging, you have walked into the wrong place.

There’s more formula here than in a baby-food factory explosion. Most every episode entails Jan and Jace doing something stupid, requiring Space Ghost to rescue them from this episode’s villain. Quite often it’s the monkey, Blip, the most consistently competent member of this quartet, who saves the day. 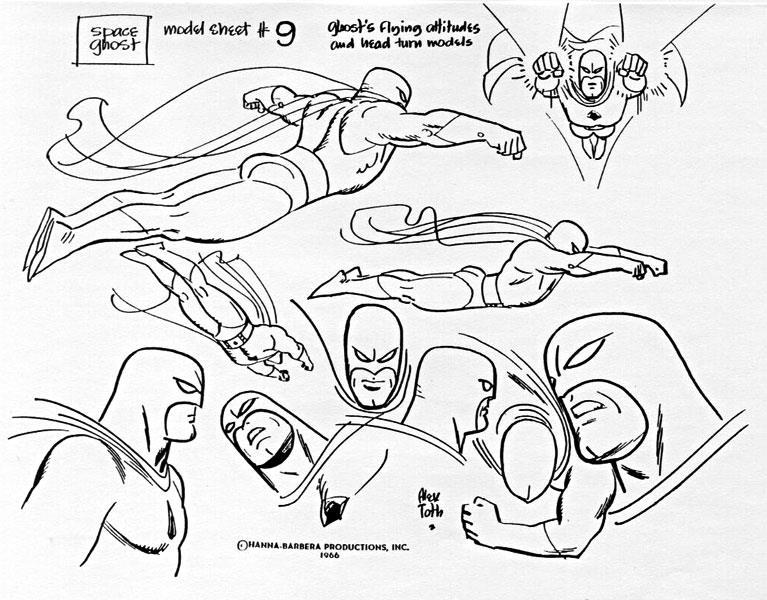 The segments are really only differentiated by the bad guys our heroes tangle with, so I’ve decided to give you the TOP 13 SPACE GHOST VILLAINS OF ALL TIME – RANKED, from the original series.

(NOTE: Space Ghost was composed of three segments per episode, two SG and one [shudder] Dino Boy. The segment list in Wikipedia doesn’t match what’s in the iTunes block I purchased; I’m sticking with the iTunes version.) 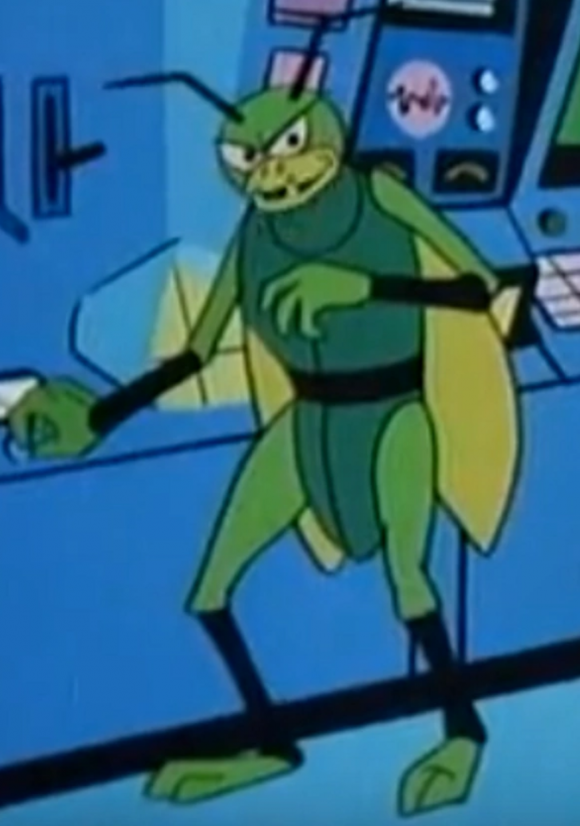 His design is terrible, but he does impressions of our heroes to lure them into a trap. Between Juilliard tuition, vocal training, and hours and hours in the film room honing his mimicry, Lokar has earned his spot on this list. 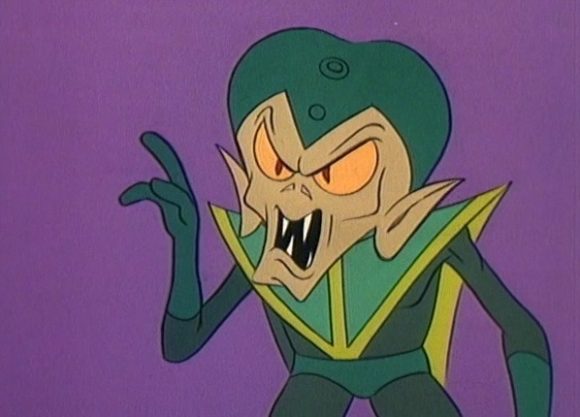 A reoccurring villain whose appearances are a classic example of what Hanna-Barbera called “limited animation,” in that he uses not just the same creatures of Bubblegum Ape and Bats of Distressing Size (my names) every time he appears, he also uses the same footage of each. 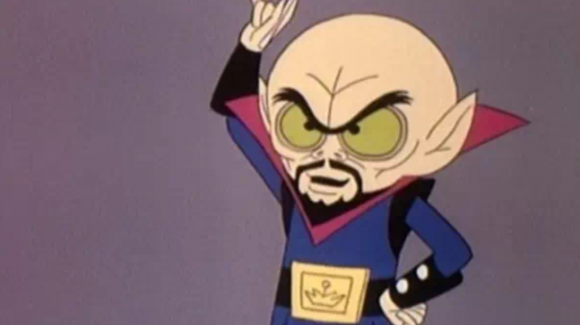 All I wrote down in my notes for this episode was, “Are they fucking with us?” I remember this wizened little dude used a wand to turn Jan and Jace into giant versions of Blip and sic a giant bird on Space Ghost, but I definitely felt like the story team at HB was running out of ideas toward the end of the run here. 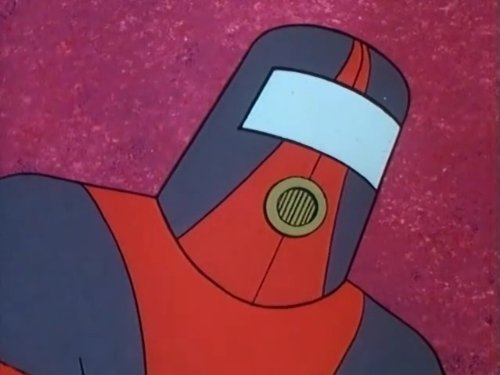 As a young… whatever species he is under that helmet, Moltar clearly built a paper mache volcano for his school science fair and the excitement it brought him charted the course of the rest of his life. Fortunately, as he spends so much time fiddling with his dials and looking at his lava men on his screen, Adult Swim could use that footage to give him the director’s chair for Space Ghost Coast to Coast.

AKA: Wait, does the Evil Collector collect evil, or is he a collector who is, himself, evil? I am a little unclear on this point.
First appearance: E7, “The Evil Collector”
Council of Doom member? No
M.O.: See “AKA”

The Evil Collector shrinks down our heroes so they can be eaten by his freakishly designed cat, Dracto. Being a superior Cat Daddy gets him a place on any TOP 13 of mine. 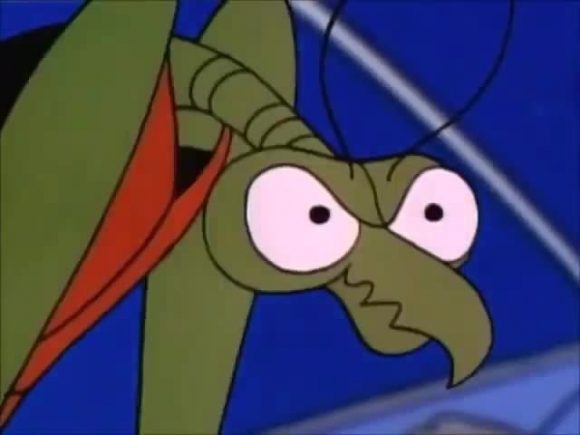 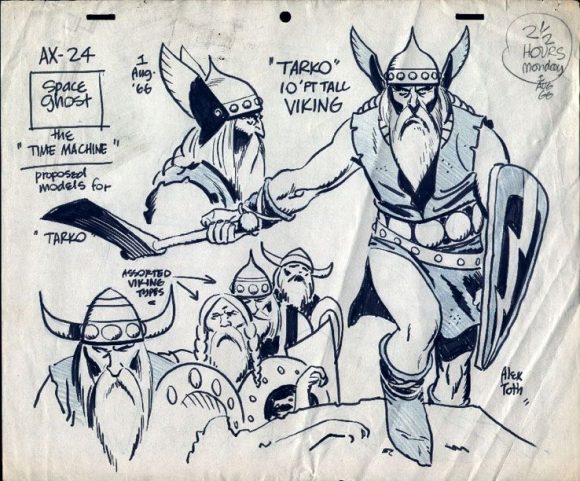 Jace is monkeying with his time machine and zaps Jan into the 12th century, where she is promptly enslaved by Tarko and his crew, who are all giants for some reason. After Space Ghost kicks his ass, Tarko basically falls in love with him and begs him to join his crew, but he prefers the indoor plumbing and illegal slavery of his era. 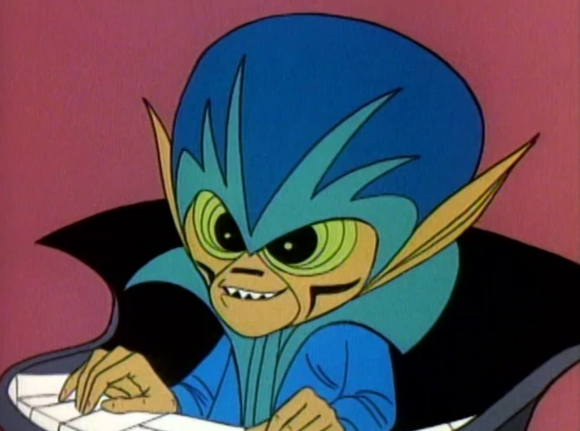 AKA: “Aw, he’s a cute little villain!” — My Wife
First appearance: E14, “Jungle Planet”
Council of Doom Member? No
M.O.: Look, they call him the Mind Taker, not the Mind Giver-Backer.

Quite a number of Space Ghost villains are little people, which I strongly suspect is so the ever-efficiency-minded Hanna-Barbera could draw 30 percent less character per frame. Mind Taker is even more cost-conscious because he’s in a floating MODOK chair so you don’t even have to make his legs and feet move. He wants to drain the minds of both Space Ghost and Processor Cordac, so Jan and Jace have to save the day for once. 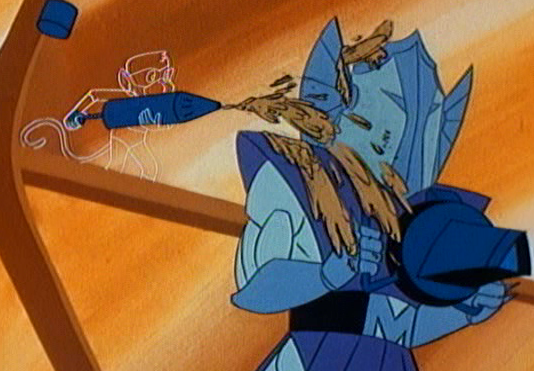 Metallus talks a lot trash for a guy with a fancy urinal on his head. He wears my favorite kind of armor, which is molded to look like it has muscles so from a distance, the wearer seems really cut. Metallus has an army of metal screws at his command, which has got to be a metaphor for something. A great motivational speaker, when he takes over the Ghost Planet he actually says, “Good work, robots” which is more encouragement than most of these maniacs’ put-upon underlings get. Zorket is a pretty generic planetary ruler distinguished, like so many other Space Ghost villains, by the awesomeness of the creatures he commands, in this instance these gonzo-designed rock robots, who look like a cross between Brutalist architecture and Salvador Dali. 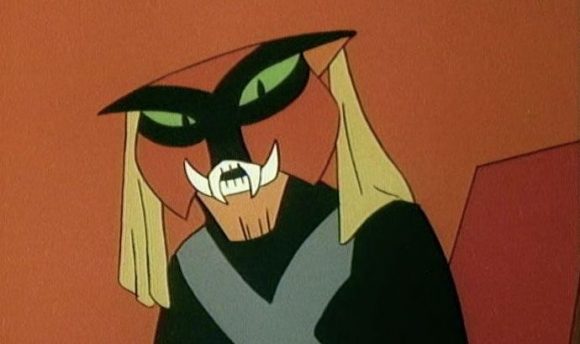 Brak is my favorite Space Ghost Coast to Coast character, but I also like him in his villainous incarnation because he has a comprehensible motivation: He’s not out to conquer the universe or kill Space Ghost for some unexplained infraction from before the series started. He likes to fly around with his family and steal shit. He’s patriarch of a troublesome clan of alien rednecks, and the galaxy is the better for it. 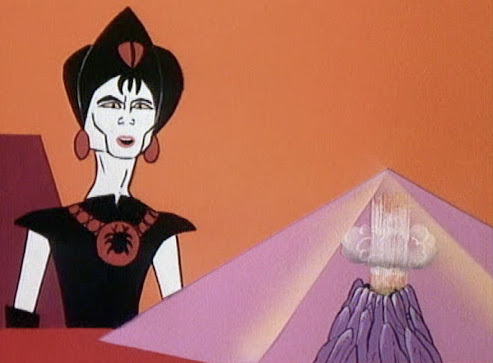 In her first appearance, when she was named Black Widow, she commands a bunch of amazingly designed “Taranta-Pods” that shoot murderous spitballs out of their antennae. When she next appeared, she was renamed Spider Woman, maybe because of the identically-named, Tallaluah Bankhead-incarnated supervillain on Batman ’66? I doubt it was because of Marvel’s Natasha Romanoff, who didn’t have that kind of pull in 1966-67. Ginny Tyler, who plays Jan, also voices this Gloria Swanson-esque baddie. AKA: “The Drone”
First appearance: E4, “The Drone”
Council of Doom member? No
M.O.: Carjacking Roomba

I love the design of this weird little robot a nameless bad guy drops off on the Ghost Planet to steal the Phantom Cruiser and then try to murder its owner with it. When it tries to escape our heroes, it flails its arms like a Muppet and it’s hilarious.