Halloween, one of my favorite holidays, was last weekend. But just like some people won’t take their Christmas lights down until March, I’m still a sucker for anything that moans and groans well after Oct. 31 passes.

So here’s something groovy to check out: Dynamite has been running a Kickstarter for its latest Elvira project — by Elvira herself, co-writer David Avallone and artist Dave Acosta. The post-apocalyptic comedy — Omega Ma’am — has already been funded, so that means this is a done deal. But there are still all those fancy bonuses to check out, so click here for a gander. 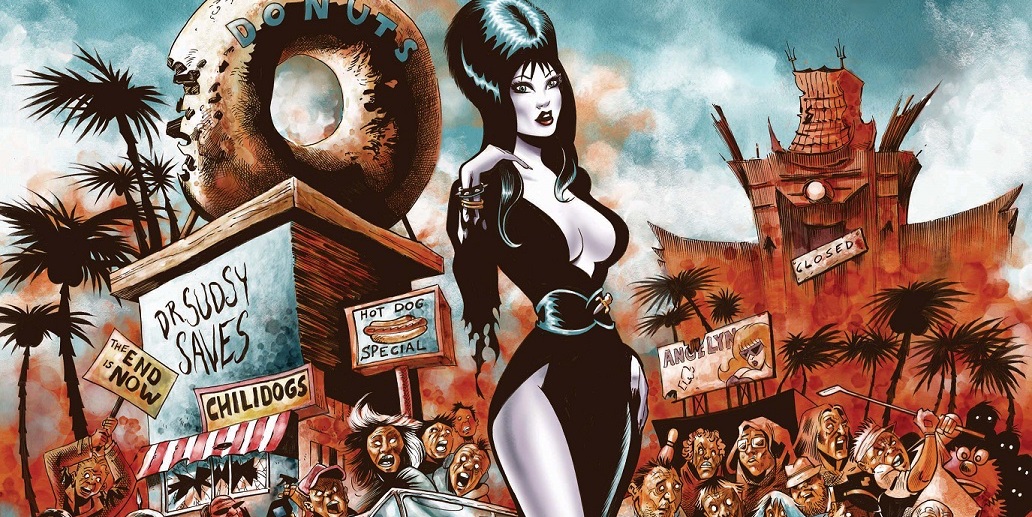 Meantime, David Avallone was game to put together his TOP 13 list of Elvira covers — totally not ranked — going back to her rise in the ’80s and featuring some of the greatest artists ever to put pencil to page. 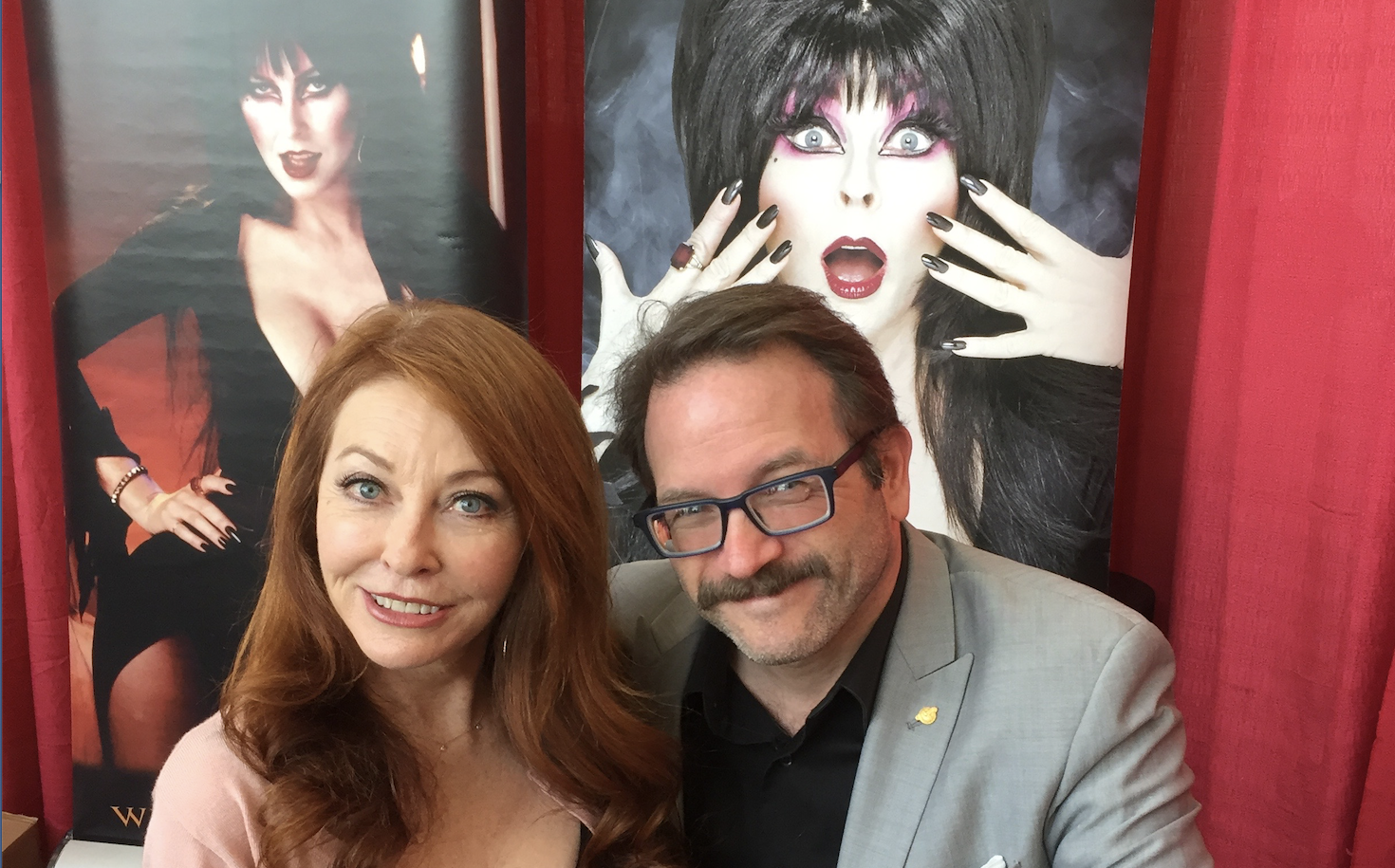 Look, you can’t ask me to choose which among my children is my favorite. I am informed by Vincent Faust of Dynamite that even if I limited this to covers of Elvira comics I’ve written — which even I am not a big enough egomaniac to do — that would be 65 covers. Sixty-five! All amazing, all by incredible artists whose talent I envy.

And on top of that, you’ve got Elvira’s impressive history in comics, with some covers by absolute legends… covers I saw and admired long before I ever knew I’d be Elvira’s scribe for a time.

It bugs me that there are artists who did amazing work on the series but couldn’t fit on the list, and they wouldn’t let me expand to 20. (I’m a heartless bastard. – Dan) I also decided no one was allowed more than one cover, so I could celebrate the maximum number of exceptional artists. So here are 13 I particularly love, in a kinda stream-of-consciousness order, starting with the woman herself:

1. Elvira: Mistress of the Dark #1, Photo Cover, Dynamite, July 2018. You never forget your first Elvira photo cover. This is the one I had Cassandra/Elvira sign for me, and I cherish it. I love the EC styling and the iconic picture. 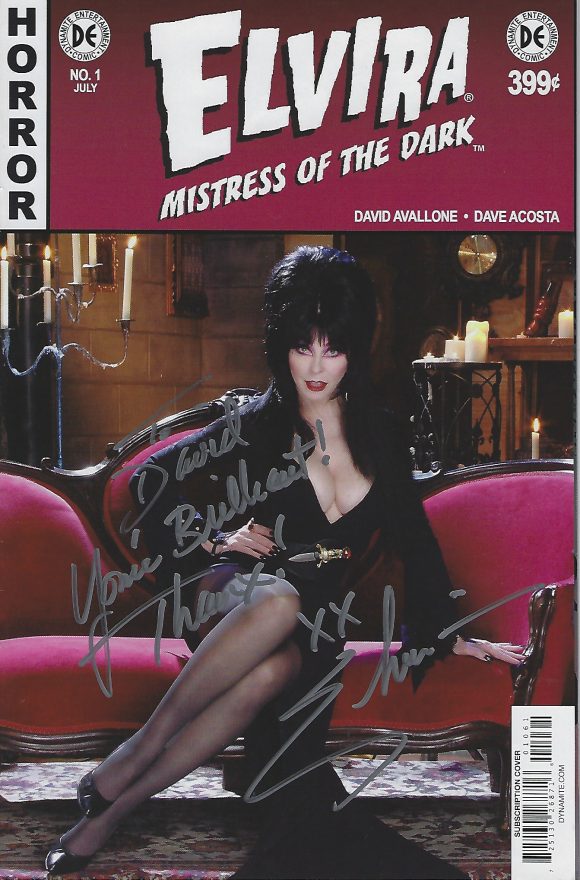 2. Elvira’s House of Mystery #11, Dave Stevens, DC, Jan. 1987. By 1987, I was already a big fan of Dave Stevens, so this cover easily caught my eye. On top of Dave’s brilliance, there’s also a retro-reference thing going on: this cover is a hat-tip to the classic pin-up artist Gil Elvgren’s 1958 witch-on-broomstick painting. Dave, as you probably know, died tragically young and I’m very sorry I never got a chance to meet him… or work with him. 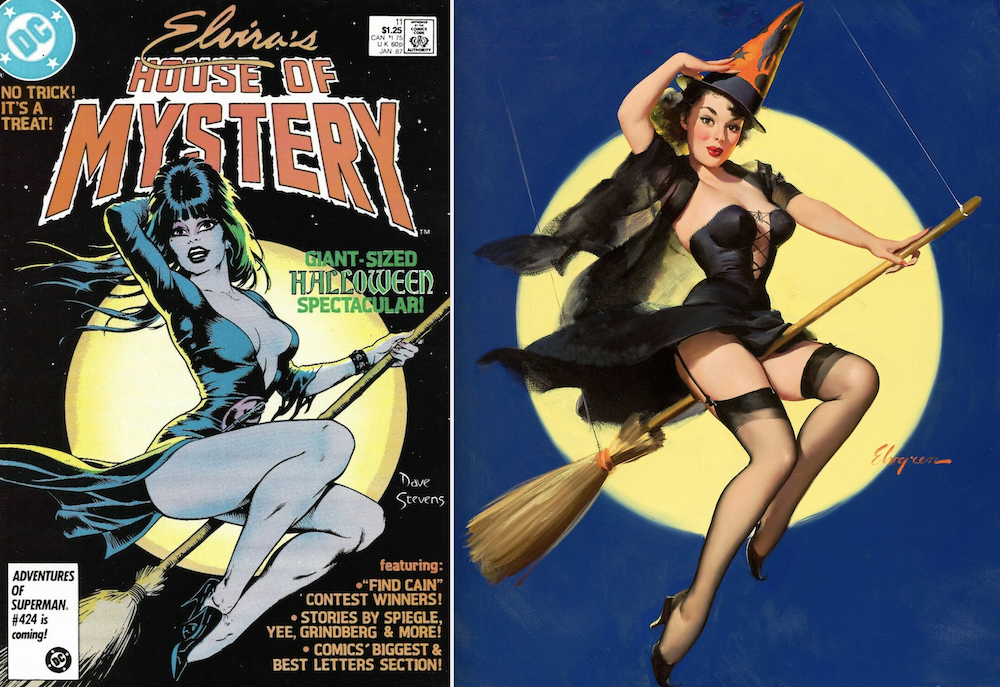 3. Elvira: Mistress of the Dark #9, Kevin Eastman, Dynamite, April 2019. I am, by any measure, a very lucky person. One of the luckiest things that ever happened to me was meeting Kevin Eastman — co-creator of a certain quartet of ninja turtles — at Emerald City Comic Con in 2015. We became fast friends, and went on to co-create our own comic, Drawing Blood (which you can check out here). A few years later, Kevin was kind enough to offer to do an Elvira cover, and naturally I was thrilled. He came through with this fantastic piece for Issue #9, kicking off a “witch” arc. 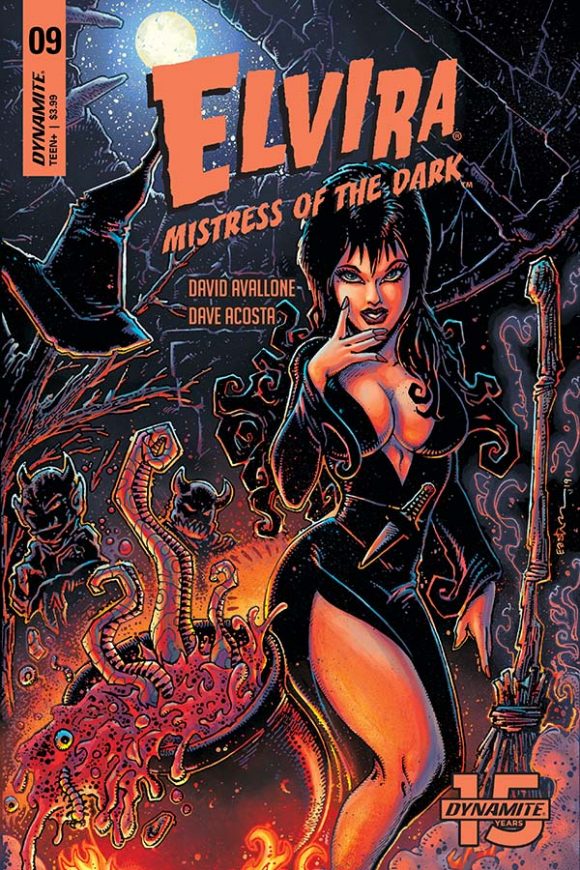 4. Elvira’s House of Mystery #7, Bill Sienkiewicz, DC, Sept. 1986. Speaking of comics legends who are just the nicest guys in the world, Bill Sienkiewicz did this striking Robot Elvira cover, with a dubious-looking Adam Strange. Don’t try it Adam: She’s out of your league. The robo-bats crack me up, and I just love how much Gil Kane there is in that Adam Strange figure. The world needs MORE Elvira Meets Superhero stories. BRING ME SUPERHEROES. 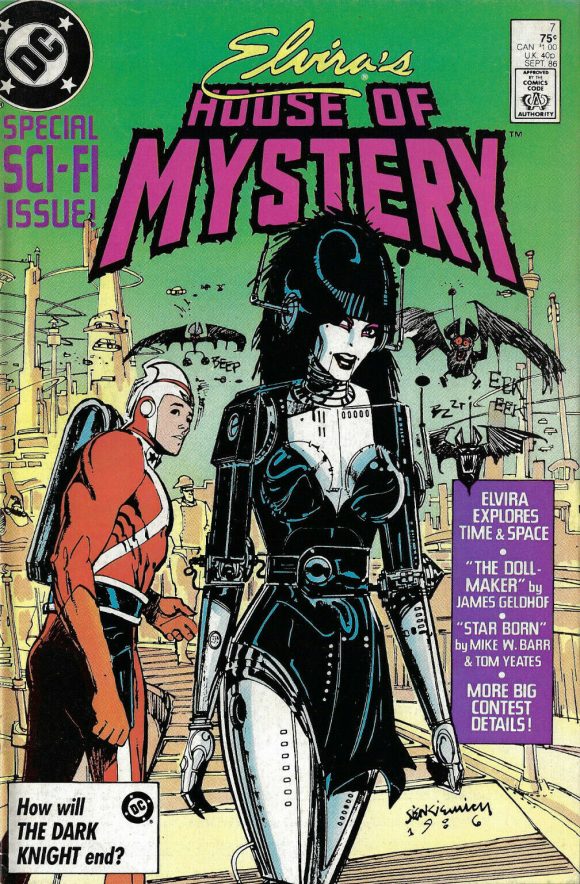 5. The Shape of Elvira #2, Francesco Francavilla, Dynamite, Feb. 2019. The Shape of Elvira was a fun, silly miniseries, a parody of Shape of Water, and when I saw this cover I thought it was almost too hauntingly gorgeous for the comic it was wrapped around. Francesco captures Elvira’s beauty perfectly, and this cover made me want to do a Swamp Thing series with him. Call us, DC. 6. Elvira’s House of Mystery #1, Brian Bolland, DC, Jan. 1986. DC kicked off Elvira’s House of Mystery with a bang: the great Brian Bolland. I was already a fan of his from the Camelot 3000 series when this issue hit the stands. For some reason, Elvira looks particularly ’80s here, and I love Bolland’s little monsters attending her. I also miss dialogue balloons on covers. We should go back to that… 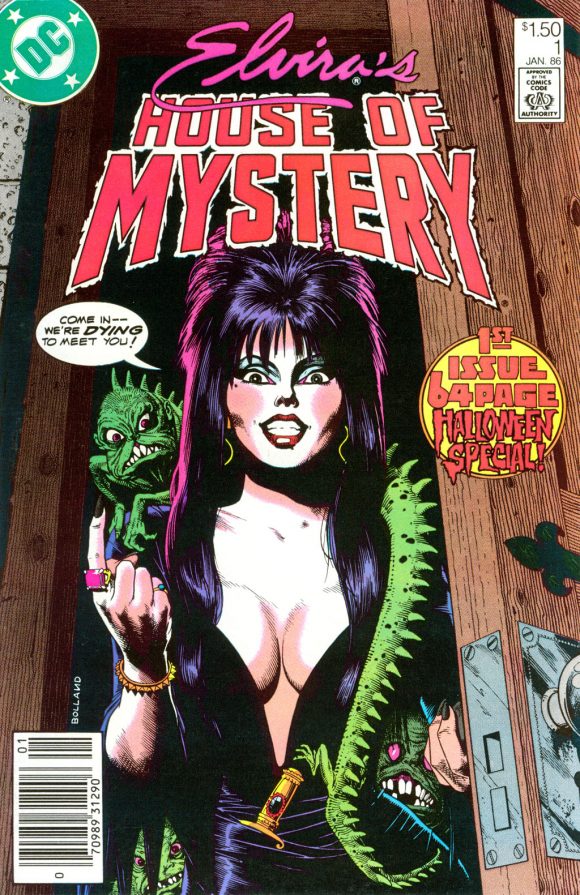 7. Elvira: Mistress of the Dark #1, J. Bone, Dynamite, July 2018. In stark contrast to the relatively realistic rendering (say that four times fast) of Bolland, here’s a wonderful piece of cartoon whimsy from J. Bone. Elvira #1 had so many great covers, but this one made me laugh out loud when I saw it. The self-satisfied gill man (foreshadowing Shape of Elvira), the Hellboy-looking Beach Frankenstein, the Gilligan Vampire? All hilarious and perfect, and a great caricature of our leading lady. 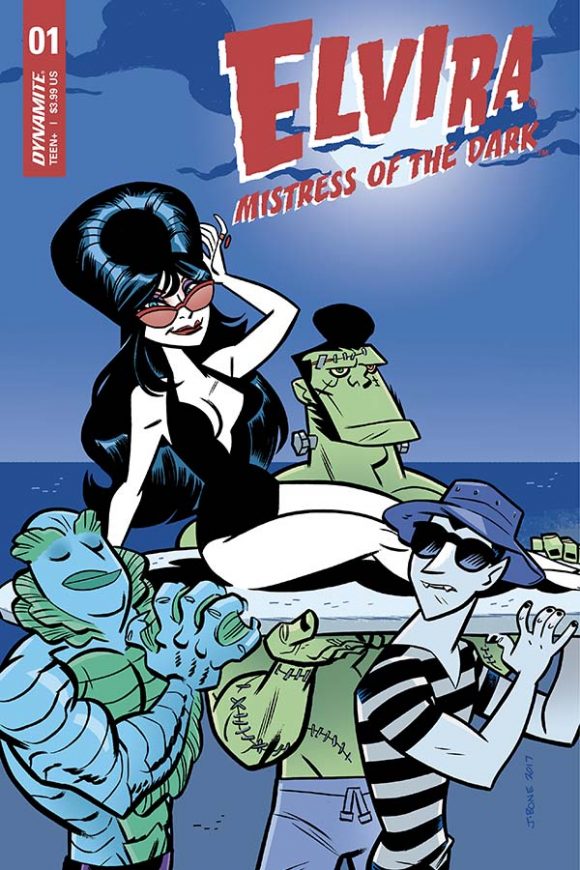 8. Elvira’s House of Mystery #3, Denys Cowan & Dick Giordano, DC, May 1986. Two more comics legends and another cover with a dialogue balloon. (Seriously. I’m going to make this come back if I have to do it myself.) In spite of the pin-up styles and bottomless cleavage we’ve seen… I have to note that this is the first cover in this group that is actually sexually suggestive. I hope that thing isn’t, you know, loaded. 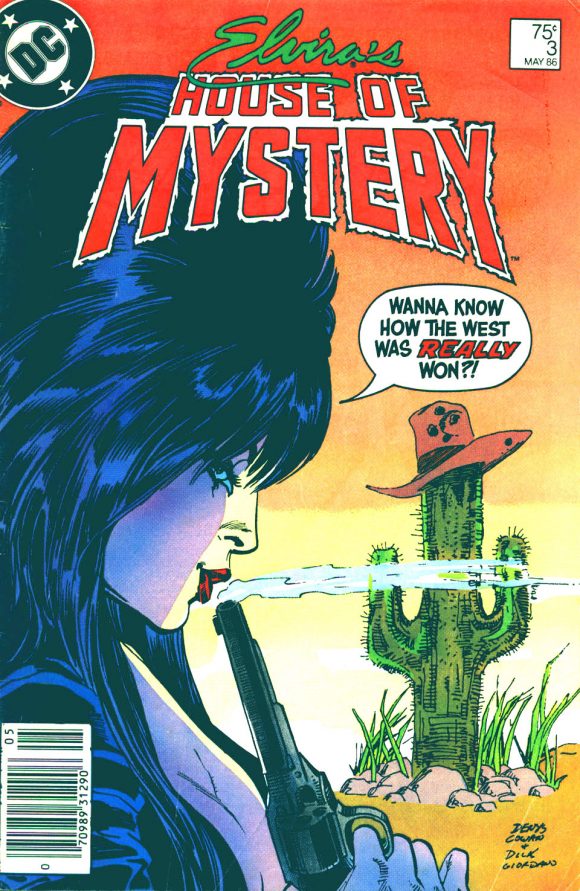 9. Elvira: Mistress of the Dark #2, Craig Cermak, Dynamite, Aug. 2018. I don’t think most fans know this: A lot of time you have no influence on the covers of your comics. A lot of artists – particularly on a book like Elvira – just do a great pinup. Some, like Craig Cermak, reach out and say, “So what happens in this issue?” I said, “She meets Edgar Allen Poe, and they go up against Vlad the Impaler.” Craig took that simple sentence and came back with this fantastic cover. Poe and Elvira make a fun couple, and while Craig doesn’t portray Vlad, you can take the clue from the impaled skulls. Perfect mood-setter for the comic inside. 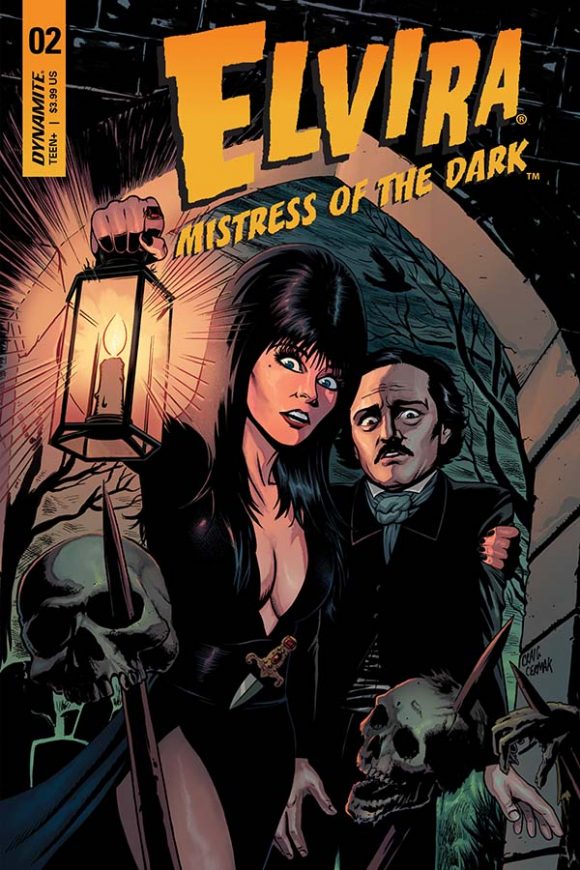 10. Elvira Mistress of the Dark, #1, Joe Jusko, Marvel, 1988. This has a special place in my heart, because it’s the Marvel magazine adaptation of the first Elvira movie, and the cover is just so iconic, drawing off the movie poster but adding more of a gothic twist. Special points for being the first appearance of Gonk on this list. 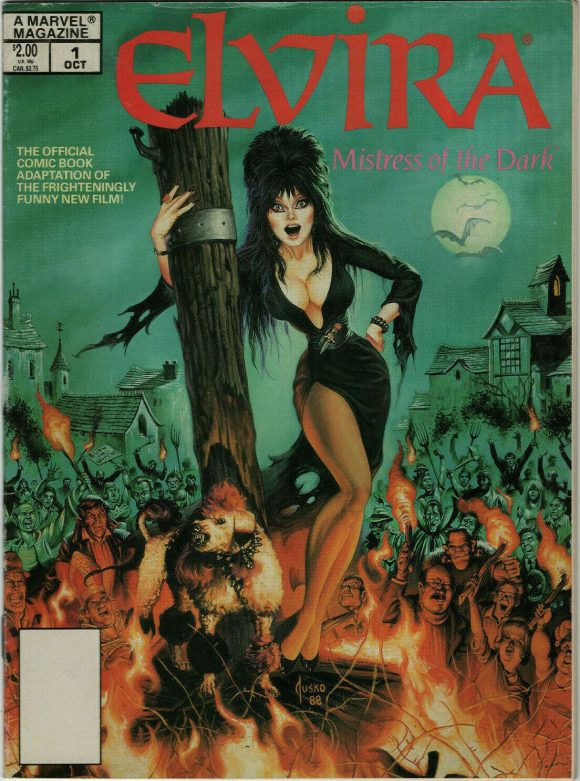 11. Elvira’s House of Mystery #10, Joe Orlando, DC, Dec. 1986. Yet another comics legend: I grew up with Joe Orlando mostly as one of DC’s best editors (his Weird War comics were a HUGE influence on me), but he started as an artist at EC, and was later an illustrator and writer at Warren’s Creepy. If my Elvira comics have any kind of DNA in them, it’s half EC’s Mad Magazine, and half Creepy. I’d like to point out the Cthulhu chalkboard joke: When this comic was printing, Lovecraft’s mythos was still a pretty niche reference to make for horror diehards. 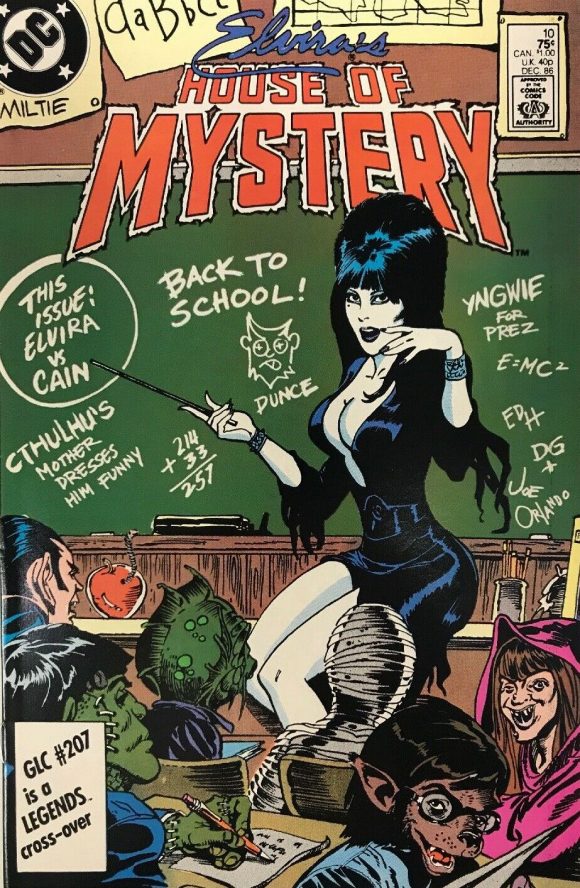 12. Elvira: Mistress of the Dark #12, John Royle, Dynamite, July 2019. This cover actually inspired the material inside it, rather than the other way around. John Royle is, of course, an amazing artist. I was in the middle of wrapping up the second arc of Elvira: Mistress of the Dark and pondering what I was going to do in the third one when John reached out and told me for his final Elvira cover of this series he really wanted to recreate this goofy Titanic scene with Elvira and Dracula. I thought that was a brilliant idea. So brilliant, in fact, that I asked for a favor: instead of a generic Dracula… could it be Dave Acosta’s great Vlad the Impaler design who was our running villain in the series? 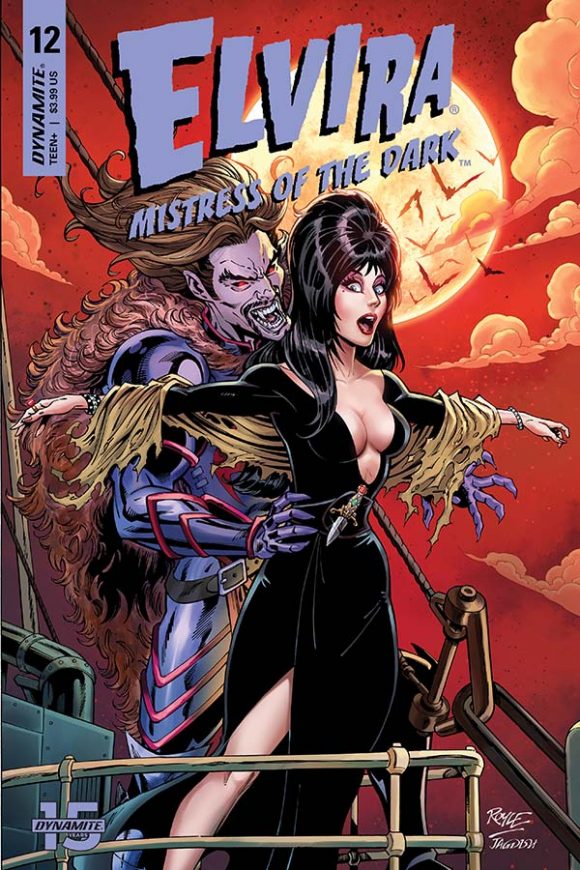 John happily accepted (though I bet he could have fetched more for the original art if it was just any old Drac). And that got me thinking: I had killed Vlad in the first arc, and stuck him in Hell in the second… but maybe the climax of the series would be a cult resurrecting him. So the entire third arc was suggested by this one funny cover idea. It works like that sometimes: If you’re open to it, the collaborative part of this art form can be its best feature.

13. Elvira: Mistress of the Dark/The Omega Ma’am, Dave Acosta, Dynamite, 2021. I’m cheating a bit… but it’s my column. This hasn’t been released yet: It’s for the Elvira project currently funding on Kickstarter (and kicking ass). You can donate and be the first kid on your block to get a copy, here. Dave Acosta was the series artist on Elvira #1-12 and we were very happy he was available to do interiors on this special. He also came up with this 1960s Jack Davis movie poster cover — Elvira surrounded by the orange zombies known as “Sudsies” (you’ll understand it when you read the book, and by Los Angeles landmarks). 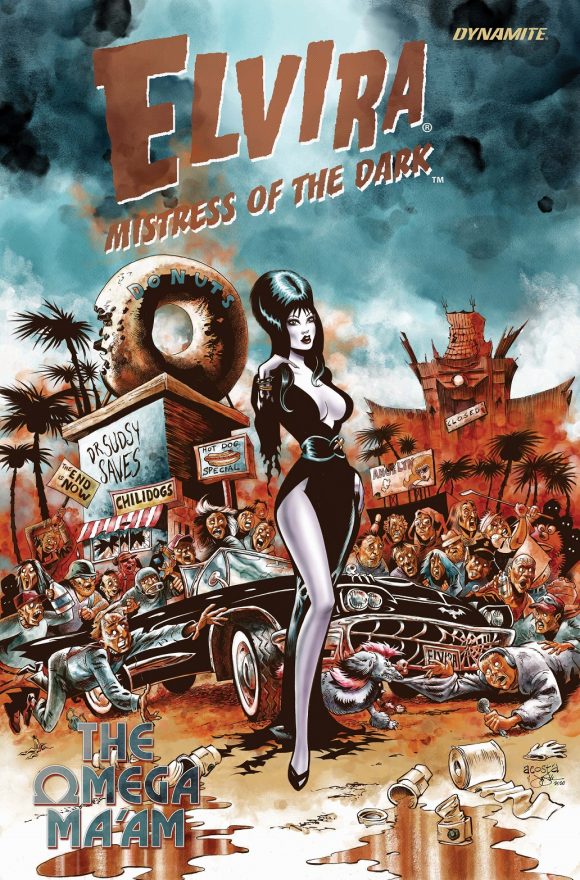 Dave has been my invaluable partner on this book; so much of what’s great about it comes from his input, his ability to really capture Elvira visually — and not just the mere likeness. He “gets” Elvira. Her body language, her facial expressions, her entire attitude. He did some great covers for Shape of Elvira as well, but rules are rules…  so I settled on this post-apocalyptic beauty.

I hope you didn’t get dizzy, flipping from the ’80s to the 2010s and back again. It was fun for me to revisit those comics I first saw in my college days. (SO old.) If you’re interested, you can follow my work here. I also have another Kickstarter in progress: I’m part of an amazing horror anthology, and my piece is a tribute to the DC Weird War series mentioned above.

Check it out! And thanks for reading.