A BIRTHDAY CELEBRATION: The best of Batman’s greatest writer…

No, all the late Denny O’Neil did was create a body of work filled with such groundbreaking passion, pathos and adventure that it remains unmatched to this day. 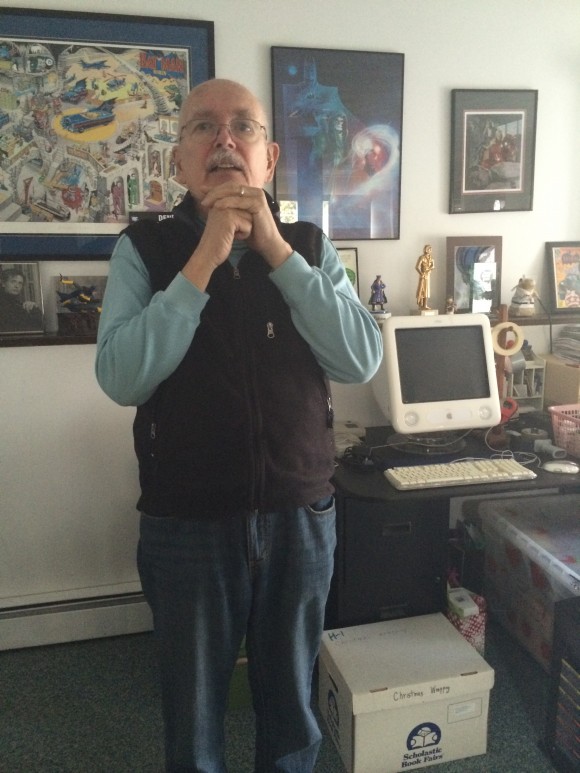 O’Neil in his home study

Throughout his prime Batman writing years of the ’70s, O’Neil could do it all – and did: from huge, multipart epics to quiet personal dramas. Even his B-Level stories were indelibly Denny: He had a unique take on the Riddler in Batman #263’s Riddler On the Move!; in just a few pages, he gave Batwoman more personality than she’d ever had — before killing her off in Detective Comics #485’s The Vengeance Vow!; he even lampooned himself in Detective Comics #487’s The Perils of Sergius.

I’m always surprised whenever I encounter a Denny O’Neil dud – and there were duds. He worked on the Darknight Detective enough times that, like the Rolling Stones, not every track tracked. But if Englehart and Rogers’ Detective run is Exile on Main Street, a brilliantly interwoven tapestry of plot, theme and mood, then O’Neil’s on-and-off tenure in Gotham amounted to Let It Bleed –where one great song is piled on top of another to the point where you think it’s a greatest hits album. (And I’m not even including his brilliant non-Batwork like Green Lantern/Green Arrow and The Question.) You could argue that Denny’s bibliography as a writer outweighs his contributions as an editor, with the very obvious exceptions being The Dark Knight Returns and Batman: Year One. But then again, his writing credits are impossible to match and when you read his best work – or even his second-best work — you always know: That’s a Denny O’Neil story.

These are — the TOP 13 DENNY O’NEIL BATMAN STORIES – RANKED.

13. The Joker #1, The Joker’s Double Jeopardy! (May 1975). The first (and best) issue of the short-lived The Joker, in which the Clown Prince of Crime is challenged by Two-Face. Denny – with art by Irv Novick and Dick Giordano — proved here that you could write a great story about a homicidal maniac under the Comics Code – but that it would be nearly impossible to repeat the feat as the title quickly devolved into a series of somewhat silly, if entertaining, misadventures. 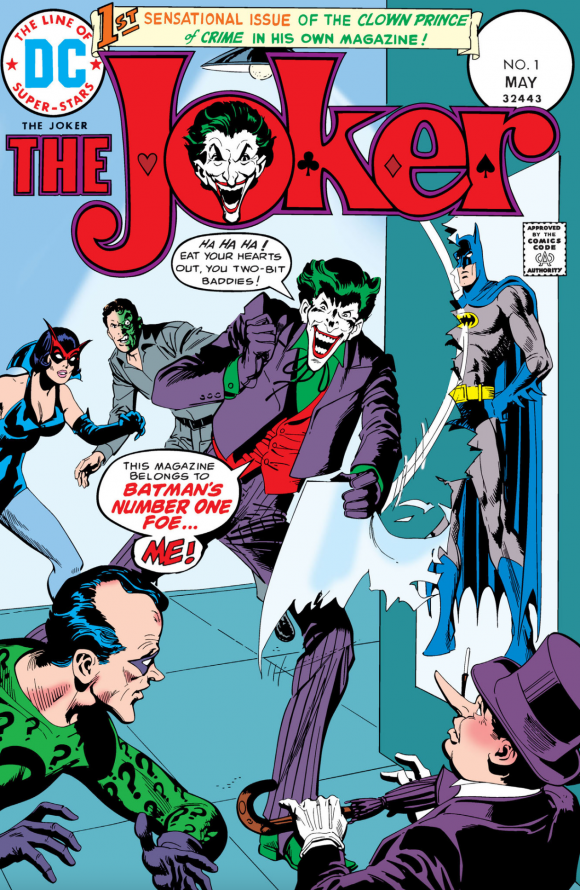 12. Batman #259, The Night of the Shadow! (Nov.-Dec. 1974). It’s stunty to team up Batman with the Shadow but underneath this tale is an exploration of Bruce Wayne’s aversion to guns, borne of PTSD that took root even before his parents were murdered. O’Neil always had politics on his mind and this one serves as an effective anti-gun message that further deepens Batman’s character. 11. Detective Comics #481, Ticket to Tragedy (Dec. 1978-Jan. 1979). O’Neil’s best-known collaborator is, of course Neal Adams. But here the writer is paired with one of the other all-time great Bat-pencillers, Marshall Rogers. The story – about Batman’s trans-Atlantic race against time to solve a murder – is somewhat contrived but gripping nonetheless, aided significantly because of the combined talents of two of the very best in the business. (They also proved to be a great match on 1978’s illustrated prose short story Death Strikes at Midnight and Three, from DC Special Series #15.) 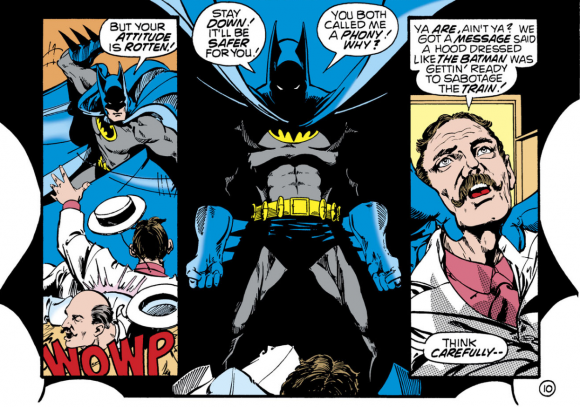 10. Detective Comics #395, The Secret of the Waiting Graves (Jan. 1970). This classic is often considered Batman’s turning point as the Silver Age crossed into the Bronze Age and the Darknight Detective returned to his gothic roots. That’s really not the case because other writers and artists were already doing their part. But this relatively simple, if chilling, tale – O’Neil’s first Bat-collaboration with Adams (and Giordano) – really emphasized the potential of the Caped Crusader as a viable, dramatic character like no other story up to that point. Still, as compelling as it was, the best was yet to come. 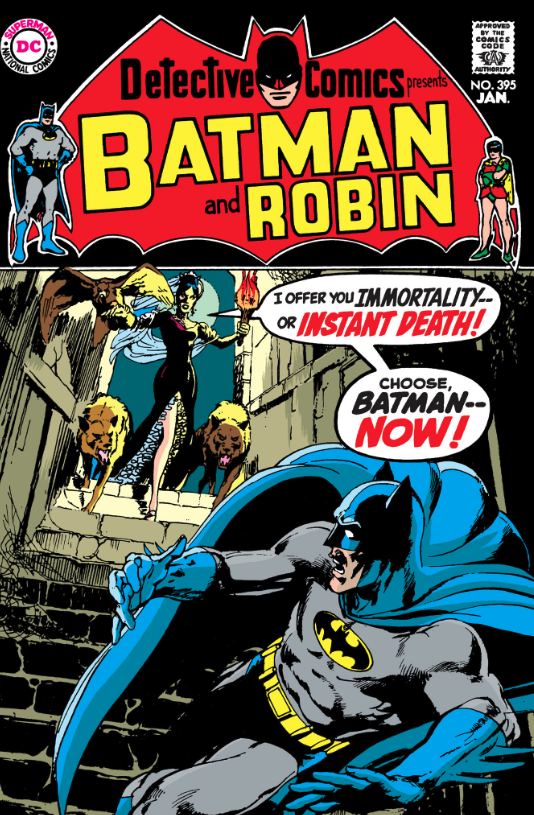 9. Detective Comics #410, A Vow From the Grave! (April 1971). When I was younger I found this murder mystery involving Tod Browning-esque circus freaks really hard to read. It was too upsetting and grotesque for younger eyes, I suppose. But as an adult, I recognize this Neal Adams/Dick Giordano-illustrated story as a minor masterpiece of empathy and kindness. 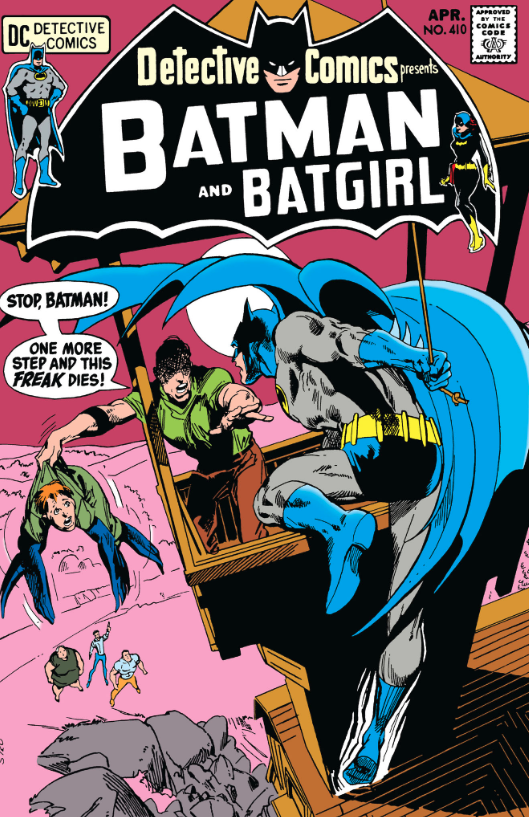 8. Batman #234, Half an Evil (Aug. 1971). Two-Face had largely been on the shelf since the 1950s, but O’Neil, Adams and Giordano smartly recognized Harvey Dent’s potential as a villain who could thrive as comics matured. Two-Face was created in the Golden Age but his second go-around as an A-Lister proved far more durable, with the Jekyll-Hyde villain claiming a spot near the top of Batman’s rogues gallery for the ensuing decades. 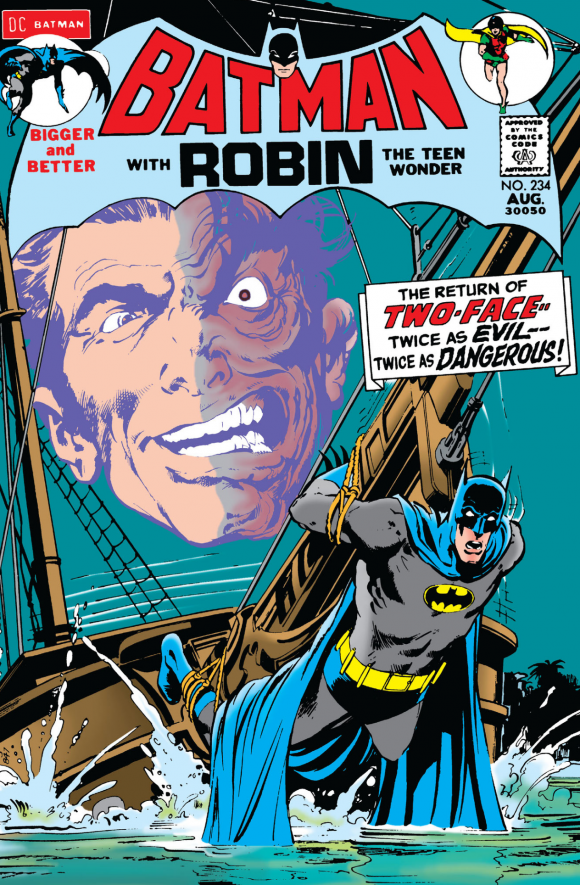 7. Batman #242, Bruce Wayne – Rest In Peace! (June 1972). I debated whether to make the original Ra’s al Ghul saga its own entry but ultimately decided to break out its best parts because not every chapter was created equal. This Irv Novick/Giordano-drawn issue is the first part of the saga-ending trilogy and sets the Batman down his inexorable path toward a final conflict with the Demon’s Head. (It also introduced Matches Malone!) 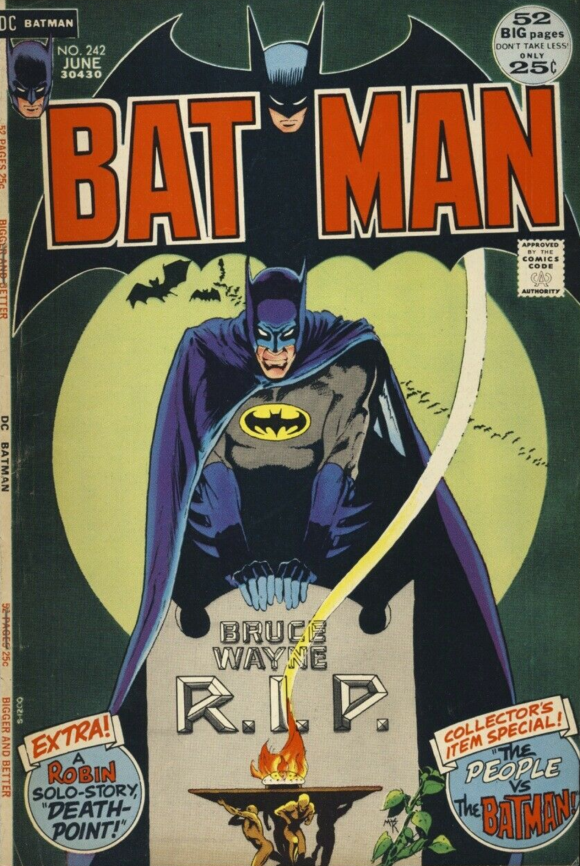 6. Batman #243, The Lazarus Pit! (Aug. 1972). Adams and Giordano are back as the Caped Crusader and a mismatched team of civilian aides take the fight to Ra’s al Ghul at his mountain hideaway. The last pages chillingly reveal a plot point that would be central to the Ra’s al Ghul mythos forevermore – the existence of the Lazarus Pit. (It even says so in the title!) 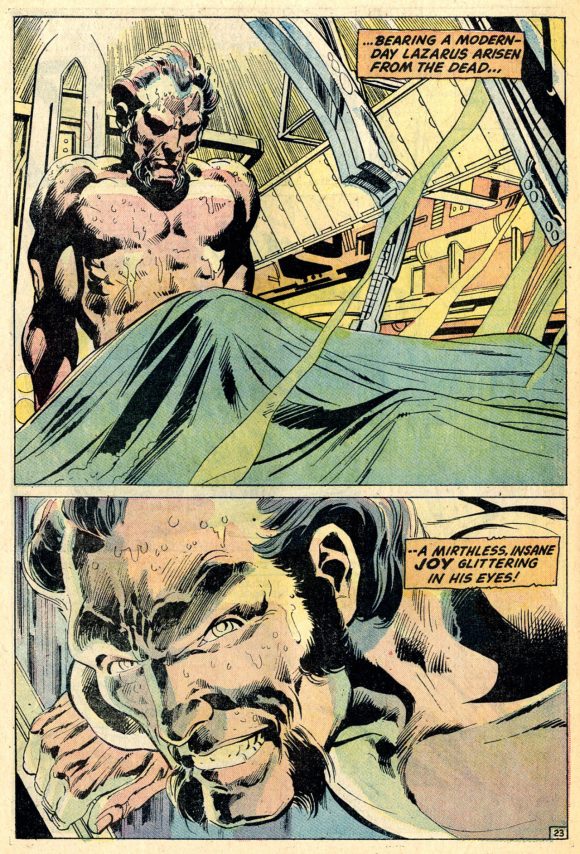 5. Batman #237, Night of the Reaper! (Dec. 1971). The greatest Halloween comic-book story ever. O’Neil – with suggestions from Bernie Wrightson and Harlan Ellison – weaves with Adams and Giordano a story that is alternately colorful and shadowy, hilarious and terrifying. But at its dark heart is the deeply agonizing legacy of the Holocaust, which O’Neil uses not for cheap storytelling but to tell a tale of human anguish and misguided revenge. 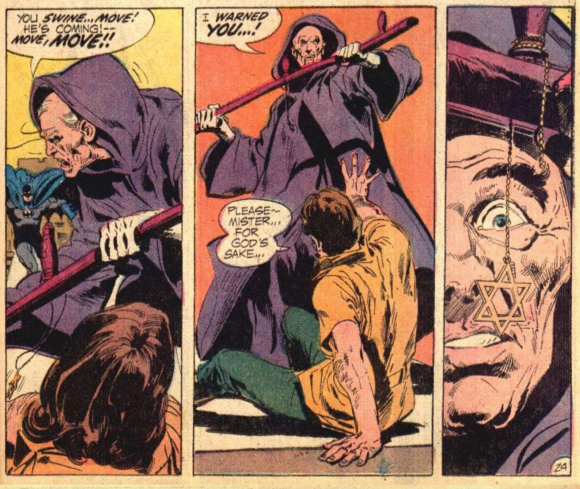 4. Detective Comics #457, There Is No Hope In Crime Alley! (March 1976). O’Neil’s most personal tale, illustrated by Dick Giordano with an assist from Terry Austin. Batman makes his annual visit to the scene where his parents were murdered and pays a visit to Leslie Thompkins, whom, we learn, comforted young, traumatized Bruce Wayne as the police investigated Thomas and Martha’s ugly deaths. O’Neil probes the vicious cycle of violence, suggesting that perhaps it can only be broken by grace and selflessness. Detective Comics #483’s sequel, The Curse of Crime Alley, by O’Neil, Don Newton and Dan Adkins, continues the theme by further driving home the point (as in Batman #259), that Batman is as much a victim of PTSD as he is a man of action on a mission. 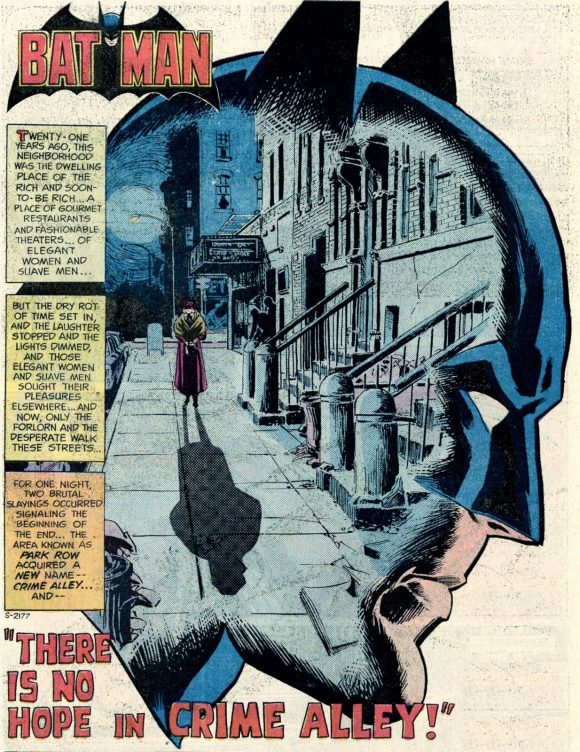 3. Batman #232, Daughter of the Demon (June 1971). O’Neil, Adams and Giordano introduce Ra’s al Ghul – giving Batman a Bondian villain who stands apart from the Gotham rogues with an ecoterroristic vision of worldwide control. The issue sends the Caped Crusader around the globe, giving us recaps of Batman and Robin’s origins along the way. The final page sets the stage for the Ra’s-Talia-Batman paradigm that would influence countless stories for the next 50 years. 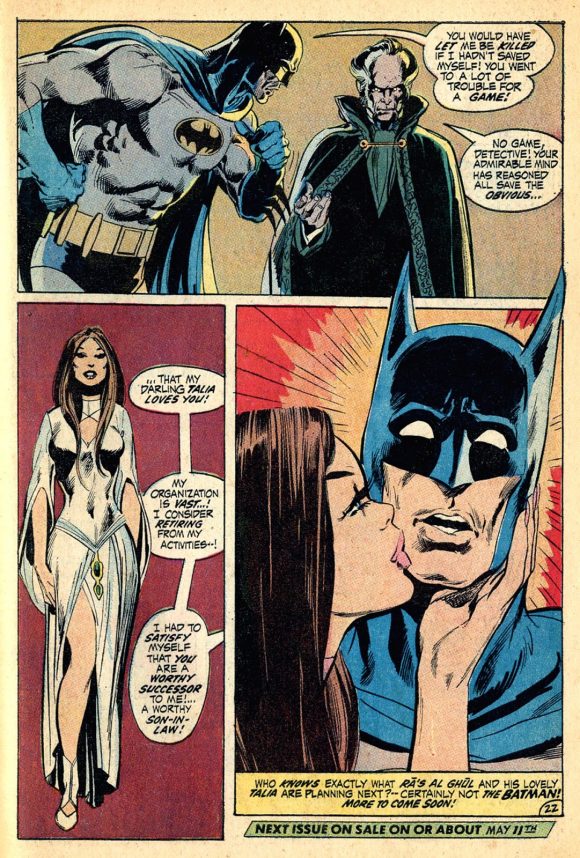 2. Batman #244, The Demon Lives Again! (Sept. 1972). The original Ra’s al Ghul saga concludes with Batman and his adversary shirtlessly dueling with swords in the desert heat, as beautiful, tearful Talia looks on. The highlight? An enraged Batman taking Ra’s out with the most astounding single punch ever put to paper — then grabbing Talia for a deep, passionate farewell kiss. O’Neil, Adams and Giordano were never more dramatic as a team. 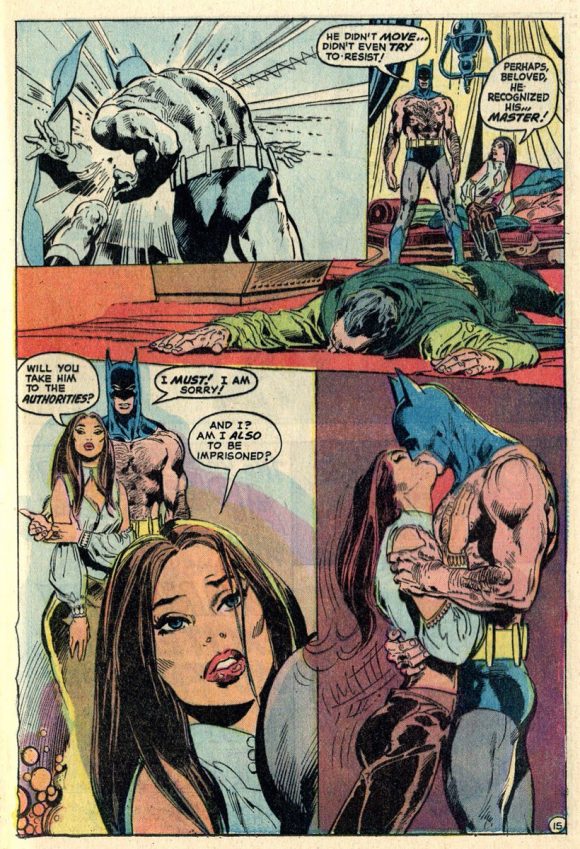 1. Batman #251, The Joker’s Five-Way Revenge! (Sept. 1973). O’Neil and Adams’ final Batman collaboration brought back the Joker after a years-long hiatus, returning him to his murderous Golden Age beginnings. Every Joker story that has been published since was built on this foundation and there isn’t a wasted moment in this taut, mano a mano game of bat and mouse. And there’s even sly, very O’Neill-esque social commentary tucked in, as well. It’s 22 1/2 pages of perfection, making this the single best self-contained Batman issue ever. Which also makes it, to my way of thinking, the single best self-contained comic book ever.