I’ve said it a bajillion times, but in my mind no comics artist did it better than Neal Adams. Fight me.

Seriously, though, he frequently dominates BRONZE AGE BONANZA because damn, were his covers great. And as many that make these lists, there are tons more that don’t make the cut but probably could.

Anyway, it’s not all Adams here of course. You’ve got your Barry Windsor-Smith, your Gil Kane, your Steve Ditko and on and on.

13. Bugaloos #1, Charlton. Had I seen this on the racks I would have begged my Mom for it. I LOVED the Bugaloos and was even Courage for Halloween, thanks to Ben Cooper. Like a lot of boys, I had a big crush on Joy, too. 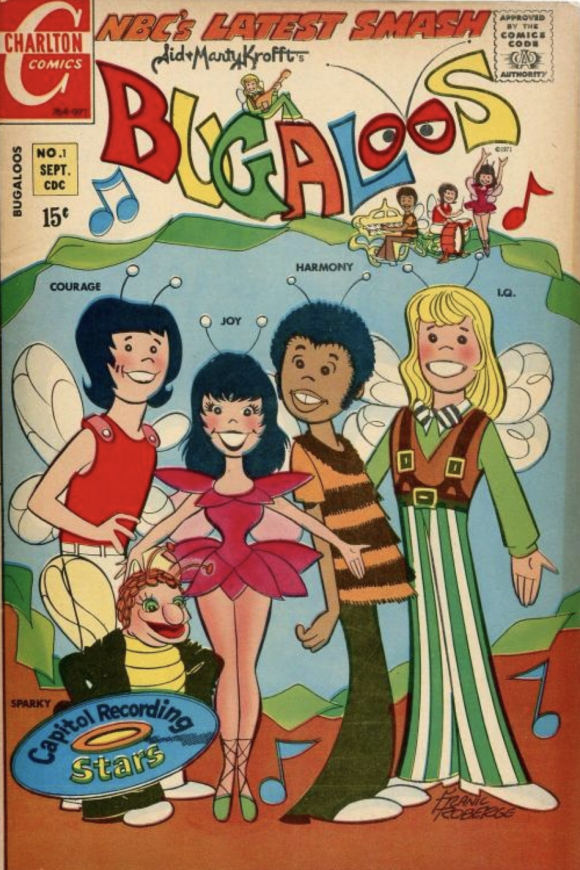 12. Ghostly Haunts #20, Charlton. Evidently this is a paste-up job using Jean Elier art from the interior. I don’t care. It works, even if, like so many Charlton covers of the day, it’s a real mishmash. Bottom line is you want to pick it up. And I’m a real sucker for “negative” covers besides. 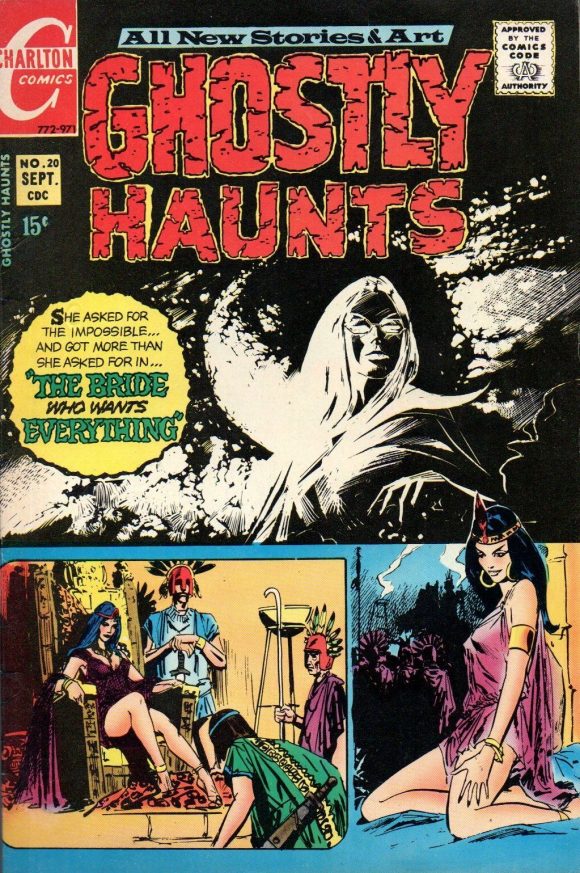 11. Superman’s Pal Jimmy Olsen #141, DC. One of Kirby’s best known DC covers simply because Don Rickles is front and center. Still one of the strangest story devices in comics. But hey, you get Kirby inked by Adams! 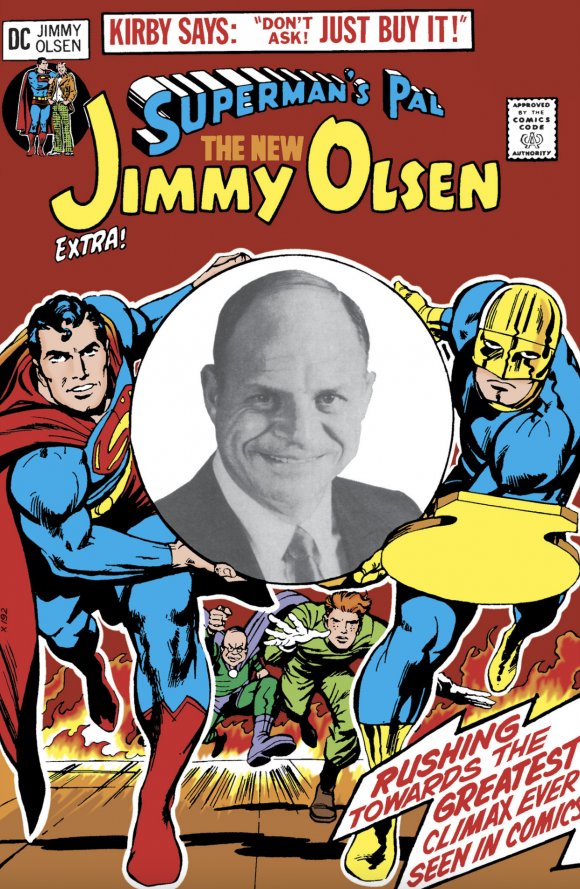 10. Fantastic Four #115, Marvel. There’s debate as to whether Big John Buscema pencilled this one or Jazzy John Romita did. (Romita did the inks.) Either way, it’s a classic FF cover. Then again, aren’t so many? 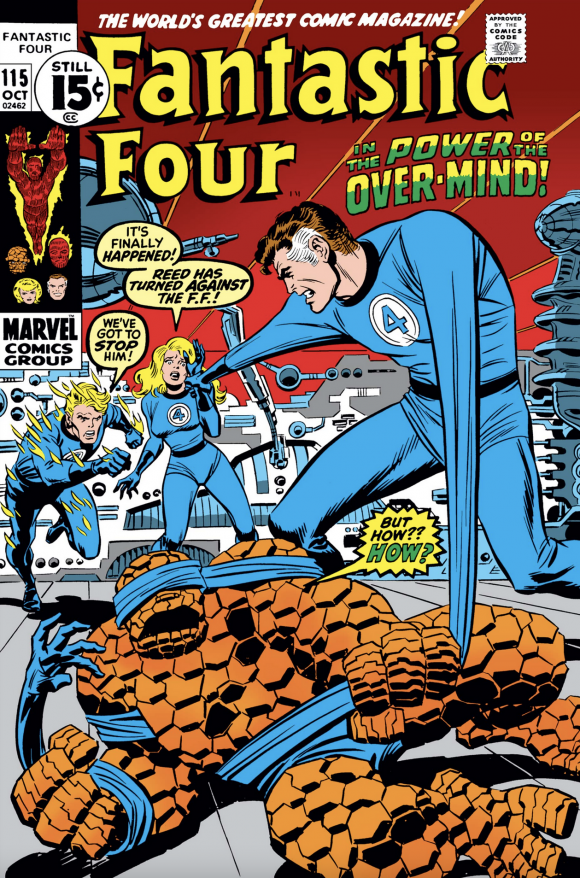 9. The Avengers #92, Marvel. Kree-Skrull War, ya’ll. A fairly static image, but an effective one nonetheless by Adams and Tom Palmer. I like the subtle way Cap looks more disappointed than angry. Because, really, that’s so much worse. Nobody wants to disappoint Captain America. 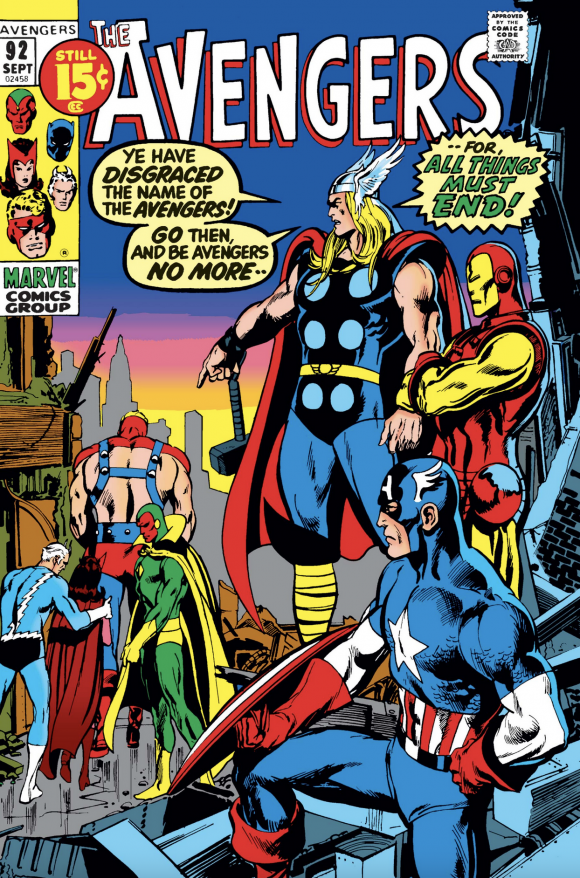 8. Conan the Barbarian #10, Marvel. Just a great, action-packed cover with a groovy red monster and Conan doing what Conan do. The woman at the bottom with the headband must be related to the running guy from Action Comics #1. 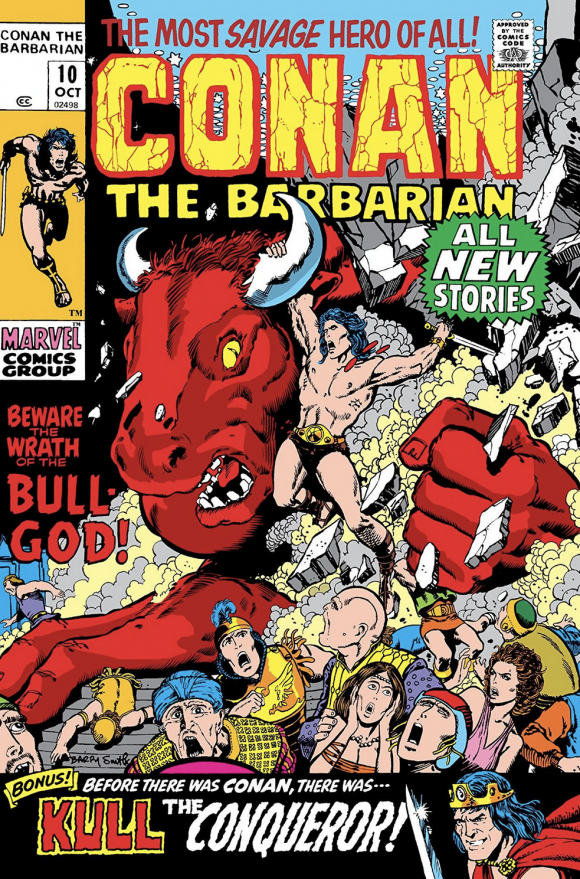 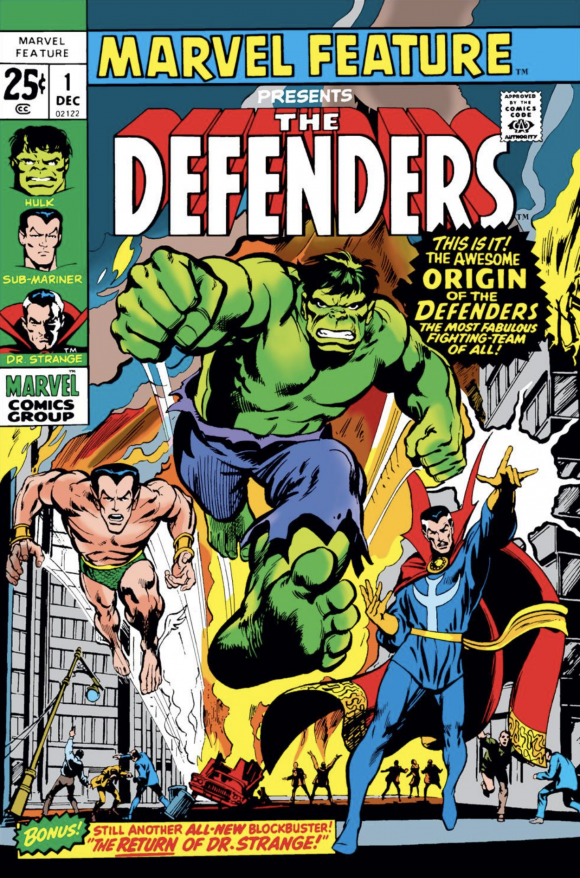 6. The Amazing Spider-Man #101, Marvel. Is this too low? It might be too low. It’s a classic to be sure and I know there are those among you who would put this at the top. I think it’s a rock-solid cover but I’ve seen it so many times it’s kind of played out for me. So maybe this is just a personal bias, even though I love both Gil Kane and John Romita. 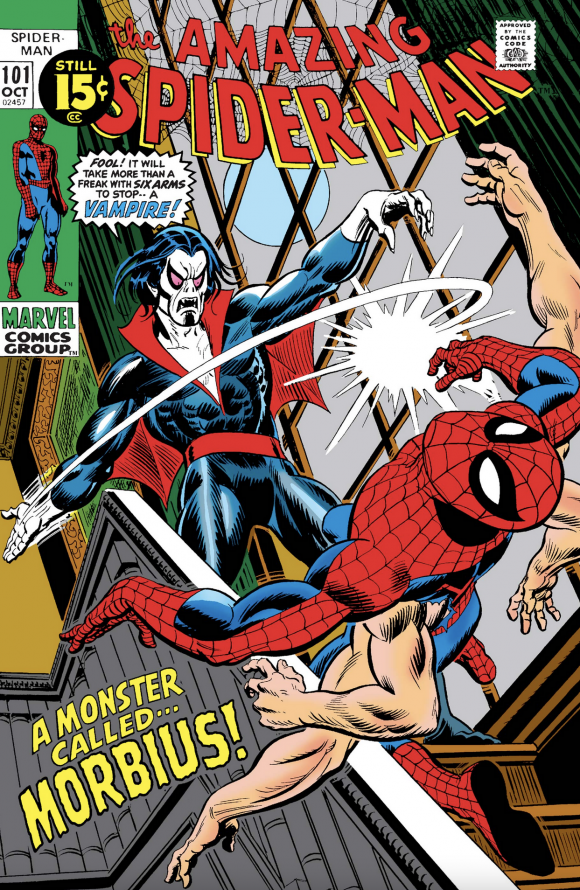 5. Justice League of America #92, DC. A floating heads extravaganza! And the Robins meet! Really, this cover is greater than the sum of its parts. It’s all in the packaging. 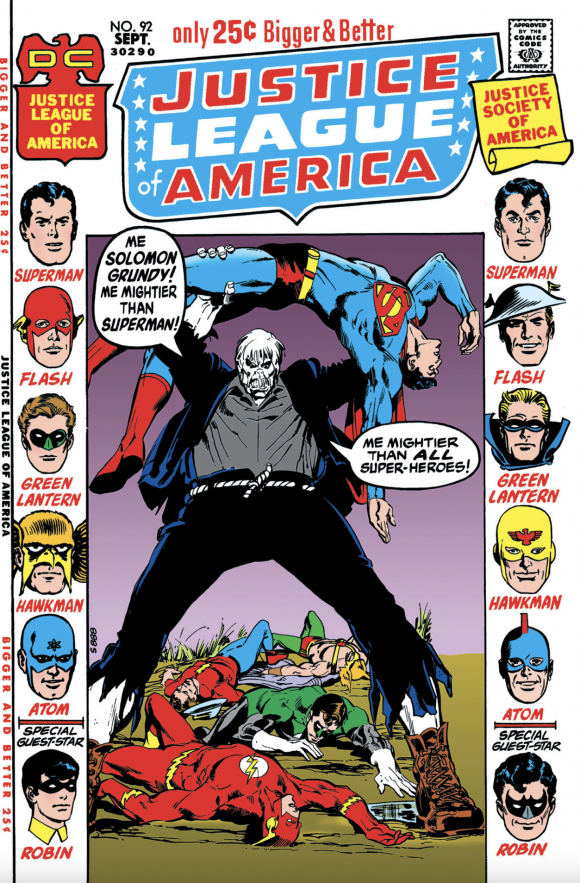 4. Daredevil #80, Marvel. This is a flat-out great cover. Dynamic action, a groovy villain vehicle, a contorted Hornhead, New York beckoning from below. Gil Kane and Frank Giacoia pulled it all together, but props to the superb Marie Severin for the exciting layout. 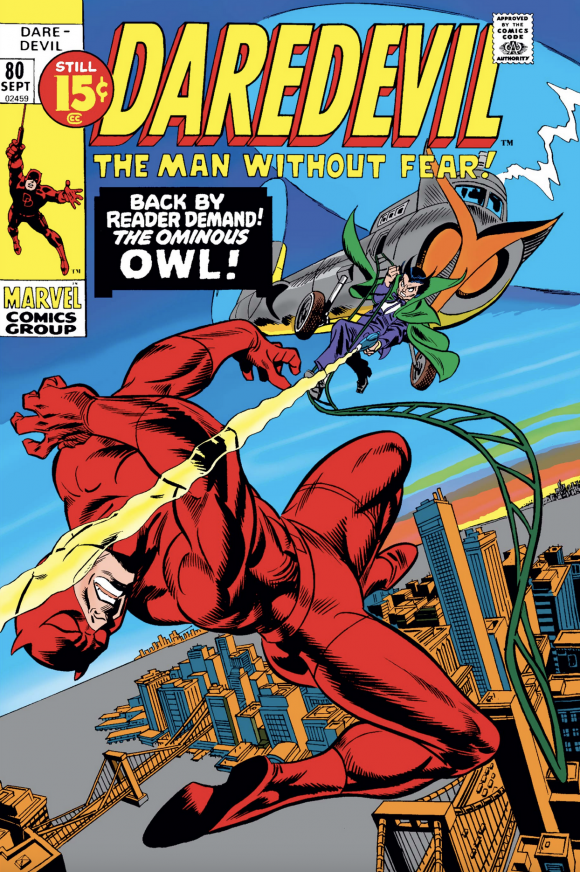 3. Archie’s Girls Betty and Veronica #190, Archie. I’m pretty sure this is the highest I’ve ever ranked an Archie comic. Not because I don’t love them — I do. It’s just back then there were so many issues to choose from that they blur together. But this one? This one is quintessential Betty and Veronica. It tells you everything you need to know about their natures in one vignette. And it’s by Dan DeCarlo, so of course it looks terrific. 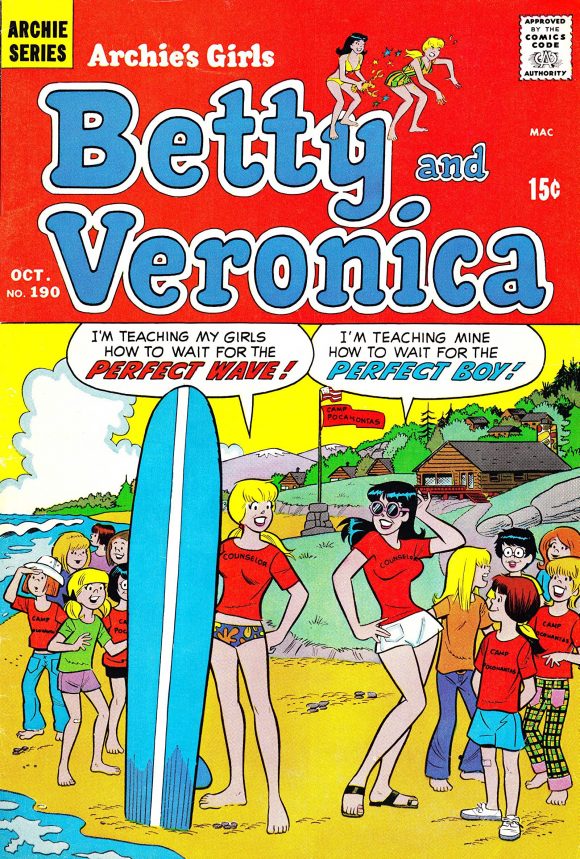 2. Haunted #1, Charlton. You’ve got a new horror series and you’ve got Steve Ditko. Is there a better way to get kids’ attention than with this fantastically phantasmic cover? No, I say no. Major bonus points because it looks like a luchador mask. Such a groovy design. 1. DC 100-Page Super Spectacular #6, DC. True story: Historian Michael Kronenberg tweeted this Adams cover the other day, pointing out that it was released 50 years ago this month. “Well, hell, that’s gonna be the No. 1 pick for BRONZE AGE BONANZA, no question,” I said to myself. But then I set about looking for a cover to beat it so I wouldn’t be so predictable. No such luck. As fun as a lot of the above covers are, none of them hold a candle to this gorgeous wraparound. It doesn’t matter that it’s a riff on All-Star Comics #16. What matters is that it’s fabulous.