The TOP 13 Classic Superhero BACK TO SCHOOL Items

Remember the end of summer when we were kids? The garden hoses were rolled up, the ice cream trucks went back into the garage… and kids braced themselves for another year of school to begin.

But it wasn’t all bad. There was the promise of going back-to-school shopping with your parents. Now, that in and of itself could be torture, but aside from trying on countless pairs of Toughskins jeans in cramped department store dressing rooms, kids of the Silver and Bronze Ages could use this fabled trip to express their inner geek in a more outward way: If they could convince Mom to buy them a school necessity festooned with their favorite crime fighters and villains, that could make the whole trip worthwhile! 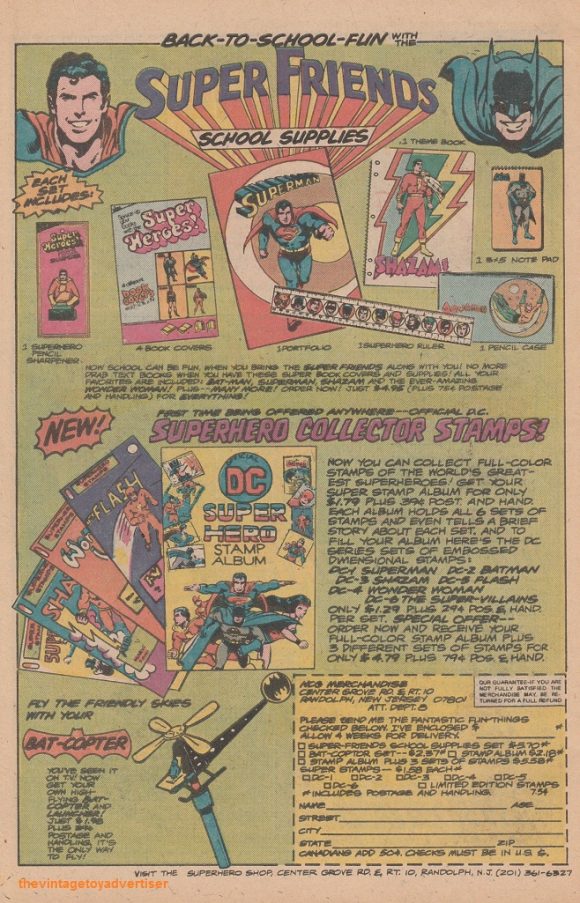 So, let’s get out that shopping list and check off THE TOP 13 CLASSIC SUPERHERO BACK TO SCHOOL ITEMS:

13. GLUE STICKS. Were you one of those kids who enjoyed eating paste? Well, you probably really loved the taste of these Super Heroes Glue Stics from Dennison. Famously advertised in half-page ads in ’70s comics, this was “label-slapping” (as Plaid Stallions maven Brian Heiler puts it) at its finest. Interestingly, there are no Batman characters offered! 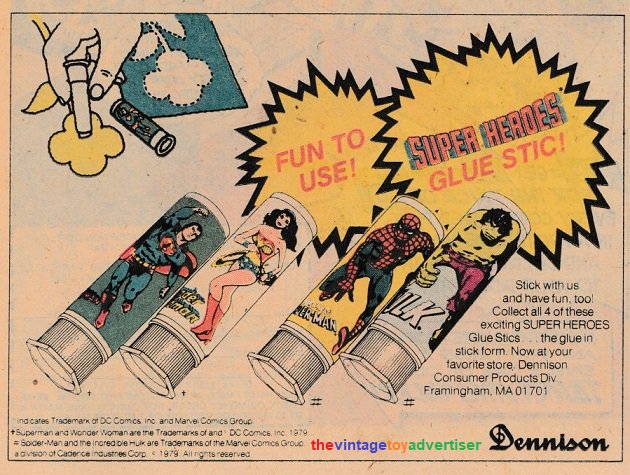 Images from a variety of sources, including thevintagetoyadvertiser, mycomicshop.com, plaidstallions.com and others

12. CRAYONS. If you weren’t a brand-centric kid, and could do without the ubiquitous Crayola, you could opt for these vintage Superman crayons from Whitman, which cranked out a great number of superhero coloring books from the ’60s through the ’80s. 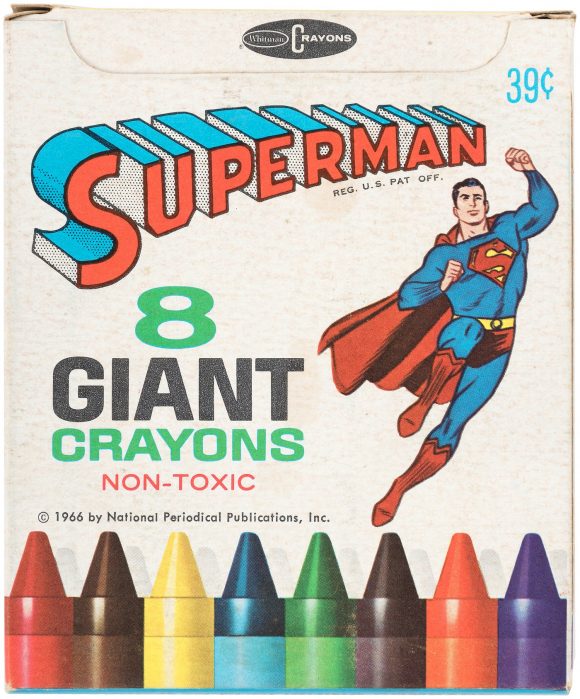 Or you could just snag a set from one of the many coloring activity sets of the era, like the Super Heroes Coloring Cloth. 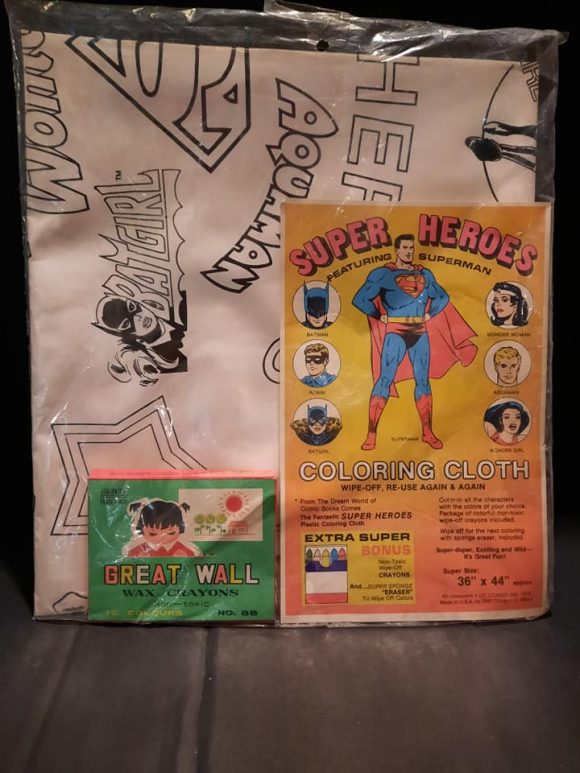 11. RULER. Were you one of those kids convinced by your teacher we’d one day be using the metric system here in the US? We’re still waiting, but in the meantime, you can size things up with a 1975 DC ruler featuring classic headshots of some of their biggest heroes (and a rare instance of merchandising for Plastic Man).

Or, if you are more mathematically inclined, you could calculate using Alco’s Bat Math Ruler, with its sliding Batman figure. I’ll be honest, I have no idea how to use this thing, but it looks cool!

10. NOTEBOOK PAPER. Notebook paper is notebook paper, right? WRONG! If you picked up a pack of Mead notebook paper emblazoned with Marvel heroes on it, you got something extra. Notice how the logos of the characters are backwards on the top sheet? That’s because that top sheet was actually an iron-on transfer! Yes, the notebook paper was the same ol’ blue-ruled paper we all know by heart, but if your Mom (or Dad) was handy with an iron, you got a sweet, sweet bonus out of the deal: a new set of threads to be proud of! I remember these packs getting brought out from the storeroom of my local Begley’s Drug for years… way up into the mid-’80s! 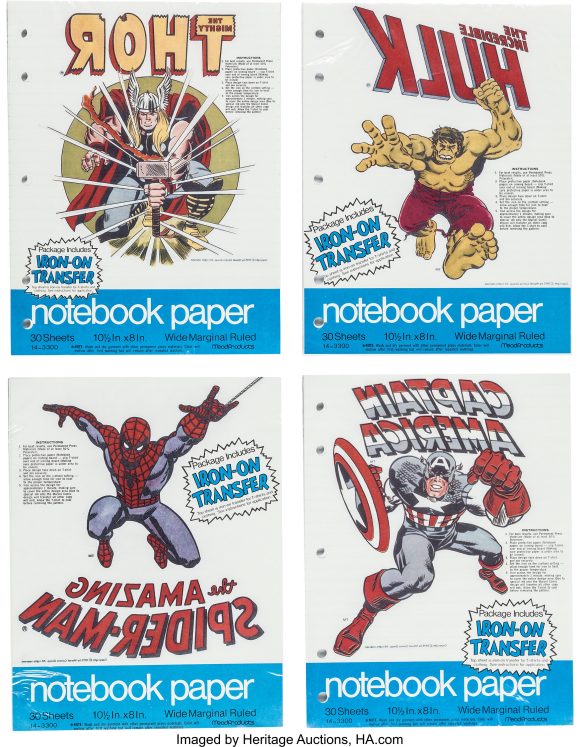 9. ERASERS/PENCIL TOPPERS. Now, unfortunately no manufacturer thought to make a tie-in to the obscure (and ridiculous) Batman villain the Eraser, but topping off your pencil could still be fun if you had one of the Super Hero Pencil Top Erasers from Henbrandt Limited. These figural erasers of Batman, Robin, Batgirl, Superman, Supergirl and Shazam (Captain Marvel) were also released as figural pencil/cake toppers, which are the versions I had as a child. The pencil toppers were released in rubbery material, as well as hard plastic. Sure, they are crude, but for me that just adds to the charm!

8. SPIRAL NOTEBOOK. Mead is still the big name in notebooks to this day, and they added an element of fun in the ’70s by releasing several styles of Marvel notebooks, featuring cover images from the comics, like Fantastic Four #158 here by Rich Buckler and Joe Sinnott, and the classic Madbomb cover of Captain America #193 by Jack Kirby and John Romita. The vertical banner down the side was featured on other Mead/Marvel releases as well. Decades before WandaVision took the world by storm, the two Avengers are featured prominently here! 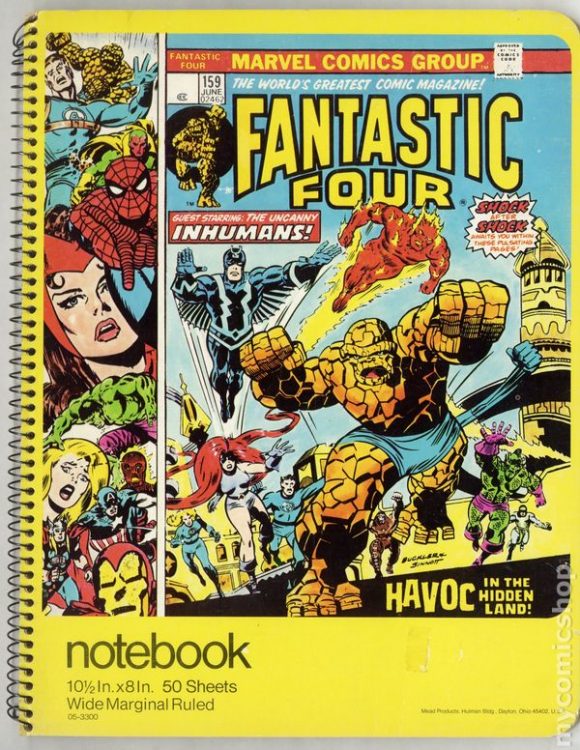 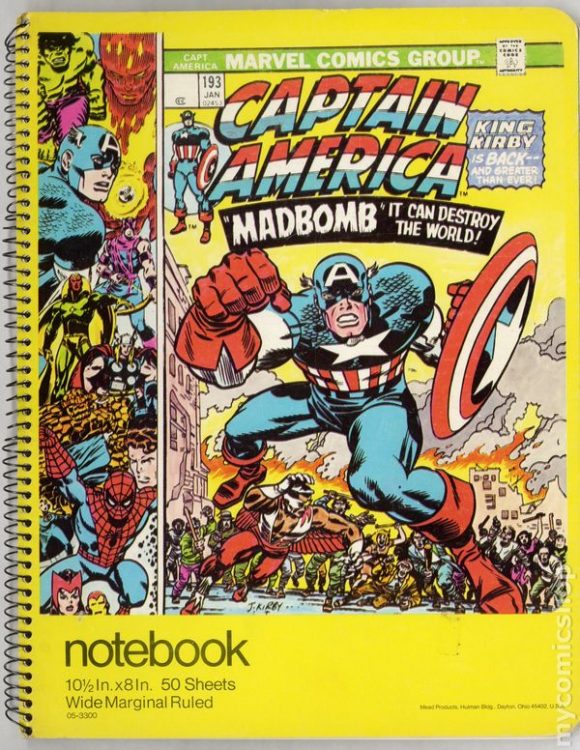 7. PENCIL CASE. You needed someplace to store those crayons and erasers, right? How about one of many vinyl pencil cases featuring DC and Marvel’s finest? I’m fond of this one featuring the Dynamic Duo and the late ’70s/early ’80s Batmobile by none other than Jose Luis Garcia-Lopez (Praised Be His Name). 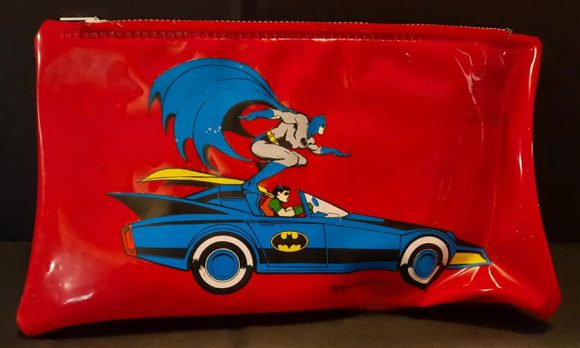 6. PENCIL SHARPENERS. Alco went to town with their DC license, providing full figure and bust-shaped pencil sharpeners. The sculpted bust versions featured the heroes holding an object, represented by a flat sticker. Superman is bending a steel girder; Wonder Woman has her magic lasso; Captain Marvel (Shazam) is somehow holding a lightning bolt; and Batman… well… Batman is holding a big red bag-shaped thingee. Bat-shield, maybe? He’s holding it on that strange Bat-Math ruler up above, too. 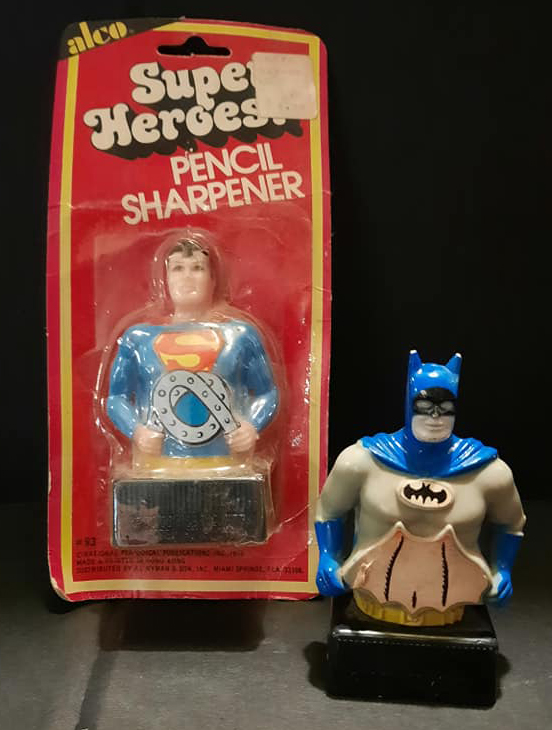 It confused me as a kid, and it confuses me now, but I’m a sucker for any figural representation of my favorite heroes. Even more confusing are the odd Super Friends-branded pencil sharpeners that are essentially non-sticky puffy stickers with a sharpener attached to the back of them. 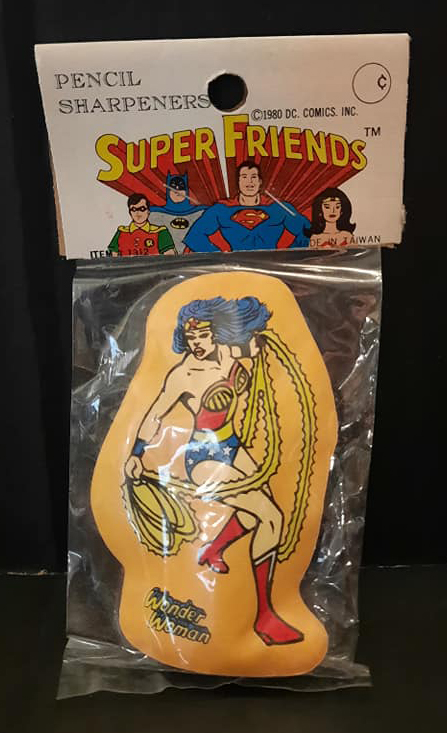 5. SCISSORS. I couldn’t compile this list without mentioning the most controversial school supply item ever to feature a superhero. This 1978 set of Wonder Woman safety scissors features the Amazing Amazon sculpted in 2D relief over the handle and blades of the scissors. Fair enough. The problem is when you open the scissors to cut with them, Diana spreads her legs in a very non-ladylike fashion. You have to wonder if anyone at Dyno Merchandise Corp was laughing as they designed this, or whether they were totally clueless. 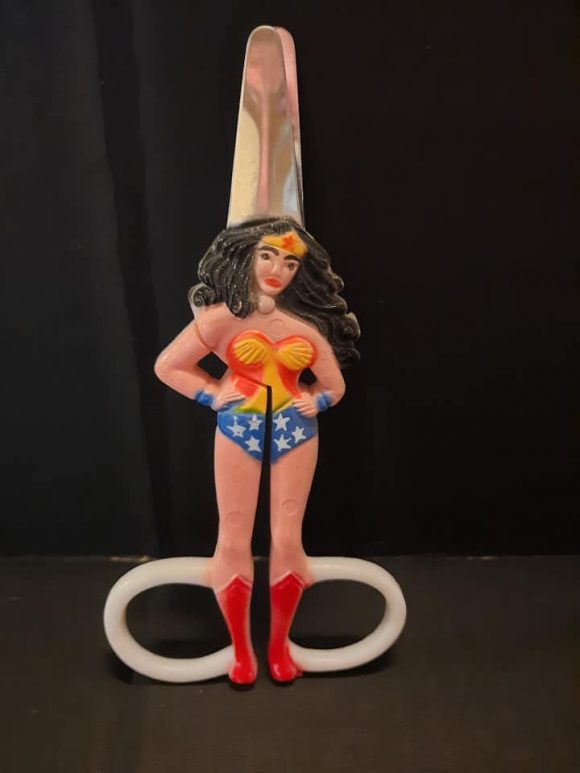 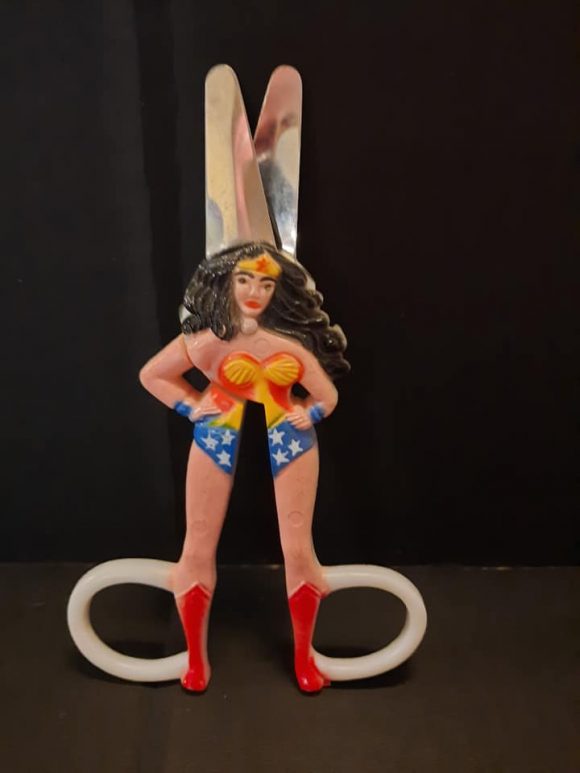 4. BOOK COVERS. Moms know putting a distinctive cover over your school textbooks was a good way to identify your copy from your classmates’, whether you were using a brown paper sack (and some custom artwork) or a premade version featuring a licensed character. Alco came to the rescue again, with a series of book covers based on not only DC’s stalwart heroes, but their dastardly archenemies. Maybe you should watch out for the kids who preferred the Joker over Batman, and Luthor over Superman! 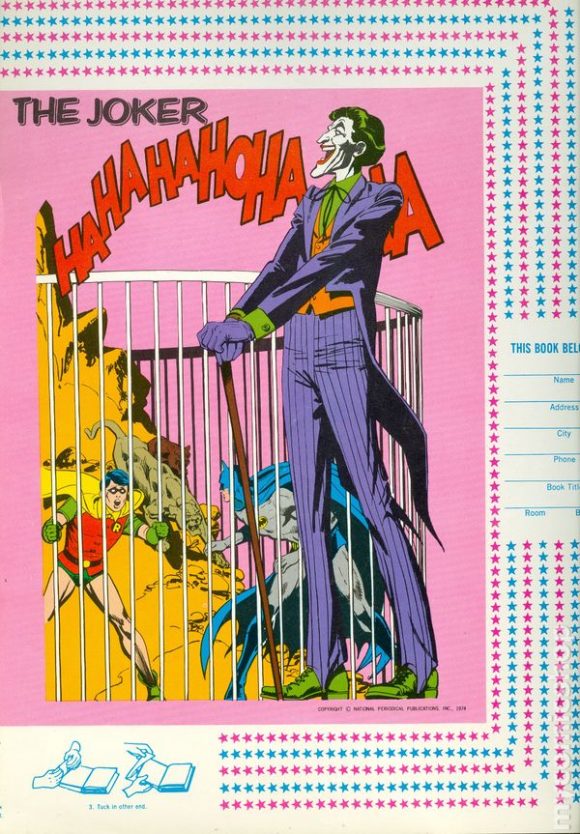 I’m one of those kids who had the supervillains! — Dan

3. BINDER. The 80s essential Trapper Keeper wasn’t the first cool school binder. This Batman model from the original Batmania of 1966 cleverly places his cape over the front and back covers, as if Batman “opens” the binder. 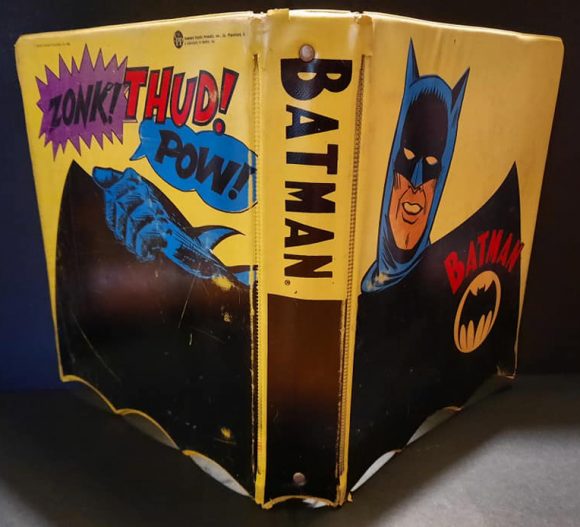 Equally awesome is the Mead Marvel three-ring binder that looks as if a comic book exploded all over your desk. I can imagine being distracted all day looking at the layers upon layers of comics panels, behind those classic figures of Captain America, Spider-Man, Hulk, etc. Detention!!! 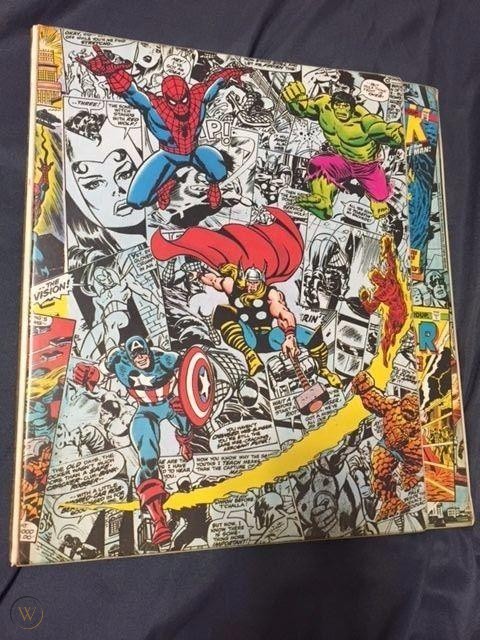 2. SATCHEL/BACKPACK. Of course, you had to have something to store all this in, right? So why not wear your superhero pride on your back, or at your side, with a backpack, book bag or satchel? Alco came through with a nice Curt Swan/Vince Colletta Superman, but then there’s also the classic Carmine Infantino/Murphy Anderson Batman swinging over Gotham with the Bat-signal blazing behind him. 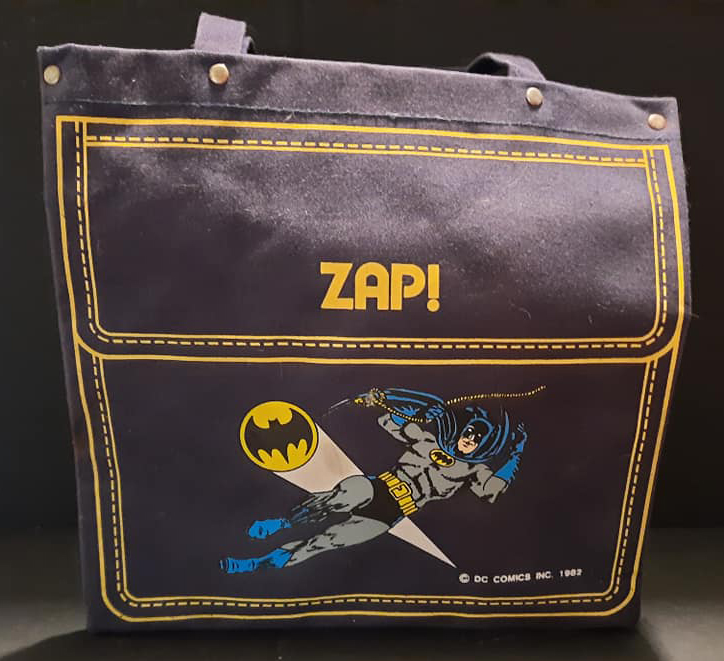 Personally, even though it’s not vintage, I love this Batman backpack from a few years back, featuring tons of classic Batman merchandise! I would love to go back in time and hand it to my younger self: 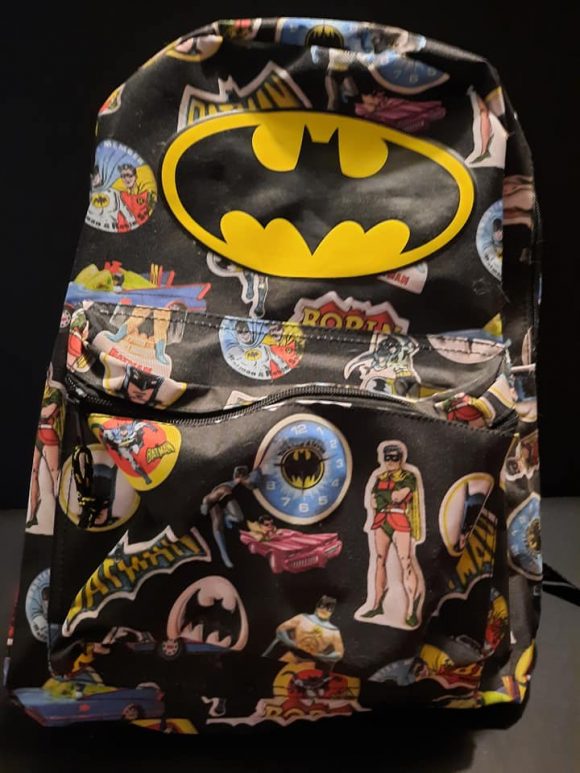 1. LUNCHBOX. But there was no greater statement of what your “brand” was than your choice of lunchbox. Picking a box with your personal heroes embossed into metal was a hard commitment to that property. And there was no shortage of comic-based lunch boxes to choose from. This sampling is just from my collection, but it shows the width and breadth of what was available. Huge movie fan? Go for the wonderfully illustrated Superman: The Movie model. Will your friends and teachers not like you when you’re hangry? Then the Hulk is the choice for you. Can’t decide? Why not get just about everyone on the Super Friends lunchbox! No matter what you choose, that bologna sandwich and Campbell’s soup inside never tasted better. 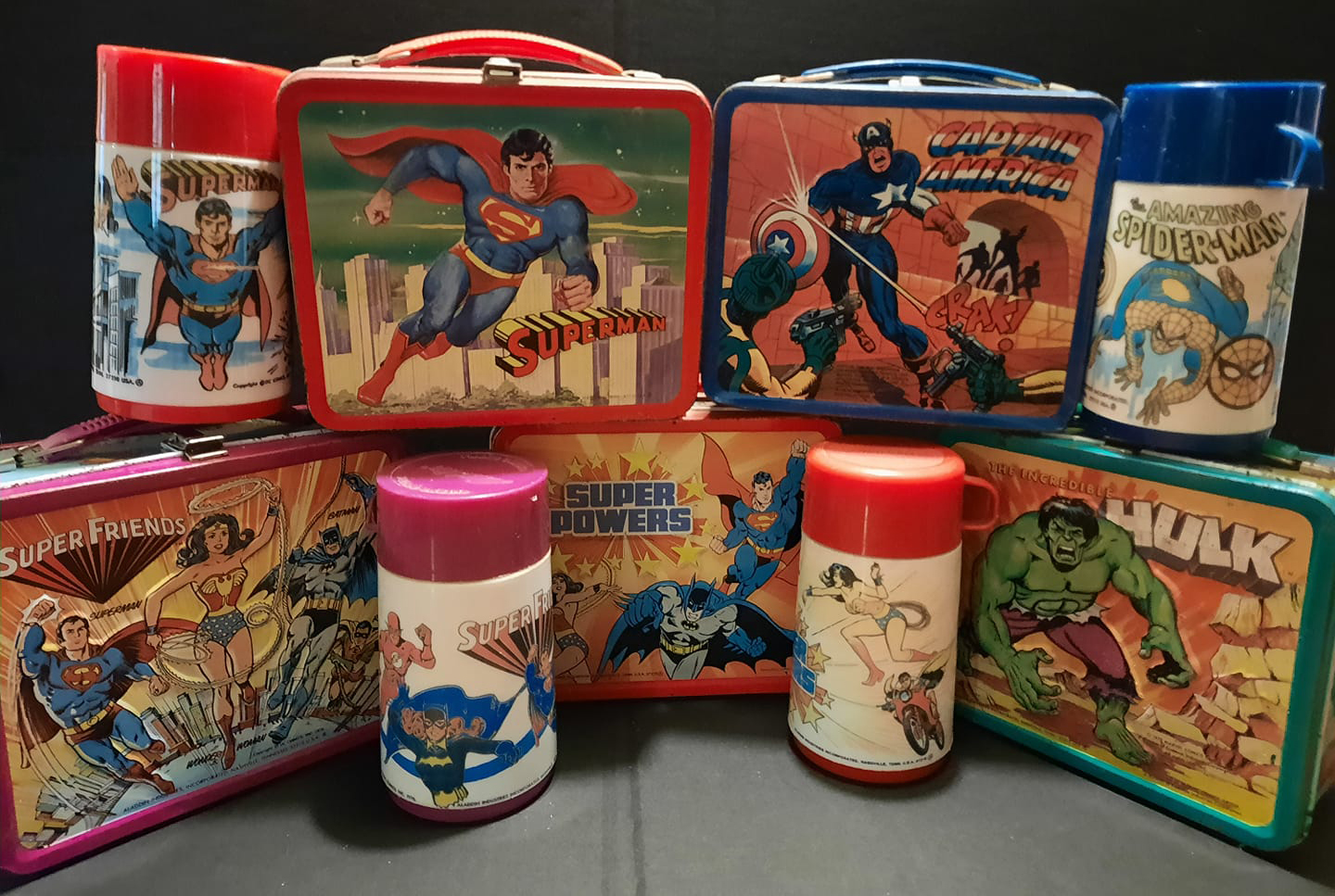 Chris Franklin co-hosts several shows on the Fire and Water Podcast Network, including Superman Movie Minute (with Rob Kelly), and Super Mates and JLUCast (with his wife Cindy).