The Simple Pleasures of the WHITMAN FRAME-TRAY PUZZLES

TOYHEM: Piecing together a sentimental look back… 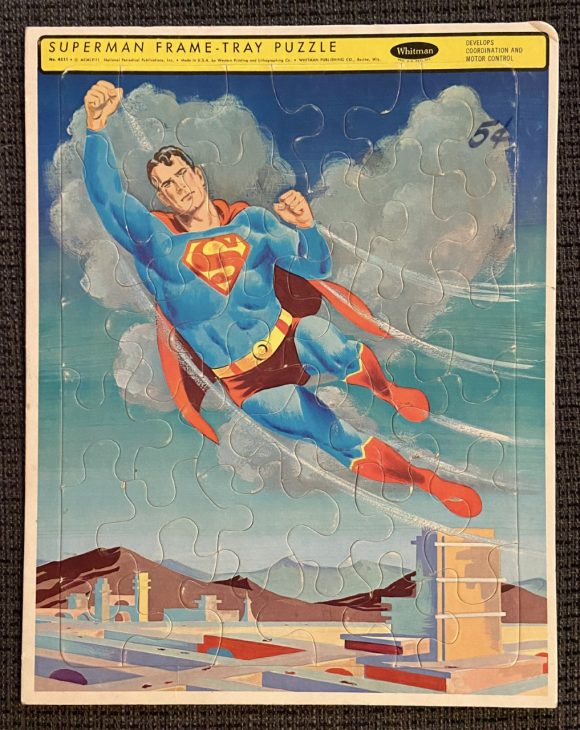 While many old-timers like to wax nostalgic for the joys and toys of their youth, it’s not overstating it to say that entertainment for children through most of the 20th century was… let’s say, simple (and often not very challenging). For me, growing up in the late 1960s and ’70s, video games were not a thing, action figures were somewhat limited, and I even had to convince myself that a Colorforms set was fun (whee, static cling!).

But one of the earliest (and simplest) playthings of my youth retains its magic for me purely due to how damn beautiful it was: the Whitman® Frame-Tray Puzzle! 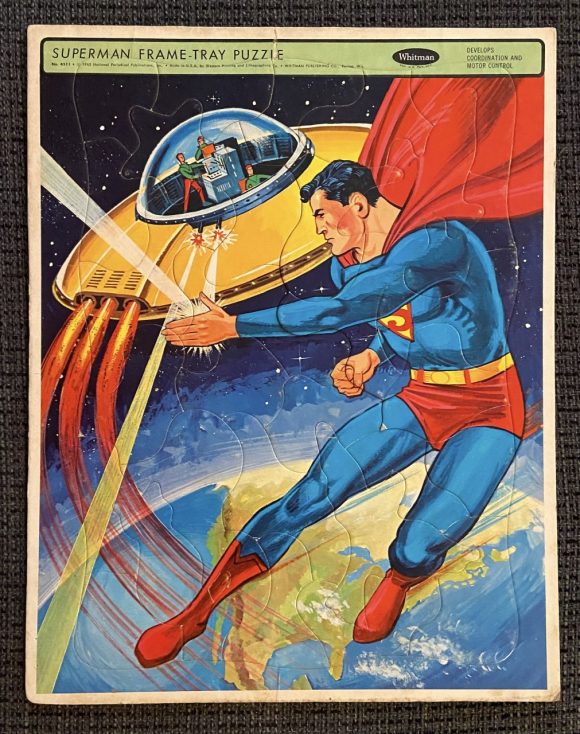 A division of Western Publishing, Whitman was well known for such time-consuming diversions as Big Little Books, coloring books, card and other games, and more. The frame tray puzzles were simple, 11.5” x 14.5,” with about 36 large pieces that fit into a cardboard border (there was even an engraved guide on the tray to help the kids put the pieces in their proper spot). The subject matter ran the gamut from cartoons, comics, toys, movies, and TV shows to nature, holidays and history. Being a superhero fan from an early age, I gravitated toward the puzzles depicting my favorite, Superman.

In fact, I think my first Whitman FTP (not to be confused with NFTs, which were not a thing in the ‘60s… just like they’re not a thing now!) was one I still own: Superboy rescuing a yellow pup from a marauding brown bear. My copy is worn, with one piece missing, another broken, and the underside of the puzzle scribbled over with what we used to call, “magic markers.” 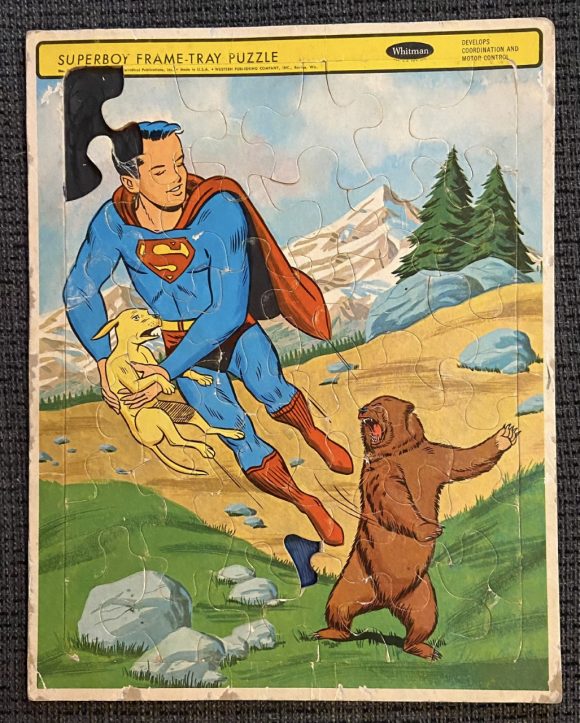 I also still have the absolutely amazing 1967 Lone Ranger puzzle (based on the then-current animated series from Format Films), not an action-packed scene, but rather the masked rider of the plains and his “faithful Indian companion, Tonto” (sic) having coffee and cooking bacon over a campfire at sunrise, while Silver waits in the background (no idea where Scout was). I love to imagine the pitch for this particular item: “Okay, we got the Lone Ranger license, we’re gonna do a puzzle, what do the kids wanna see? I know! Cooking breakfast!” But to me, it’s a thing of pure beauty, and is currently framed and hanging in my bedroom. 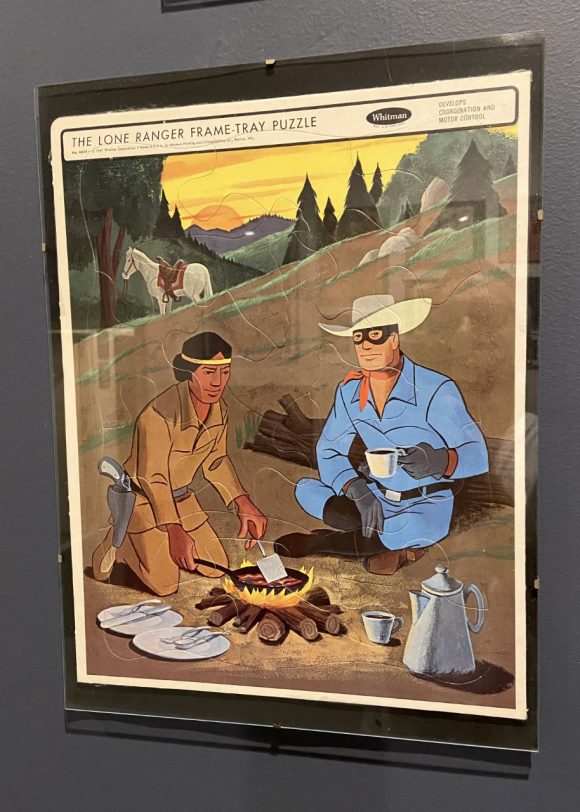 The sad thing about these beautiful puzzles is that the artists are not only uncredited, but many of their names have been lost to history. These were mostly Western Publishing workhorses who had no idea that entire generations of people would grow up to value this stuff as way more than just disposable kiddie junk, and not just through the rose-colored lenses of nostalgia.

I mean, look at these things! Superman saving the Capitol from the mad scientist and deflecting a destructive beam from a flying saucer (not aimed at Earth, but still!) DESERVE to be under glass, am I right? 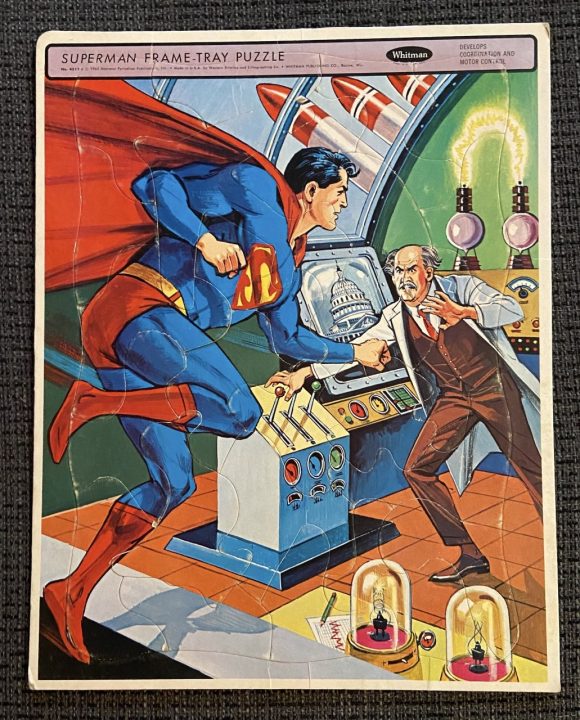 One of my favorites is the 1966 box set of four smaller (8” x 10”) Superman puzzles, all paintings, depicting Supes flying Lois Lane over Metropolis, saving a dog (again!) from a speeding motorist, smashing a nefarious robot, and struggling with a vicious lion. Phew! 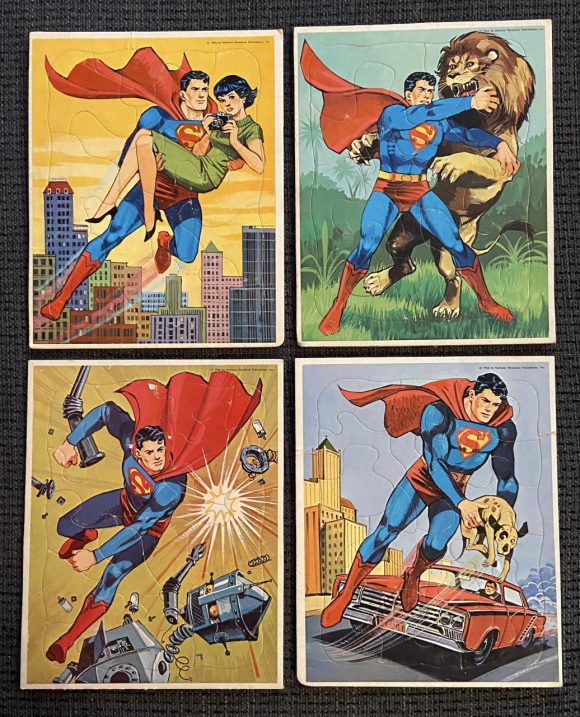 As an adult collector, I’ve slowly been adding more of the Whitman puzzles that came out a little too early for me to bug my parents for when they were new. The Batman puzzles are for the most part not as good as the Superman ones (none of them were painted), but Eclipso is in one of them! 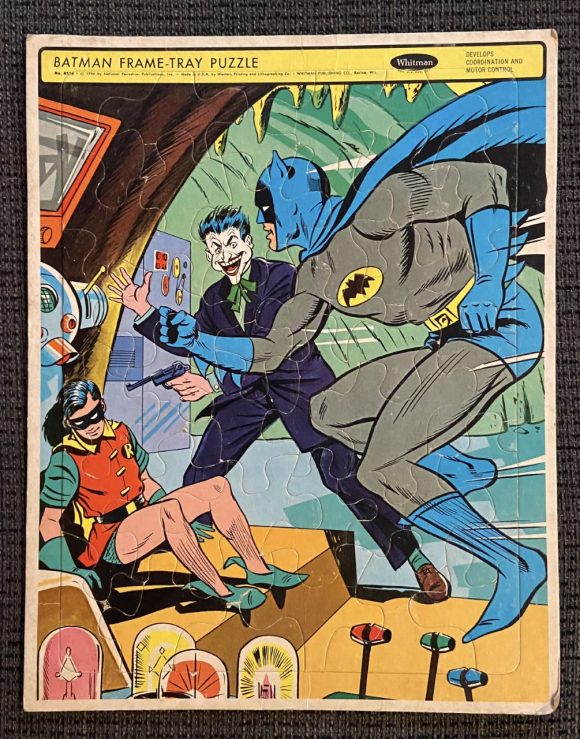 There are lots of holes in my Whitman Frame-Tray want list. I’ve recently acquired a few Christmas puzzles, but I’m still missing one or two Superman puzzles, and I’ve got my eyes on a Major Matt Mason puzzle. But my Holy Grail is the four-puzzle Space Ghost box set. 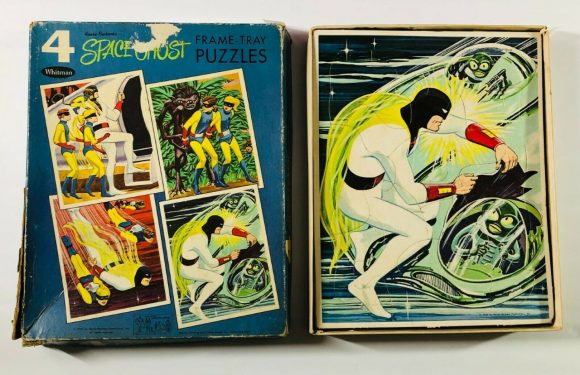 Like I said, not the most challenging toys (although the banner at the top always promised, “Develops coordination and motor control”), but sometimes, simpler is not only better, but a thing of beauty in and of itself. 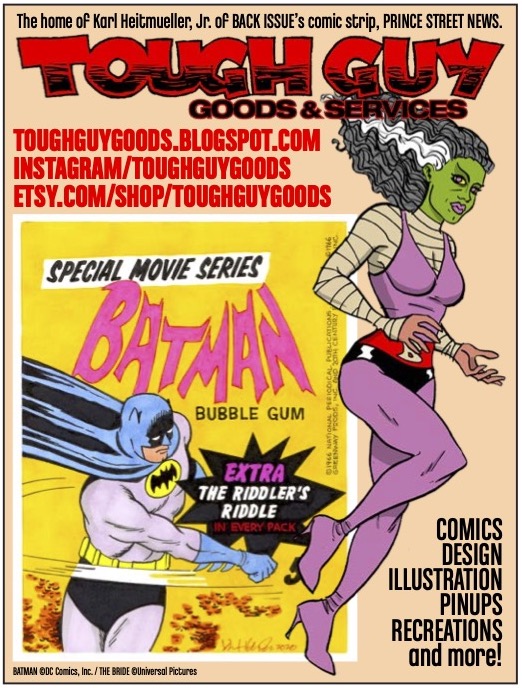