The Mystery of the MEGO SUPERVATOR

Home » ACTION FIGURES & MERCH » The Mystery of the MEGO SUPERVATOR

TOYHEM! Scott Tipton explores the most inscrutable of ’70s toys…

UPDATED 12/20/22: With the 50th anniversary of Mego’s World’s Greatest Super-Heroes line upon us, it’s the perfect time to re-present this 2019 piece by contributor-at-large Scott Tipton. Right on! — Dan

Scott Tipton should be very familiar to you: He’s my partner in our weekly HOT PICKS! column and he’s one of IDW’s go-to Star Trek writers. In fact, his latest, The Q Conflict — co-written by his brother David, with primary art by David Messina and a wonderful cover by George Caltsoudas — is available now. It features all the Trek captains and makes for a great last-minute Christmas gift. (Click here!) 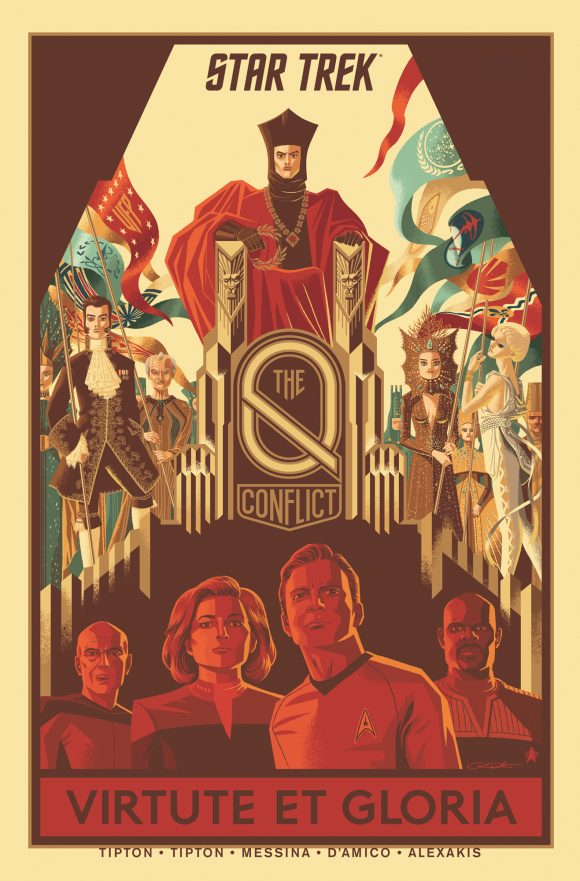 It was Christmas 1975. Four-year-old Li’l Scott had just discovered superheroes that year thanks to the Adam West Batman TV series showing up in reruns, and my parents, bless ’em, were feeding my newfound superhero frenzy that Christmas with comic books, toys, books and action figures — not the least of which were my first two Mego World’s Greatest Super-Heroes, Batman and Spider-Man.

But also in that pile of presents beneath the tree was maybe the most mystifying offering in the Mego product catalog: The Supervator. 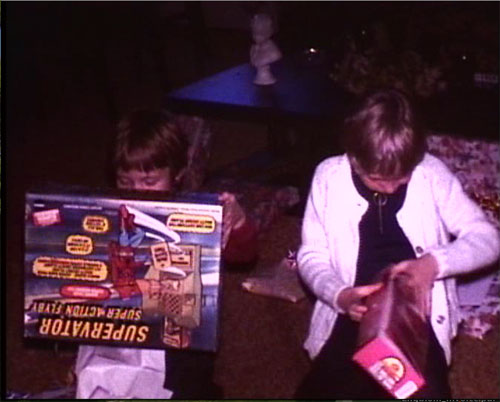 What was the Supervator? Well, I didn’t know then, and honestly, I don’t really know now. Was it a playset for the Mego figures? Sort of. Was it a game of skill? Kinda. Was it my favorite toy for years and years? Absolutely. 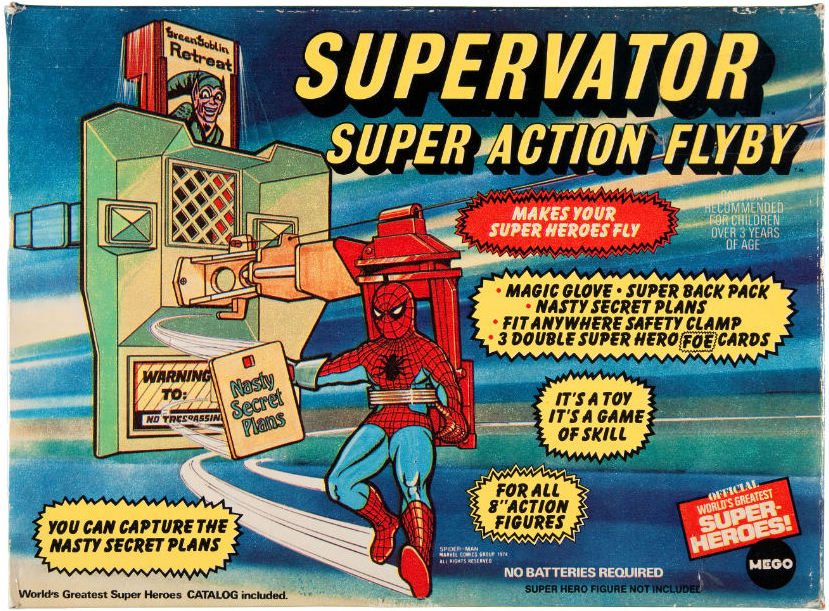 The Supervator consisted of a bright green assembly that resembled nothing so much as a baseball scoreboard at a small-time minor-league ballpark. Along with it came a comically large clamp and bolt to attach the Supervator to a table or shelf around the house, a length of plastic wire with a grip handle at the end, and a bizarre-looking backpack/harness/sky hook that your Mego figure would wear in a most cumbersome fashion, along with a matching mitten covered with Velcro on the palm. 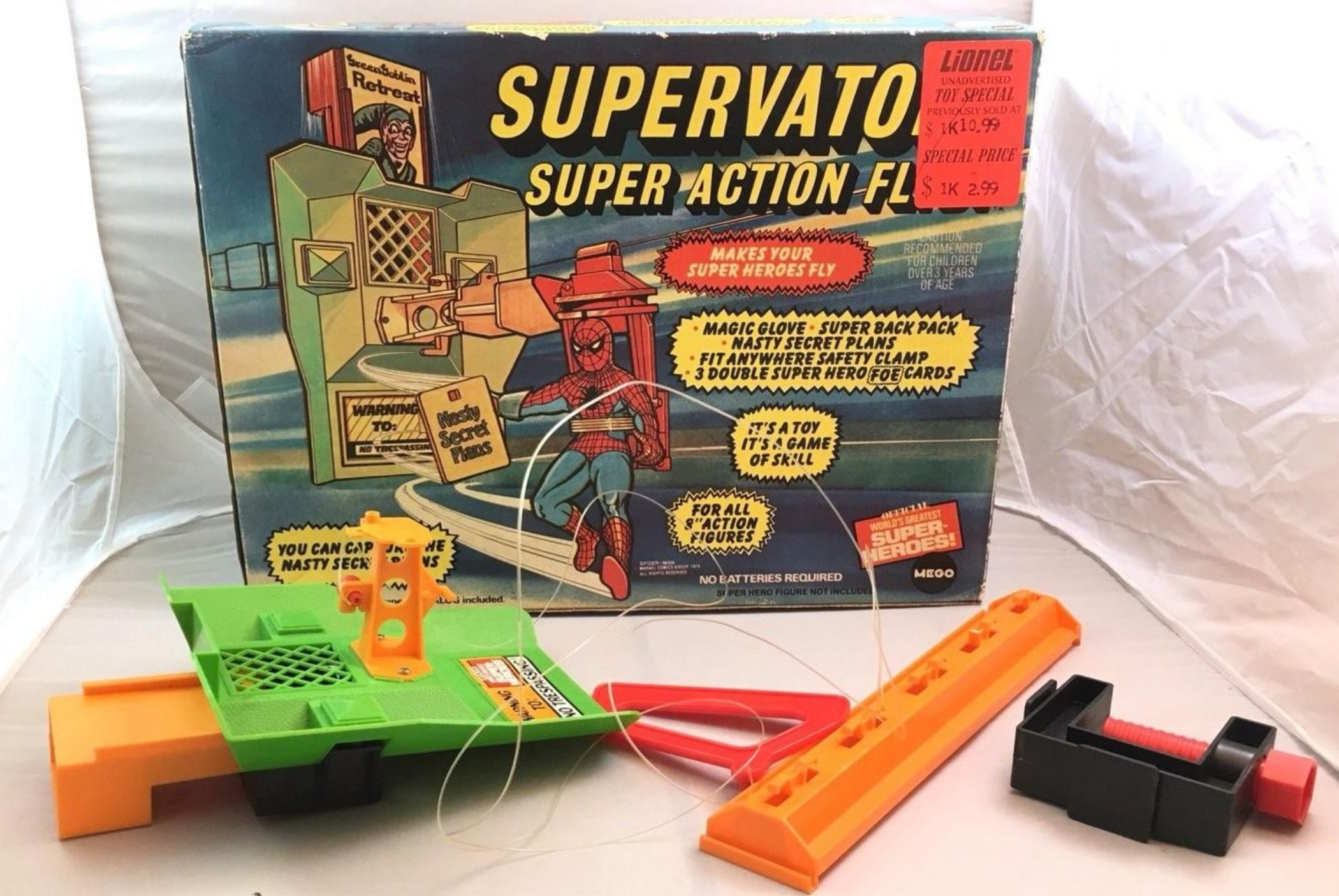 Why? What was it all for?

Here’s how it would work: Once securely clamped to a table or shelf (and Lord knows I tested out every available spot in the house till I found just the right coffee table), you would load a spring-loaded
villain card into the slot up top, and dangle some Villain Secret Plans (also helpfully affixed with Velcro) off a hook at the toy’s lower front. Thus prepared, you would then belt up your Spidey figure into his enormous orange backpack, and extend his right arm, making sure to cover it with the mitten. 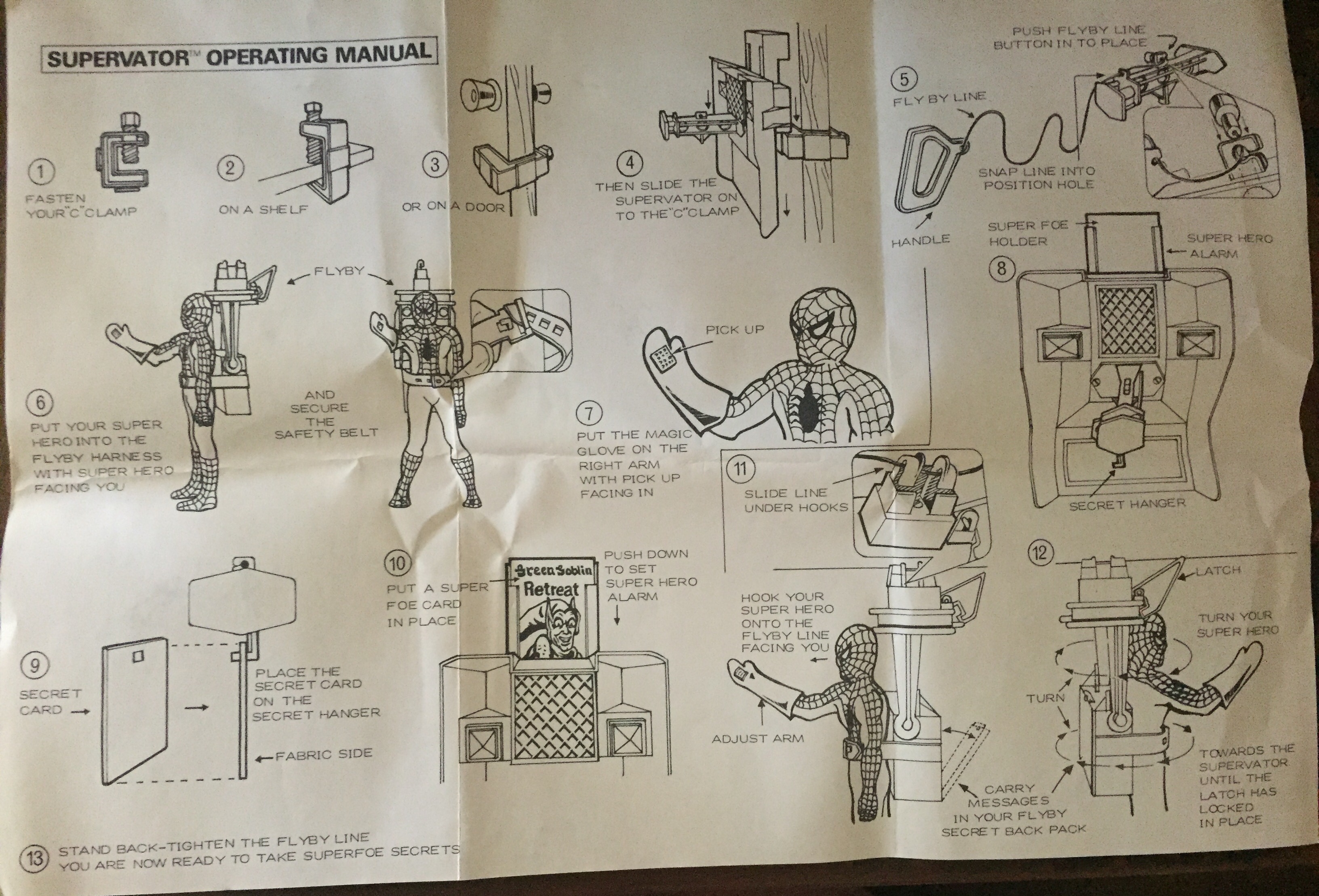 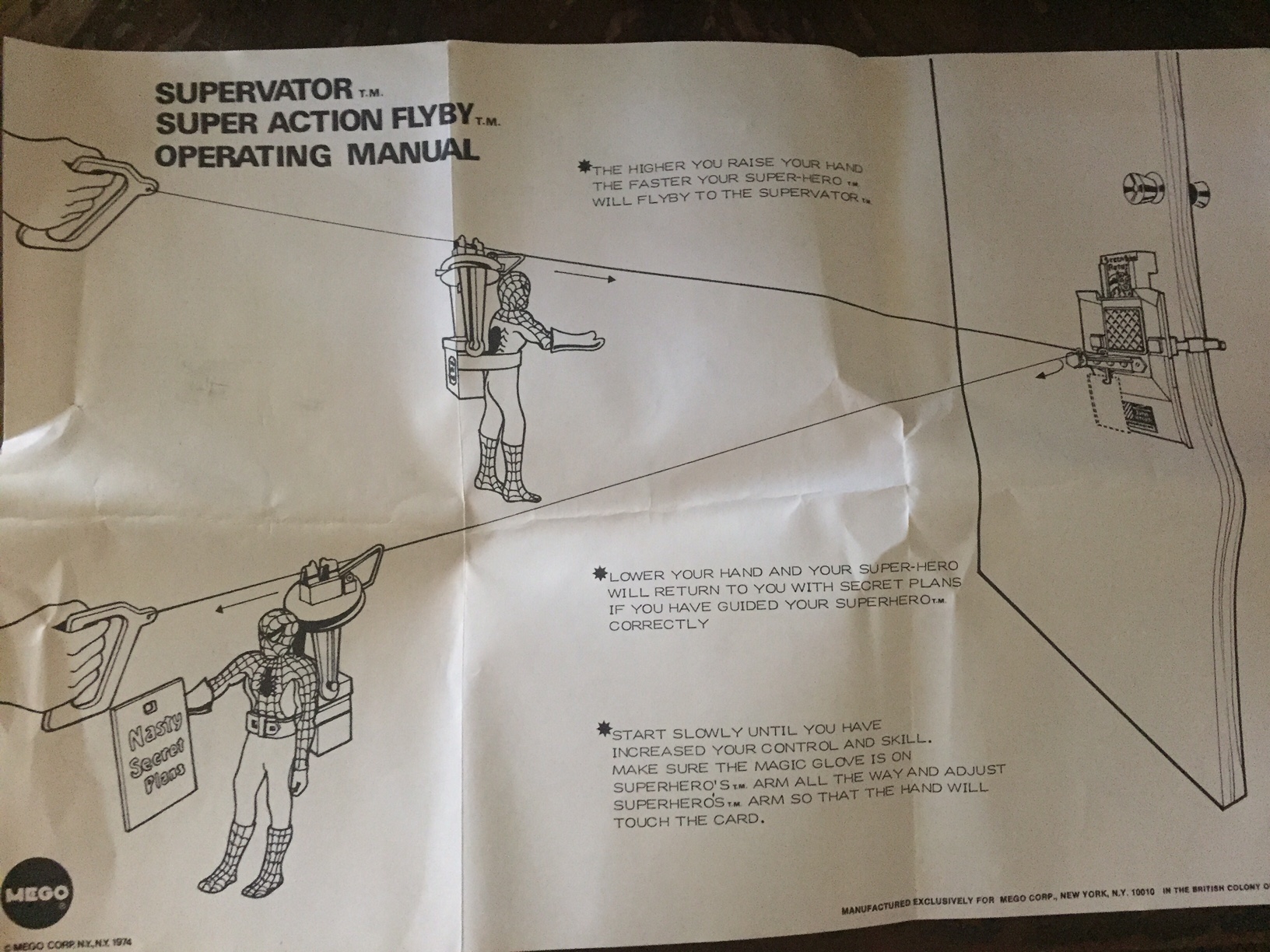 Then you would back up from the Supervator about six feet, with the plastic line attached to both the toy and your handgrip. When the line was taut, you would hook your backpacked Spidey on the line, then raise your hand, elevating Spidey and making him zoom toward the Supervator. When he smacked into the Supervator’s central plate, another spring would be triggered in his backpack, causing the character to spin 180 degrees, snatching up the Velcroed plans in the turn, and freeing him to slide back down the line as you lowered your hand. 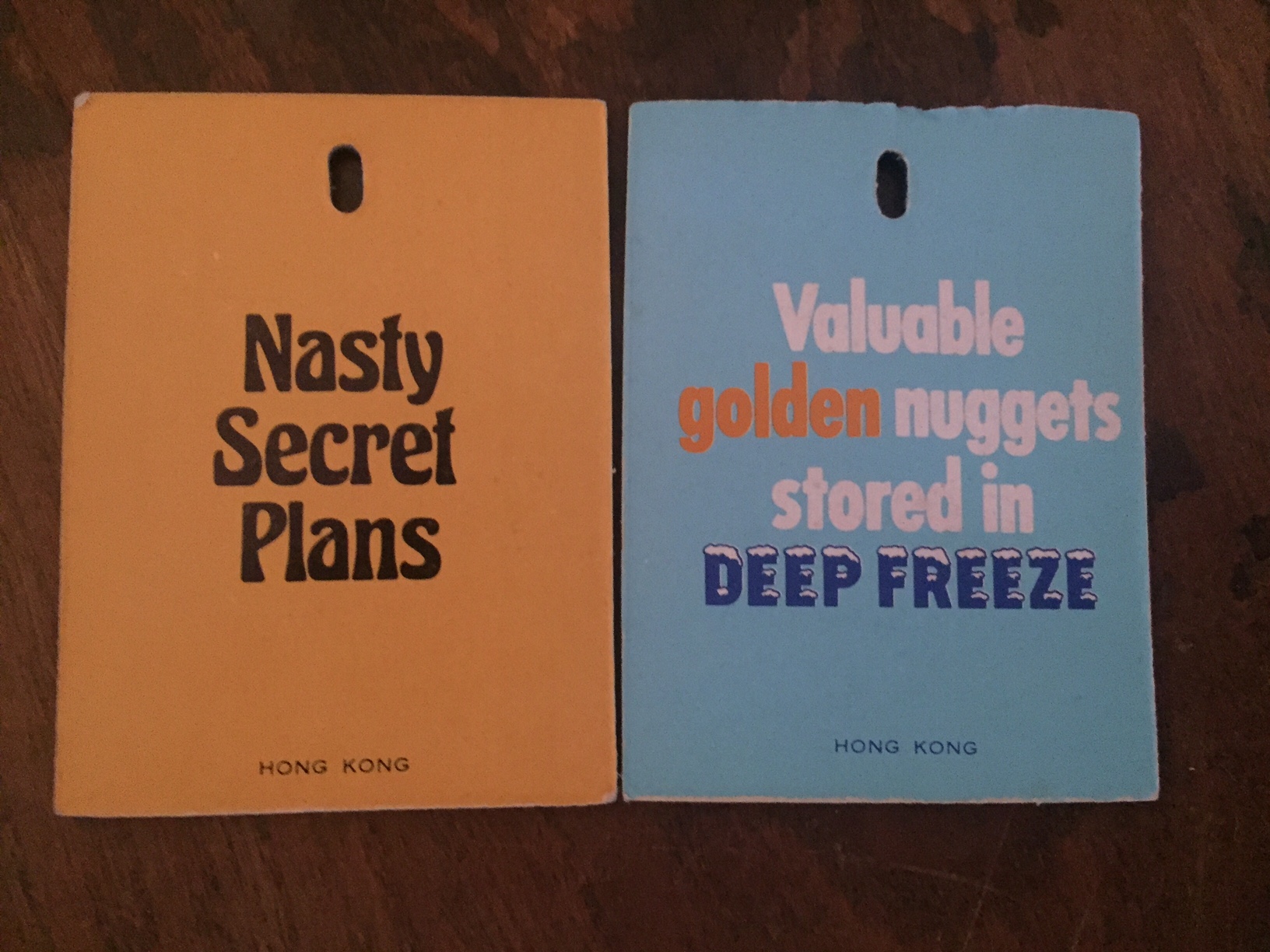 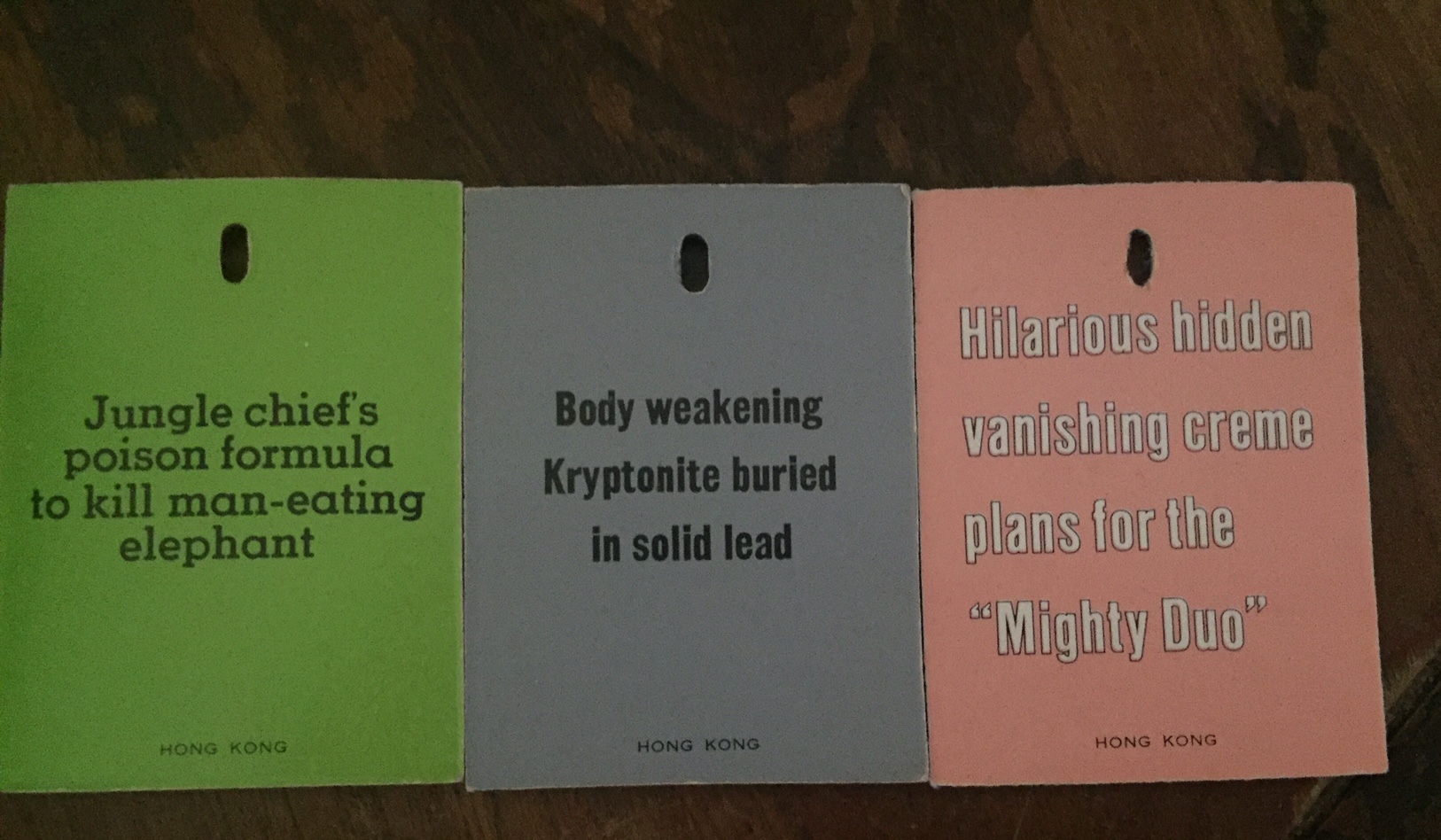 Meanwhile the villain card would pop up at the top, with Joker or the Green Goblin glaring as Spidey slid to a safe getaway. Even stranger, since Mego had licensed Tarzan as one of their World’s Greatest Super-Heroes, they had to invent a super-villain for the Lord of the Jungle to face on the Supervator, and so behold the only appearance ever of “Jungle Chief”: 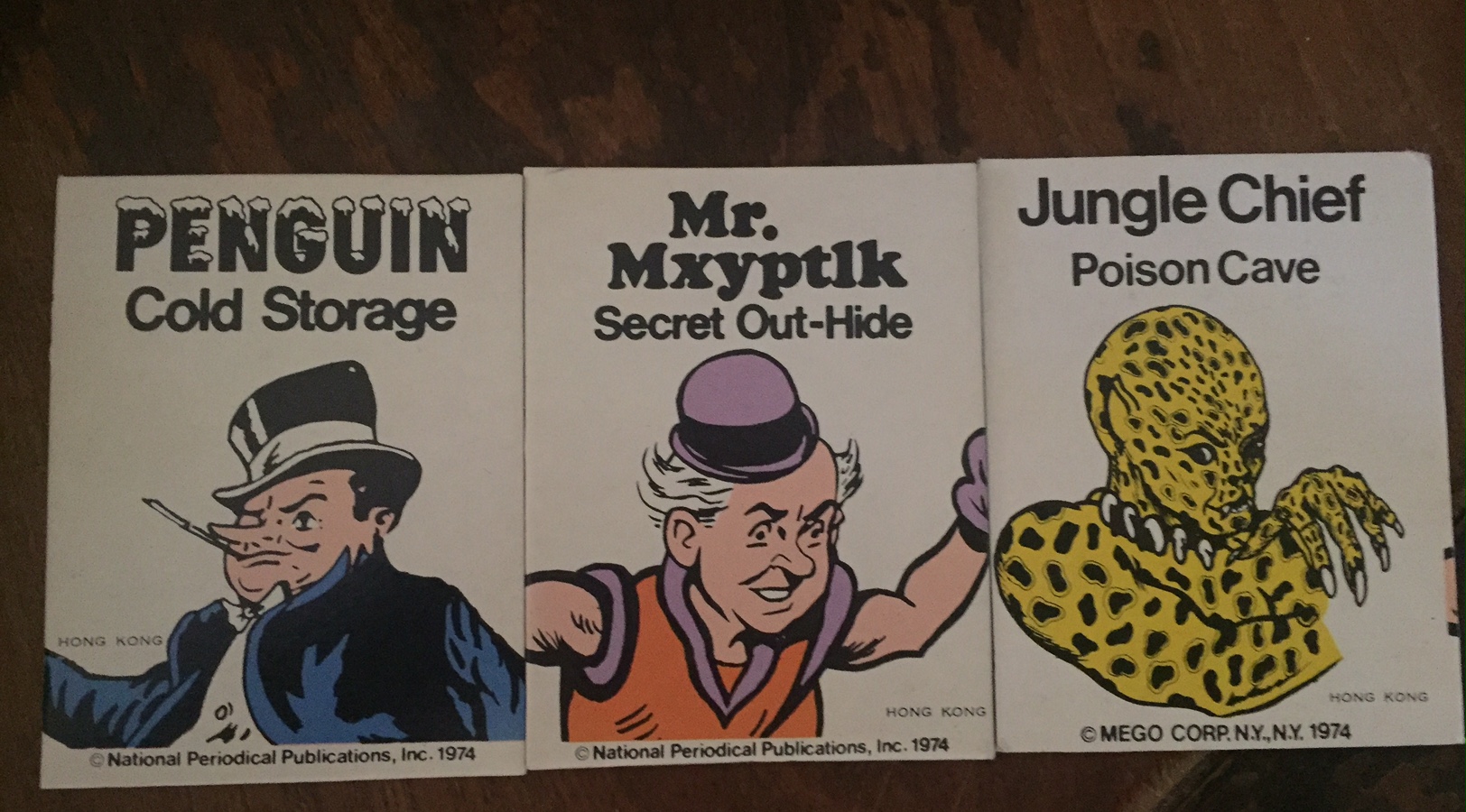 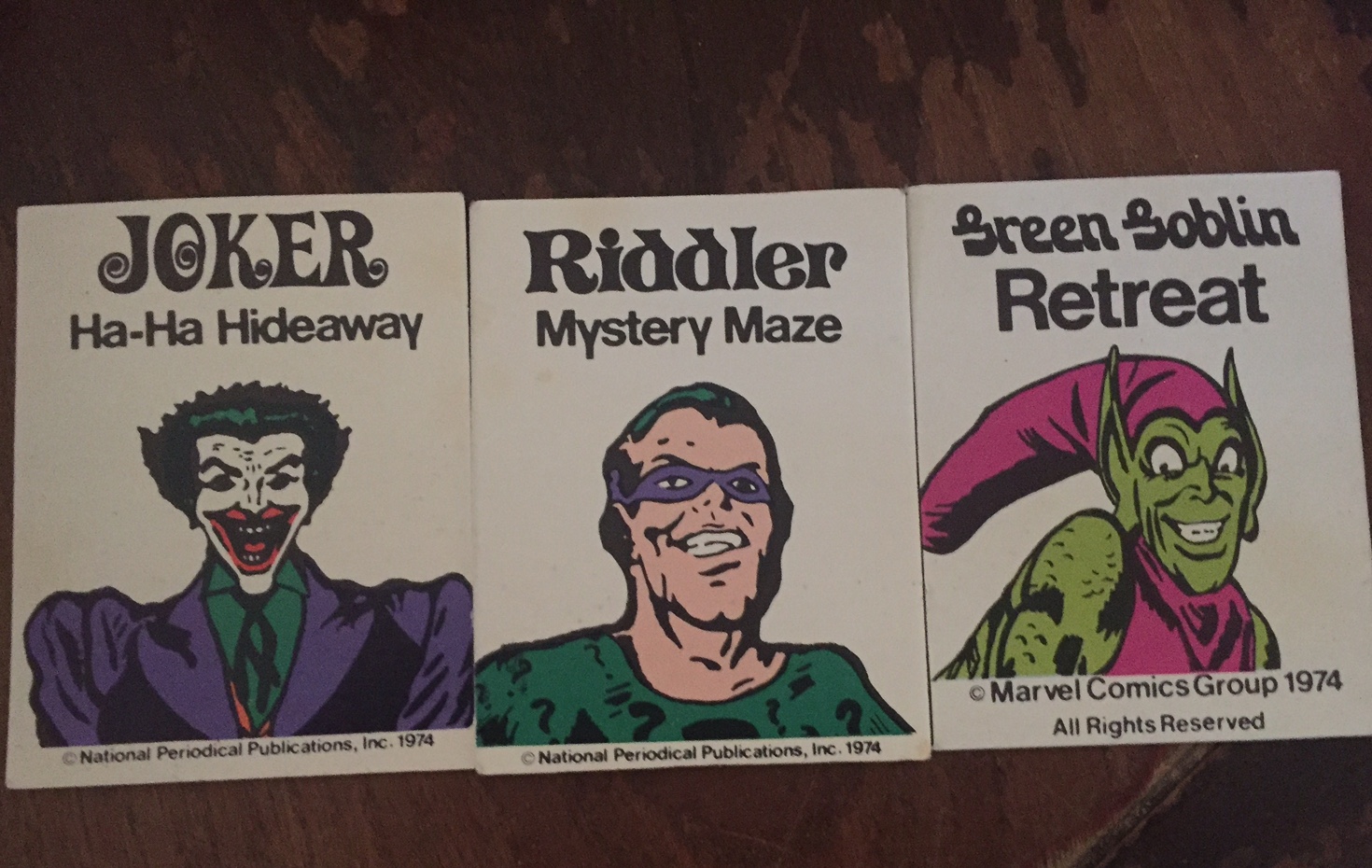 That was it. That was the entire realm of possibility. Zip down, zip back. So why did I love this goofy thing?

Sure, I liked the accessory aspect — it was a kick strapping Spidey into this bizarre scaffold backpack and oversized glove like he was a lineman for the local utility company. But mostly it was just fun. Mindless, kinetic, hard-plastic fun. And I don’t know about the rest of you, but for me, that’s hard to come by these days. 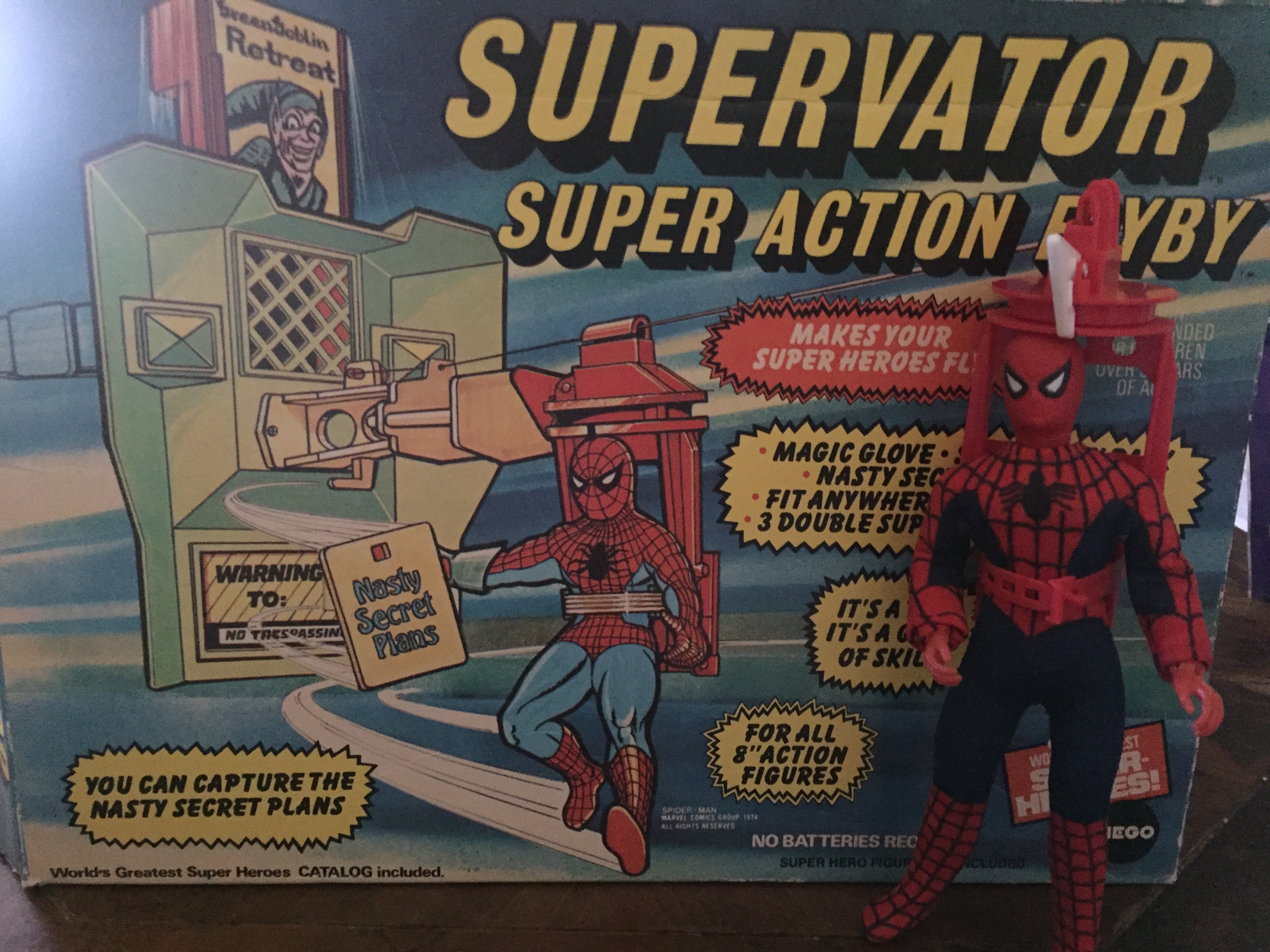 NOTE from Dan: What Scott didn’t tell you is that he was so amped up to write this column that he went and bought himself a Supervator on eBay. Nice!