THE MARVEL SUPER HEROES: The Origin of the ’60s Cartoon Series

Getting Captain America to throw his mighty shield… 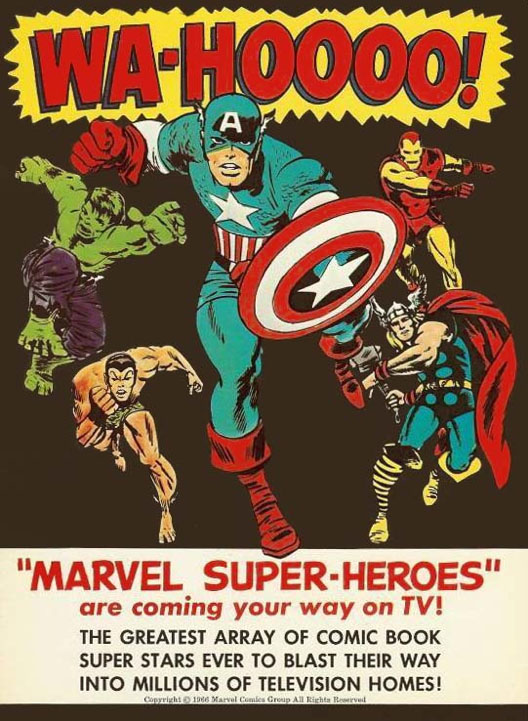 Hey, folks, Michael Eury’s RetroFan #16 is out Aug. 11 and this ish is a corker, with big stories on Logan’s Run, the ’60s Marvel Super Heroes cartoon series and subsequent Spidey network show, as well as H.R. Pufnstuf and other old-school faves. 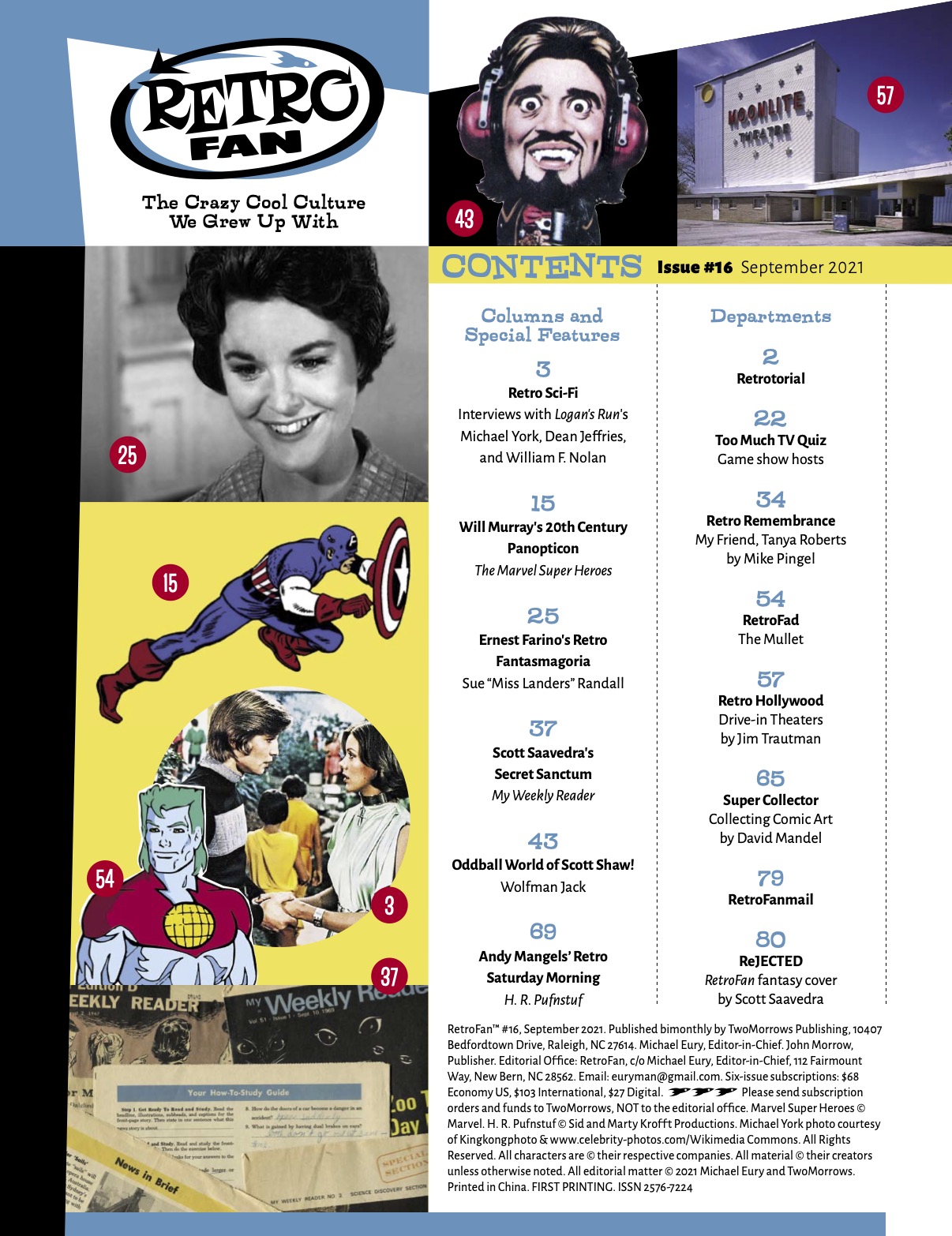 I’m a huge fan of Logan’s Run; it was my Star Wars until Star Wars came out the following year. But for our usual EXCLUSIVE EXCERPT, I’m going with the Marvel Super Heroes story by Will Murray.

Murray does an excellent job of providing the background on Marvel Super Heroes, its execution and ultimate downfall.

Here, we bring you a look at how it all got started – but there’s so much more in the article that this just scratches the surface. I highly recommend getting yourself the complete mag. It’ll be available at comics shops and magazine sellers but you can also order it directly from publisher TwoMorrows. (Click here.)

Imagine my thrill when Stan Lee in 1966 announced that some of Marvel’s top super-heroes were coming to TV. Grantray-Lawrence Animation acquired the rights to Captain America, Iron Man, Prince Namor the Sub-Mariner, the Mighty Thor, and the Incredible Hulk for release as a syndicated anthology show, The Marvel Super Heroes. I could hardly wait.

“I was associated with a fascinating group of amateurs in Hollywood,” he said. “Some of the best ones were Ray Patterson and Grant Simmons, and we were doing animation work; programs and commercials as well. And the comic books intrigued me. I’m not a comic book reader per se, but the artwork to me was absolutely alluring. We decided to see if we could animate a book.

“Now, if you recall, at that particular period, the business was in a slump, and the Goodmans, papa and son [Marvel publisher Martin Goodman and son Chip], were fighting to stay alive. And fortuitously, I was able to make contact with them.”

Not so fast. Producer-distributor Steve Krantz of Krantz Films credited his young sons, Nicholas and Anthony, whose Marvel collection was overwhelming the Krantz home.

“In desperation,” Krantz explained, “I picked one of the comics up and started to read it, and I realized that no one on television at that time was doing any of the comic books. My sons picked out a number of their favorite characters for me, and I went out and got the rights to them, and that’s how Super Heroes began.” 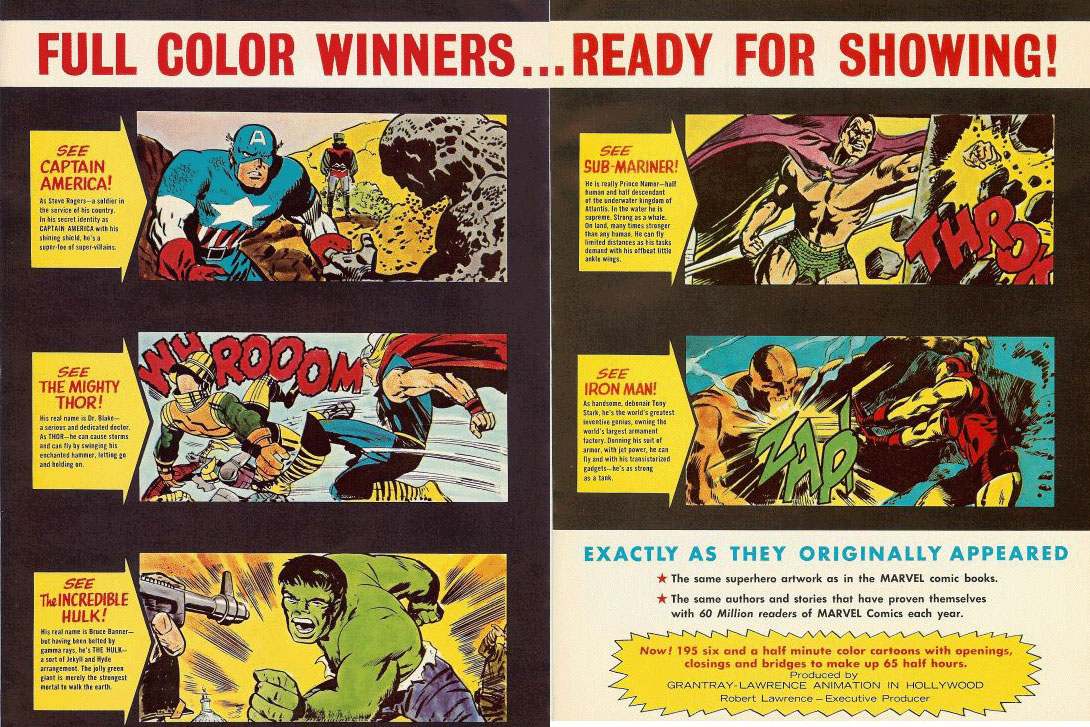 Stan Lee settled the question when he said, “As far as I know, the deal was made between Martin Goodman and Grantray- Lawrence. I’m sure it was Bob who decided which characters to use.”

“Originally, my concept was to use the original art and try to utilize that as the basis for the production,” recalled Lawrence, “but it proved to be too costly and too complicated. We learned that Disney had acquired a machine where you can copy cels, and if we’d all been smart, we would’ve bought stock in that company — that was the beginning of Xerox. They had it locked up in a room, in Disney’s facility.

“But Hollywood is like a sieve — so we got one. And we locked ours up in a room. And it made all the difference in the world. It was really a lifesaver.”

Here, Lawrence and Krantz were on the same page.

“It was set up as a ‘living comic book,’” Krantz said at the time. “We used the original comic book art, and animated only limited portions of it. It worked quite well, because you get very dramatic poses in comic books. Nothing is static. And we use the Pow! and Smash! words right on the screen.”

Batmania was in full swing, so the parties were hoping to cash in on the Sixties super-hero craze. Having the foundation of Jack Kirby’s dynamic artwork, as well as those of Steve Ditko, Bill Everett, Don Heck, Gene Colan and others to work from, gave the team confidence that the episodes would work for television.

“One of the secrets of Marvel’s success is its ability to draw action right into its panels,” Lawrence observed. “Marvel’s art is like no other penciling in comics, because its artists and production people understand the principle of arrested motion. Iron Man doesn’t just stand there. He tenses, or relaxes, or jumps, or recoils. The characters don’t actually move, and yet their actions seem to flow, catching the reader up in a current of activity. Since we wanted to retain this flow for our film, we decided to let their artists carry the ball— and the viewer—just as they do their own readers.”

RetroFan #16 is due Aug. 11. It will be available at comics shops and magazine sellers but you can also order it directly from publisher TwoMorrows. (Click here.)

— BEHOLD, TRUE BELIEVERS! Your Guide to the MARVEL Cartoons of the ’60s! Click here.