TOYHEM! Finally — a place for Mego-style Spider-Man and his arch-nemesis to throw down…

Whether you’re a bigger fan of Batman or Spider-Man, one thing’s clear to us Mego kids of the ’70s: the Caped Crusader had it all over the wall-crawler in the 8-inch scale.

Batman had two playsets, five vehicles, three heroes, two secret identity figures and four villains. Spider-Man had one playset (if you count the Supervator, which was made for a variety of heroes), one vehicle (which was kinda cool but hardly essential, one secret identity fig and two villains.

Well, customizing king Anthony Durso of The Toyroom is improving Spidey’s side of things with the brand-new Green Goblin’s Lair playset — a place where the web-slinger can finally do proper battle with Norman Osborn’s demented alter ego: 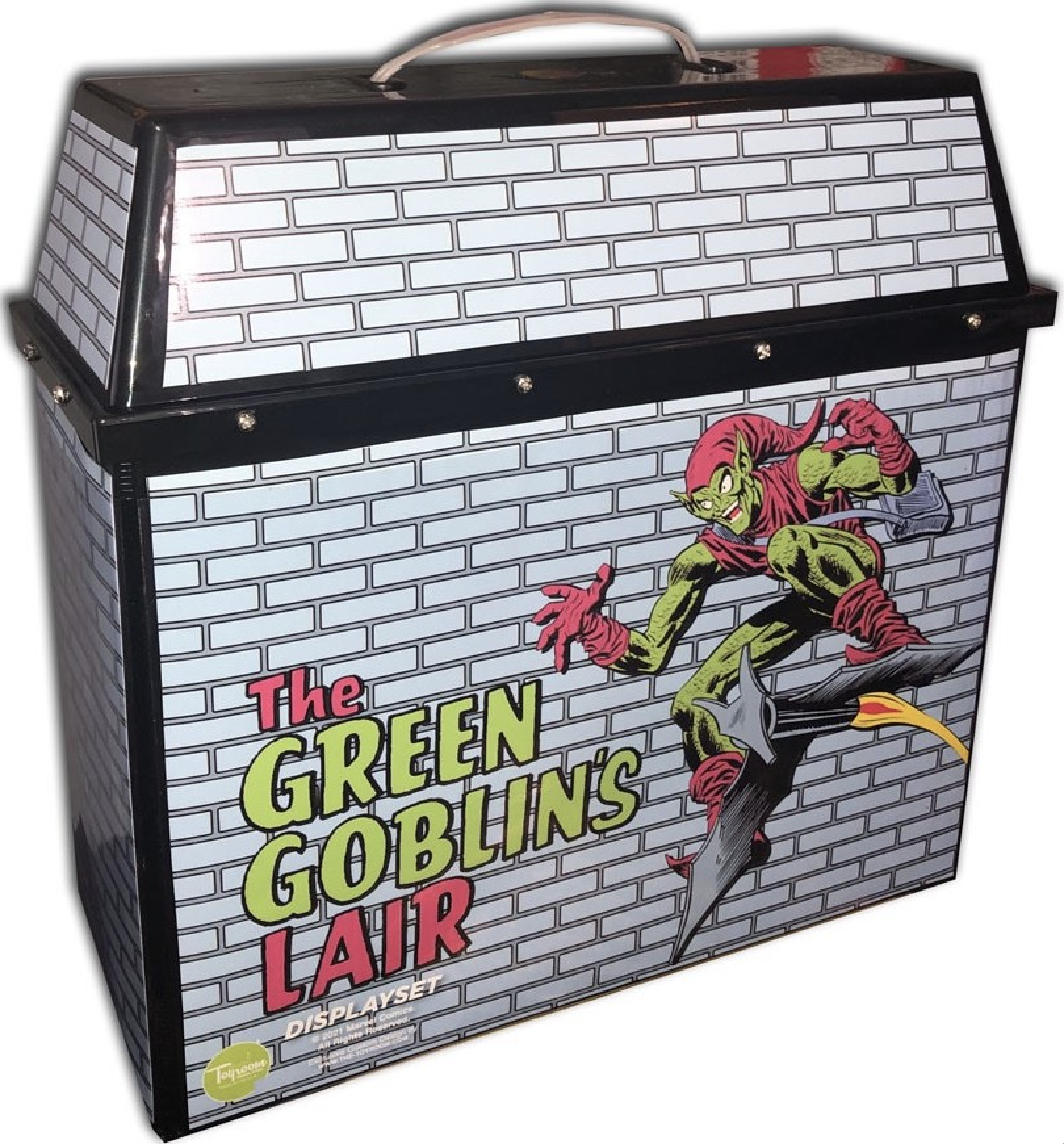 Dig this EXCLUSIVE FIRST LOOK — a TOYHEM special — along with Anthony’s commentary:

“Back in 2009, I did a tribox Green Goblin’s Lair using Dida Displays,” Anthony explained. “This displayset is a reboot and expansion, using many of the same ideas. 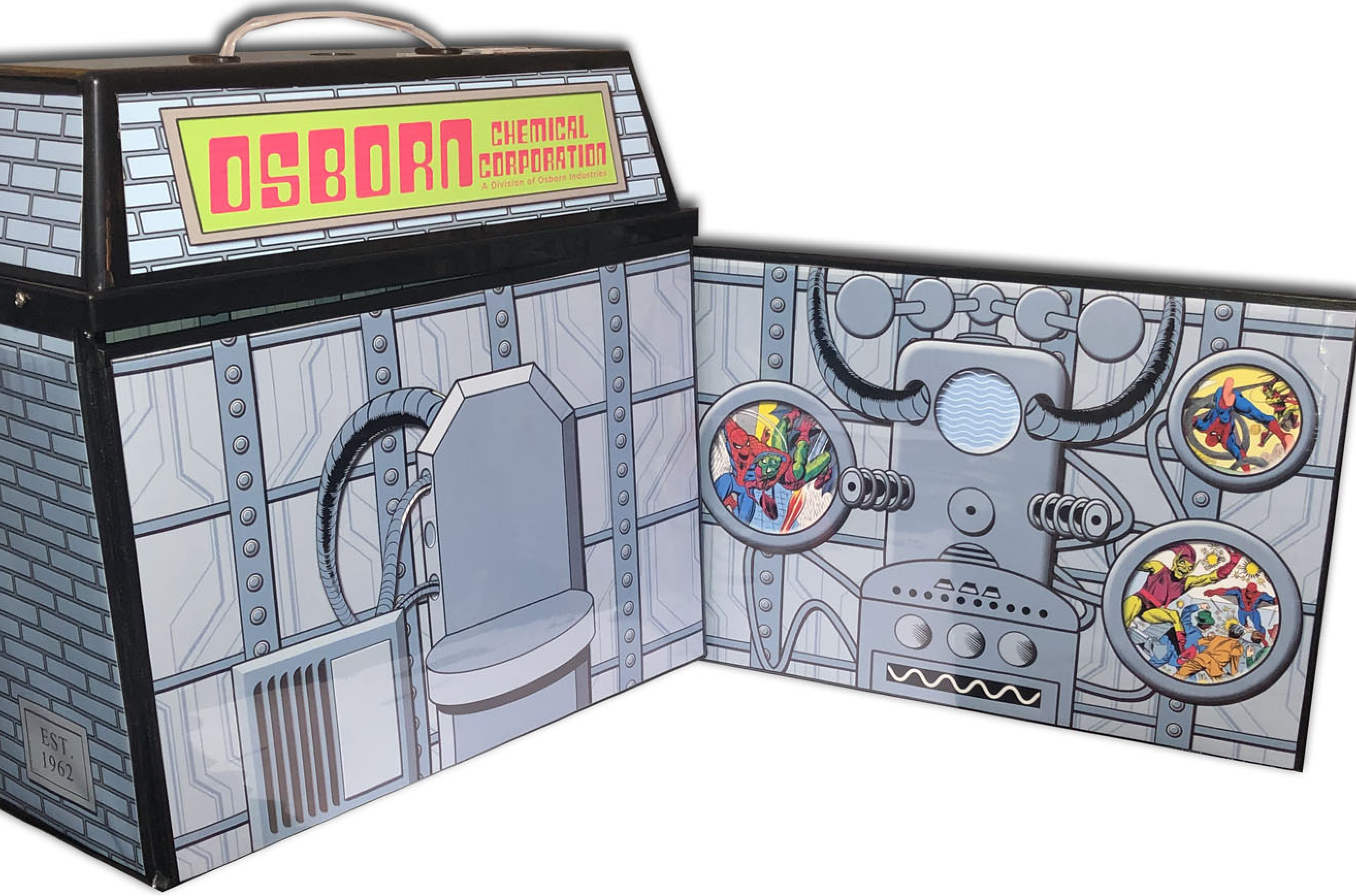 “It’s based on various lairs that Norman Osborn (and later his son Harry) had over the years at secret locations. The chair and the retroscope are from The Amazing Spider-Man #39-40, where Norman straps Peter in the chair and uses the retroscope to relive their past encounters. In the comic, the images from the past are just hologram-ish projections but I decided to make them actual TV screens. In continuity for the displayset’s purposes, Norman uses this device to relive his fuzzy memories, due to his often forgetting his Green Goblin persona,” he said. 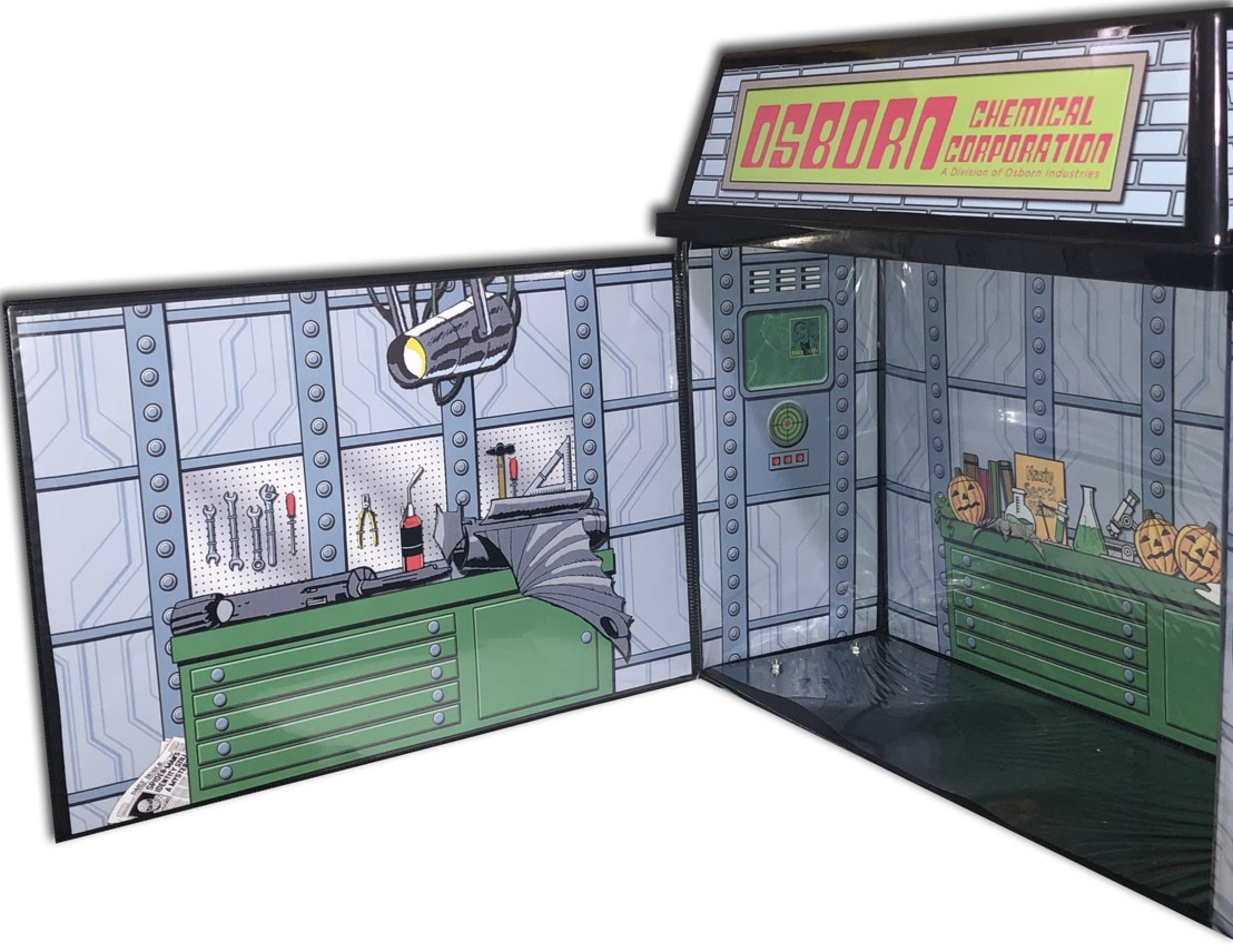 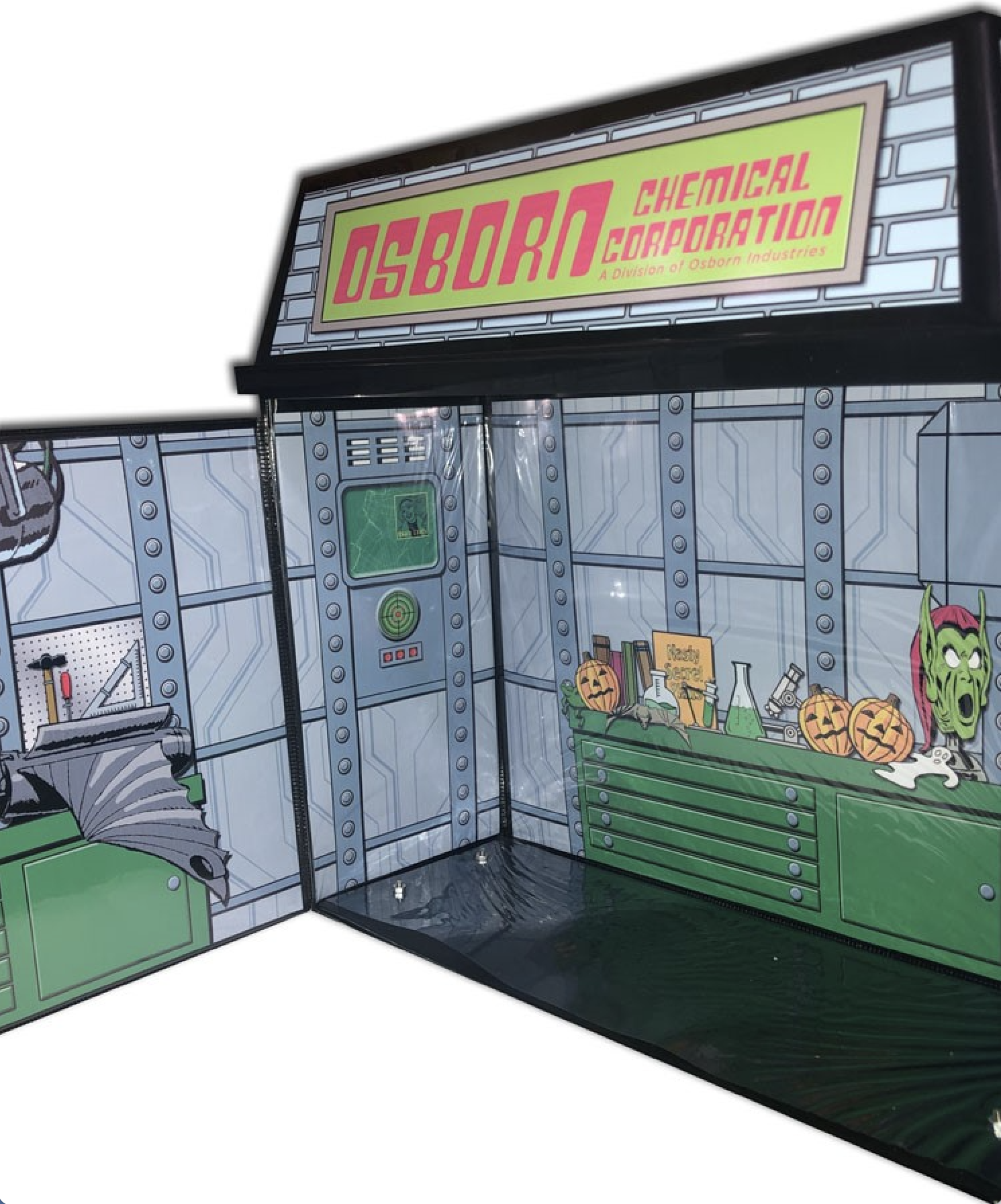 “The work bench is where the Goblin works on his Goblin Glider as well as the older model, the Flying Broomstick,” added Anthony, who is also a 13th Dimension contributor. “Above the bench is the Goblin Cannon, also from ASM #40. (Uh-oh! The tracking device seems to have located Gwen Stacy in Brooklyn!) 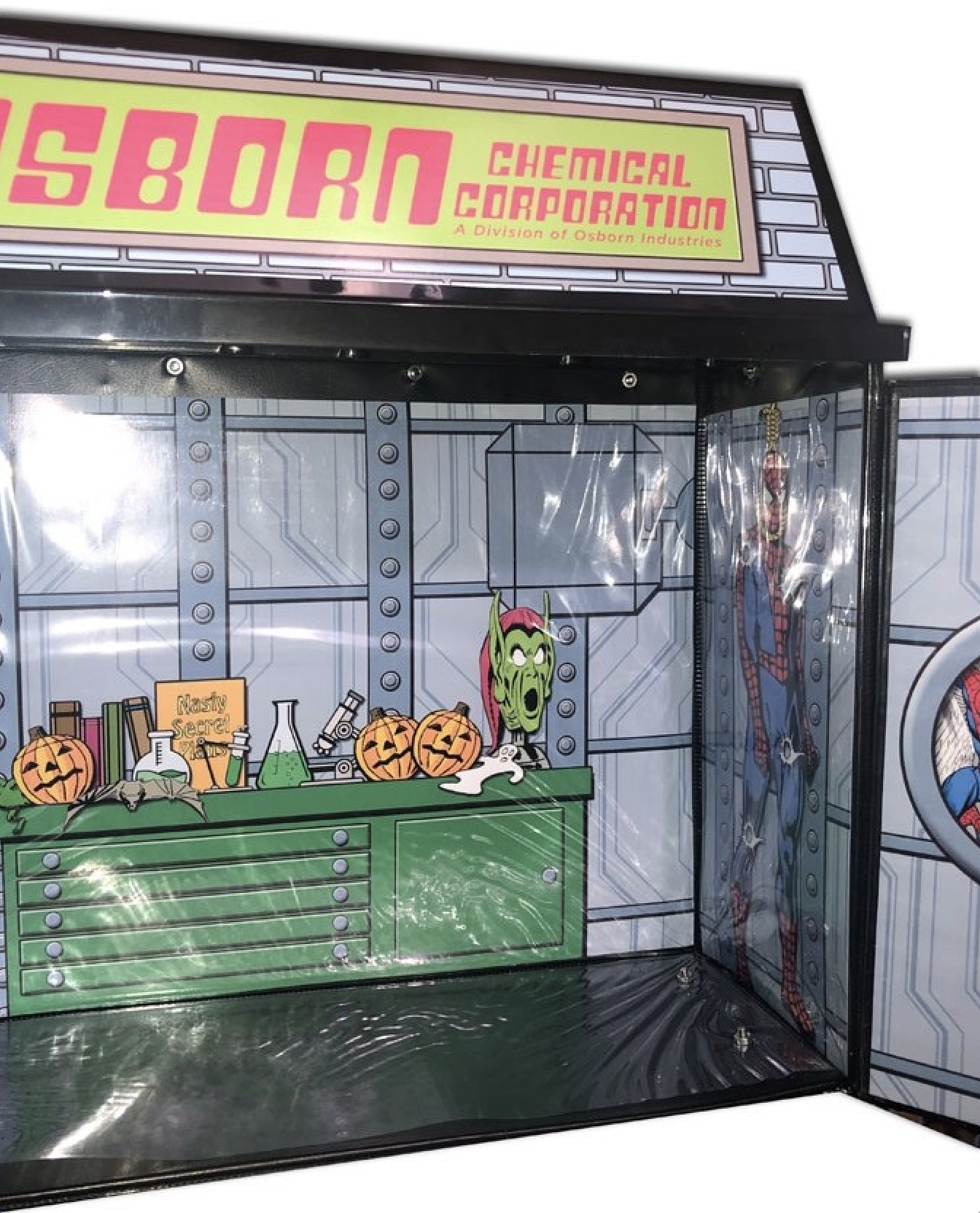 “The back-wall work bench features weapons from the Goblin’s arsenal (including pumpkin bombs) as well as chemical equipment for mixing the Green Goblin formula,” Anthony said. “The Nasty Secret Plans folder is a nod to Mego’s Supervator, which featured Spider-Man and the Green Goblin on packaging and in the commercials. In the background is the metal panel that would hide the Green Goblin’s face before his true identity (as Norman Osborn) was revealed.

“There’s also a noosed-up Spider-Man dummy that the Goblin uses for target practice,” he noted. 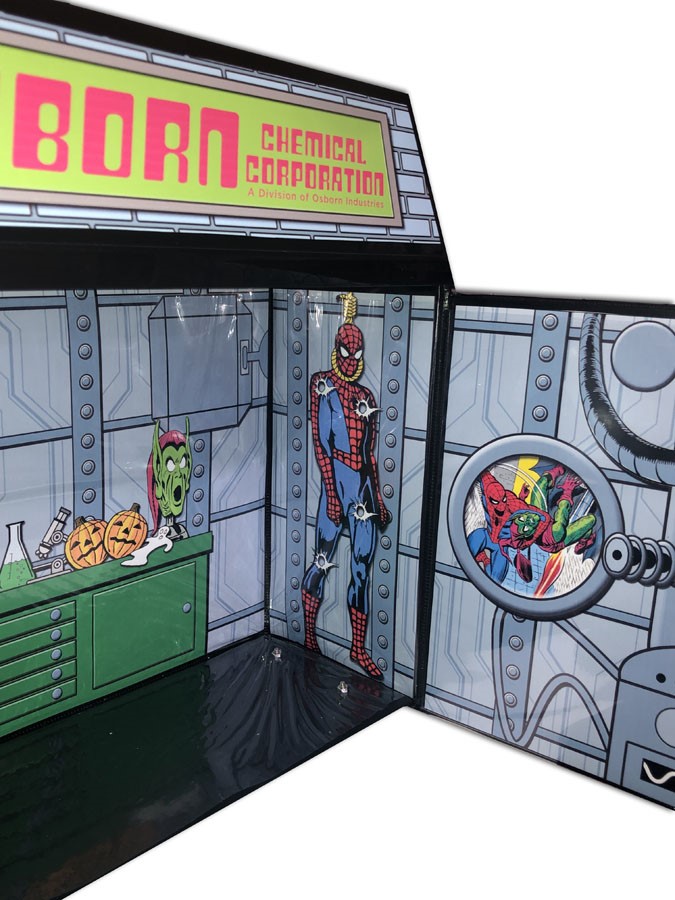 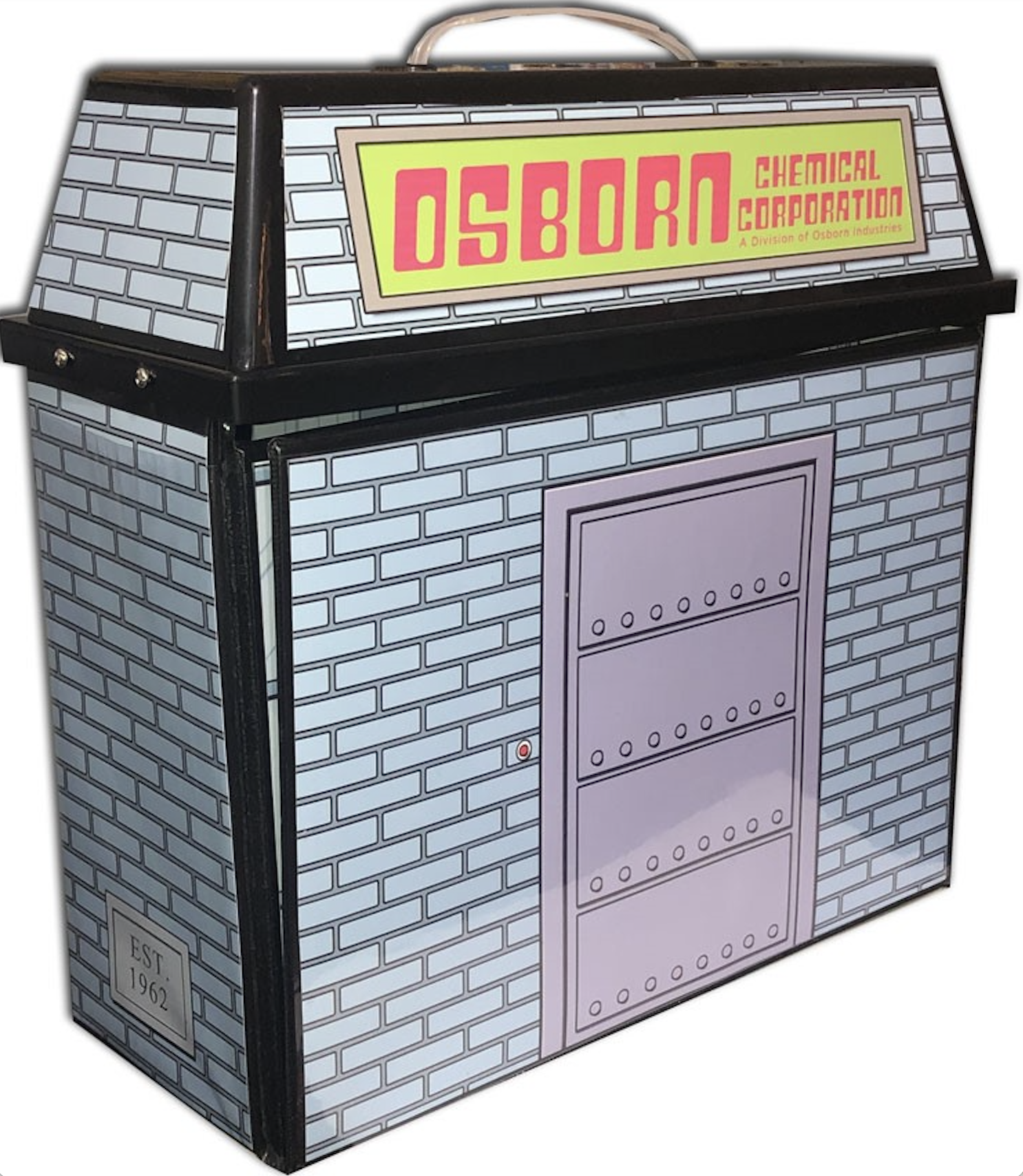 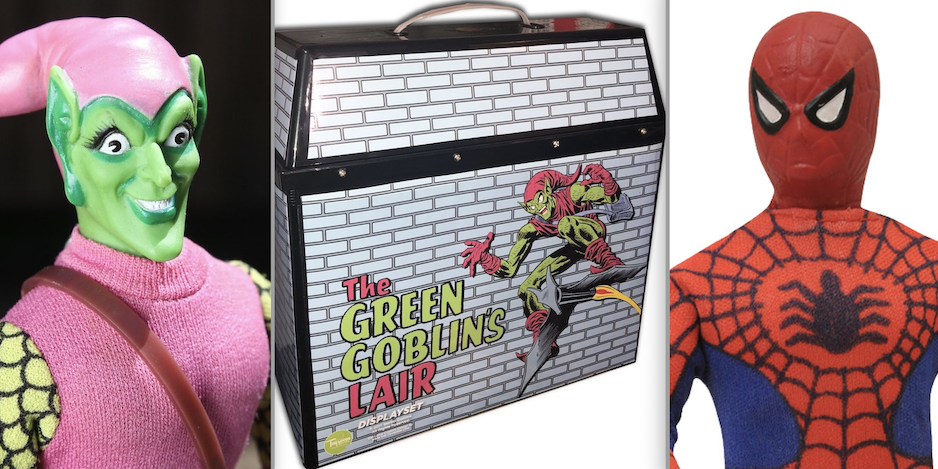 — 8-year-old Dan would have gone bananas for this.