In this installment of TOYHEM!, the ever-popular fantasy/comics painter Joe Jusko tells of the far out days of Captain Action — and his own role in CA’s enduring legacy.

This, I promise, you will dig. 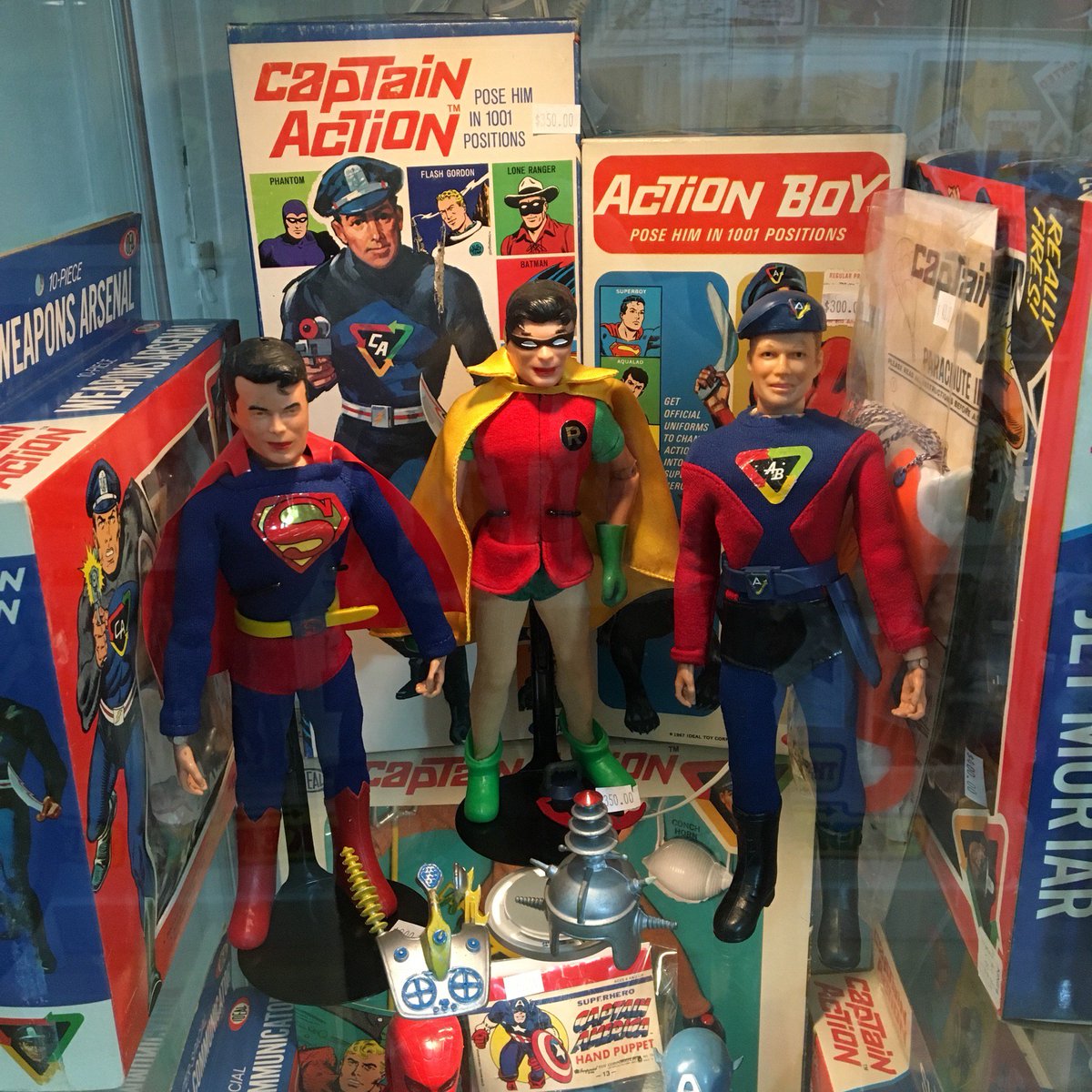 All photos from various sources.

I grew up a comic book kid. Both my father and older brother read them and being they were always around the house, my affinity for them was pretty much predetermined.

I also, of course, loved toys and the 1960s was a great time for them. There was such a variety (in my mind much more so than today) to choose from. Among my favorites were the Johnny Eagle and Johnny Seven OMA guns, King Zor, Horrible Hamilton, The Great Garloo, Big Lou, Creepy Crawlers and Defender Dan, a fully functional, belt-fed tripoded machine gun (!)

I also liked G.I. Joe, because I was able to act out my own stories and adventures with the seemingly endless variations of the figure line. But, while soldiers were great, what I really longed for were dolls (ahem, action figures) that would enable me to bring my comic book heroes to life.  Enter… 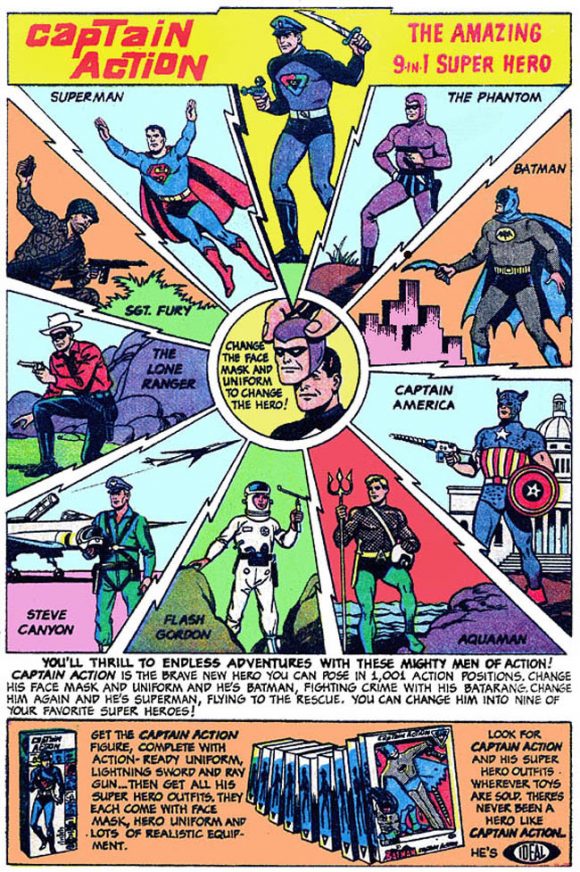 Developed by Ideal Toys in 1966 to capitalize on Hasbro’s G.I. Joe success and the Silver Age resurgence in popularity of superheroes, Captain Action was everything a comic kid could ask for! He wasn’t a soldier, he was an actual superhero, but not just ANY superhero. In a move that was ingenious for the time, Ideal was able to license major characters from both Marvel and DC, as well as the most popular strips from King Features and some pulp heroes, as well.

Captain Action wasn’t ONE hero, he could be ANY hero! For the first time ever there was a Spider-Man figure, a Captain America figure, Superman, Batman, Aquaman, the Phantom, Flash Gordon and the Green Hornet to name only a few. They covered every genre, including Westerns (the Lone Ranger and Tonto) and military (Sgt. Fury), obviously to ensure you wouldn’t miss your G.I. Joes. 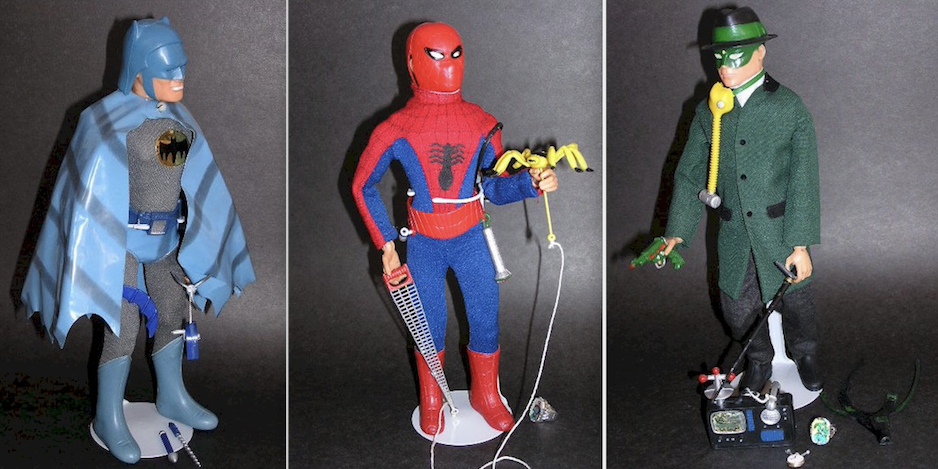 In complete contrast to the robotic, barrel chested G.I. Joe, I loved the attention to correct anatomy that helped sell the illusion when Captain Action was costumed as the various heroes. The figure was an instant hit and every kid I knew had at least one. 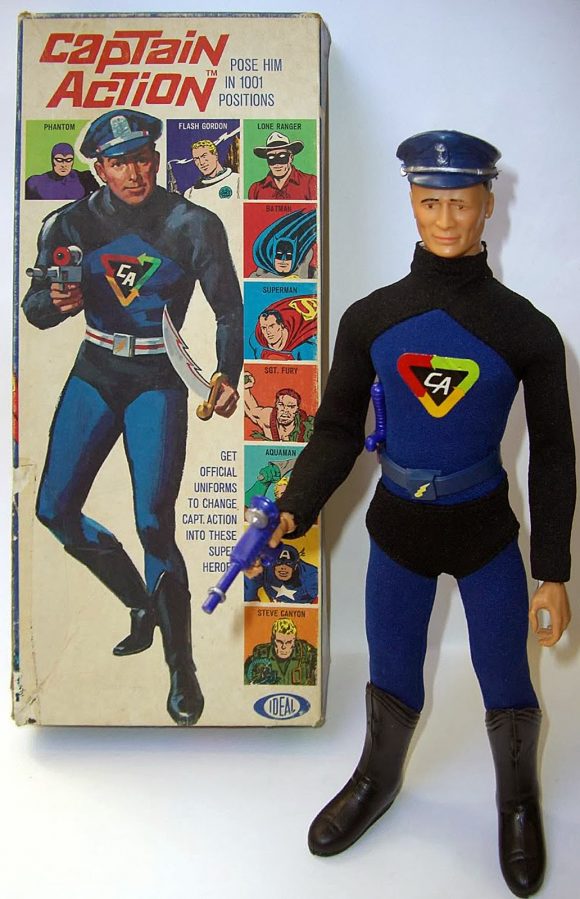 Every hero needs a villain and in 1967 Captain Action got one of the most unique in the alien Dr. Evil, a Swingin Sixties mod, Nehru-suited, sandalled mad scientist, sporting a huge medallion that would have made 1980s Al Sharpton envious. Oh yeah, he also had blue skin and an exposed brain (!) which he disguised with a human mask  (keeping him on-model with Captain Action). Dr. Evil came in a regular long box and as an extended accessory set. 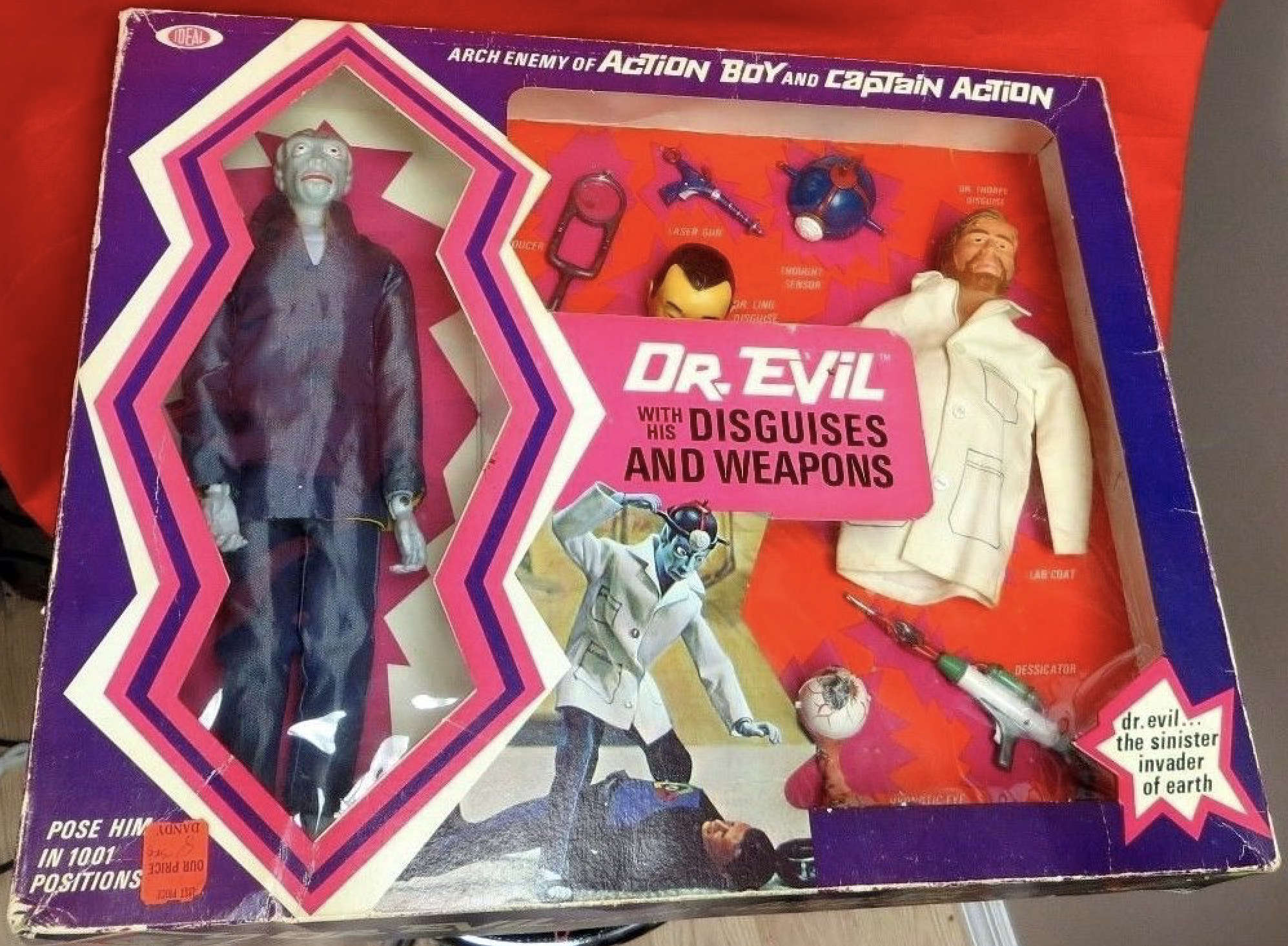 1967 also saw the addition of Action Boy — a kid sidekick who could change into Superboy, Robin and Aqualad — and an assortment of accessories like the Action Cave play set and the amphibious Silver Streak vehicle. Oddly, there were never any villain costumes licensed for Dr. Evil, so whichever hero Captain Action became, his nemesis would have to be Dr. Evil (who was obviously a very formidable foe to fend off all those different challenges). 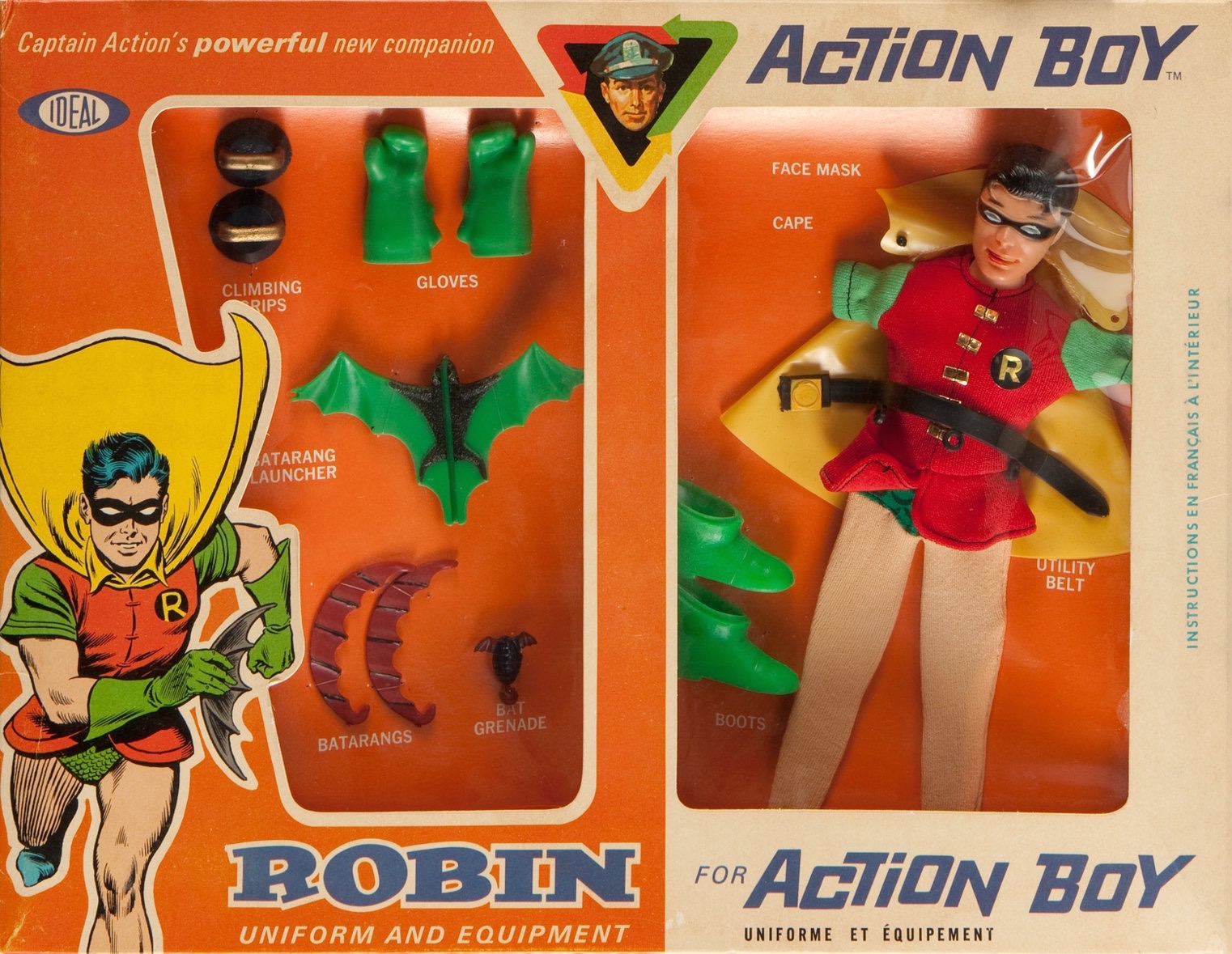 My parents unfortunately couldn’t afford to get me all the costumes or any of the extras like the Cave, Streak, jet packs, etc. and couldn’t see the reasoning behind buying two dozen of the “same doll.” My mom would visit my godmother on Sundays and there was a kid I befriended in her building who had a bazzilion CA figures and all the costumes. I remember being so jealous of that kid, but I looked forward to every visit just to sit in the hallway and play with his stuff.

One thing I could afford was the Captain Action comic that DC licensed in 1968. Initially drawn by Wally Wood and written by Jim Shooter, it was eventually completely taken over by Gil Kane, who created some of the most incredibly mindtastic stuff ever. The book only lasted five issues but I still have every one. 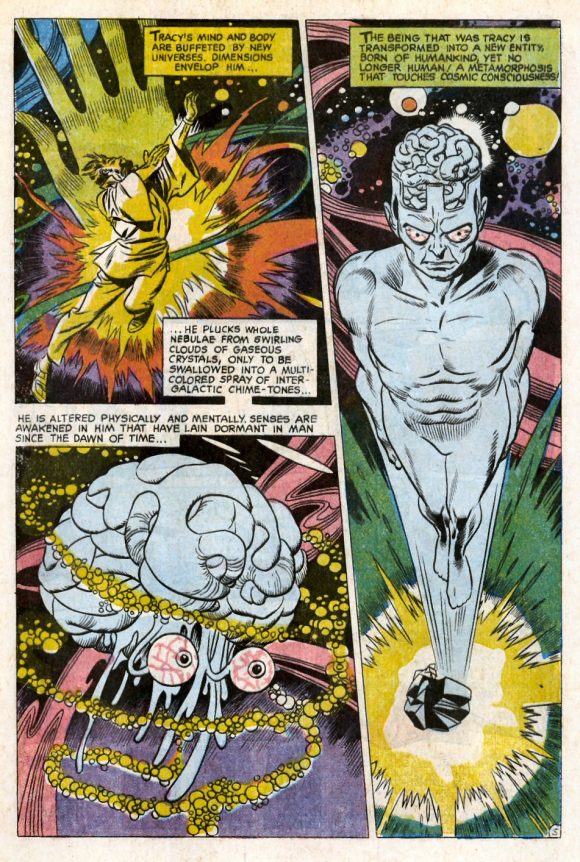 As I mentioned, if there was one drawback for most people, it was that to fully immerse yourself in the world of Captain Action, you needed multiple figures for all the costumes or you were relegated to switching out the costumes and playing with each individual hero. I believe that factor, as well as reports of parents being turned off by the Dr. Evil figure and the continued expense of licensing all the characters, sped the demise of the line. 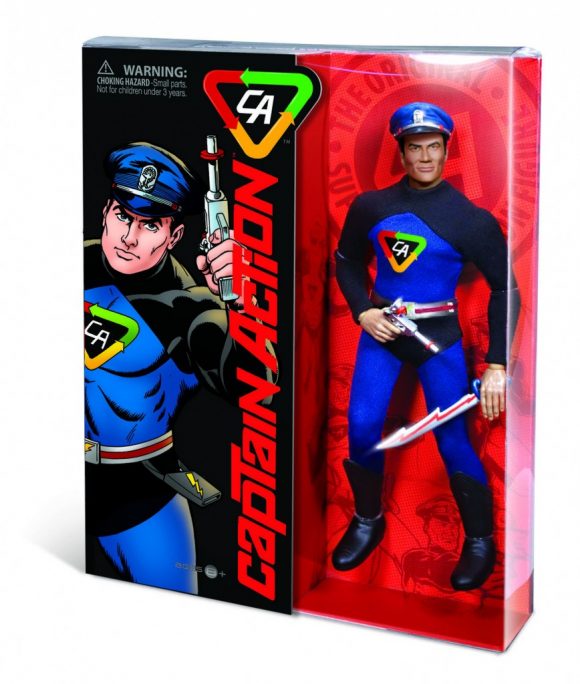 Still, Captain Action has remained in the public consciousness of a devoted fan base (of which I am one) and the figure line has been revived in recent years as both toys and comics. The 1960s omission of Dr. Evil villain costumes has been rectified and the figures are now completely interactive. 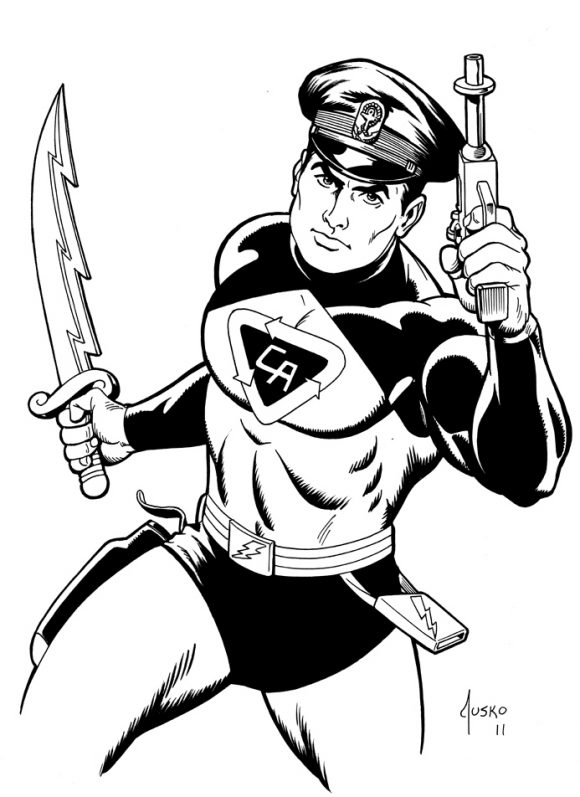 I had a childhood dream come true when Ed Catto and Joe Ahearn of Captain Action Enterprises asked me to create new box art for the revived line. More than 50 years later, I am now a part of the history of my favorite toy of all time, and the 7-year-old in me could not be more proud.

Joe Jusko’s most recent work was as cover artist for the new Overstreet@50, the 50th anniversary retrospective of the Overstreet Comic Book Price Guide. Click here.