The Amazing HALLOWEEN Comic That Wasn’t: SHAZAM! vs. DRACULA — by GENE COLAN

With Tom Palmer and Jerry Ordway! 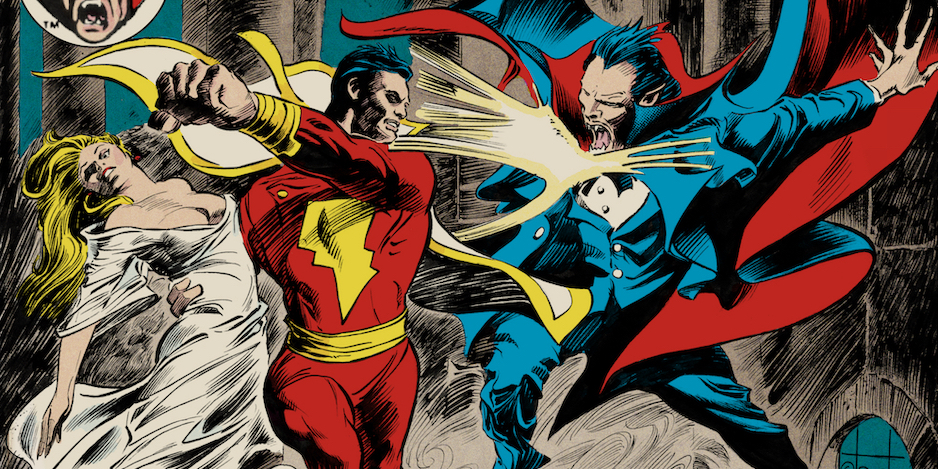 Walt Grogan has been a semi-regular here at 13th Dimension over the last year or so because I’m really taken with the top-notch work he’s done coloring commissions of comics characters, in particular the original Captain Marvel and the Earth-Two Robin — both of whom are the subjects of Facebook groups that he runs. (Click here for Robin and here for the Marvel Family.)

Frequently, I’ll see something that Walt’s posted online and say to myself, “Dang! I’d love that for a story!” So I asked him whether he wanted to do a piece for us where he could debut some of his work. Not only did he say yes, he even got topical on us with a great Halloween cover that should have been, featuring his beloved Captain Marvel teamed with Marvel’s Dracula. By Gene Colan. And Tom Palmer. And Jerry Ordway.

More than 20 years ago, back in 2001, Captain Marvel super-fan Mike Mikulovsky commissioned a truly inspired piece of artwork from the legendary Gene Colan. Colan was well-known for his work at Marvel Comics penciling Daredevil, Iron Man and Howard the Duck, but perhaps best known for his pencils on The Tomb of Dracula with Tom Palmer providing inks.

As noted, Mike is a huge Captain Marvel fan, and when I say Captain Marvel I mean the original “Shazam!”-shouting Fawcett/DC hero and no other! Mike didn’t just want good ol’ Cap drawn in a heroic pose, he wanted Colan to craft a cover featuring the Big Red Cheese battling the premier vampiric lord for the life of the World’s Mightiest Mortal’s unrequited love, Beautia Sivana. And what a piece it is! 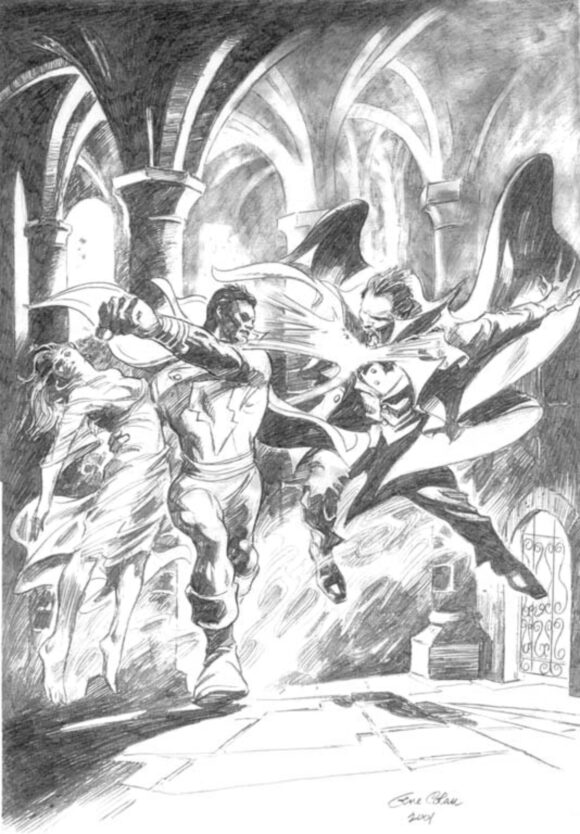 Not content with getting an awesome Gene Colan piece, however, Mike in 2003 commissioned Palmer to ink it.

So that got me thinking — what if Captain Marvel had fought Dracula in a Marvel comic — way back in 1975? What would it have looked like and what comic would it have appeared in? And wouldn’t it make a perfect piece to color for the haunted month of October?

Well, it didn’t make sense for DC’s Captain Marvel to just pop up in The Tomb of Dracula. I couldn’t imagine anyone twisting Marv Wolfman’s arm to make that happen and spoil the epic story he was telling. But what if there was another Dracula comic that Cap might have guest-starred in? 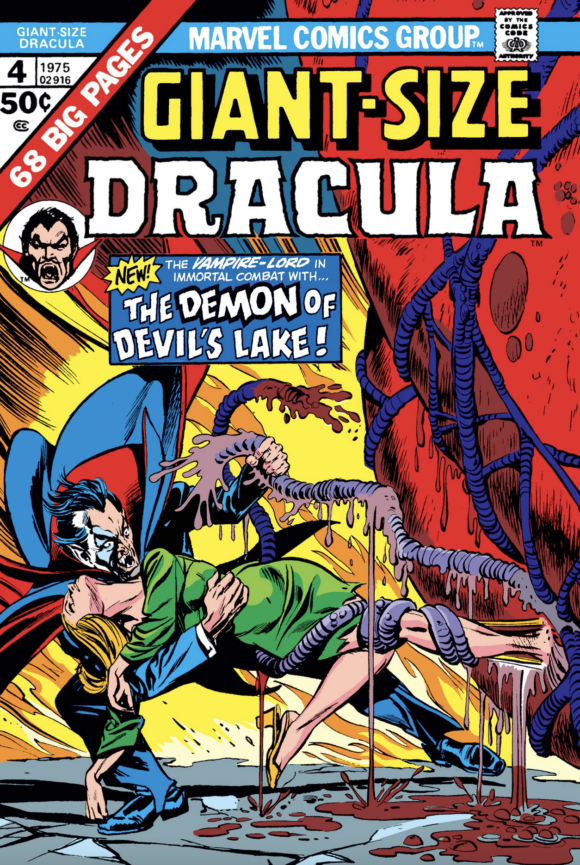 And what if that superhero was purposefully transported to the Marvel 616 universe by the World’s Maddest Scientist, Dr. Thaddeus Bodog Sivana, who accidentally also transported his  daughter there as well? Does it have to make sense? No — but that’s the fun of comics.

Now normally, I don’t create faux covers for Marvel titles as I’ve been a DC fan for over 60 years. Not that I have anything against the House of Ideas — they were always in my reading pile. It’s just that my allegiance swings toward the Distinguished Competition. So, when I decided to tackle the task of coloring this piece, I knew that I had to do it in the Mighty Marvel style of the time! 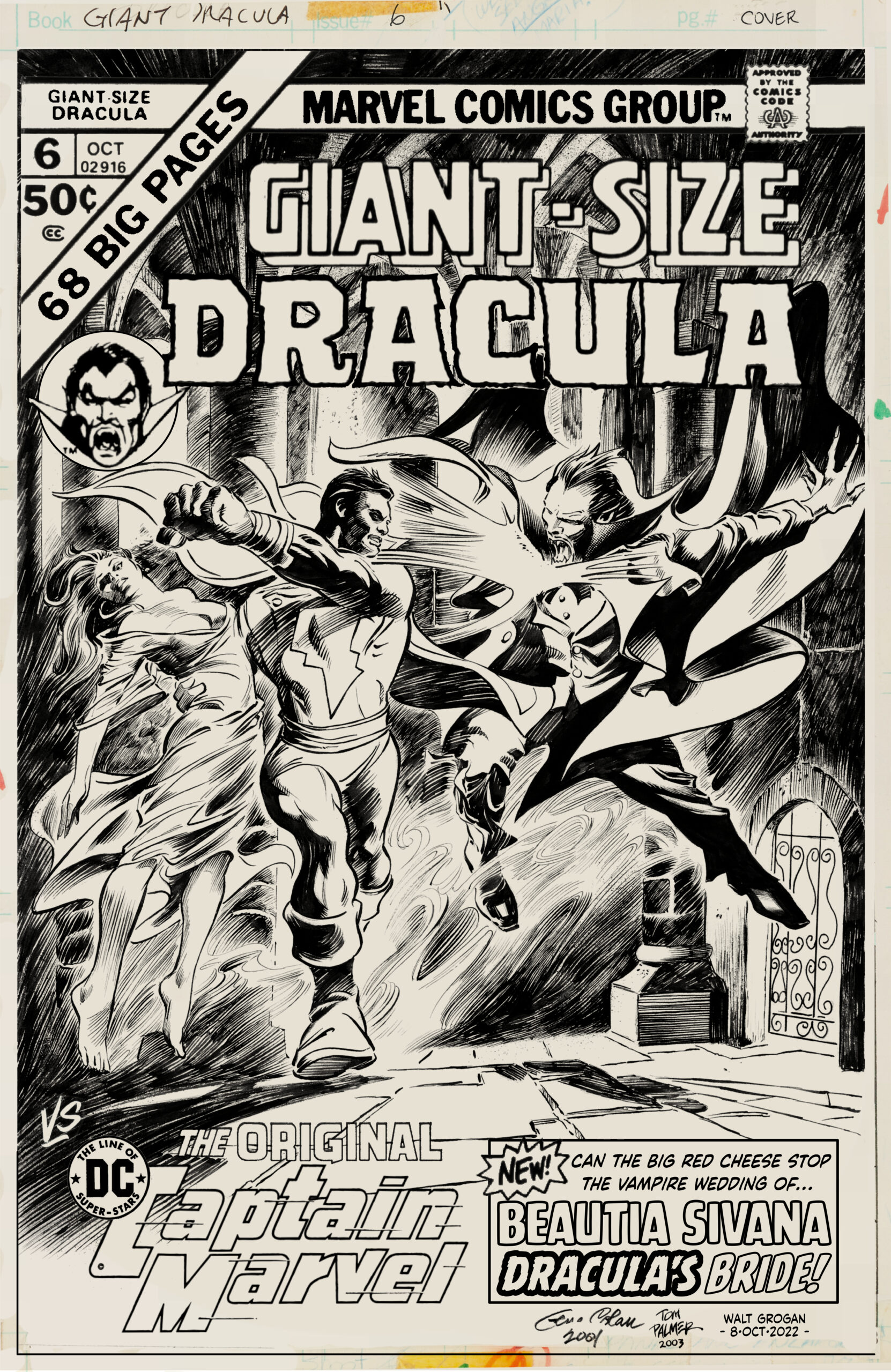 After settling on Giant-Size Dracula as the title, I started to color Gene and Tom’s masterpiece. The coloring had to be dark and moody to fit in with The Tomb of Dracula milieu. I settled on various shades of gray and dark blue and I set the scene at night. Since this was Dracula’s book, the battle had to take place on his home turf when he would be most powerful! I elected to color the three main characters in their respective primary hues to make them pop off the cover as much as possible.

Once I finished with the coloring, it was time to drop in some trade dress which, although time-consuming, is my favorite thing to do. Giant-Size Dracula ended with Issue #5, so had it continued, this would have been the sixth issue. I decided that the publication month would be October as it seemed most appropriate.

It would only be natural to call out the guest star on the cover but due to the limitation of the logo placement at the top, I had to move it to the bottom. In a moment of inspiration, I thought maybe, just maybe, because this was a Marvel book, Stan would have allowed the Captain Marvel logo to adorn the cover! Face front, True Believers! 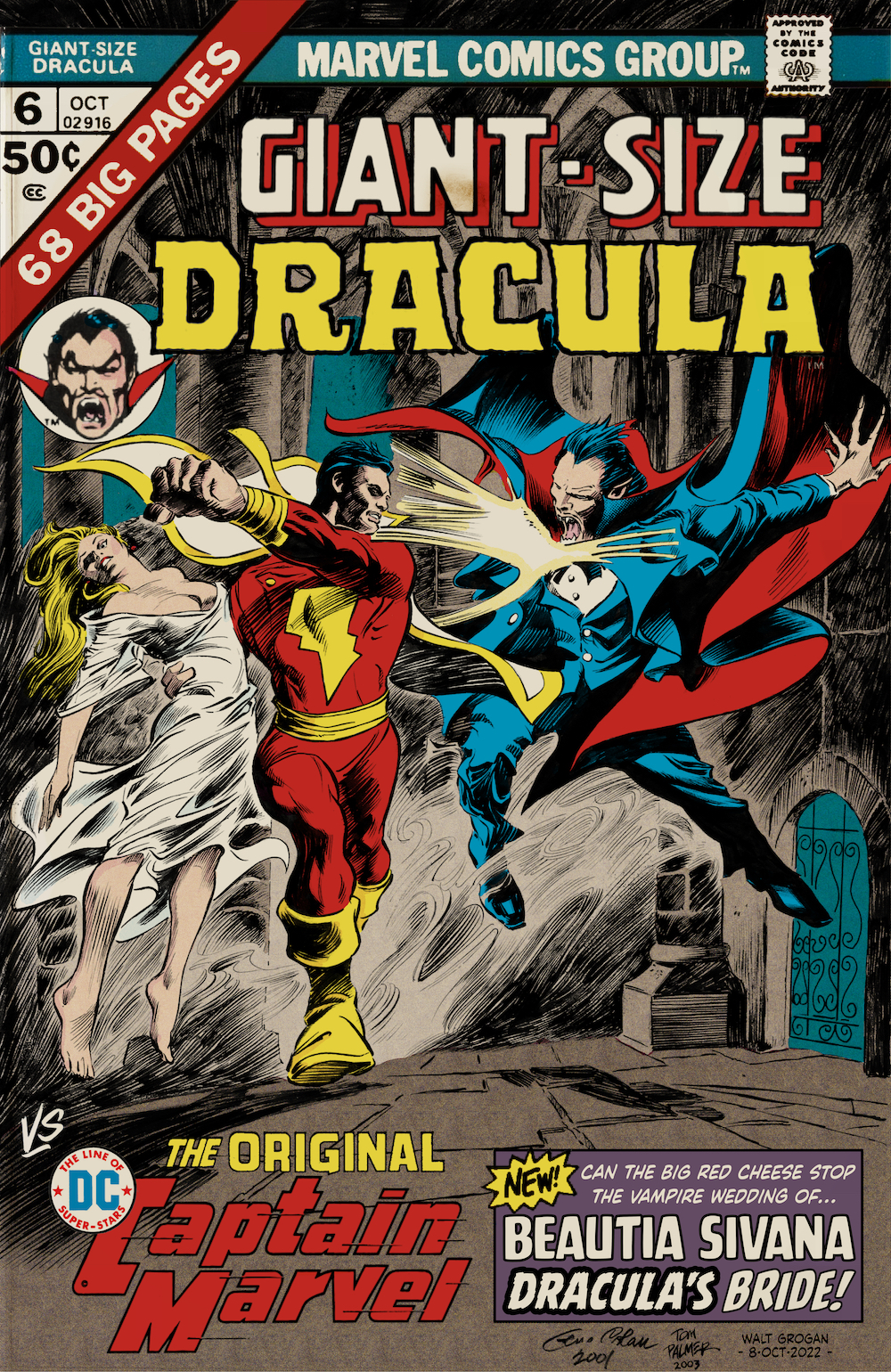 I had to get DC’s name out there too, and the DC Bullet designed by Michael Uslan fit perfectly where Cap’s Fawcett bullet resided in the Golden Age. Since this was a battle to end all battles, I dropped in one of my favorite pieces of lettering, the “vs” from the Superman vs The Amazing Spider-Man treasury edition.

There was only one last thing to do, which was to add a call-out box trumpeting the plot of the story. With the gorgeous Beautia Sivana on the cover, it had to be about Dracula’s lust to make her his vampire bride.

I really like the way the colors turned out. They matched the mood established by Gene’s pencils which were, in turn, enhanced by Tom Palmer’s inks.

That said, everyone knows there’s no right way to ink Gene Colan, and, OK, maybe there are some wrong ways to ink him but there’s only one Ordway to do it! What if Joltin’ Jerry Ordway inked the same piece in his own inimitable style?

You don’t have to imagine it: Here’s where super-fan Mike Mikulovsky came through again. Back in 2001, before getting Tom Palmer to ink Gene’s pencils, he asked Da Ordster to ink the same piece on a lightbox and Jerry came through like a thunderbolt! It’s not often that you get to see Gene Colan’s moody, distinctive style inked with a more traditional superhero approach, and seeing Jerry’s inks on this is definitely a Halloween treat. 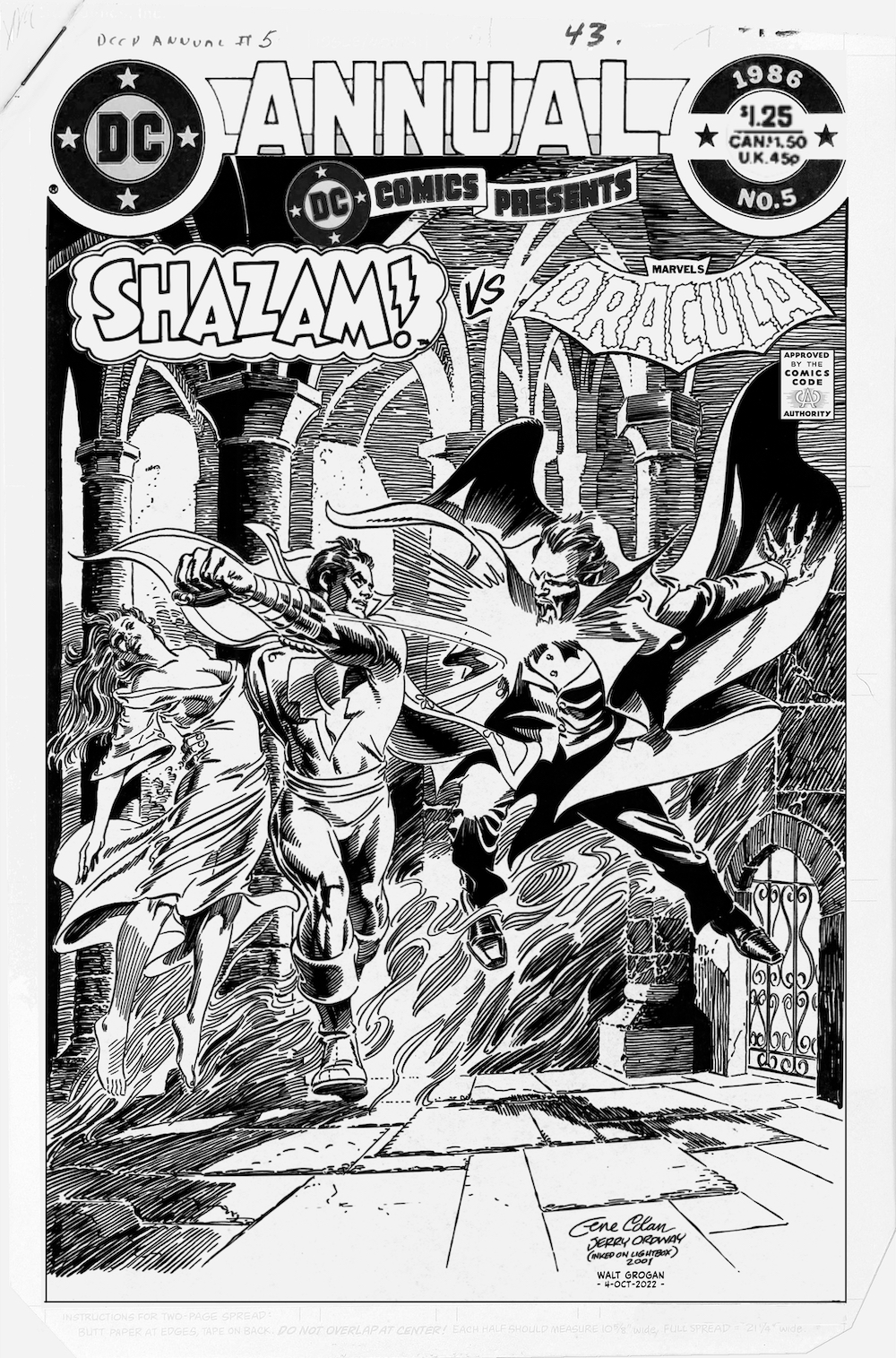 Remember that in the ‘80s, Gene did a stint at DC Comics drawing Batman, Wonder Woman, Nathaniel Dusk, and Night Force among others — so Jerry inking Gene wouldn’t be that unusual, especially on Captain Marvel.

For this piece, I colored the main three characters using the same scheme as the Giant-Size Dracula cover but because this would be DC’s turn at hosting the team-up, the castle walls, the light coming in and the castle floor had to be brighter. In fact, because Jerry’s inking on the columns and interior suggested daylight, in this Earth-S universe, the battle would take place at sunup when Dracula would be at a distinct disadvantage.

With the tone of the piece decided upon, I had to choose a trade dress but Captain Marvel has never had a team-up book at DC. In fact, discounting mini-series and one-shots, the Big Red Cheese has only ever had four ongoing series at DC for a total of 119 issues across 50 years. That meant I had to take some creative license. 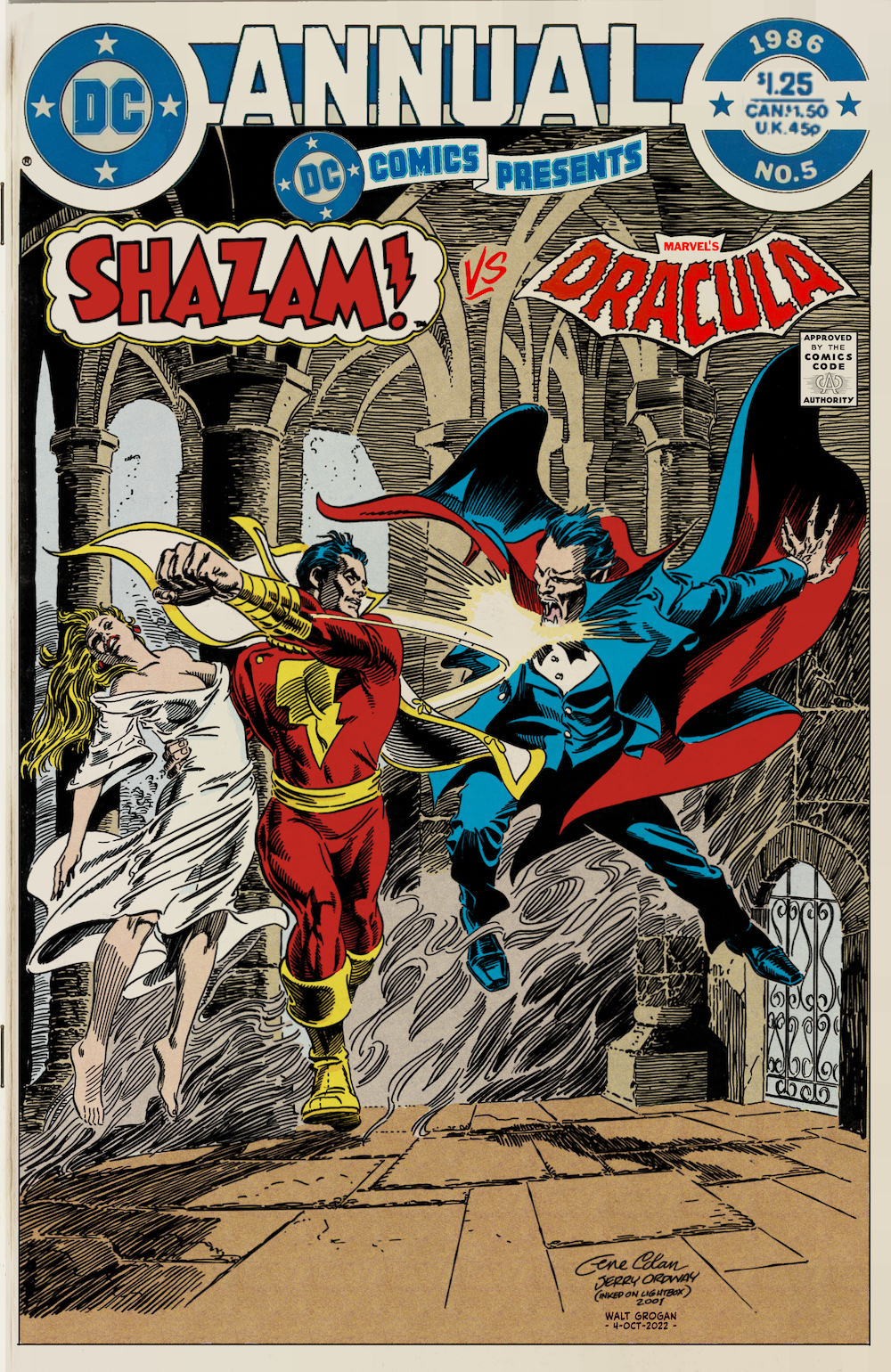 Because of DC Comics Presents’ banner style, I knew that I had to use The Tomb of Dracula logo on the cover but I decided to eschew “The Tomb of” and just stick with Dracula. Still, there was nothing to indicate that this was Marvel’s Dracula and then it hit me — just add “Marvel’s” to the Dracula logo!

Then all I had to do was add the traditional SHAZAM! logo to finish it off — this was a DC book, after all, so there was no way Marvel was going to let DC use the words “Captain Marvel” on the cover! And Holy Moley, it looked just like a DC Comics cover of the time!

I worked on these off and on for about a week and by the end, I was experiencing a bit of a Mandela Effect. I almost started to think they were real comic books!

It was a lot of fun creating these two mock covers from the fantastic artwork of Gene Colan, with incredible inks by Tom Palmer and Jerry Ordway, and coloring them and trade-dressing them in two different styles. I don’t know if I’ll come across a scenario like this again.

— A Nifty Page Turn and the Quiet Genius of GENE COLAN. Click here.