SUPERMAN VS. MUHAMMAD ALI Action Figures Are a Kitschy Blast

REVIEW: One of the strangest team-ups in comics history makes for a strange action-figure set. 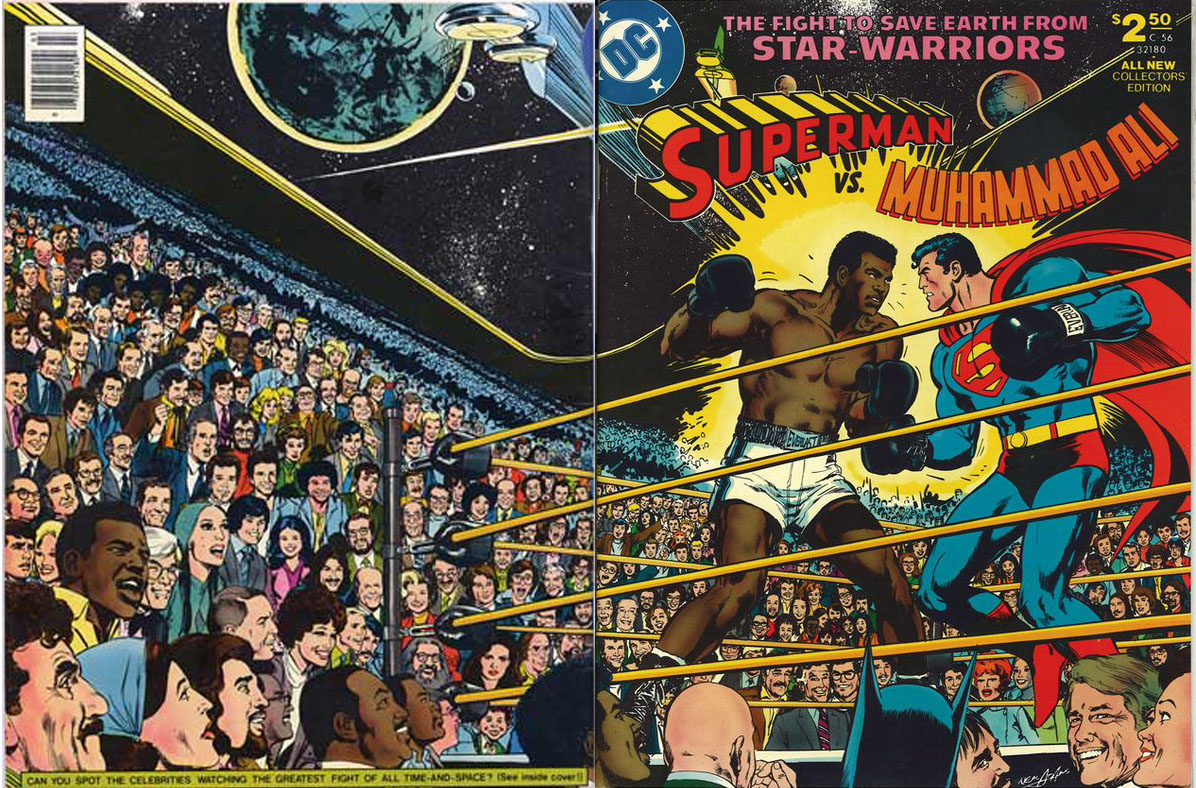 But nonsense in the best, Only In Comics way: The story is silly and contrived while the Neal Adams art is fantastic and fantastical.

No wonder people still talk about it almost 40 years after it came out. I mean, DC just published a pseudosequel in Harley’s Little Black Book #5, written by Amanda Conner and Jimmy Palmiotti and featuring Adams art. (Click here for a special look at the original art for the issue.)

A few years ago, DC jumped back in with a hardcover edition and a statue of the Man of Steel and the Greatest going toe to toe: 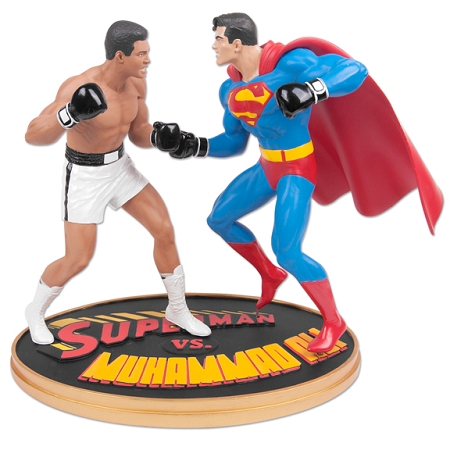 But now, NECA’s getting in on the action in the ring.

Last week, we brought you the news that sister company WizKids would be producing a special set of Superman vs. Muhammad Ali HeroClix. (Click here.) 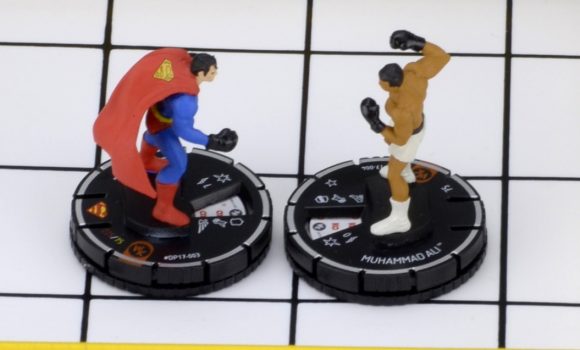 But NECA itself has produced a 7-inch-scale 2-pack that’s just been released: 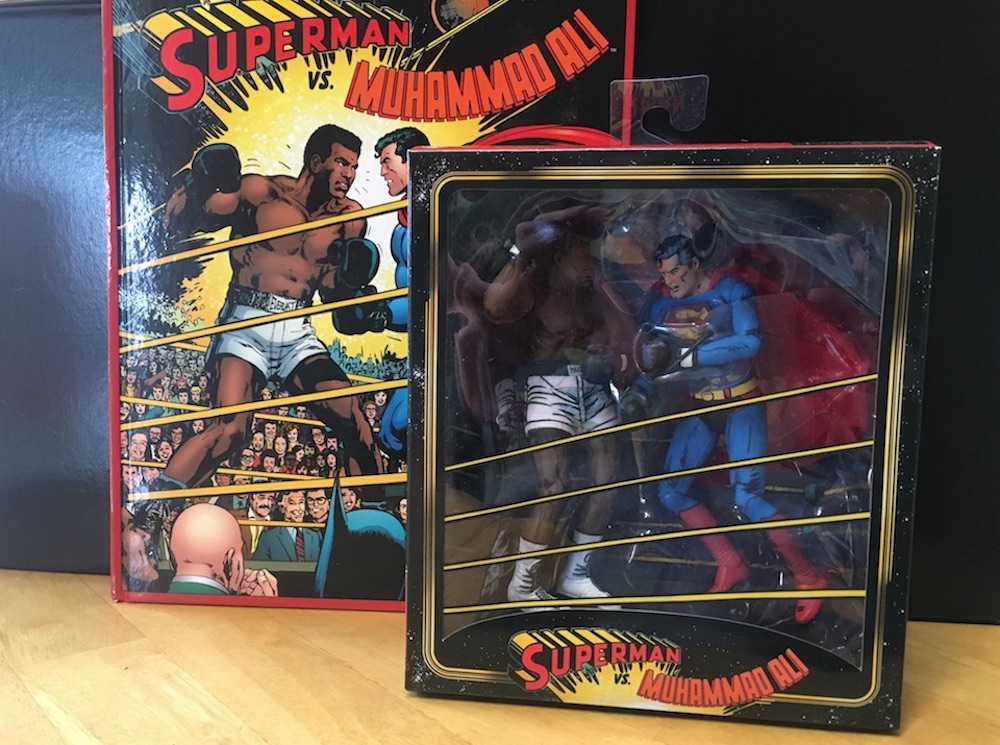 These are, doubtlessly, two of the strangest action figures I’ve ever seen. That’s not a pejorative. It’s just that these two very much fit the oddball vibe that’s always been infused with this project.

It comes down to the paint job. Supes and Ali aren’t just sculpted to look like their counterparts — they’re painted to approximate Adams’ art. (DC Collectibles has produced figures based on Jim Lee’s artwork in a similar fashion.) 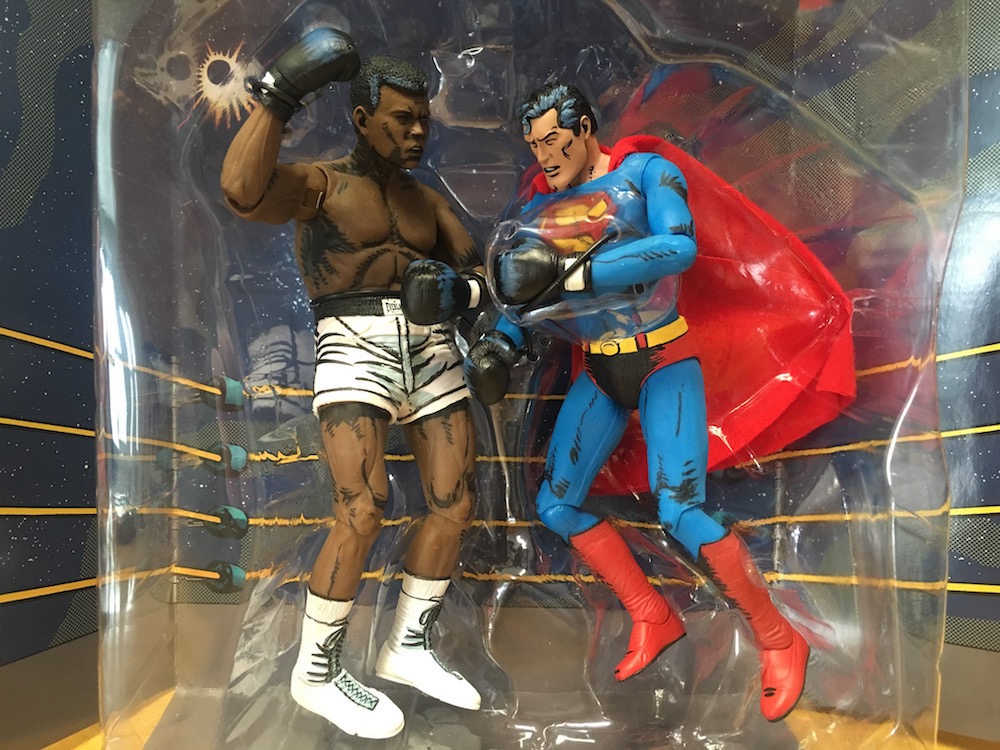 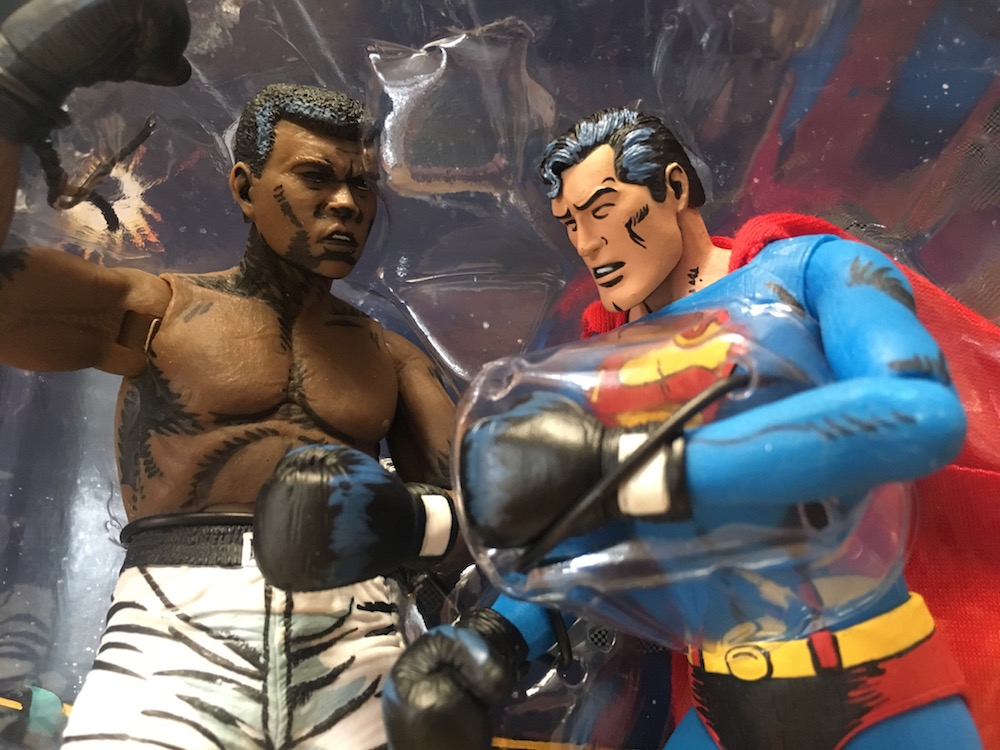 The result is a kitschy set that is, if not unique, then certainly uncommon — much like the comic itself.

The packaging is great. Superman and Ali are posed in the box similar to how Adams drew them on the famous wraparound cover of the original All-New Collector’s Edition #C-56. The plastic and bindings keep the figures frozen in place.

Actually, I normally review figures out of the box but I’m leaving these as they are because I think this is the perfect way to showcase them and I’m afraid I’ll never get them back in the package properly. 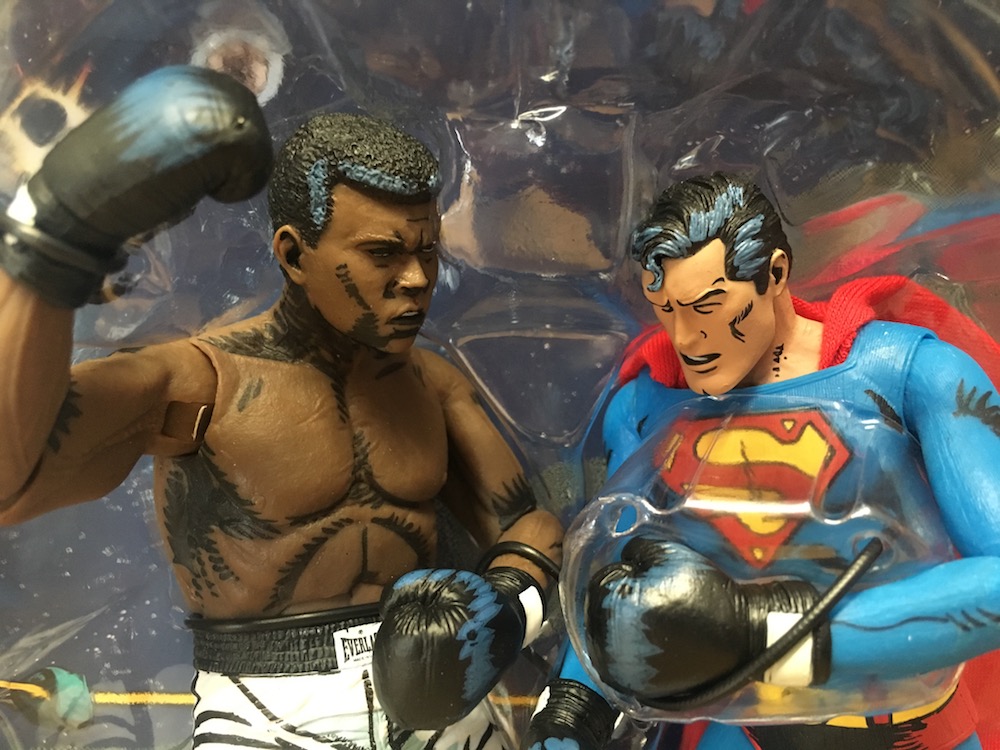 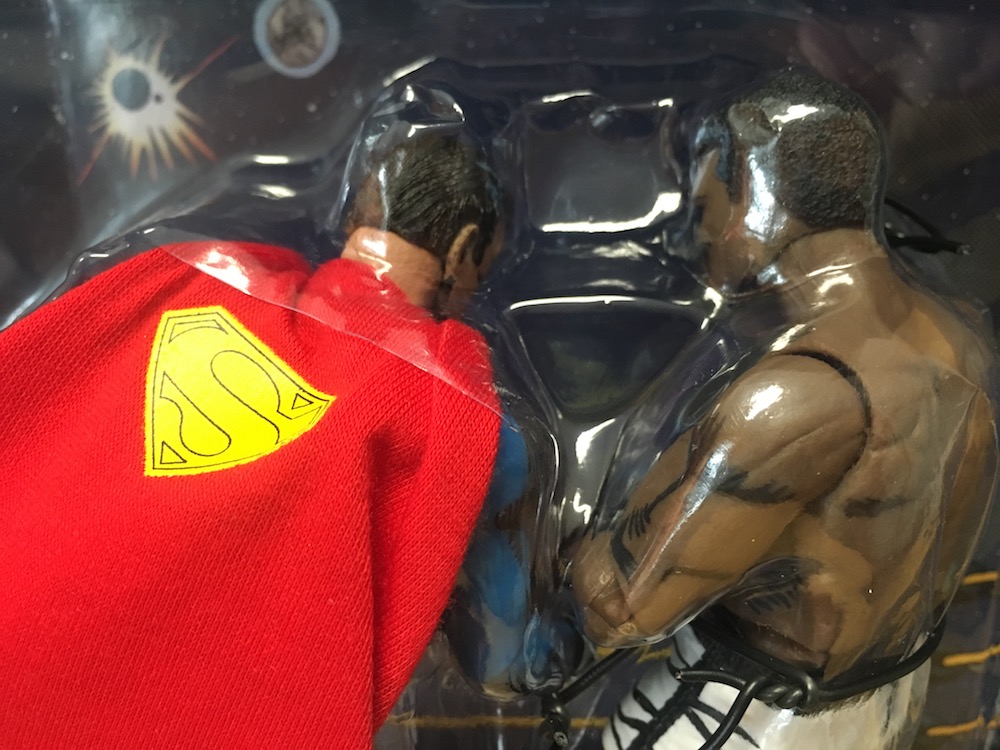 From what I can see, the articulation is sound, with Ali even having jointed feet. Superman also has interchangeable hands. (He’s basically the same sculpt as NECA’s Christopher Reeve Superman, but the paint job makes him look more muscular a la Adams. Ali appears to be based one of the company’s Rocky figures.)

The box itself is a further tribute to Adams’ famed cover, with the trade dress and colors matching the original. 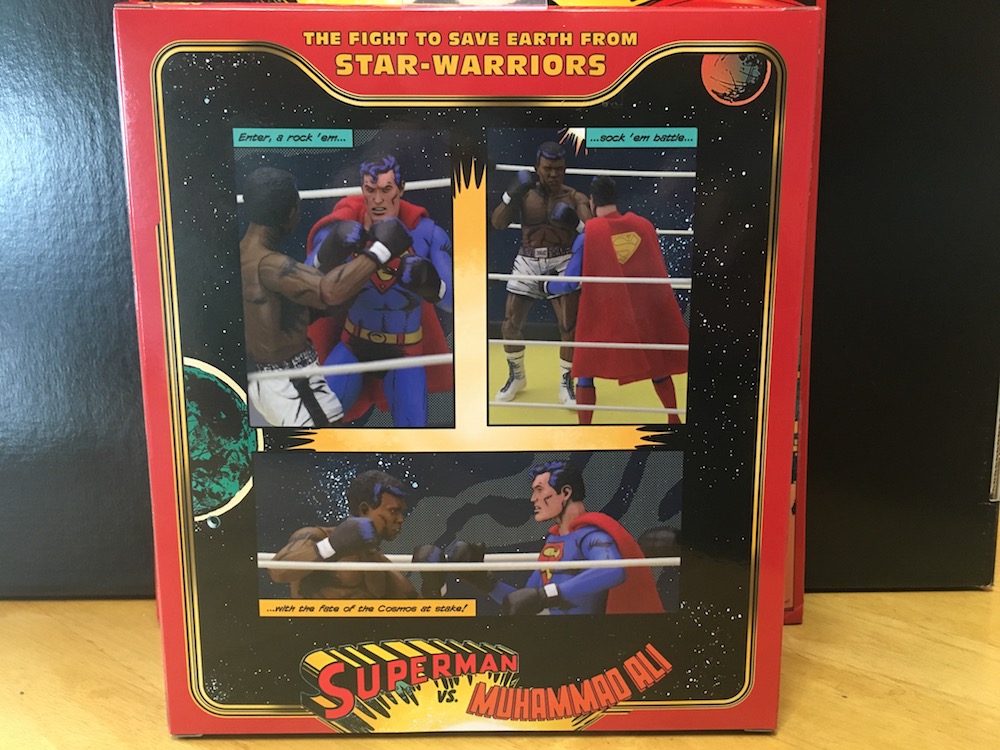 All in all, the set is a split decision. Is it for everyone? No.

But is it for fans who like offbeat items that celebrate offbeat comics? That’s a resounding yes.

Superman vs. Muhammad Ali from NECA is available now. It’ll cost you about $40 or so, but shop around.