Step Into the World of KLARION #1 With Nocenti and McCarthy

We talk to the team on DC‘s latest foray into the occult, which comes out 10/8.

I have a confession to make. I’m not a big occult guy. I never have been. I’ve always been drawn to noirish stories or to larger-than-life superheroics. But the magic stuff isn’t really for me.

But as soon as DC announced the new Klarion book, I wanted in. Writer Ann Nocenti is one of the coolest, most interesting people in comics and a helluva storyteller. And I really dig Trevor McCarthy‘s art. They could do a book about guy who has to stand in a guard shack all day and I’d read it.

We’ve profiled both of them at 13th Dimension recently (Ann here and Trevor here) but I wanted to really shine an eerie light on their new book specifically, and so here we are with a double MIGHTY Q&A: 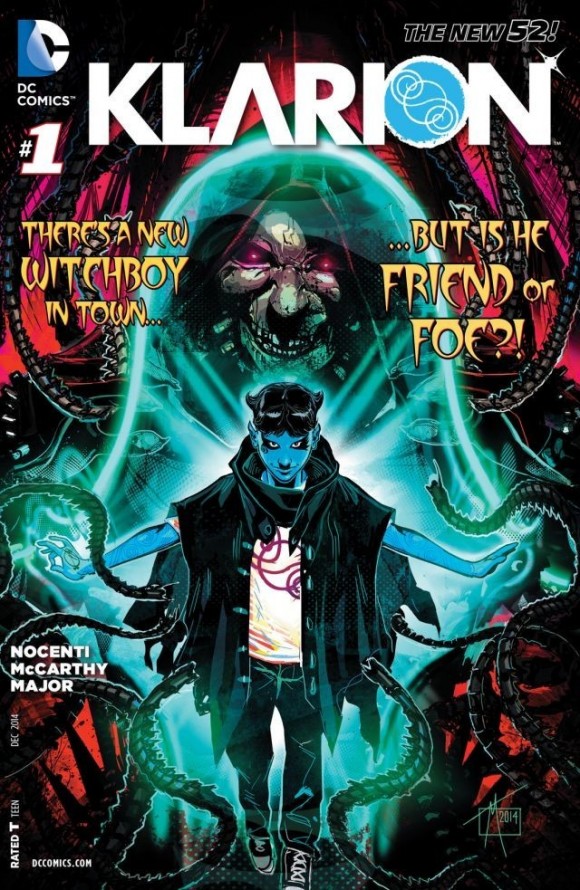 Dan Greenfield: What drew you to Klarion, a character that has a small but cult following? Did you pitch the book or was it pitched to you?

Ann Nocenti: The book was pitched to me by DC editorial. They had me at “Klarion’s a Jack Kirby character.” The first time I flipped through a Kirby comic and saw how impossibly possible his figures were, I was a fan. I met him once and was stricken with super-shyness. I could barely mumble “Nice to meet you, sir.” So, even though Klarion is a very minor Kirby character, I was intrigued. Then I read the Grant Morrison miniseries and enjoyed how impulsive and amoral Klarion seemed to be. 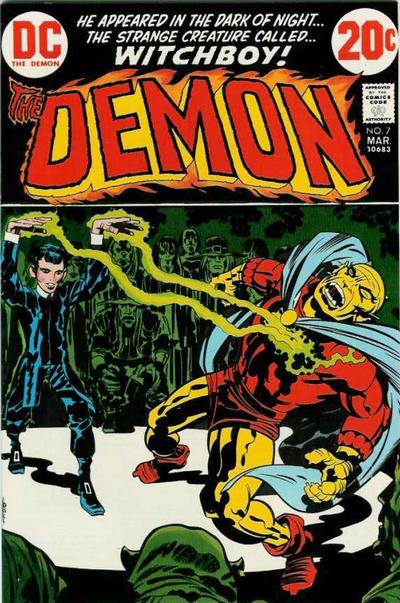 Are you planning on bringing in a lot of DC’s occult characters as guest stars or is Klarion going to go it alone for awhile?

My first plot draft had a score of DC supernaturals, all noticing Klarion’s bratty arrival on Earth, and reacting the way a herd of horses would swat away a particularly ornery horsefly. Then Klarion met his crew of wizards. The first issue would have had a cast of hundreds. Luckily, our editor Harvey Richards asked me to pull back on my ambitiously epic first issue. So we’re building Klarion’s world first, then bringing in a few DC occult characters.

You been very eager to tout Trevor McCarthy’s work. Describe how you two collaborate.

Trevor is wildly creative and every page astounds me. His style is seductive and magical, and he’s doing incredibly inventive things with page design. I am really, really lucky to be working with him. Bob Harras had sent me a link to his work and I was sold instantly.

I wrote character descriptions for each new character, describing their essential nature more than their visuals, except for a few key visual notes that related to their origins, since all the new characters are twists on classic myth, folklore, legend or history. 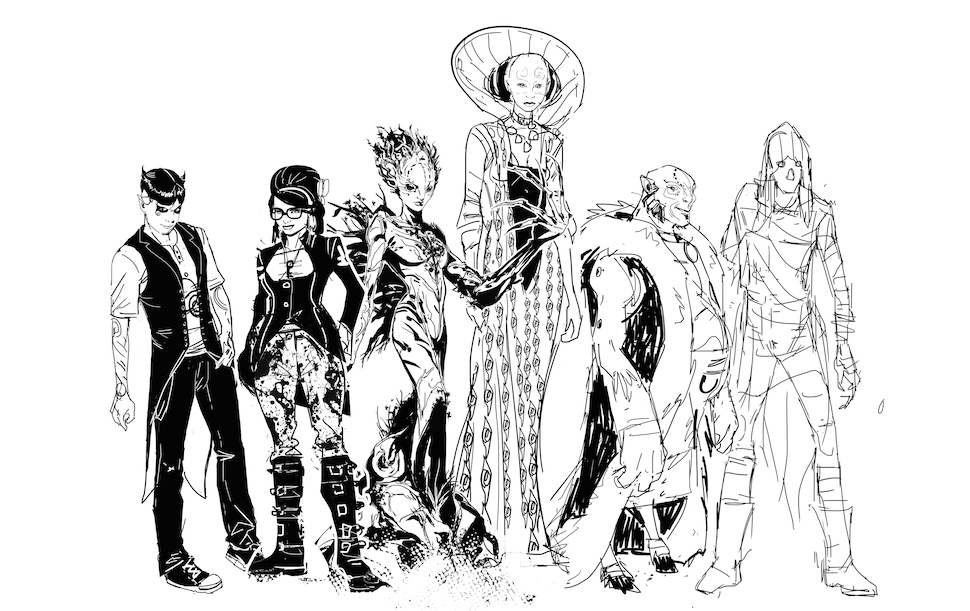 The cast of Klarion

Then Trevor sent a wild range of sketches, and we’d build from there. A few characters he nailed right out of the gate, like Piper, on the very first sketch, and others grew organically as we worked on the story.

The early world-building time on a new comic is so exciting, but also kinda scary, because you just want to get it right. We had very little time to world-build so the pressure was intense. Now that we’re working on Issue #2 and #3, it’s more about building character.

It’s difficult to do early interviews because I’m just bubbling over with spoilers, but let me just say that events that don’t happen till later in Issue #1, or sometimes don’t happen till later in the series, Trevor has made brilliant use of the panel borders on early pages as clues to future scenes. The first issue is so drenched in magic it’s a real immersion into a new mystical realm.

And Guy Major’s color work is fabulous. He’s using a muted palette that sets off the glow of the spell-casting beautifully. 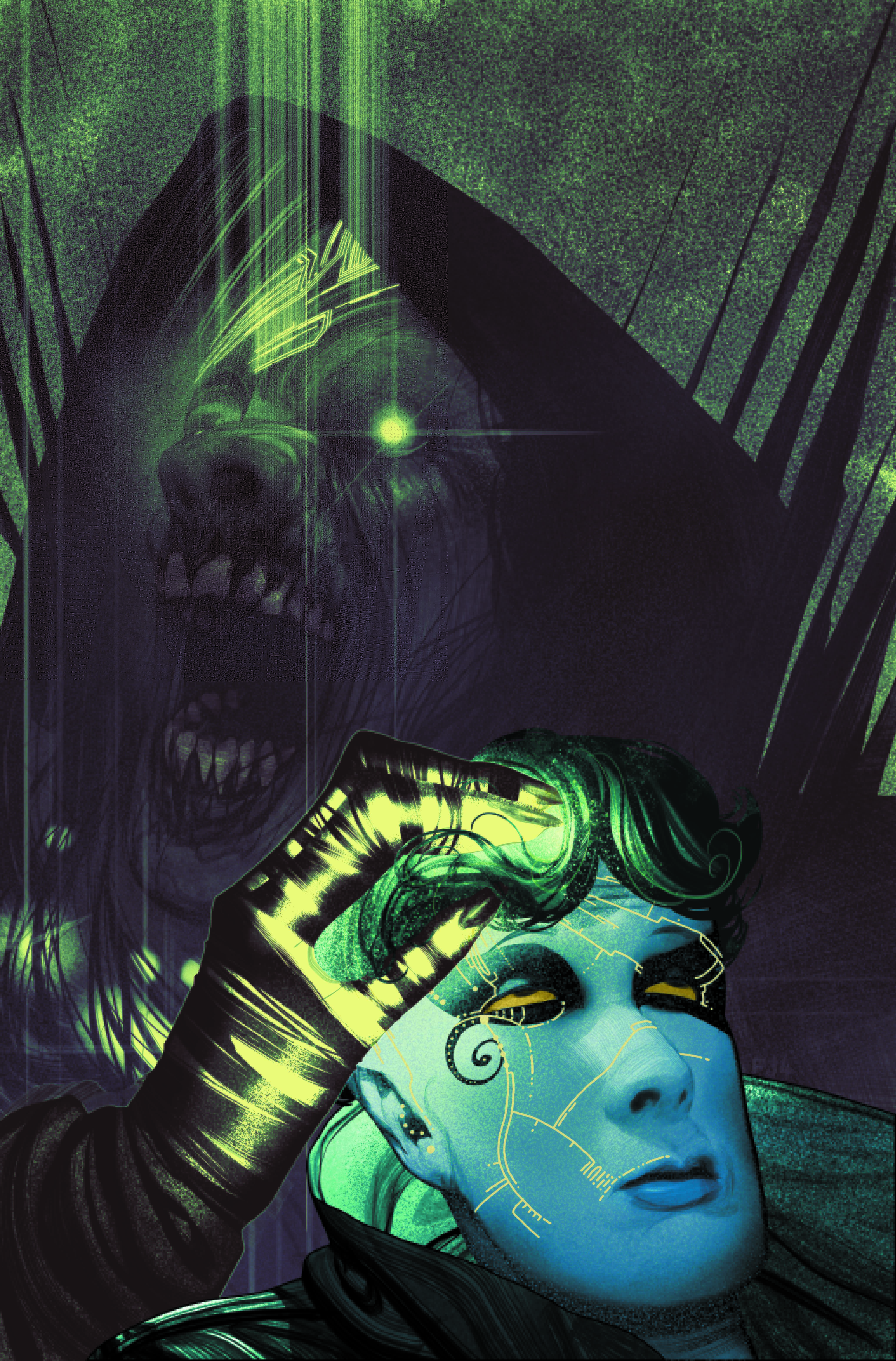 What can readers expect in the first arc — and how long will it be? What do people need to know coming in?

I don’t think readers need to know anything going in. We started from square one, Klarion’s arrival in New York City, and it’s clearly a subjective point-of-view: Klarion sees the magic. And yet, he is, perhaps, an unreliable narrator.

The reading experience will be richer for those that know Klarion’s history, as there are Easter eggs in the first issue that are there specifically for Klarion fans.

The first arc is six issues and introduces two dynamics. One is: Is technology saving or destroying the world? We take this to a very personal level: our intimate relationship with our tech. Klarion’s powers are pagan, and he hooks up with other pagan witches, but the rise of techwizardry is his first challenge. And yet, this idea is built on a simple coming-of-age tale, a familial setting, and a love story. The other dynamic is, can a community help change a bad seed?

Klarion’s first impulses aren’t heroic, and his possibly evil nature is at the core of the series. Klarion finds selfish reasons to act in heroic ways. Whether he screws all that up or not is the question. 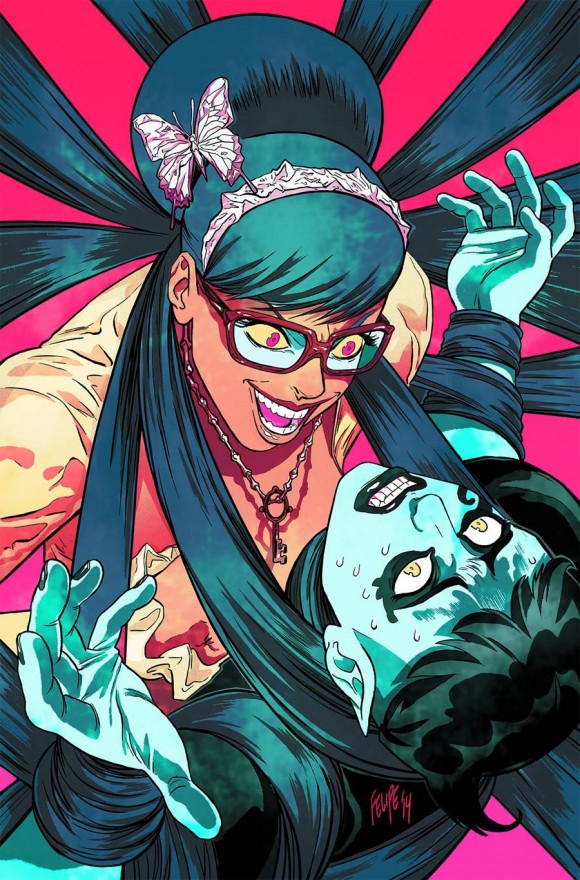 Klarion’s not really a guaranteed seller like, say, Batman or Green Lantern. What is it you want to tell readers to get them charged up for this book?

Trevor, Guy, Harvey and I have worked so hard to make this first issue a full immersion experience into a dark, exciting mystical universe unlike any other. The core of the book is Klarion, and the innate tension of, just how evil is he? There are two strong female characters, which is important to me.

This past year attending conventions, I was delighted to meet not just many female fans of Catwoman, but mothers and daughters reading the stories together. So although this is Klarion’s book, strong female storylines are important to me. And there will be plenty of pyrotechnic fights, and deep mysteries. Like going to an amusement park, this comic is part rollercoaster, part hell pit.

We really hope you take this ride with us. ​ 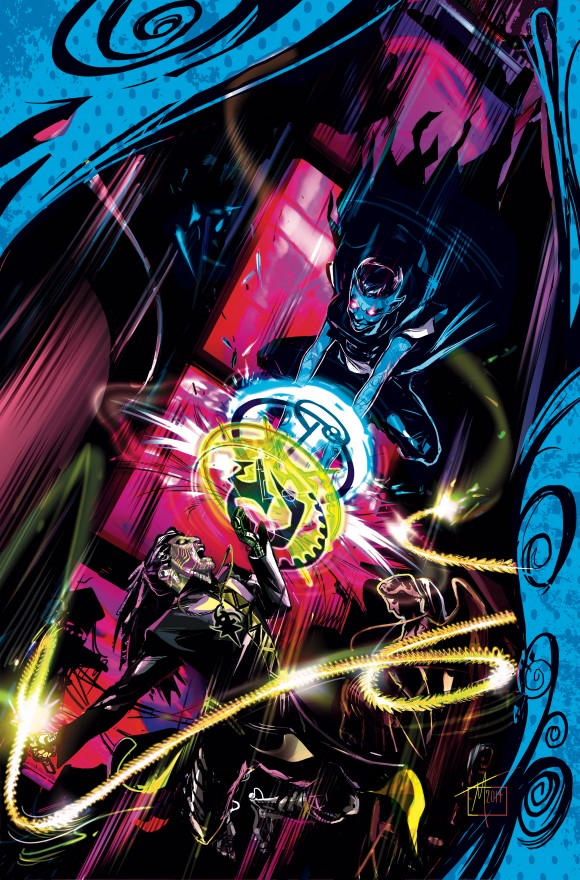 Dan Greenfield: How did you get this gig? Tell us how this all came about for you.

Trevor McCarthy: Well I was just wrapping up the Batwoman Annual and I got a voicemail from Rachel Gluckstern with something cool she thought I would be good for. I called her back and we began talking. She said it was a new series and Ann Nocenti was attached already, so of course I was immediately excited. Then she mentioned Klarion, and that kinda came out of left field for me as it was probably one of the last DC characters I was expecting to hear, but nonetheless I was still very intrigued.

What was your exposure to Klarion before this series?

I had done a small 10-page story with Klarion back about four years ago, written by Bryan Q. Miller, in the DC Halloween Special. That was the first time I had ever even heard of Klarion, and funny enough it was actually the first job I had at DC since leaving the comics industry for the advertising world back in 2004, but that’s another story (smiles).

Mike Marts sent me the Grant Morrison and Frazer Irving series for reference so I took a look at that before I started that story. Since then I noticed he’s become kinda popular, more in various animated forms by DC where I think he has had most of his mainstream exposure.

I always see one or two Klarions cosplaying at comic cons too so I know he’s got a small fan base out there. 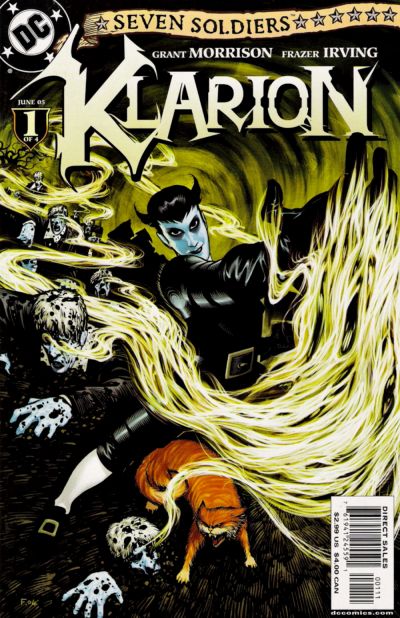 Describe how you and Annie Nocenti collaborate. I’m always curious about the interplay between writer and artist.

Ann is just AMAZING! It’s really fantastic working with her! She’s of the opinion that the art is up to the artist and I really respect that.

We talk story and ideas all the time, mostly through e-mail but we have no hesitation to get on the phone when we want. Ann’s really got my back and is so encouraging with my artistic direction.

That, coupled with this crazy freedom we’ve had from Harvey with Klarion, and it’s really allowed me to stretch out my mind and go as wild and trippy as I can with the designs in this book.

Klarion is as much a blank slate in the DCU as an established character can be, so there was so much opportunity there to do something cool and we have really tried to take advantage of that. Ann’s not afraid to paint with a big brush and I totally LOVE that! Hopefully all that is a recipe for some cool stories! 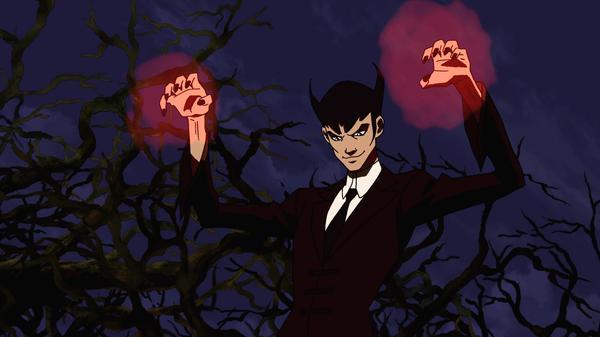 You’re working in DC’s occult world. What are some of the characters you hope you get to work on?

BLACK ADAM! Ha! — Sorry, those were the first words that came out when Annie and I had this discussion with Harvey back in May. Apparently he’s unavailable, though. Captain Marvel too, but I keep hope out. (Smiles)

Actually one of the major pieces of awesome we’ve had with Klarion is that EVERY character in the book, minus Klarion, we’ve had to create! It’s just been non-stop world-building since late May and so I’m kinda loving our characters right now and getting to know these guys better.

Eventually I’d love to get any of the DC magic-users in there — Demon, Spectre, Zatanna, Deadman, Constantine, Sandman, so many great ones. It’s the first time I’ve gotten to create so many characters all at once for a title, so for right now I’m absolutely loving fleshing my guys out!​