SPIDEY IN TRANSITION: Drugs, Six Arms — and One of His Worst Villains

Home » COMICS HISTORY » SPIDEY IN TRANSITION: Drugs, Six Arms — and One of His Worst Villains

THE SPIDER’S WEB: Don’t look now, but it’s the Gibbon!

My journey through Spider-Man’s early days has passed the century mark, and I’m as surprised as you are. This has been a blast, and I’m excited to keep going.

But we’ve hit some choppy waters. Not because things are bad — quite the opposite! But they are choppy. It feels like we’re falling between eras, really, as we enter the last fits and starts of Stan Lee’s run on the book and pass the baton to the next generation of writers and artists.

The quality is still great, but like I said — shaky. Lee finishes up his run with a kind of ho-hum “Spidey in England” story, as Peter tries to woo Gwen back, but closes out very strongly with the historic drug issues — #96-98, which feature Spidey’s best pal Harry Osborn dealing with addiction and a classic, Gil Kane-drawn battle with the Green Goblin. 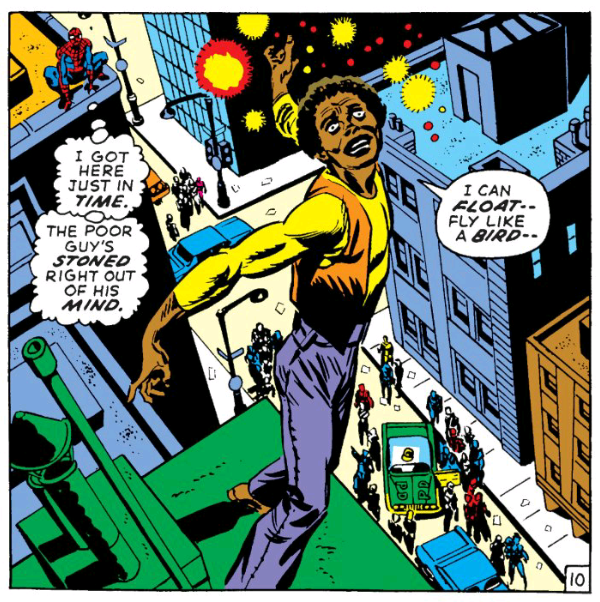 The prison riot issue that follows is a bit forgettable and feels too preachy (Spidey’s speech at the TV studio is rough reading!), but it’s decent enough. That leads into Amazing Spider-Man #100, by Lee and Gil Kane, where we get a nice recap of Spidey’s origin plus a return to his “Why am I even Spider-Man?” angst.

Now, back to my “choppy” comment: We get a taste of a more modern story and vibe as Roy Thomas steps in for the Morbius three-parter from #100-102 (for the last two, natch), which features the writer’s signature poetic style — with a conflicted, tormented villain and (gasp!) rolling subplots, like the Daily Bugle potentially shutting down.

The modern feel is propelled even further by Kane’s art, no longer smoothed over by the lush John Romita inks (not a complaint, as I love the Kane/Romita blend). Instead, the penciller is paired with Frank Giacoia, allowing Kane’s own quirks to shine through a bit more. 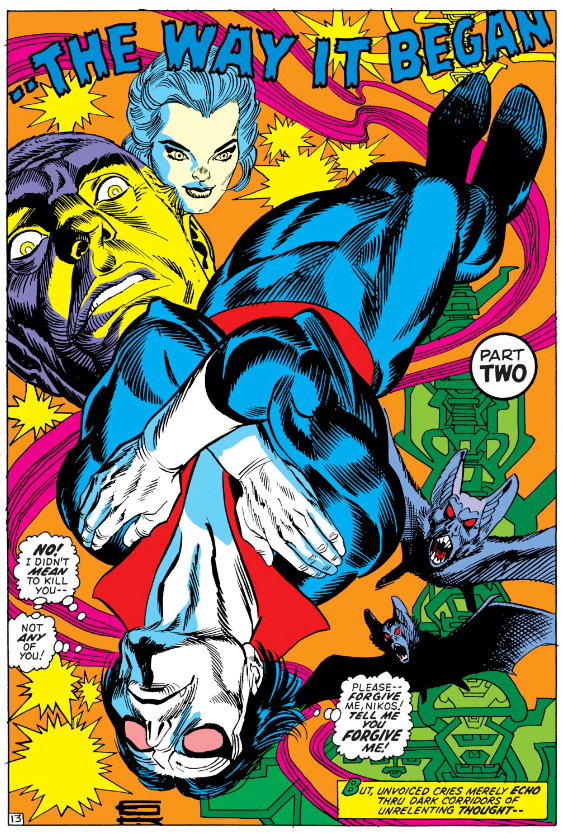 Thomas follows the debut of Morbius with a fun Savage Land tale featuring Kraven and Ka-Zar and it feels like the book was prepping to enter a new era, with Stan, Steve Ditko and Romita having laid the foundation. Then, something weird happens: I realize that back then “runs” were different, and Stan was probably writing a million titles and wasn’t totally set on leaving Amazing Spider-Man, so… he comes back! First with Kane penciling, which is fun — but feels a bit retro?

We get another Spider-Slayer story, which doesn’t add much new to the villain, or even to J. Jonah Jameson, who once again hires him to try and destroy Spider-Man. Then, Romita comes back, and it feels like we’re back to the old times. But as much as I love Lee and Romita together, getting a taste for what was next with Thomas/Kane made it jarring to go back, especially when some of the things Thomas set up — like the Bugle subplot — are shrugged off.

I think Spidey literally says “Well, the Bugle is okay now with those Kraven stories upping circulation!” That’s not how newspapers work, Spidey! Quibbles, quibbles. Still, the issues are fun — we have a cool Dr. Strange guest spot, a somewhat heavy-handed Flash Thompson Vietnam story and then, in my eyes, the nadir of the Stan Lee run — the introduction of the Gibbon! 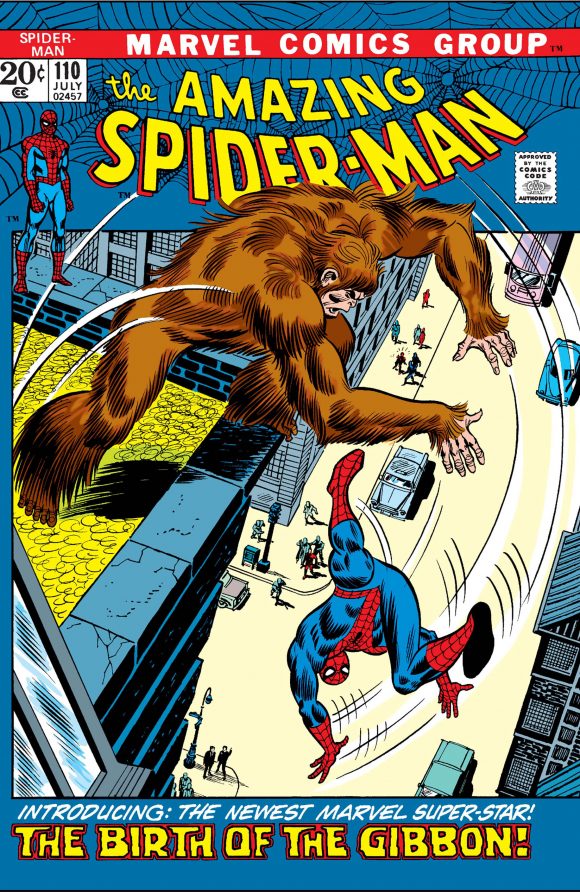 Who’s the Gibbon? Well, if Spidey has A, B, C and D-List villains, the Gibbon is close to the bottom of the list. It almost felt like Lee was trying to riff off Morbius, and create a bit of an anti-hero, but it didn’t quite work. Spidey’s reaction — to laugh the guy away — also feels a bit forced/mean and not like Spider-Man. Then, in another beat that’s blatantly ignoring what’d come before (namely, a death!), Kraven returns to mentor Gibbon. Gerry Conway swoops in for the final issue of the three-part story and, I think, kind of saves it by adding some pathos to Kraven’s obsession (and harkening back to his earlier battle with Spider-Man, a handful of issues before). It saves a really lackluster trio of stories that still manage to look great.

Up next we enter another transitional period — as Gerry Conway steps in as the semi-regular writer with Romita on art, so we’ll hopefully get a nice blend of the classic Spidey look with a more modern (for the time) story, as we build toward the ominous Amazing Spider-Man #121, and the eventual, legendary Conway/Andru run.

— Why does Pete have to be such a jerk to Gwen? There are times — like when he wakes up with six arms in #100! — that we realize he’s under a ton of pressure, but even then, at least finesse it, man. He tries to bail out of a date and then leaves her wondering if he just broke up with her. I think it’s a product of the times, in a way — the stories move so fast, and everyone’s emotions are so intense, probably because you’re not sure how locked in your readership is, so you have to amp the drama up as much as possible. It can be a bit jarring, though. 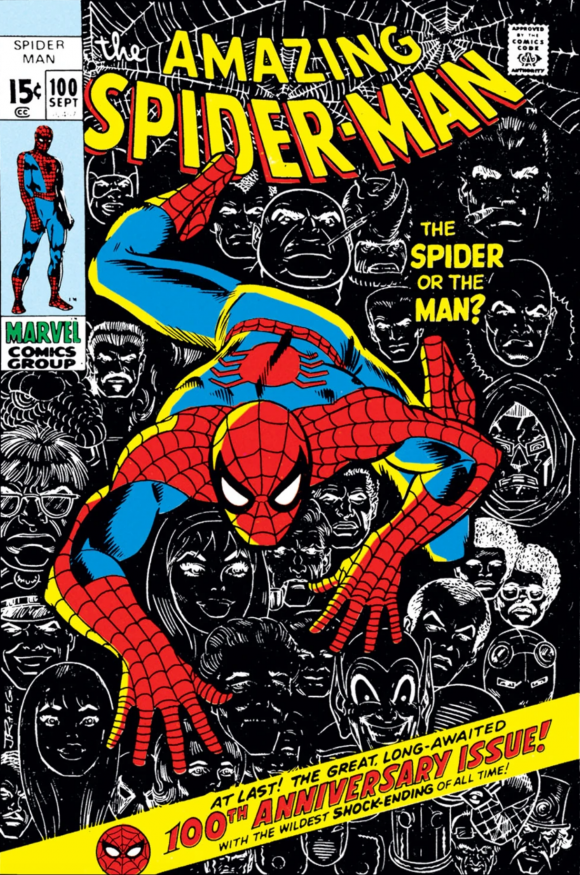 — I love the slow evolution of JJJ, and a big part of it is the addition of Robbie Robertson to the cast, who serves as Jonah’s conscience of sorts — allowing us to discover Jonah as a journalist first, obsessive Spidey-hater second. Most of the time, at least.

— The Gibbon is the worst.

— When did Aunt May get an apartment in Manhattan? I’m not sure when this was determined? I recall a vague mention that Anna Watson moved away, but I took that to mean May stayed in the house… anyone know when this happened? A cursory search came up blank.

— I should note that even the issues that felt a bit flat for me are still great — you can’t go wrong with Lee/Romita. 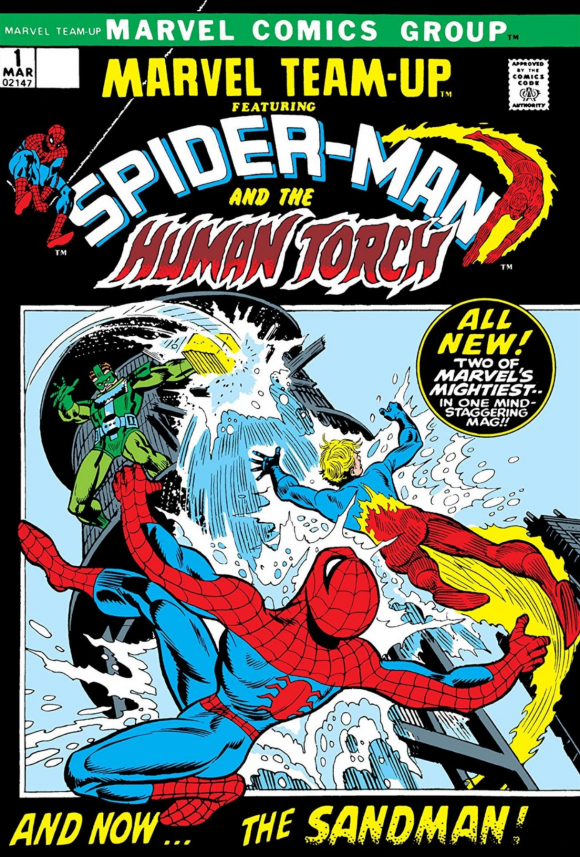 — For those keeping score, I realize that the second Spidey title, Marvel Team-Up, launched around this time — after ASM #99, if you want to be technical. I’m going to be a bit agnostic about it, though — I’ll read a few here and there as a palate-cleanser from the main Amazing book. I’m about three into the main MTU book — which featured the return of the Sandman, who started off as a Spidey villain but then shifted to the FF for most of the ’60s — but I stopped once Morbius showed up as I hadn’t finished his debut. That said, if this is still going when we hit the launch of Peter Parker, the Spectacular Spider-Man, I’ll have some decisions to make! My guess is I’ll alternate Masterworks at that point…