TOYHEM: Sometimes our favorites are the most basic things…

Walt Grogan is one of the biggest original Captain Marvel fans around and through his popular Marvel Family Web Facebook group, he has anointed today Shazam! Day. Why? Because so many heroes have “days” now, the Big Red Cheese deserves one too. 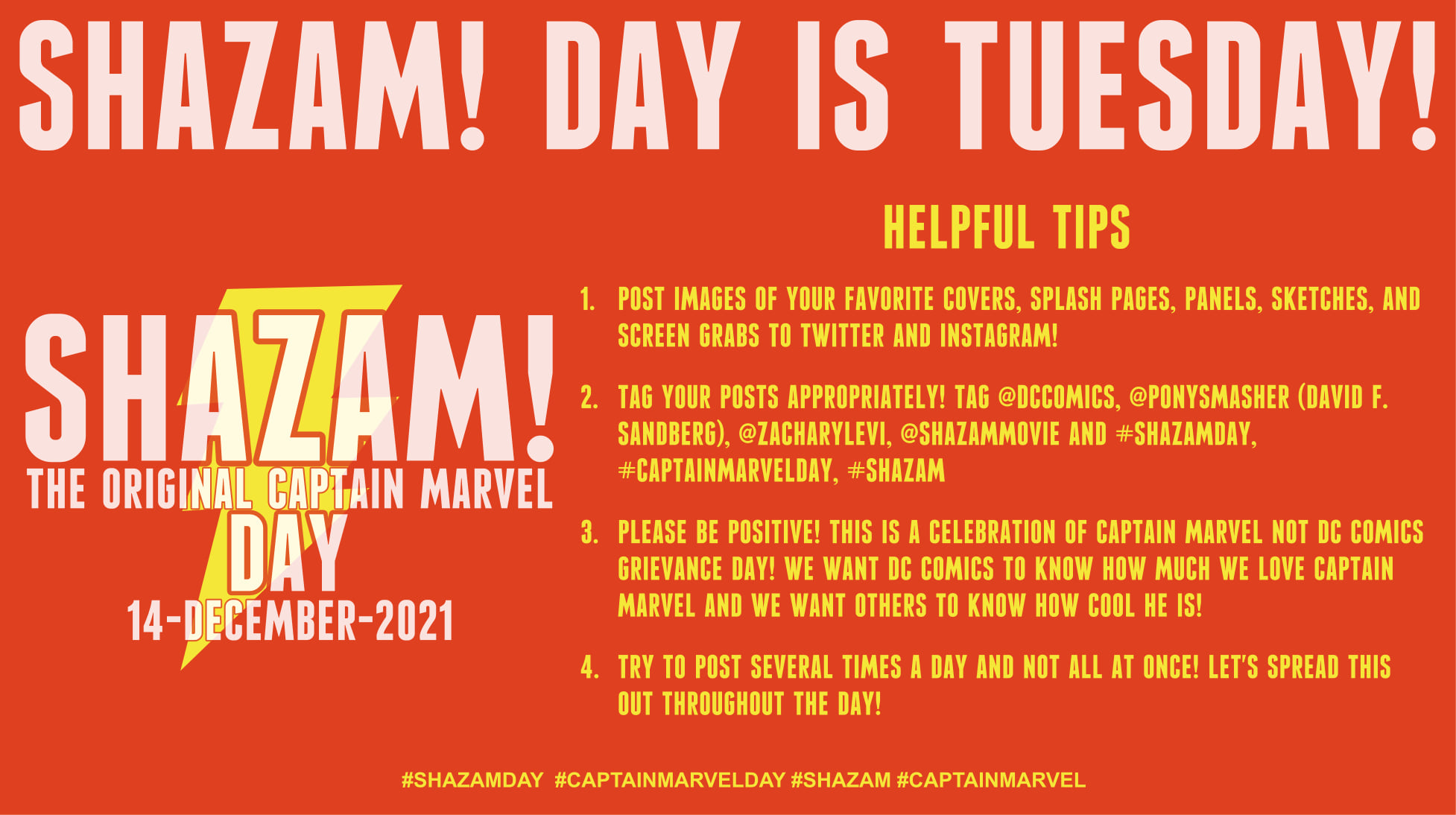 With that in mind — and with TOYHEM in full swing — I asked Walt to pick his fave Captain Marvel toy and was happily surprised by his charming, offbeat pick.

Back in the mid ’90s to early 2000s, my go-to Warner Bros. Store was in Water Tower Place in Chicago on the so-called “Magnificent Mile.” They had an awesome superhero section that contained a great number of toys, collectibles and shirts. The store also had a fine arts section brimming with many masterpieces by Alex Ross and other artists.

As a huge DC fan, the store was like a second home to me as I visited often at lunchtime. In the DC section, shoppers were greeted by large busts of the Justice League members hanging high on the wall and as a huge fan of the JLA, I always stopped to admire them.

While I definitely picked up many Justice League items (I still have and use my Flash and Green Lantern tumblers), I was always on the lookout for Captain Marvel tchotchkes (Shazam! for you youngsters). Sadly, they were few and far between!

I was able to purchase the Shazam! collectible plate designed and painted by Alex Ross that many of you may know featured Alex’s art agent Sal Abbinanti as the model. Alex even held a signing at the Oak Brook WB store (or perhaps it was Old Orchard), so my plate is signed as well. 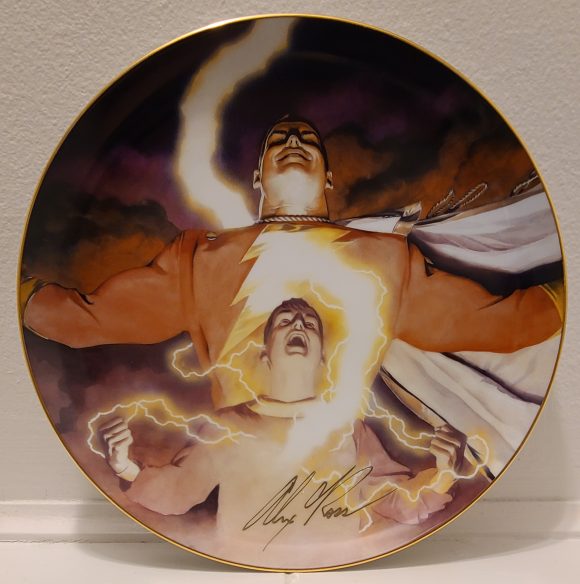 But that was pretty much it for Captain Marvel items at the store except for one other.

A lot of stores have a place near the register where they display items for impulse buying. The Warner Bros. Store was no different. Maybe you needed a quick gift for someone, or you were shopping with your children or a niece or nephew, or maybe you were >gasp< an adult collector!

Well, the store had a display of stuffed superhero, super-villain and Hanna-Barbera and Looney Tunes characters. And over the course of time, I bought an Atom Ant, Martian Manhunter, as well as two of my favorites, Frankenstein Jr. and Space Ghost.

But I was always a little disappointed because there was just one character that I had always hoped I would find there. And then one day… SHA-BOOM! … there he was… The World’s Mightiest Mortal, himself! 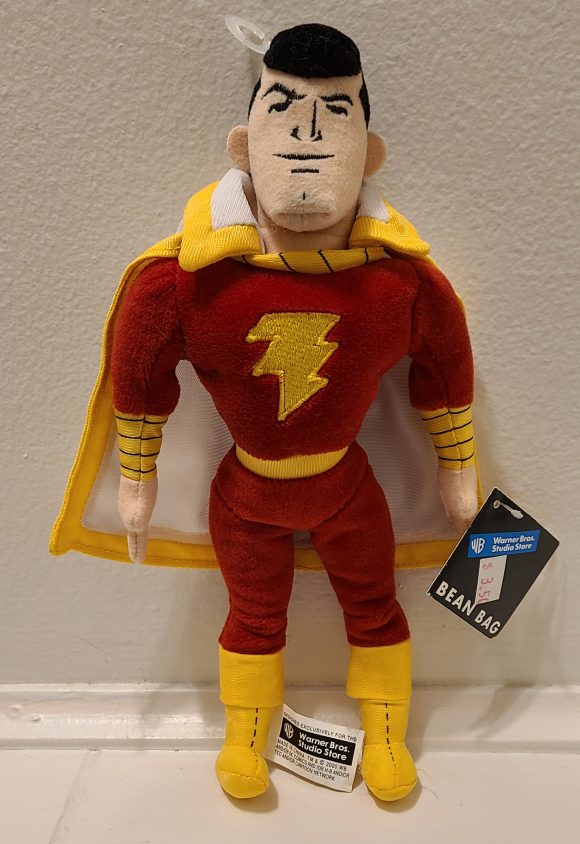 They had finally done it! And he was magnificent in all his red and yellow glory! Heck, he even had the correct number of rows on his wrist bands. He also had seams on his boots! The only thing that was missing were the flower appliqués on his cape but maybe that would have blown the budget on the toy! 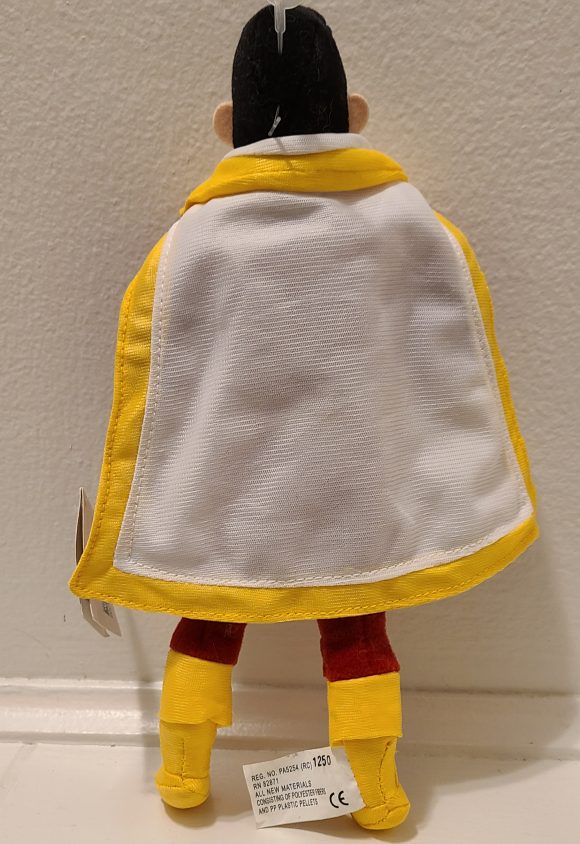 But I really dig his face. Does it look like Cap’s face? No, not really and I’m not complaining. It has more in common with Jay Ward’s 1967 George of the Jungle (and kinda like the actor Nathan Fillion, now that I look at it more closely) than C.C. Beck’s Big Red Cheese. But he’s smiling! And that’s something that a lot of artists (and writers, for that matter) forget about Cap! He’s a friendly, happy character and there’s not too many of those left. 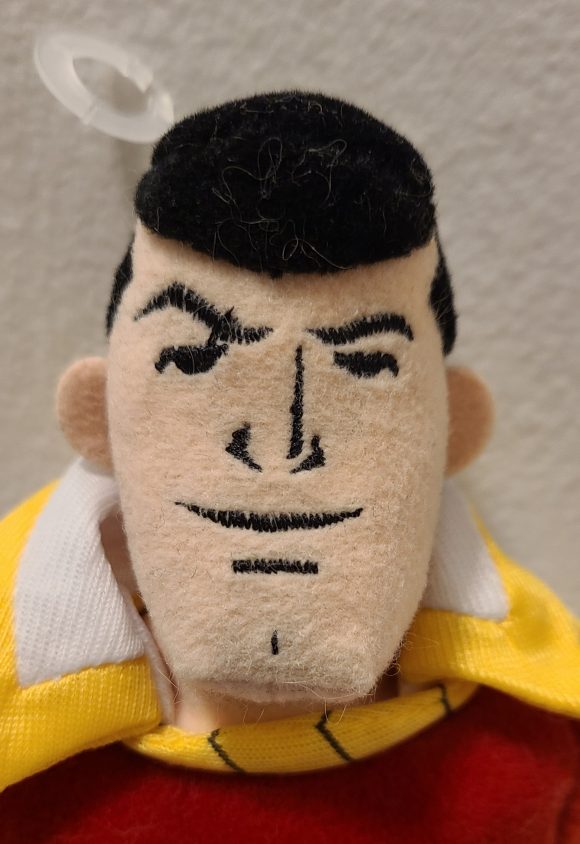 And he’s got the cleft chin and expressive eyebrows, too! Although they could have been a little thicker — but thread costs money!

I’ve never clipped the plastic peg hook off of him, so I can hang him anywhere and he’s flying. For one of the cheapest Cap toys I’ve ever bought (it was only $3.50 back in the day), he was a great buy.

It’s hard to believe that this mostly under-the-radar toy is over 20 years old! Cap has had quite a few action figures and statues over the years and I have pretty much all of them since he reappeared at DC Comics in the early ’70s, but this one really sings to me!